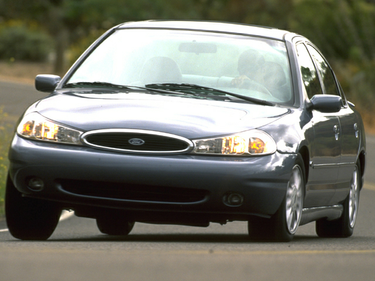 October 7, 2006
By ford freak from Vermont
Owns this car

Bought the vehicle 1 year old in 2000. It's a 1999 Contour SE. It was a used rental car (if I didn't know this, I never would've guessed due to the great reliability). It is equipped with three options, automatic, ABS, and 15in 6 spoke alloy wheels. The inline-four cylinder engine has little power, but decent for crusing and FLAT areas. At times, if you let off the accelerator in the right place, you can feel the entire vehicle shake (this is because of the unimpressive four-speed auto transmission preformance). The chassis isn't that strong, as is reflected over moderate-severe bumps. All that aside, this vehicle is great fun and surprisingly agile through corners. The steering is precise, nicely weighted, and has good tracking. The fuel economy is a nice surprise as well. I average in the higher 20s in a city/highway mix! Be sure to get a Contour with anti-lock brakes. Speaking of brakes, while they're nothing to brag about, but you get a short travel, they're relativly linear, and they are responsive. The front cloth/velour bucket seats are comfertable, and the low cowl make seeing the road easy. The interior design is pleasent, but the "foam" top dash warped. The rear seat is also comfortable, but legroom is tight. This is a great sporty, reliable, good-on-gas economy car! Recommendation: If you're looking for a little car with a relativly roomy front seat, won't need the back eccept for occational use, want to have a little fun, and be safe (all Contours have dual front air bags, and ABS is optional, Traction control is on some as well), then the Contour may fit your needs well.

PROBLEMS: So far, struts have gone, headlights became uneven, part of back of rear-seat popped out, trunk stuck shut trunk latch inside the car sticks, a/c doesn't work, driver's side key lock won't work, passangers key-lock sticks sometimes, passanger seat control panal fell off so you have to fit it back together to put the seat up or down, windows are slightly off track, part of the rear window defroster has stopped working, ABS motor comes on when to full potential when it shouldn't and doesn't when it should usually, the fuel pump went, and the check engine light is almost always on. The strange thing is that the car has been taken very good car of, cleaned all the time and oil changed when it should, gas tank usually above 1/2 tank, very well maintenenced, and probably over 75% of the miles we put on the car are highway miles. We were lucky that the problems were usually spread out somewhat. EXTERIOR/INTERIOR: Good side, car looks good, scratches on it usually stay surface scratches, and rust isn't a problem. Inside, the seats and design are very confortable, even with cloth seats, it is a confortable seat to be in, the only problem is that the head rests feel like wood. Also, its either confortable front seat leg room or rear-seat leg room, not room enough for both. The overall design is good, easy accessibility to things, the power window passanger lock only works for the rear passangers, not the front passanger, which is a problem with kids that like to play with the windows. The power locks are completely power, meaning that even on the door, where if you need to manually open the door lock if the car electricity fails, is power, you press on it, the power takes over and moves it for you, so you can't manually unlock or lock the locks, so if you are inside the car and it is locked and the electricity fails, you can't unlock the doors. Also, for the driver and front passenger, if the door is locked, and you go to open the door, the lock automatically unlocks for you, a very big problem with kids that need to sit in the front seat as there aren't any kid locks in the front seat. The car was purchased used, so it is possible that the car wasn't taken car of before we purchased it, and that usually, these problems wouldn't exist. Overall, I wouldn't purchase this car if I could go back in time.

We bought this car when it was one year old. It has been a great car for our family of four. We have had very few problems that required us to go in to have it fixed. It now has almost 80,000 miles on it. We have been quite consistant with maintenance. The only problem we have had was that at about 70,000 miles the "check engine" light came on and we have had it in on the "computer" at the mechanic and he replaced the thermostat and some other little part. It came on again and they can't figure out why. But, other than that, I think it has been about the best, most reliable car we have ever had. A feature that I wish it had was a way to make the air conditioning not just to go the vents but to the floor also.