Our 2002 Hummer H1 trim comparison will help you decide.

SOUTH BEND, Ind.–When H1 owners pay $5,200 to attend the five-day Hummer Driving Academy, instructors like to tell them there’s a surprise around every corner.

The real surprise to ordinary consumers may be that it takes an intense course to learn how to drive off-road in the $100,000 civilian cousin of the military Humvee.

For the Hummer owners who attended the April session, the surprises included a trip to the sand dunes in Silver Lake, Michigan, to practice desert-style driving, a picnic lunch of Beef Wellington set out on white linen in the middle of a forest, and sharing s’mores around a campfire at the Hummer test track in Indiana with members of the Army’s Special Operations forces.

That unusual night-time treat happened spontaneously because the troops were practicing their maneuvers alongside the Hummer students.

In short, Hummer Driving Academy is an elite playground for lovers of the squat and intimidating sport-utility vehicle.

To Linda Marasciullo, a 42-year-old retired office manager from Parker, Colo., the experience had its “white knuckles” moments.

Marasciullo attended the academy with her husband Tim, 42, a plumber.

Marasciullo’s biggest challenge was getting a 7,000-pound H1 hardtop wagon up what the Hummer instructors called “Competition Hill” at the Michigan sand dunes.

With 23-year-old Hummer instructor Trevor Stone in the passenger’s seat, Marasciullo tried six times to get the H1 past the crest of the steep dune.

Each time, the wheels bogged down in soft sand. Then it was a dizzying backwards ride down the dune for another attempt.

“This is really tough,” Marasciullo said. “I don’t like this. Please don’t be offended if I swear.”

“You were fighting the ruts,” Stone replied. “Pick your line and steer straight the whole way. And don’t worry so much. I never even made it up this dune my first day out here.”

Marasciullo floored the H1 and on the seventh try made it over. In fact, she kept flooring it over the second dune and managed to get the Hummer airborne.

Hummer instructors in nearby H1s rolled down their windows, flapped their arms and made clucking noises.

“Well, you got some frequent-flier miles on that one,” Stone said.

In truth, just an hour before, Tim Bonadies, Hummer manager of training, had warned the students against just such a maneuver. Using the sand at his feet as an informal drawing board, Bonadies traced out the route and lectured the seven students standing around him.

“You need enough momentum, but not so much momentum that the front wheels come off the ground,” Bonadies warned. “You’ve got 7,000 pounds of force overcoming the load. I’ve seen 7,000 pounds become airborne. You could go nose down and flip right over the top. It could be bad.

“I don’t mean to instill fear in you, but you have t o respect that amount of weight and power. Read the terrain and react accordingly.”

If the Hummer instructors sound tough, it’s a calculated image. In fact, Bonadies likes to hire ex-military men, like Steven Spengler, to teach the owners.

Spengler, 28, a former Marine sergeant, still looks the part, wearing a brush cut, combat boots and beige camouflage pants. He barks orders at a group of middle-aged men in his H1 on the dunes.

“He says he wasn’t a drill sergeant, but he certainly has it in his blood,” said Jake Strzelewicz, 44, owner of an Oxford, Massachusetts concrete company who traded in two Rolls Royces to buy a $90,000 2000 H1 wagon.

Still, academy students find themselves on the receiving end of lots of pampering.

After one tough day of off-roading on the 320-acre AM General test track here, over rock cliffs and swamps, Hummer owners were treated to a fancy meal of steak and oysters Rockefeller.

The preferred cocktail on this evening is, of course, a Hummer. And students come away with armloads of Hummer souvenirs, including jackets, leather gloves, shirts, caps and a $395 global positioning system — critical for navigating your way to civilization in some off-roading venues.

Hummer students practiced locating the nearest Dairy Queen and finding golf balls hidden on the test track by instructors by punching in coordinates on their GPS systems.

They also had several hours of classroom instruction, including a session on survival skills and some basic H1 mechanical instruction.

Randy Foutch, H1 product manager and H2 brand analyst for GM, said the company is considering holding a modified academy for owners of the H2 when it debuts this summer.

In 1999, AM General and GM signed an agreement to allow GM to market the Hummer brand, including the new generation of Hummers that will be built by AM General.

Such a course should be well-received, given the enthusiasm generated by the Hummer Academy students.

“This course is terrific,” said Mitch Schrudder, 56, a West Chester, Ohio consultant who owns a $120,000 H1 outfitted with 45 accessories, including three TVs. “I learned how to keep from tearing up my Hummer.”

At the closing exercises, called the Hummer Olympics, Schrudder got behind the wheel of an H1 at the start of a serpentine course.

An instructor blindfolded him and told his front-seat passenger Bob Brack, another H1 owner, to holler out instructions.

To make the exercise doubly hard, raw eggs were set on top of the orange cones outlining the course. The point: Driver and passengers must learn how to effectively communicate if they want to survive in the wild.

“Hey, guys,” instructor Stone said. “How do you like your eggs?”

The only thing lacking is a mounted M60. Great for the murder capital of the US. The best defense is a godd offence and this comes through.

Rating breakdown (out of 5):
2 people out of 4 found this review helpful. Did you?
Show full review
3.9

Great Truck, built to last over a million miles. Runs on veggi oil. When you live 5 min from work, you Wont have to buy another car for 10, 20 years. Time to get Smart and forget the rest.

Rating breakdown (out of 5):
2 people out of 3 found this review helpful. Did you?
Show full review
1.0

Rating breakdown (out of 5):
4 people out of 15 found this review helpful. Did you?
Show full review
See all 5 consumer reviews

All model years for the Hummer H1 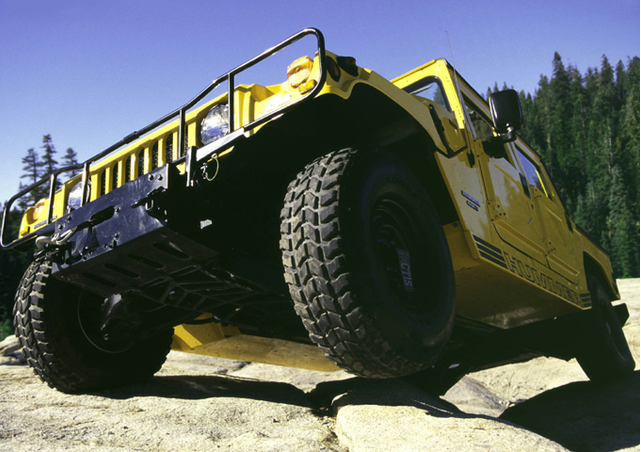 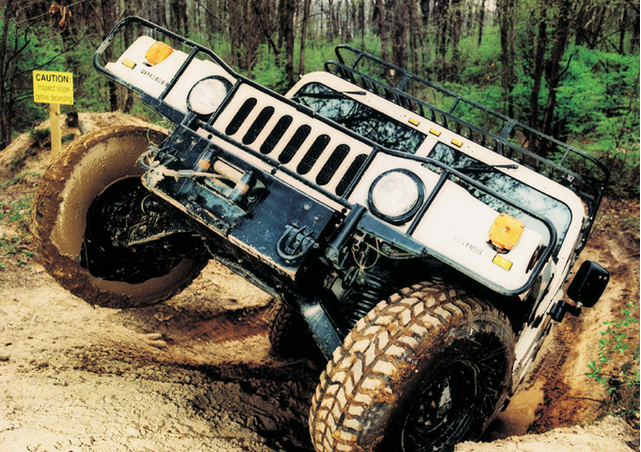 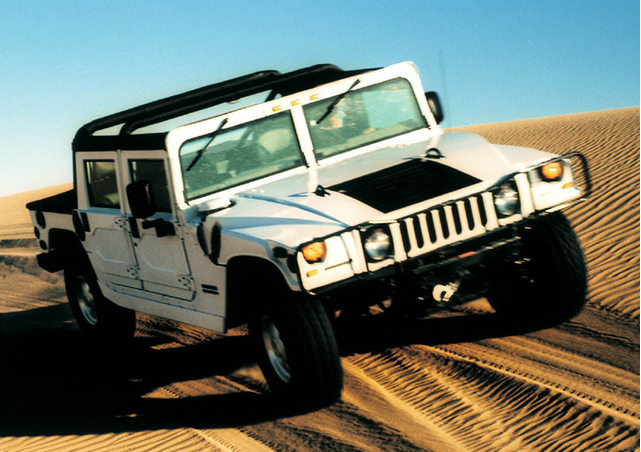 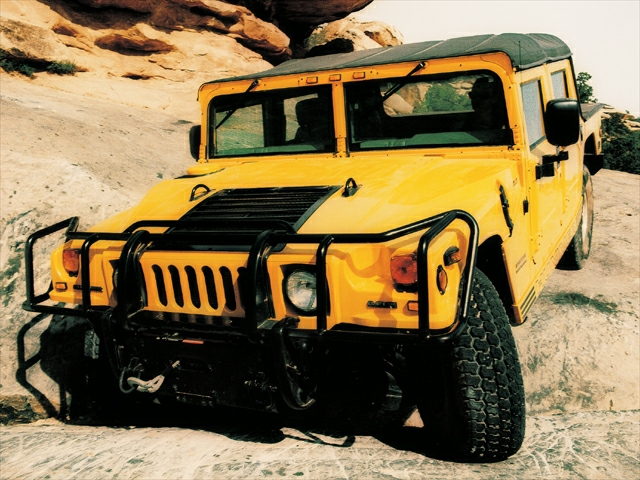 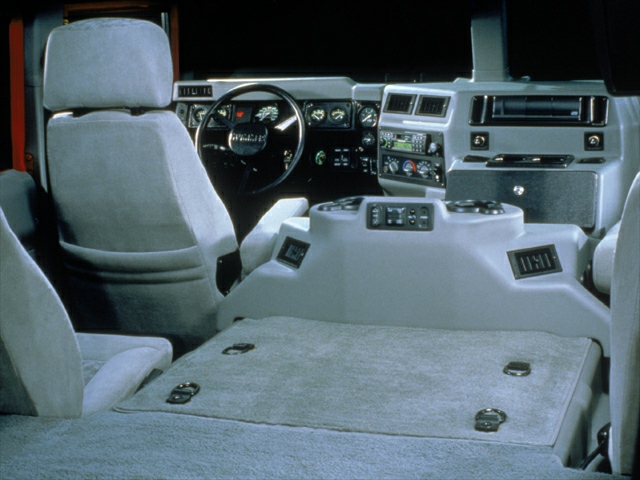