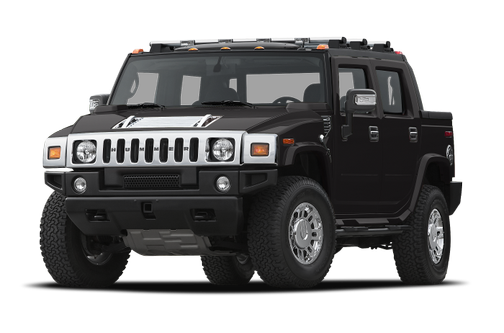 Our 2009 Hummer H2 trim comparison will help you decide.

Editor’s note: This review was written in July 2008 about the 2008 Hummer H2. Little of substance has changed with this year’s model. To see what’s new for 2009, click here, or check out a side-by-side comparison of the two model years.

Rarely has a brand fallen from grace as quickly as GM’s Hummer nameplate has. It was only a few years ago that Hummer was GM’s very own version of the U.S. Mint — a veritable money machine for the automaker, which was riding the popularity of large luxury SUVs. Fast-forward a few years to 2008 and things have changed dramatically. Full-year Hummer sales for 2008 will likely be less than half what they were in 2006 when the brand sold, according to Automotive News, 71,524 vehicles. GM announced last month that it is considering selling the brand entirely. The goose, it appears, has stopped laying golden eggs.

This is the environment that the redesigned 2008 Hummer H2 faces today. It receives a new drivetrain that is more powerful and, according to Hummer, more efficient. The SUV’s cabin has also been overhauled, and more standard safety features are present. These changes are all well and good, but they can’t change what the H2 is: a large, thirsty SUV that’s a symbol of American excess at a time when more and more consumers are looking for ways to make the cars they drive less excessive and more efficient.

Styling
Love it or hate it, the H2 is an amazing example of the power of the 90-degree angle in car design; there’s hardly an arcing curve anywhere on it. The short front end features Hummer’s traditional seven-slot grille that’s set high off the ground with the rest of the body, which, along with short front and rear overhangs, enhances the SUV’s offroad prowess.

My test vehicle was equipped with the Ultra Marine package that includes an interesting deep green paint color that, in certain lights, changes to purple. It’s not the kind of color you’d expect to see on a tough-looking SUV like the H2, but it works well. (See a side-by-side comparison with the 2007 model.)

Ride & Handling
If you’re considering an H2 you’re probably well aware that you’re getting a full-size body-on-frame SUV. With this design come certain driving characteristics, like noticeable dive when braking. The ride is firm in general, and the H2 resists body roll fairly well when you consider its size, though part of that may be due to the fact that you reflexively slow down significantly for tight turns.

Once you get accustomed to the H2’s size, it’s actually pretty easy to drive. The steering is rather precise for a large vehicle, and the generous power assist means your arms won’t have to work too hard. Even when driving in a narrow lane, it isn’t hard to keep the H2 between the lines, and with the high driving position your view forward is unobstructed most of the time. This can’t be said of the people behind you; there were times when I could only see the very top of the roof of the car right behind me.

The amount of cabin shudder in the H2 when traveling on rough pavement was a little disappointing. I noticed similar shudder in the H2’s smaller sibling — the H3 — but it’s not an issue in many other SUVs. Once you get to about 50 mph, wind noise starts to intrude on the cabin as air works its way around the H2’s angular surfaces.

Maneuverability
One of the biggest challenges when driving the H2 is backing it up; rear visibility is especially poor thanks to a short rear window and the full-size spare tire mounted on the back of the SUV. If it weren’t for the optional backup camera, reversing the vehicle would have been more difficult than it already was, as well as potentially dangerous; if a small child were standing behind the H2 it would have been hard to see him at all. A backup camera is so important in this type of vehicle that it should be standard equipment and not an option, albeit a relatively affordable one at $890 when you choose the rearview mirror-mounted system. For much of my travels I avoided parking in spaces where I would have to back up, instead opting for ones I could pull through.

Going & Stopping
The H2’s V-8 engine is responsive and doesn’t feel heavily taxed during normal driving by the SUV’s substantial 6,614-pound curb weight. The V-8 doesn’t make the H2 feel quick, however, which is telling when you consider that the 6.2-liter V-8, which is new for 2008, makes 393 horsepower and 415 pounds-feet of torque. The H2 can now tow up to 8,200 pounds and comes with a standard Class III trailer hitch.

Also new is the six-speed automatic transmission that teams with the V-8. Its shifts are smooth most of the time, but it did make a harsh “thunk” when kicking down once and did so when coasting, too, albeit not as severely. The transmission includes a manual mode and shift buttons on the left side of the steering wheel.

Hummer says this new, more-powerful drivetrain is more efficient than the one in the previous H2, but it’s difficult to say how much because the H2 isn’t subject to the EPA’s fuel economy tests, the results of which appear on the window sticker of most cars. Because of its 8,600-pound gross vehicle weight rating, it’s considered a heavy-duty vehicle by the agency, and is thus exempt. I averaged slightly less than 10 mpg in mostly stop-and-go city traffic with a little driving on the highway. More steady-cruise highway driving would likely improve your gas mileage, but I wouldn’t expect to get out of the low teens in mixed driving.

As mentioned, you can feel the nose of the H2 dip even during moderate braking, but the brake pedal offers good linearity, and the all-disc antilock brakes provide adequate stopping power. It’s wise not to follow the car ahead too closely because the H2 will use up some road when stopping, but that’s not different from many large SUVs.

The Inside
As it’s doing with many of its other newer models, GM has given the H2 a redesigned cabin that’s more befitting of its luxury-vehicle price tag. The new dashboard features nice, soft-touch materials. It also has simulated metal trim that does a decent job looking like the real thing, and overall fit and finish are good.

Like the exterior, some elements of the cabin are oversized. The gear selector looks like the throttle out of a commercial airliner, but it’s made of aluminum and features details like real Allen screws, which give it an industrial look.

The H2 also comes with new power heated seats that are finished in standard leather upholstery. The bottom and backrest cushions are sizable, so they should be able to accommodate different-sized drivers.

Passengers in the second row enjoy good legroom and soft seat cushions, but the bench’s backrest is rather upright and doesn’t recline at all to offer a more relaxed seating position. Though the seats have an older folding design that requires you first flip forward the bottom cushion before folding down the backrest, it’s easy to do and results in an extended load floor that’s flat with the cargo area. With the second row folded, the 40-cubic-foot cargo area more than doubles to 86.6 cubic feet.

If you opt for the $860 removable third-row seat to increase the H2’s seating capacity from five to seven, be advised that it’s only suitable for shorter passengers; Hummer really skimps on legroom back here, and there’s no way to improve it, as the second row doesn’t slide forward. Cargo room is nearly nonexistent when the third row is in use — there’s only 5.8 cubic feet of space, which is about the same amount you’d get in a Mini Cooper — and the removable seat sections themselves are pretty heavy and cumbersome.

Safety
As of publication, the H2 hadn’t been crash-tested by the Insurance Institute for Highway Safety; as a heavy-duty model, it likely never will be. It has, however, gained two important standard safety features for 2008: side curtain airbags for all rows of seats and an electronic stability system.

H2 in the Market
I’ve driven my share of gas-guzzling vehicles, but none with as much of a reputation for thirstiness as the H2. It didn’t help that during my time with Hummer’s largest model the national average for a gallon of gas was above $4 and the topic of the day — day after day — was gas prices. All in all, I was notably apprehensive about what the H2 said about me to others on the road when driving this SUV, and that’s a potential problem for Hummer if prospective customers feel the same way. Fortunately, I didn’t get the finger from anyone, and one woman who stopped me actually said it was “cute.” Maybe there’s more love out there for the H2 than I think.

Still, Hummer’s image doesn’t conform with the current national conscience, and that’s bound to make people who can afford a luxury SUV like this — mine had an as-tested price of $69,315 — reconsider a purchase they might not have hesitated to make when gas prices were lower. Instead, those people might look for another luxury model, like the Mercedes-Benz GL450 or Land Rover Range Rover Sport, that might get a little better gas mileage, but, more important, won’t draw as much flak.

If they still made them I would buy this vehicle again. Built to last. Lots of room. Was built with every luxury available on a vehicle.

Amazing in the snow

I have owned this H2 for 7 years and it has 81,000 miles on it and has never had anything go wrong. I love the way it drives and in the snow here it is second to none. On the highway it is a very smooth riding vehicle. I have done four cross countries of 2000 miles or more roundtrip and averaged 13 mpg in luxury comfort. I have had to replace the front windshield twice from rocks on unpaved roads. I love this car and will never sell it. We get 7 months of snow here and mud for another month and the H2 has performed flawlessly.

I absolutely love my 09 hummer h2 sut. It has not had any problems in 90,000 miles. It is a blast to drive and u do it in comfort. All I can say is the perfect vechicle.

Rating breakdown (out of 5):
4 people out of 5 found this review helpful. Did you?
Show full review
See all 8 consumer reviews

News
7 Things We Want to See in an Electric Hummer

All model years for the Hummer H2 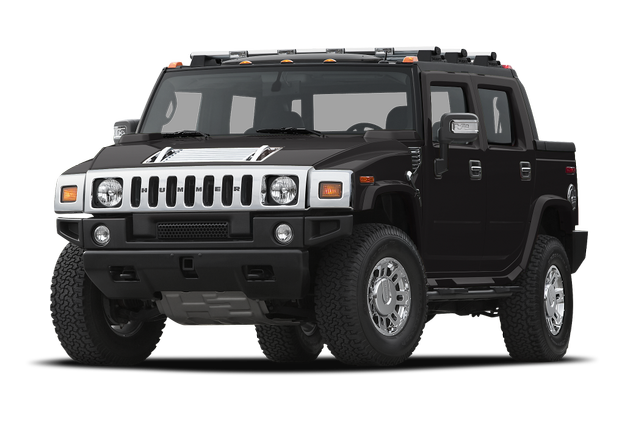 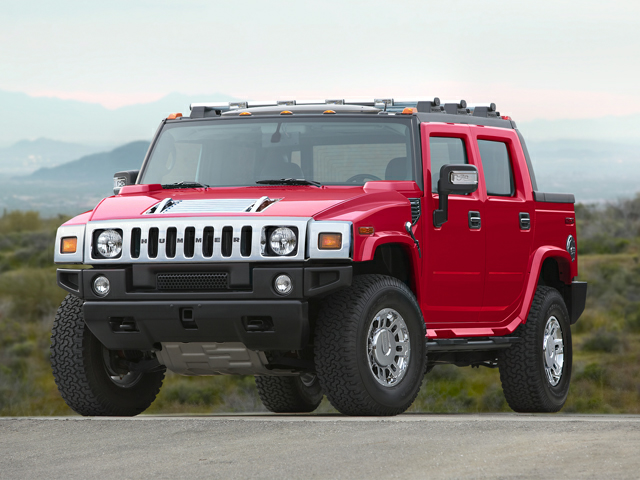 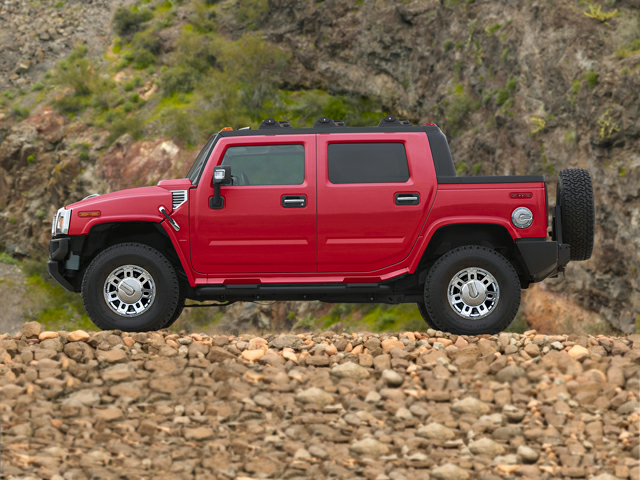 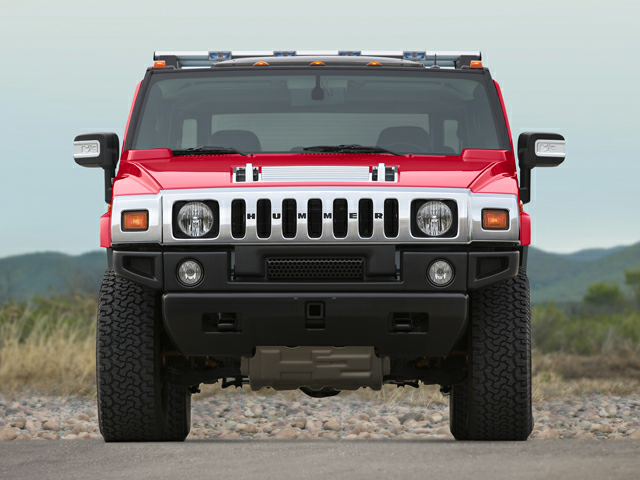 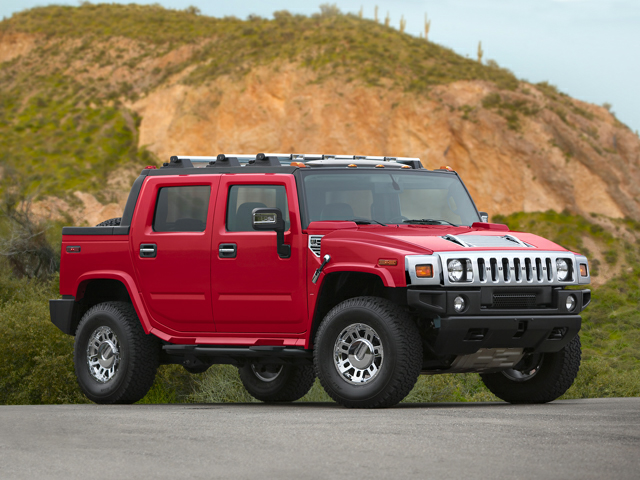 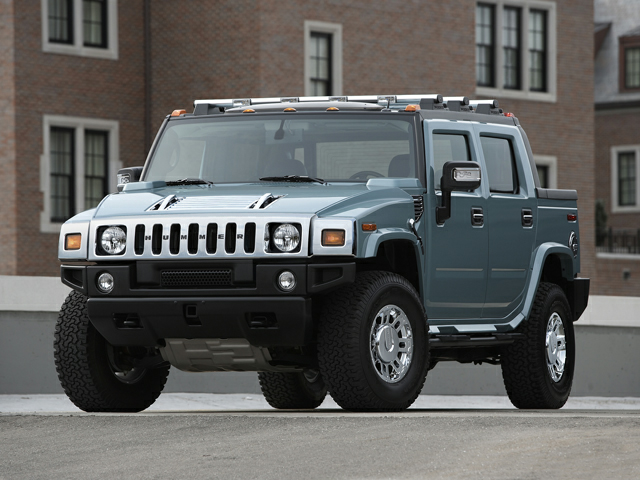 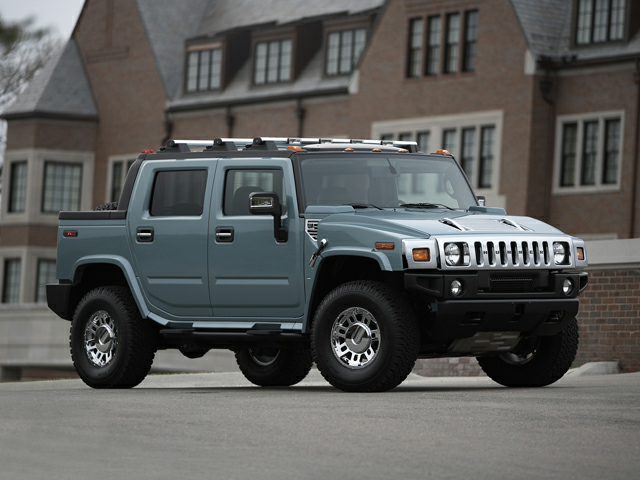 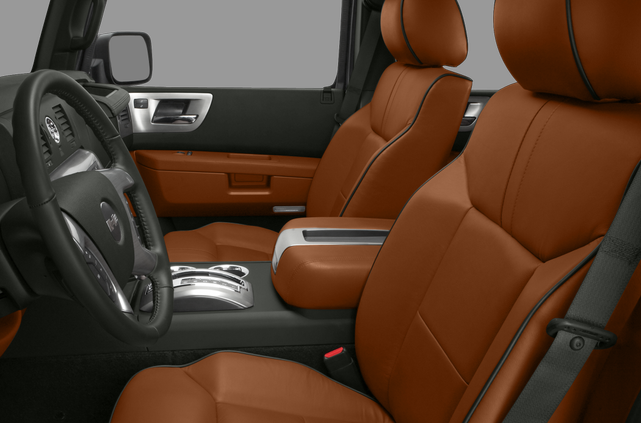 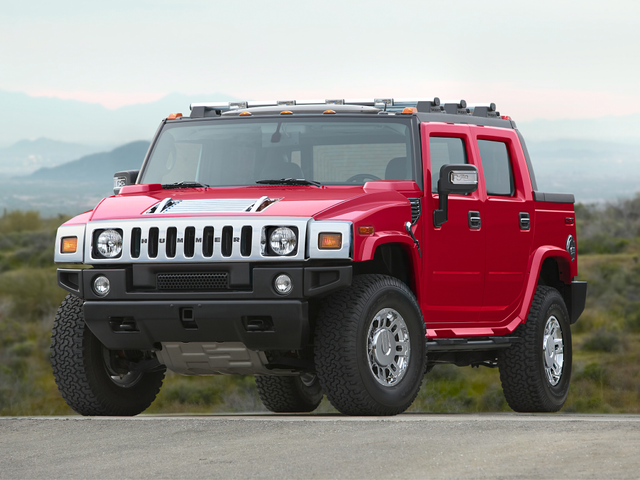 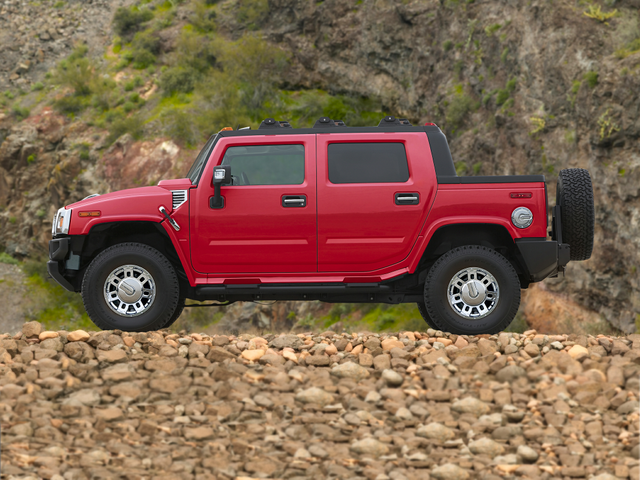 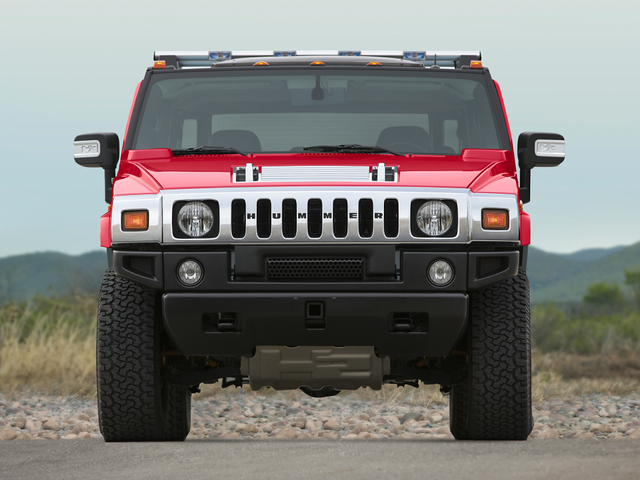 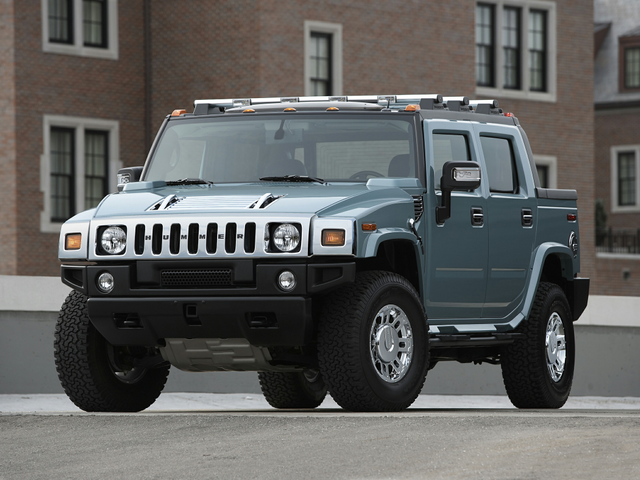 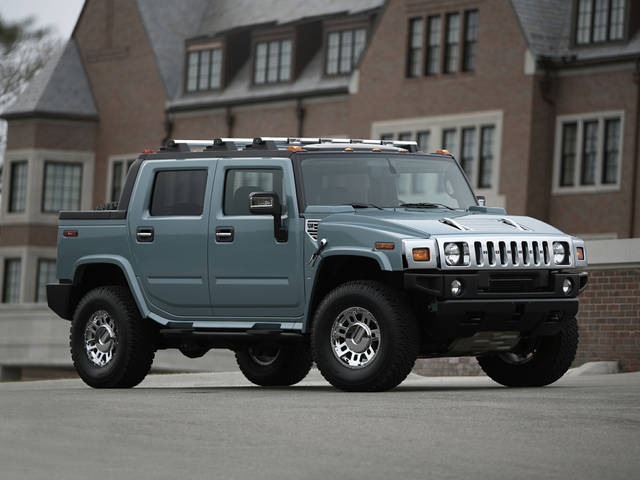