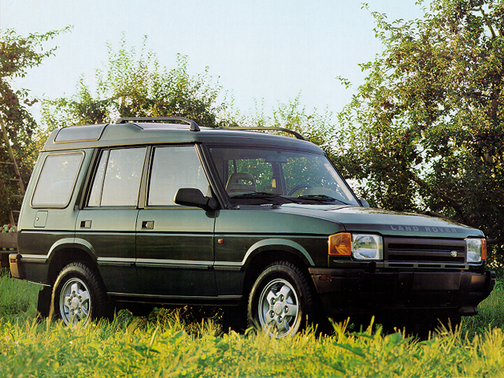 Our 1995 Land Rover Discovery trim comparison will help you decide.

Must be, because the last time we test drove a Land Rover, the folks at the British sport-utility vehicle maker said there would be a dramatic climatic change down there the next time they let us set foot-or any other part of the anatomy-in one of their vehicles. The last vehicle tested was the Land Rover Defender, best described as a bed of nails on four wheels. You’ve heard of lean, mean, fighting machines? Defender was a rude, crude motorized dude lacking in such essentials as technological innovation.

The change of heart from Land Rover was prompted by the fact that the Discovery is one of the vehicles up for consideration in the North American Truck of the Year competition, the second annual judging held by a group of the nation’s automotive journalists to pick the best without regard to how many pages of advertising the bestowed drops on the bestowee.

In other words, it’s a pencil press instead of a buff book type of contest.

That’s pretty good company for Discovery to be seen in, especially considering chances are likely more Blazers or Explorers will fall off the delivery truck than Discoverys will make it on the truck. Ford expects to sell about 425,000 Explorers, Chevy about 300,000 Blazers and Land Rover about 10,000 Discoverys. Pocket change.

Discovery can rub bumpers with the big boys because unlike its cheaper ($27,900) cousin, Defender, the $29,000 Discovery comes with dual air bags, anti-lock brakes, side-impact door beams and full-time four-wheel-drive as standard. Even some of the big boys don’t offer as much (driver’s only air bag in Blazer).

You might be tempted to say Discovery is cute. That would be a slight exaggeration because the styling is a tad outdated. Pebbles and Bam Bam probably cruised Bedrock in an early Discovery.

The vehicle stands tall (the better for down-the-road visibility), but it stands so tall (77.4 inches) it borders on passing for a double-decker bus. Boxy and tall-two design techniques made passe by aerodynamics.

Discovery also rests high off the ground so you can better enjoy off-roading. There’s8 to 12 inches of clearance, depending on whether you mark pavement to axle shaft or to differential. Big boulders or deep streams, therefore, are no obstacle to this machine.

As we’ve noted when testing four-wheelers, most owners don’t spend $30,000 to bulldoze their way through gravel pits or coal mines, but if ever you wanted to accelerate depreciation of your investment in one afternoon, Discovery is at your disposal.

Land Rover folks even say that a dent or ding or two is a mark of distinction among Land Rover owners. They mus t mean on the aluminum body panels and not the owner’s craniums, don’t you think?

Discovery is built for rugged play as evidenced by the fact the body can tilt up to 42 degrees and maintain its composure, according to Land Rover. Look at 42 degrees on a compass and you’ll appreciate Discovery’s bravado. Of course, picture yourself riding up a hill or across a ditch while teetering at a 42-degree angle, with 4,400 pounds underfoot, and you’ll wish Discovery came with one of those paper bags you find slipped in the seat backs on airplanes.

Other than the feeling of being a bit top heavy in the two-story Discovery (the short 100-inch wheelbase no doubt contributes), the ride and handling were pleasant. Coil springs (U.S. rival Explorer offers only leaf springs) and 16-inch all-season tires helped, as did the well-cushioned but equally supportive leather bucket seats.

Discovery was as comfortable as Defender was unpleasant.

There’s also a raft o goodies on board Discovery, such as the pair of optional facing side jump seats mounted in the very back for a pair of rugrats to fidget on while you’re climbing a mountain or cruising the expressway.

Kudos to Land Rover for making it easy for kids to enter the back end and pile onto those seats. An optional hydraulic step pulls out and down from the undercarriage to provide a quick boost into the rear cargo/passenger area. A large grab handle in the side wall assists the step. Neat feature.

Other items worth noting are dual power moonroofs to serve front and rear occupants and easy-to-use push-button key fob to lock/unlock the doors, dual cupholders front and rear, map holders built into the roof above driver/passenger, headlamp washers and stowage holders in the doors and center armrest.

So now we’ve had the opportunity to drive Discovery and mark the tally sheet in the North American Truck of the Year competition.

The winner is announced in January, and we’ll pass along our choice and our reasons before then, along with our choice in the North American Car of the Year competition. The winners also will be announced. The Mercedes-Benz C-Class sedan (220/280) won the maiden contest for 1994.

was frist time buyer. it was ten years old. i love it . drive and handels nice. like back seats have for grand kids thy love it.

All model years for the Land Rover Discovery 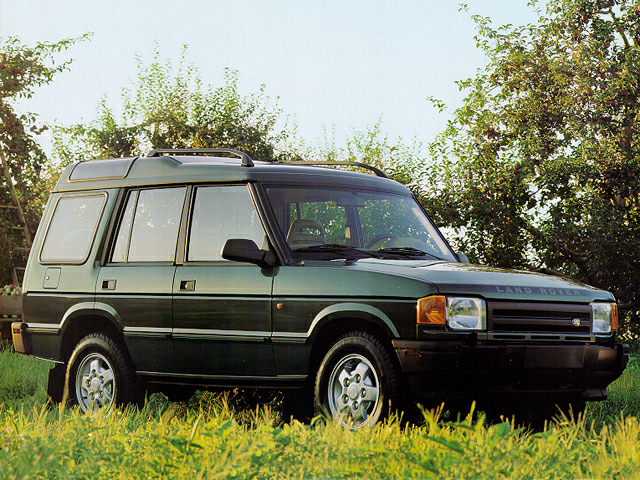