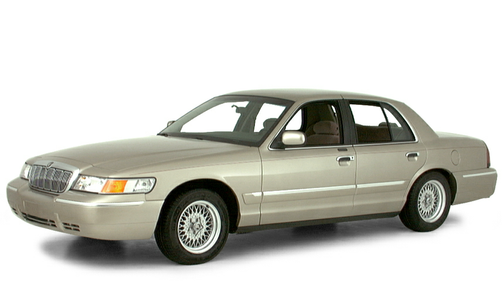 Our 2000 Mercury Grand Marquis trim comparison will help you decide.

You won’t find many Mercury Grand Marquises in the parking lot at your local high school or college–except in the teachers’ section.

This isn’t a vehicle for the young or young at heart as much as it is for those who start conversations with, “When I was a kid . . . “

Grand Marquis is for those who reach a stage, as well as an age, in their lives when neither styling nor fuel economy nor zero-to-60-m.p.h. times head the list of wants.

Rather, the Grand Marquis buyer wants size–and equates–every pound wrapped around him or her as a way to ward off injury in a collision.

Size and weight, we’ve long been told, also mean the ability to tow a trailer or pull a boat, though we honestly can’t recall the last time we saw a Grand Marquis or cousin Ford Crown Victoria with a hitch in use.

Grand Marquis also boasts two other features that the mature buyer demands: rear-wheel-drive and a V-8 engine, because those were the features of choice when they started to drive and they served them well.

It appears rear-wheel-drive is going to become more prevalent as automakers caught up in the front-wheel-drive revolution of the early ’80s return to RWD in more than a sampling of models.

The merits of FWD versus RWD have been debated for years.

Fact of the matter is that there basically was only one reason automakers switched to FWD, and that’s because the federal government said automakers had to build more fuel-efficient vehicles.

The quickest way to do that was to downsize cars to make them smaller and lighter. But to downsize and shed pounds on the outside without robbing too much room from the inside–because the government ordered that cars, not people, get small–carmakers decided to abandon RWD and its space robbing drive-train hump running stem to stern down the middle of the floor.

If you haven’t noticed, many of those downsized smaller cars are getting larger again with increased wheelbases, lengths and widths. After 20 years operating under the belief that the only way to conserve mileage is to lop off pounds and inches, the automakers’ engineering teams have come up with ways to regain size without adding pounds by using lighter materials and developing engines that provide more power without burning more fuel.

But we di gress.

Grand Marquis is big without being unruly. The suspension, with gas-pressurized nitrogen shocks, is tuned for cushioned ride over blemishes in the road. But there is a trade-off. You will experience lean in corners and turns, which we found though the test car came with a handling package at $535 that included rear air suspension, rear stabilizer bar, aluminum wheels and dual exhausts.

The Grand Marquis also comes with Precision Trac, which means the rear suspension has been designed to limit side sway in crosswinds or hard cornering to eliminate complaints that the vehicle tends to float.

We didn’t experience crosswinds or hard cornering in our test but did note that cornering at low speeds resulted in body lean, a trait difficult to avoid in a full-size family sedan not designed to act like a performance machine.

Traction control, along with anti-lock brakes, is the great equalizer when it comes to the choice of FWD or RWD.

While some look upon RWD as evil, millions of motorists who learned to drive in RWD cars have survived long enough to celebrate the coming of a millennium. Of course, nearly all of those survivors have tales about slipping and sliding in the RWD vehicles in the Snow Belt, but they have survived nonetheless.

But add traction control to prevent wheel lockup and skidding, along with the ability of ABS to control braking on slick surfaces and the problems with RWD seem to disappear.

But, again, we digress.

The Grand Marquis LS we tested had Ford’s 4.6-liter, 215-horsepower V-8 with 4-speed automatic. The 4.6 usually develops 200 h.p., but when you add the optional handling package with dual exhausts, you gain 15 h.p.

The 4.6 has ample power to get off the line, into the passing lane and down the merger ramp. Only drawback is that this is a full-size four-door sedan that weighs more than a midsize Ford Taurus and as such, the fuel economy rating is nothing sensational–18 m.p.g. city/25 m.p.g. highway.

Wait, you say, 18/25 isn’t bad for a full-size sedan that will hold a cabin full of adults and their golf clubs.

But based on the speed with which the fuel gauge measured the contents of the 19-gallon tank moving from “F” to “E,” we’d be hard pressed to accept the government’s rating. If you want decent mileage in a full-size Grand Marquis, cruise the interstate.

But, as we said, fuel economy isn’t a primary concern of the mature motorist who equates size with safety.

But the mature motorist might gripe about his or her ability to pull quickly into any parking-lot stall in a not-too-petite Grand Marquis. Next time you visit a parking lot, note how many Grand Marquises rest evenly between the lines with front and rear wheels pointed straight.

Our test car added ultimate and handling packages plus leather seats at $735 and a six-disc trunk-mounted CD changer at $350.

New features for 2000 include an emergency trunk release to keep kids from being trapped inside and a Belt Minder system that sounds chimes every few seconds until you buckle your belts. Though it can be irritating, Belt Minder prepares motorists for s o-called smart air bags, whose deployment and speed are dictated by sensors telling the system whether you are belted or not. The system is offered in the 2000 Ford Taurus and Mercury Sable.

December 21, 2019
By Tender from Dallas texas
Used to own this car

This was a great car to test drive.. I appreciate the time and effort for trying to put me in a more modern up to date car..

Most spacious car I’ve every owned very reliable very dependable. Such a smooth and comfortable ride I love the power of the V8 is serious.

One of the most reliable vehicles I’ve owned

Rating breakdown (out of 5):
5 people out of 5 found this review helpful. Did you?
Show full review
See all 24 consumer reviews

All model years for the Mercury Grand Marquis 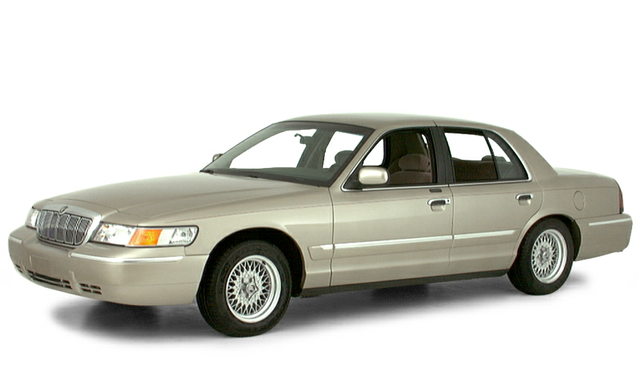 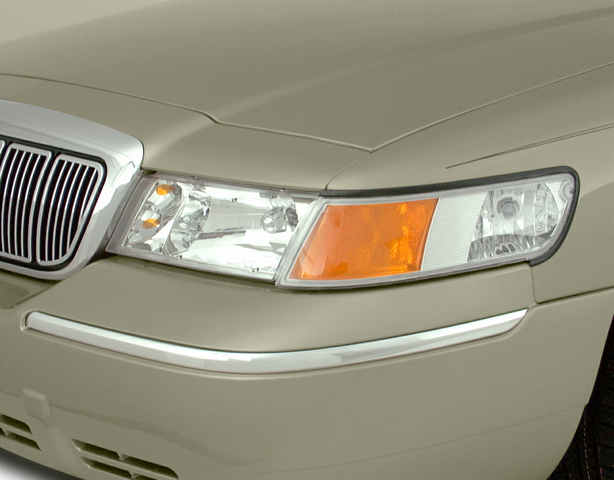 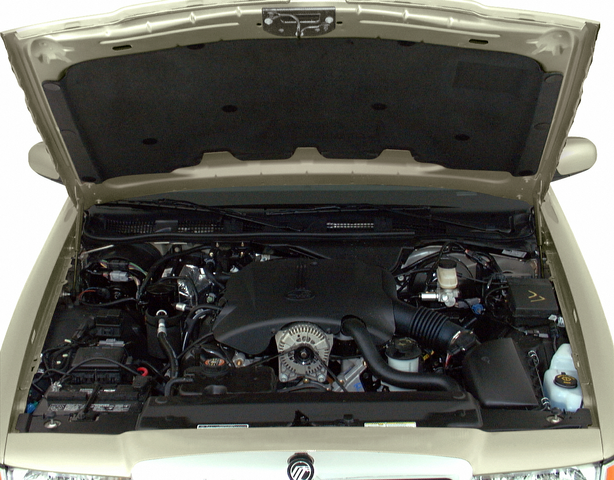 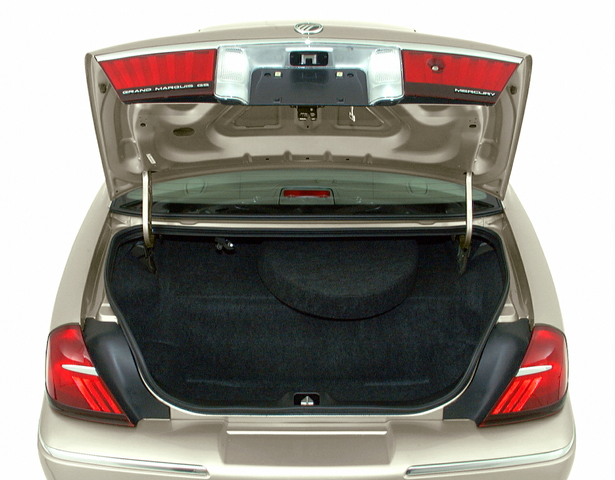 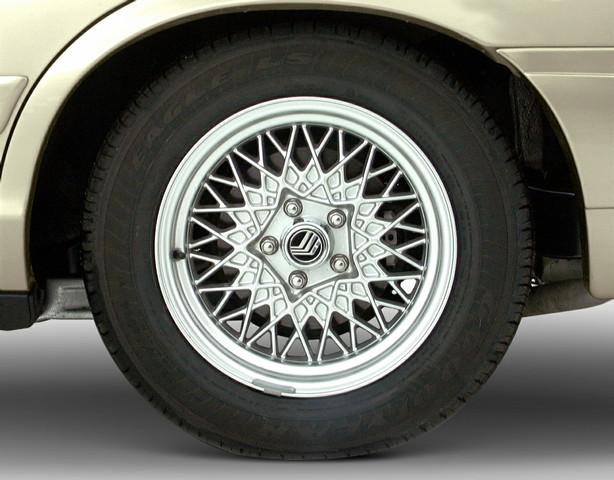 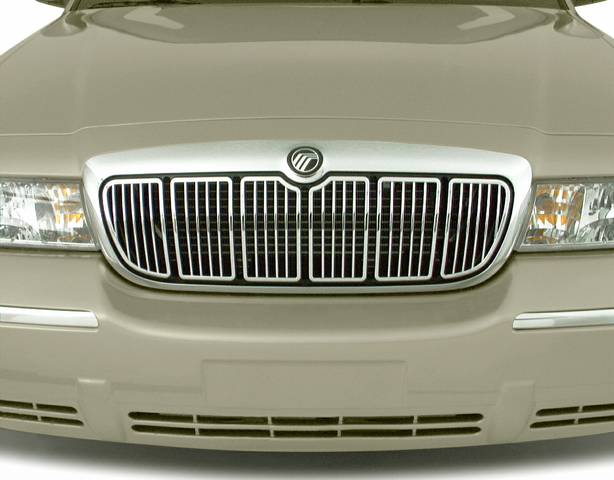 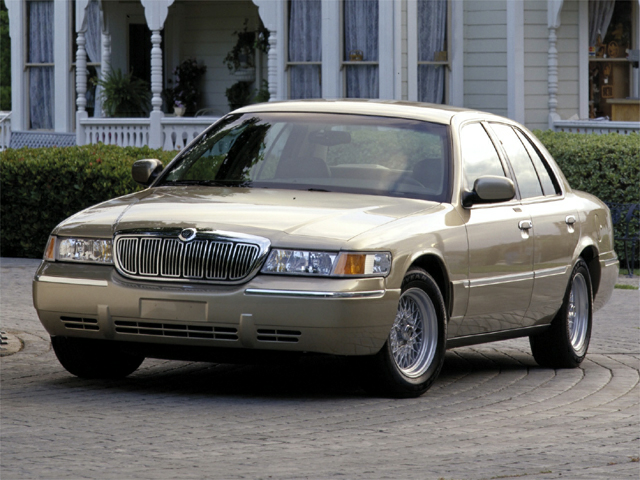 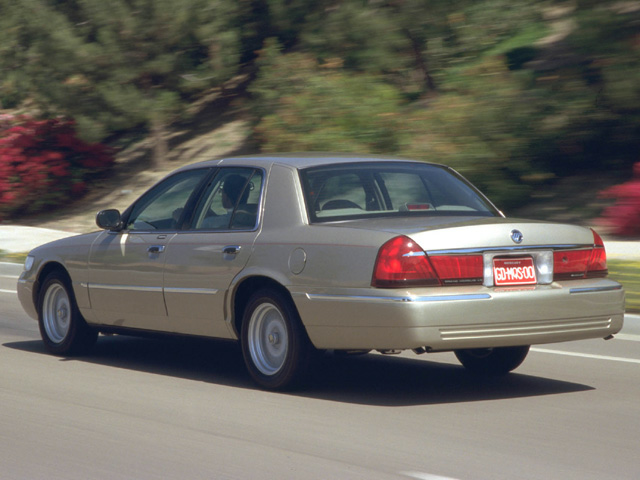 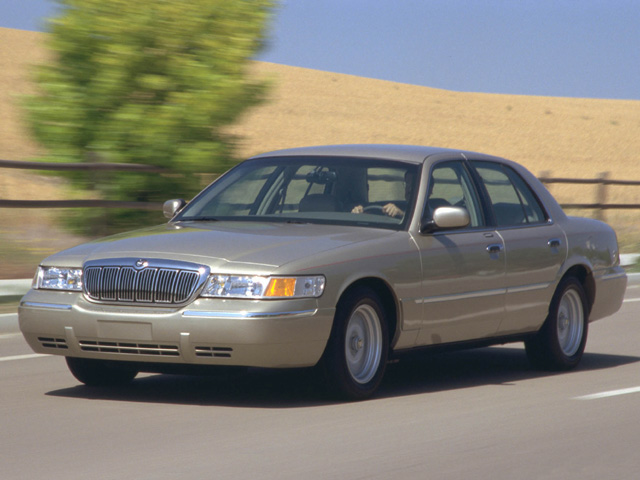 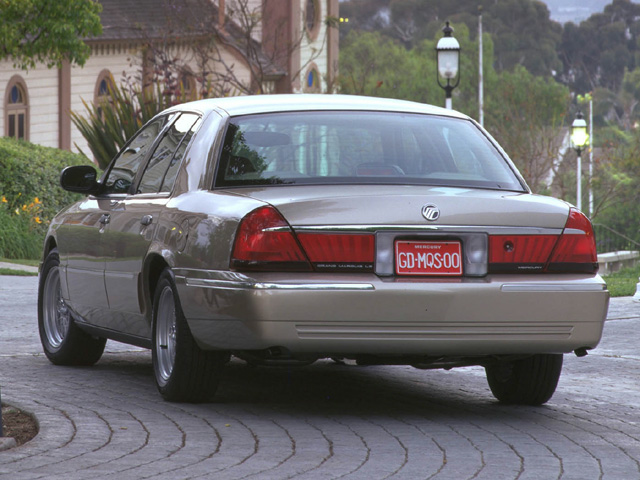 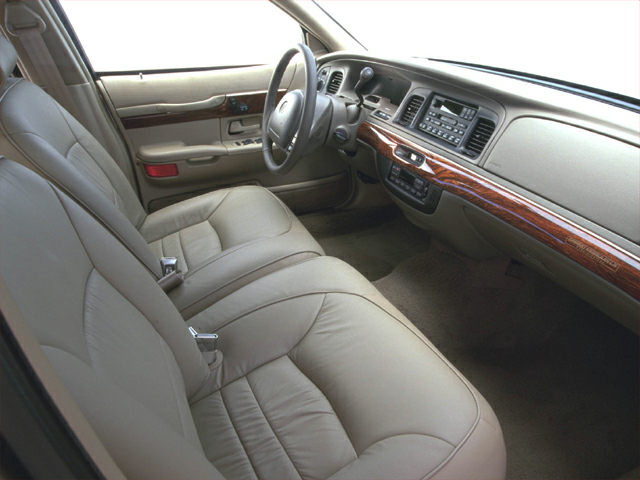 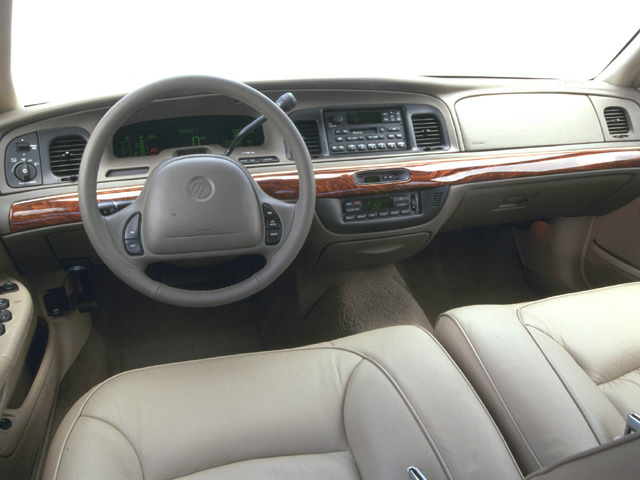 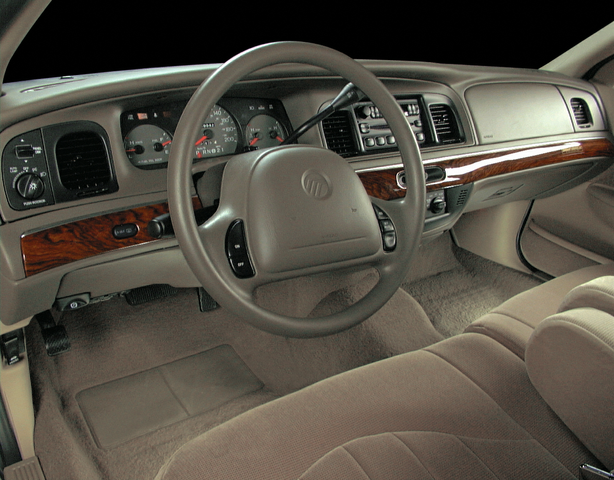 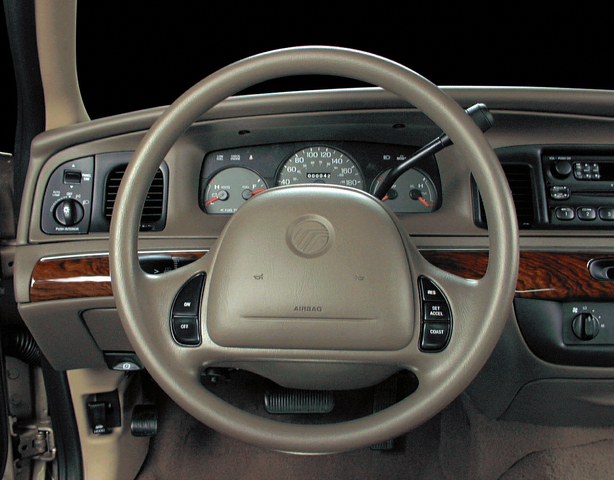 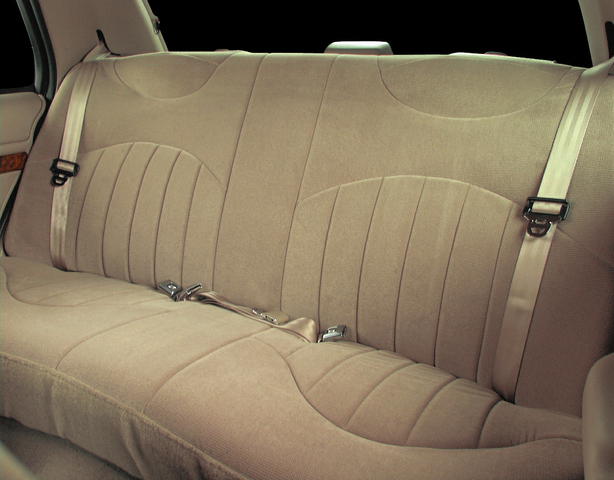 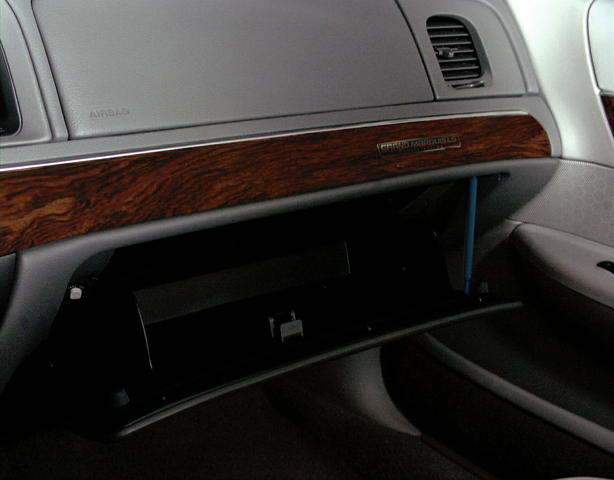