Our 1998 Mitsubishi Galant trim comparison will help you decide.

Maybe Mitsubishi needs to remind people it has a mid-size family car.

Wracking your brain to remember what it is? Judging by the sales numbers, you’re not alone. A lot of people are overlooking the Mitsubishi Galant.

True, the Galant, which was last redesigned in 1994, is in its final model year before another redesign comes in the next model year.

It’s also true that more and more family car buyers are turning to sport-utility vehicles instead.

Still, several of the Galant’s competitors &#151; like the Honda Accord and Civic sedans and the Toyota Camry &#151; posted sales gains last year while the Galant suffered a steep, 35 percent drop. The Camry even became America’s best-selling car.

I tested an ES, a midlevel version of Galant, and found it to be a competent family hauler.

There’s decent room for four inside, with an especially good amount of front legroom. The Galant can carry five, but three adults fit snugly in the back; two back there is best.

All seats are supportive in the Galant, and gauges are well-arranged. I liked and regularly used the convenient driver side foot rest.

I had a five-speed manual in the car, and it was easy to get the most out of the 2.4-liter, four-cylinder. The Galant eagerly got up to highway speeds, with some buzzy sounds, typical of four bangers, emanating from the hood. The car just as easily and comfortably settled into slower, city traffic.

The Galant’s steering is a bit looser than I’d like, and the body isn’t quite as stiff for those tight corners as in some other autos.

But overall, the Galant is capable in the day-to-day chores a family vehicle faces. And its styling is mainstream and attractive.

Perhaps part of the problem is that the Galant is competing with recently restyled competitors who are grabbing the spotlight. The Accord is new for the 1998 model year and so is the Nissan Altima. The Camry was redesigned a year earlier.

And perhaps part of the problem is that the Galant is too much like its competition in size and attributes and yet ranks below its Honda and Toyota competitors in widely publicized reports from Consumer Reports and J.D. Power and Associates.

The Galant gets about the same fuel economy as the Accord and Nissan Altima. And the Galant’s 12.5-cubic-foot trunk is within 1.3 cubic feet of that in the Altima.

Both the Accord and Galant ride on standard 14-inch tires. And both have similar headroom in the front and back seats.

And in both its 1996 and 1997 New Car Buying Guides, Consumer Reports said the Galant was “a notch below” its Honda and Toyota competitors.

Ouch. That can hurt.

But also be aware that Mitsubishi’s ranking last year in the Power IQS is an improvement from its 1996 showing, and the company is striving for further improvement.

In fact, in the detail of the Power study, there were dozens of cars that fared worse than the Galant.

Very reliable car for the price

This is a good car. Very reliable. The design is about average but the gas mileage and the reliability make up for it. Good starter car for a teen or a computer car for a college student.

maintenance is so bad. Room light, cigar charger and audio don't working. But employee didn't tell me about it.

This car does most things you would want it to do adequately well, but has no exceptional qualities to recommend it nor any exceptional defects to condemn it. Best points: - Brisk acceleration despite the somewhat unpredictable timing of the automatic gearchange (worst when cold) - Good braking performance - Reliable, except for (in my case) a transmission rebuild at only 63,000 miles - Little rolling round bends - Comfortable for short to medium-length drives; suspension absorbs well all but the largest bumps in the road - Good sound from factory stereo/cassette - Reasonably quiet; at highway speeds, loudest sound is from tire roar - Roomy interior for up to 4 people; 5 is a squeeze - Large trunk, although intrusive hinges can crush tall objects - Efficient heating and cooling, with separate hot and cold air vents to the face Worst points: - Indifferent but predictable handling, with front wheels soon scrubbing when pushed hard round corners - Vague road feel - Poor mpg for size of car (23 town, 27 hwy), with range of just over 300 miles max. - Awkward cupholder placement in front of radio - Rather small glovebox - Large gap between sun visors (although they can swivel to the side when required) Overall, you could do a lot worse than buy this model, but you could also do quite a bit better; its blandness gives it many competitors among similar models. 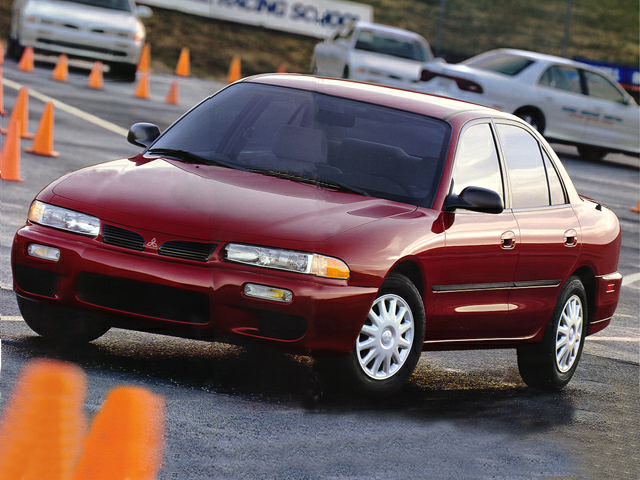 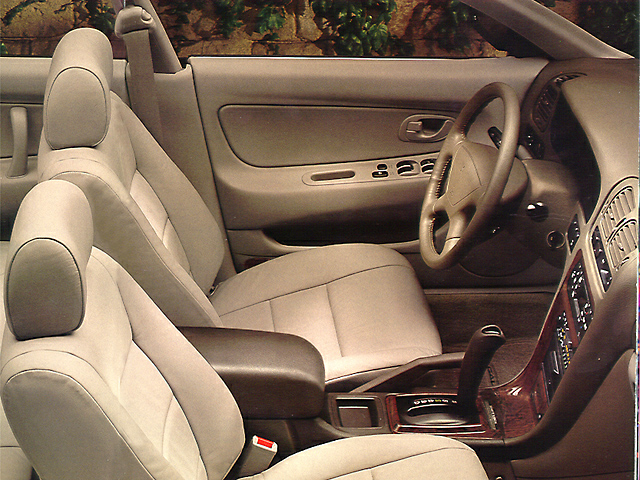