Our 2001 Mitsubishi Galant trim comparison will help you decide.

One almost feels sorry for the Mitsubishi Galant, or any car that is sent forth to go mano a mano with the likes of the Honda Accord or Toyota Camry.

It didn’t take the Supreme Court to make the call on this one: when the votes were tallied for the last model year, the Accord handily won the title of best-selling car in the U.S., though Toyota made a good race of it. And this is people voting with their pocketbooks for what often is a more expensive machine than many comparably-equipped rivals. Why? Reliability is the word I hear most often.

Both the Accord and Camry have earned icon status for dependability. The Galant has not. Consumer Reports rates it worse than average for both depreciation and cost of upkeep. Both Accord and Camry are rated above the norm in these categories.

But, if you mean to keep your car forever and don’t fret about the occasional trip to the dealer’s service area – or want to stand apart from the herd – the Galant would not be a bad choice.

I found it quite pleasant to drive, unlike its more pretentious stablemate, the quirky Diamante, discussed here last week. And unlike the Diamante, the Galant is more sophisticated than the last one I can recall driving, with a more solid, well-integrated feel.

The Galant is made in Normal, Ill., at the plant Chrysler and Mitsubishi jointly created some years back. (DaimlerChrysler recently bought a 34 percent equity stake in Mitsubishi. The two companies have been hemorrhaging money in the billions, and are on a course to jointly develop a new round of small and midsize cars.)

The Accord and Camry are sometimes described as bland looking. That charge will never be laid to the Galant, which might seem a bit overdone to any but fans of Pontiac’s excesses. Lower bodyside bulges, a chromed grille, and in some cases, a prominent rear wing and other “aero” effects make it look like a schoolboy’s conception of what a four-door sedan ought to be.

The interior is less of a hodgepodge, to the extent that the door panels seem to have bypassed the stylists entirely, although the leather trim was delicious. I had plenty of headroom and legroom behind the wheel and felt constricted, as in any midsize, back in tourist class. The trunk, at 14.6 cubic feet, was reasonably accommodating and of useful, usable proportions.

The Galant is furnished in five series, ranging from the fleet-buyer’s delight, the DE, on up to the most sporty formulation, the one furnished for my appreciation, the GTZ. The DE and ES are powered by a 2.4-liter 4-cylinder engine. With 140 hp (@5,500 rpm) and 155 foot-pounds of torque (@4,000), this hard-working little burner can only aspire to adequate performance, given the car’s 3,000-pounds-plus mass and the mandatory four-speed automatic transmission, common to all series. The ES series can be fitted with either a 4-holer or a 6-holer, and the LS and GTZ levels come with the 6.

The 6 displaces 3 liters, arrayed in a V, with a single overhead camshaft and 4 valves per cylinder. It produces 195 hp (@5,500 rpm) and 205 foot-pounds of torque (@4,000), a 39 percent jump in power and a 32 percent augmentation of low-end grunt. Unfortunately, despite a modest 9:1 compression ratio, this engine expects to be fed 91-octane swill, a fact not likely to be appreciated by the bargain-hunters who might be drawn to the Galant.

At least EPA estimates are quite respectable for the weight class, 20 mpg city and 27 highway. I measured 23.7 in a mix of country cruising and freeway flying.

The GTZ tested is the sportiest rendition, with slightly more robust shocks and springs and a different treatment of front and rear anti-roll bars, though sharing a powertrain with the more sedate members of the family. The GTZ seemed by no means race-ready. The ride was quite agreeable, even over dippy roads and broken pavement. It maintained its poise excluded most of the road problems the suspension had to deal with. At elevated velocities it was relatively quiet, with the rush of air the main noise component.

The lesser models must be cushy.

The GTZ, like other Galants I’ve tried, is a runner, feeling as if it’s coming into its own when it approaches the national speed limit. The top gear on the four-speed automatic transmission is a fairly steep overdrive, so the engine burbles along contentedly at highway speeds.

The transmission shifted quickly and smoothly most of the time, although it could get confused by rapid-fire throttle changes, and second and first were far enough apart that forced downshifts were usually a bit awkward.

The Galant showed none of the vexatious handling peculiarities that plagued the Diamante. Despite driving the front wheels with a generous amount of power, it torque-steered only a little, and that in extreme circumstances. It had a decent amount of self-centering steering tendency, not the willful self-absorption of the Diamante.

Braking was very good. The upper classes have ventilated discs in front and solid discs at the rear, while the lower orders get drums aft. Antilock is standard on all but the entry-level car. I tried a succession of panic stops from 65, and the Galant maintained its heading even in slalom exercises without undue drama and in agreeably short distances.

The National Highway Traffic Safety Administration has crash-tested the 2001 Galant. The car garnered 4-star ratings (on a scale that runs to 5 stars) for protection of driver and front and rear passengers in a 35-mph barrier impact. In side impacts, the car afforded 3-star protection to driver and co-pilot and merited 4 stars for rear passenger safety. With the available side air bags for the first cabin, the rating leaped to 5 stars. They are included on LS and GTZ series cars and available only as part of a $2,400 package on the ES. Shame on Mitsubishi for making an important safety adjunct a profit center. The Insurance Institute for Highway Safety has not yet subjected a 2001 Galant to its more stringent 40-mph offset barrier crash.

The standard stereo on all but the LS and GTZ machines is a 100-watt, 4-speaker AM-FM-CD rig. The top series have a 210-watt Infinity setup, again AM-FM-CD, with 7 speakers. Overall sound quality was very good, and tuner sensitivity was well above the norm.

The instruments are black-on-white with orange needles, four in number, and ovoid. They were properly positioned and easy to read even in bright sunlight.

A conspicuous omission was a gear-selection readout within the driver’s line of sight.

The GTZ I tested had, as is typical of that series, no options, but a ton of goodies, including such frills as a power moonroof, leather trim, adjustable lumbar support and an engine immobilizer anti-theft system.

Build quality was quite good, and the silvery paint on the tester was striking. Base price was $24,007, which swelled to $24,527 when freight was added in, a very appealing number for such a well-laden machine. While shopping, you might also check the Mazda 626 and the Volkswagen New Passat, for different style and feel.

Still Drives, nearly 22 years after it was buit.

It is March 20, 2022. I purchased my 2001 Galant in August 2004. This car still goes. Check engine light has been on for an exhaust issue for at least 7 years. Window motors work, transmission works, engine works. The A/c is sketch, but I think that it is fixable. The car keeps going. I think it will rust apart before the engine and tranny quit. I promised myself I would not purchase a new car until this one dies, or until my brother was ready to buy it. Unfortunately, my brother passed away last month-- now a definitely cannot let this car go!

You get what you pay for, not always a bad thing

March 4, 2020
By TestDriven from Fargo ND
Owns this car

This car can be bought for cheap and, if taken care of properly, can last you a long time. It is a bare bones car and there aren’t too many luxuries that come with it. 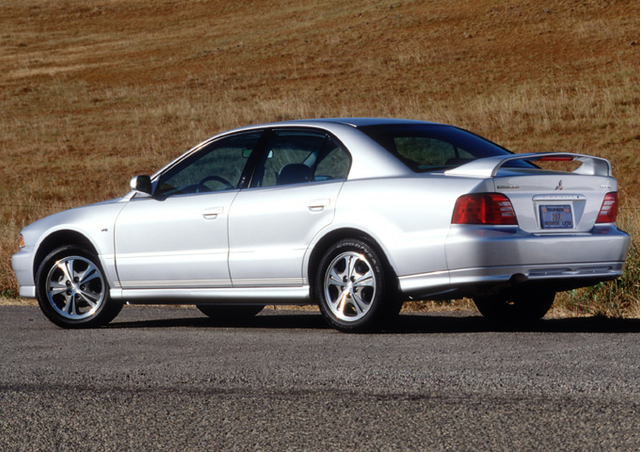 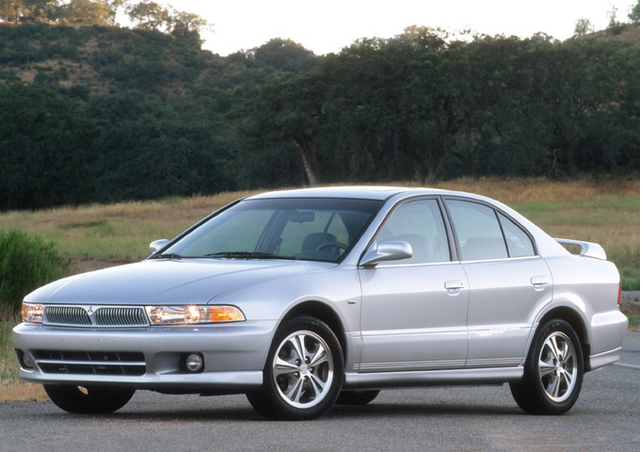 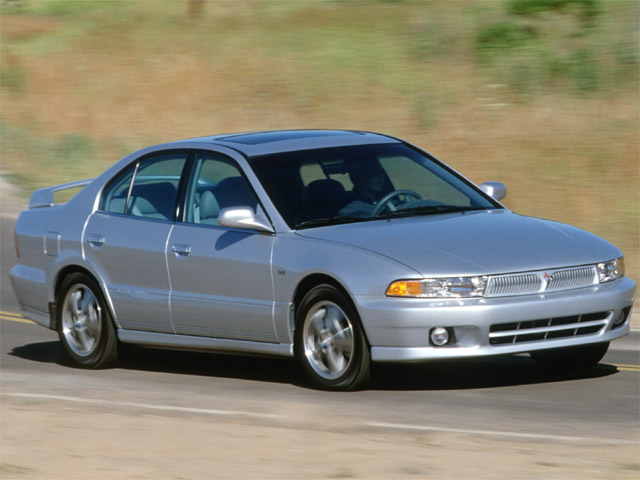 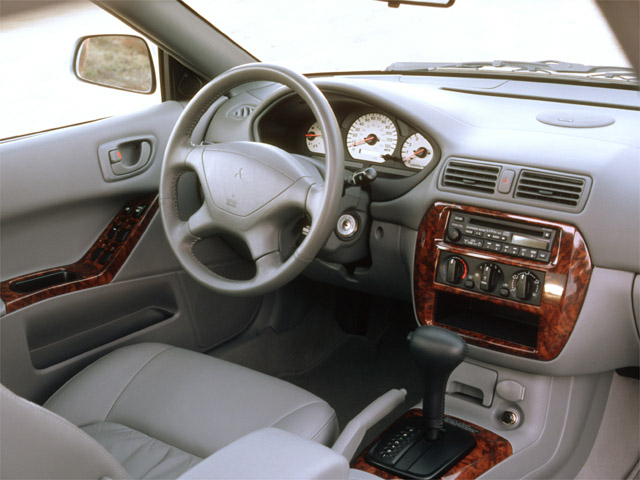