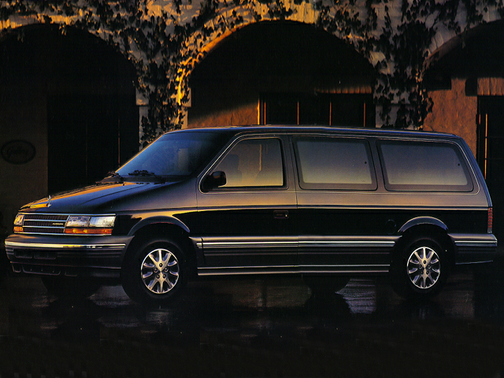 Our 1994 Plymouth Grand Voyager trim comparison will help you decide.

(Transportation/Aug. 22), it was on the streets and hills of San Francisco, where we tested a ’94 Dodge Grand Caravan LE with all-wheel drive.

Back in Chicagoland, the test vehicle was a ’94 Plymouth Grand Voyager LE with all-wheel drive. Regardless of the name, Chrysler pulled out all the stops for the new model year to try to keep its title as market champ in the mini-van segment.

The ’94s have standard driver- and passenger-side air bags; optional anti-lock brakes; optional child-safety seats with a rear tilt feature to keepthe child comfortable when he or she dozes off; a standard movable front passenger seat for forward or backward play to adjust the legroom (the seat had been stationary for years); and a standard smoother, quieter four-speed automatic transmission.

Also, the 3.8-liter V-6 engine that’s optional in the Grand Caravan and Grand Voyager gets a 12-horsepower boost, to 162, while protective beams have been added to both front doors and the side sliding door.

The interior was redesigned to be more user-friendly. A trio of air ducts in the center of the instrument panel provides improved cooling and heating; the radio is higher in the dash, for easier use; the power windows have paddlelike controls that you can use without taking your eyes off the road; and a small tray has been placed in the center dash top to hold items such as keys or change.

The power door locks can be programmed to lock once you’ve reached 8 m.p.h.and unlock when you brake and put the gearshift in “park”; or to lock after reaching 8 m.p.h. and stay locked even after parking, until you press the release button.

There’s also keyless entry, so you need only press a symbol on the key fob to lock or unlock the doors. A 1-inch-longer left-side windshield wiper keeps the driver’s side of the window clearer, and there are enlarged cupholders to hold wider-bottom containers. And rear-seat cupholders feature side cutouts tohold coffee-cup handles as well as pop cans.

Our test vehicle here and in San Francisco came with the 3.8-liter V-6, a quiet yet sufficiently powerful engine, teamed with a four-speed automatic transmission. The 15 m.p.g. city/20 highway rating is at least 3 m.p.g. lower than we’d like.

Whether in San Francisco or Chicagoland, we’d like some changes made in thevan. For starters, the rearmost seat in the Grand Voyager moves only slightly.In the Mercury Villager and Nissan Quest, the seat rests on a track so that you can shove it far forward to make room for packages in back.

We’ve had the opportunity to drive the ’94 Chevrolet Lumina van (Cartalk/Oct. 24) with its optional power sliding side door, and we hope Chrysler adds the feature in its vans. The $295 option in the Lumina is worth the price because of the ease of entry and exit created by pushing the power button. Chrysler has developed a similar door, but it held off on making it available. Perhaps for the 1996 model year, when the Chrysler mini-vans will be restyled, the feature will be added.

The Lumina, along with the Pontiac Trans Sport and Oldsmobile Silhouette, which also offer the power sliding side door, will add traction control at midyear, another feature Chrysler should consider for its non-all-wheel-drive vans.

Well after our trek to California, Chrysler finally priced its 1994 vans. The wealth of new or improved equipment resulted in a stiff average price increase of $1,200 across the mini-van line.

Hasnt let me down yet...

January 12, 2011
By suey from Connecticut
Owns this car

I purchased this van in September after my husbands truck blew a motor and we needed something cheap for him to get back and forth to work. It is loaded with features and has been very reliable so far. We have only had to replace the brakes. It has a nice ride and is comfortable and roomy. I would recommend it to anyone! It has 186,000 miles on it and shows no sign of slowing down.

December 29, 2010
By Chrysler Charlie from Georgetown, TX
Owns this car

I bought my 1994 Plymouth Grand Voyager new in January 1994, and am still driving it daily. The original engine is still going strong, does not use oil, easily passes annual emission checks, and has plenty of power. The exterior paint has shown some deterioration, but a $35 can of auto paint and a little prep work took care of that easily. The weakest part of the vehicle has been the transmission, which I have had to have rebuilt once and replaced twice in the 284,000 miles. That's about 95,000 miles per transmission, and the third one was just put in, so the average will go up as I add more miles driven. This '94 Plymouth Grand Voyager has been the most reliable vehicle I have owned in 52 years as a car owner.

All model years for the Plymouth Grand Voyager 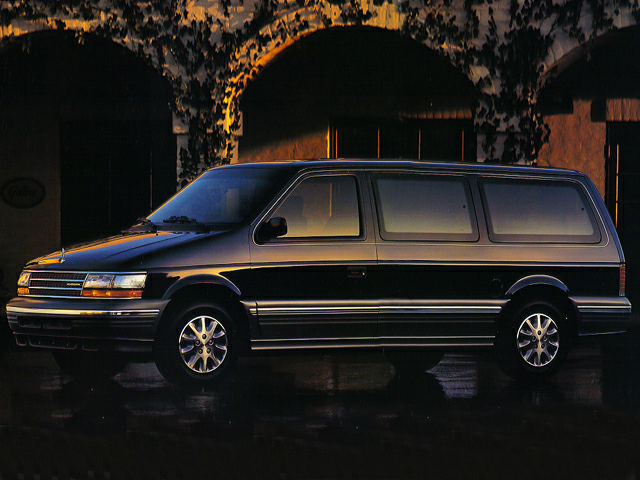