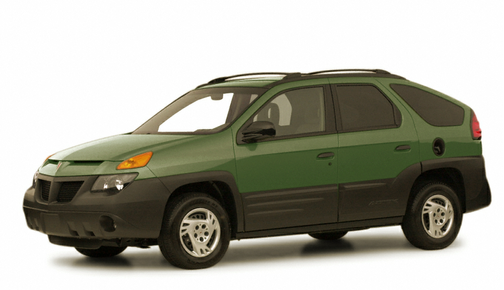 Our 2001 Pontiac Aztek trim comparison will help you decide.

This “ugly” thing has taken on a life of its own.

The new-for-2001 Pontiac Aztek has been labeled “ugly” by any number of auto reviewers, and now that label is stuck on the crossover vehicle like a Super Glue-soaked pigeon.

Funny how these things happen. A lot of the reviewers jumping on the “ugly” bandwagon are the same ones who toasted Pontiac for introducing such a daring, clever concept vehicle at the 2000 North American International Auto Show in Detroit.

But if you say something enough times … well, you know the drill.

Keep saying Elvis is alive, and next thing you know, 8,000 people are lined up at Caesar’s Palace in Vegas waiting for his comeback show. I’m absolutely convinced that in a word-association drill, most Americans would respond to “Aztek” with the word, “ugly.”

Keeping in mind that beauty is in the eye of beholder, I don’t think the Aztek is ugly at all. Pontiac’s “sport-recreation” vehicle is what I would call functional. You can stretch a purpose-built weatherproof tent over the back half of the vehicle, for crying out loud. Try doing that with your Corvette.

And the front end of the Aztek GT I tested looked positively stylish to me, although the bright-yellow paint job was a little over the top. Beyond that, there was plenty to like.

The 3.4-liter V-6 (185 horsepower) was enthusiastic, and the broad-shouldered vehicle handled nicely with the GT’s all-wheel drive feature.

Gas mileage was an entirely pleasing 18 miles per gallon in the city and 25 mpg on the highway — exactly in line with Environmental Protection Agency fuel-economy figures and comparatively high numbers that you won’t find on a lot of sport-utility vehicles.

How does it measure up in the cargo category? You name it, the Aztek can haul it.

Aztek features include a roof rack, a configure-it-any-way-you-want-it cargo area (with sliding tray or nearly two dozen netting options) that can be reached with via liftgate or tailgate, a flat floor that can accommodate extra-bulky packages, a removable rear seat, a 3,500-pound towing capacity (with trailering package installed) and removable utility packs in the front doors.

Aztek can be equipped with four different sound systems (including a premium Pioneer system with 10 speakers). The center console can double as a carry-it-with-you cooler capable of carrying a dozen 12-ounce cans. The vehicle can be specially decked out for biking (with interior or exterior racks), hiking or camping.

What’s not to love here?

Well, for one thing, the price. The Aztek GT with all-wheel drive starts at a fairly hefty $26,765. Dress it up with the option package of the tested Aztek — including AM/FM stereo-cassette-CD player, power driver’s seat, head-up data display, sliding rear cargo tray, security alarm, OnStar communications system and leather seating surfaces — and the price balloons to $29,580, including a $550 destinatio n charge.

Granted, a base front-wheel drive version of the Aztek starts at $21,445, but why would one want to give up all the fun things that make Aztek appeal to on-the-go outdoors types?

General Motors officials have said that they priced Aztek too high in this initial model year. And there’s some confusion over whether the Aztek was meant to be marketed to young professionals who spend their weekends outdoors or midlife career people looking for an unconventional vehicle.

I can tell you this much: I would have crawled on broken glass for a vehicle like the Aztek when I was 25 years old, but I wouldn’t — or more accurately, couldn’t — have paid $30,000 for it. And if I want unconventional, I might be inclined to think economical first.

Perhaps this explains why GM insiders are saying the 2002 Aztek will have “some price modifications.”

Likewise, GM promises some styling changes in the fall. Did the automaker really have any choice here? They have to do something now that the whole world is convinced that the Aztek is an ugly duckling.

Len Brewster, a Detroit-based auto analyst, said the Aztek could have a completely new look for the 2003 model year.

“It’s somewhat comparable to what happened with the Ford Taurus, although the Taurus was a top-seller when it went through a radical design change a few years ago,” Brewster said. “People liked it (a more-aerodynamic Taurus) at first, and then they decided they didn’t like it.

“Ford had to go back to the drawing board and came up with today’s more-conservative Taurus. Everybody’s happy again. The Aztek is probably going to go through the same process. … Expect the next generation to look a little more like a traditional SUV, but it will still have some of the original Aztek’s unique features.”

June 12, 2022
By RobDog from Dillsboro, Indiana
Used to own this car

Solid, was a great vehicle. No major issues, never let me down as my daily driver. Got rid of it a few years ago and was a huge mistake. But i would not hesitate on purchasing one again.

November 16, 2020
By Magnolia from Northern Mississippi
Owns this car

I bought this car when it was 2 years old. I had searched for one and drove 5 hours to test drive it, because this was all I was interested at the time (my previous vehicle was a Jeep Grand Cherokee that ate brakes and rode extremely rough). Test drive went well, the dealer and I agreed on a price below their asking price, and it was mine. The model I have has the split captain back seats, multi cd disc changer (5 or 6, I can't remember), sun roof, power seats, rear stereo and tailgate bench, console cooler, tent....I'm sure I'm leaving something out. The leather seats were some of the most comfortable seats in any car I ever owned. I currently own a Cadillac and I would say they are right up there with comfort comparison. When the kids were young, the rear outlets for their electronics were a lifesaver. Also the headphones where they could listen to whatever, and block out adult conversation made them enjoy it more. The rear fold out bench was perfect for tailgating and using the rear stereo system. We never used the tent or the cooler, other than for console storage. We have 5 vehicles now, and the Aztek hasn't been driven in a year, so we are selling. I had hoped to keep it, but with a husband that seems to collect sport cars, it's the least logical one to keep. It had a good run and the only thing I ever had to do to it was to get the brakes fixed (I guess new rotors??? I'm female, don't fault me for not knowing). I hated Pontiac went out of business because over the years, our family had a few Grand Prix's, a Firebird or two, and the Aztek, and never had any major problems with any of them. Goodbye old friend....you served us well. I hope a new family will enjoy you like we did.

Sad that the journey is over...

September 17, 2019
By Chrisyw,countrygirl from Kirksville Mo
Owns this car

I got this car used. It wasn't gently used either. I loved it immediately. It was over on the miles, but still looked awesome and drove great. I remember a boyfriend told me that it was on it's last legs 7 years ago. I have put another 80,000 miles on it since. It's been a great ride, but I think now 9/2019, our journey is almost over. Sigh....

News
5 Best Cars to Take to the Drive-In

All model years for the Pontiac Aztek 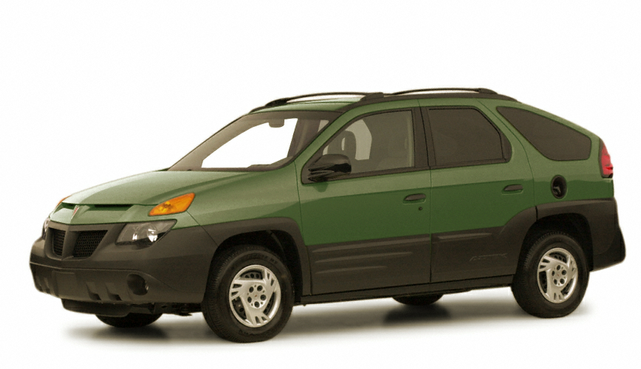 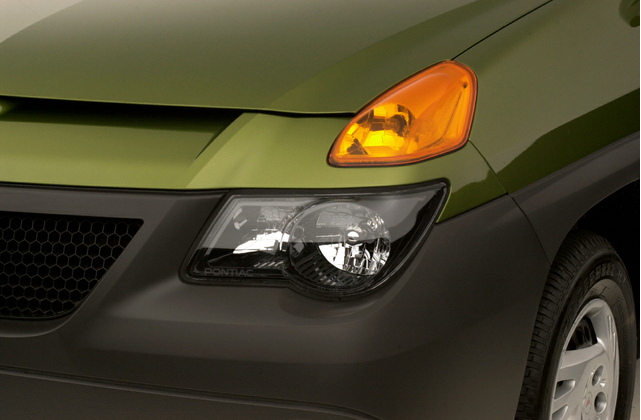 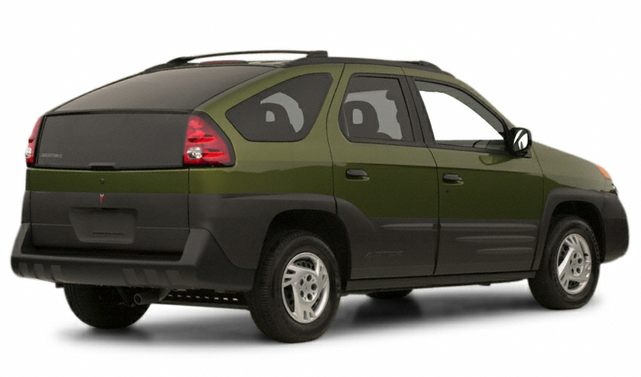 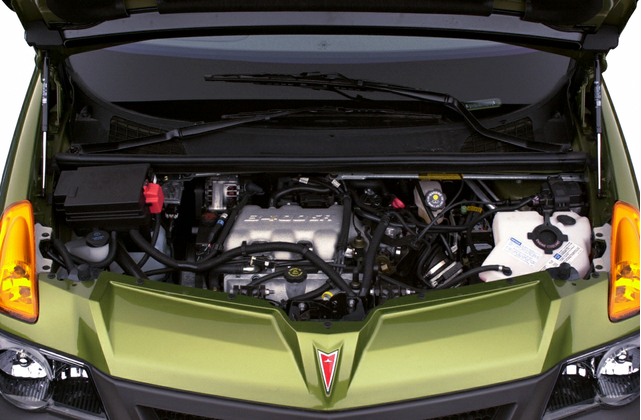 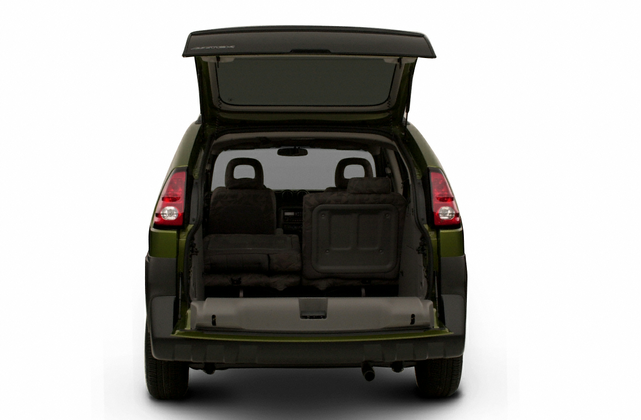 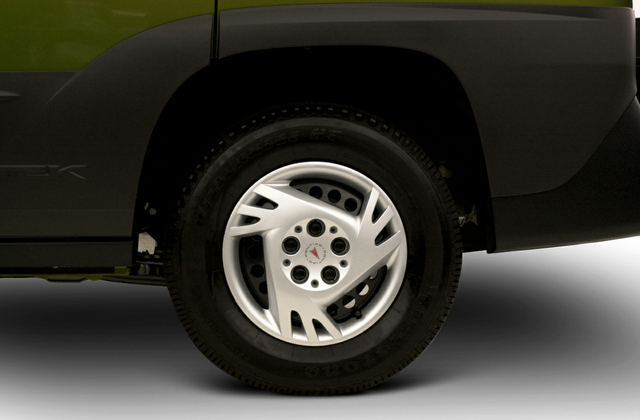 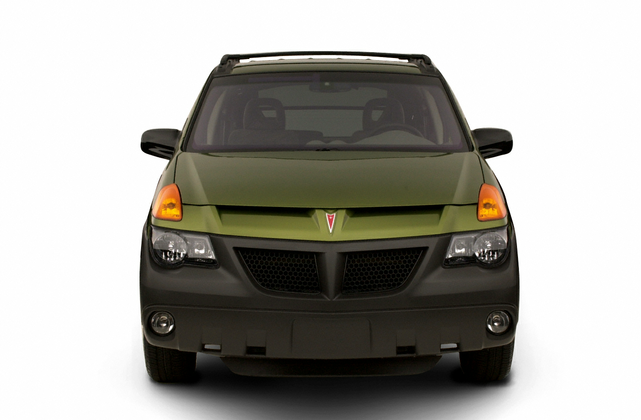 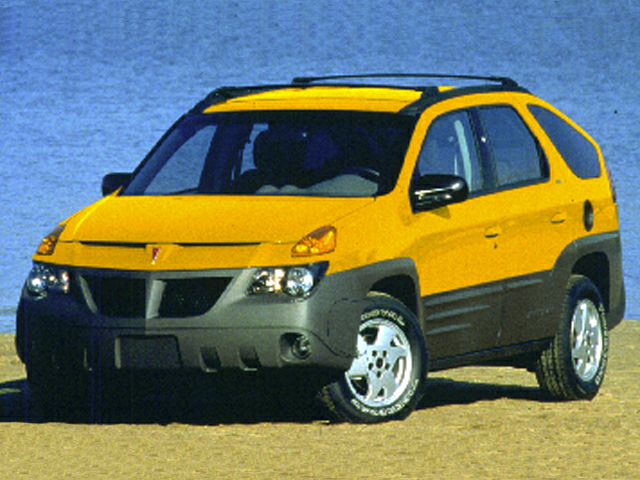 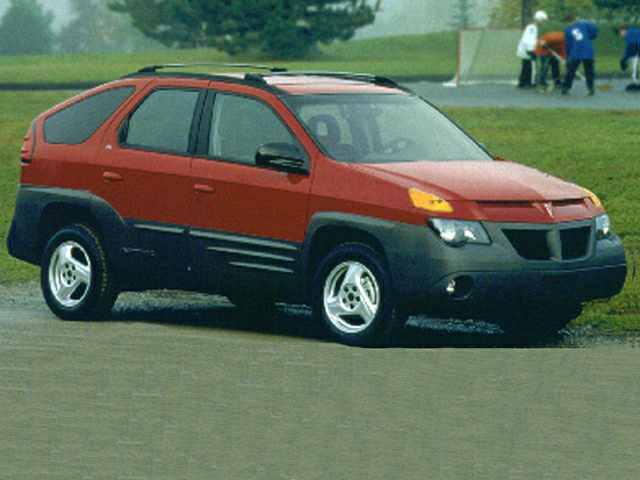 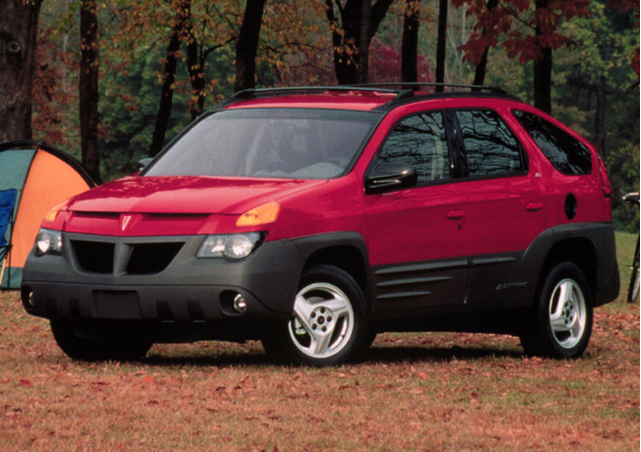 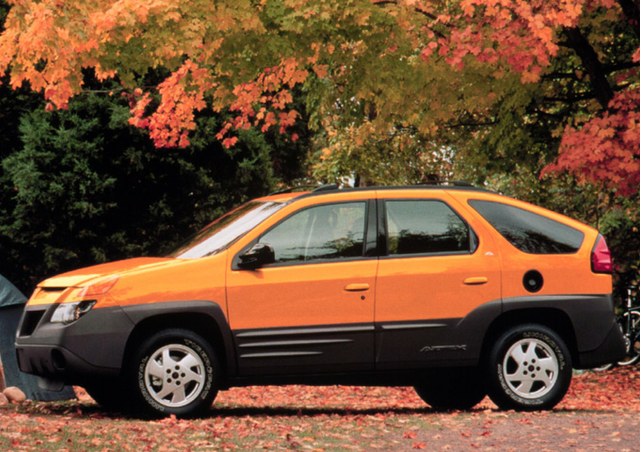 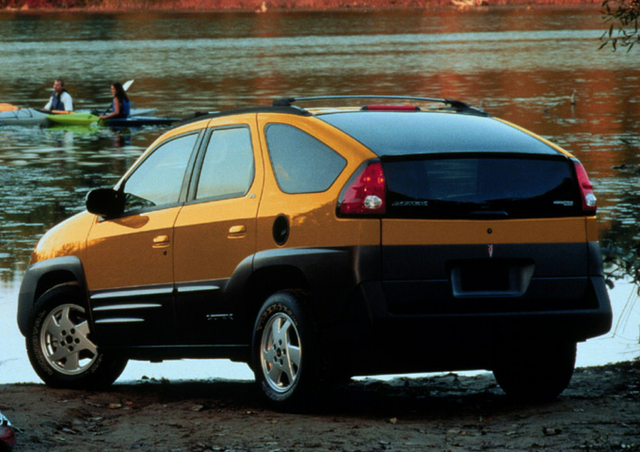 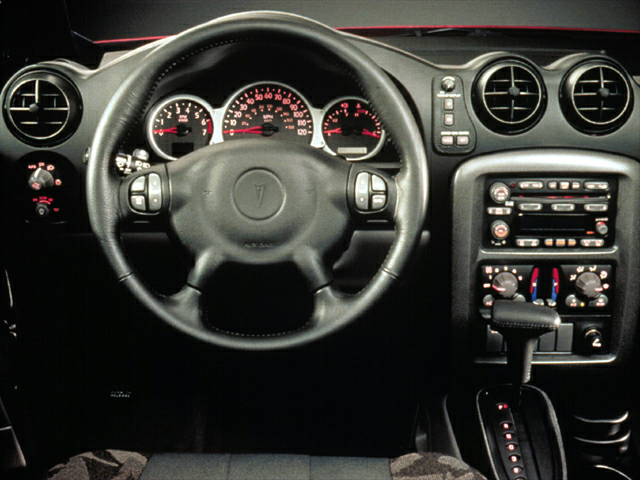 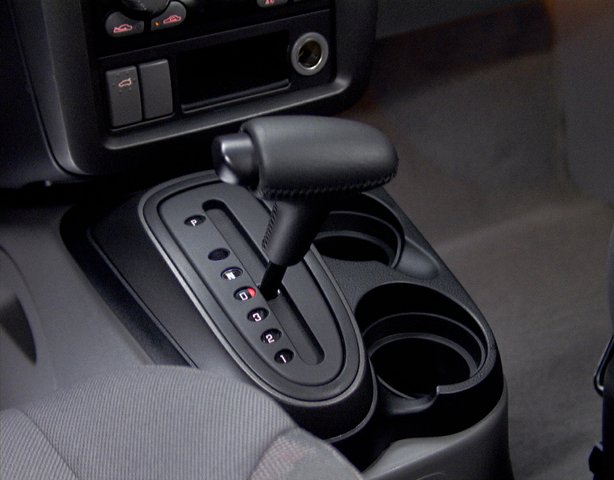 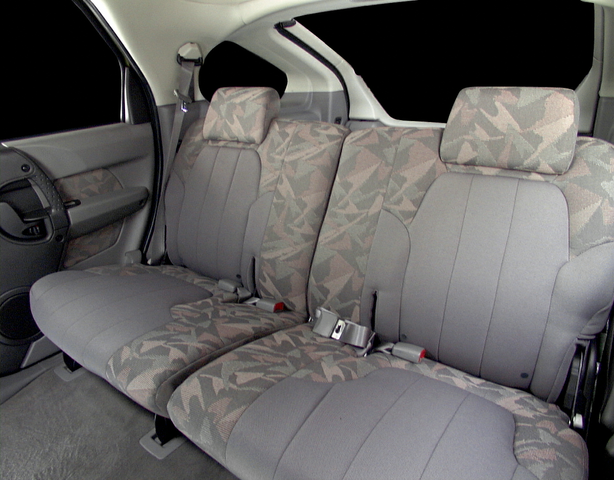 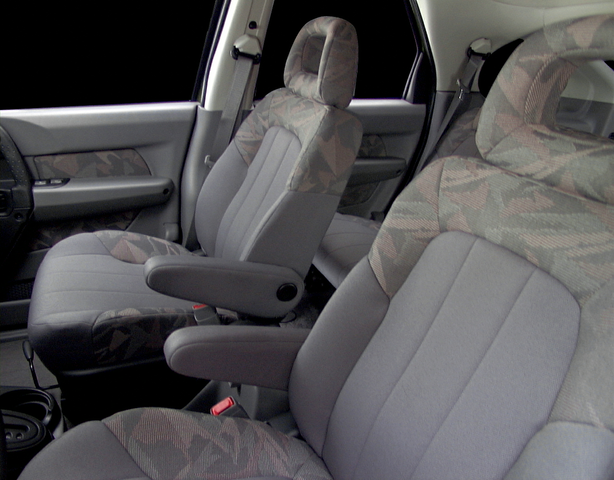 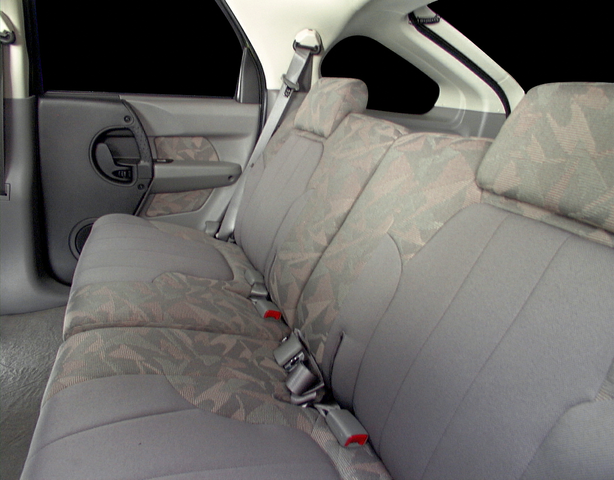