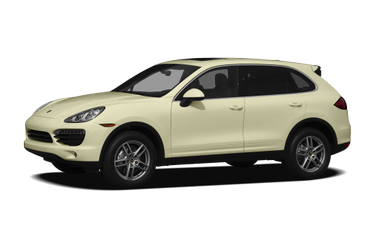 2012 Porsche Cayenne great luxury and sports vehicle combined into one SUV. Porsche has really out done it with the Cayenne. I've owned Lexus rx 350 and Mercedes ml 500. I enjoy the drive and ride of the Porsche Cayenne much better.

December 6, 2020
By TortugaPrince from Thousand Oaks
Owns this car

The only other car that compares to the reliability of this car was my 1995 Honda Accord EX. I basically only bring it in for routine maintenance. To have Honda reliability from a German car is AMAZING!!! The 4.8L engine is the foundation this reliable car. I'm not sure how the 6-cylinder engine is, so I can can only judge my 4.8 L engine in the Cayenne S. The 4.8 is also in the GTS, however I’m not sure of those owners’ experiences. I owned mine from 4 years old w/ 34k miles and sold it at 87,200 miles (4.5 yrs. later), so I can speak to the reliability of this period. I have previously owned three German Cars; a 1999 Mercedes SL500 Roadster, a 2005 BMW 645i Convertible, and a 2013 BMW 328 M-Sport. The Benz and the BMWs were always in the dealer for something wrong. Though the SL500 was the most reliable of the three previous cars with less technology to go wrong, those two makes in general are over-engineered cars and is why there is always a dozen cars waiting to get serviced when you arrive at the dealership service dept. Porsche however, I've never seen more than a customer or two in front of me or in the waiting area. Porsche Dealers have Porsche service loaners available too…Mecans and Cayenne Hybrids! Porsche manufacturer even worked with me for a blistering dash leather problem in the Cayenne (with full leather package) when it was out of warranty and offered it to me at half the cost to replace this $4500 parts and labor job. Was acceptable for a four-year-old car to be rejuvenated with a new dash! During this last year, in the cars eighth year since new, I still get notices from Porsche manufacture of warranty extensions on parts like the Speed Sensor and the Transfer Case, none of which went out on mine yet, but it’s nice to see they really want to make sure you have a reliable car and if there is an issue, Porsche will quickly take care of it. It still drives like new 8 years later. A slight door rattle in the driver and passenger front interior door by the arm rest got slightly noticeable at times after 60k miles, but that was a $65, 1hr labor, fix at the dealer with some padding near the door trim accent/ambient lighting panel on the doors arm rests. At 80k miles, it started again, so it could use another padding adjustment. The leather is very durable and still holds up at about 90% like new with very little wrinkling and side wear from getting in and out of the car. The back seats still look like new as they were hardly used. My carpets are a light blue, but a good shampoo every six months keeps the light color clean and looking about 70 percent from new, not bad for an eight-year-old car when other American cars that old can see holes in the leather and carpeted areas by then. I fully enjoy sport mode, and mostly keep it on to have that quick launch when needed to change a lane or get on a freeway, etc. It tends to lag and a launch without sport mode on which can sometimes make you lose the opportunity to get in that lane or whatever you needed that extra second of instant launch for. The 21” tires do burn through rubber quickly, cost about $225 each to replace, and I recommend rotating them regularly every 4k-5k miles, but you are rewarded with sports sedan like handling in return. The full leather package with brushed metal accents truly make this interior super premium. Base models without the leather really have a lesser than premium feel, so I recommend full leather if you can garage the car and can keep it parked out of the blistering Los Angeles sun for periods of time. Other than that, the 2012 Porsche Cayenne S is a car that if treated right with proper care and maintenance, should last 200k-300k miles.

The most stylish and fun car I have owned

May 21, 2020
By BuckeyePorscheGuy
Owns this car

I have owned the Cayenne S for 5 years and I still get that enjoyment when driving as I did day one. No complaints, just pure V8 fun.

Has been a great car for my wife; replaced with smaller Macan … Is great to drive; comfortable, safe, responsive, and reliable … If I had a third garage, I'd keep it

January 18, 2020
By Cayenne from Montreal
Owns this car

Bullet proof with luxury and performance

A most enjoyable vehicle to own Don't let the Porsche complex technology scare you As an engineer I find the Cayenne very simple to maintain Oil changes are not that expensive when you consider that you can buy the Mobil 1 Eurospec Oil at Walmart and filter on Amazon for < $75 total. You don't even need to jack the car up to access the drain plug if you own one with air suspension. Lots of online resources for all routine maintenance (Brakes, spark plugs, differential service, transmission service, coolant, etc) Buy a well maintained, low mileage, one owner preowned vehicle with no accident history from a Porsche dealer. That is the most cost effective way to own one of these vehicles.

November 19, 2019
By JerryPops from San jose
Owns this car

If you’re looking for esthetic, raw power, class and comfort. This car is right for you, it is not for the faint hearted, the don’t care, it’s for the big shots. Those who admire life’s little beauty and have an eye out for greatness. Welcome to your future driving machine.

Most Elegant car i ever owned

September 6, 2019
By JOSHDOME from Hallandale Beach FLorida
Owns this car

This car makes me feel like a Lil Boy, Im in love with it...Runs Amazing. All my life i wanted to own a PORSCHE and Can NOT Complain .

Never thought I would love an SUV (...fromPorsche)

I laughed when I heard about a Porsche SUV back when when it first came out. I gues never say never saying is proven to be right again. Bought a 2012 Porsche Cayenne for my wife two months ago. Car is in excellent condition and runs great. Within the first week, there was a minor problem with elecronic parking break showing failure erronously. I took the car back to the dealer and they had it fixed the next day (sensor replacement). It’s been two months since than and My wife loves the car more everyday. Overall I am very happy with the purchase. It is an SUV but still handles like a sports car. Crowded center console took less than I dreaded to get used to. Legroom at the back is great, fit and finish of the interioris superb! Surprisingly, with 3.6L Turbo V6, fuel consumption is better than my wife’s older BMW X5.

Rating breakdown (out of 5):
3 people out of 3 found this review helpful. Did you?
Show full review