For years, I’ve had this killer idea, if only the car companies would take me up on it: Make a minivan with plenty of power and give it macho, aggressive looks a la all the sport-utes and cute utes. Maybe now’s the time, what with all the “crossover” vehicles sticking their nose under the tent. Most of them are station wagons in ute clothing. The guest of honor at today’s roast is almost unabashedly a station wagon, although its maker in places calls it a 5-door, other places a SportWagon.

Saab has always been a bit quirky (bravo for them), but the 9-5 SportWagon is largely a good concept well executed. How many of those shopping in this price range (starting at $35K) would not treasure the extra carrying space for the Vuittons so long as it came wrapped in a performance envelope?

The 9-5 SW is based on the Swedish manufacturer’s larger sedan of the same name, that being the successor to the long-lived 9000 series. Quirkily enough, it is offered in three mechanically and visually distinct editions, all fitting within that near-luxury category the pundits sneeringly refer to.

The least expensive series is called the Linear. It features an elegant interior accented with wood and leather touches. It is propelled by a 4-cylinder, low-pressure turbocharged 2.3-liter engine. If that sounds anemic, its output figures don’t – 185 hp at 5,500 rpm and 207 foot-pounds of torque, available between 1,800 and 3,500 rpm. In a vehicle weighing 3,500 pounds, that implies more-than-adequate, if not thrilling, performance.

The next step up is the Arc series, the only one with a 6-cylinder engine. A 3-liter V design, it, too, is turbocharged. Again, the air-pusher is not overly ambitious, adding a few pounds of extra pressure to the intake stream to yield a fairly conservative gain over the Linear’s 4-banger. To wit, 200 hp at 5,000 rpm, and a little sportier torque band, flat from 2,000 rpm to 4,500 at 229 foot-pounds.

It has specific alloy wheels, and the interior trim is again a luxurious amalgam of leather and wood, along with some petroleum-derived substances. The leather is perforated and looks yummy in photographs.

The car I tested ought to be called the driving nut special, but Saab, in a nod to its heritage as an aircraft manufacturer, calls it simply Aero, as if it might take off. Priced about the same as the Arc, it takes a 2.3-liter four-holer and really turns up the turbo juice, cramming, at maximal thrust, nearly twice as much air into the cylinders as they could suck by themselves. The result is that 250 hp hits the front wheels, along with 258 foot-pounds of torque, between 1,900 and 4,500 rpm. While its sibs might be called sensible motorcars, this one’s the wild child. (One wonders what would happen if they fitted this turbo to the 3-liter six . . . .)

Because of the extra urge, Saab fits the Aero alone with 17-inch alloy wheels (16 suffices for the others). It also has a deep front air dam and some aerodynamic cues along its flanks. It, too, has leather upholstery but, because of its more gearhead orientation, trades the wood for a metallic finish on the dash – retrograde motion, if you ask me; seemed kind of cheesy. On the practical side, the midsize wagon can carry five folks plus 37 cubic feet of gear – double what a large car’s trunk can hold. The rear seats fold down 60/40, and when both are flat, there’s 73 cubic feet to stuff.

On the wicked side, this 3,600-pound machine can sprint from dead stop to 60 mph in less than 7 seconds. Oh, what fun to pull away from sporty little cars, with their under-powered little engines, in a stinkin’ wagon!

At first blush, the Aero didn’t seem all that peppy, but I soon learned that the Swedes had built in lots of accelerator-pedal travel, perhaps to avoid the twitchiness that would result from its being closer-coupled.

I quickly discovered I could awake the sleeping giant by giving the rightmost pedal a really good shove. Being a high-pressure turbo, it comes on strong when the revs climb through 4,000. Saab could eke out even more power, but has wisely tuned the engine to provide a broad torque curve, much more suitable for American conditions. What with engine roar and tire noise I could not detect the characteristic turbo whine . . . pity, one case where I’d go for less noise deadening.

There is at least a “boost” gauge to show how much the turbo is contributing. I think those of us who are into turbos would also appreciate an oil temperature gauge, especially if there’s any towing to be done. Saab qualifies the wagon for towing up to 3,500 pounds – they evidently have a lot of faith in the water cooling jacket wrapped around the turbo.

The one I tested had the five-speed manual transmission. It would be silly to equip this model with the five-speed automatic. Clutch action was gentle and gear changes were effected fairly easily. The Feds have not yet gotten around to crash-testing the 2002 9-5s.

The Insurance Institute for Highway Safety has, however, in its more rigorous 40-mph frontal offset drill. IIHS labels the 9-5 a “best pick” in the midsize luxury category, alongside the Mercedes-Benz C Class, which beat it in one category of occupant protection. The 9-5s all have frontal and side air bags for the cockpit crew, but nothing for the rear passengers save the seatbelts.

EPA ratings on the 9-5 SportWagon are 22 mpg city, 30 highway. I did quite a bit of running on the highway, certainly keeping up with the flow, before challenging the backwoods of Indiana. All in all, I got 20.8 mpg, but I really was trying to hear that turbo. Premium fuel, please.

The SportWagon has traction control, which is useful at this power level to keep the front tires from divorcing the pavement. I noted little tendency toward wheelspin, however insistent the accelerator pushing, and the torque steer encountered under full-bore conditions was just enough to remind one that this is a front-driver. The steering was quick, with good on-center feel.

The Aero is blessed with what Saab calls a sport suspension. It was not too firm, and filtered minor road shocks exceptionally well, as befits a luxury ride. A tight chassis and liberal use of sound-suppresive materials made the cabin comfortably quiet even at freeway speeds over rough concrete – the better to enjoy an especially nice Harman Kardon 8-speaker stereo, with AM-FM-CD-cassette inputs. The tires on the Aero are 225/45 Michelins. They had a great affinity for asphalt and concrete, allowing curves to be taken rather hard with little fuss.

Watching over the exuberance was the Electronic Stability Program, a feature becoming common in this class and above. Using a variety of sensors, it refuses to let the driver ask for more cornering force than might be available. It accomplishes this by cutting power and or applying one or another brake.

Granted , a front-driver with 60 percent of its weight on the front wheels just can’t be as much fun as a better-balanced pusher, but the Saab’s ESP was quite unobtrusive, even allowing a bit of power sliding.

Should all else fail, the PowerWagon has powerful disc brakes, fore and aft. Easily modulated, they had a solid feel and brought the wagon up sharply in my simulations of panic stops.

Base suggested price on the Aero is $39,350. The tester had a visibility package (xenon headlamps, rain-sensing wipers, rear sonar) for $650, so, with freight, bottom line was $40,625. Edmunds.com indicates that most folks are negotiating a $1,000 markdown. The Linear would be adequate, for about 5 Gs less. The comparably-priced Arc, with automatic, would be the better pick for all but the most serious drivers. At the suggested price, the test car would cost you $824 a month, assuming 20 percent down, 10 percent interest and 48 installments.

2002 Saab 95 Arc Wagon. Advanced design and features found on much more expensive cars, fast, smooth and reliable. Power band run 20 mph to 90 mph, so you can pass with ease, top speed is 142 for mine and is very comfortable at speed with no signs of stress or struggling even going up steep hills, brakes are great too, just top a hill and see granny in the left lane doing 55 when you are over 120 and you will respect the engineering that goes into these cars. Yes I slowed down and did not hit her, yes she needed to go change her Depends.

Comfortable and sporty sedan. Drives and handles great on the road and in winter conditions but not the easiest when it comes to repairs.

The car has great visibility and I like the design

The looks smart, gets good mileage and has that extra power with the turbo when needed. Parts and mechanical expertise are lacking in the market place but the used and salvage markets can get you through the issues that will come up 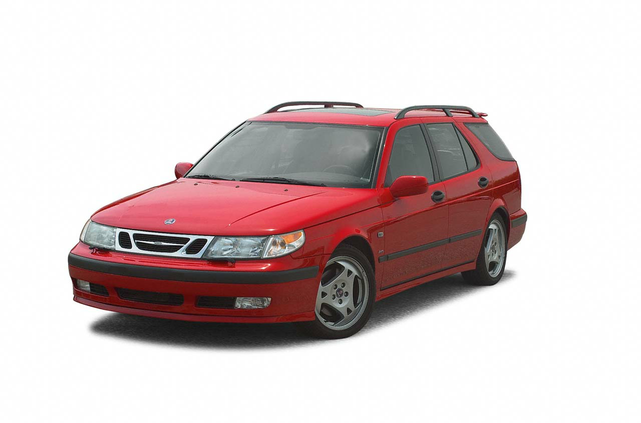 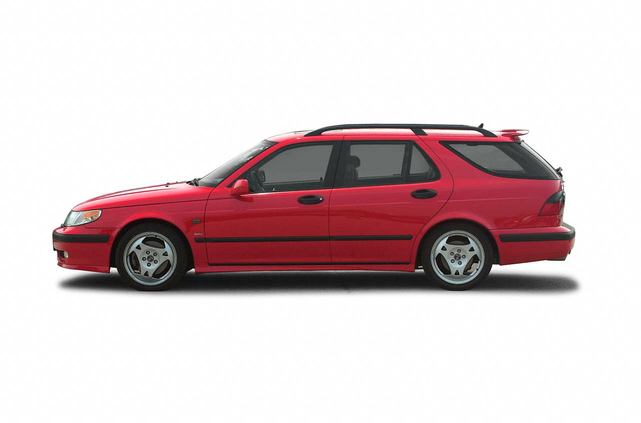 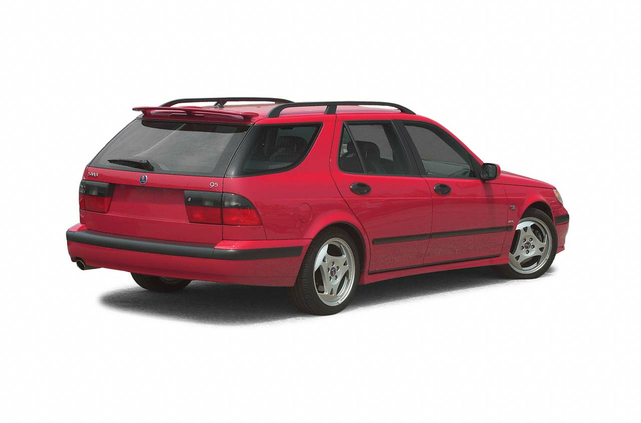 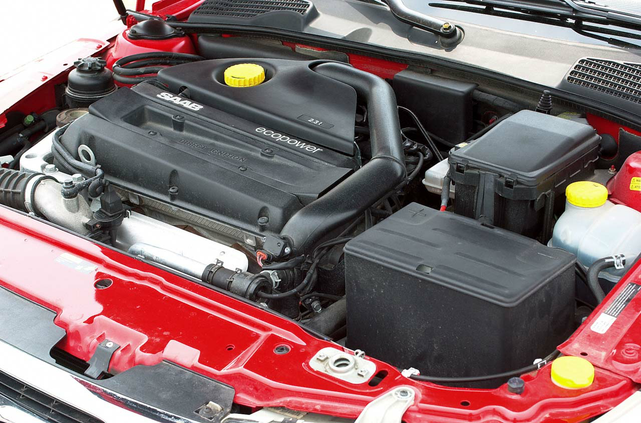 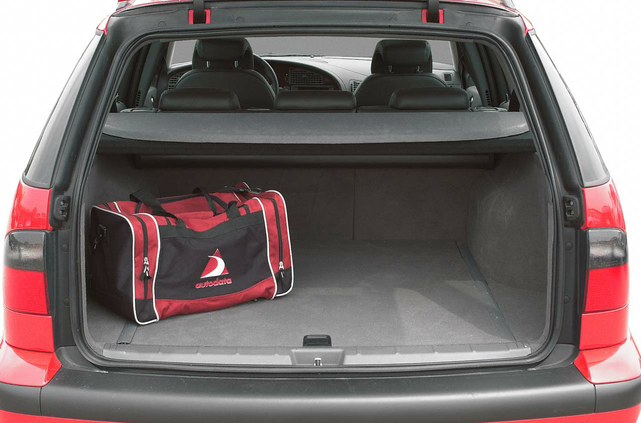 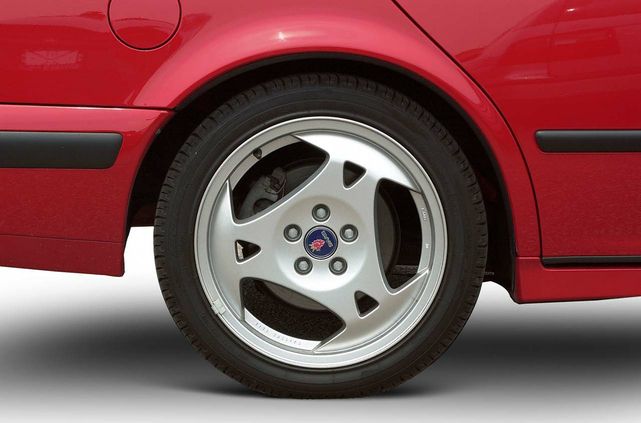 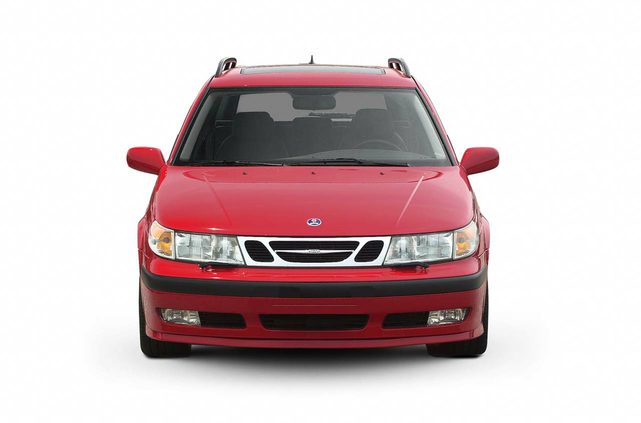 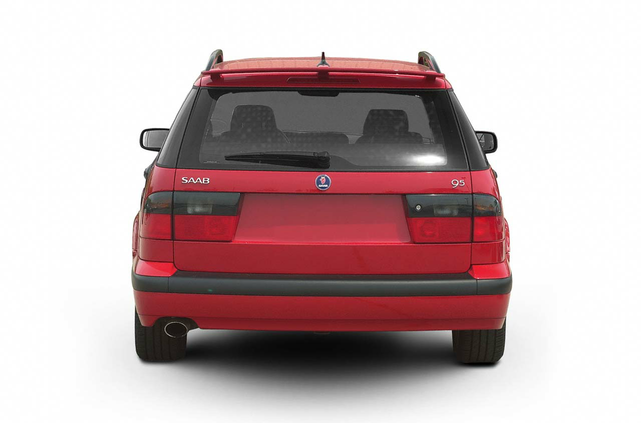 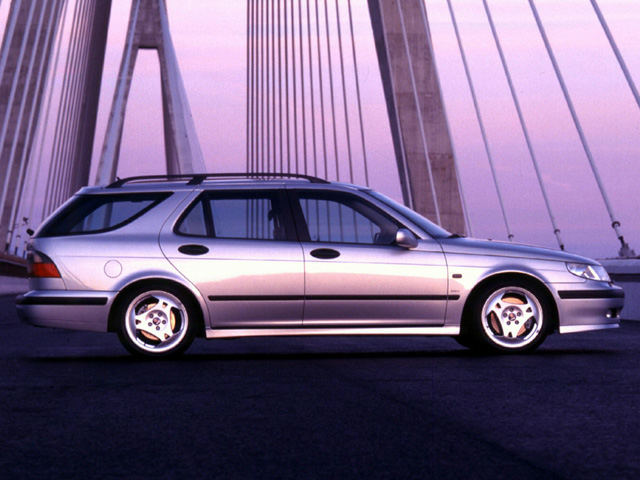 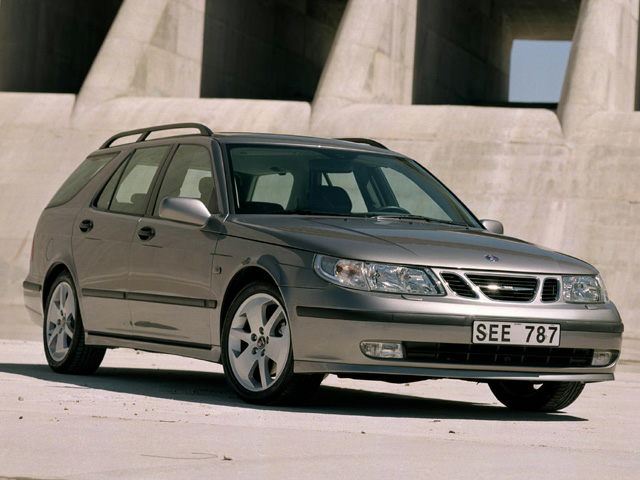 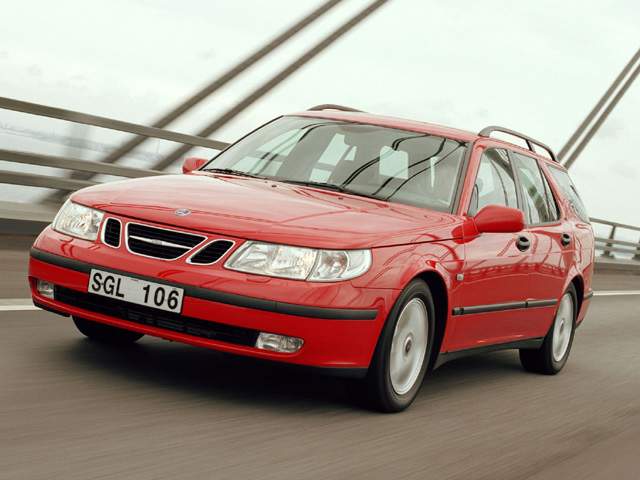 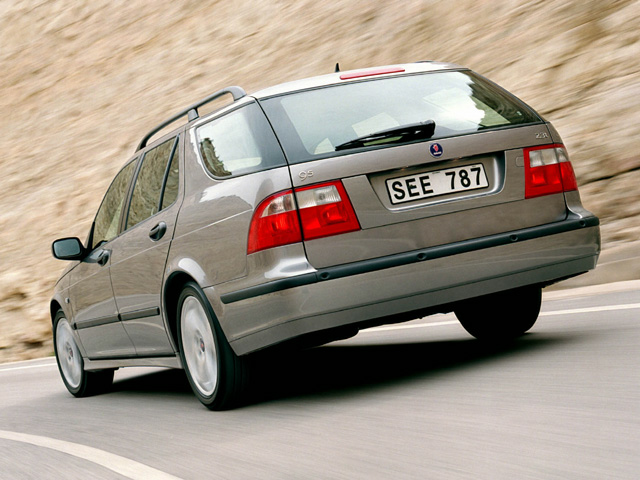 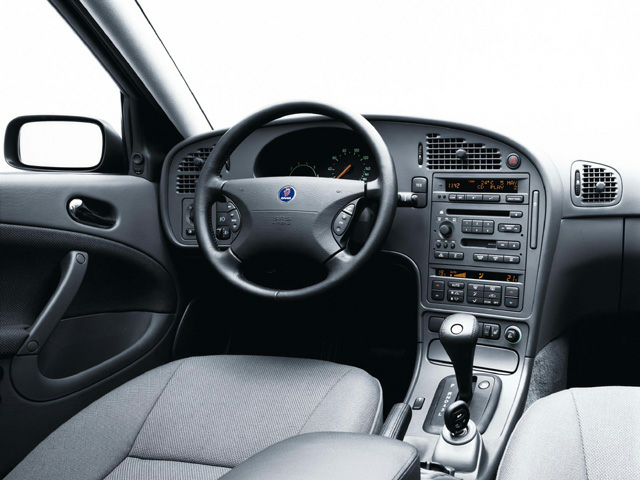 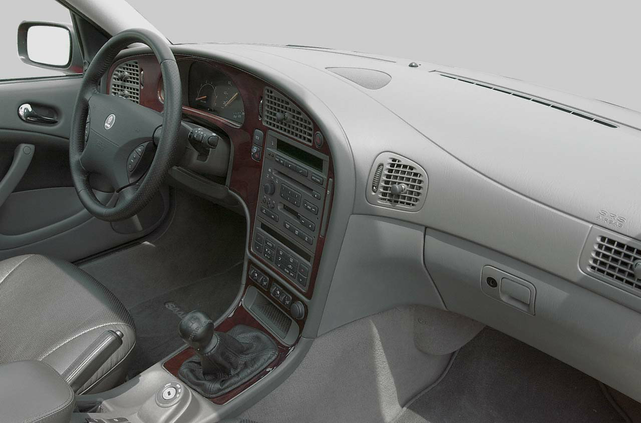 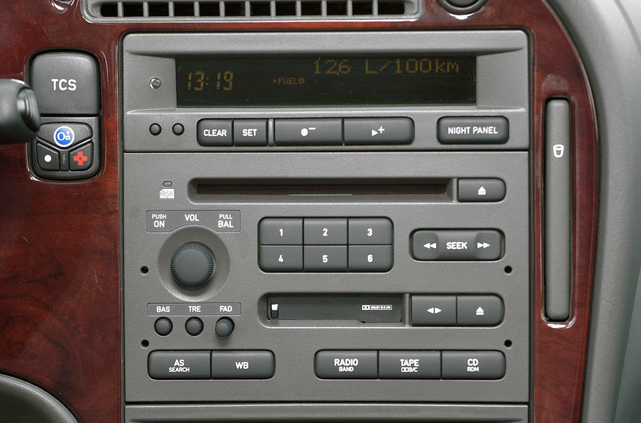 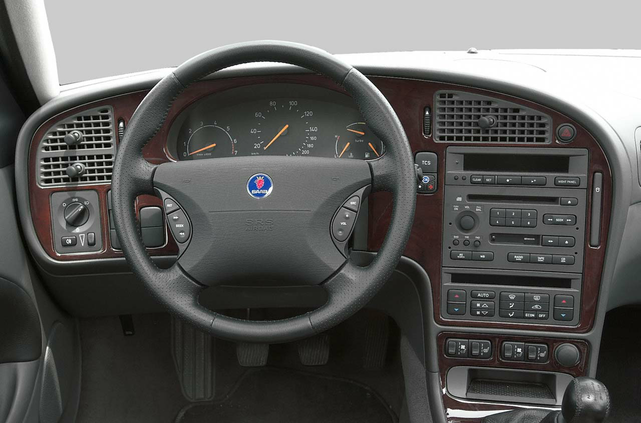 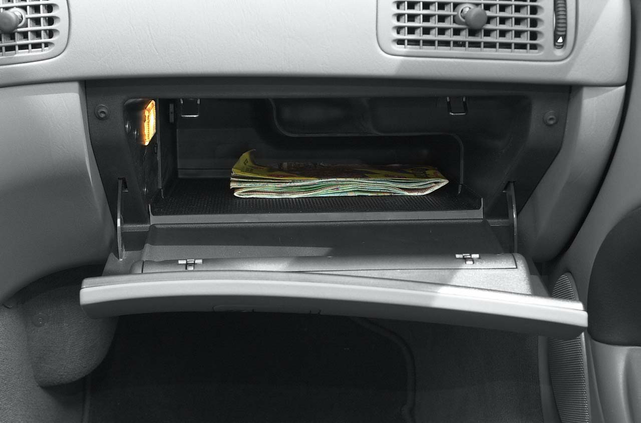 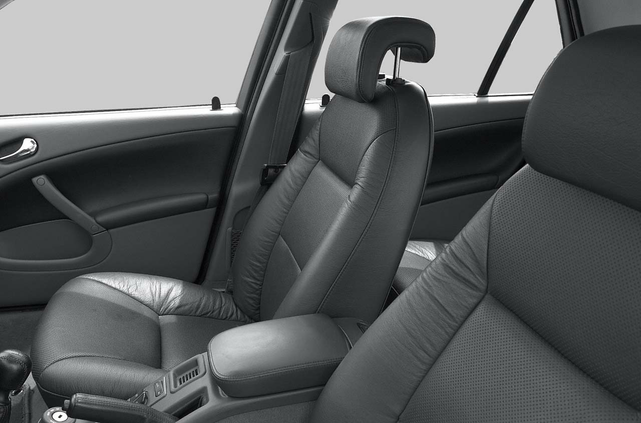 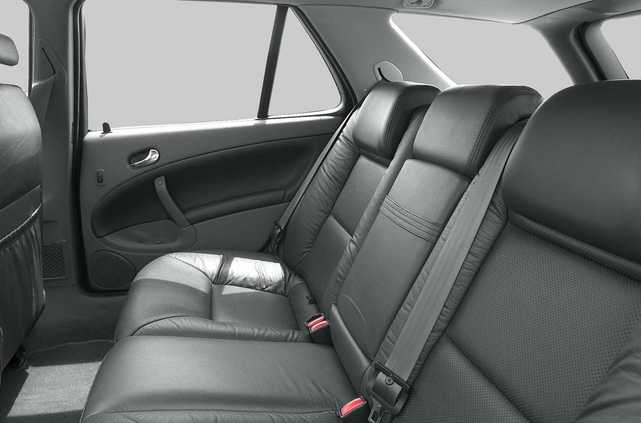 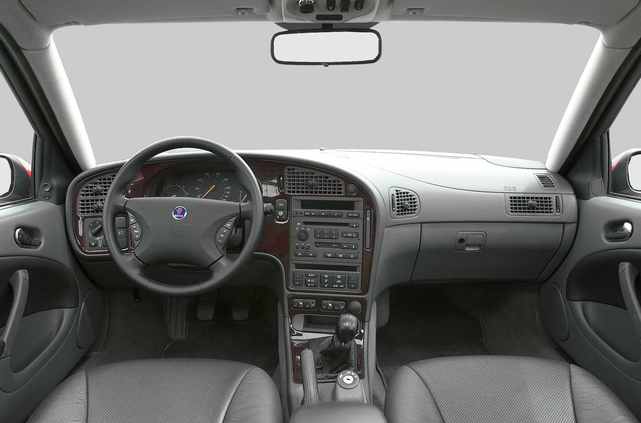