Our 2002 Suzuki Grand Vitara trim comparison will help you decide.

Before confusion sets in, or we knock our knees against another dashboard, let’s provide a few clarifications about the 2002 Suzuki Grand Vitara.

One, when it comes to proportions, it’s not really all that grand.

“It expresses freedom, adventure and a zest for life,” Suzuki says, providing some lexicon relief.

Try to squeeze a couple of six-footers into the Grand Vitara, and you’ll be left with a grand case of leg cramping.

Cute, effective, sprightly, jiggly and affordable fit the Vitara. Grand it is not.

Actually, its real meaning, we found out, has more to do with engines than volume. All of which leads us to another mystery about this Suzuki.

In Vitara terms, Grand actually refers to the engine, a 2.5-liter V6 first introduced in 1999 as a brand-new all-aluminum powerplant that was state-of-the-art in terms of cams (four, two on each bank of cylinders) and valves (24), and the only V6 in its class when it first hit the streets. But it, too, isn’t the kind of power that leads to delusions of grandeur.

Back then, at 155 horsepower, it was underpowered – relatively mild output given its nearly 3,200 pounds of curb weight, and 400 pounds heavier than the previous Suzuki Sidekick.

When the field changed, it became very underpowered. Where there used to be no Jeep Liberty, Ford Escape or Mazda Tribute three years ago, now there are V-6 heavy-hitters. The V-6 Escape comes with a 3.0-liter V6 that makes 200 horses and the Liberty comes with a 3.7-liter, 210 horsepower V6.

So why not beef up the Grand Vitara for 2002? Suzuki tried, adding 10 more horses this year.

At least it sells – about 6-to-1 more than its smaller, four-cylinder Vitara cousin. And both are handily outsold by the Chevrolet Tracker, which shares their Suzuki-sourced body-on-frame design. The four-cylinder Vitara comes as a two-door convertible or four-door wagon. Grand Vitaras only come as four-door wagons. All offer rear-wheel drive (JLS models) or 4WD (JLX) that must be disengaged on dry pavement but includes low-range gearing.

But it’s not really a wagon. Here again is where definitions come in handy.

Wagons are meant to cart lots of people and lots of things. The Grand Vitara can carry some people and some things. Its overall cargo volume (44.7 cubic feet) exceeds only that of a Kia Sportage two-door convertible. Everything else blows it away. Space is saved by latching the spare tire onto the back door, but seat folding is nearly mandatory when more than a few bags are packed. Even the swing-out door opens, confusingly, to the right, hampering curb-side loading.

Up front things are tight as well. A 6-foot-4 friend couldn’t squeeze behind the wheel, even with the front seat pushed to its limit. And a 5-foot-8 passenger complained of knee knocking on the front dash.

Of course, that could have been the ride quality getting in the way. The Vitara was uncomfortably choppy on all but smooth surfaces, even with the longer wheelbase on the “wagons,” and although handling was competent, cornering grip seemed average and not all that inspiring. And pack the ear plugs. On highway driving, wind and road noise was constantly a problem and, when hammered, the engine let out a gruff roar.

On the outside, the Grand Vitara is an attractive machine – no more boxy Sidekick or unappealing Tracker yesteryear. With rounded sheetmetal it was easily confused by some for the attractive new Liberty. With a low step-in height its stance is one of the best in its class. Inside, the instrumentation, though plastic and placed far from the driver’s reach, was logical.

But you can survive only so long on looks alone.

Fuel economy wasn’t great for such a mini-me SUV – about 18 mpg (city) in the V6 4WD and 20 on the highway. And driveability, although tight, compact and capable off-road, isn’t the kind of fun you’d expect from a vehicle this size.

But at $18,599 for the five-speed manual Grand JLS 2WD, it’s just about the price you’d expect. In the JLX trim, $2,100 more will get you standard equipment that includes four-speed automatic transmission, power steering, a 4WD transfer case, remote keyless entry, air conditioning and power windows and locks, to name a few.

And that jumps about $4,000 more for the upscale Grand Limited 4WD automatic.

At which point you have to ask yourself a few questions.

Like, for starters, is a Grand that’s not all that grand worth 23 grand?

Maybe when you can tell us what Vitara really means.

Need a lot of repair work, more than the car cost.

Rating breakdown (out of 5):
3 people out of 5 found this review helpful. Did you?
Show full review
4.4

I love the convenience and reliability of this car. I have horses so need to load up hay and grain weekly. The Suzuki is super convenient with its swing back door for my purposes. Always starts right up and goes anywhere.

Rating breakdown (out of 5):
3 people out of 5 found this review helpful. Did you?
Show full review
4.0

Interior is perfect size for average woman. Handles well in town and on hwy. Although it is a mini suv, it has plenty of room for bi-weekly grocery trips. No special amenities.

Rating breakdown (out of 5):
0 people out of 1 found this review helpful. Did you?
Show full review
See all 5 consumer reviews 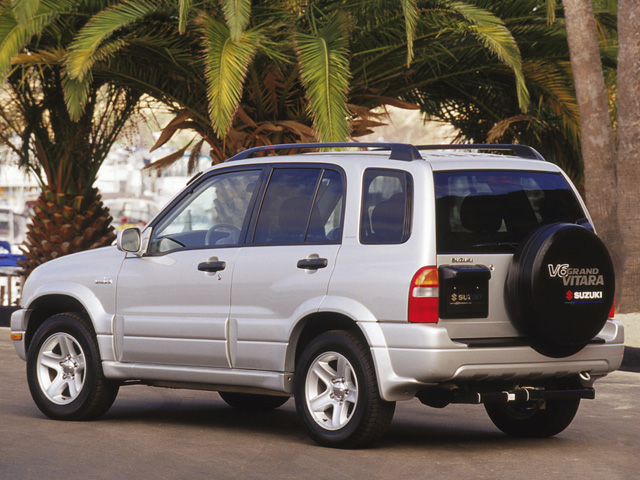 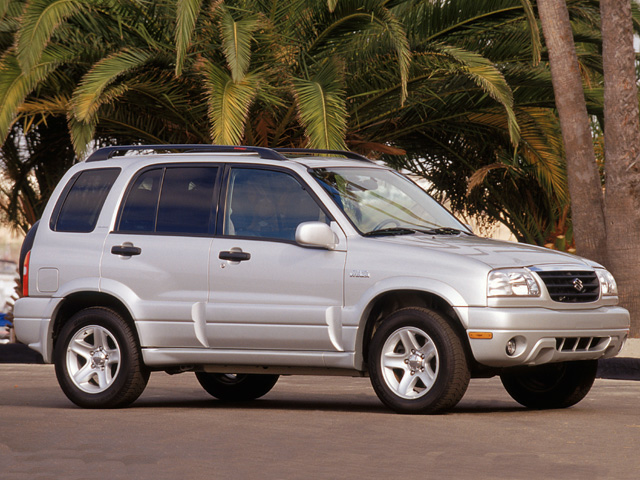