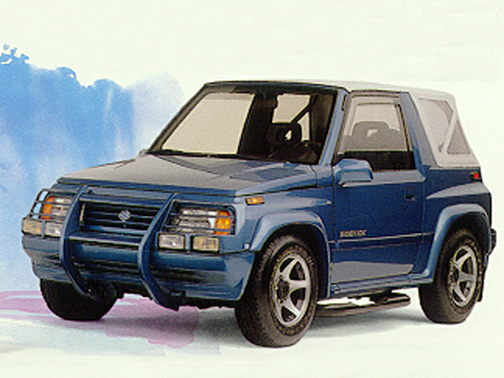 Our 1994 Suzuki Sidekick trim comparison will help you decide.

I received a frantic call from Suzuki’s U.S. headquarters in California after I test-drove a 1993 Suzuki Sidekick four-door last year.

Suzuki’s public relations personnel were in a damage-control mode because the vehicle I tested and wrote about was falling apart.

I reported that numerous interior panels were loose. And the gas-cap door refused to open, leaving me stranded at the gas pump with a mob of fuming motorists queued up behind me.

Suzuki officials said my 1993 test vehicle did not fairly reflect the Sidekick’s quality, and they wanted to know if I would give it another chance.

I agreed. I know that the vehicles placed in an automaker’s test fleet can take tremendous abuse at the hands of overzealous auto writers.

In any case, after driving a 1994 Sidekick, I believe Suzuki is right. This week’s test Sidekick – though still a long way from perfect – was in far better condition than last year’s vehicle.

Curiously, the gas-cap door on this week’s vehicle still did not open when I pulled the release lever under the driver’s seat. I finally pried it open with a key.

The 1994 Sidekick was not a factory-fresh tester, nor was it given any special treatment. It had more than 3,000 miles on the odometer. The Orlando Sentinel was its last stop before being retired from Suzuki’s test fleet.

Now that that baggage has been unloaded, here is the bottom line: The Sidekick is a decent value. And it can be a to-drive city vehicle if you get it equipped the right way.

Our test Sidekick came outfitted with a five-speed manual transmission. I am convinced this is the way to go if you buy this vehicle.

I found during last year’s test drive that the optional automatic transmission drains too much power from the Sidekick’s 1.6-liter, 16-valve engine. That can make acceleration sluggish and passing slower traffic nearly impossible.

With only 95 horsepower available, thefive-speed does a better job of getting power to the wheels than does the optional four-speed automatic. In most instances, you will not have to alter your driving habits to conform to the vehicle’s lack of power. But you need to be aware of the Sidekick’s capabilities when, say, merging into traffic on an interstate.

The clutch pedal moves smoothly and easily; so does the shifter. Our test vehicle was outfitted with four-wheel drive, but I did not test it off-road.

On a long highway trip, the Sidekick logged 30 mpg with the air conditioner running.

Generally, the Sidekick is a competent and stable four-wheel-drive vehicle when used normally in city driving.

But I discovered two conditions where the Sidekick does not perform well.

First, it can become momentarily difficult to handle if a tractor-trailer truck passes it on an interstate at a high speed – say, 65 mph. The gust of air generated by the truck can easily knock the lightweight Sidekick into t he next lane or onto the shoulder of the road if the driver is caught unawares.

Also, because the Sidekick’s soft suspension system lets it lean considerably in corners, sharp turns must be approached with extreme caution. And sporting maneuvers are strictly verboten.

Perhaps a firmer suspension system would give the Sidekick a more inspiring ride.

As it is, the suspension is soft, but it does do a reasonable job of absorbing bumps.

The power-assisted steering is not all crisp or noteworthy for its responsiveness. But it is adequate. So are the brakes. They get the job done, but nothing more.

Except for the gas-cap door that would not open, this week’s test vehicle seemed screwed together tightly.

But I did have a problem with the layout of the interior. Looking out through the rearview mirror revealed nothing less than a visual obstacle course. The two rear-seat headrests and the spare tire – mounted on the swing-out r ar door- obstruct your vision. However, two large door-mounted mirrors help the driver see what is behind him as well as what is to the side.

Several of the dash and stalk-mounted switches were difficult to reach. The cruise control master switch, for instance, was located on the dash behind the steering wheel. To operate the switch, I had to reach between the steering wheel and the dash. It was a pretty tight squeeze.

But the cloth-covered bucket seats were comfortable. The rear seats fold forward and provide enough interior room to allow you to carry a full-size bicycle with the rear door closed.

The air conditioner worked well, but the radio seemed cheap. The sound distorted as I raised the volume.

The Sidekick is the lowest-priced, four-door sport-utility you can buy. It gets good fuel mileage, and I feel that it offers reasonable quality.

And with a stick shift, the Sidekick is peppy, almost enjoyable to drive.

Truett’s tip: If you can live without a lot of power, the Sidekick four-door can be a useful city vehicle.

A Class of Its Own

January 26, 2018
By sublimejackson from CA
Owns this car

Overlooked and under estimated is Suzuki's line of small SUV's, specifically the Sidekick and Vitara Models. These 'rigs' definitely suffered in styling and interior room but, underneath all that is probably one of the greatest small SUVs you can buy! It has a rigid body-on-frame design and real 4WD system with low range. No flimsy uni-bodies here! Add that all up with it's light weight, small foot print, fuel efficient motor and you have a very fun and capable SUV that is simply in a class of its own. There is also no need to sacrifice a bit of luxury... Mine has the JLX package which includes power windows, locks and mirrors, A/C, Cruise control, Tilt wheel, rear wiper/defrost, 4 speed automatic transmission w/ overdrive and it all works! One more great tid bit about the Vitara/Sidekick is they can tow as well as be towed! Even with an auto, just pop the t-case in neutral and you are ready to roll! You simply can't get a more rounded vehicle for the money.

This was my first car, and buy, what a ride to start with! My family has owned the vehicle since 2006, and I got the vehicle 2014/2015, and have used it as my daily driver ever since! This fun little car has NEVER failed me once! Always started in the dead cold of winter, and never needed anything more than breaks and other normal maintenance since my family owned it! Being built in 1994, it lacks many of the conveniences taken for granted today in modern cars, but it makes up for that in its stellar reliability, size, handling, and stereo system! It's so small, any parking spot IS YOURS! I once parked next to a 2004 VW Golf, and the Sidekick was EVEN SMALLER than it! I'm constantly amazed this 2-door soft-top vehicle is technically classified as an SUV! This classic, querky car is an absolute dream, and I cannot praise it enough! If you ever have the chance to pick one up in good condition, DO IT!

an attempt at the perfect vehicle: 4WD, convertible, good mpg, easy to drive and park, I really like it

All model years for the Suzuki Sidekick 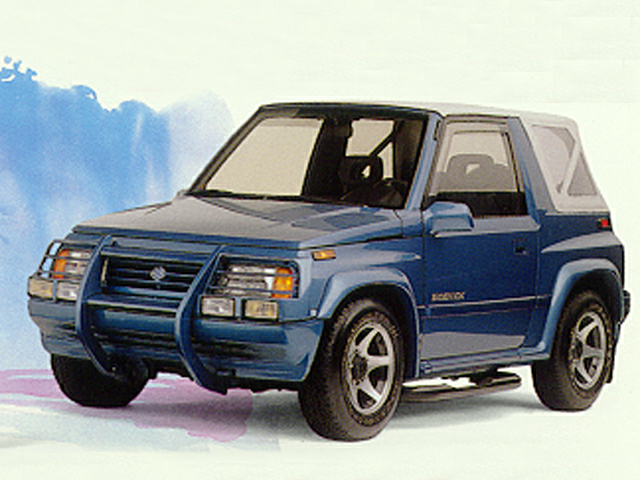