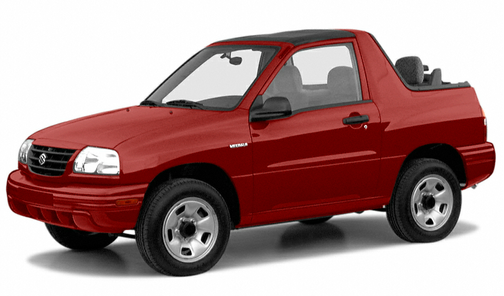 Our 2001 Suzuki Vitara trim comparison will help you decide.

Your daughter would love the Suzuki Vitara two-door – it’s the quintessence of cute. I suspect it’s too cute by half for most boys, and most grownups would feel a bit silly in it. Suzuki, though it’s Japan’s smallest automaker, has a dazzling array of models and variations thereof, especially in those lines that are built in North America, as Vitara is (in Ingersoll, Ontario).

The pocket-sized Vitara two-door is their smallest mini-ute, and it’s the one with a soft top. The four-door Vitara has a steel roof, as does the more opulent Grand Vitara. This is obviously a case where a spirit of fun prevails over such old-fogey considerations as practicality and safety.

Still, I question whether any new driver should be put into any kind of sport-utility vehicle, lest the aura of omnipotence lead him or her into trouble. This is especially the case with such a tiny thing as the two-door Vitara, whose short wheelbase (a mere 86.6 inches) could predispose it to rollovers. The four-door, hardtop version has nine inches greater separation between the axles. The most directly comparable vehicle is that old soldier that never fades away, the Jeep Wrangler, and small as it is, its axles are 93.4 inches apart. (A midsize car has 100+ inches of wheelbase.)

The Vitara has removable side window panels, a removable rear window piece and a removable sunroof. The side and rear pieces incorporate plastic windows which can be taken off by means of exterior-mounted zippers and Velcro fasteners.

The sunroof latches to the front windshield (quite facilely) as a convertible top would. It can be unfastened from the windshield and tossed back over the roof to create a smallish view of the sky, or completely removed along with the other panels to create an open-air ambience. It is tempting to remove just the rear window for flow-through ventilation, but I quickly discovered that’s a bad idea (as I later found is laid out explicitly in the owner’s manual).

Happily in this case, the Vitara has a stinky catalytic converter. Zooming around at a variety of speeds, I soon noticed that exhaust gasses filled the interior. Along with the malodorous components, there must surely be carbon monoxide, odorless but deadly.

Suzuki says if you must operate the vehicle in this configuration, be sure the heater – AC controls are set to bring in fresh air and put the fan on high. I did not notice an odor when I operated the machine with the (glass) side windows down and the sunroof and rear window open, but that’s still probably not a good idea.

Needless to say, security in a vehicle of this type is virtually nil. A pocket knife could easily breach either the windows or the cheap-looking plastic top.

With everything zipped up, the Vitara was not excessively noisy at highway speeds. When the sunroof was open, its cover flapped about rather unpleasantly.

The Vitara is built like a truck, with a body plac ed upon a ladder frame. This approach sacrifices some ride quality for the ruggedness you’ll appreciate on non-paved surfaces, although I found the ride remarkably good – considering – on even fairly challenging pavement. Pitching motions were less pronounced than the wheelbase number would suggest, and roll was well-managed.

The Vitara, in four-wheel-drive form, is truly ready to go brush busting. It’s not all-wheel-drive, like most of the new crop of “crossover” vehicles, but actually 4WD, with a mechanical linkage between front and rear axles, and even a low range for really rough situations.

The transfer case on the tester was quite poor. It’s allegedly “shift-on-the-fly” (up to 60 mph), but I found it quite reluctant to change from 2High to 4High at any speed. It would either grind the gears or appear to go into 4High, as indicated by a dash light, while making a nasty noise and eventually popping back into 2High.

Resorting to the manual, I found Suz ather candid. They say the wheels must be pointed dead ahead to try this maneuver and, if it’s unsuccessful, to stop the vehicle and then go into 4High, as you must with 4Low. That could be a problem if you’re in a situation where you want to preserve momentum; it’s simply the worst implementation I’ve encountered.

The tester was equipped with the four-speed automatic transmission, an upgrade from a five-speed manual. It had a “sport” setting which delays upshifts and unfortunately also makes shifts rather rough. In normal mode, it behaved well, even downshifting rather intuitively when situations demanded it. Gearing is such that there’s quite a bit of compression braking, even in overdrive top gear.

(Here’s a little secret: Suzuki makes almost identical machines under the Chevrolet Tracker label; those alone have the option of a 2.5-liter V-6 engine, though only in the four-door variants.)

The engine is quite content with regular gas, and according to the EPA is worth 23 mpg city, 25 highway. I experienced 21.7, but that included some aerodynamically “dirty” running, and a bit of off-road slogng.

The steering felt rather leaden and slow, though it has power assist. That’s probably a worthwhile compromise, because it makes the Vitara seem less frisky and thus less likely to be pushed into maneuvers for which it’s unsuited. Slow steering is also an advantage in off-road situations.

On the whole, handling was fairly good. The hefty 215 – 65 – 16 tires get some credit for that. They are provided on the 2-liter 4WD machines, while the lesser lights get still-decent 15-inchers. The Vitara steers a steady course down the freeway, without a lot of twitchiness.

Antilock brakes are not even optionally available, and the sundry series all have ventilated discs front, drums rear. In simulated panic stops from 60 mph, I noted fairly severe slewing as the wheels locked up without benefit of sophisticated front:rear proportioning – it’s not too far from that to a roll.

One plus is a vertically-adjustable shoulder belt anchor, not always found on cheaper cars. Another is a pretty decent radio, with AM, FM and a CD player standard. Tuner sensitivity was above the median and sound quality good enough, considering the ambient noise level.

Vitara gets four stars out of a possible five for occupant protection in a frontal impact, and four (front seats) and five (rear) for side impacts in government tests.

The cheap est Vitara is the two-door, two-wheel-drive JS with manual transmission. It starts at $13,899. The one I tested was a JLX with 4WD and automatic, and it was way uptown at $17,999. This includes power windows, locks and mirrors, plus air conditioning. They get another $1,600 for alloy wheels (not from me, they don’t). Final price of the tester was $18,469, with freight. The research firm Edmunds suggests you can bargain that down by nearly $800, in a typical market area.

Do check the Chevrolet cousins, and, if you’re serious about doing it in the woods, the Wrangler. If your usage is mainly commuting, I think you’ll find the Suzuki products more comfortable.

Bought this truck used with about 19k miles and sold it with 115k. This truck chassis SUV is tough and rides like a truck. The 2.0 liter 4 cylinder engine was ample but more HP is always welcome. This little Rhino (What they are called in Europe), has taken me anywhere I wanted to go. Snow, sand and trails were all welcome challenges and I always felt in control. The 5 speed transmission was nice and still had the original clutch when I sold it. The turning radius was the best in any car I've owned. The 2 door Vitara JLX 2 piece soft-top was a welcome bonus in the summer and was easy to use. I enjoyed this vehicle very much over the decade I had it and still think about it. The only reason I sold it was because of the size of it. The interior size was comparable to my old jeep Wrangler. I just needed something bigger.

All hail the great Zook!!

December 6, 2013
By Ferrel from Eastern New York
Owns this car

I have owned my 2001 Suzuki Vitara JLX convertible for over 10 years with NO problems. This has probably been the best vehicle I have ever owned. Dollar for dollar I don't think you can find a better valued 4x4. And it is a REAL 4x4 with high and low gearing. Not a car wanna be like the CRV's and Rav4's which are built on civic or corrolla frames. The Zook is built on a truck framed which is boxed and can take some real punishment. I have taken my vehicle off road in the P.A woods and on the east coast beaches of N.Y. with no problems. I have kept up with jeeps and gotten into places the big SUV's would not dare. It doesn't have the ground clearance of the Jeeps or the power, but I have never been stuck and have passed many AWD vehicles in the harsh winter snows of the east coast. It is not the most comfortable vehicle, but it has all the creature comforts I need. If you like luxury, then this is not the car for you, but if you want an honest reliable vehicle, you can't go wrong the the mighty ZOOK.

HAVE KEEP IT LONGER THAN ANY OTHER CAR

BOUGHT MY 2001 VITARA IN MARCH OF 2002 WITH 9K MILES ON IT, I LIVED IN MOVED TO DC AND IT MADE IT MUCH EASIER TO PARK, i BOUGHT IT BECAUSE IT WAS THE MOST AFFORDABLE CONVIRTABLE I COULD FIND AND LIKE THAT IT SITS HIGHER THAN A SEDAN. I REPLACED MY SOFT TOP WITH A REMOVABLE HARD TOP, LIVING IN THE CITY IS NO GREAT TO HAVE A BACK WINDOW U CAN UNZIP THE FRONT PIECE OF THE HARD TOP IS EASY TO REMOVE AND FITS IN THE BACK SEAT CONFORTABLY, FROM 1981 TO 2002 I HADE 11 DIFFERENT CARS AND 09 WERE NEW CARS -AND THE DEPRECIATION WAS KILLING ME, MY VITARA WAS A GREAT VALUE, SINCE I HAVE HAD IT FOR 10 YEARS NOW-AROUND 2006 I DID HAVE TO REPLACE SENSOR FOR ABOUT $500, BUT OTHER THAN THAT ALL GOOD- I AM THINKING ABOUT SHOPPING FOR A NEW CAR-BUTi STILL MIGHT KEEP THE VITARA AS WELL SINCED i AM SURE THAT IT IS WORTH MORE TO ME THAN AS A TRADE IN...

All model years for the Suzuki Vitara 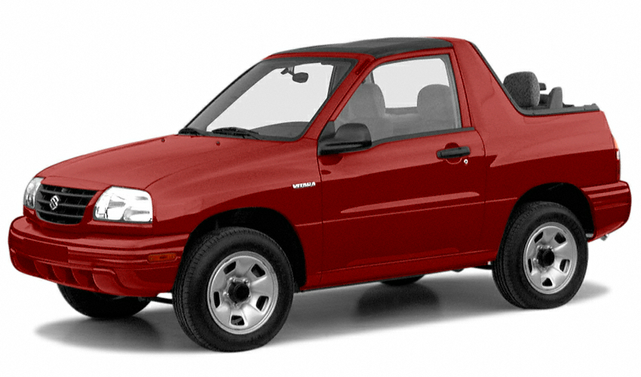 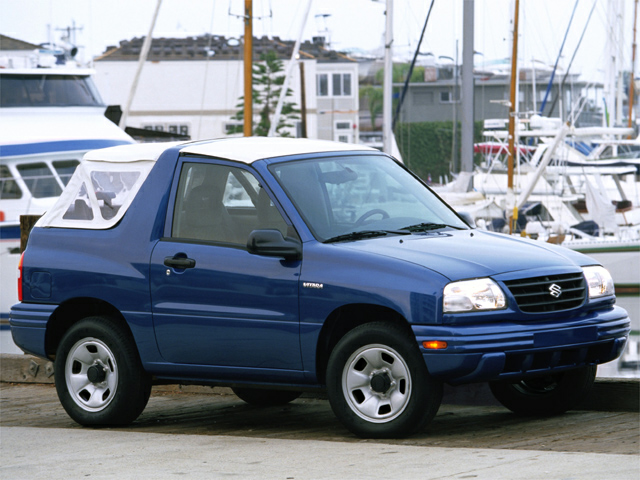