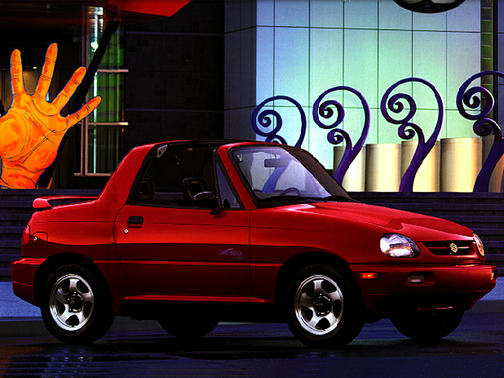 Our 1997 Suzuki X-90 trim comparison will help you decide.

The micro-mini two-seater that’s a mere 146 inches long was finished in “ultra blue metallic,” which looks purple in any light, making the SUV resemble a four-wheeled grape.

The X-90 has some nifty features for a tiny sport-ute, such as 4WD, dual air bags, available ABS and removable glass T-bar roof panels for open-air motoring.

ABS, however, is an $800 option that comes with cruise control as a companion feature. And unless you are a gnome or a troll, why would you remove the glass panels over your head and let others see who’s at the wheel of the Suzuki grape?

Room is at a premium, which means comfort is, too. And the 1.6-liter, 95-h.p., 4 is so fuel-efficient it runs for days on gas fumes, but it doesn’t run very fast or very quietly.

There’s been speculation that ’97 may be the last for X-90 because sales in the first three months of this year totaled 888 units, down from a paltry 1,172 a year earlier.

In a phone interview, Gary Anderson, vice president of sales and marketing, said no decision has been made on keeping or dropping the X-90.

Anderson said the X-90’s problem has been that Suzuki has done very little to promote it.

“The Sidekick is the engine that runs this train, so we haven’t focused much on the X-90 and that hasn’t helped it,” he said.

Anderson admits Sidekick’s age hasn’t helped, either, especially when RAV4 and CR-V have taken the market by storm.

“A few years ago Sidekick was in a niche market, and now with the added players, it’s become a member of a market segment, but a segment in which we need a new product with a new look. The public flocks to new styles and new ideas, as we’ve seen with the RAV4 and CR-V. Of course, it’s helped RAV4 and CR-V that both Toyota and Honda have such large owner bodies,” he said.

Anderson insists that RAV4 and CR-V aren’t members of the Sidekick SUV fraternity.

“They’re not SUVs, they’re CUVs–car-utility vehicles,” he said. “We’re capable of going off road, they aren’t.

“But RAV4 and CR-V can help Sidekick,” Anderson admits. “They’re expanding the market and attracting attention to the segment; it’s just that we need new product to get more of that attention attracted to us.”

Anderson said Chevy should help S uzuki again because a redesigned Tracker comes out with the restyled Sidekick, and Chevy will put heavy promotion behind Tracker that can only draw attention to Sidekick.

Of the ’99 Sidekick, Anderson would only say: “It will be a little roomier, a five-passenger (four now) model with a much different look and a dramatically more powerful engine. We’ll have a V-6.” It’s the first time Sidekick (and Tracker) will offer other than 4-cylinder power.

i searched an x-90 in very good condition and after 13 years, i found it. I live in Canada and the x-90 is what i needed. I will probably never sell it till i die.

Most coolest car I've ever owned.

December 23, 2019
By Dustin from Lewisville, TX
Used to own this car

This car is a perfect student driver car. Since my Suzuki X-90 was manual transmission I had to learn how to shift gears with a stick shifter. The people I purchased this car from took good care of that Suzuki X-90. It had over 123,000 miles on the odometer. The engine had no compression on one cylinder, so the car would drive too slow on the highway. The removable t-tops still had their covers attached, so you wouldn't bake from the sun. I drove this car for a year or so and then sold it, because there were a lot of oil leaks and a cylinder on the engine lost compression. However, I did drive this car from south Florida to Texas twice with no problem. Thanks.

January 16, 2019
By rogertc1 from davenport IA
Used to own this car

I am 6'1" fit just fine. However it was just a 2 seater purple/blue with a tiny trunk. Had to stop it to shift into or out of 4WD. Loved the T-tops. I had it till over 120,000 miles then moved on. It had developed a lot of rust on the underside. Was fun while I had it. Great visibility.

All model years for the Suzuki X-90 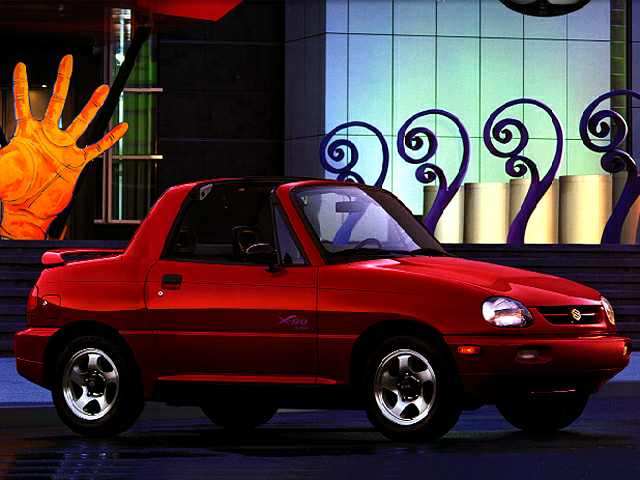 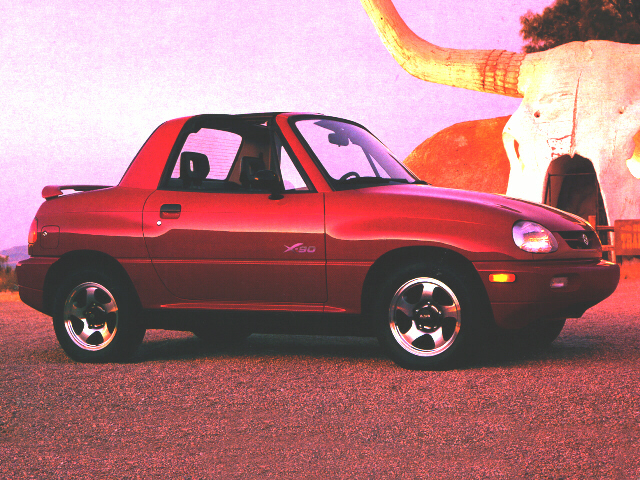 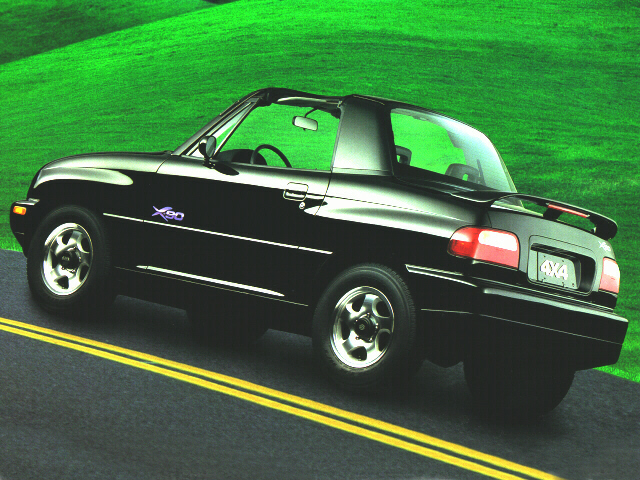 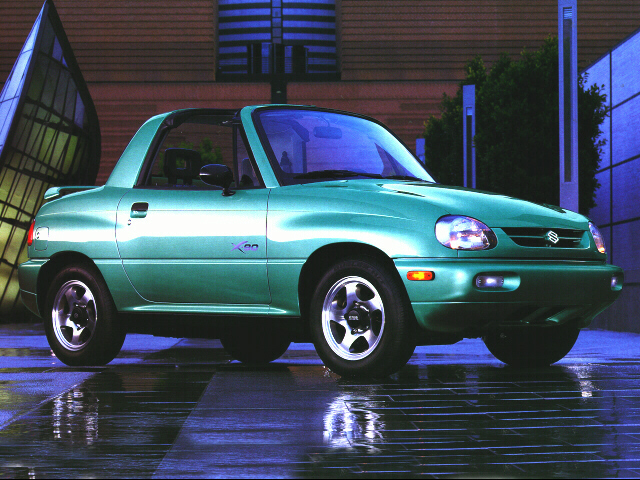 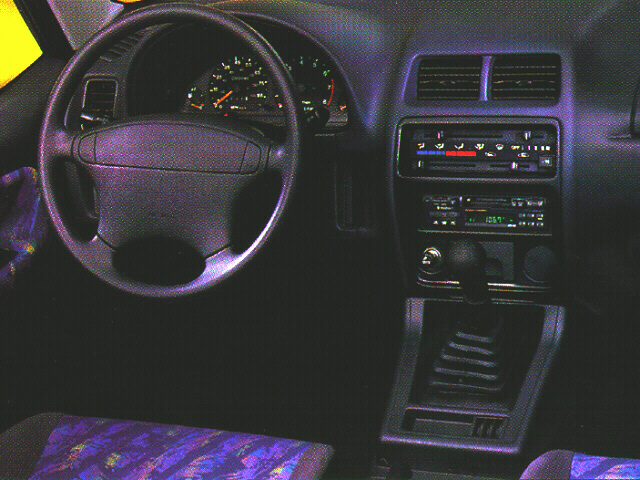 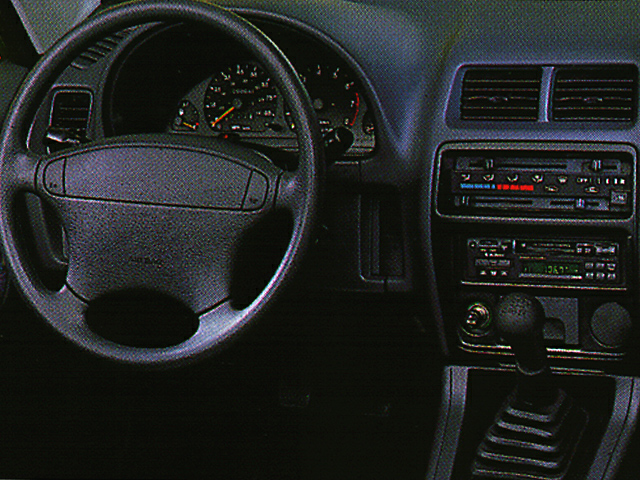