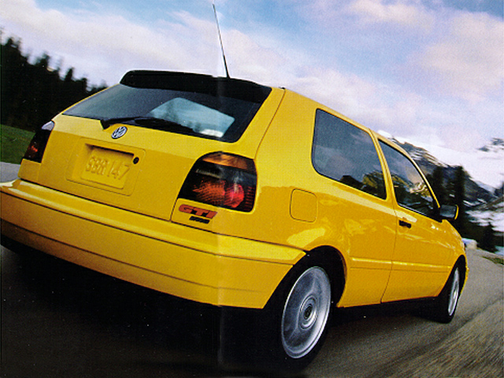 Our 1995 Volkswagen GTI trim comparison will help you decide.

Five years ago Volkswagen tried to crack the sports car market with the ill-fated Corrado.

There was nothing wrong with the way the Corrado was built or how it looked or performed. The car was aces in most respects. It was the Corrado’s $25,000 (and up) price tag that scared off many potential suitors.

VW officials found out the hard way that few buyers are willing to spend that much on a Volkswagen – no matter how good a car it is.

Instead of abandoning the high-performance market, VW withdrew after 1993 and retooled.

The result is the 1995 Golf GTI VR6, a car that performs every bit as well as the old Corrado, but it’s more practical, just as well-equipped and, most importantly, about $5,000 cheaper.

The GTI is based on the entry-level Golf hatchback. However, it has a bigger engine, better suspension, minor trim changes and a sportier interior – and it comes fully loaded with luxury items such as a sunroof and heated seats.

In other words, the GTI delivers the solid punch of the Corrado without knocking out buyers on a tight budget who are looking for a versatile hatchback. It’s a winning formula for these value-conscious times.

The GTI is powered by VW’s delightfully spunky VR6 engine and five-speed manual transmission, basically the same setup VW used in the last versions of the Corrado. The engine delivers 0-to-60 mph acceleration in the seven-second range; top speed is 130 mph.

Those sterling performance figures should be good enough to satisfy the needs of most sporting drivers. The GTI can run with such notable performers as the Ford Probe GT, also outfitted with a six-cylinder; the Toyota MR2, and the turbocharged Mitsubishi Eclipse and Eagle Talon.

Unlike those sporty-looking vehicles, the VW has a squared-off and more formal appearance. If that is a bit of a turnoff for you, chances are you’ll overlook the GTI’s less-than-exciting styling once you fire it up and experience the car’s marvelous engine.

VW engineers tuned the 2.8-liter, 172-horsepower V-6 so that it delivers at least 85 percent of its power (engineers call it torque) between 2000 and 6000 rpm. That gives the engine an unusual amount of strength.

For example, once or twice I inadvertently started out in the wrong gear (second or third), but the GTI proceeded with barely a strain. Revving the engine hard and shifting fast are two of the things that make driving the GTI such a blast.

The engine’s performance is amazingly linear. It pulls hard in all rpm ranges; you can reach 65 mph in second gear. The shifter glides smoothly into each gear, and the clutch is easy to operate. VW does not offer the GTI with an automatic transmission.

You wouldn’t expect a rather dowdy-looking hatchback to be able to accelerate fast and carve up curves as well as the GT I. It turns out that that is part of the fun of driving it – no one else expects the car to perform this way, so you can catch plenty of Mustang and Camaro owners napping as you zip by.

The GTI’s power-assisted rack-and-pinion steering provides the driver with an excellent feel of the road. It’s a system that is not too light and not too heavy; when you turn the wheel response is quick and crisp.

That said, credit must be given to the GTI’s powerful four-wheel anti-lock disc brakes, which haul the car down from high speeds with absolute firmness and stability. The anti-lock system is standard equipment on the GTI.

The GTI is very quiet over the road. You don’t hear much from the ca ‘s somewhat firm four-wheel independent suspension system.

Our test car was built well. The doors closed with a very solid and sturdy thunk. Also, road noise is well-muffled, giving the car the solid feel of quality.

In fact, a freight charge of $390 was the only item on the window sticker that added to the car’s price.

Our test car sported a set of comfortable but firm cloth-covered bucket seats. The upholstery featured an eclectic array of colorful shapes that some of my passengers liked and others didn’t (the seats appealed to youthful passengers).

As far as I could tell in one week and 350 miles of driving, the GTI has only one shortcoming: The rear seats fold forward only about halfway.

Most people who buy a hatchback expect to be able to put a bicycle or a large package in the back. But big packages don’t fit well in the rear of the GTI. In fact, you can get a longer, though not taller, package in VW’s midsize Passat sedan, which has rear seats that fold forward.

In any case, rear passengers will find plenty of leg and foot room. Also, our test car was bolted together tightly. I heard no rattles or noises.

The glossy black paint job was particularly nice. It was as smooth as wet glass.

You might think $19,000 and change is a lot of money for a hatchback. However, when you compare the performance and equipment on the GTI with what you get on competitive cars, you’ll see that VW has created a viable and family friendly high-performance car.

Truett’s tip: VW’s new GTI is fast, powerful, fun to drive and built well. Think of it as a five-passenger sports car.

Whether you want a little hot hatch, or a get around car that gets decent MPG the GTI Vr6 is a great candidate. I've been driving mine for two years so far, maintenance isn't hard, parts are reasonable, and the effort is rewarded every time you hop in and take it for a cruise. It is a blast to drive and really lets out a nice tone when you stomp on it. I wouldn't hesitate to buy another one, or do whatever it takes to keep this thing running till I'm good and ready for a newer model! Fantastic car. Now for the few draw backs- Cup holders are difficult to use. Needs another gear, cruises a bit high for my liking. Interior is a little bland, but not THAT bad. The hatch loves to collect dirt and dust. Hard to find one that someone didn't "Modify"

The German car you want to hate, but you love it!

June 3, 2009
By PauLMaiSTeR from North Hills
Owns this car

I bought my gti vr6 used with 219k on it in really bad shape, it had no tranny fluid, no motor oil, old rotten spark plugs & wires, a muddy air filter, the only good thing was that it had some water & gas. i drove the car up to 5k after it started giving me issues, at first i thought the engine was dying on me but it was an annoying electric problem, this is my major concerne with this car, worst electrical system ever! that annoying check engine sign would come out every time, the alarm system is annoying, you lock the car & the alarm goes on, i would have to disconnect the battery for an hour for the whole electrical system to reset, also the power windows are the worst, the best thing you can do is swap them to manual & it will be sweet. just recently did a tune up & its running like if i pulled it out from the dealer, its running really smooth, also the stock suspension is not that great, feels like if the hot wheel was to flip in sharp turns, best thing is getting a lowering kit sport suspension, overall, confort is excellent for a 2dr hatchback & its also a really safe passanger car, handling, couldnt be better for a fwd, exterior design is nice & sporty, interior is ok, has plenty of cup holders except that it doesnt have a glove compartment which is really randomly dumb, features are basic, price, excellent performance car for the buck, & reliabity, you will never have engine problems with the vr6, its a really strong engine that can last forever, just give it its daily maintenance & you wont have any headaches, but if you dont you will have nightmares, those are all the consequences & the qualities of this babe

This is a great car, it's a blast to drive and I could not ask for more for being a stock car. As for the other review about the back seats mine fold down all the way. I have had 5 bike in the back of mine. Well anyways it's a great car. So check it out. 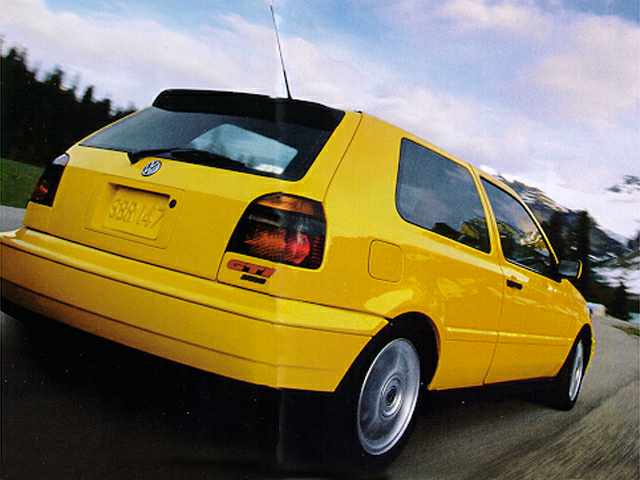