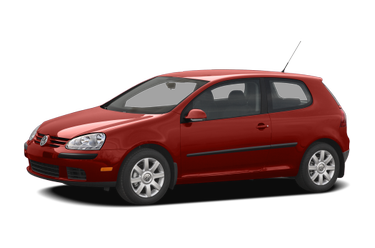 Suprisingly, people more often mistake my new two-door 2006 VW Rabbit for a GTI than a Golf. But, that doesn't bother me. There are too many features in the new Rabbit to list them all here. But I wanted to point out some items to put the car into perspective. I got my Rabbit to replace a 1-year young PT Cruiser, but I was also considering a Mini Cooper. I thought I'd add in comments on those two cars in case you're considering all three as a next car purchase. The ride is much stiffer than a PT Cruiser, but not has jarring as a Mini Cooper. And with its 2.5 liter engine & 6-speed automatic transmission, it's quicker than both of them. (Likely not quicker than a Mini Cooper S, but definitely quicker than a PT Cruiser GT.) The 6-speed automatic works flawlessly, and does have the familiar shift-shock; unlike the Mini Cooper with its slippery CVT. But the Tiptronic aspect isn't just pure fun. Going to pass or heading up a hill: being able to fully control shifting is a wonderful thing. The seats hold you firmly in place, but are very comfortable. The telescoping/tilting steering wheel is a nice touch. The layout of the A/C vents is logical, even thoughtful. And, there's plenty of head, elbow and foot room (I'm 5'10") in the Rabbit, a trait it shares with the PT Cruiser, but is very unlike the confining Mini Cooper. However... the seat belts for the front seats in the Rabbit are pains to get at, demanding some strenous contortions. And I've found that when I look over my left shoulder before a lane change, I look straight at the door pillar. (A difficulty my 5'5" wife doesn't share.) But those cons aside, you get a lot of [little] car for the money with the Rabbit. The only "extra" I paid for was the Tiptronic transmission. The 8 airbags, 4-wheel anti-lock disc brakes, anti-wheel slip programming, 150 horsepower & 170 ft/lbs of torque, sports car handling, and daring good looks were all standard. I'll let you do the price comparison against a similarly equipped PT Cruiser and Mini Cooper. All in all, I'm completely happy with my purchase of the 2006 Rabbit. I only wish VW had brought the Rabbit back sooner!

July 5, 2006
By Spyyder from Maryland
Owns this car

Test drove the 4 door model and compared it to the Mazda 3. Night and day difference. I would like to see the 2dr in shadow blue

I was the first person in my area to buy one of these. Very high quality vehicle, good performance and economy so far. Standard safety equipment and other features can't be beat by any other manufacturer in the price class. Driving position is a little low and tough to find the just right position. 6 speed auto with Tiptronic is not as good as the DSG in the GTI; sometimes it will shift while you are shifting and will cause a double shift in manual mode, pretty annoying. Still great acceleration and handling with a comfortable ride. Great economy car with many suprising, up level qualities.