Looks like: Chevy took the gloves off for a more dramatic shape that’s sharp-edged and Lexus-like, but with a big grille and unusual, low-set headlights similar to the redesigned 2019 Hyundai Santa Fe

Another badge from the distant past comes back in the form of Chevrolet’s new 2019 Blazer, reviving a Chevrolet SUV staple that ran from the 1983 S10 Blazer through the nameplate’s demise in 2005 (and that’s to say nothing of the big K5 Blazer of even earlier heritage). But this in no retro-looking ride — it’s a break from the recent past in Chevy designs, with more “hey, look at me” style.

The new Blazer also seems to aim more at the country club than the country. It’s no body-on-frame Ford Bronco fighter, another badge from yesteryear making a comeback soon with promised off-road chops. The Blazer is, rather, more of a Ford Edge or Nissan Murano fighter.

The Chevrolet Blazer will fit between the Equinox compact SUV and the big three-row Traverse in the Chevy lineup, but the Blazer is more stylish and interesting than either sibling to attract new buyers. The trim levels will include a sportier, aggressive RS model and a top-level Premier with luxury trimmings.

Might there be a GMC Jimmy Denali version down the road, aimed at higher-end competitions from more premium brands? Chevrolet and GMC are both brands under GM, so we wouldn’t bet against it.

The new Blazer’s design is energetic and sharp-elbowed in a good way; it should play well with the mom or dad who wants to be the cool parent. Styling is definitely more of a swoopy suburban cruiser than a truck — and in the sportier RS trim level, the Blazer has the meanest-looking Chevy nose short of a Camaro, with squinting LED daytime running lights and a blacked-out grille so big it could make Lexus’ spindle blush.

A pinched-waist side also includes a character line that sweeps nicely from the front wheel up into the back pillar, though it leads to one of those “floating roof” illusions, a design trend I thought was finally over. A panoramic moonroof is available.

In an unusual design flourish, the headlights of the Chevrolet Blazer sit low in the bumper, separate from the high daytime running lights, and should present a distinctive look at night. Hyundai just did the same with the redone 2019 Santa Fe even as Jeep switched to more conventional headlight positioning for the 2019 Cherokee. The Blazer’s tail is not so dramatic (and less of a departure from other Chevy designs), but that also describes most SUVs. It features LED taillights and an integrated rear spoiler.

The five-seat interior features a horizontal sweep to the dashboard and a standard 8-inch touchscreen that stands away from, but not above, the dash. Chevrolet’s Infotainment 3 multimedia system also is standard, as is Apple Carplay and Android Auto smartphone integration plus 4G LTE Wi-Fi if you subscribe. Wireless charging and up to six USB ports are available.

For flexibility in managing people versus cargo room, the Blazer has an adjustable sliding rear seat. Maximum cargo capacity is 64.2 cubic feet with the second row folded. RS and Premier trim levels get a cargo management system with rails and a cargo fence. Another interesting detail: an electronic-locking glove box that can lock for security when the Blazer is in Valet mode.

Luxury options for the Chevrolet Blazer include a heated steering wheel and heated and ventilated front seats that can work automatically via remote start or the automatic climate control. Heated rear seats and a hands-free power liftgate also are available.

All models offer selectable driving modes, and there are two flavors of all-wheel drive available. The RS and Premier trim levels get a more sophisticated, higher-performance twin-clutch AWD system. The Blazer can two up to 4,500 pounds with the V-6 and offers a hitch-view camera feature that helps in aligning the hitch with the trailer.

Chevy says the Blazer has a “suite of available active safety features.” That isn’t very detailed, but we take it to mean that the Chevrolet Blazer continues GM’s pattern of reserving the best safety and driver assistance for higher trim levels and option packages. In another example, GM’s announcement notes that adaptive cruise control is “available” on the upper RS and Premier trim levels. A rearview-mirror video camera will also will be offered. 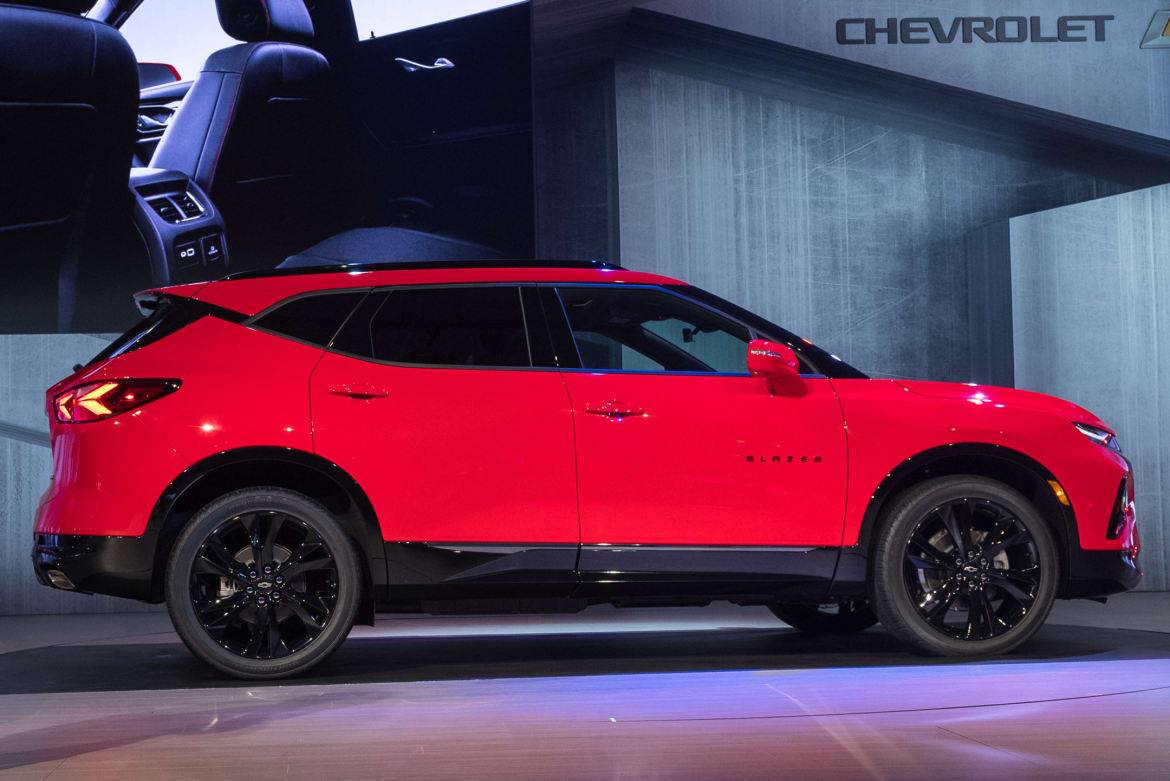 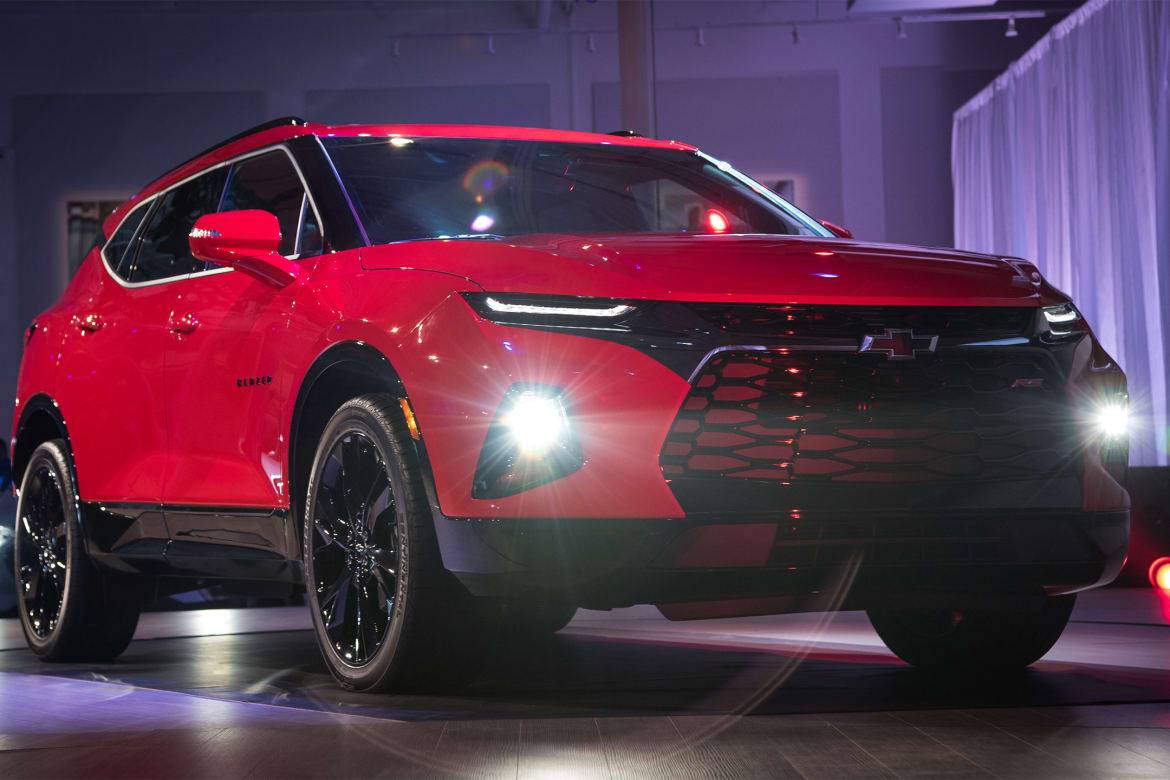 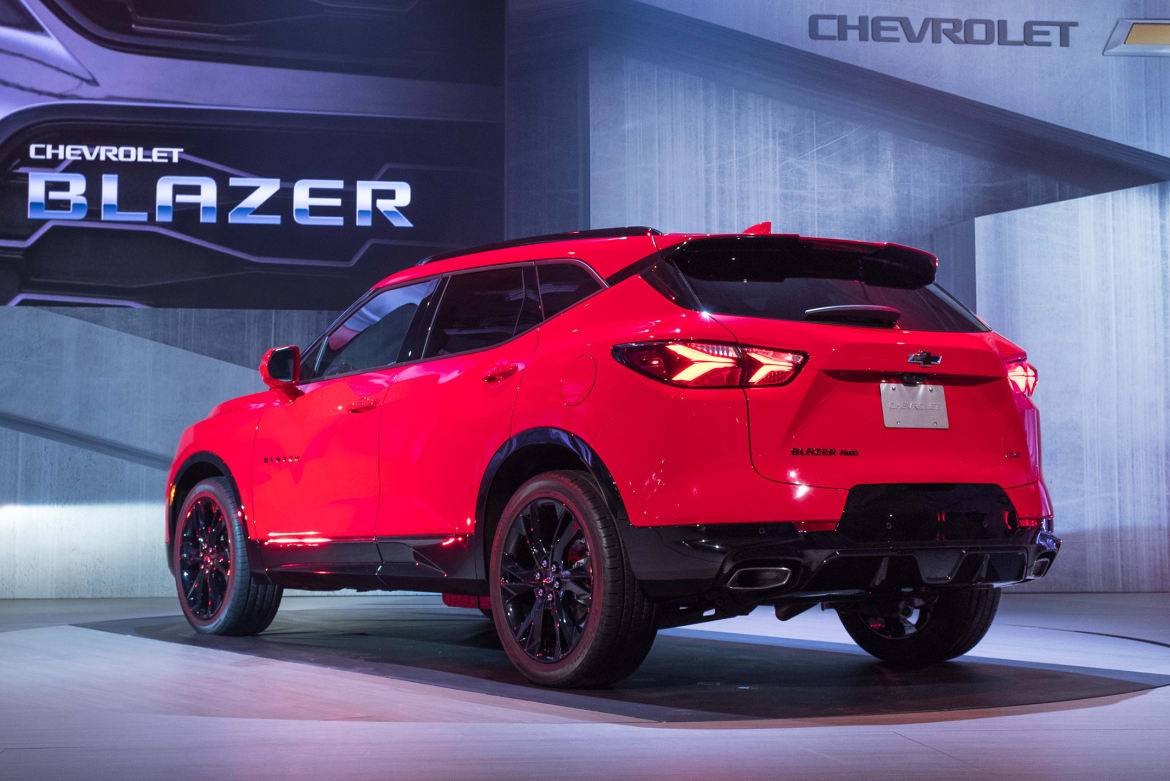 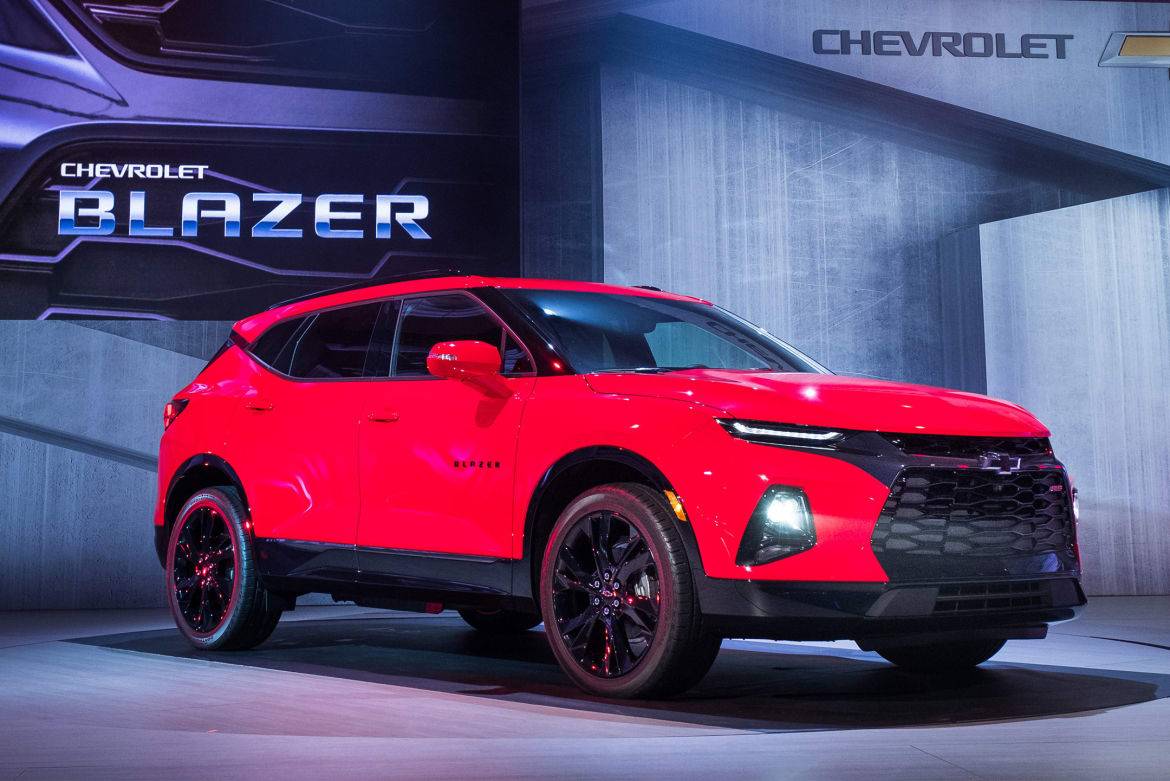 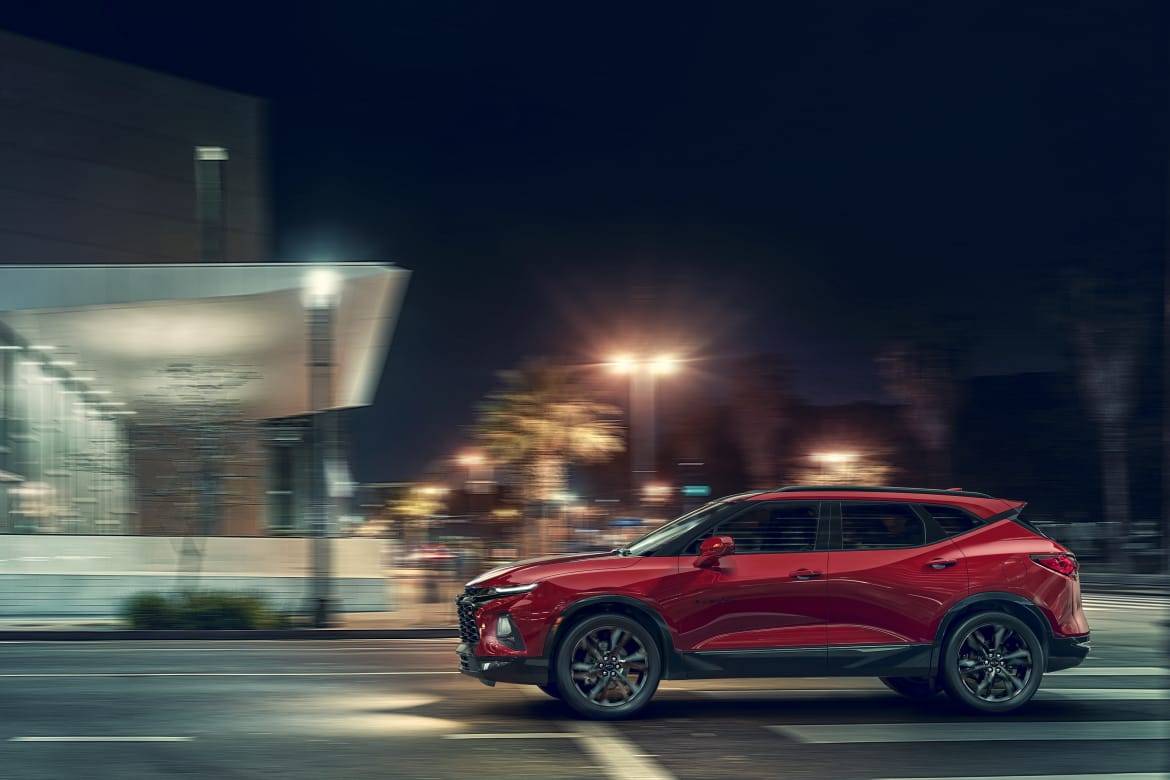 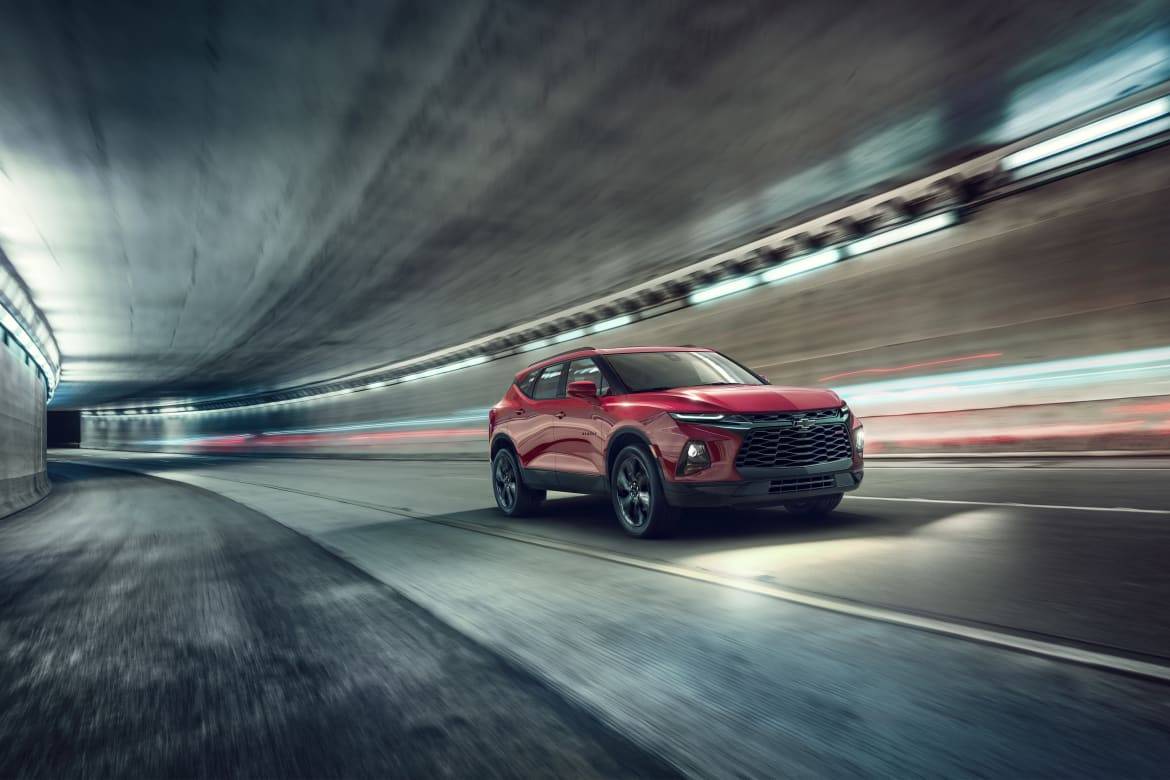 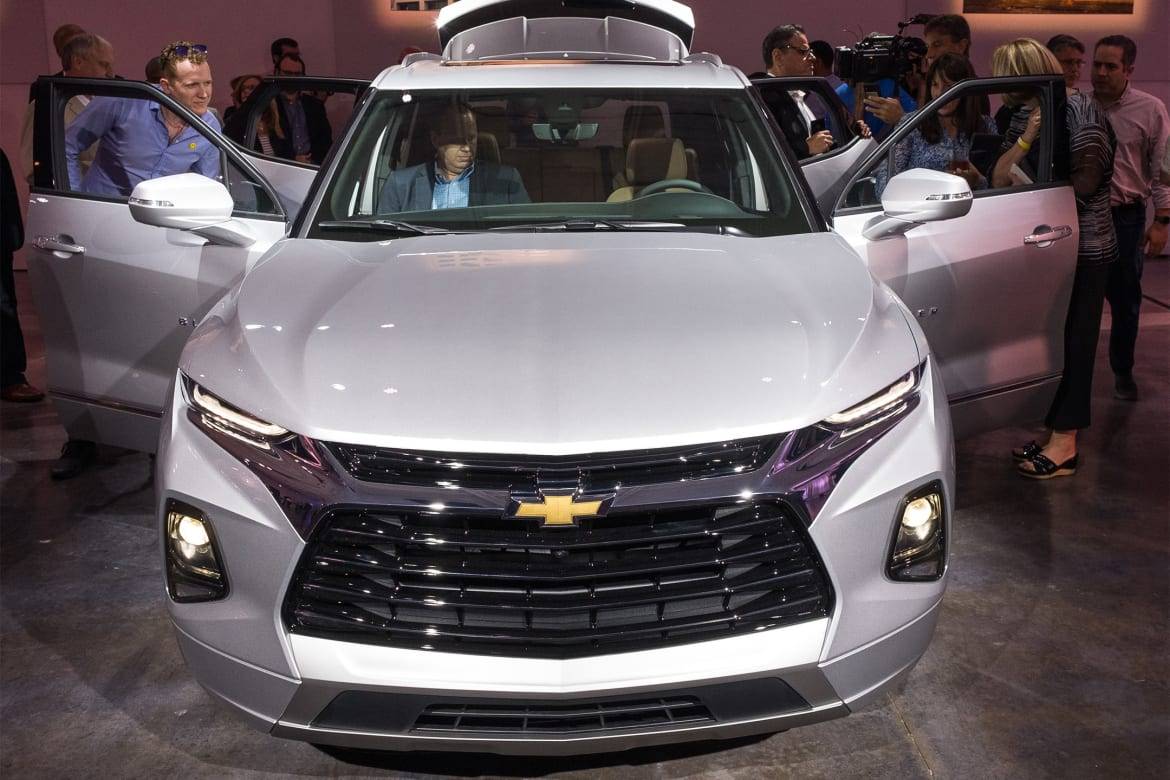 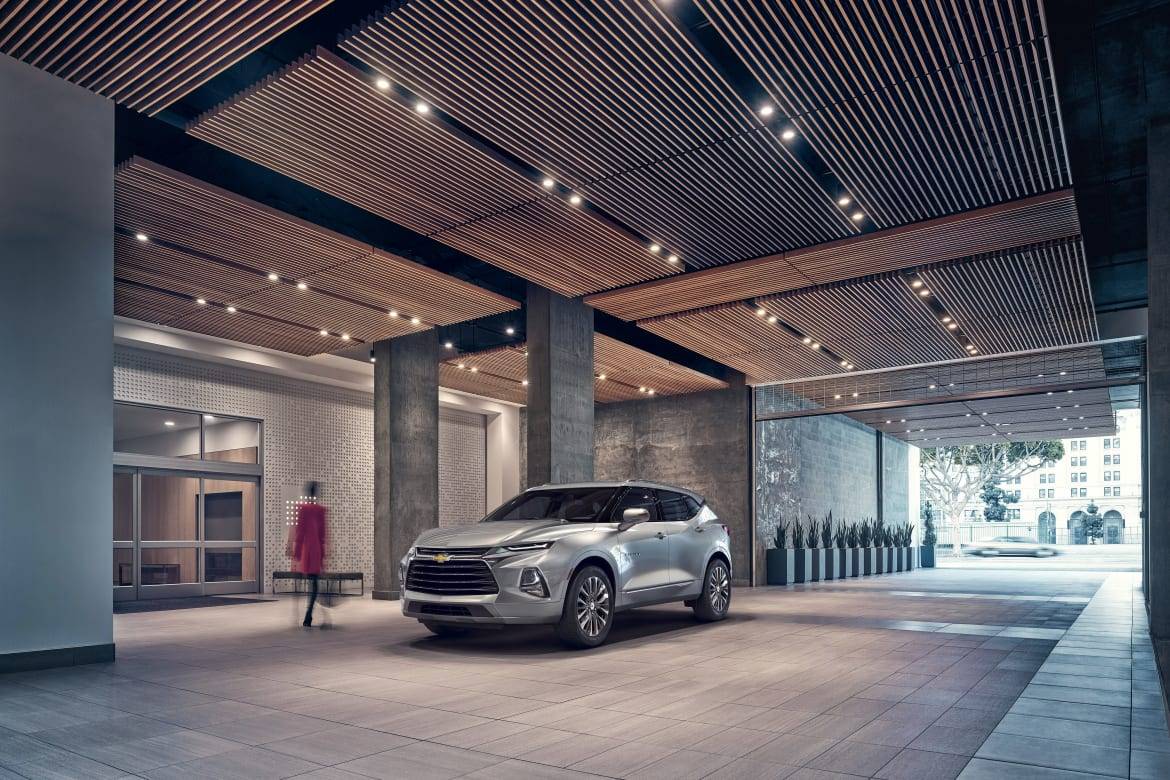 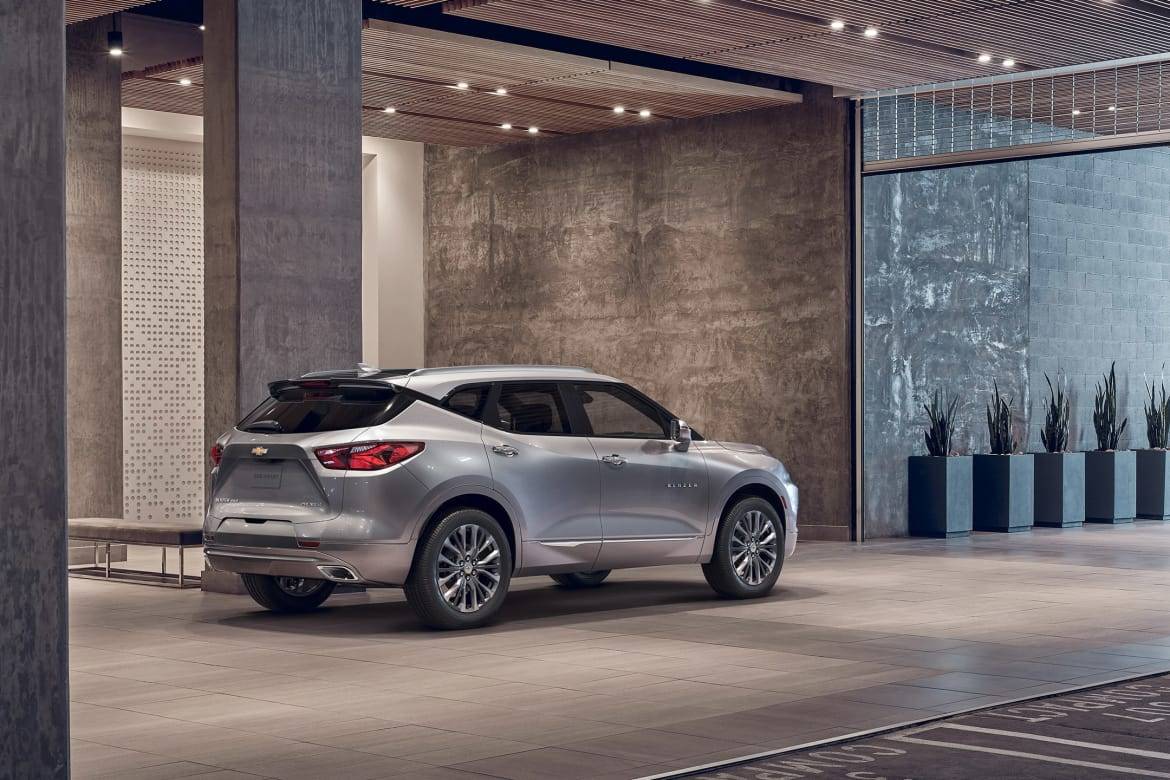 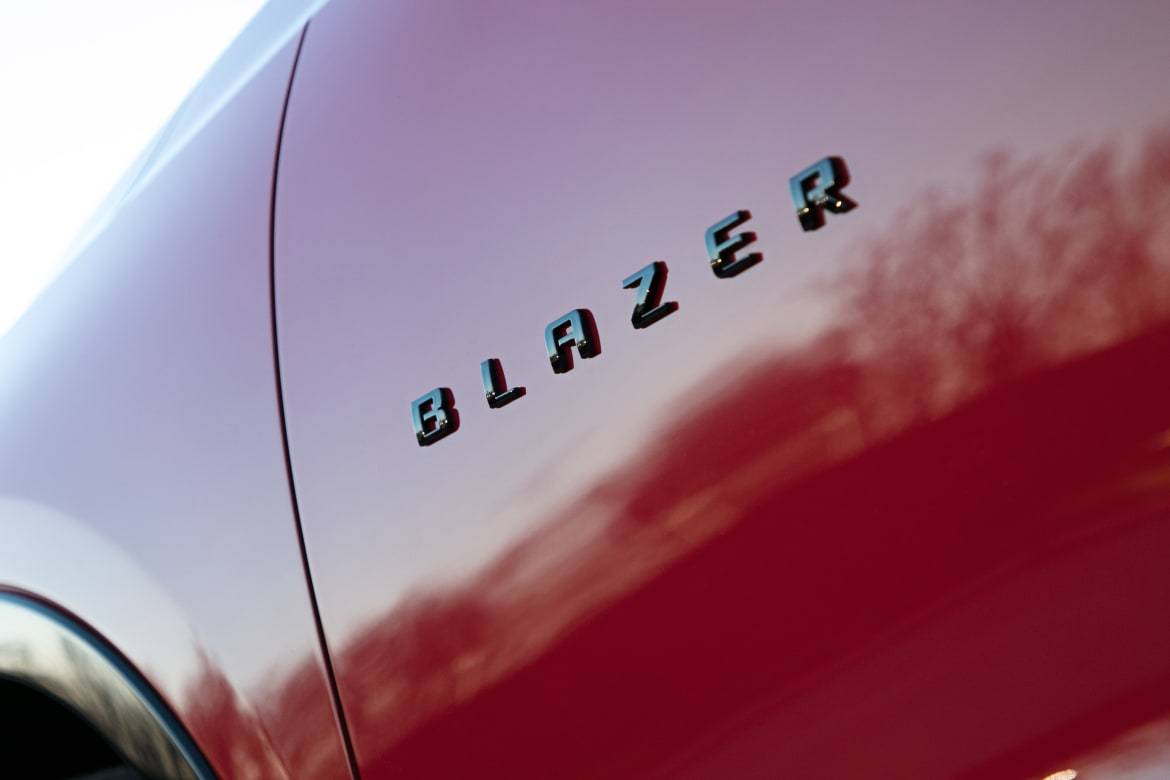 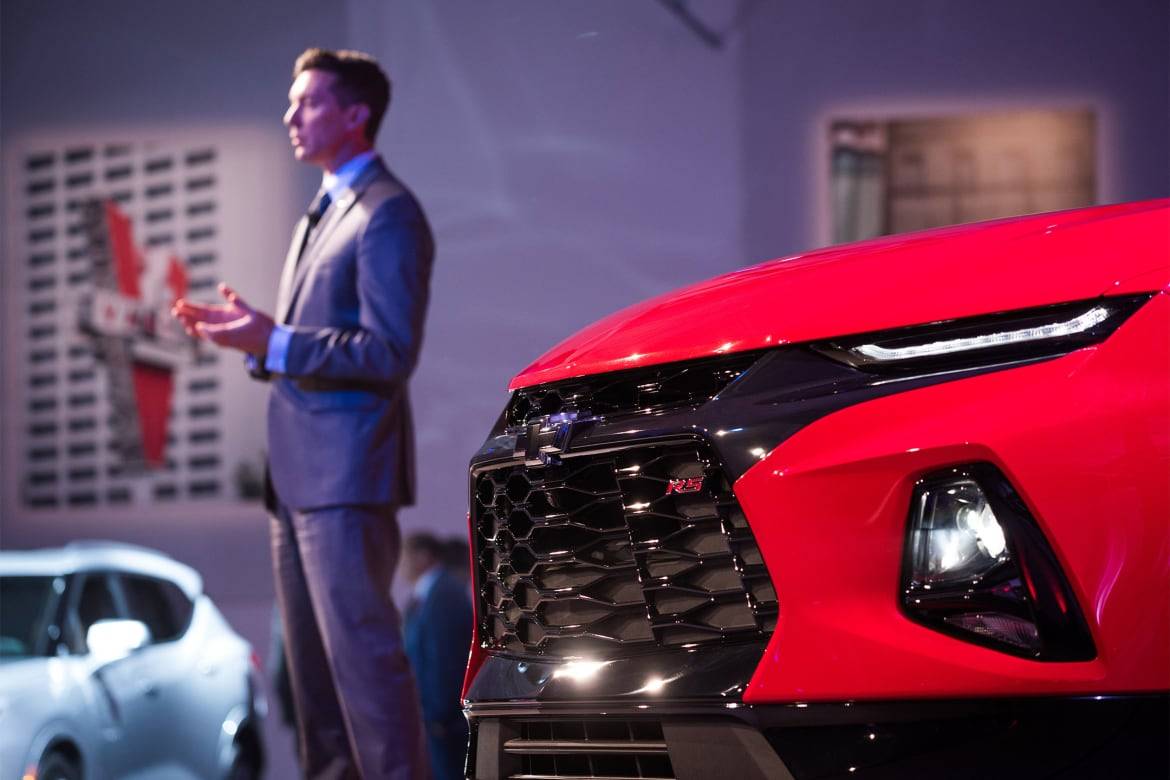 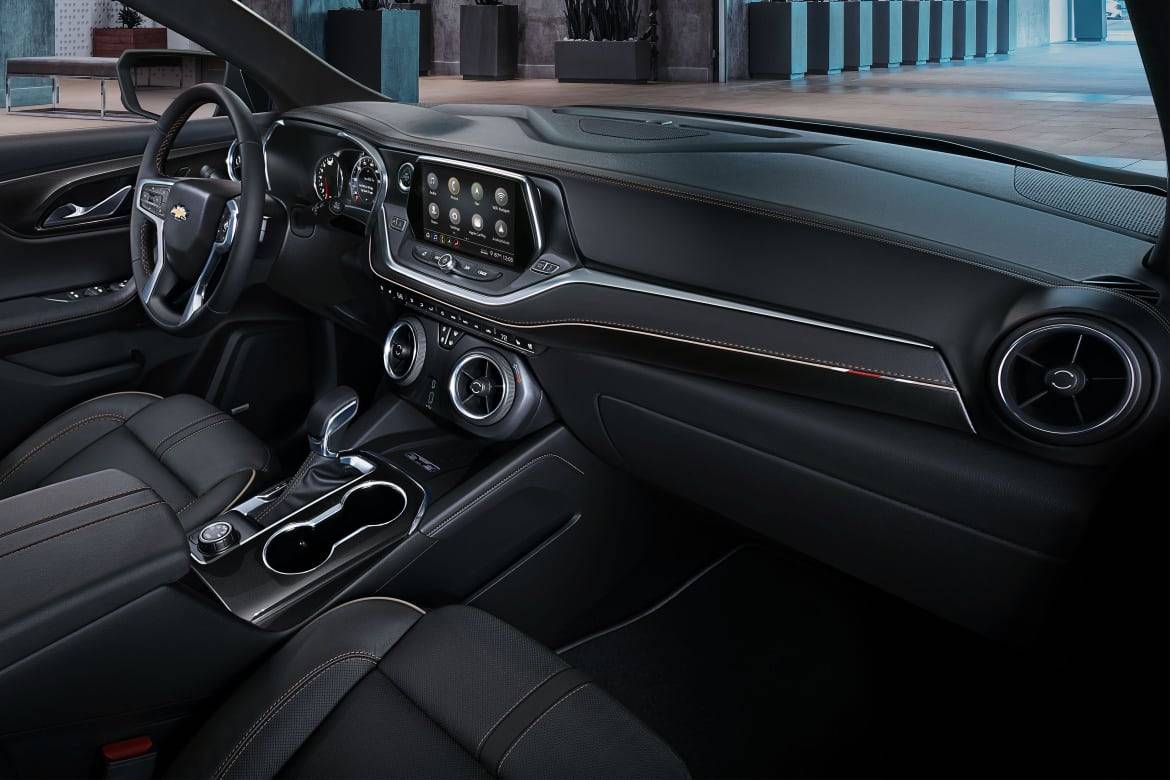 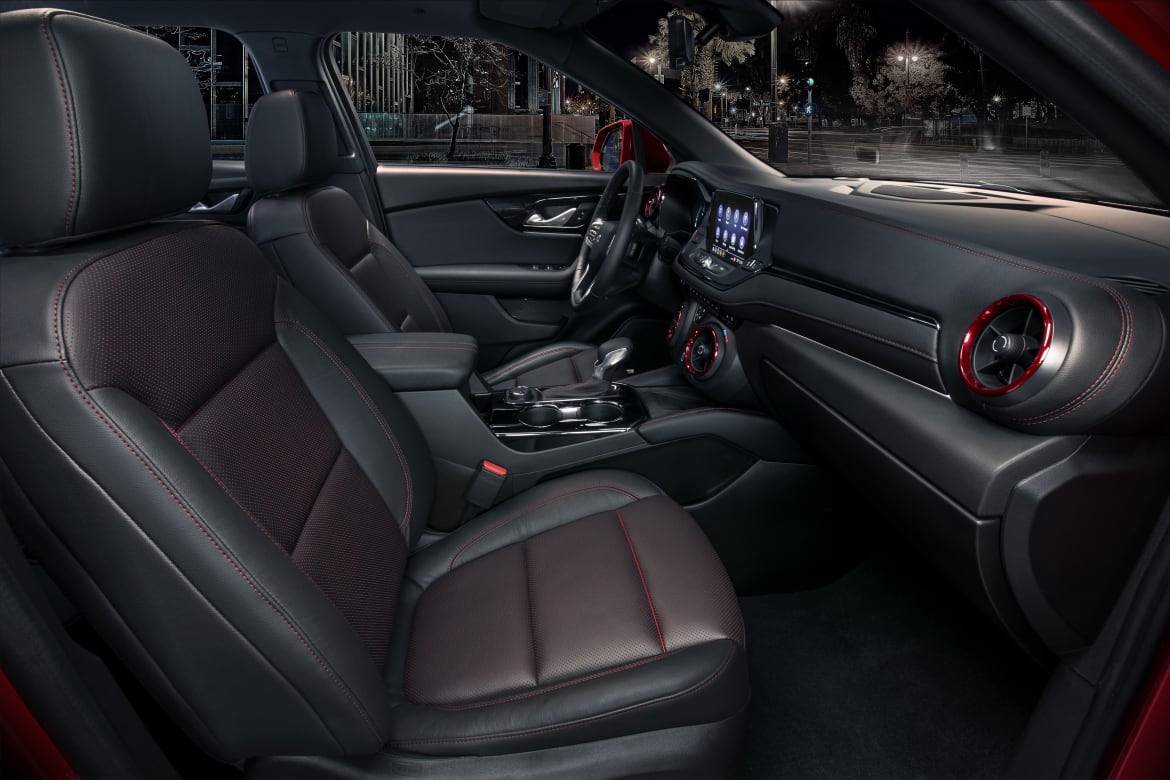 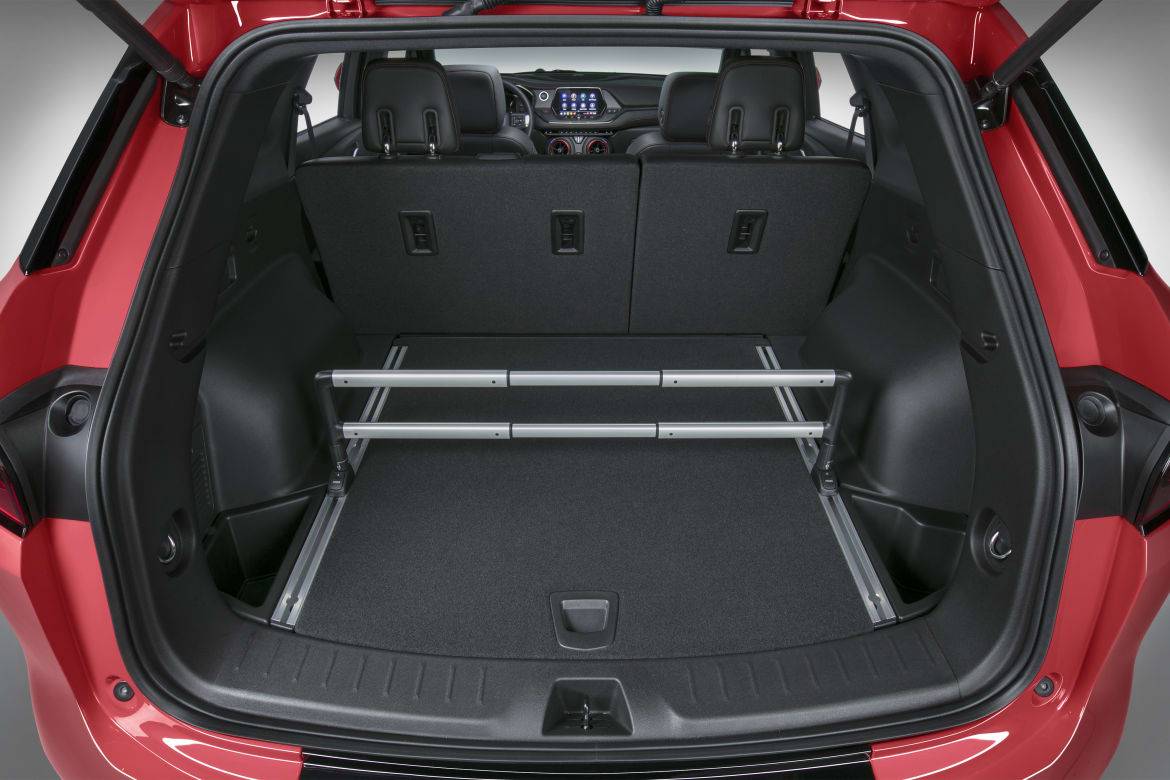 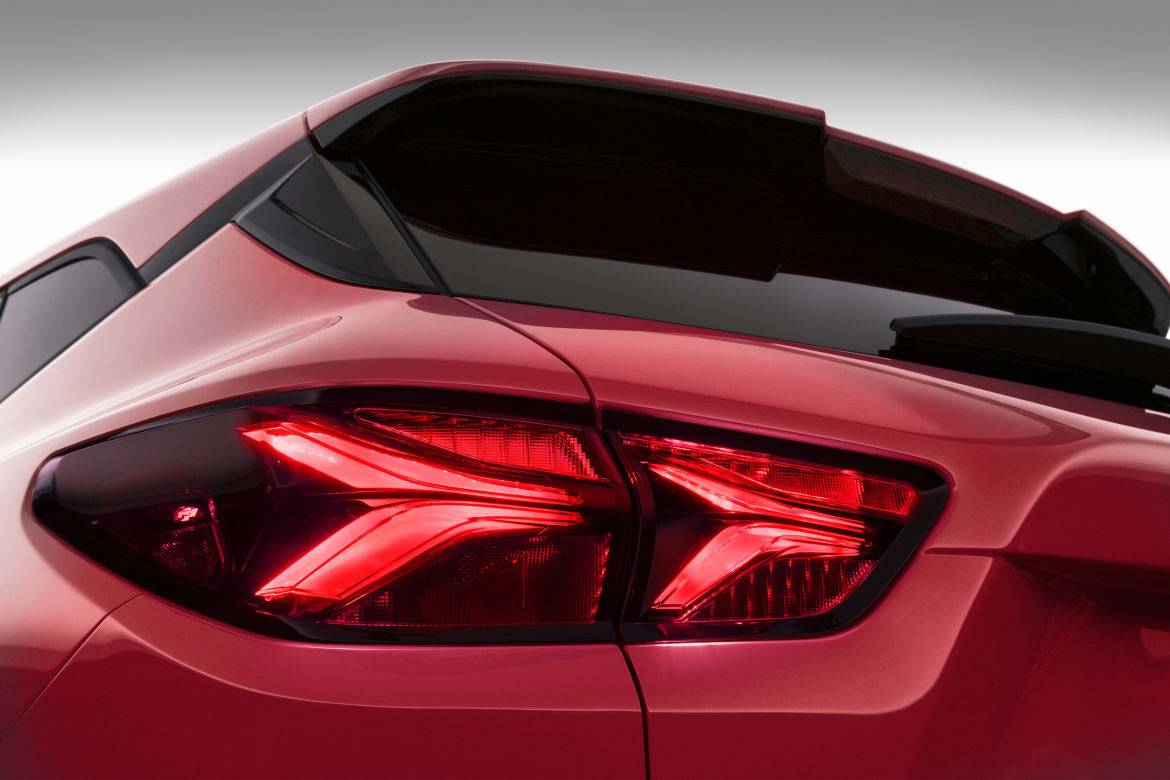