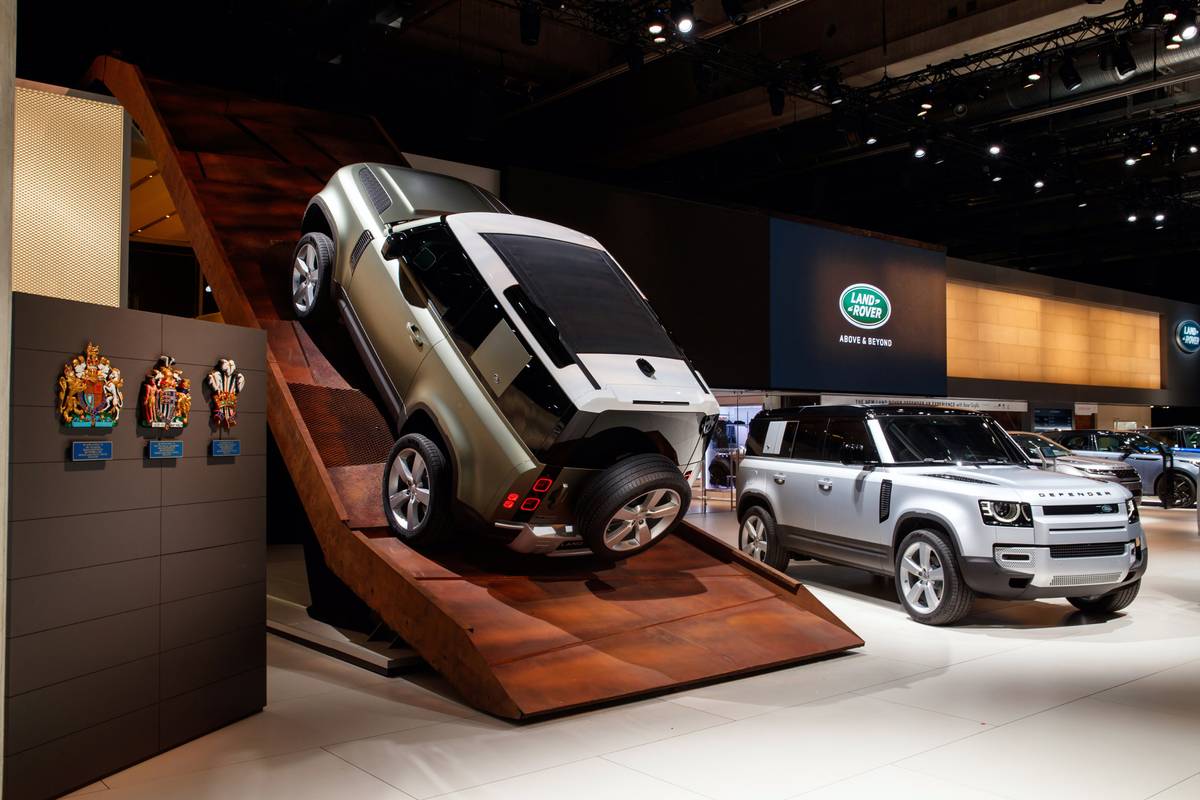 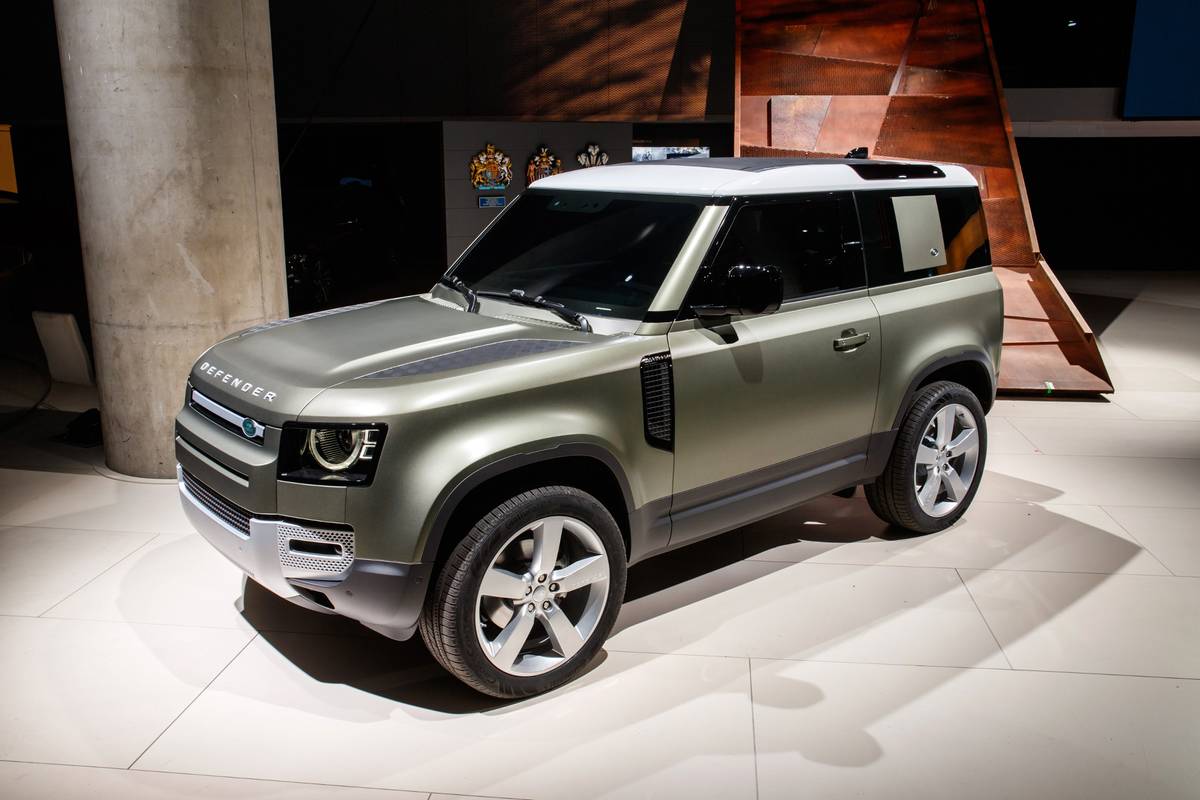 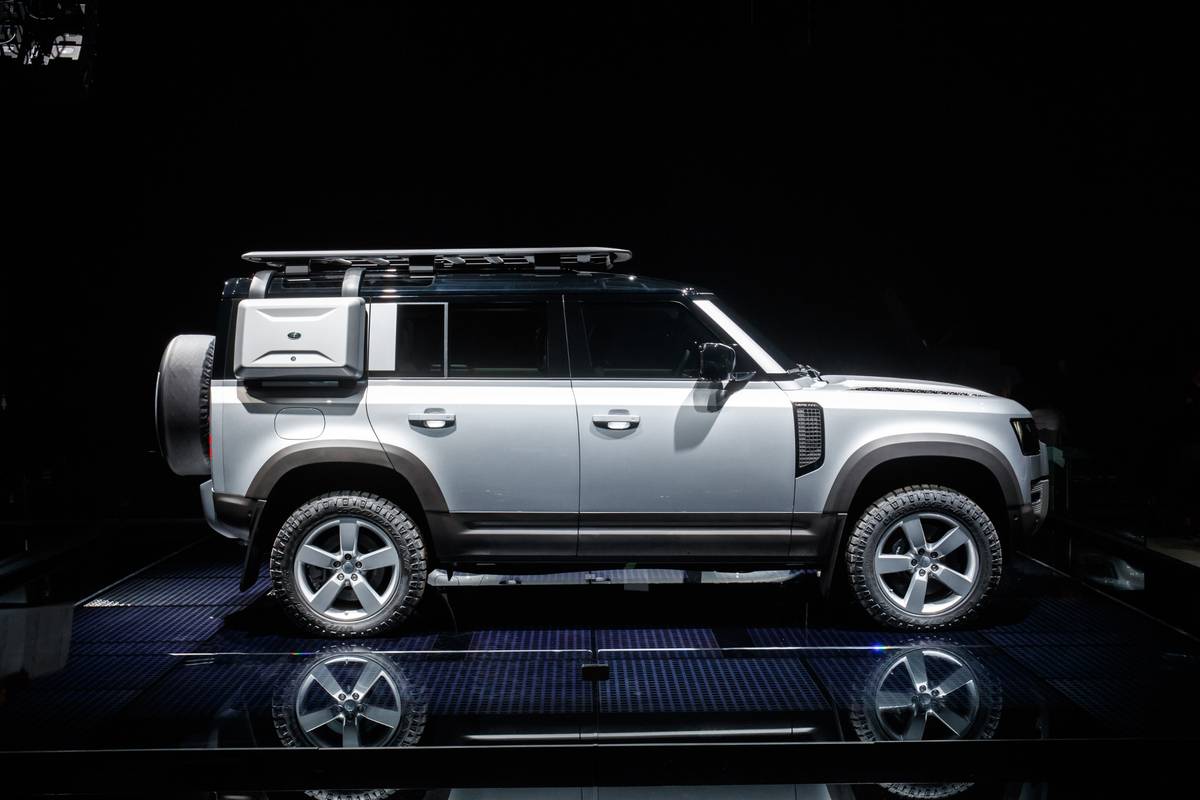 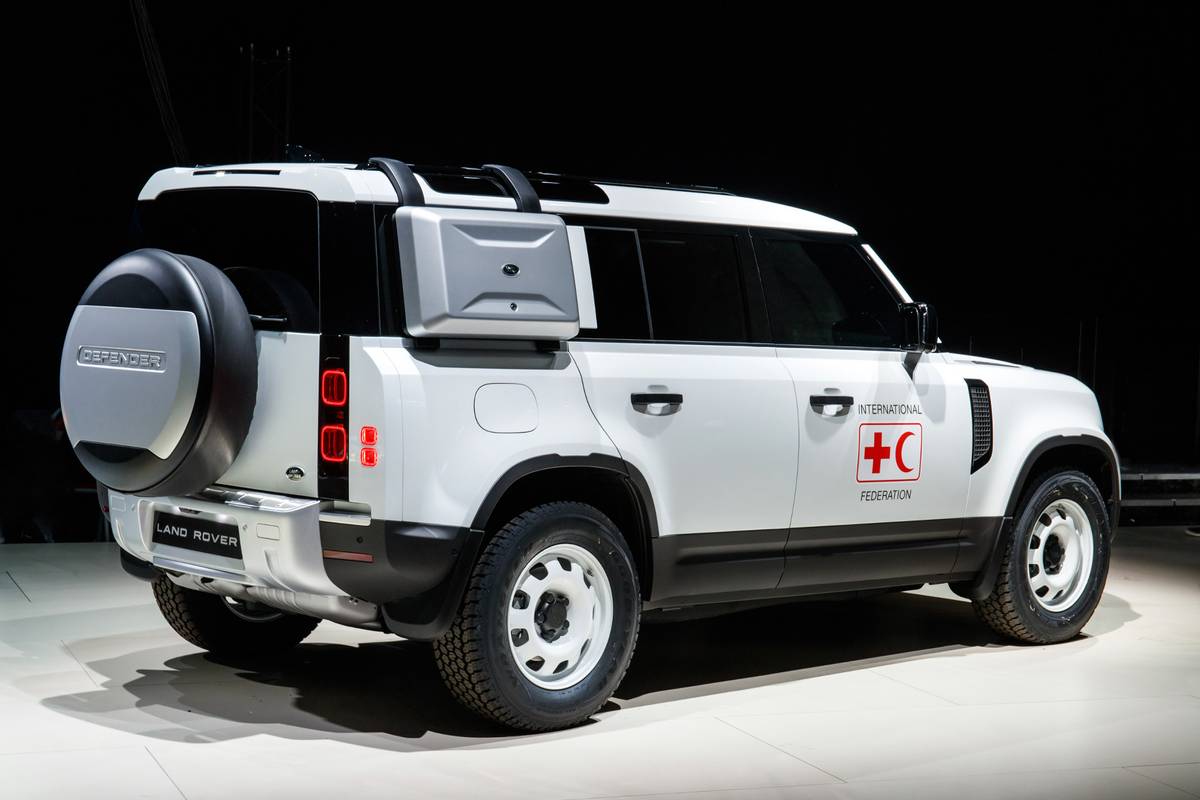 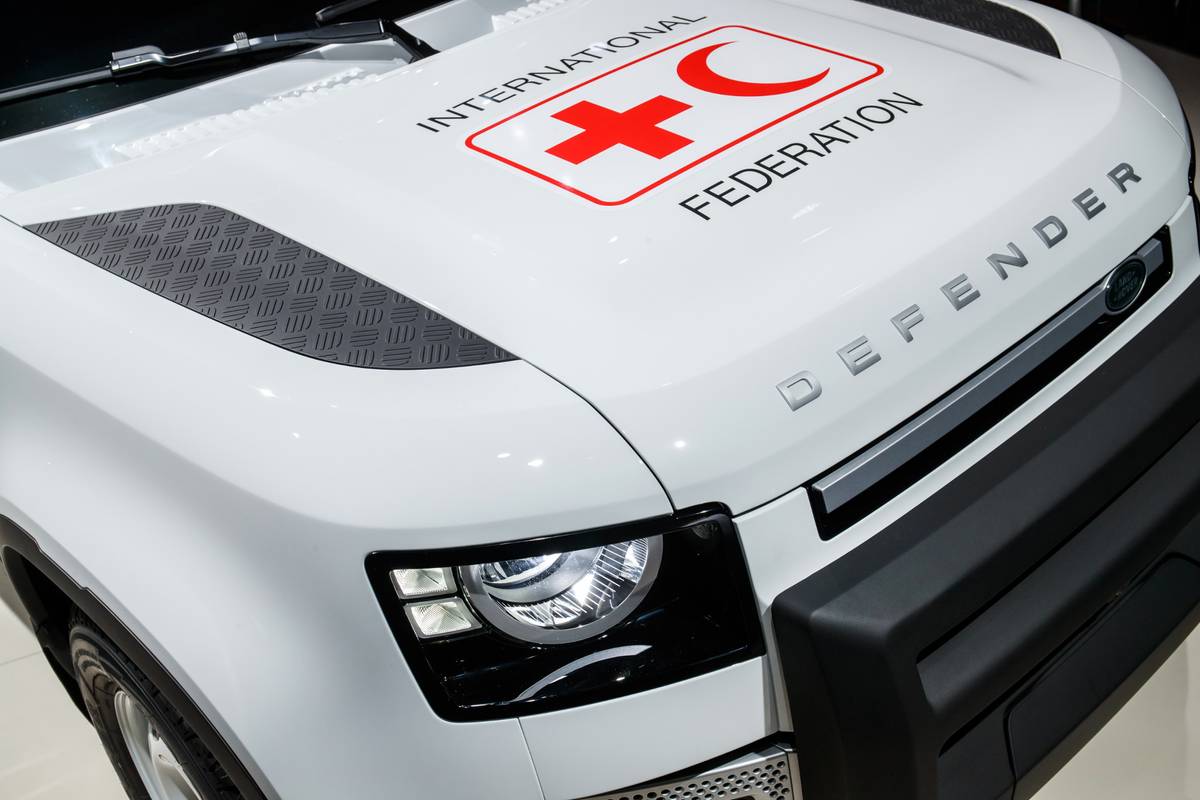 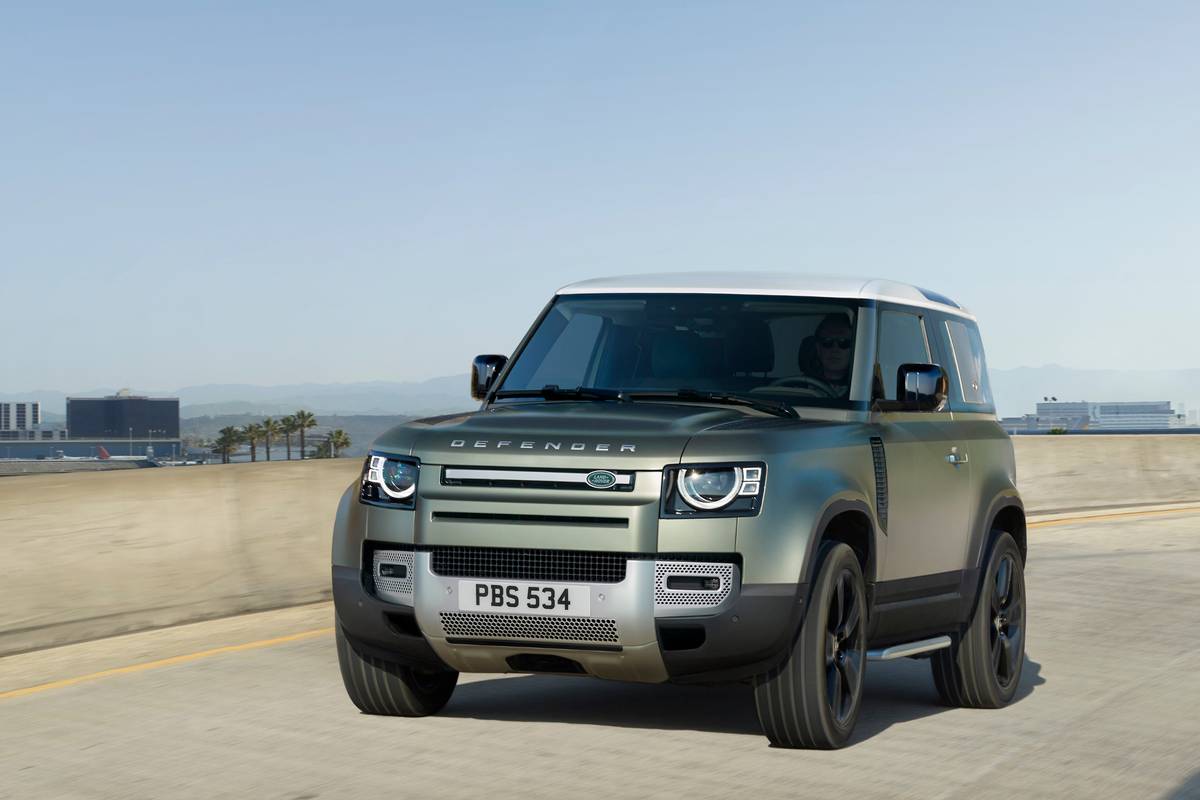 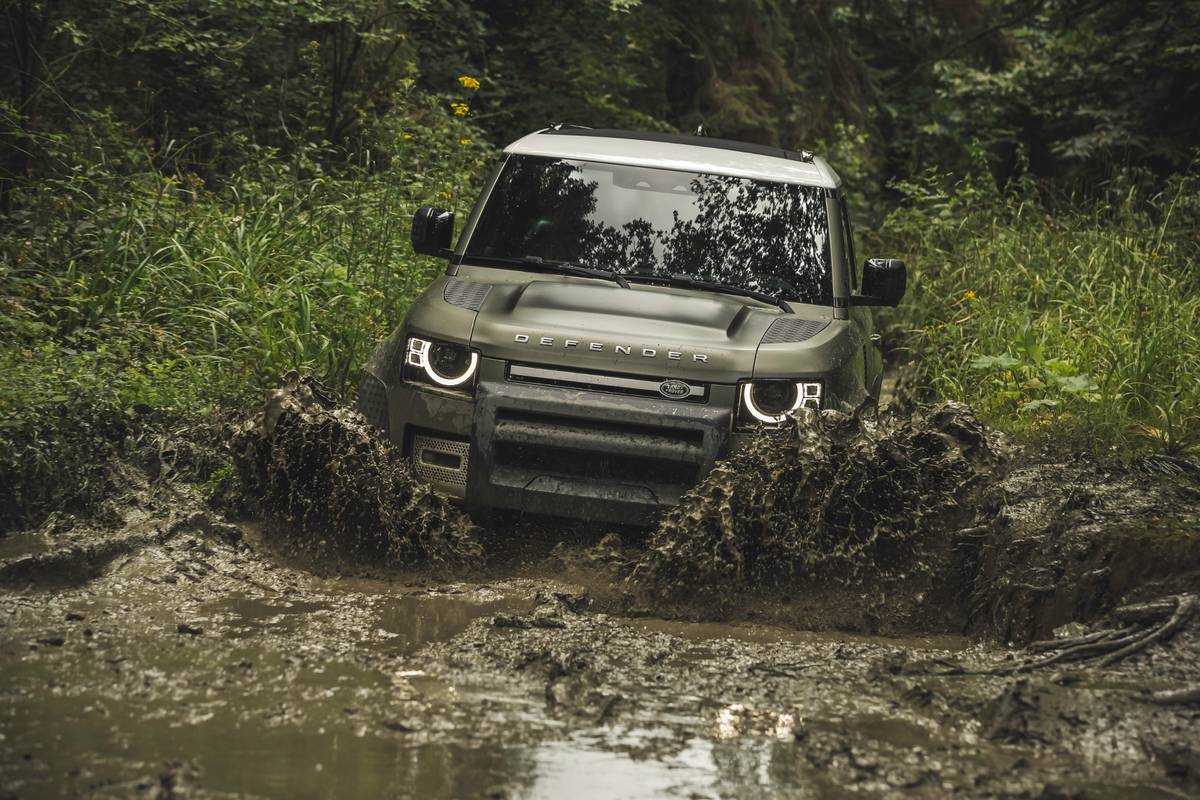 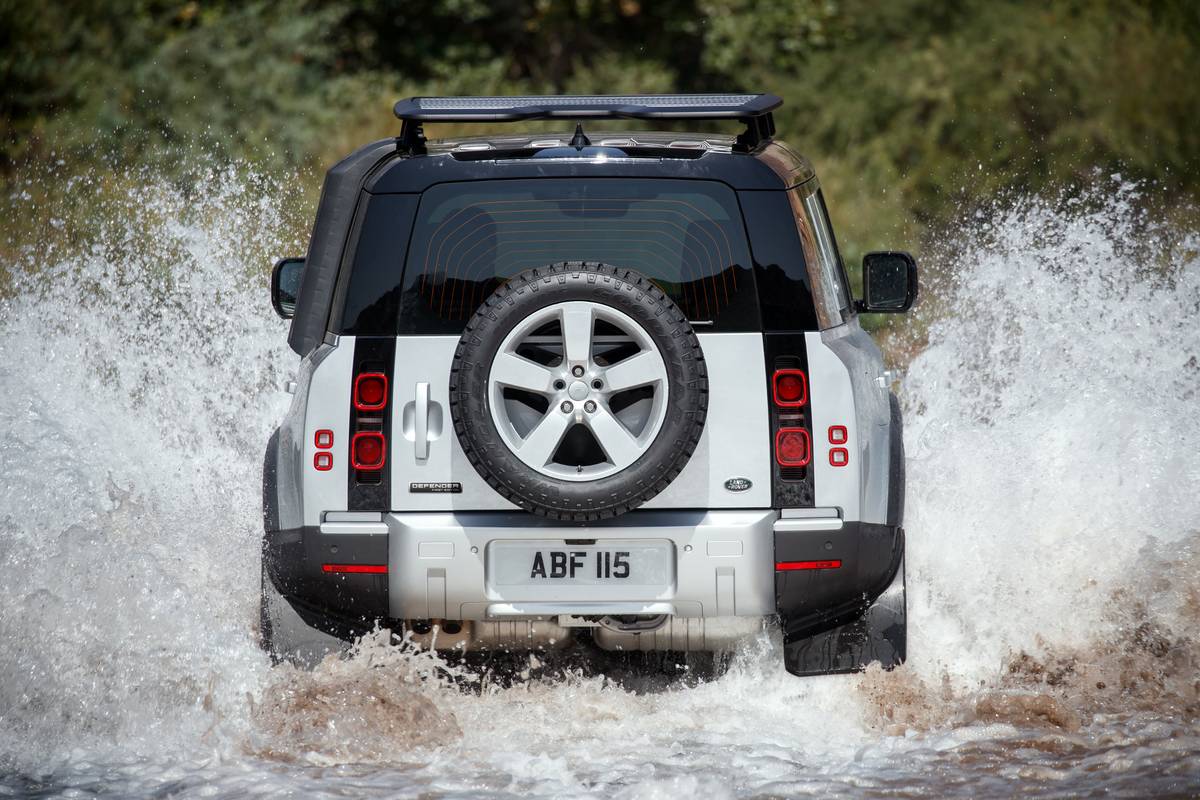 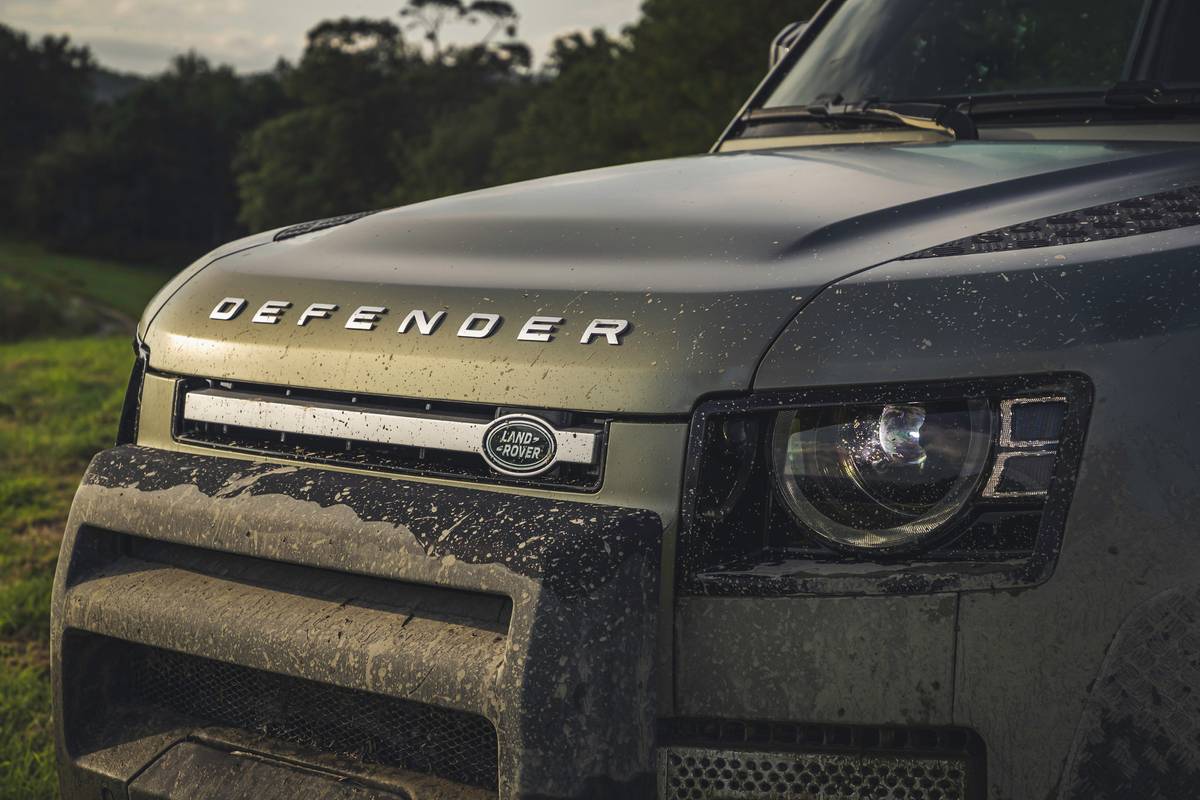 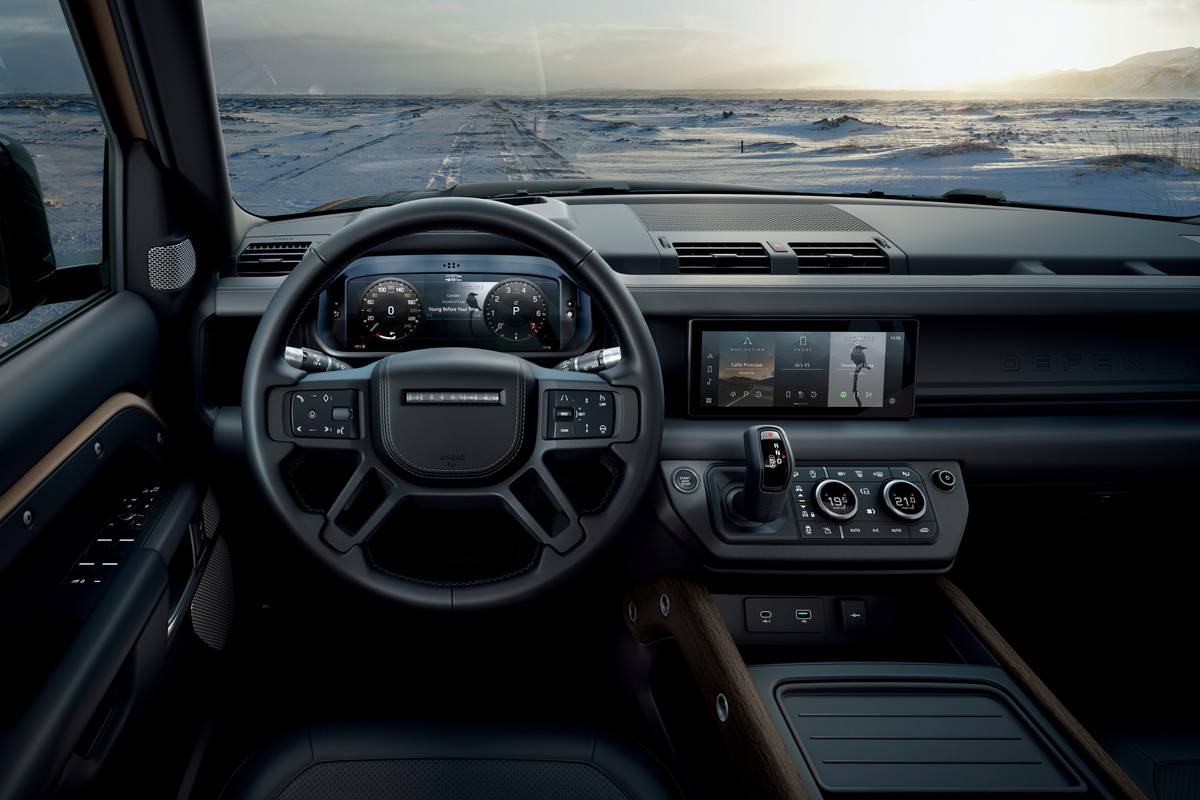 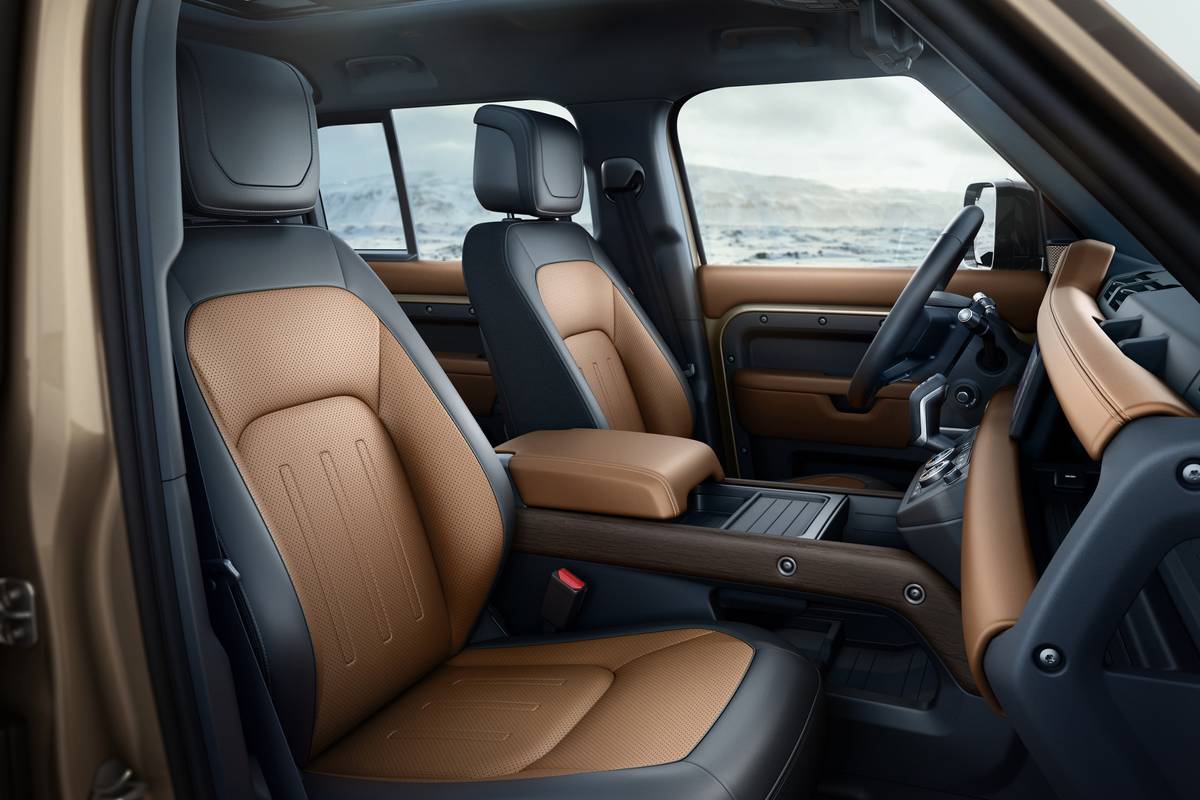 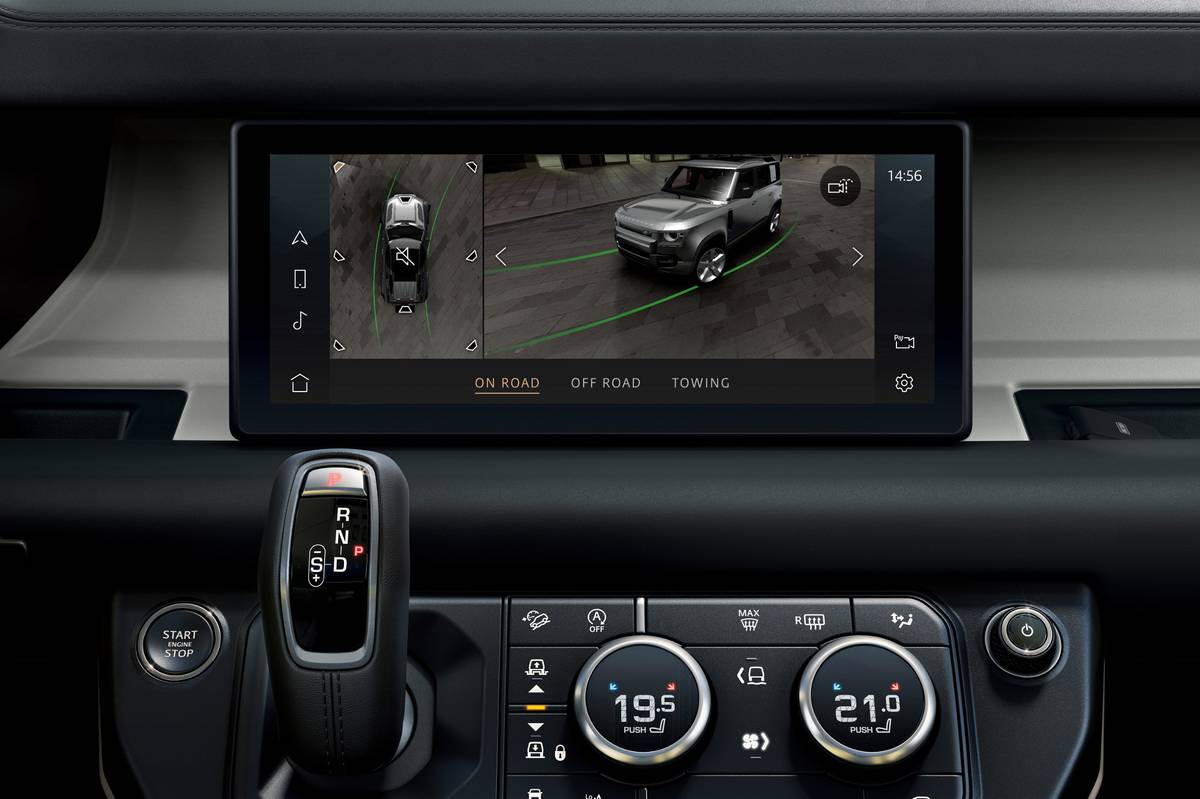 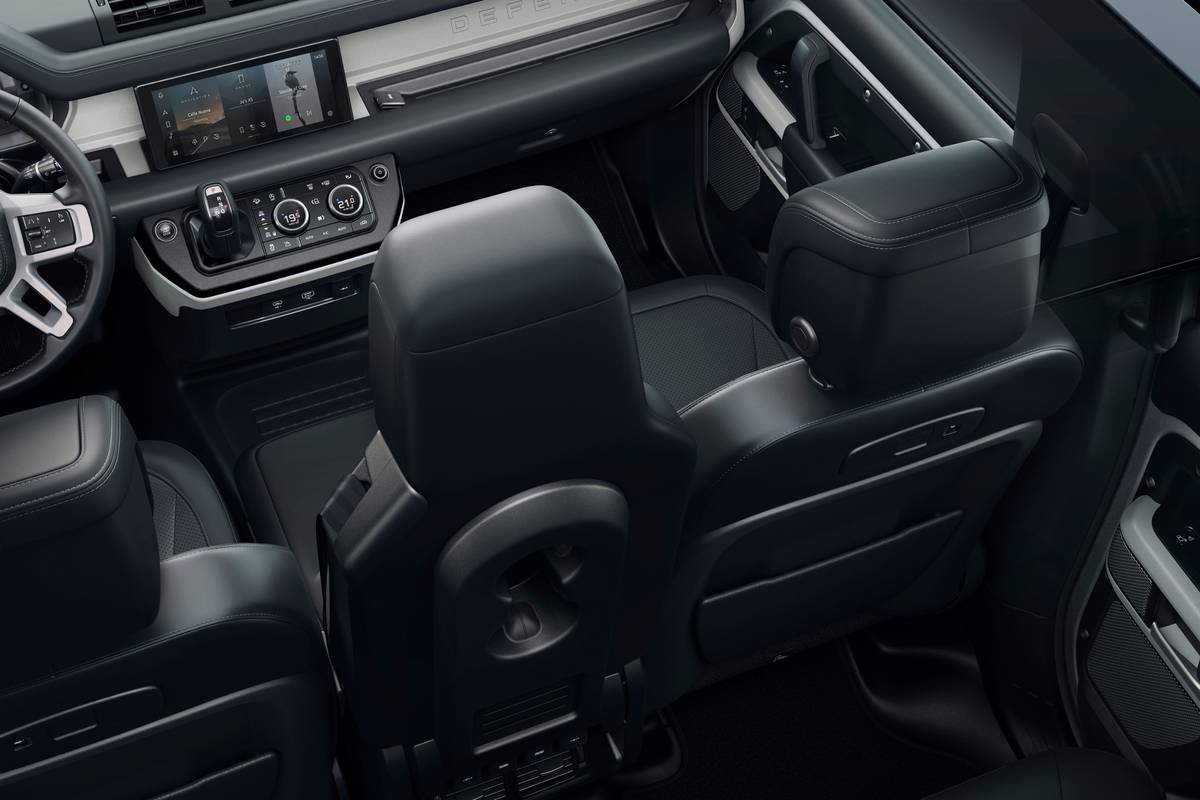 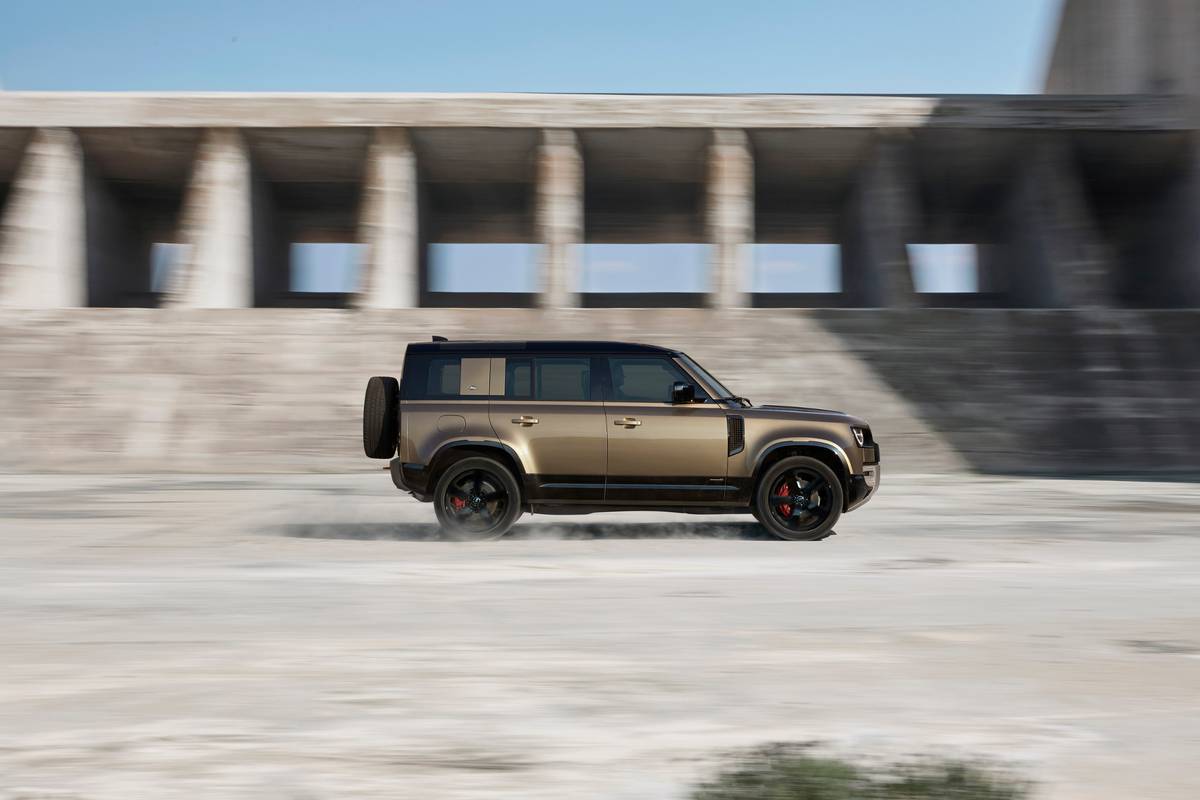 Looks like: A slick and modern Land Rover SUV, still boxy and with plenty of retro cues to recall the old Defender, but less funky personality

The iconic Land Rover Defender returns to the U.S. in 2020 as a reengineered and thoroughly modern 4×4 utility with as much capability but more space, a lot more technology and more luxury than its predecessor — along with luxury prices.

It’s just the second generation of the SUV with roots — like the Jeep Wrangler with which it will compete — as a humble and utilitarian vehicle from the 1940s. While the last generation soldiered on in some markets until 2016, it hasn’t been on sale in the U.S. since the Clinton Administration due to its lack of modern safety equipment. The 2020 arrives as highly capable 4×4 competition includes Toyota’s 4Runner and Mercedes-Benz’s G-Class along with the Jeep, and may also soon include a revived Ford Bronco.

The Defender reincarnation was unveiled today at the International Motor Show Germany in Frankfurt, and the mid-size, four-door 110 version will go on sale in the U.S. in the spring, with the shorter-wheelbase, two-door 90 model due in late 2020. (A stretched 130 version is expected, though not confirmed, for 2021.) The numbers refer to the wheelbase lengths of the classic Defender’s models, though the 2020s are bigger, with the 110 riding a 119-inch wheelbase and the 90 at 101.9.

The Defender, like the Wrangler, has been an important halo vehicle worldwide for its brand, and it will be back in the U.S. — Land Rover’s biggest market — for the first time since 1997. Full pricing is still to be announced, but Land Rover says that the 110 will start at $50,925 (including a $1,025 destination charge) for the base model and rise through six trim levels (Defender, Defender S, Defender SE, Defender HSE, Defender First Edition and Defender X) to the top-of-the-line Defender X starting at $81,925.

Exterior: Squint and You Might See the Old One

The boxy profile, horizontal lines and off-road-friendly short overhangs remain, though the overall look is softer and more aerodynamic, and the windshield is more raked. The back end is squared off, though, and the new Defender still has a side-opening rear door accommodating a full-size spare hanging on the back. The flat roof also again is pierced by horizontal Alpine  windows to let in light. Throwback lights have been replaced by distinctive, high-tech headlights and taillights.

The design is respectful of the old Defender, but less so than the latest Wrangler redesign is in keeping features of the old. And the new Defender abandons the body-on-frame construction for a version of the unibody platform under the Land Rover Discovery — which should make it less trucklike in both demeanor and look as well as offer more efficient use of space.

“The new Defender is respectful of its past but is not harnessed by it,” Gerry McGovern, Land Rover chief design officer, said in a statement.

The top Defender X trim level gets a gloss-black hood accent and claddings, along with satin-finish skid plates and other exterior trim. Buyers can order a factory “Satin Protective Film” wrap to protect the bodywork and add a satin-finish look. Wheels range from standard 18s to a whopping 22 inches. When the 90 model arrives, it will offer a full-length fabric roof for open-air treks.

As you’d expect in a Land Rover, there are varied leather and textile upholstery and trim finishes offered for the interior, but the design is less high-style and more about practicality than others. A choice of center consoles is offered for storage options, and also available is a distinctive center “jump seat” that can offer three-across seating in the front row or fold down for storage and cupholders. That means five- or six-seat configurations for both the 110 and 90, and the 110 offers a “5+2” version with occasional seats in the back.

There also are more exposed structural members and painted surfaces inside, as well as rubberized floor coverings that can be wiped clean (carpet mats are available) and a synthetic textile on high-wear areas.

A 10-inch touchscreen is powered by a new-generation multimedia system along with standard Apple CarPlay and Android Auto. An available Wi-Fi hot spot, over-the-air update capability and a 12.3-inch configurable instrument display and up to five USB ports bring modern tech and connectivity inside.

Permanent all-wheel drive is standard and features a two-speed transfer case with low-range gearing. There is a lockable center differential and locking rear differential. And Land Rover’s configurable Terrain Response 2 system offers tailored all-wheel-drive settings for various conditions, though you also can create your own. An air suspension is optional and can raise ground clearance to 11.5 inches from the standard 8.5 inches. At the higher off-road setting, approach and departure angles are an impressive 38 degrees and 40 degrees, respectively, with a breakover of 28 degrees for the 110 and 31 for the 90.

Should you want to go wading, the Defender can handle 35.4 inches and the water depth can be displayed on the touchscreen. While that’s interesting, the fun feature is the ground-view camera system, first seen on the 2020 Range Rover Evoque, that displays on the screen a view of the ground under the hood and directly ahead of the front wheels.

Taking a page from Jeep’s profitable offering of Mopar accessories for buyers, the Defender will offer a range of add-ons. There will also be four bundles of appearance and functional items aimed at different buyers: Explorer, Adventure, Country and Urban. The components of the various bundles and standalone accessories range from more aggressive or fancier trim pieces and classic mud flaps to an onboard air compressor and built-in winch, roof racks, a ladder, external gear carriers and cargo management. One of the more interesting add-ons is a “Portable Rinse System” with a pressurized 1.7-gallon water reservoir.