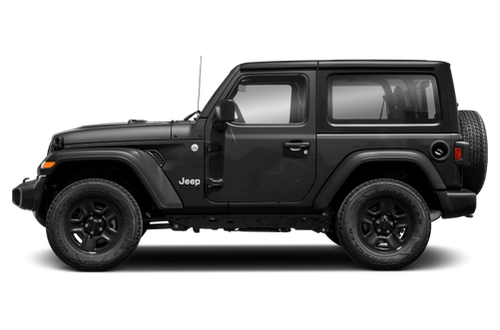 The Wrangler is Jeep’s wildly popular 4×4. It’s available as a two-door or four-door SUV, the latter known as the Wrangler Unlimited. The two-door model has room for four people while the Unlimited version seats five.

A standard 285-horsepower, 3.6-liter V-6 engine pairs with a six-speed manual transmission; an eight-speed automatic is available. There’s also an optional 270-hp, turbocharged 2.0-liter four-cylinder that delivers 295 pounds-feet of torque; it pairs with the eight-speed automatic. A turbo-diesel 3.0-liter V-6 that works with an eight-speed automatic is newly available for the Wrangler Unlimited. Four-wheel drive is standard, and the Rubicon trim level features upgraded mechanicals for serious off-roading. Wrangler competitors include the Land Rover Defender, Toyota 4Runner and Jeep Grand Cherokee.

The big news is the new turbo-diesel V-6 that joins the Wrangler Unlimited’s engine offerings. It makes 260 hp and a whopping 442 pounds-feet of torque. The Unlimited also offers versions of the gas V-6 and turbo four-cylinder with the eTorque mild-hybrid system.

What Features in the 2020 Jeep Wrangler Are Most Important?

The Wrangler is all about off-road driving, or at least the image of it. Even if you never put one tire onto a muddy surface, the Wrangler’s go-anywhere attitude is part of its appeal.

While it has a rugged image, available comfort features include heated front seats, a heated steering wheel and an 8.4-inch touchscreen multimedia system that includes Apple CarPlay and Android Auto smartphone connectivity. The Wrangler Unlimited offers more towing capability than the two-door variant, and the diesel V-6 should make the task easier even if it doesn’t increase the Unlimited’s 3,500-pound towing capacity.

The Wrangler and 4Runner are legends among fans of off-roading, but there are some major differences between these two SUVs. To start, the Wrangler is available in two- and four-door form while the 4Runner is a four-door SUV. With its new engines, the Wrangler also offers more choices under the hood; in the 4Runner, the sole engine is a 270-hp V-6. The 4Runner can seat up to seven with an available third row, and it does offer rear-wheel-drive versions if you don’t plan on venturing off-road. In terms of ride and handling, these SUVs are fairly evenly matched but are less comfortable and don’t handle as well as similarly sized crossover SUVs.

The Wrangler is a back-to-basics SUV, but that doesn’t mean it comes cheaply. The base two-door model lacks creature comforts like power windows and power locks but still starts around $30,000. The Wrangler Unlimited is even pricier. For your money, you get a rugged 4×4 that’s fun to drive, has an iconic look and is extremely capable off-road. Better still, the latest Wrangler is better behaved than its predecessor on paved roads.

Lots of fun and reliable

by Marty McFly from Cincinnati OH on October 6, 2020

This car is exactly what I am looking for especially during the winter months and traveling with a small trailer in tow. I wanted something reliable and could handle snow covered streets. Read full review

I love my Jeep. I didn’t even have it an hr when I took it mudding. I had a blast and it handled it very well. Read full review

The 2020 Jeep Wrangler currently has 0 recalls

Based on 2020 Jeep Wrangler Sport

NHTSA rates vehicles using a star rating system from 1-5 stars, with 5 being the highest.

National Highway Traffic Safety Administration (NHTSA) is part of the U.S. Department of Transportation. NHTSA provides vehicle safety information such as front- and side-crash ratings and rollover ratings. Vehicles are rated using a star rating system from 1-5 stars, with 5 being the highest.

All Model Years for the Jeep Wrangler

Certified child passenger safety technicians conduct hands-on tests of a car’s Latch system and check the vehicle’s ability to accommodate different types of car seats. The Wrangler received the following grades on a scale of A-F.*
* This score may not apply to all trims, especially for vehicles with multiple body styles that affect the space and design of the seating.