Would you pay an extra $17,000 for another 235 horsepower? It’s an interesting proposition more frequently posed to consumers shopping performance coupes and sedans. But three-row SUVs? Dodge Durango shoppers now have to assess that very question when deciding between the 475-hp 2021 Durango SRT 392 and the new-for-2021, 710-hp, supercharged Durango SRT Hellcat. The dueling SUVs start respectively at $66,065 and $82,490, but our well-optioned examples came to $72,660 and $89,665. (All prices include the destination fee.)

That’s why we took both to the drag strip to see how quickly each can accelerate from 0-60 mph and through the quarter-mile, and to shed some light on whether the Dodge Durango SRT Hellcat and its supercharged V-8 is appropriately quicker than the Durango SRT. 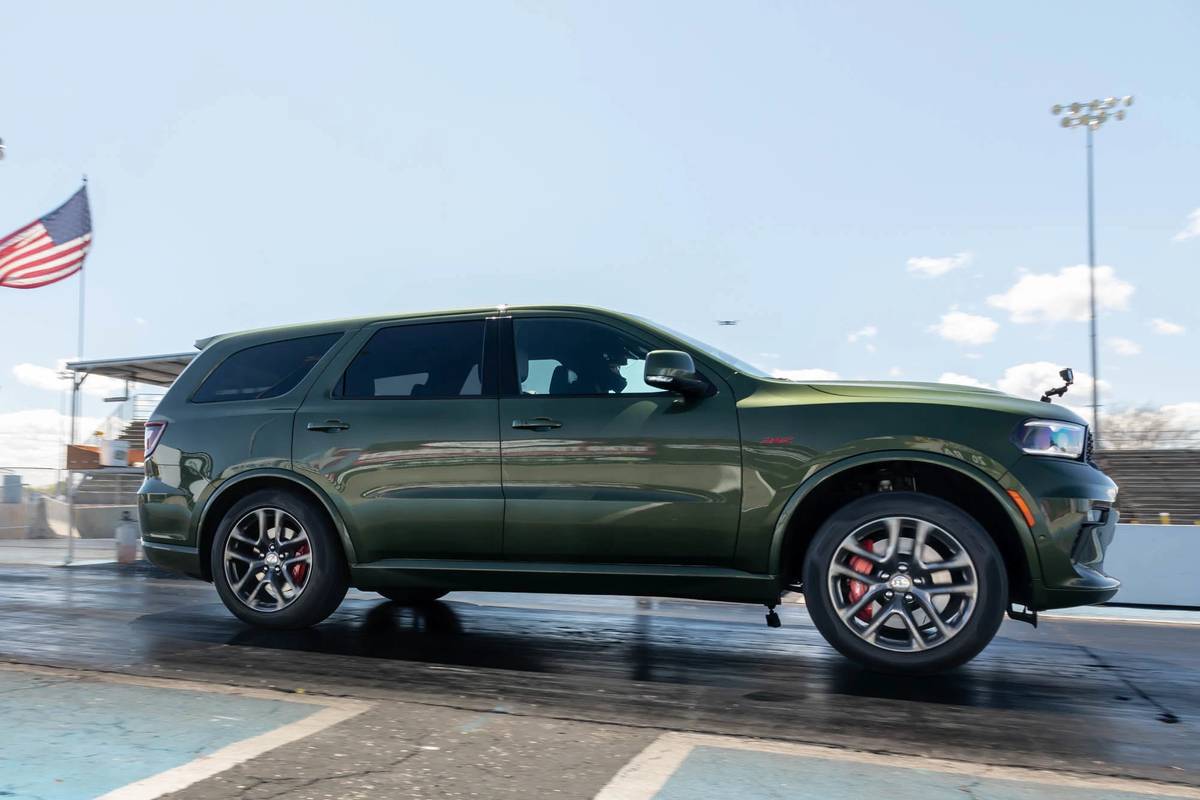 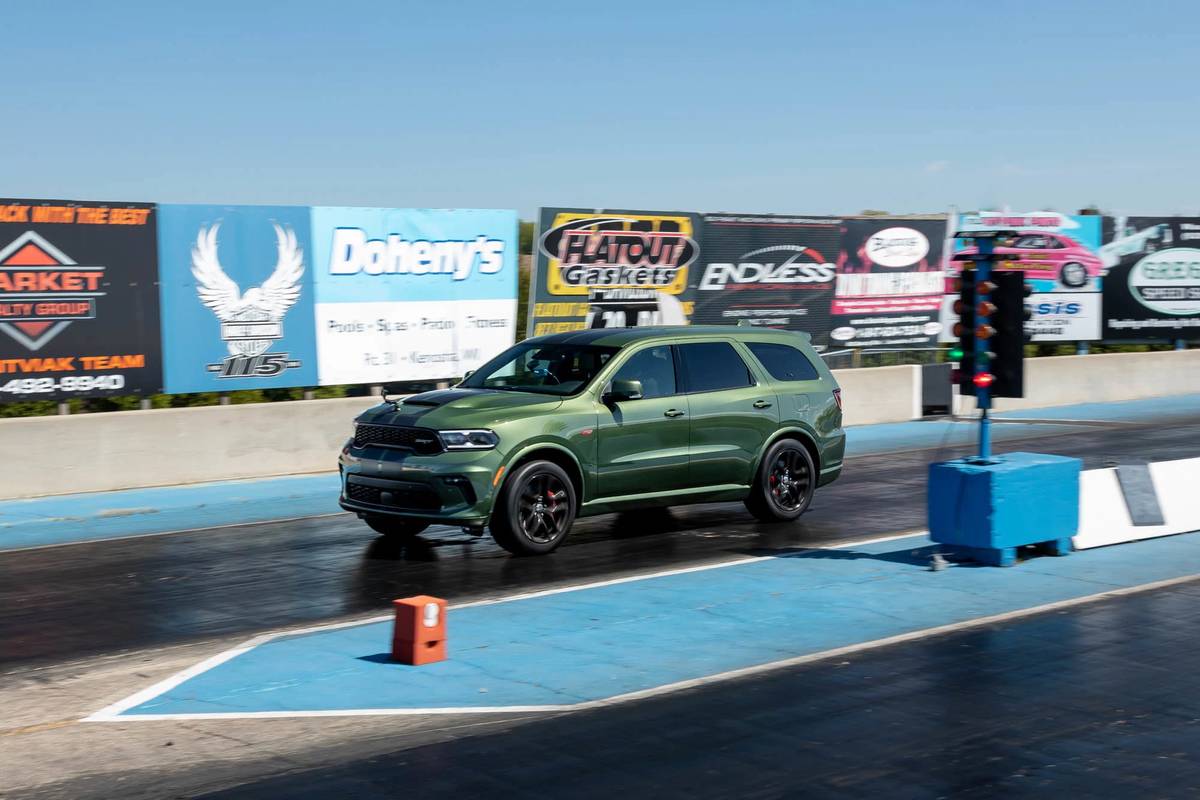 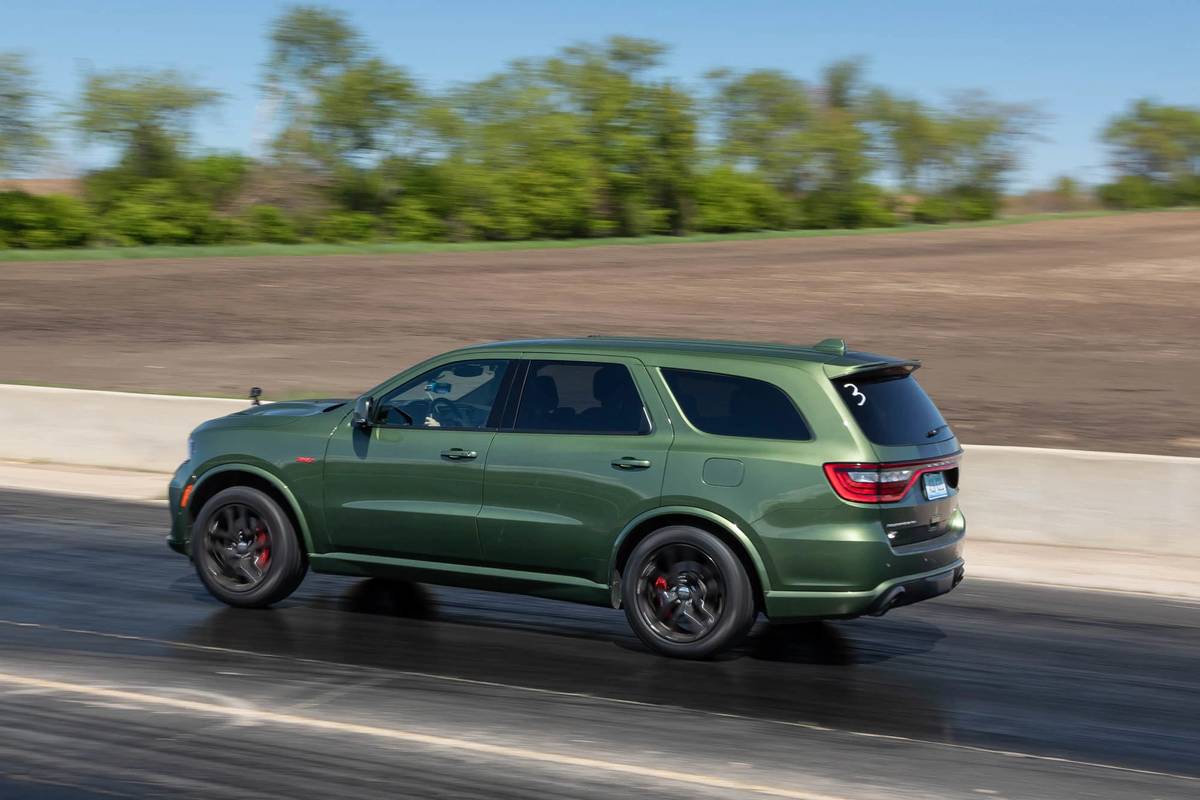 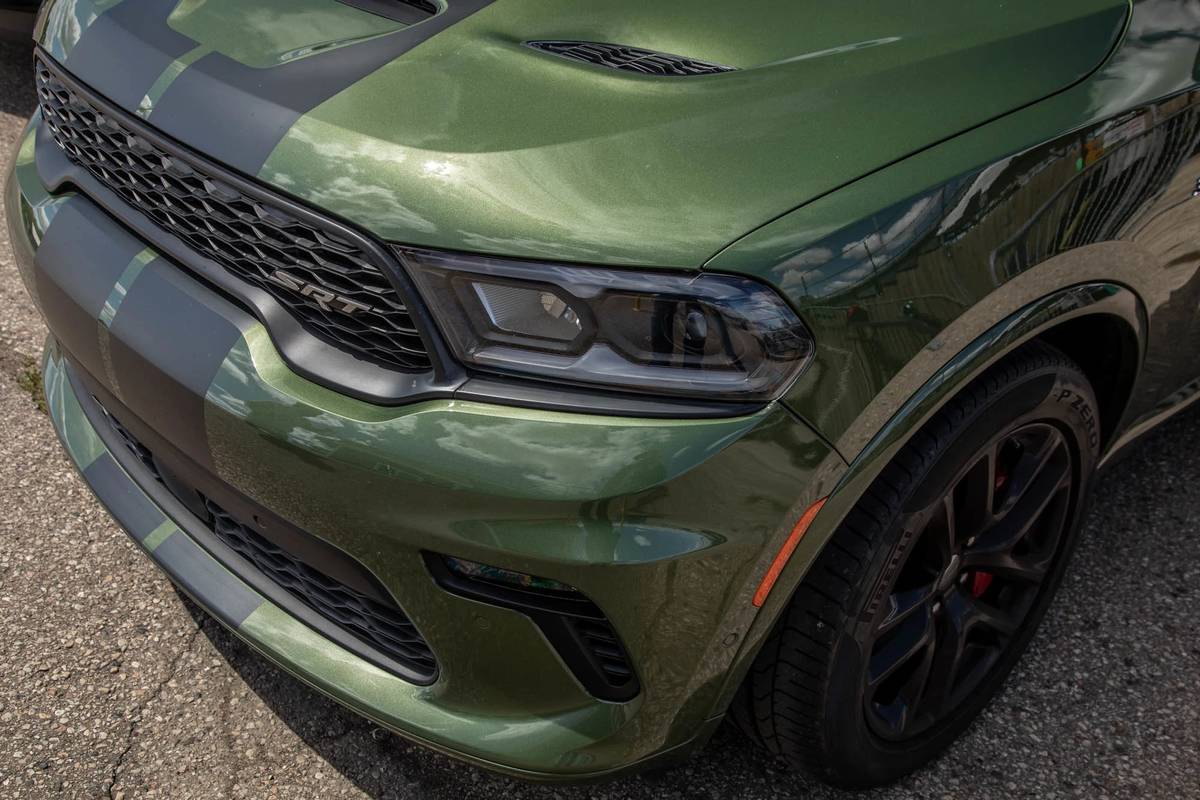 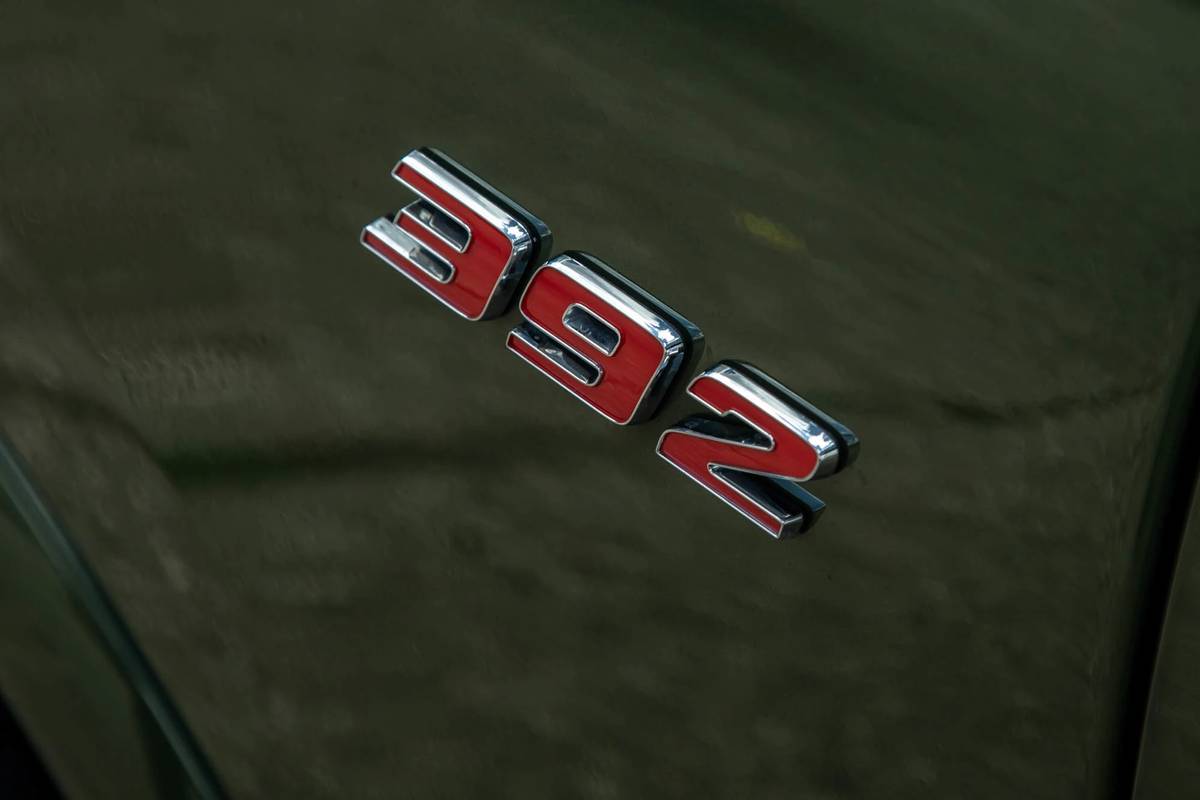 To demonstrate the physics these Durangos must overcome, the Durango SRT 392 weighs 5,378 pounds. That’s as much or more than some half-ton pickup trucks, and this is the lighter of the two. But the SRT 392 doesn’t hesitate to accelerate thanks to its driving force, a 6.4-liter V-8 making 475 hp and 470 pounds-feet of torque. It’s paired with an eight-speed automatic transmission and all-wheel drive. I last drove this SUV on the Indianapolis Motor Speedway infield road circuit when it debuted, and the hulking SUV was out of place trying to turn left and right. But it feels much more at home on the drag strip.

A modest 475 hp (at least, compared with its sibling) and AWD leaves little room for wheelspin on our sticky, prepped drag strip, so the approach to the SRT 392’s first pass was to peg the SUV’s driver-selectable launch control setting at 3,500 rpm and let it rip. This netted a 12.94-second pass at 102.98 mph and 0-60 time of 4.48 seconds. Basically one and done, matching Dodge’s acceleration claims.

Our subsequent pass went quicker still, without launch control but two-footing the brake and accelerator to rev the engine as high as it could without leaving the starting line. Here, the Durango SRT 392 entered its Torque Reserve mode, which involves engine management trickery to hold a reserve of air in the intake manifold. Dodge says that reduces the amount of time it takes the manifold to fill with air for a quicker initial hit. It also makes a notable burbly engine note when activated above 1,350 rpm. The SRT uses Torque Reserve in its launch control setting, too, but our quickest pass seemed to flash the engine up higher than launch control’s chosen rpm to a slightly better 12.88-second pass at 103.66 mph. Our quickest 0-60 time, according to our Racelogic Vbox GPS data logger, was 4.48 seconds excluding a 1-foot rollout, like what’s used in the drag strip’s quarter-mile times, which can shave a few tenths of a second.

These times fall right on top of Dodge’s claim of 0-60 in 4.4 seconds and the quarter-mile in 12.9 seconds, and it was a breeze to get there in just four passes. The Durango SRT Hellcat, though? A completely different animal. 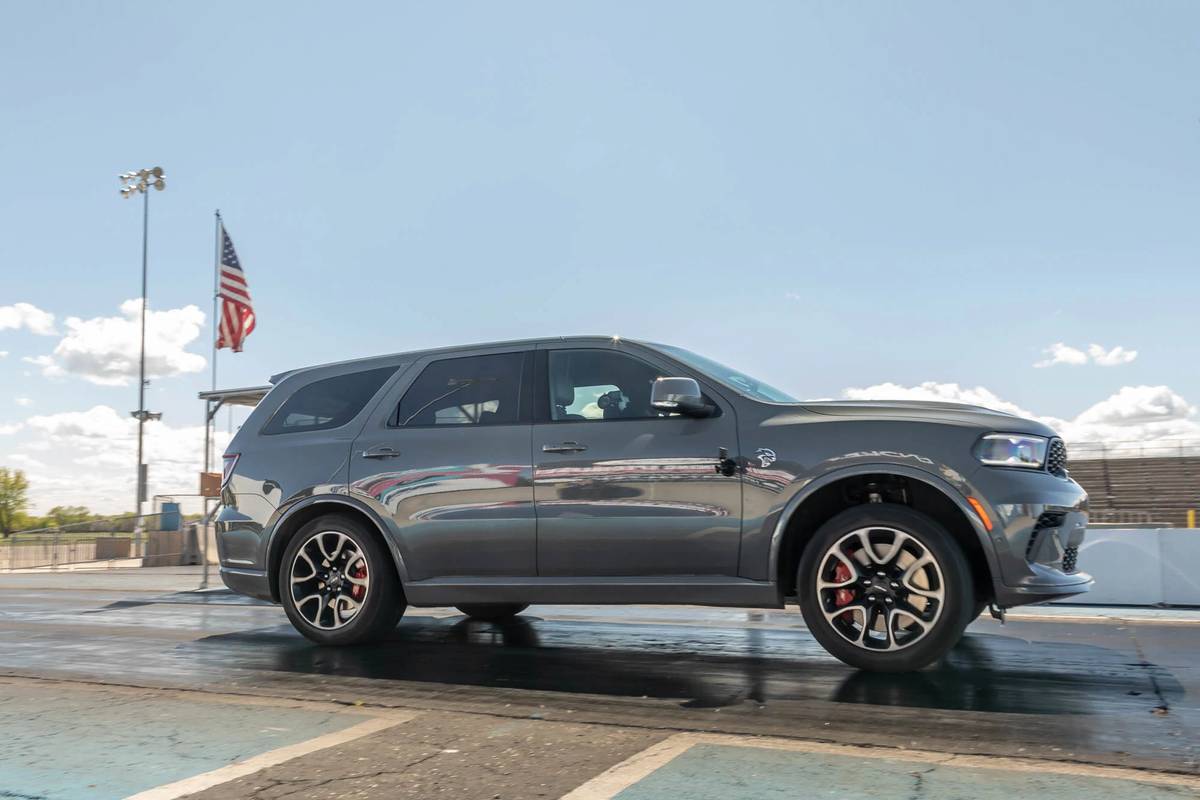 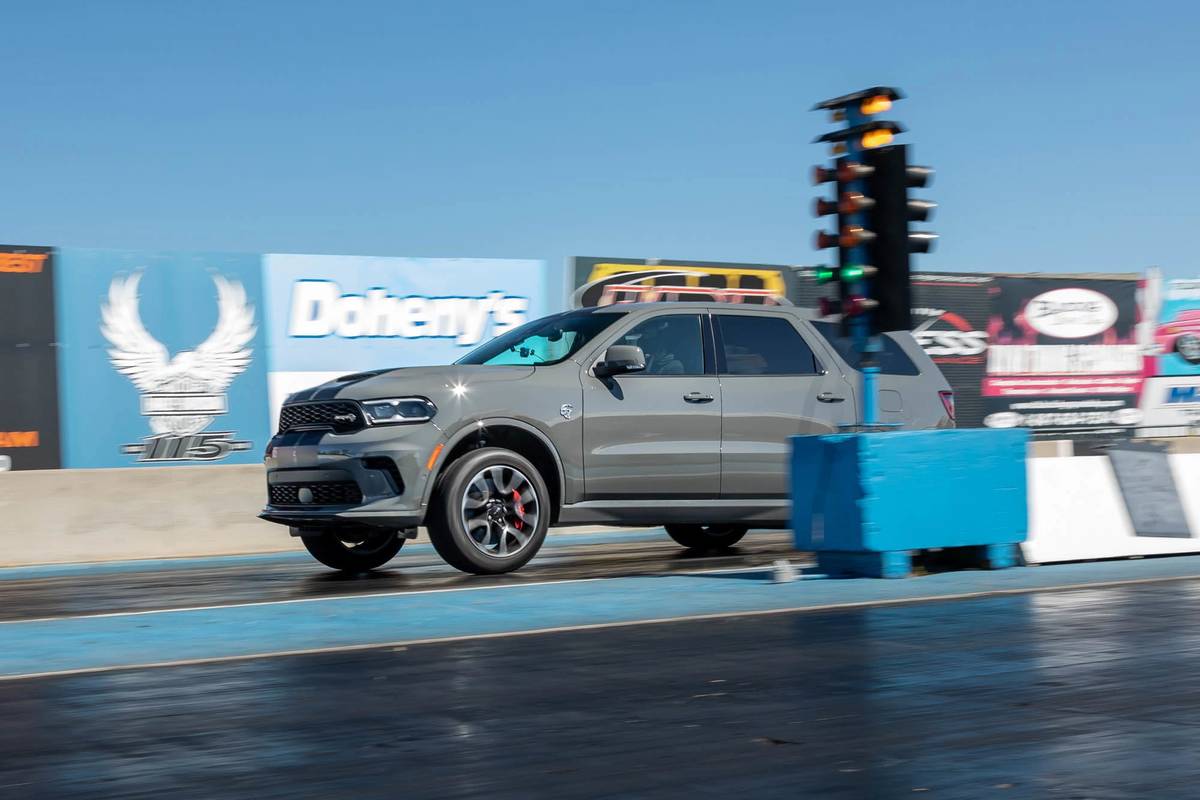 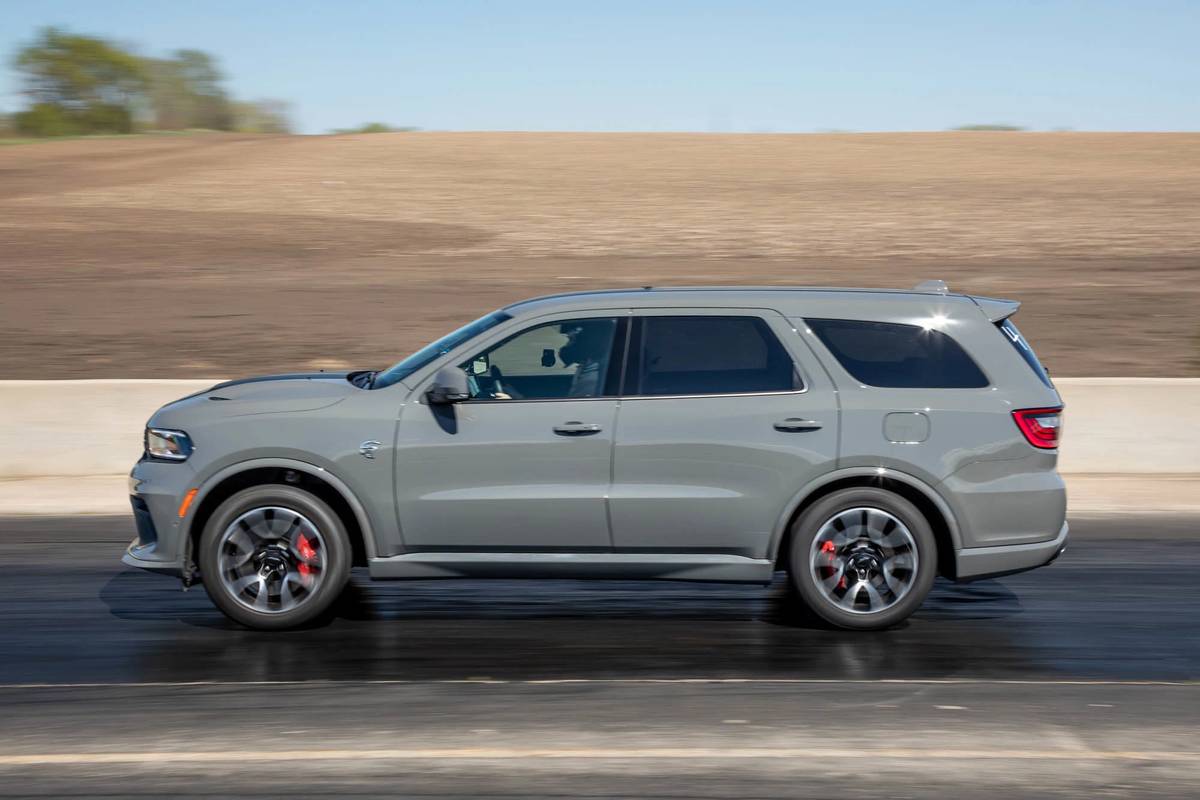 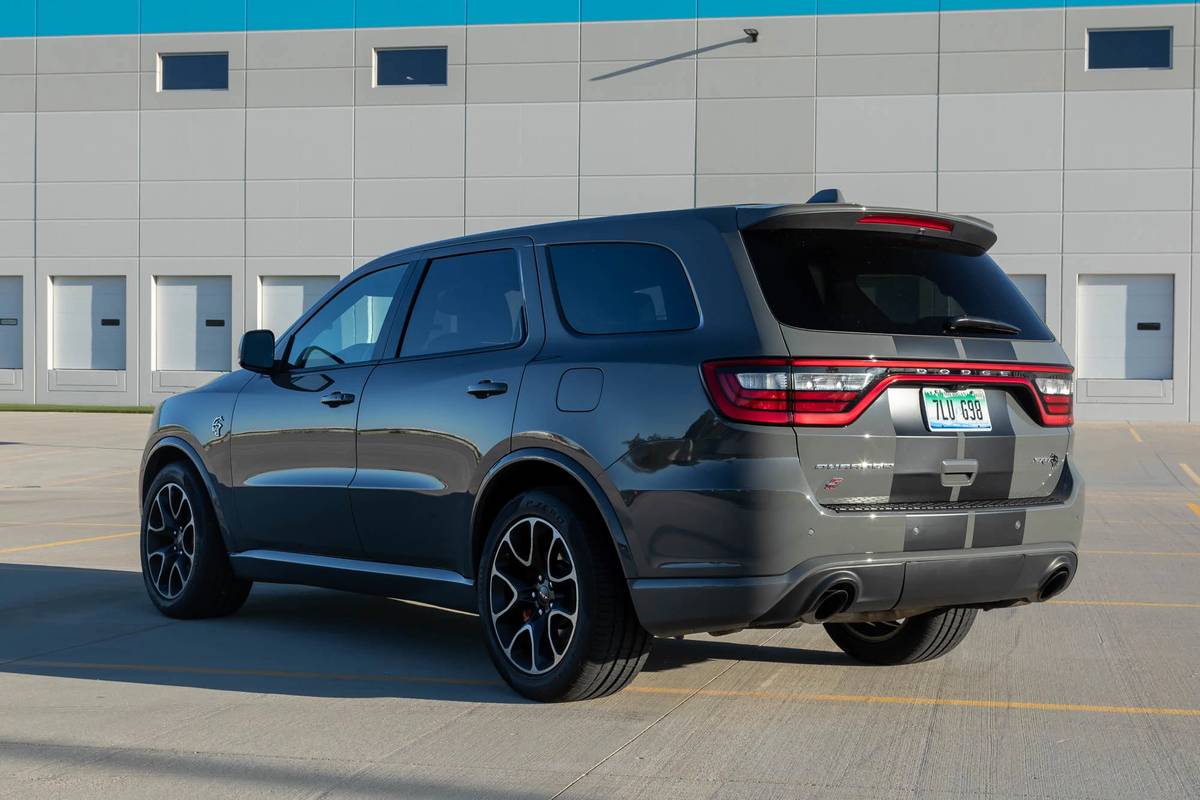 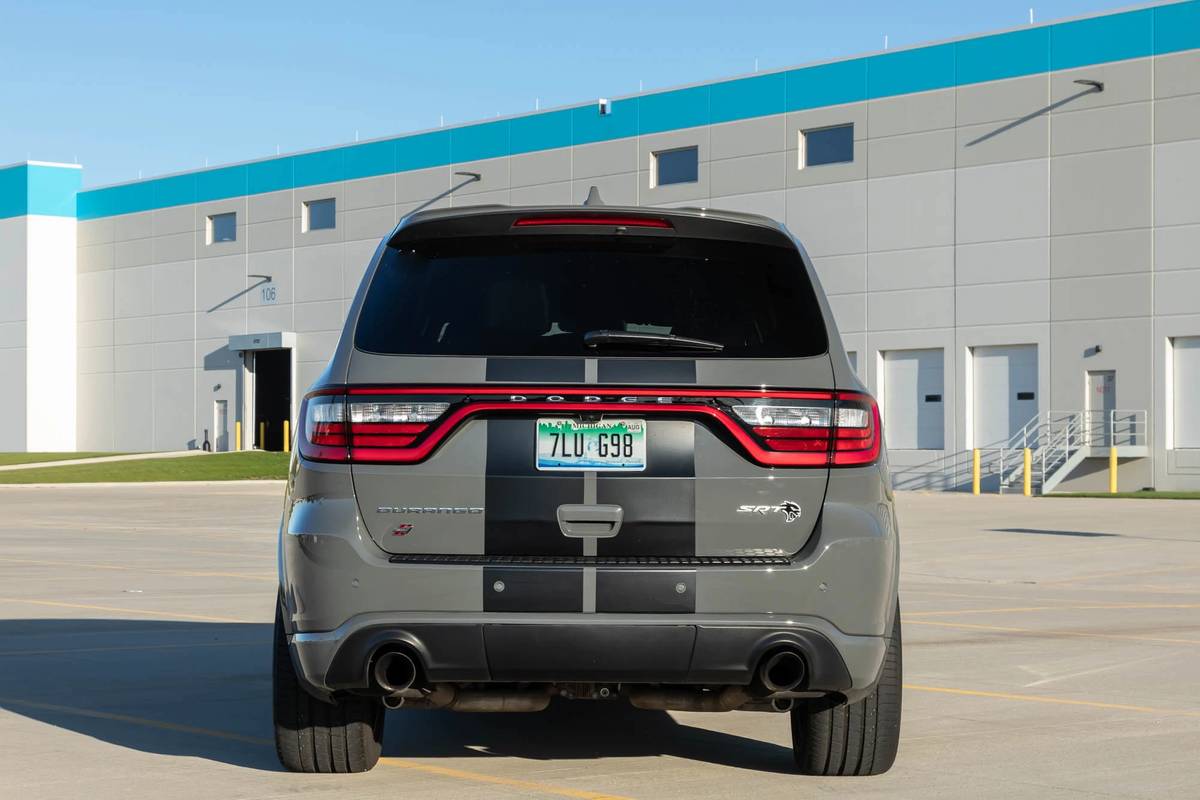 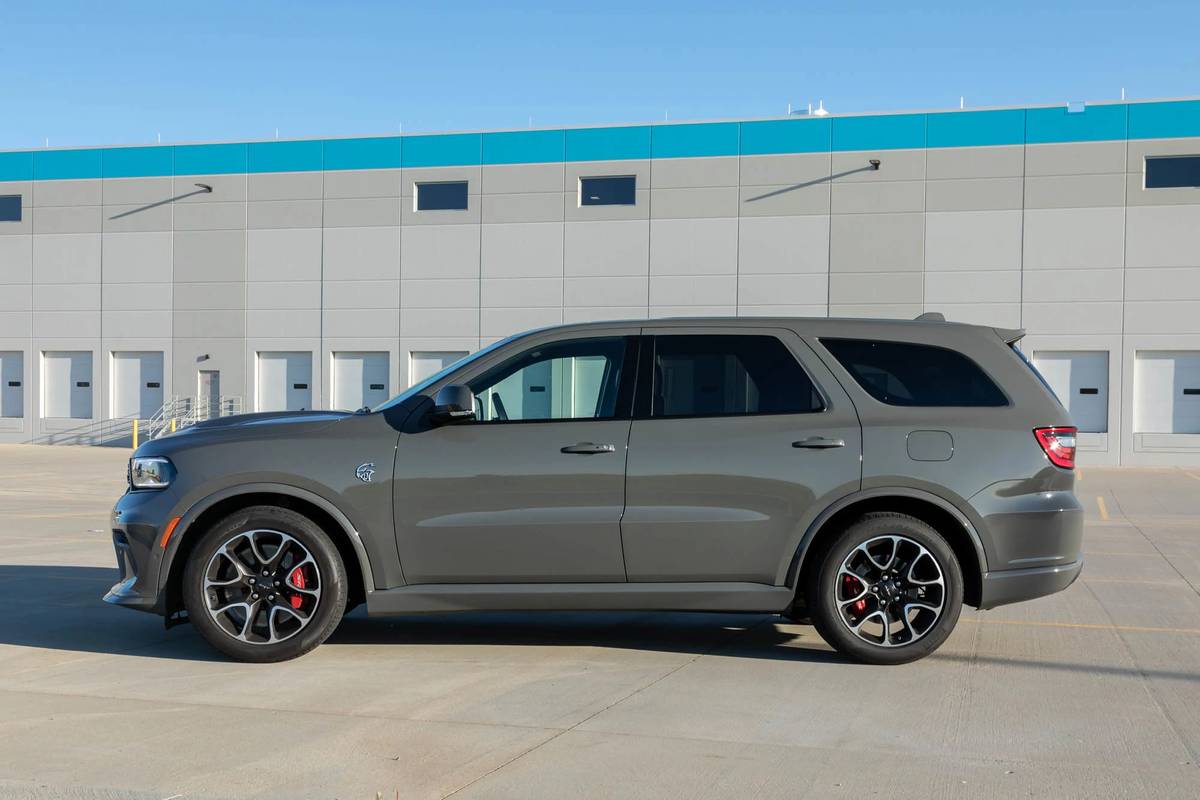 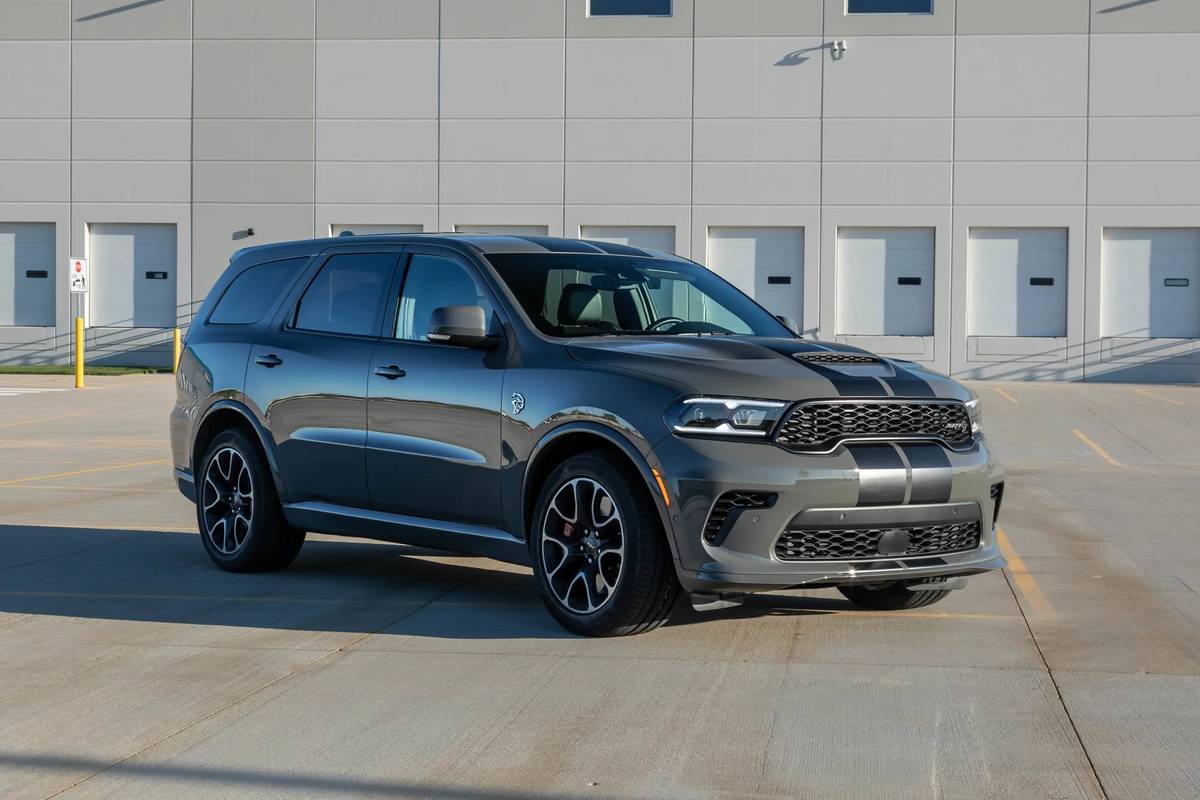 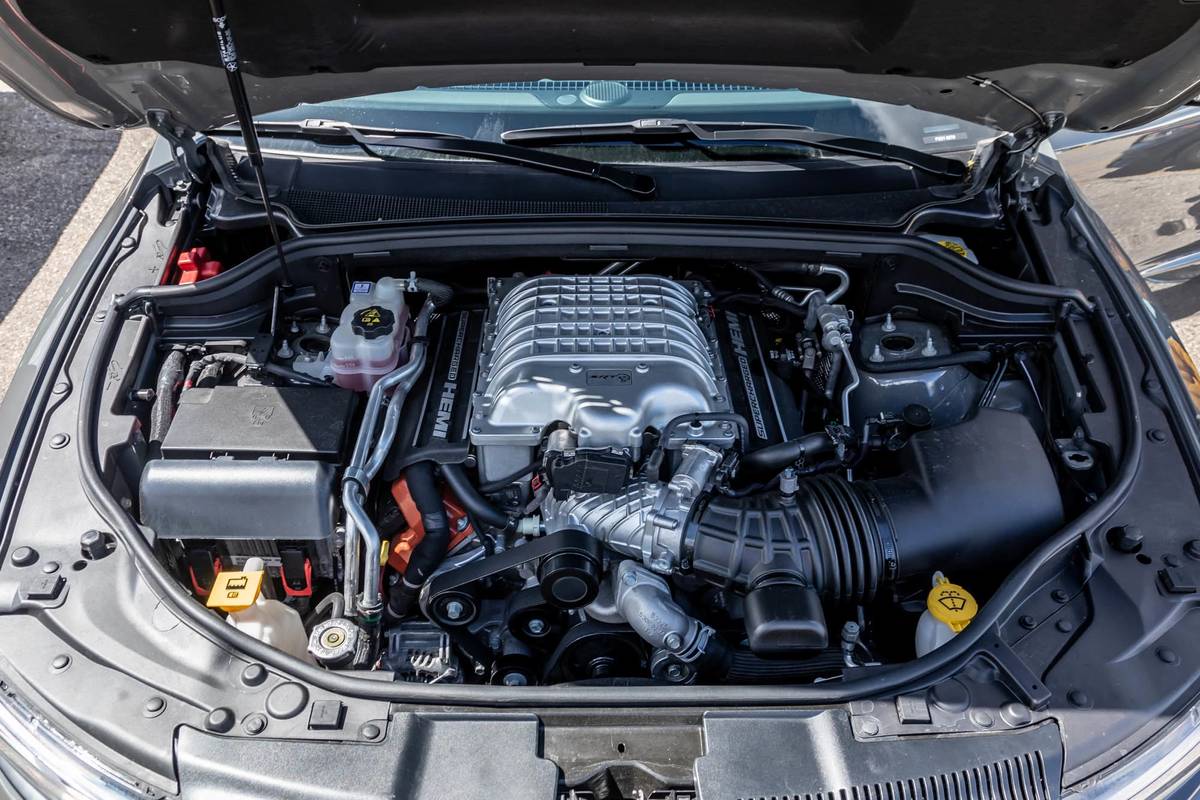 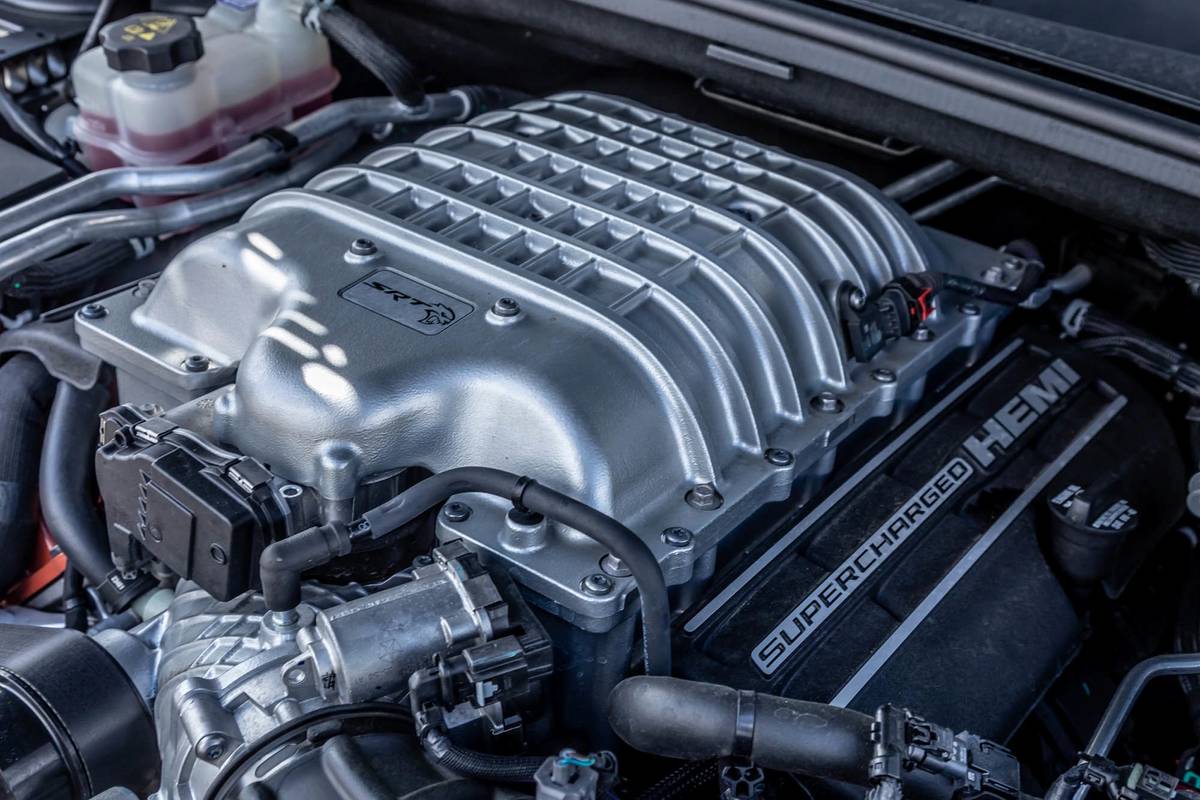 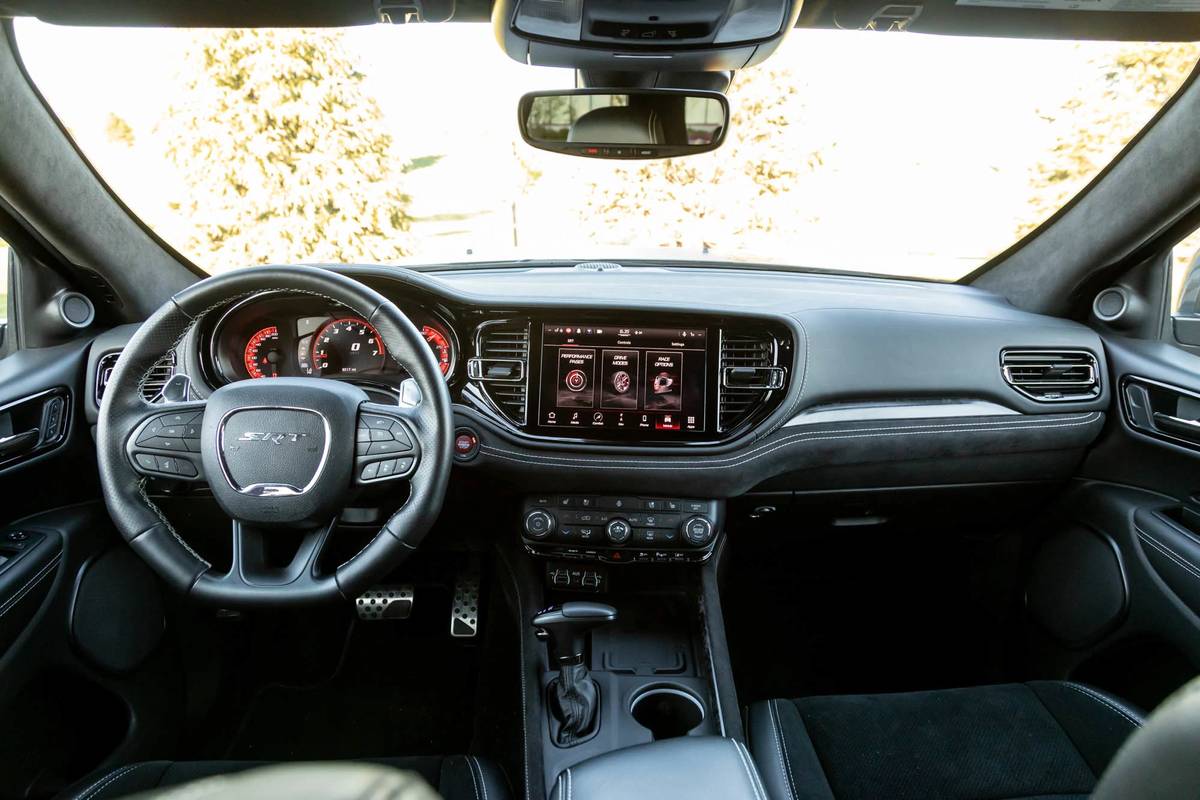 The Durango SRT Hellcat has an extra 235 hp. Let me say that again: an extra 235 hp. The difference between these two Durangos is more than an entire Volkswagen Golf GTI. But it’s also carrying more than 300 pounds of extra weight, tipping the scales at 5,710 pounds.

The first pass was an eye-opener after the smooth, effortless acceleration of the SRT 392. Even with AWD, the 710 hp and 645 pounds-feet of torque churning through the SRT Hellcat makes for a white-knuckle pass as the car tugs and pulls down the track, making short work of the quarter-mile at 100-plus-mph speeds. There’s minimal refinement here — just brute, aggressive power delivery that tingles all the senses.

On the first pass, I used launch control at 2,200 rpm, which Dodge engineers tipped us off before the test as the optimal engine speed for the fastest times. We tripped the clocks at 11.61 seconds at 117.87 mph after the Hellcat jumped from the line, spun its tires, wheel-hopped and jiggled through 1st gear. That was the first pass — and ultimately one of the slowest of the day. Still, this three-row SUV ran faster than my nice-weather-only, drag-radial Pontiac Trans Am, which I’ve mildly worked over to run 11.82 seconds. (Which made me ask: What are 1998 Trans Ams with 125,000 miles going for these days? Still nothing? Sigh.)

Dejections aside, it was time to work toward Dodge’s estimated times of 11.5 seconds in the quarter-mile and 0-60 in 3.5 seconds. Using launch control, you’re instructed to hold the brakes and simultaneously hold the throttle wide-open to engage the setting at its predetermined engine speed. That proved all but undoable: Even with 295 millimeter-wide high-performance summer tires up front, plus a sticky track and full force on the brakes, it was impossible to hold all 710 hp back for any amount of time; the Durango Hellcat would simply drive through its brakes.

After seven passes honing the launch technique to quell wheelspin and hop, I whittled my time down to 11.51 seconds at 117.35 mph with a 0-60 time of 3.5 seconds. The trick for me was to avoid launch control. My quickest times came from two-foot launching the Hellcat from 1,600 to 1,700 rpm, where the SRT Hellcat’s Torque Reserve did its thing, but without using launch control. It was a lot more work than I anticipated, as the AWD Durango still had enough power to leave strips of rubber down the track — a fight I’d already had with the rear-wheel-drive Dodge Challenger Hellcat Redeye earlier in the day.

Between the Durango SRT 392 and Durango SRT Hellcat, the difference we measured — 1.37 seconds in the quarter-mile and 0.98 second to 60 mph — is something you feel in the seat of your pants. In the Hellcat, you also get it up your spine and through your skull, what with the exhaust wail, supercharger whine and gut-wrenching launch to 60 mph that offers amusement-park levels of entertainment. While both offer tow ratings of up to 8,700 pounds, the SRT 392 is a Durango you could use to tow your fun car to the track. The Durango SRT Hellcat is quick enough to be your fun car. Is that worth it? Perhaps, considering the Hellcat could also be your family car.

On the downside, the Hellcat is a very limited run compared with the SRT 392. Dodge originally planned to offer it for just the 2021 model year and limit production to roughly 2,000 units. It announced in January that all preorders were sold but later reportedly said more Durango Hellcats would be made. Currently on Cars.com, we’re seeing more SRT Hellcats than SRT 392s, so if you need some persuasion to open your wallet, what better reason than there being more SRT Hellcats for sale right now?