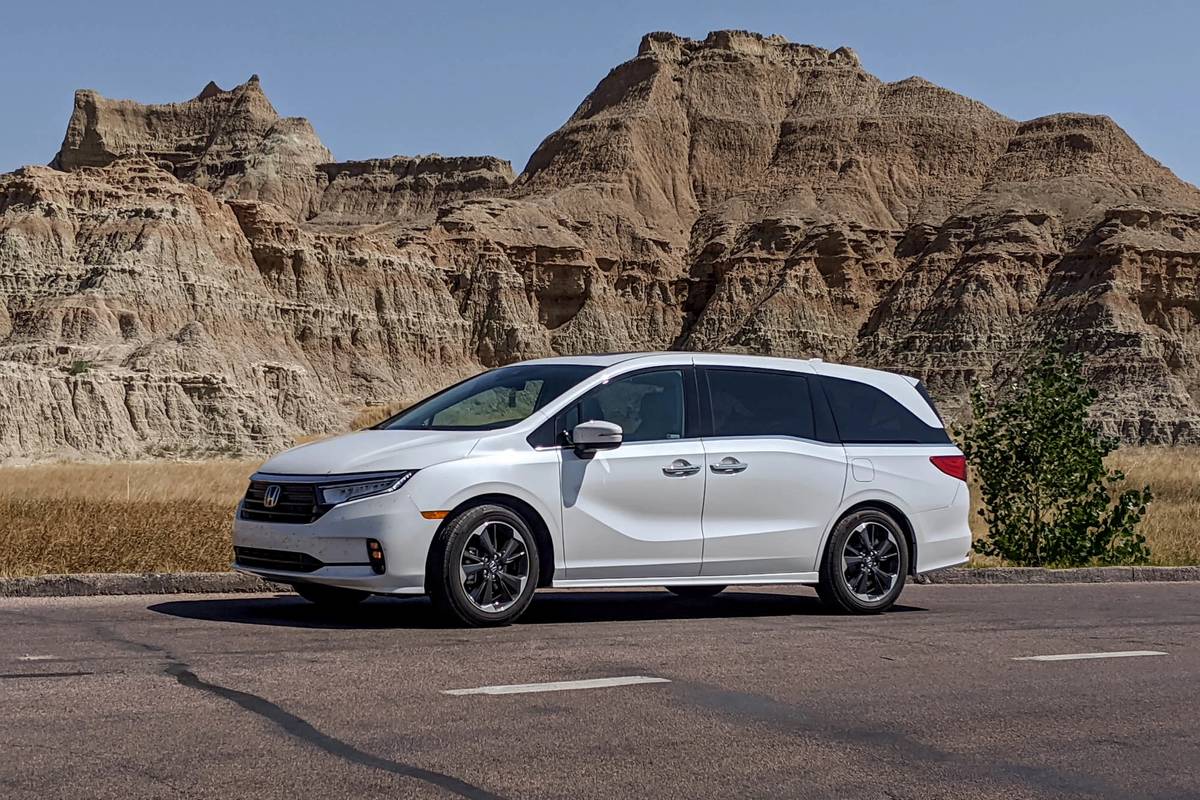 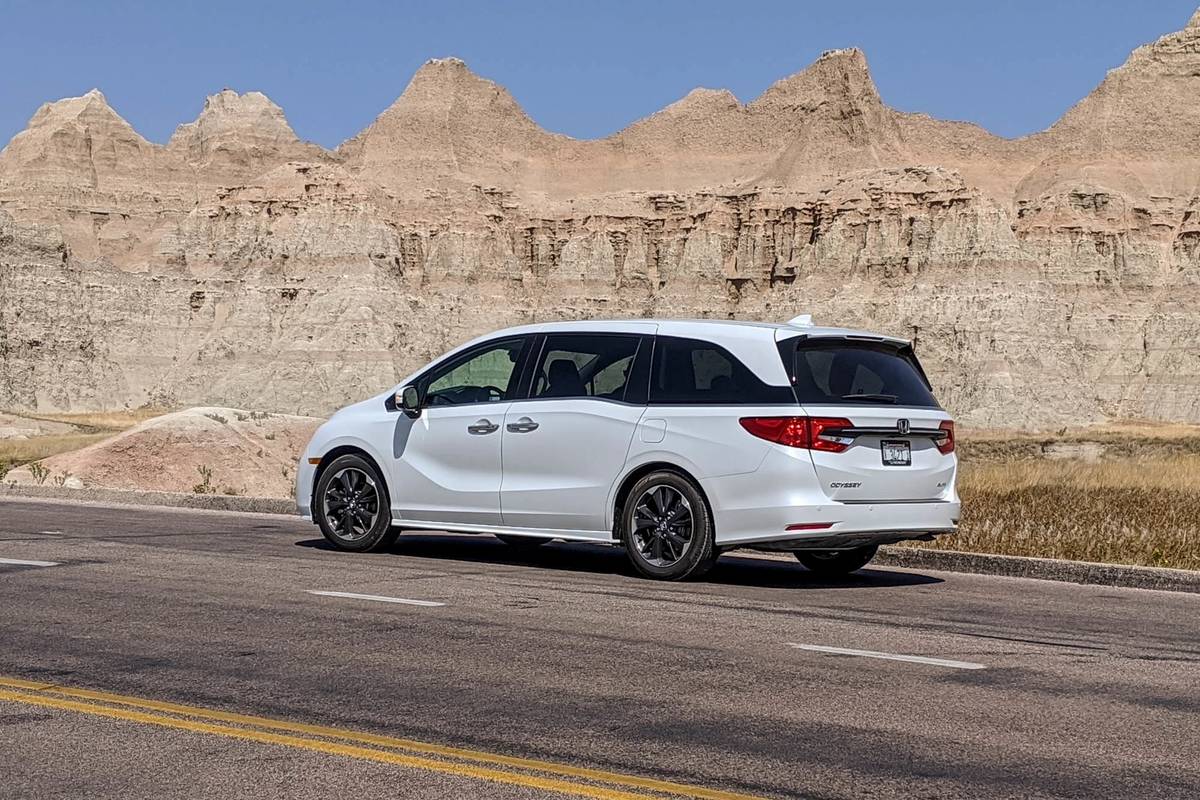 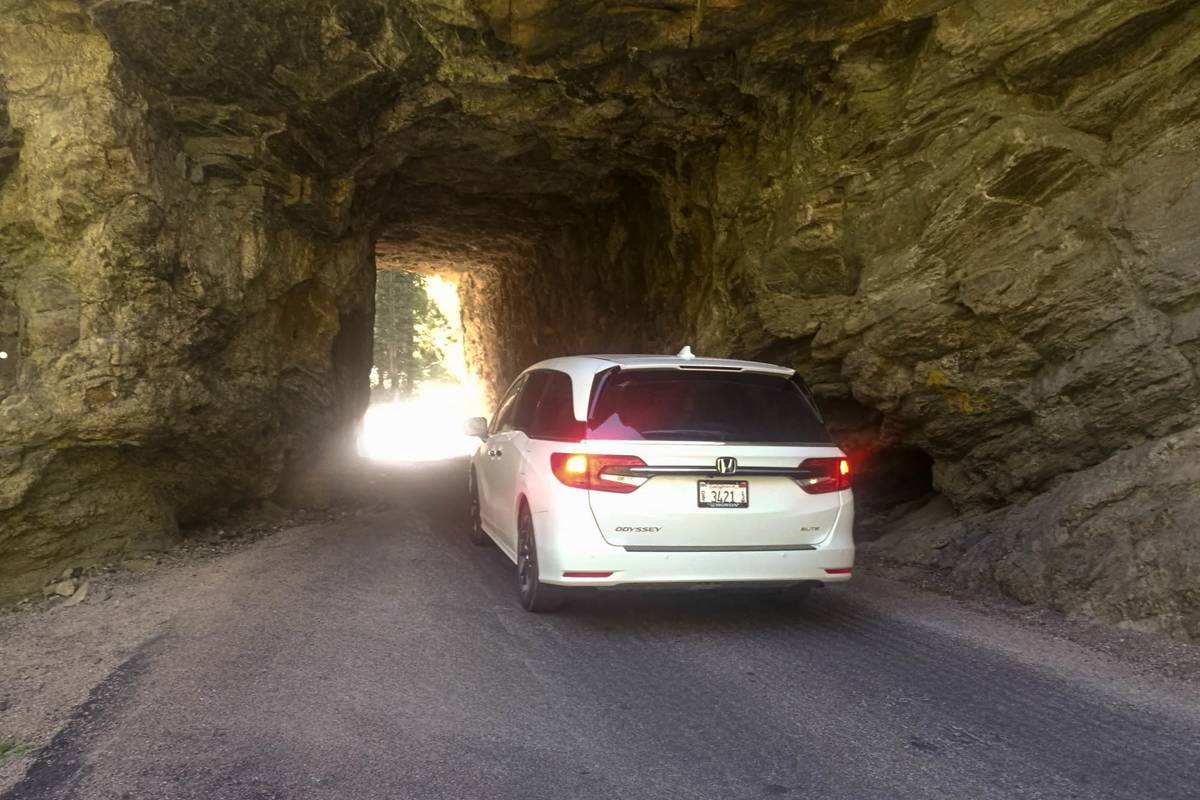 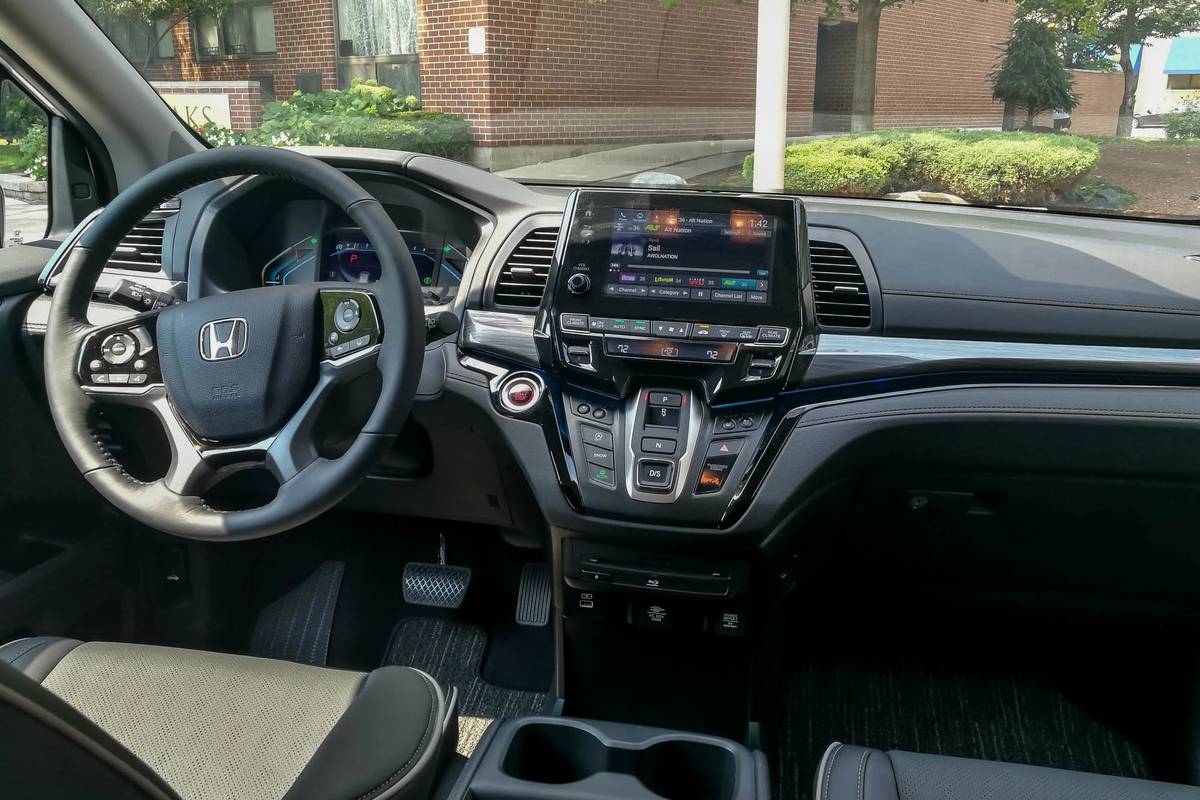 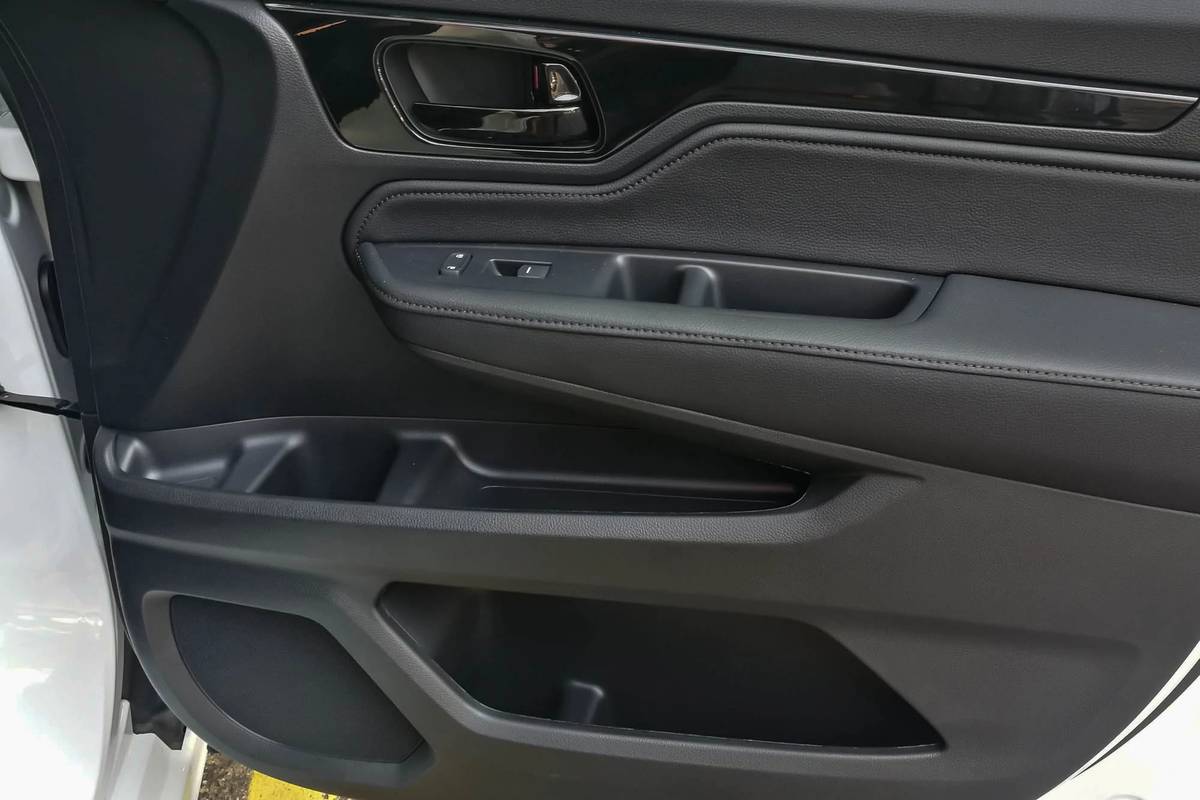 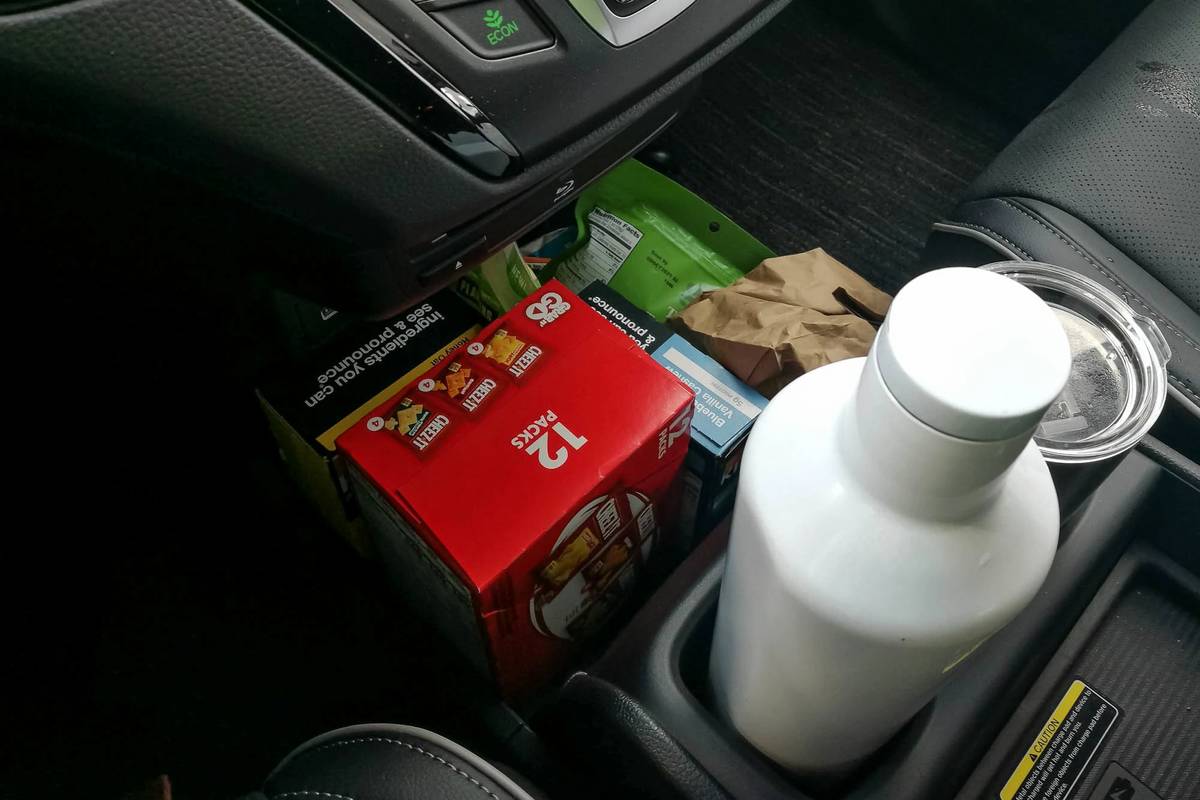 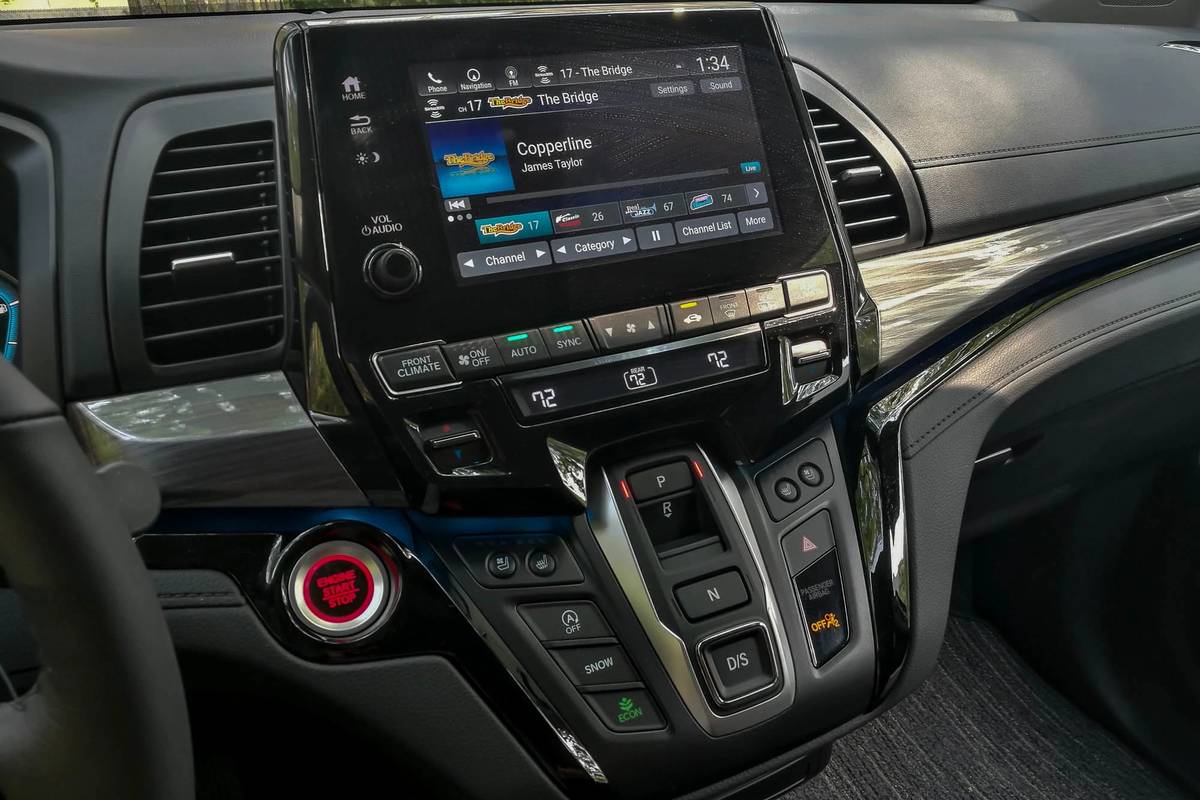 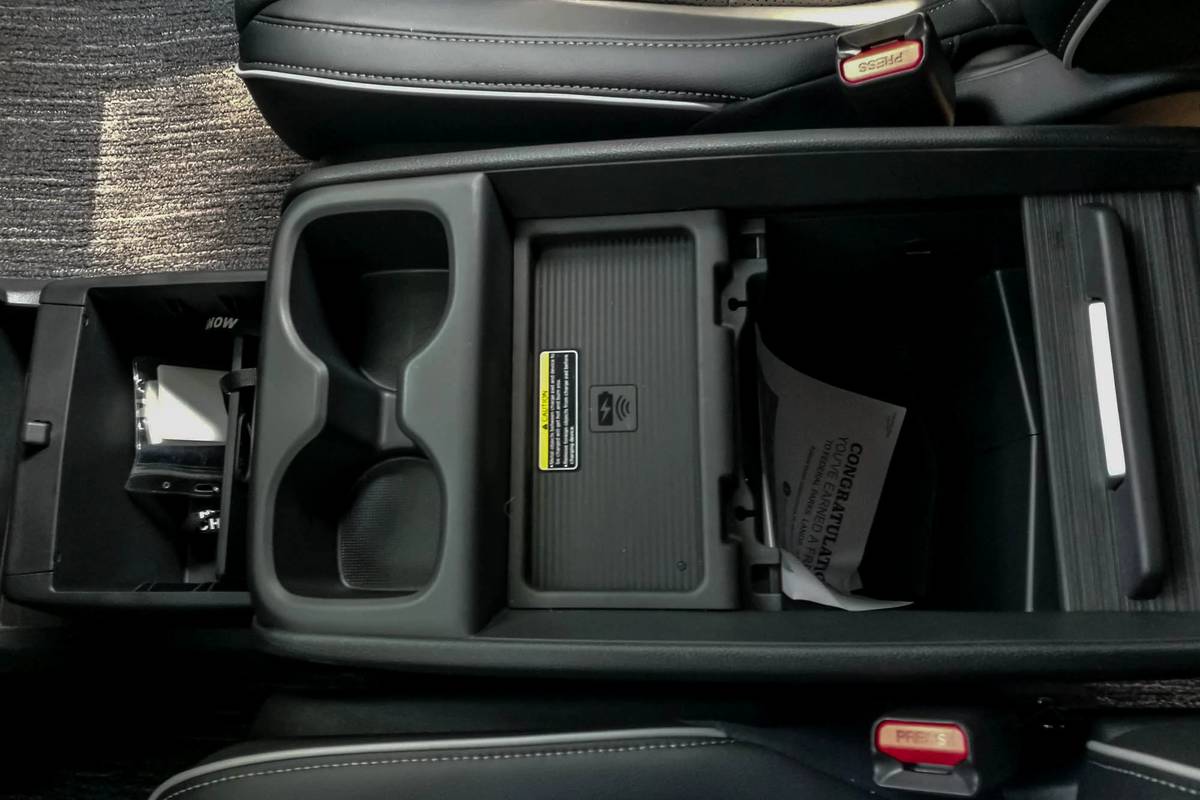 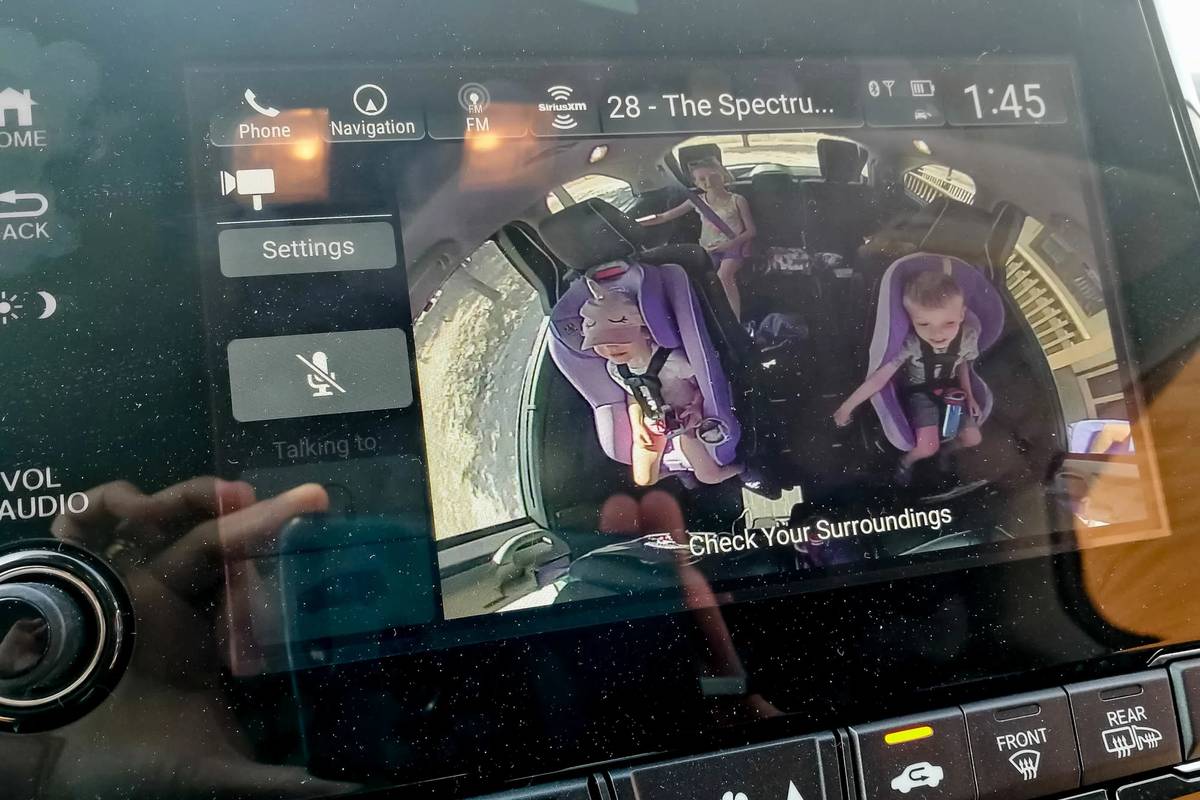 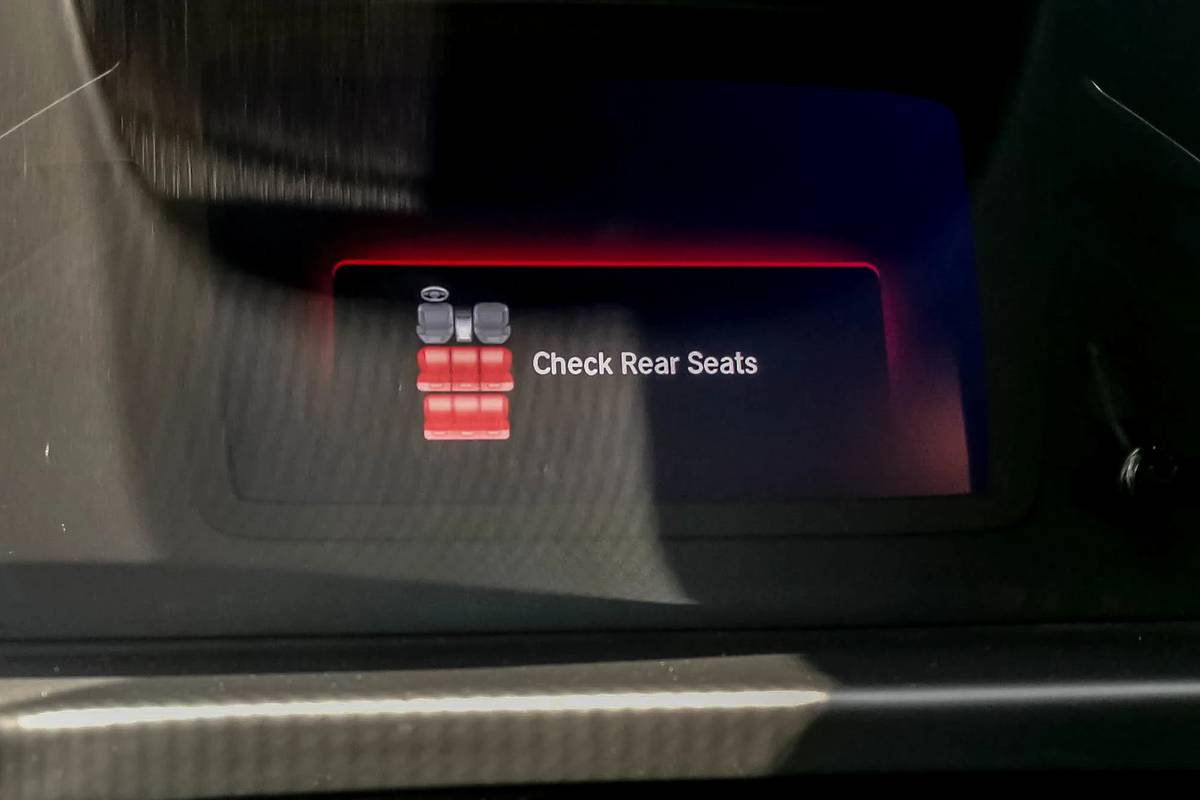 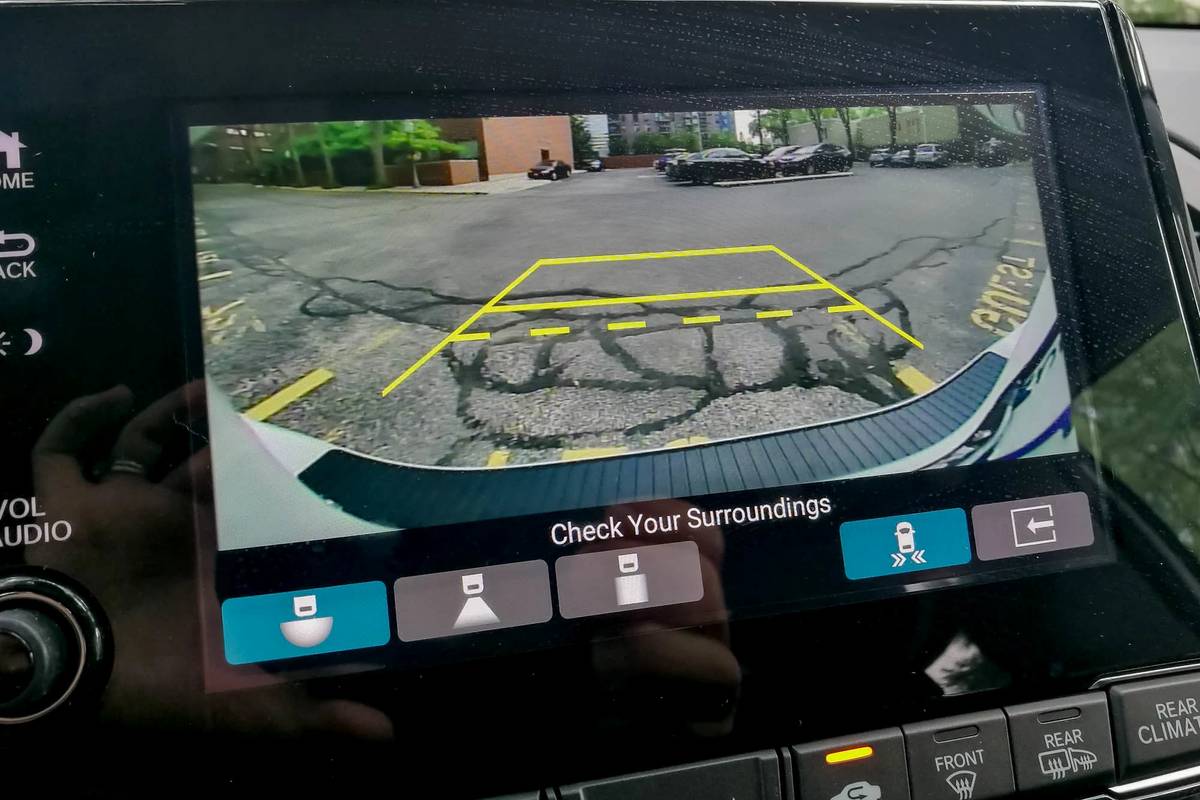 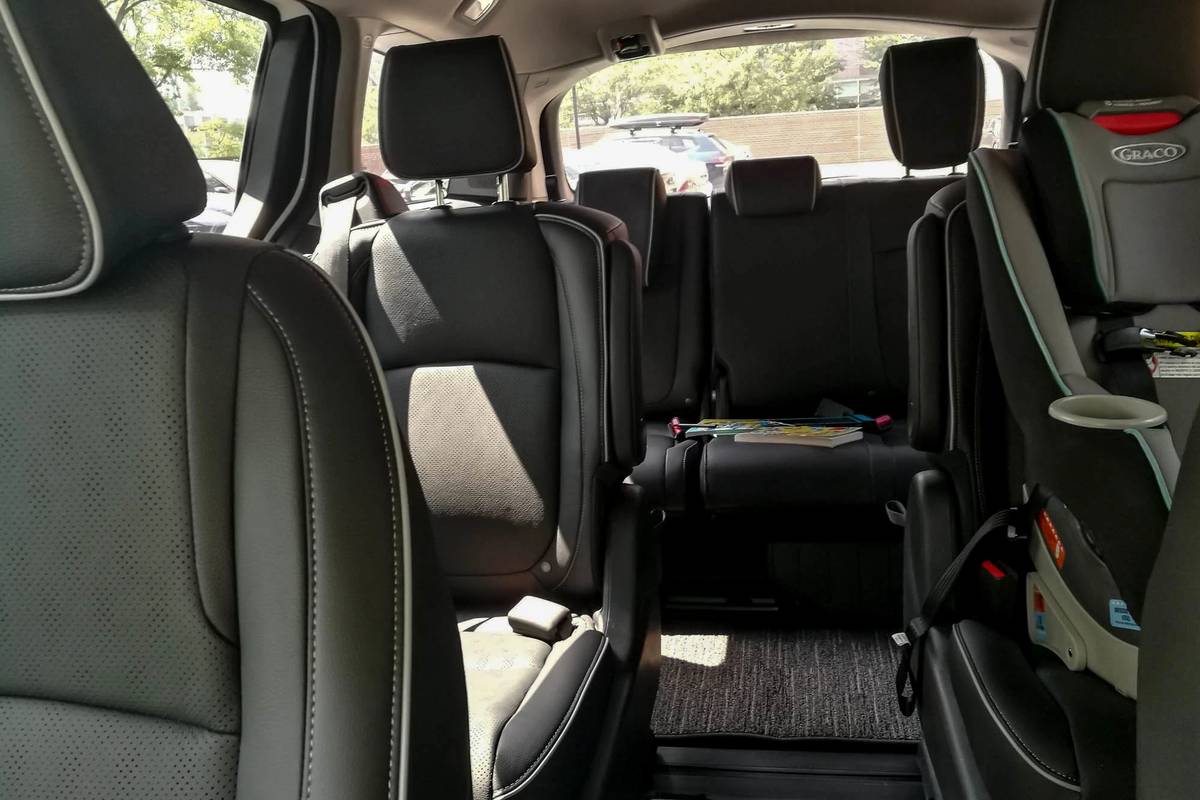 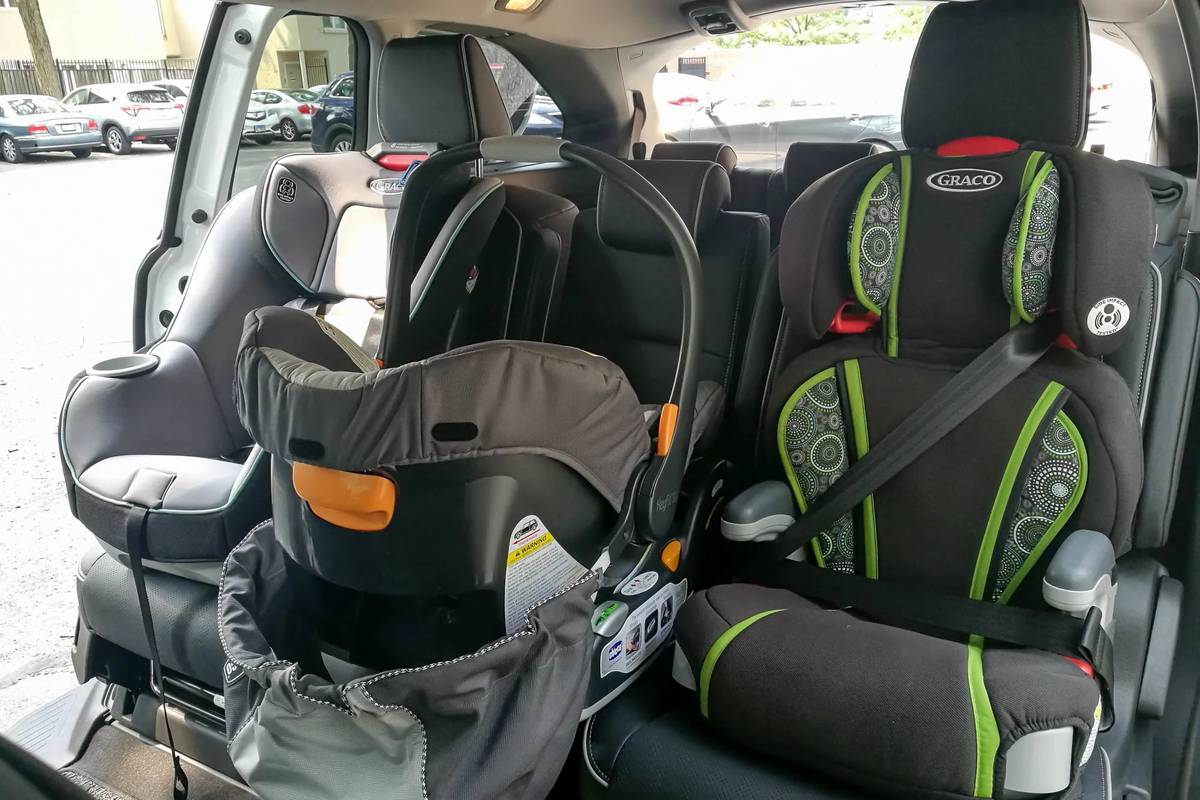 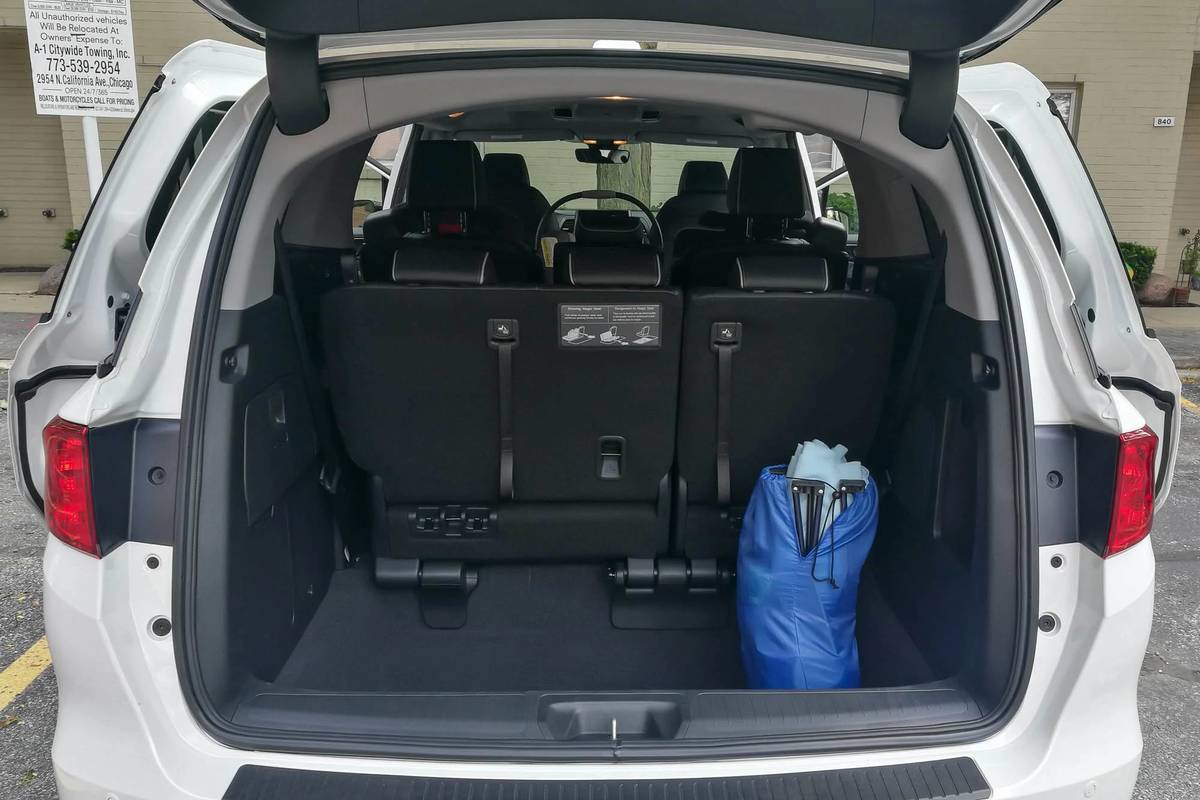 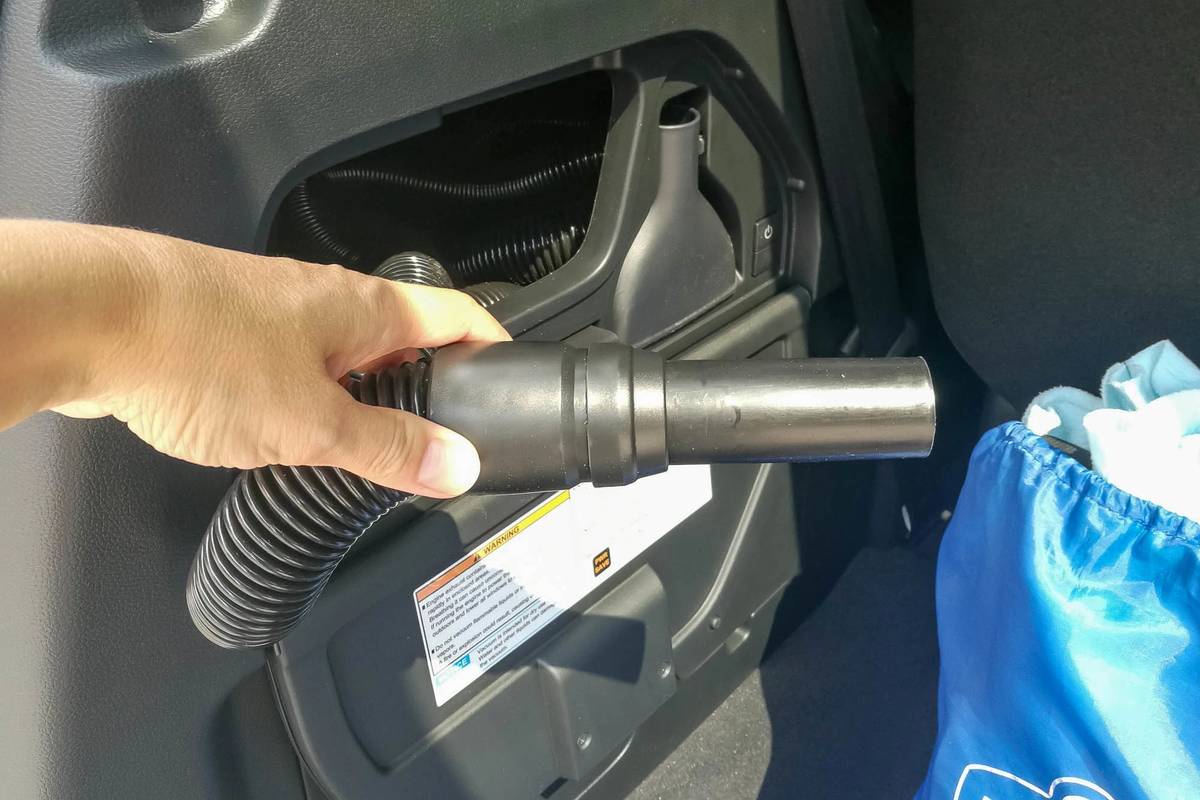 The verdict: Traveling with multiple kids presents a decent amount of challenges, and the 2021 Honda Odyssey minivan offers a host of solutions designed to help keep parents comfortable and kids from mutinying.

Versus the competition: The Odyssey’s creature comforts impress, from its Magic Slide second row and versatile rear entertainment system to its CabinWatch camera display and HondaVac vacuum, but other minivans, such as the hybrid-only 2021 Toyota Sienna and plug-in-hybrid version of the 2021 Chrysler Pacifica, offer more fuel economy solutions.

For the 2021 model year, the Odyssey gets some mild exterior styling tweaks, upgraded materials for the luxury-inspired top trim level and some additional standard safety features. In addition to the Pacifica and Sienna, it also competes against the Kia Sedona. See them compared.

My family of five took the Odyssey on, well, an odyssey: a road trip from Chicago to South Dakota. Over 2,000-plus miles, it was the best behaved member of the trip, delivering a comfortable ride and ample power.

The sole powertrain is a 280-horsepower, 3.5-liter V-6 engine and 10-speed automatic transmission. The pair seamlessly delivered what was needed both around town and on the highway; shifts were well timed and subtle, and the Odyssey rarely felt underpowered despite a hefty load of people and gear. When pushed, it tended to complain loudly, but it quieted down nicely for a quiet, well-isolated ride overall.

The van is EPA rated 19/28/22 mpg city/highway/combined, and that fits with my trip’s mileage. I averaged 26 mpg, most of it highway driving and some of it in Eco mode, which alters accelerator response and transmission tuning to save fuel. The mode is not for everyone, however: Acceleration response goes from prompt to poky and you feel every bit of the van’s 4,000-plus pounds off the line.

The Odyssey matches the Pacifica’s EPA combined rating with front-wheel drive. Chrysler added optional all-wheel drive for 2020, which lowers mileage to 17/25/20 mpg (the Odyssey comes only with FWD). The Kia Sedona is rated a bit lower than the Odyssey at 18/24/21 mpg.  The Toyota Sienna, meanwhile, is in a totally different fuel economy class: For 2021, it comes only as a hybrid and Toyota estimates the van will get 33 mpg combined (the current V-6-powered Sienna gets an EPA-estimated 21 mpg combined with FWD). Chrysler also offers a higher-mileage model with the Pacifica Hybrid, which gets an EPA rating of 82 mpg-equivalent on electricity and gas, but note that the Pacifica Hybrid is a plug-in hybrid with an electric-only range of up to 32 miles, so mpg-e is not an apples-to-apples comparison with the Sienna hybrid. Once the battery charge is depleted, it’s EPA-rated at 30 mpg combined.

Comfort comes through in terms of the Odyssey’s ride and handling, as well, but it could be better. As large, long vehicles, there’s a certain degree of clumsiness inherent in minivans, but the Odyssey’s engineers have done a decent job. Overall, the suspension has a controlled feel; body motion over bumps is well checked and lean in corners is manageable. I find the Pacifica’s ride more composed and athletic, but the Odyssey never felt sloppy.

Screen time is the first of two secrets to a happy road trip, and all three rows had ample access to entertainment. In front, Honda’s Display Audio multimedia system — standard on all but the base Odyssey — is a breeze to use: It’s responsive, has clear icons and an intuitive menu structure. It connects seamlessly with Apple CarPlay and Android Auto via a USB cord. The system is good but still lacks a tuning knob, and my love for Chrysler’s Uconnect system (which is getting an update and will be on the 2021 Pacifica) runs deep. For 2021, Uconnect gets wireless CarPlay and Android Auto connectivity.

Honda’s system also works with the available CabinTalk and CabinWatch features, which help you keep an eye on and talk to rear passengers. They have been integrated for 2021 and can now be opened via one menu and used simultaneously.

I’m a fan of CabinWatch, but CabinTalk felt gimmicky. The former uses a camera to show front-seat occupants the back passengers, day or night, on the Display Audio screen. It’s a useful way to quickly check up on the kids in the rear without stealing too much focus from the road. The CabinTalk system projects the driver’s voice to the second and third rows, but the sound is weird and echoey. I didn’t feel the need to use it very much (and my kids found it creepy).

For the second and third rows, the Odyssey has an available rear DVD/Blu-ray entertainment system with a large, ceiling-mounted screen, and it put in a lot of overtime during the trip. But wait: Who even has DVDs anymore? Well, I dusted off some oldies and when those ran out, I connected to the car’s Wi-Fi (monthly service available for a fee), downloaded new movies to my tablet and then connected it to the system via the HDMI port.

How do you get two 6-year-olds and a 10-year-old to agree on a movie? Trick question! When my fifth grader in the third row wasn’t happy, she instead was able to watch her shows on her tablet — thanks again, Wi-Fi — and keep it charged via plenty of USB ports peppered throughout the cabin. This setup provided whine- and drama-free hours of entertainment for the kids, but I think the Pacifica’s Uconnect twin touchscreen rear entertainment system has a slight edge: Its neat apps and dual-screen versatility were a big hit with my kids on a previous road trip.

The second secret is to stash plenty of snacks — and again, the Odyssey answered the call with oodles of multi-kid, multi-snack-friendly nooks and cubbies. Favorites include the huge center console as well as the open space ahead of it that’s useful for holding a large purse or bag (of snacks).

It’s no slouch when it comes to room for people too and can comfortably (and easily) hold five child-safety seats. On all but the base trim, the second row’s center seat is removable. When it’s in place, the Odyssey has five sets of Latch anchors: three in the second row and two in the third. They’re all exposed and easy to use, and there’s ample space for five car seats.

Taking the middle seat out of the second row enables one of the van’s most useful features: Magic Slide. After it’s removed, the outboard seats can slide side to side and forward and back into various positions. The system proved helpful in two ways: I quickly and easily moved both seats to one side to create a large pathway to the third row so my fifth grader could get back there without an awkward shimmy past my younger twins’ car seats. Also, when the twins got on each other’s (and everyone else’s) nerves, I slid them to each side of the van, leaving a lot of space — and peace — in between.

If I need the van to carry big stuff, however, things get complicated. The Honda Odyssey’s second row can’t match the storage advantages of the Pacifica’s Stow ‘n Go seating system. Where those seats tumble into underfloor bins (which otherwise serve as voluminous storage spaces), the Odyssey’s second-row seats must be removed; they’re heavy and need to be stashed somewhere. Previously, they didn’t fold at all, but they do for 2021.

The magic returns for the third row, however. The 60/40-split, folding third row is among the easiest I’ve used. One tug of a strap folds the seats down into the floor, creating a flat cargo area. The system is spring-loaded and the head restraints can remain in the seats.

With all those snacks, messes are sure to mount — but not for long. Cleaning up the crumbs is no sweat with the built-in vacuum nestled into the side of the cargo area; its hose reaches all three rows. Lastly, the Odyssey’s cargo management is further improved for 2021 with new grocery bag hooks on the back of the third-row seats.

For 2021, the Honda Sensing suite of advanced electronic safety features is now standard across the Odyssey lineup (it was previously available only on EX and higher trim levels). It includes features such as automatic emergency braking with pedestrian detection, traffic sign recognition, lane departure warning, lane keep assist and adaptive cruise control with low-speed follow, which worked seamlessly during my drive.

New for 2021 is a standard rear-seat reminder system that warns drivers to check the rear seats before exiting the van; warnings come via an audible chime and a warning message displayed on the instrument cluster. In uplevel Touring and Elite trims, it works with the CabinWatch camera system to display an image of the rear seats (and what you may have left in them).

Keeping everyone happy mile after mile in a van brimming with people and stuff is a tall order. The 2021 Odyssey proved it was up to the task and answered back with its long list of convenience features, comfortable road manners and creative use of space.