The verdict: The 2021 Land Rover Discovery three-row SUV sits between the super-luxurious Range Rover and the rugged Defender in the automaker’s lineup and offers a little bit of both worlds, with a premium interior and loads of off-road capabilities — but forget the third row; it’s teeny and steals nearly all the cargo space.

Versus the competition: A multimedia update for 2021 keeps the Discovery modern and competitive, but others in the class have human-sized third rows and more cargo space.

The Discovery competes against the likes of the Audi Q7, Acura MDX and Volvo XC90. See them compared. I tested the R Dynamic S — one of three available trim levels — equipped with the stronger of the SUV’s two engines, labeled the P360.

For 2021, the Discovery got a slight update to its exterior, along with a new multimedia system and a revised engine lineup. Compare it with the 2020 model. 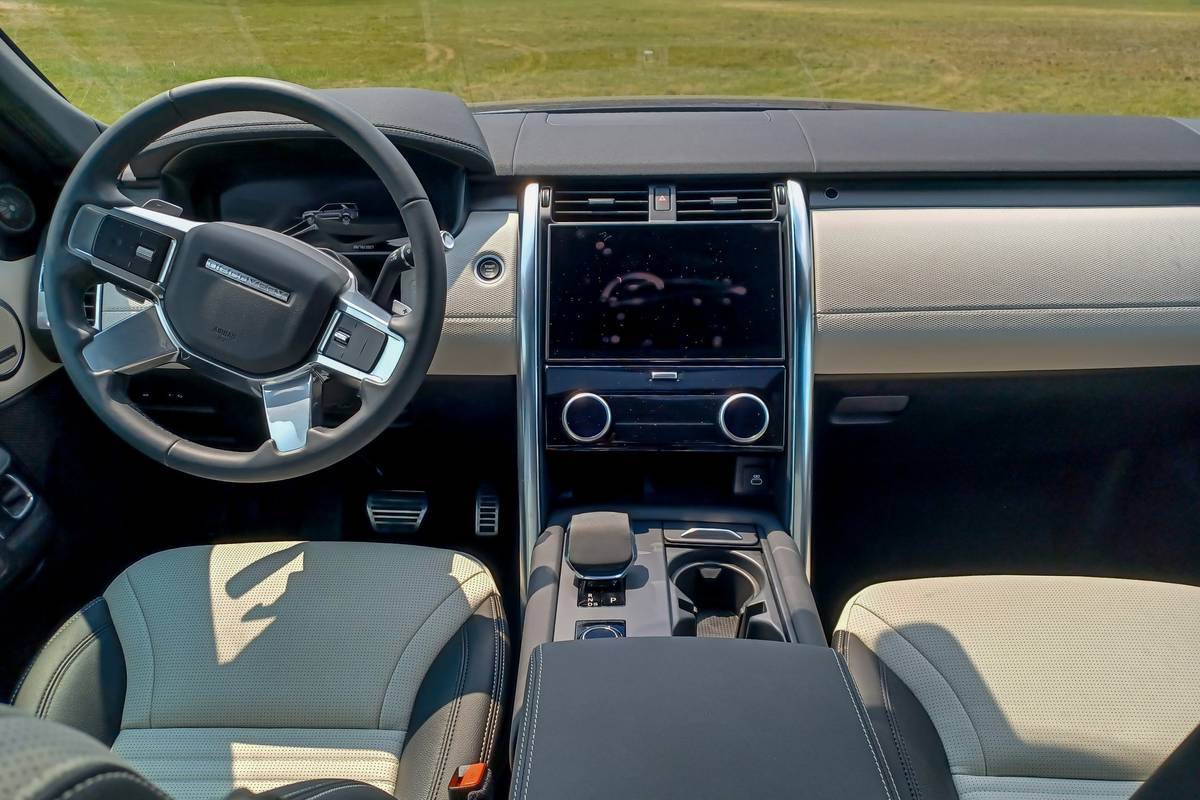 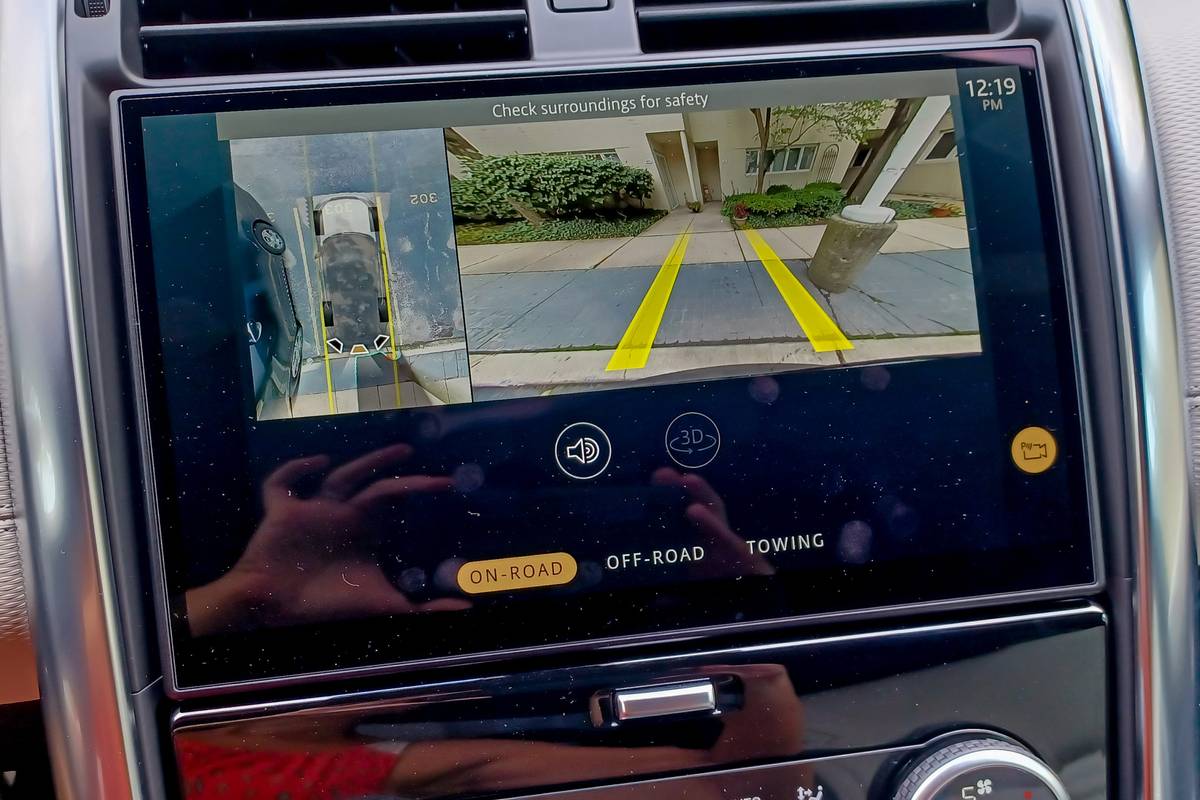 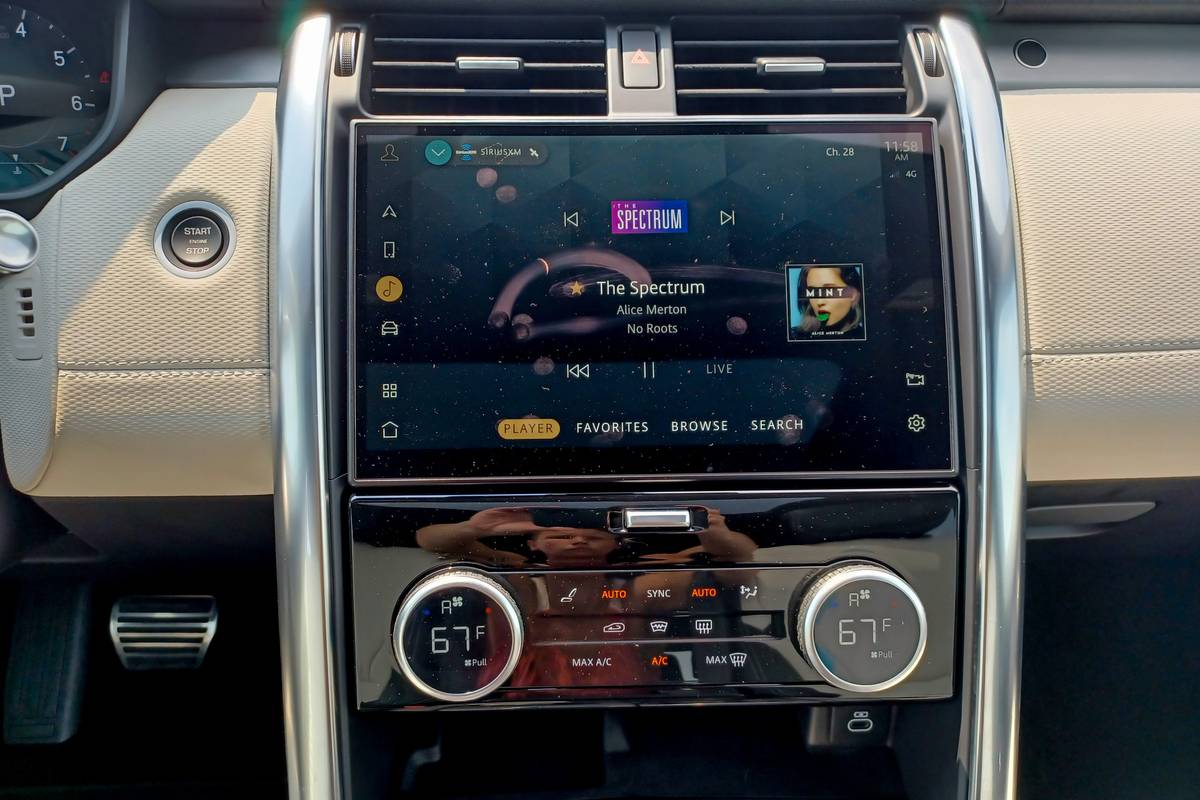 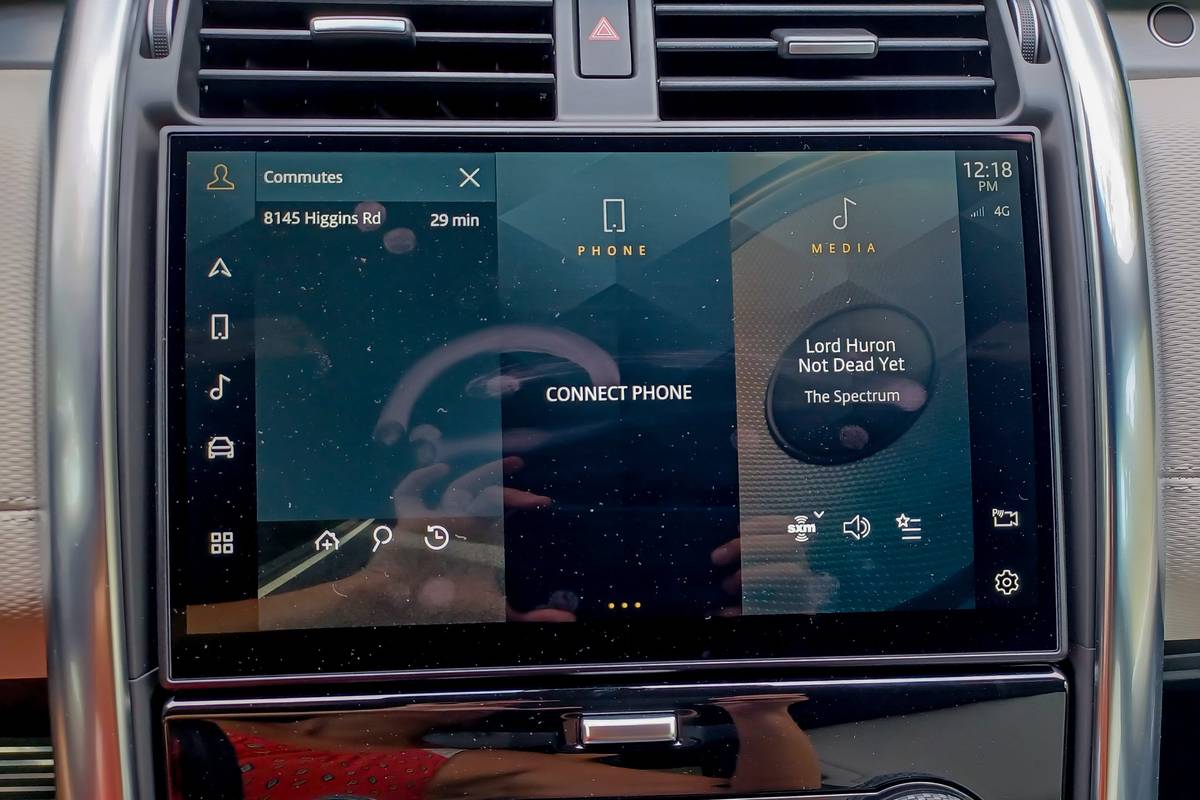 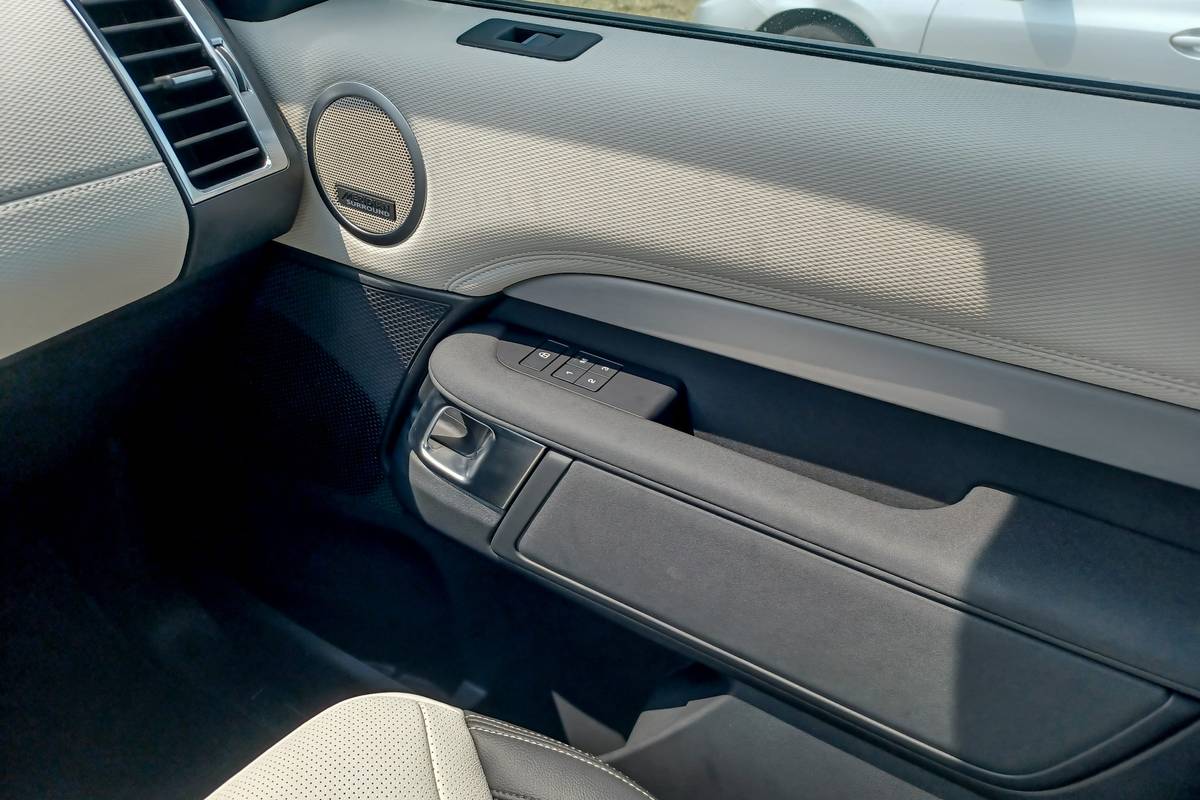 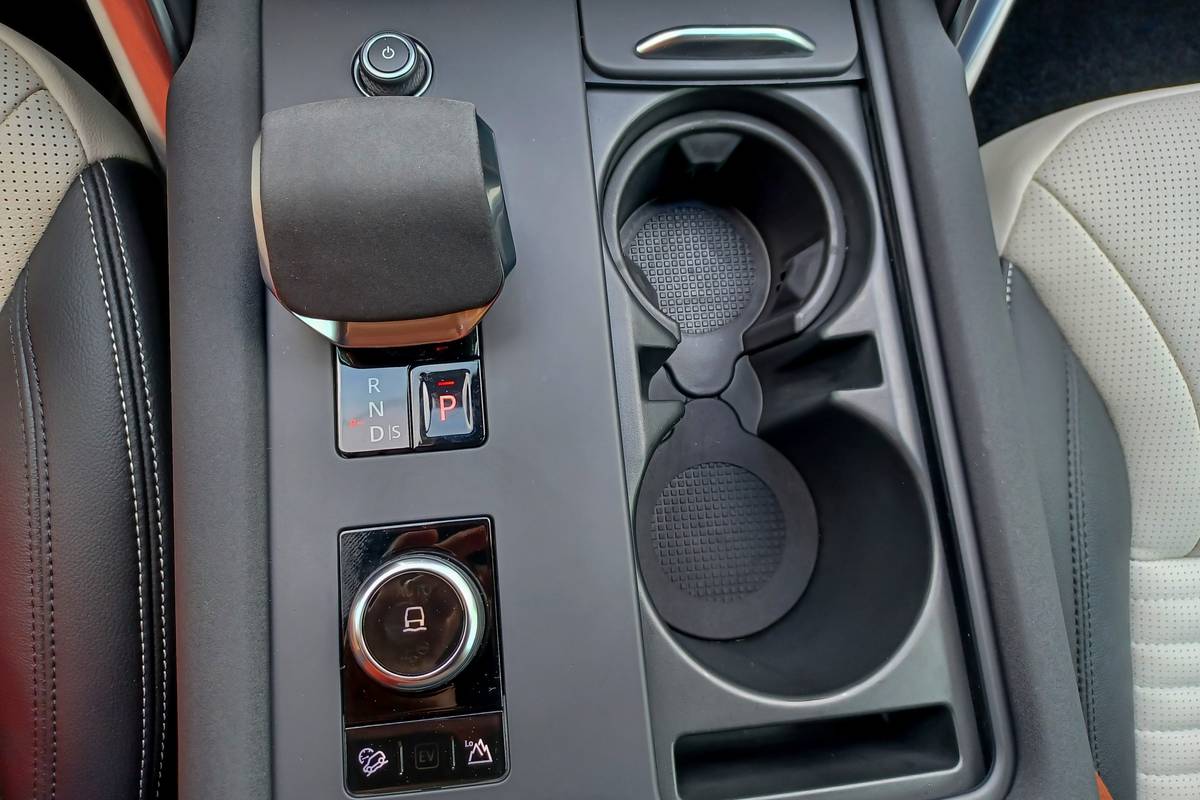 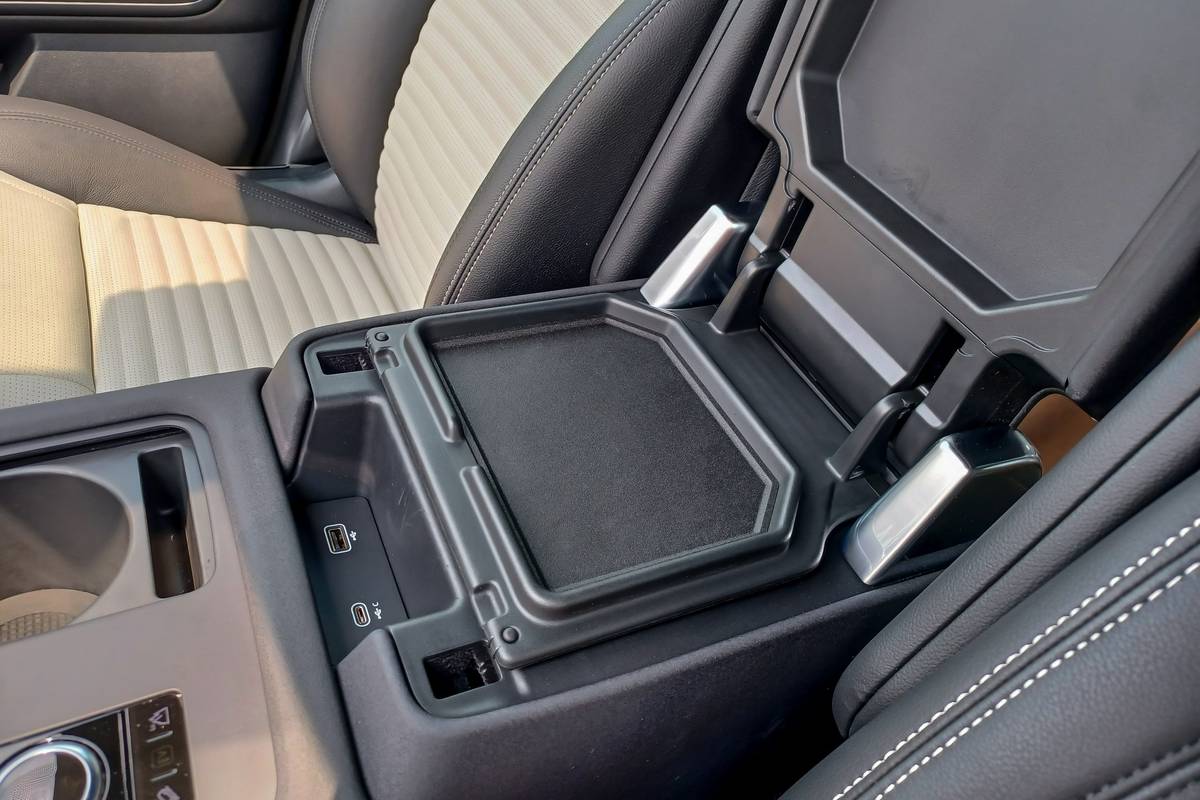 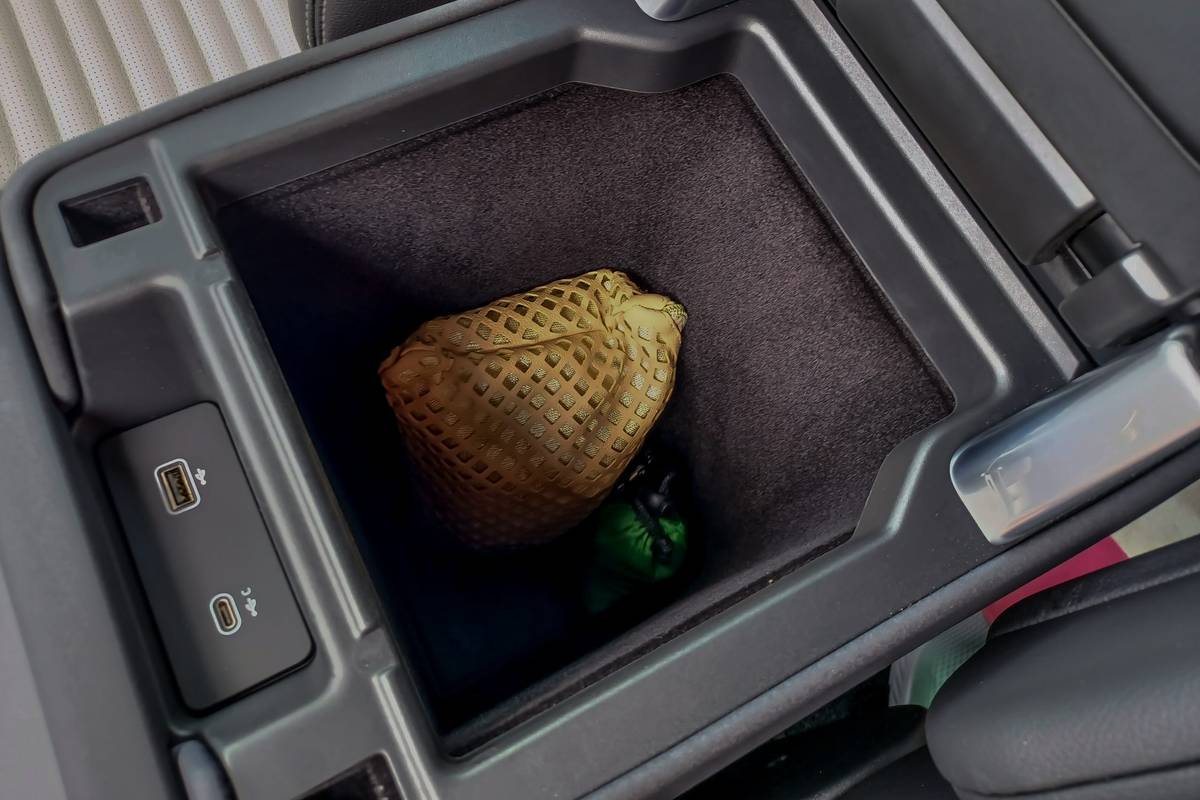 The cabin’s streamlined, no-nonsense design and premium materials combine for a lovely look and feel. Highlights include my test car’s rich leather seating, with surfaces in a Light Oyster and Ebony color palette. The cabin has very little bling, but rather than boring, it presents as understated. There are some new features in the cabin this year, and I’m mixed on a couple of them.

First, a large, 11.4-inch multimedia system sits in a great place on the dash for easy visibility and usability. It has large icons, crisp graphics and an easy menu structure. My problem with it, though, is its response time: The system is slow to engage or switch tasks, and connecting to Android Auto took many seconds longer than I’ve experienced in other vehicles. Lastly, the volume knob is in an awkward spot ahead of the shifter, and there’s no tuning knob.

The climate controls below the screen are also needlessly complicated. You can push, pull or spin the main dials depending on what you need to do. For example, you push the dial to turn up the heated seats, pull the dial to adjust the fan speed and spin the dial to turn up the temperature. Pressing the buttons next to the dials takes more force than in any vehicle I’ve ever been in; you have to really lean into the buttons to make something happen. Many functions can also be done via the touchscreen, but navigating to the climate menu takes too many steps.

I had better luck using Land Rover’s voice recognition system, which can control some of the car’s media, navigation, phone and climate functions. I found it fairly accurate and less annoying than some of the regular controls.

Other new highlights for the cabin are a 12.3-inch digital gauge display and a full-color head-up display ahead of the driver, both of which are helpful additions. 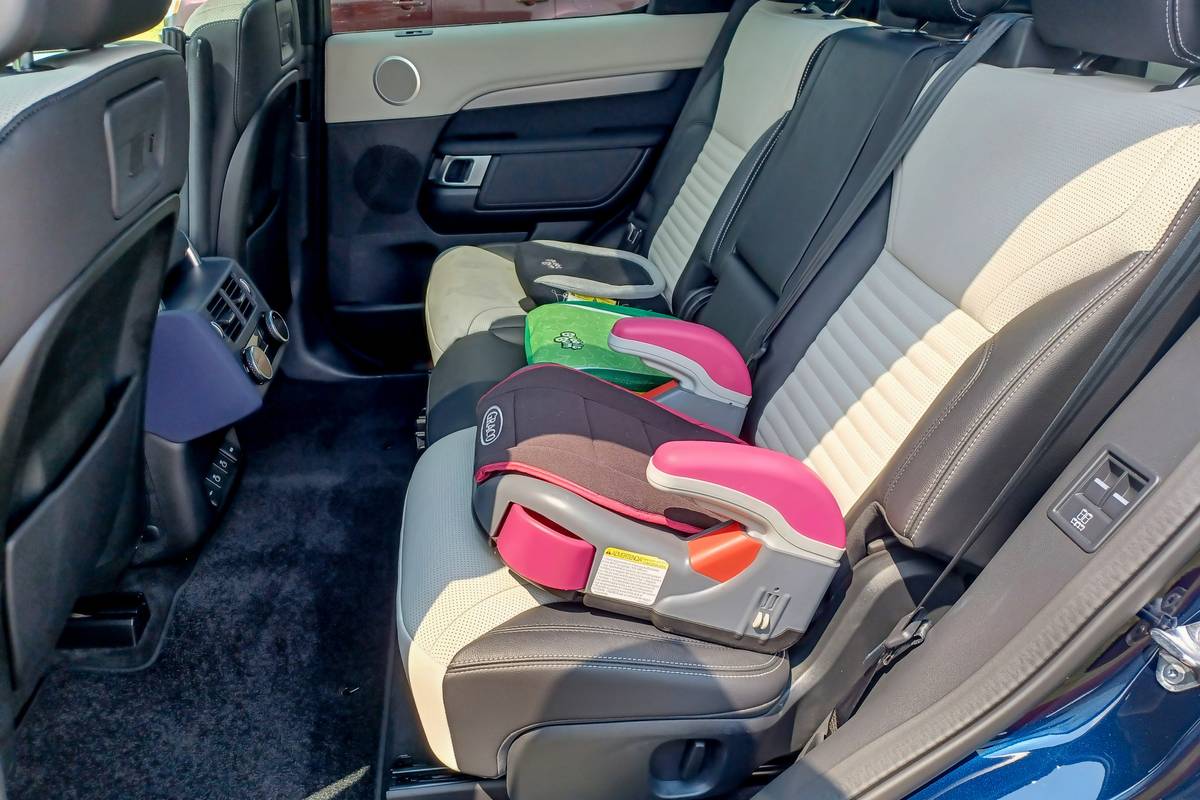 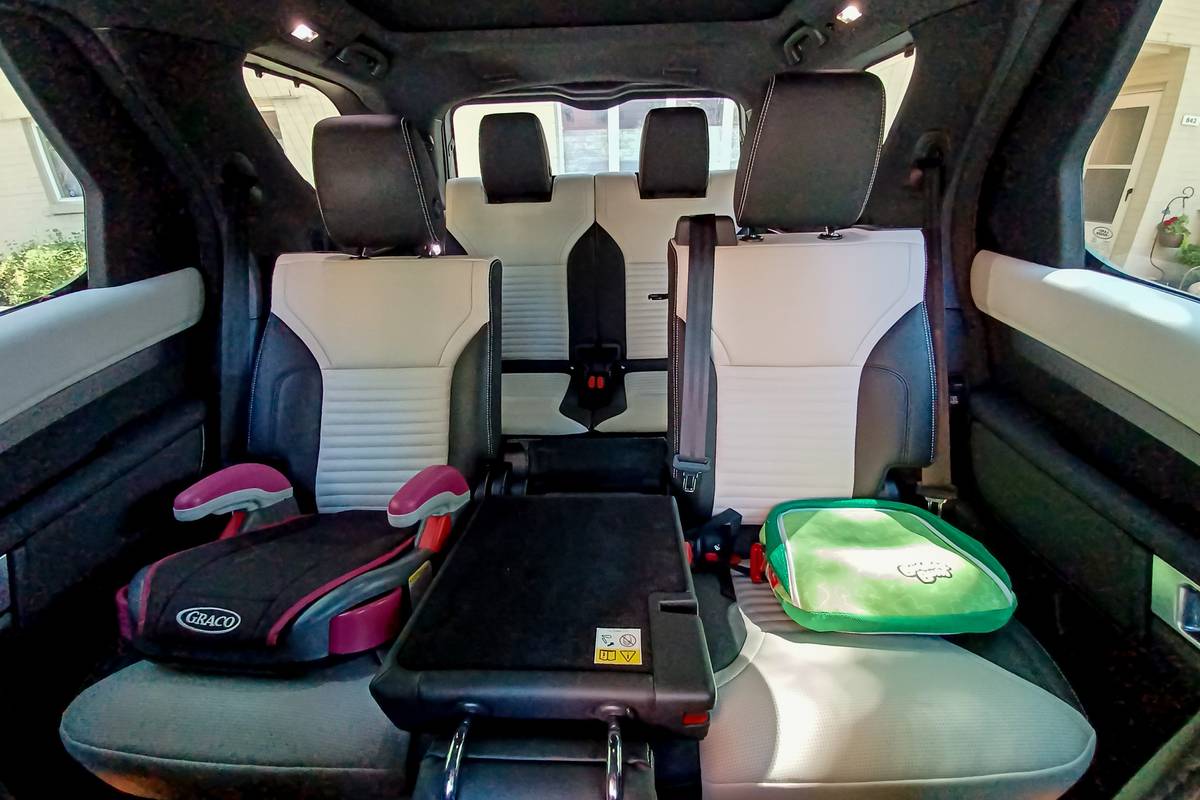 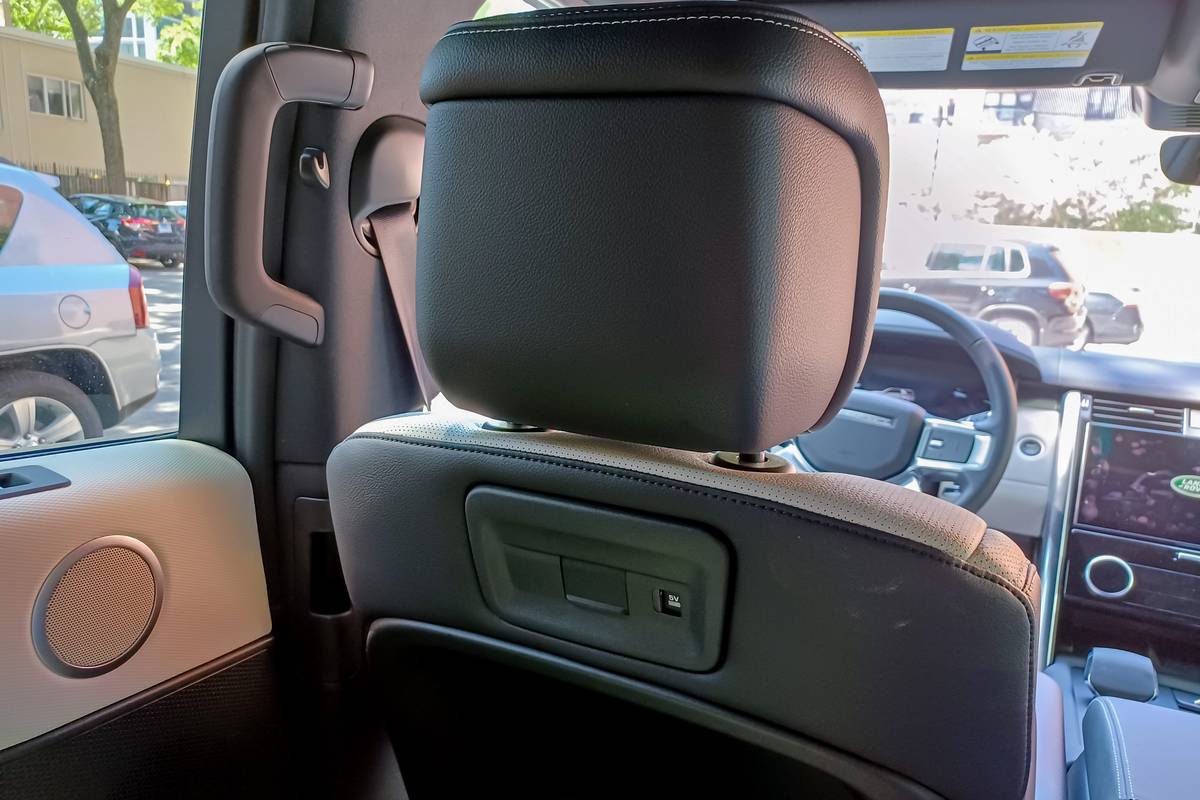 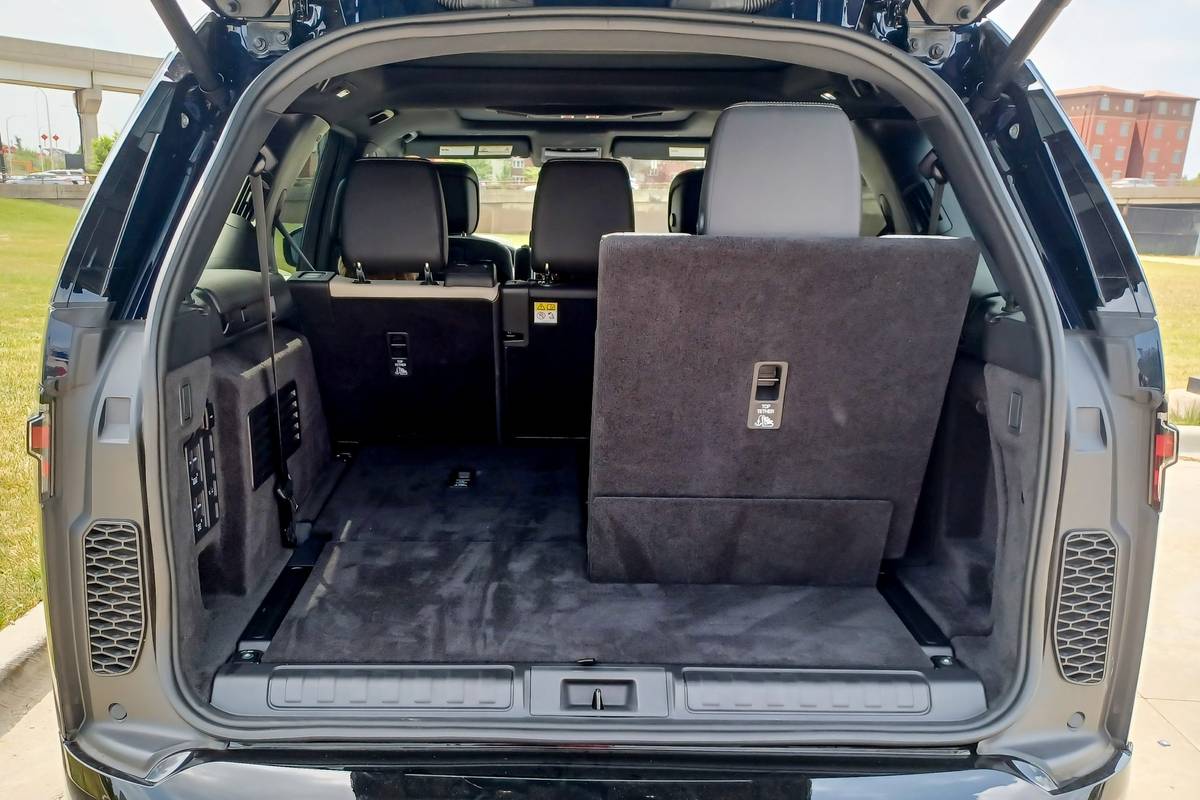 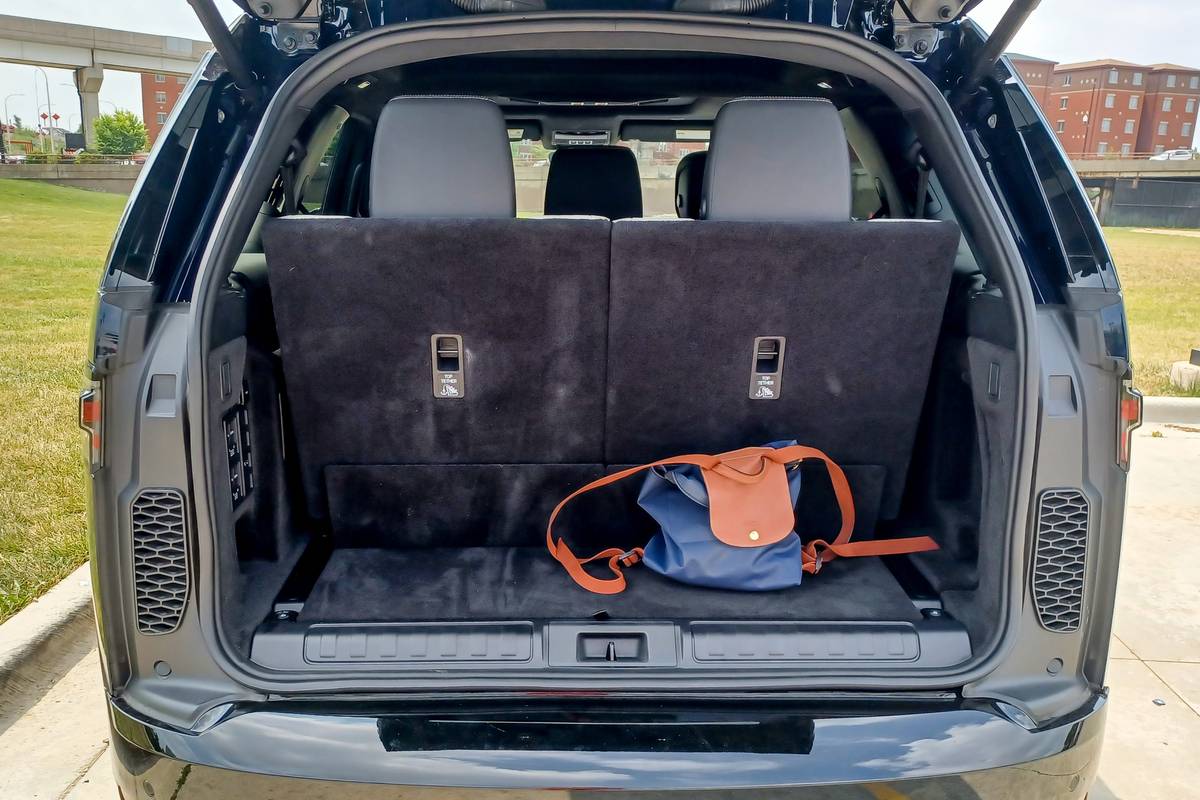 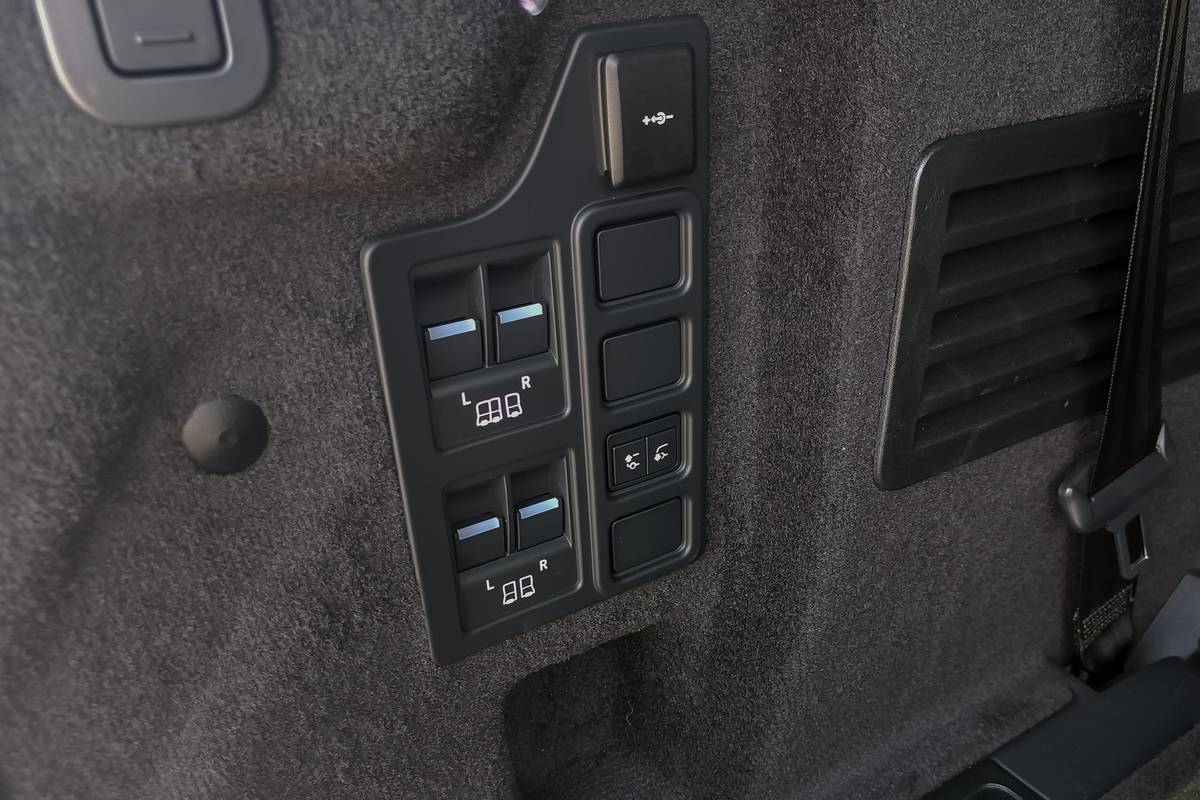 Land Rover says it added more padding to the second-row seats for 2021, and they’re properly comfy. Headroom and legroom are great for a couple of adults, but a bench seat is the only configuration. Some competitors, such as the Acura MDX and Volvo XC90, offer captain’s chairs for the second row.

The second row also does well when it comes to kids — two car seats fit with ease thanks to exposed lower Latch anchors and accessible top tether anchors. Only two of Cars.com’s car seats fit on the bench, but we were really close to being able to fit three car seats. Narrower car seats could probably do it. Read our full Car Seat Check for more.

Kids will appreciate the nine available USB ports peppered throughout the cabin, as well as the SUV’s available Click and Go tablet holders, which are incorporated into the front seatbacks. Click and Go accessories are available for purchase at Land Rover retailers and include several different tablet holders designed to accommodate a variety of devices. There’s also an available folding table, coat hanger and hook; these accessories range from around $60 to $175 each. The tablet system coordinates well with the Discovery’s available onboard 4G Wi-Fi hot spot, which is capable of linking up to eight devices.

Things are less rosy when you head to the third row, starting with getting back there: Moving the seats to climb into the third row is a slow process, carried out via buttons on the sides of the seats. The opening they make is small, and the step-in height is pretty tall for smaller kids to manage on their own. The second row is split 40/20/40, but folding the middle seat makes for an awkward stumble over it to get to the third row.

Once you’re in the third row, headroom is fine but legroom is quite tight — even for kids. The seats are very firm, and the windows are so small it feels like a cave back there. I would be reluctant to use it regularly, even for kids; it’s uncomfortable and a pain to get into.

At least there are a lot of amenities back there. Each occupant gets a cupholder, a small storage bin and a USB port — all must-haves for when my kids are in the third row. There are also Latch anchors for car seats — though again, maneuvering car seats in the wayback requires a combination of muscle and Tetris skills. Once installed, legroom for kids in car seats will still be a problem.

The other problem with the third row is how much it eats into cargo space. When both seats are in use, there’s room for only one large grocery bag behind them, or two smaller ones. Based on Cars.com’s measurements, the Discovery has just 4.6 cubic feet of volume behind the third row — much less than the MDX’s 11. 2 cubic feet. We have yet to measure the competitors cited, but it’s noteworthy that the volume behind the Discovery’s third row is less than that of the comparable-length 2021 Genesis GV80 (6.8 cubic feet) and the longer 2021 Jeep Grand Cherokee L (10.9) and 2021 Lincoln Aviator (10.5).

This is a deal breaker. If fitting my family of five into three rows means I can’t fit anything else, the Discovery won’t work. Its standard adjustable air suspension is nice, however; it lowers the cargo area’s liftover height for loading big items. 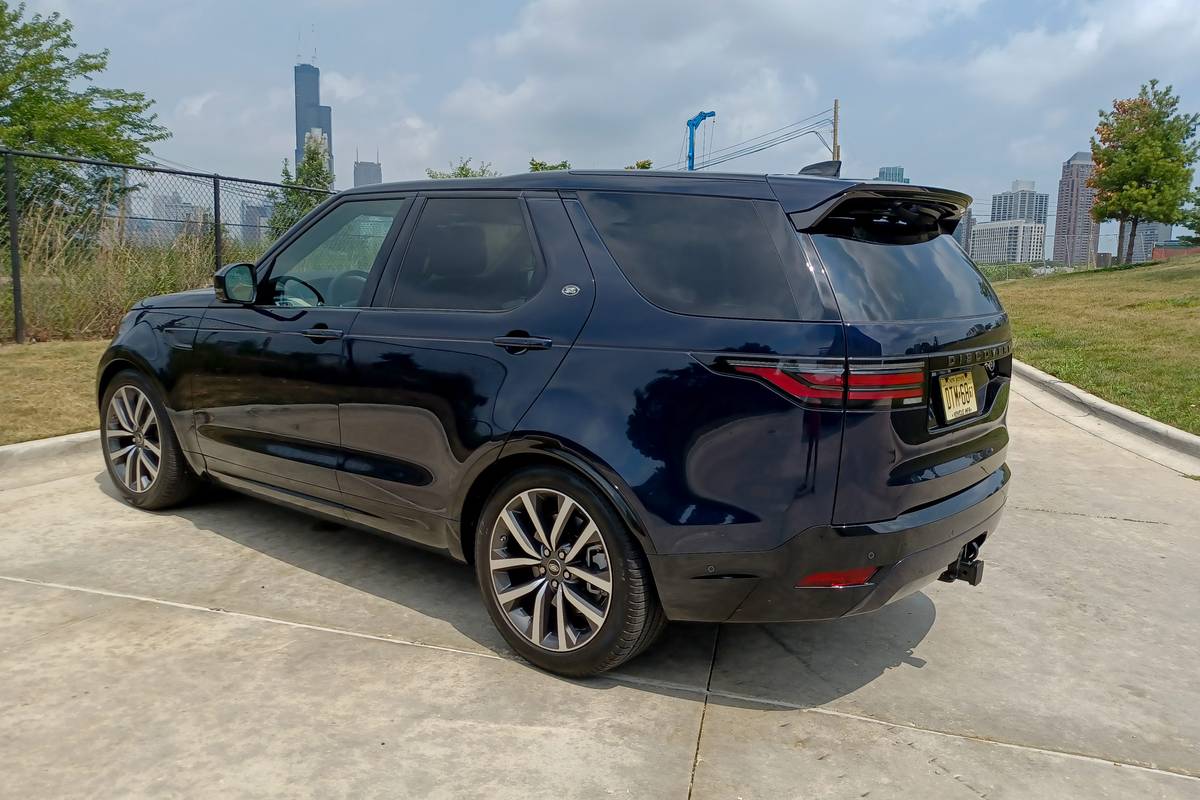 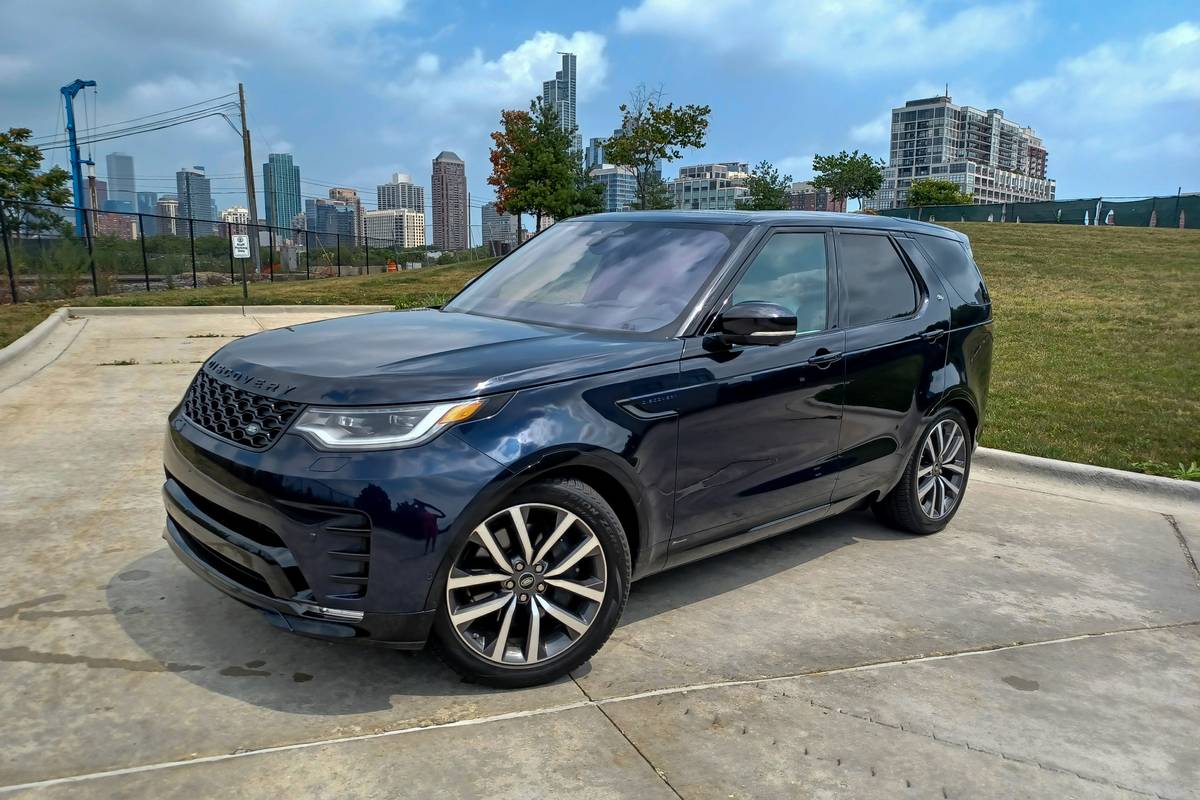 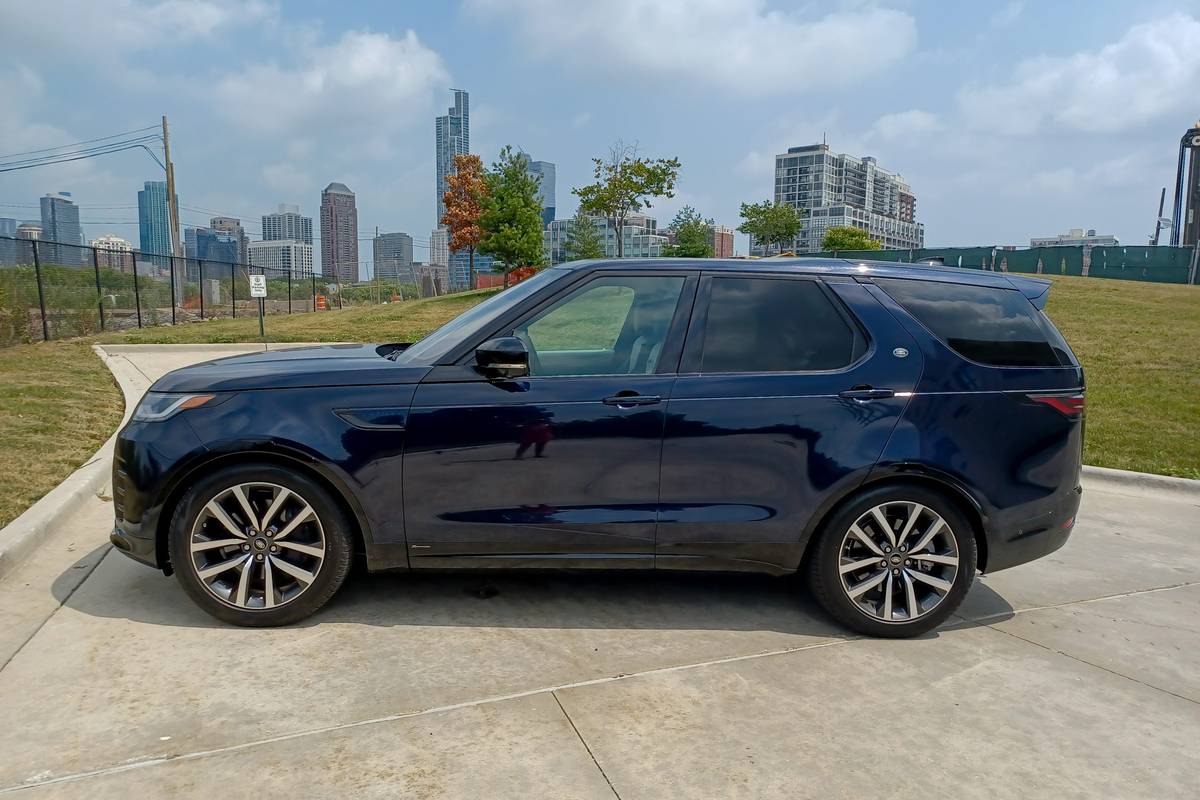 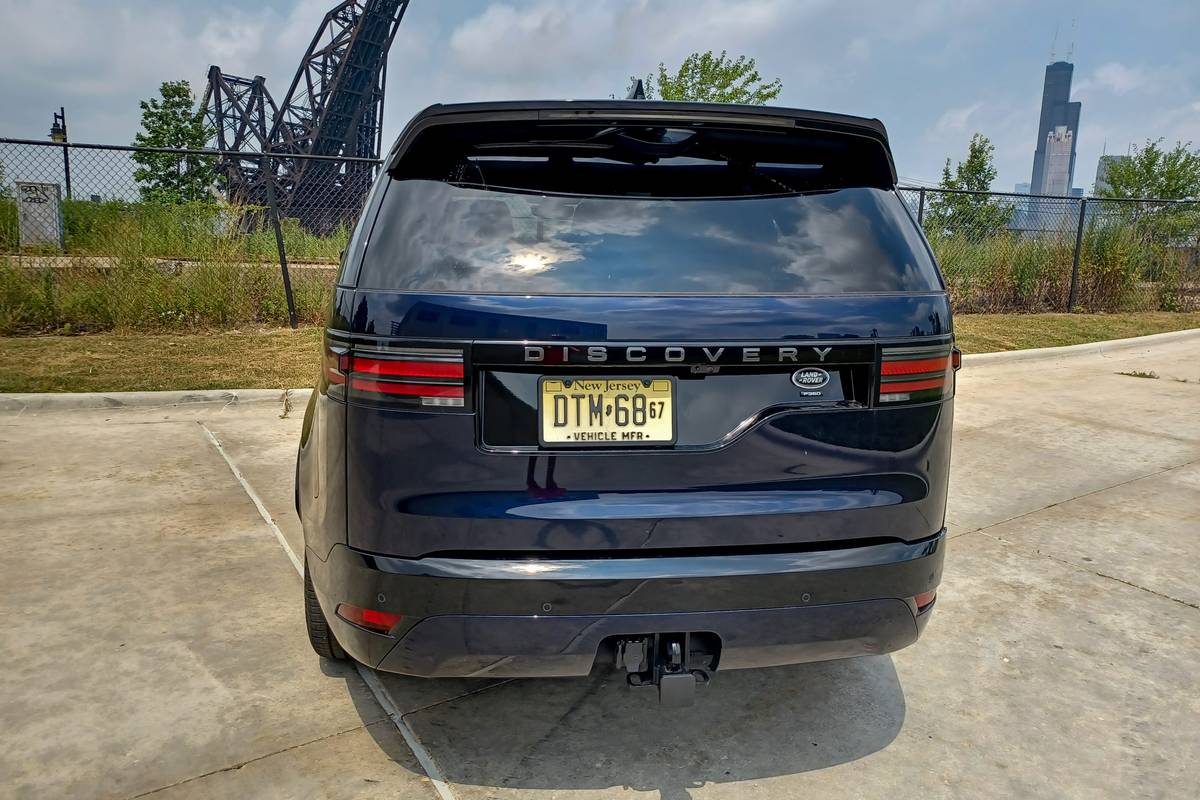 The Discovery’s smooth exterior styling and posh cabin are a good match for its polished powertrain. Two new turbocharged engines are available for 2021: a 296-horsepower four-cylinder (the P300) and a 355-hp six-cylinder; the diesel has been canceled.

I tested the six-cylinder, which roars to life with a throaty, mean exhaust note, but it doesn’t provide quite as much gusto as it sounds. After a brief lag, acceleration is strong from a stop and adequate on the highway.

The eight-speed automatic transmission quickly and smoothly delivers more power when called upon, but it becomes less adept and more awkward on deceleration, where shifts lag and feel clunkier.

On the road, the Discovery has a solid, stout presence, but handling occasionally feels clumsy — like in corners where there’s a lot of body lean. It’s not agile by any means, and you’ll never forget that you’re driving a tall, heavy vehicle, but it’s comfortable overall. Composure is good over bumps, likely thanks in part to the standard air suspension.

Where it shines — I’d imagine — is off-road. I tested it only on pavement, but the Discovery’s long list of off-road goodies is impressive. Aside from standard all-wheel drive, there’s also the Terrain Response 2 system with adventure-ready modes such as Grass/Gravel/Snow, Mud Ruts, Sand and Rock Crawl. There’s also a new Wade mode for crossing rivers that uses the Discovery’s 35.4-inch wading depth capability. A locking rear differential is also available, and a two-speed transfer case is standard on six-cylinder models but isn’t offered with the four-cylinder engine.

While the Discovery bests competitors in terms of off-road ability, it lags others in eco-friendliness, with a mediocre EPA rating of 18/24/21 city/highway/combined mpg with the six-cylinder engine. That’s similar to the V6 MDX AWD’s 19/26/22 mpg rating.

The Discovery’s six-cylinder engine is classified as a mild hybrid by the EPA — a 48-volt battery pack augments the engine’s power — but Land Rover doesn’t offer any full alternative-fuel versions of the Discovery. Volvo, meanwhile, has a plug-in Recharge version of the XC90, which is good for 18 miles of electric-only range and 27 mpg combined after the battery is drained. Acura could also do better: The brand canceled the hybrid version of the MDX for the 2022 model year, and there’s no word yet on its return.

The 2021 Land Rover Discovery starts around $55,000 for a base four-cylinder P300 S. My P360 S R-Dynamic six-cylinder version had extras that bumped it to around $73,000. Its base price is similar to the Audi Q7’s but a few thousand dollars higher than the MDX and XC90.

Meanwhile, the MDX offers more standard safety features, such as a Traffic Jam Assist system that enables lane-centering steering down to a stop, as well as traffic sign recognition and a driver attention monitor.

With solid road manners, an inviting cabin and loads of capabilities on roads less traveled, the Discovery does some things well. However, drivers looking for a less fussy control setup and a better balance of people space and cargo room should look elsewhere. The Discovery could leave you holding the bag (probably on your lap).