Many electric SUVs these days are vying for attention with advanced driver-assist tech or muscle-car-worthy power, but what if the key to bringing electric vehicles into the mainstream is simply a matter of making drivers comfortable? Hyundai has introduced the 2022 Ioniq 5 for the U.S. market with the apparent intent to do just that.

Related: 2022 Hyundai Ioniq 5: The Next Tesla Challenger Is Coming

The new all-electric SUV doesn’t match the 3.5-second 0-60-mph time for the quickest editions of the Ford Mustang Mach-E or Tesla Model Y. Instead, Hyundai loads its new EV with practical features like a 300-mile range, quick-charging capability, generous interior space, and a long list of safety and convenience tech to put EV newbies at ease.

The Ioniq 5 will arrive in dealerships in the fall to challenge the Mustang Mach-E and a slate of others: the Volkswagen ID.4, Nissan Ariya, Kia EV6 and whatever the production-intent Toyota bZ4X Concept becomes. Hyundai claims the Model Y isn’t a direct competitor due to its premium badge, but the automaker also says it’s used the vehicle as a reference.

Here’s how the Ioniq 5 stacks up against the current playing field of 2021 model-year compact electric SUVs:

The 2022 Ioniq 5 is powered by a 77.4-kilowatt-hour battery that can pair with either a single electric motor for rear-wheel drive or dual motors for all-wheel drive. The top-tier AWD option gets a combined 320 horsepower and 446 pounds-feet of torque; RWD models get 225 hp and 285 pounds-feet of torque. Hyundai says the AWD Ioniq 5 will hit 0-60 in less than five seconds, and all models will reach a top speed of 115 mph.

Performance Specs Versus the Volkswagen ID.4

The Mustang Mach-E  has standard- and extended-range models, both available with RWD or AWD. The performance-leaning Mach-E GT is available only with AWD. Output ranges from 266 to 480 hp, while the 0-60 mph times range from 6.1 seconds down to as little as 3.5 seconds.

Although Tesla doesn’t give official horsepower or torque numbers for the 2021 Model Y, it says the dual-motor SUV has a 0-60 time of 4.8 seconds for the Long Range variant and a 3.5-second 0-60 in the Performance variant. The Model Y Long Range features a top speed of 135 mph, while the Performance model gets up to 155 mph. 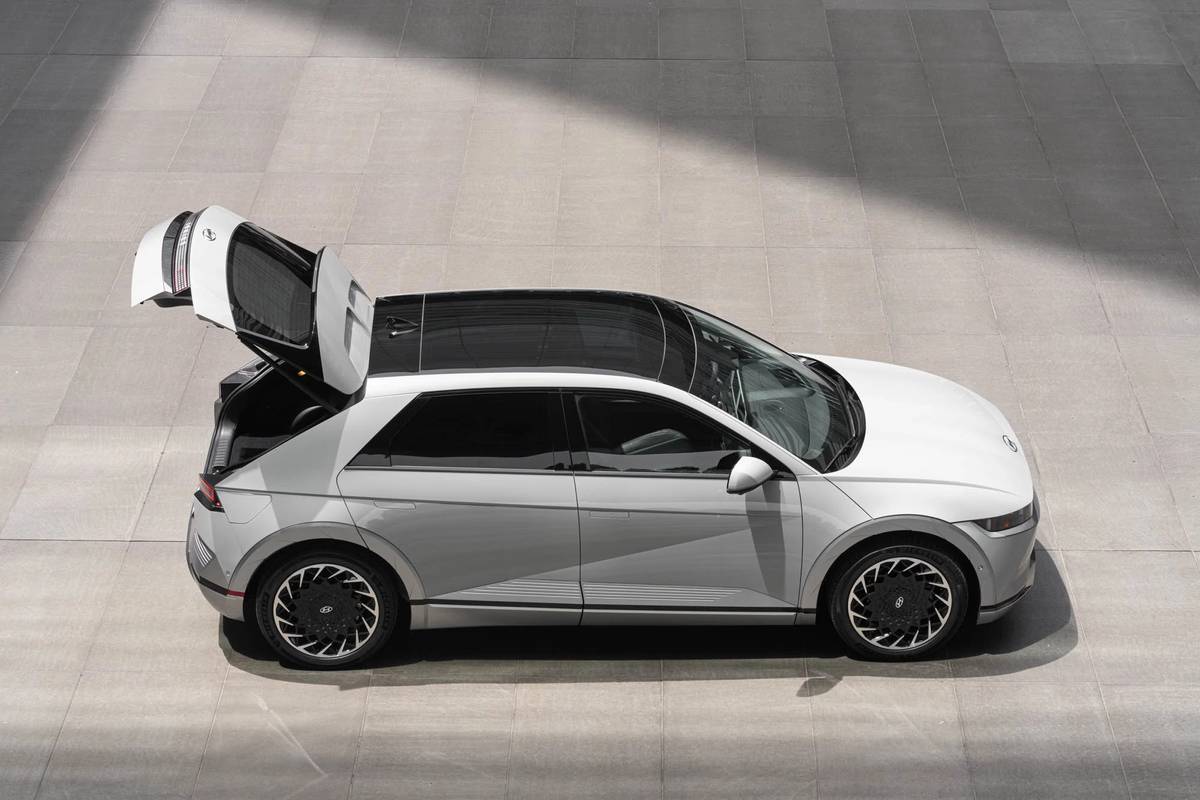 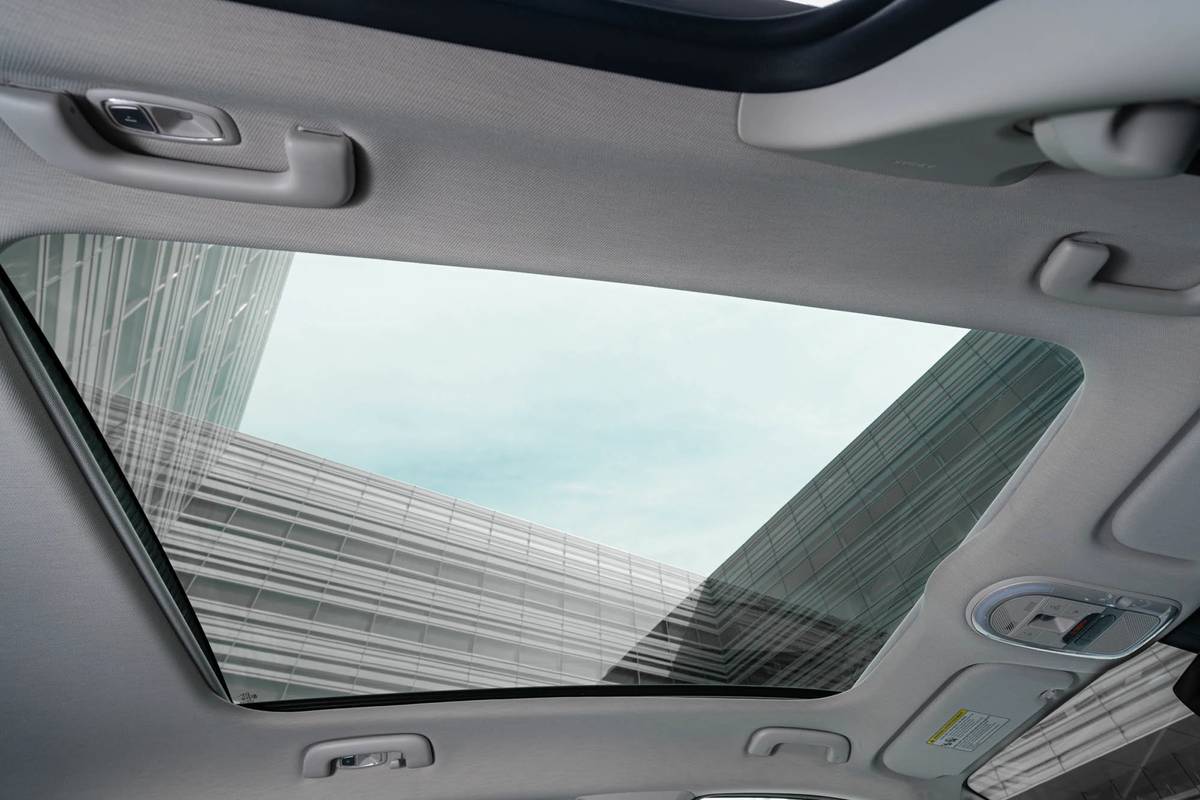 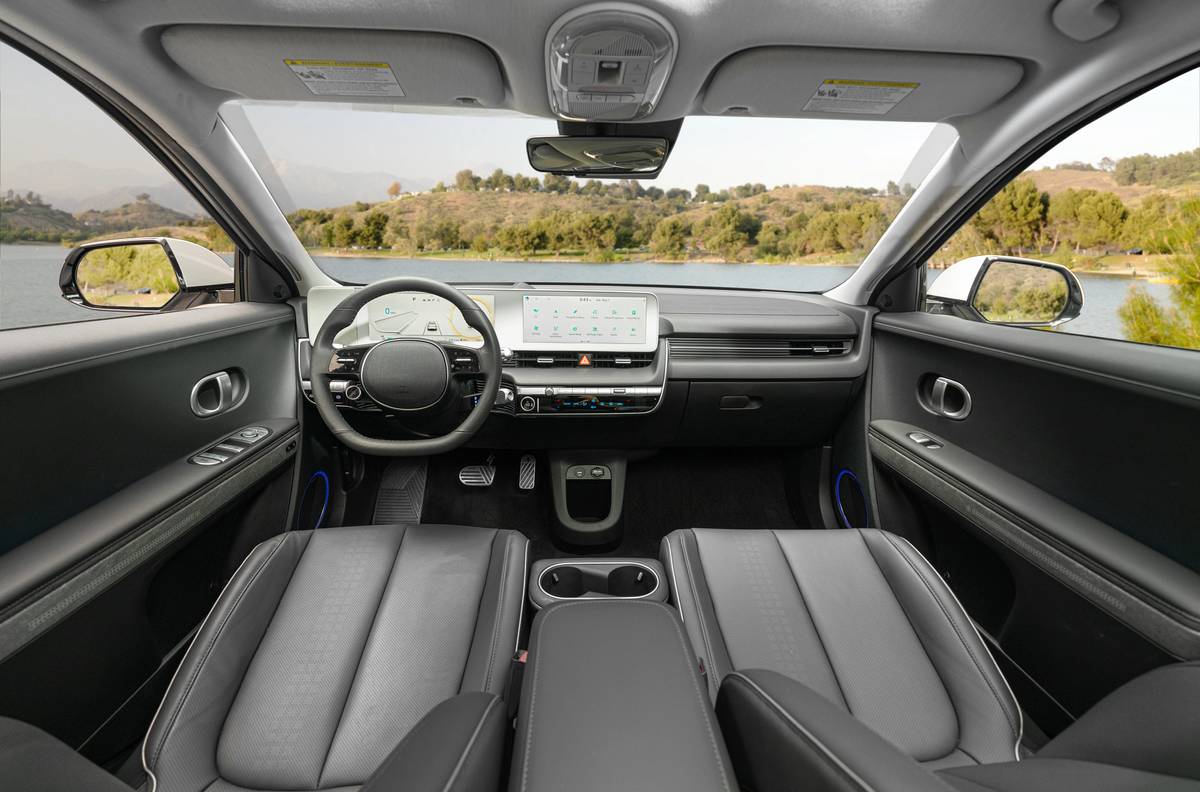 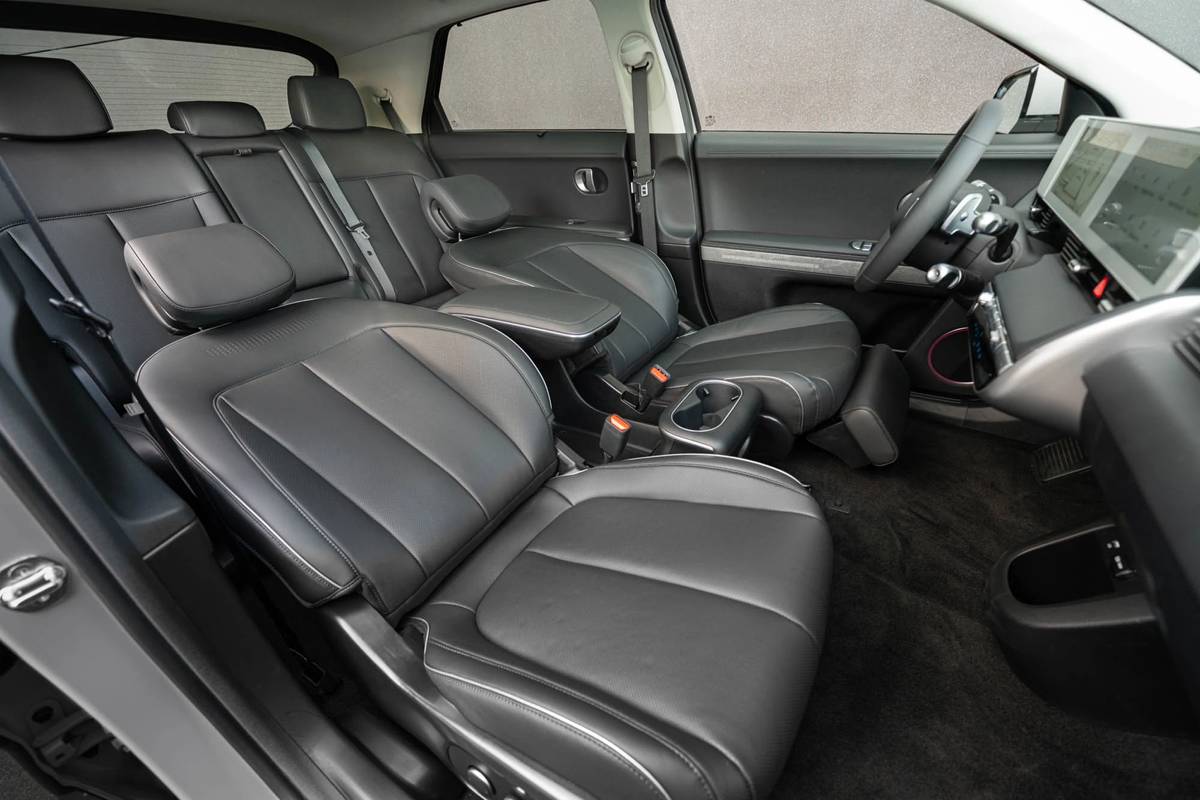 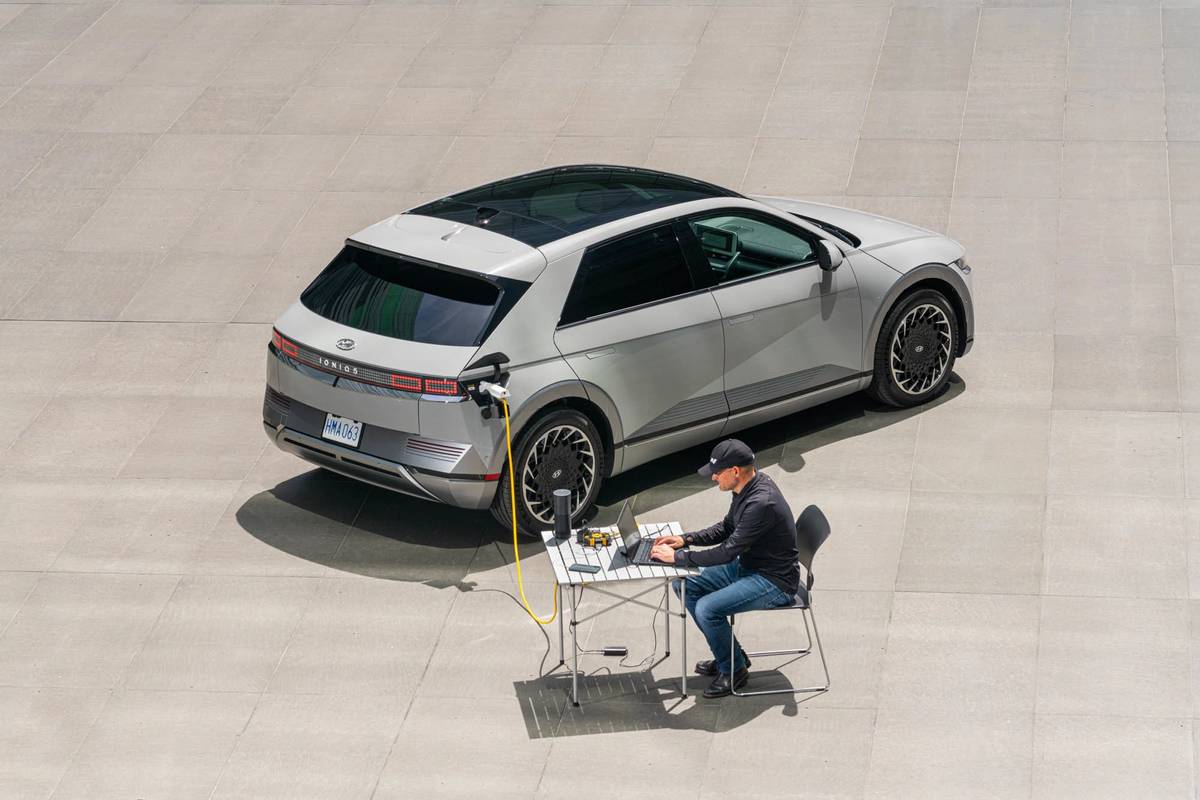 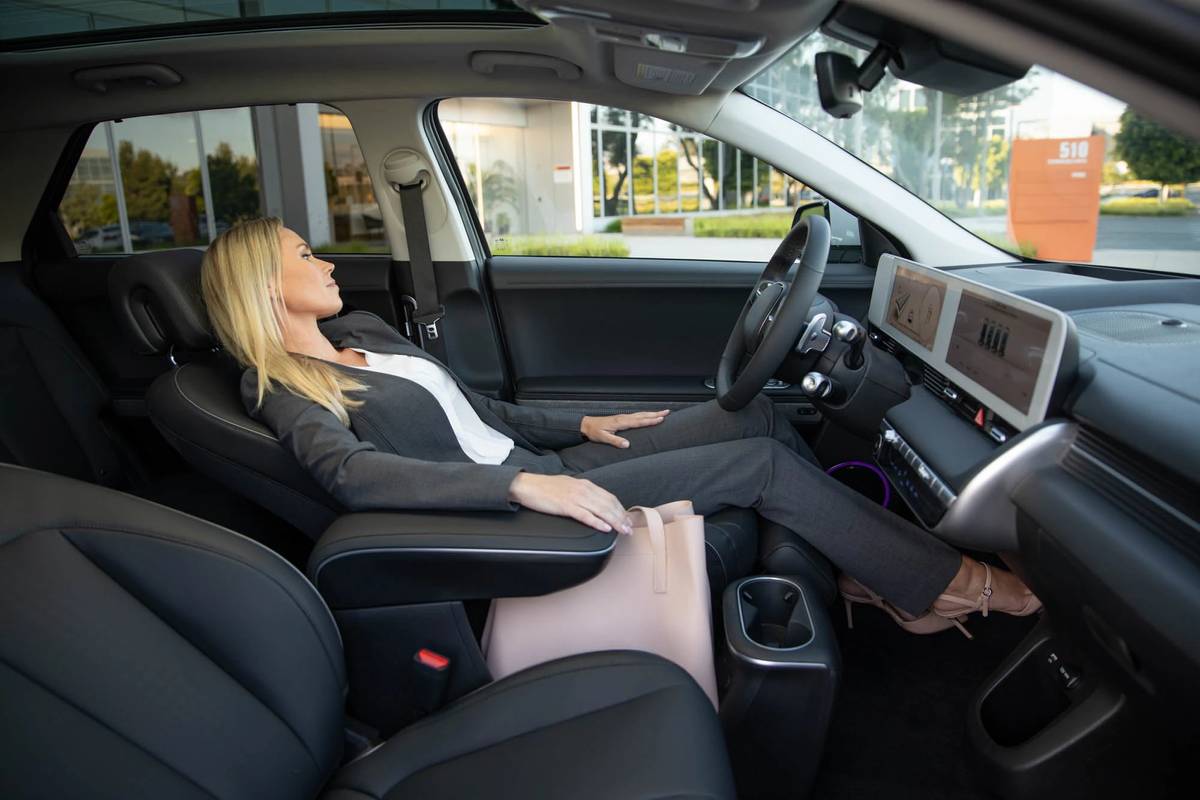 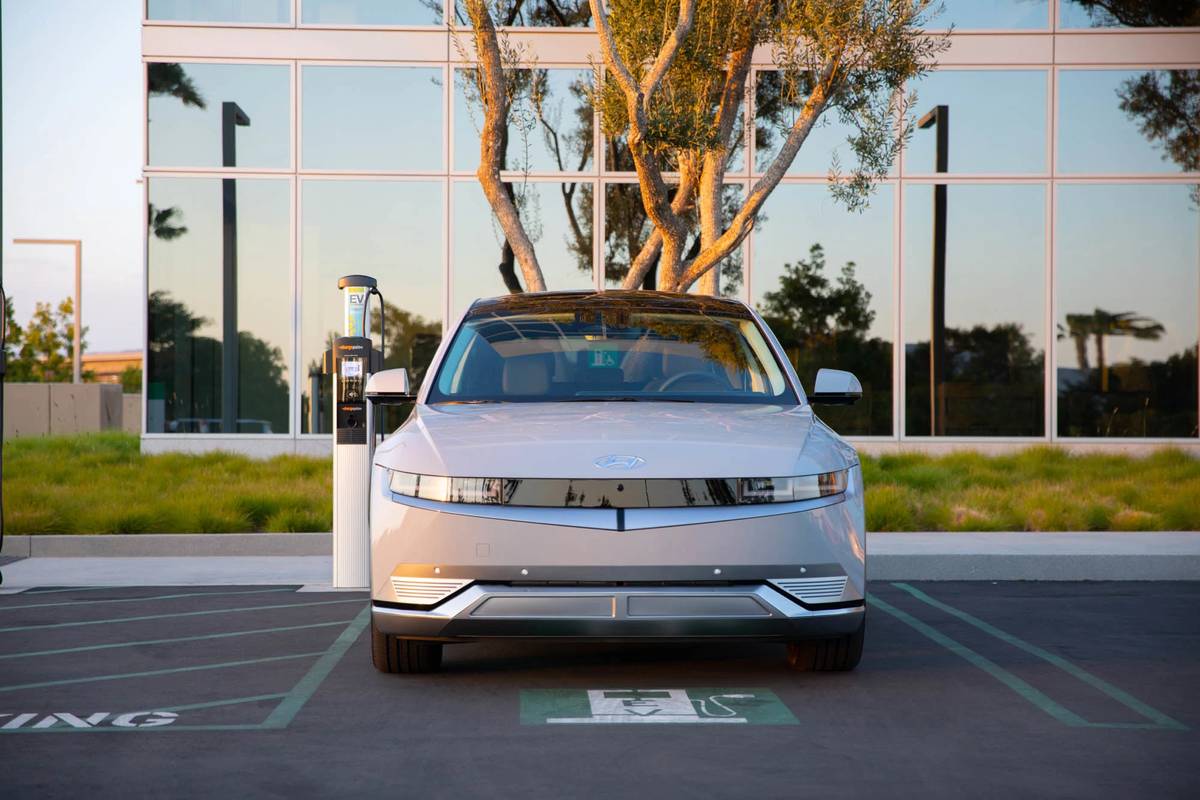 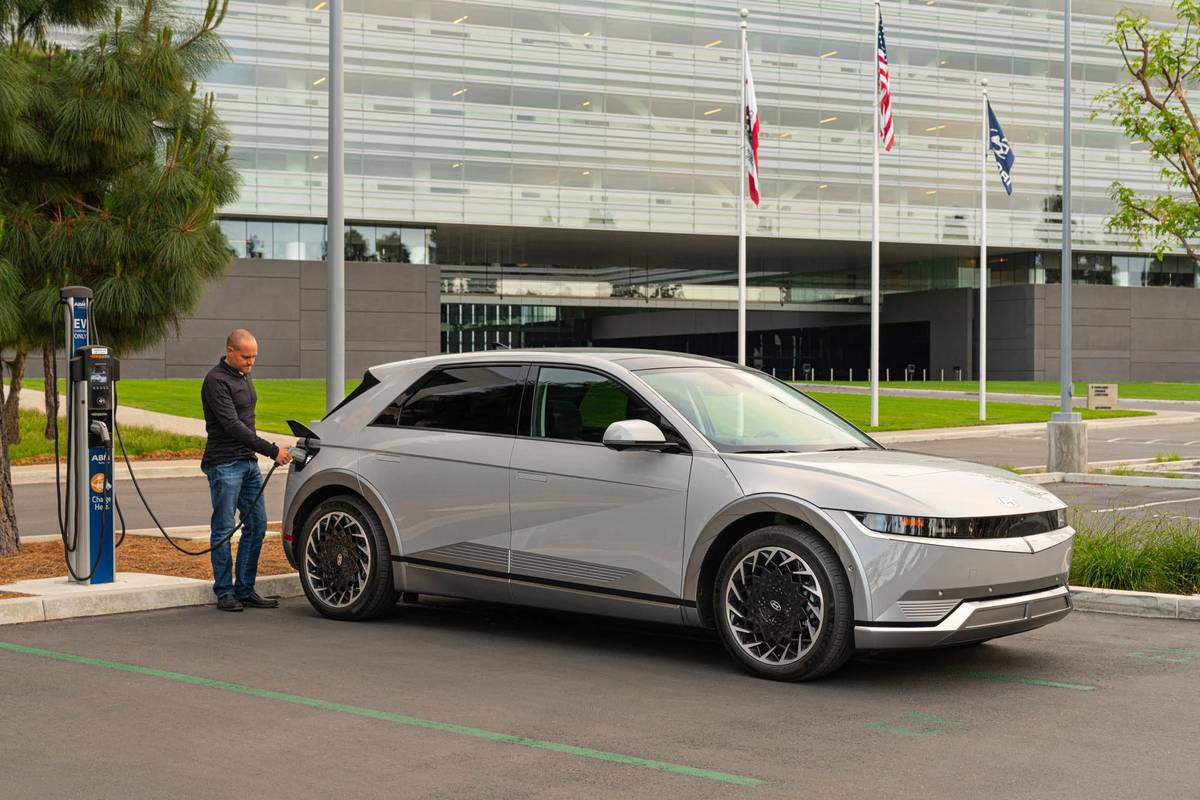 To alleviate range anxiety, a common barrier for EV adoption, Hyundai is targeting a maximum estimated range of 300 miles for the Ioniq 5’s single-motor (RWD) layout while providing fast-charging capability. The dual-motor AWD option drops the range to 269 or 244 miles, depending on trim level, though official EPA estimates have yet to be published for any variant. That said, Hyundai’s targeted range is competitive with the Mustang Mach-E’s 305 miles and beats the ID.4’s 250-mile EPA estimated range. The Model Y’s Long Range model leads the pack, with 326 miles of range.

The Ioniq 5 is expected to offer rapid charging that’s faster than the competition. Using a 350-kW charger with DC fast charging, Ioniq 5 owners can get the SUV from 10% to 80% in 18 minutes. The vehicle can also add 68 miles of range in approximately five minutes when drivers are in a pinch. Using standard AC Level 2 charging gets the SUV from from 10% to 100% in 6 hours, 43 minutes, Hyundai says.

In comparison, the Ford Mustang Mach-E with a standard-range battery can get to 80% from 10% in 45 minutes at a DC fast charger and can add 61 miles of range on a 10-minute charge, according to the automaker. The Tesla Model Y reaches 80% charge in about 30 minutes. And according to VW, the ID.4 takes 30 minutes to add nearly 200 miles of range through rapid charging.

Hyundai says the design of the Ioniq 5 interior is modeled after a smart living room and features flexible space, an open design and advanced digital technologies. Key interior features include a flat floor pass-through, a large panoramic sunroof with no cross-member for optimal visibility, magnetic portions of the dashboard you can attach pictures to and a center console that can slide up to 5.5 inches.

The Ioniq 5 is comparable in size to Hyundai’s Tucson compact SUV, but at 118.1 inches, the vehicle’s wheelbase is closer to that of the three-row Palisade SUV; in fact, it’s the longest wheelbase in Hyundai’s lineup. The Ioniq 5’s wheelbase, coupled with its short overhangs, creates a compact exterior for maneuverability while maintaining competitive occupant and cargo space.

On paper, the Ioniq 5’s 106.5 cubic feet of overall occupant volume beats the competition. When it comes to cargo space behind the second row, however, Hyundai’s SUV offers 27.2 cubic feet, which is short of the Mach-E (29.7 cubic feet) and ID.4 (30.3 cubic feet). Tesla does not report the cargo volume for the Model Y behind the second row. That’s on paper, of course; it’s important to note that comparing cargo space between automakers should be approached with caution, and our independent cargo measurements have shown slighter advantages for the ID.4 over the Mach-E; we have yet to measure the Ioniq 5 or Model Y.

The Hyundai Ioniq 5 arrives in the fall as the first vehicle in Hyundai’s Ioniq EV sub-brand. Shoppers will be able to choose from three trims levels: SE, SEL and the top-tier Limited. All models feature Hyundai’s SmartSense safety suite, with features like automatic emergency braking that can monitor cross-traffic. It can also intervene during lane changes with oncoming or merging traffic. The SE and Limited trims add Hyundai’s Highway Drive Assist II for lane positioning and smart cruise control that uses machine learning to mimic the driver’s acceleration and spacing habits.

Convenience features include Hyundai’s reclining zero-gravity driver’s seat, an augmented reality head-up display and a unique vehicle-to-load feature that turns the Ioniq 5 into a generator to charge small appliances, devices or other EVs.

The Ioniq 5 will initially be available only in zero-emissions vehicle states as well as Arizona, Florida, Georgia, Illinois, North Carolina, Pennsylvania and Texas. Hyundai says it will increase availability to more states as part of the 2022 rollout. Pricing for the Ioniq 5 has yet to be announced.