Quietly appearing in showrooms over the next few weeks will be an all-electric SUV that’s quite likely going to surprise a lot of people for a few different reasons. The smallest entry into the American lineup for Mercedes-Benz’s electric division, called Mercedes-EQ, is set to arrive soon: the 2022 Mercedes-EQ EQB SUV. Unlike the larger offerings in the Mercedes-EQ lineup (the EQE and EQS sedans and upcoming EQS SUV), the EQB is based on an existing model that’s been heavily modified to accept an electric powertrain. This is essentially an electric version of the popular GLB SUV and, interestingly, also retains that model’s five- or seven-occupant options. That’s the first surprise; the second is just how good it is to drive and use. 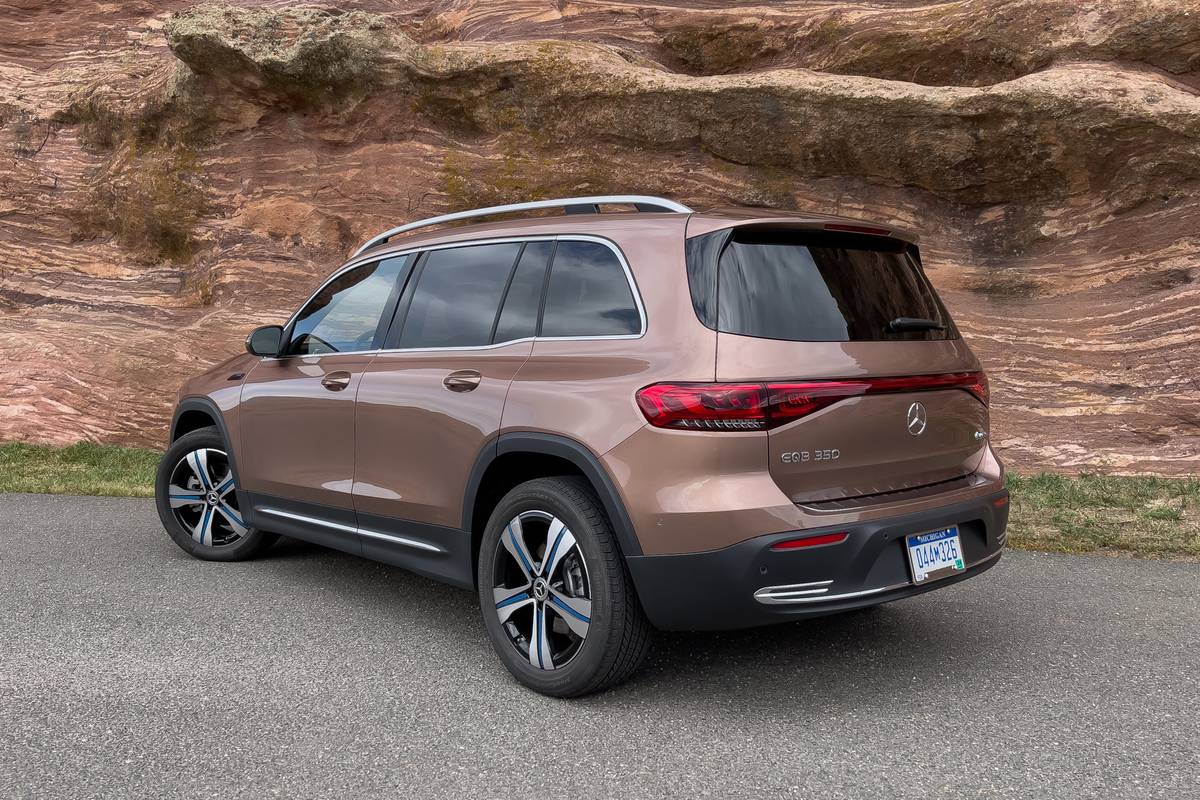 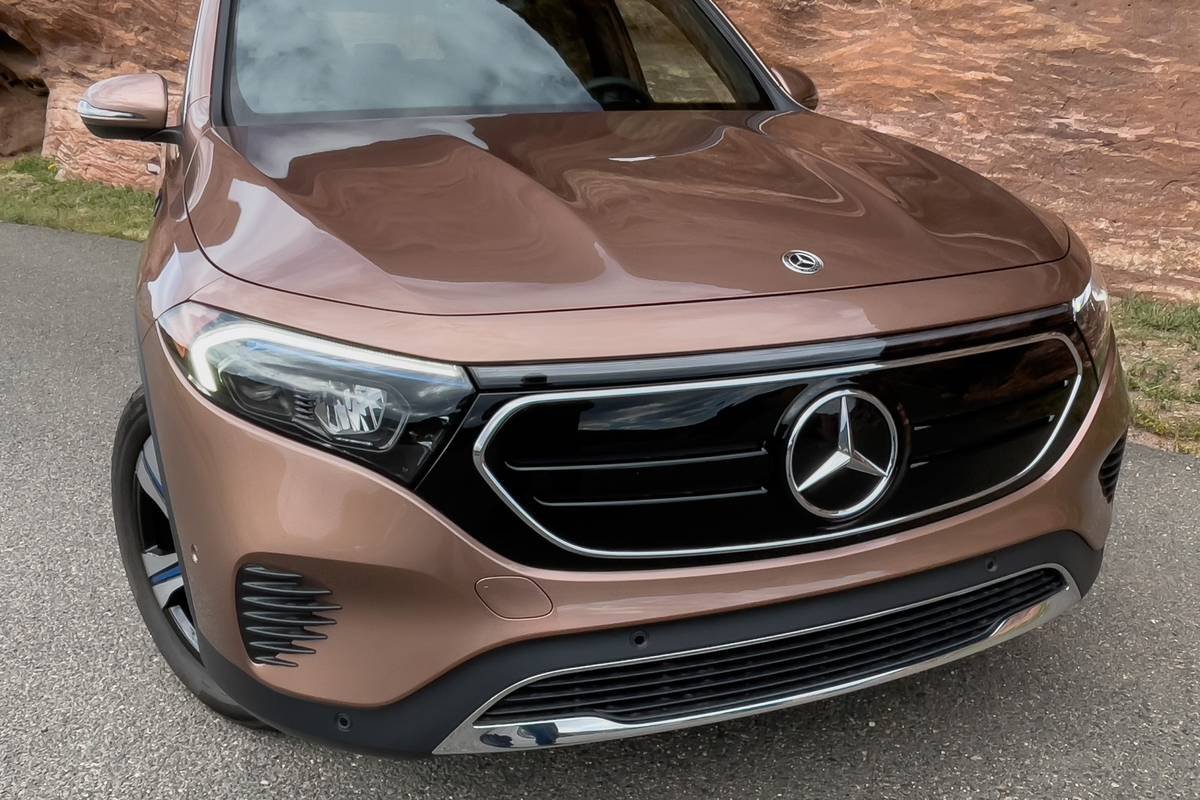 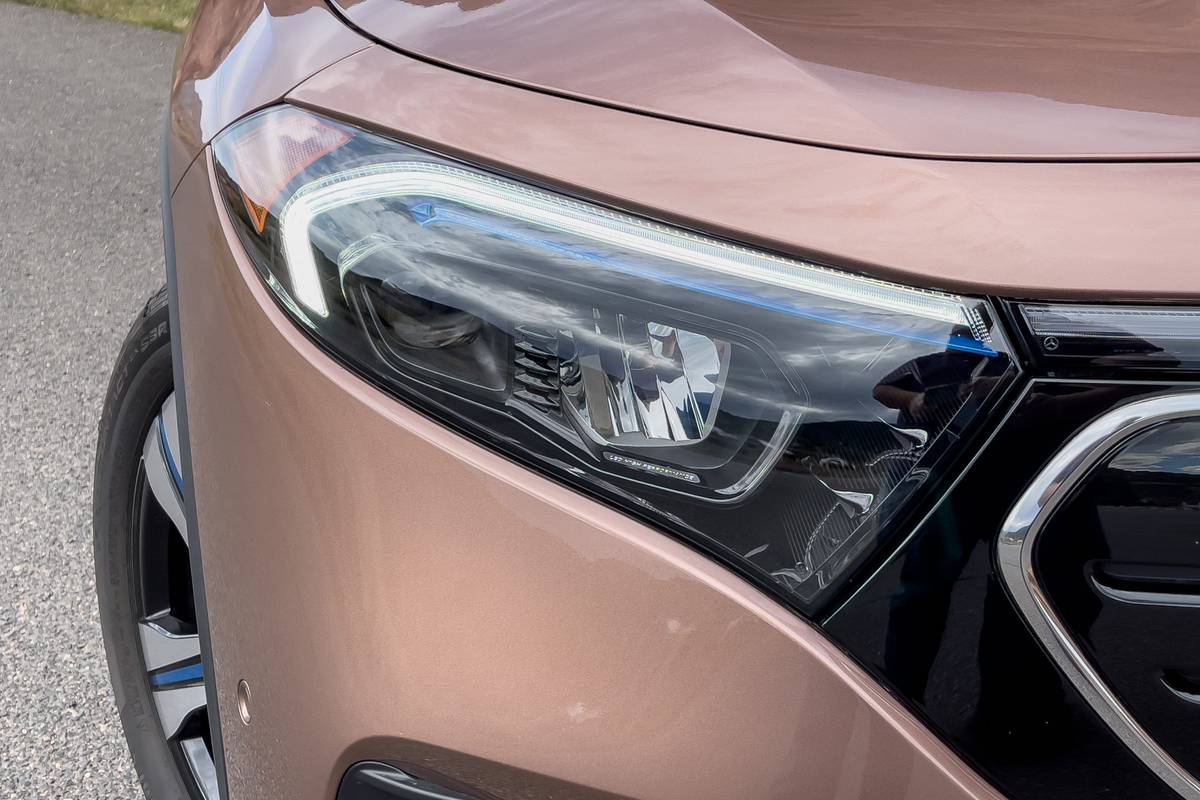 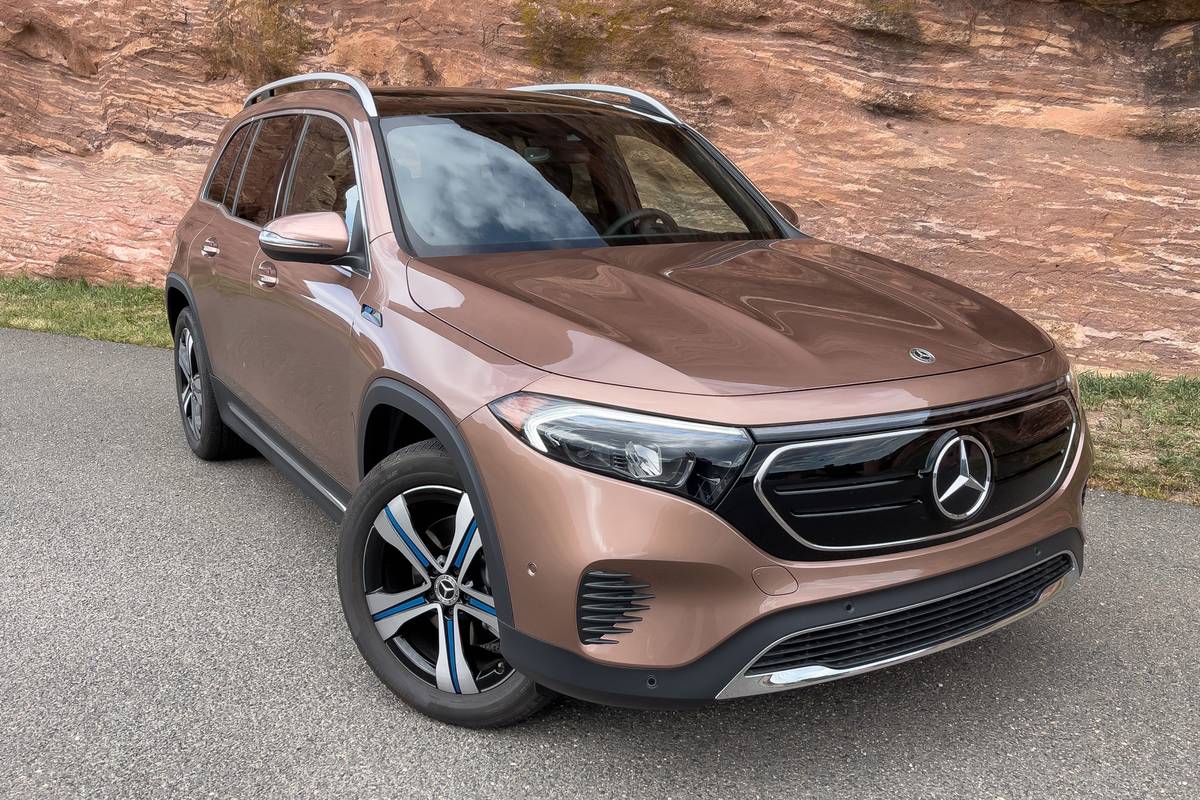 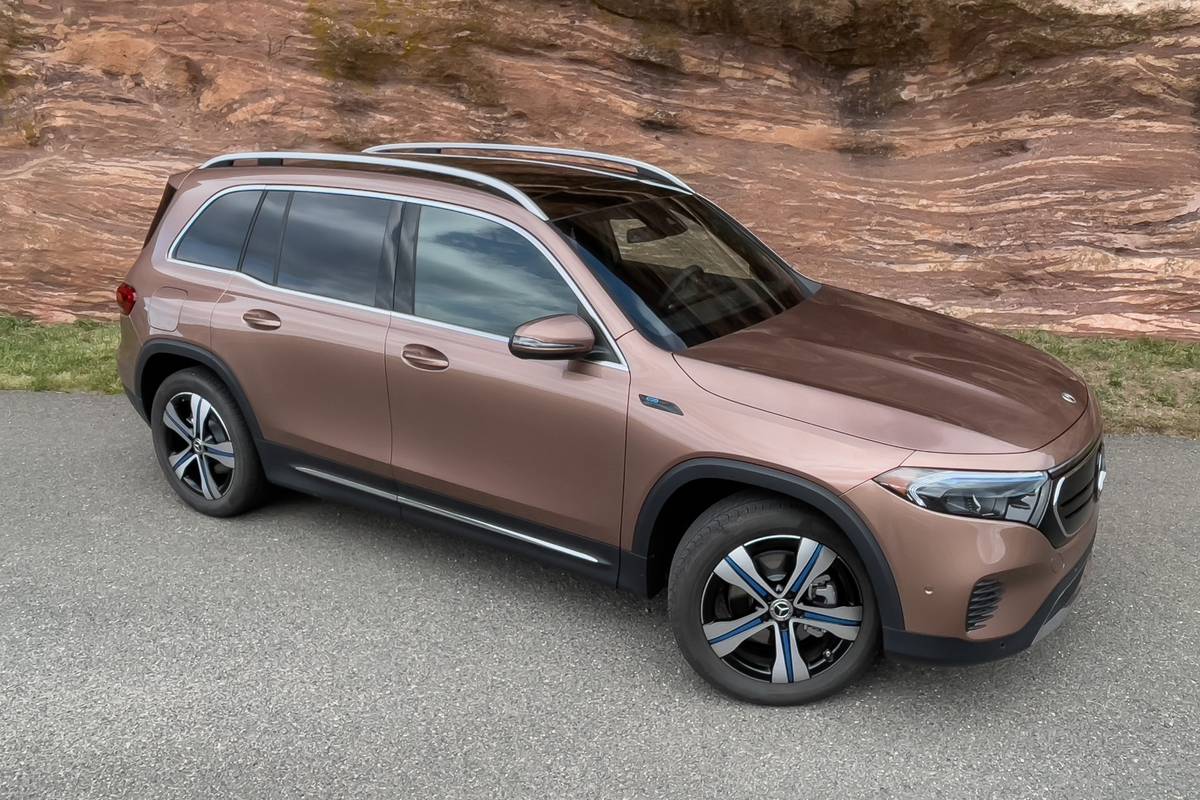 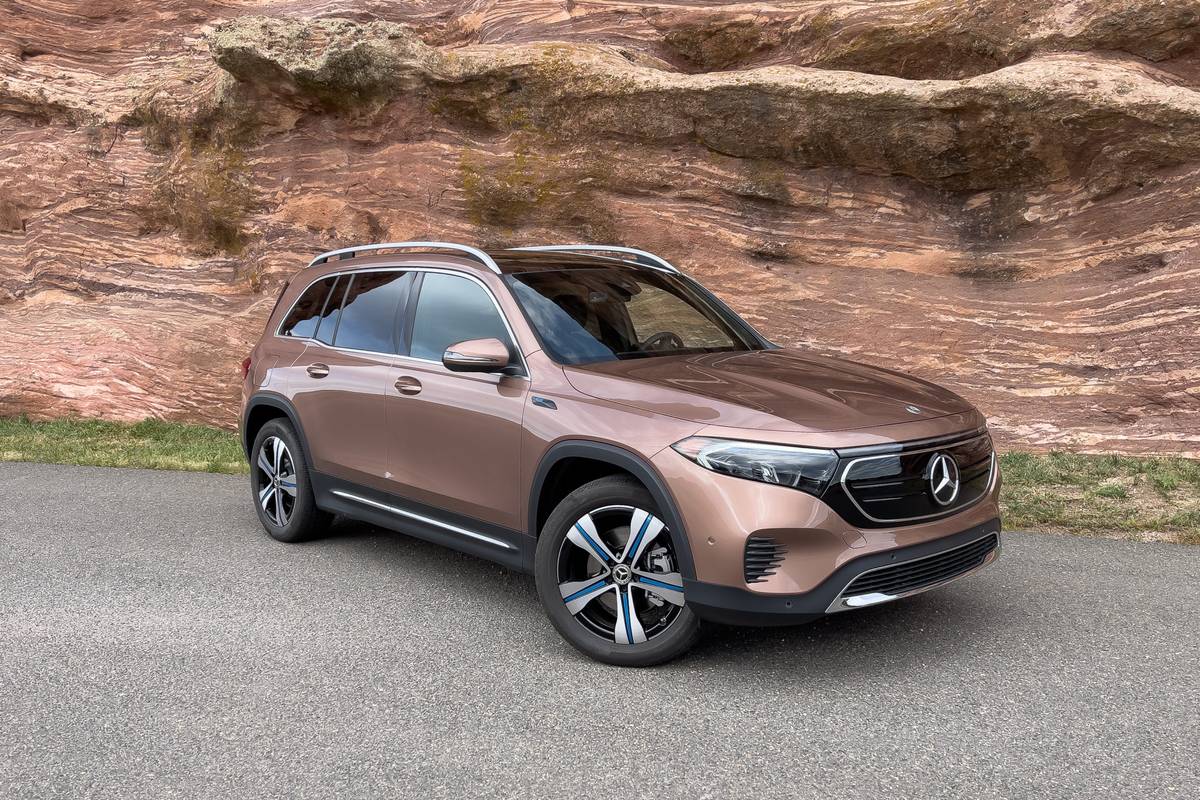 Right off the bat, the look of the EQB is familiar. Only the front and rear styling has changed in its transition to an electric vehicle, and along with some special colors and wheels, the idea was to keep it as normal as possible; if you didn’t know what you were looking at, you might just assume it’s a typical gas-powered model. But the blocked-off, smoothed-over grille out front with the new signature Mercedes-EQ lighting strip above the headlights help identify it as something more unusual. Unique to the EQB was my test car’s Rose Gold paint, which Mercedes representatives say is going to be a signature color for the company’s electric offerings.

Overall, the look is conventional — not swoopy, crazy modern or science-fictiony like the EQE and EQS sedans are. It’s a comfortable introduction to someone who might be interested in transitioning from a more familiar Mercedes-Benz product into an all-electric alternative, and it should work well in that regard. 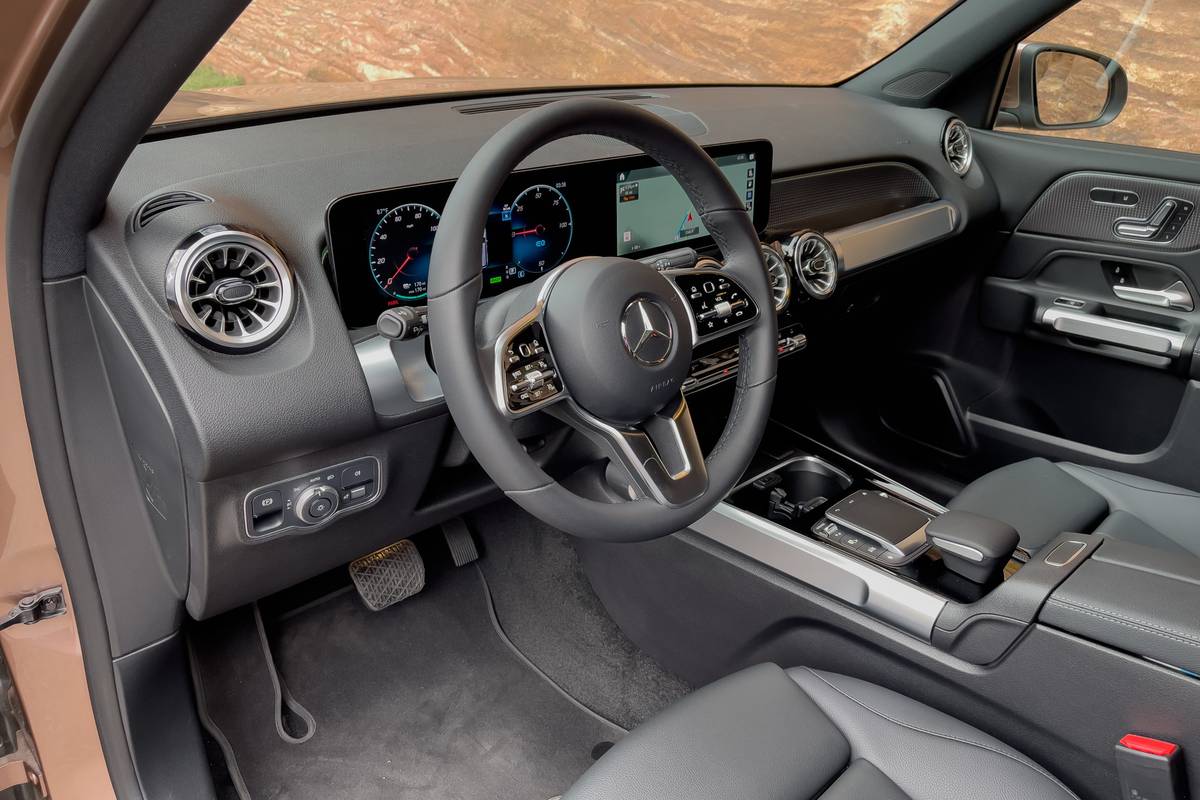 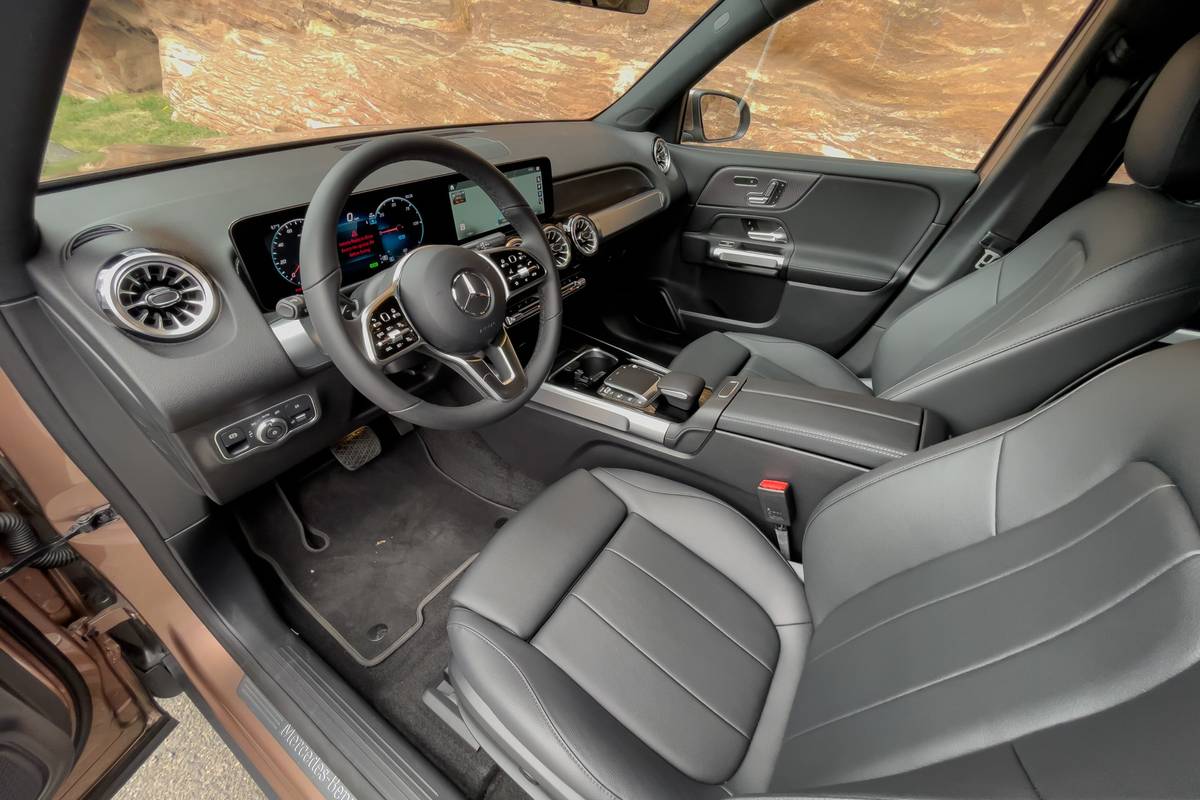 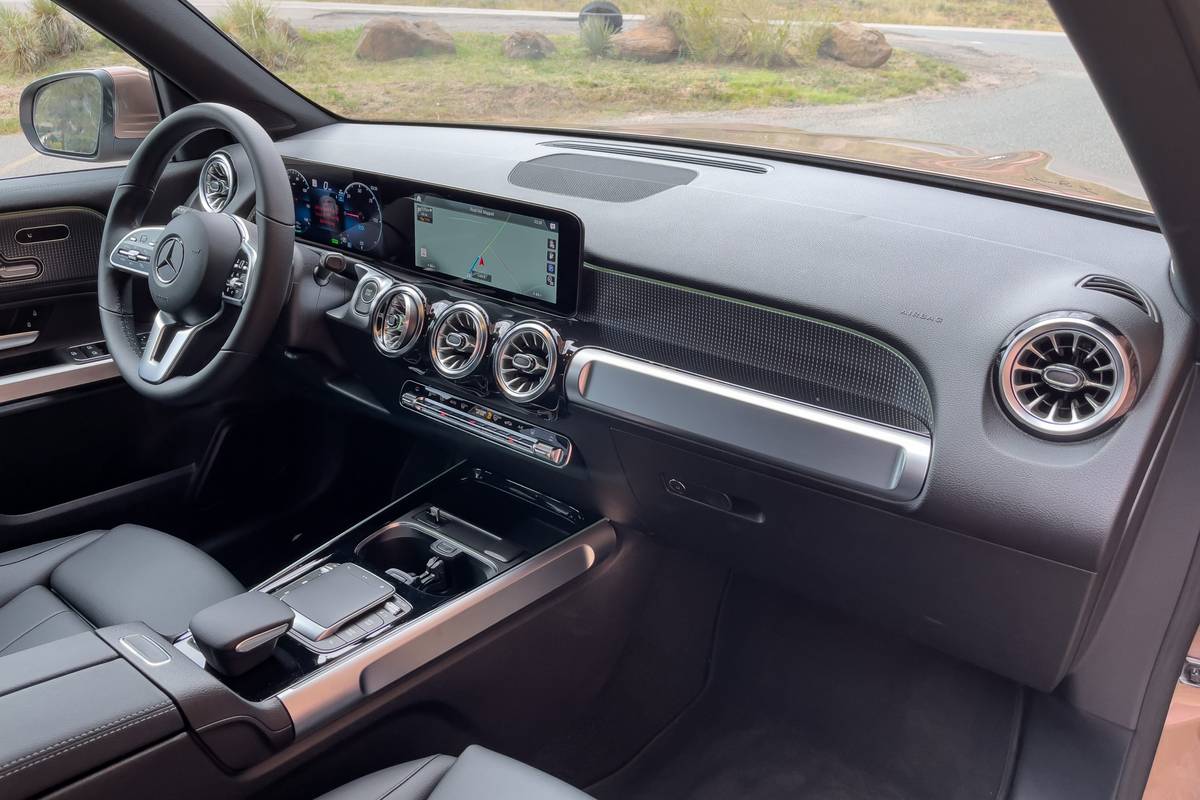 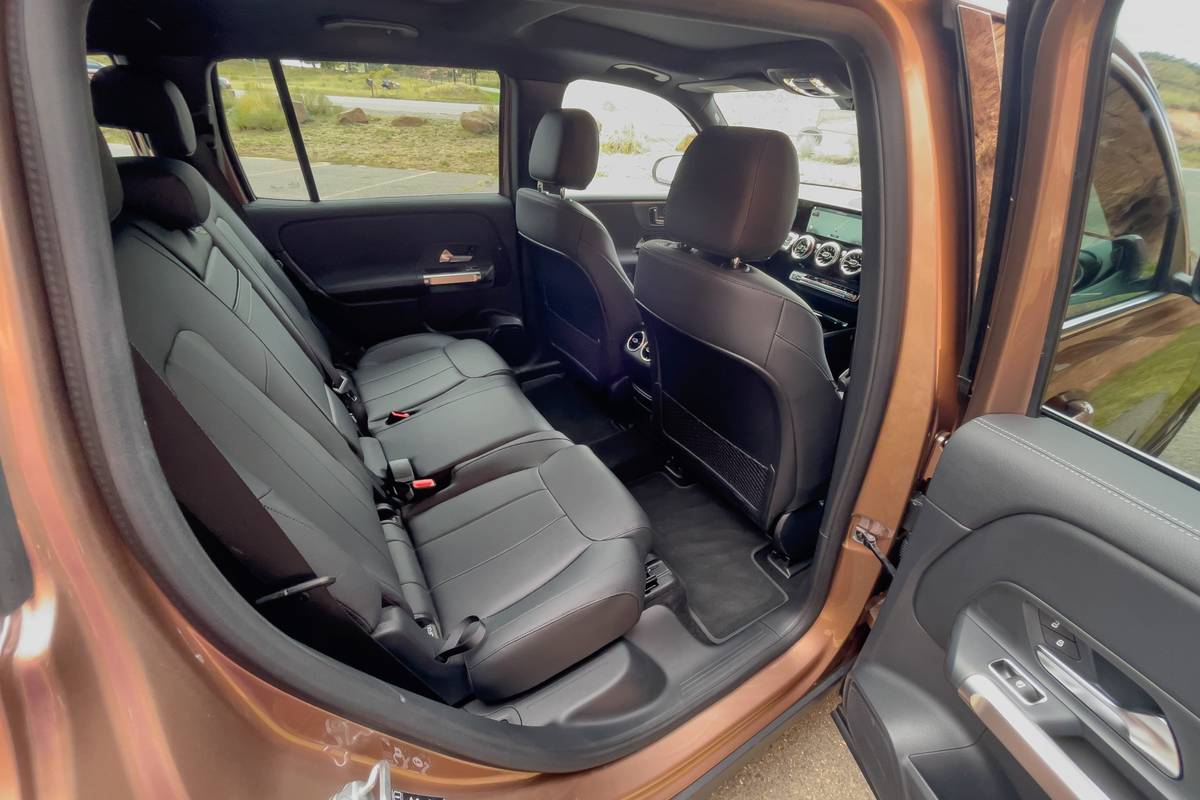 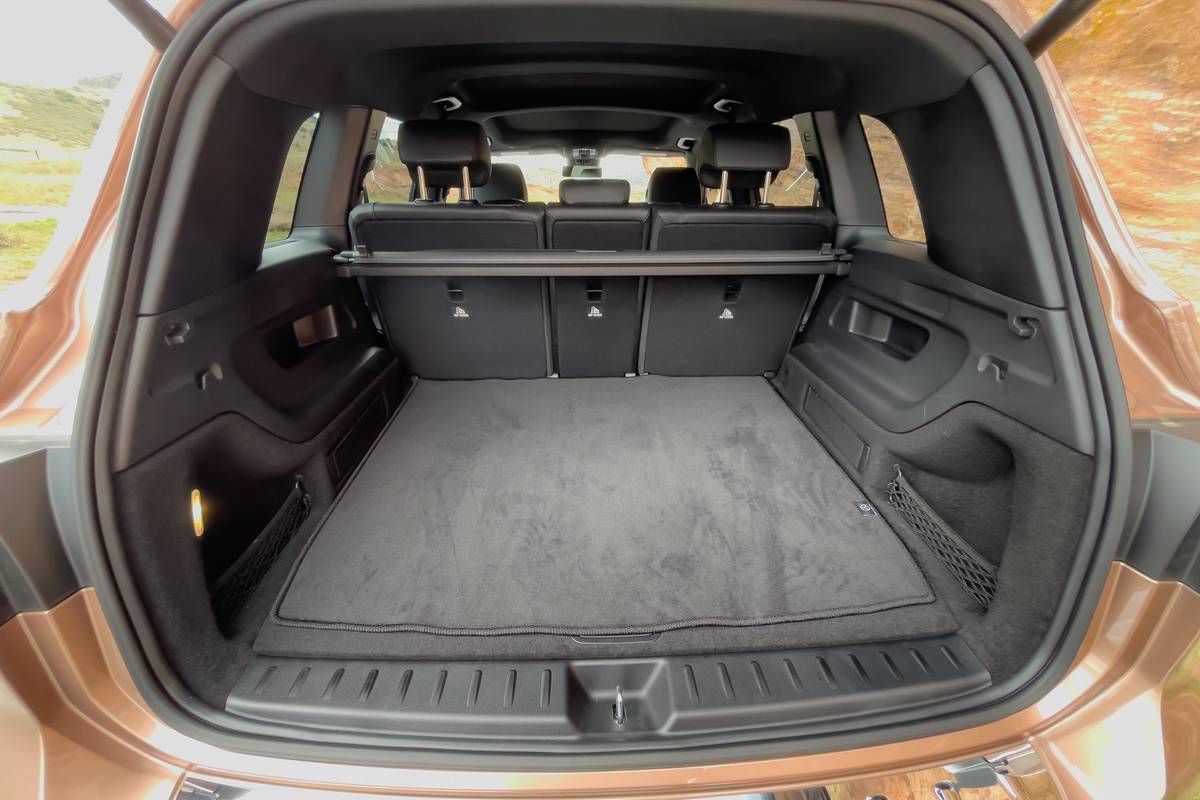 Just as Familiar Inside

Step into the upright cabin and you face an interior nearly identical to the standard gas-powered GLB’s, which is a good thing. Of Mercedes’ various compact offerings, including the more space-challenged GLA, the formal roofline of the GLB and subsequent EQB create a much roomier feel inside. Visibility outward is excellent, driving position is comfortable and tall, and there’s a surprising amount of legroom, headroom and hip room in both the first and second rows of seats. Yes, there is an optional third row, but it’s suitable only for children. It’s made a bit more usable by the fact that the second row can slide fore and aft. For a small family, having that extra capacity for a family hauler that might see occasional duty as an emergency soccer team transport might be useful to have; for most everyone else, skip the third row or wait for the much bigger upcoming EQS SUV instead.

Perhaps what might surprise people the most about the EQB is the SUV’s interior tech. This is the last-generation version of the Mercedes-Benz MBUX multimedia system, not the latest and greatest version that graces the company’s newest offerings. Normally, we like having the latest and greatest of anything, but in this case, the previous system is frankly better. It’s easier to use, with far less information overload and controls that are still buttons and switches, not capacitive-touch.

These little details give the EQB a more luxurious feel than a lot of the newer offerings from the marque thanks to actual tactile feedback for those buttons and switches instead of just the feel of a flat plastic panel under your fingertips. It might not look as flashy as the newest MBUX screens — and indeed, the 10.25-inch digital gauge cluster and accompanying 10.25-inch central touchscreen did look a little dinky after getting out of an EQE earlier in the day — but they work well, they’re positioned properly, and they’re far less likely to cause user frustration than the newer systems. 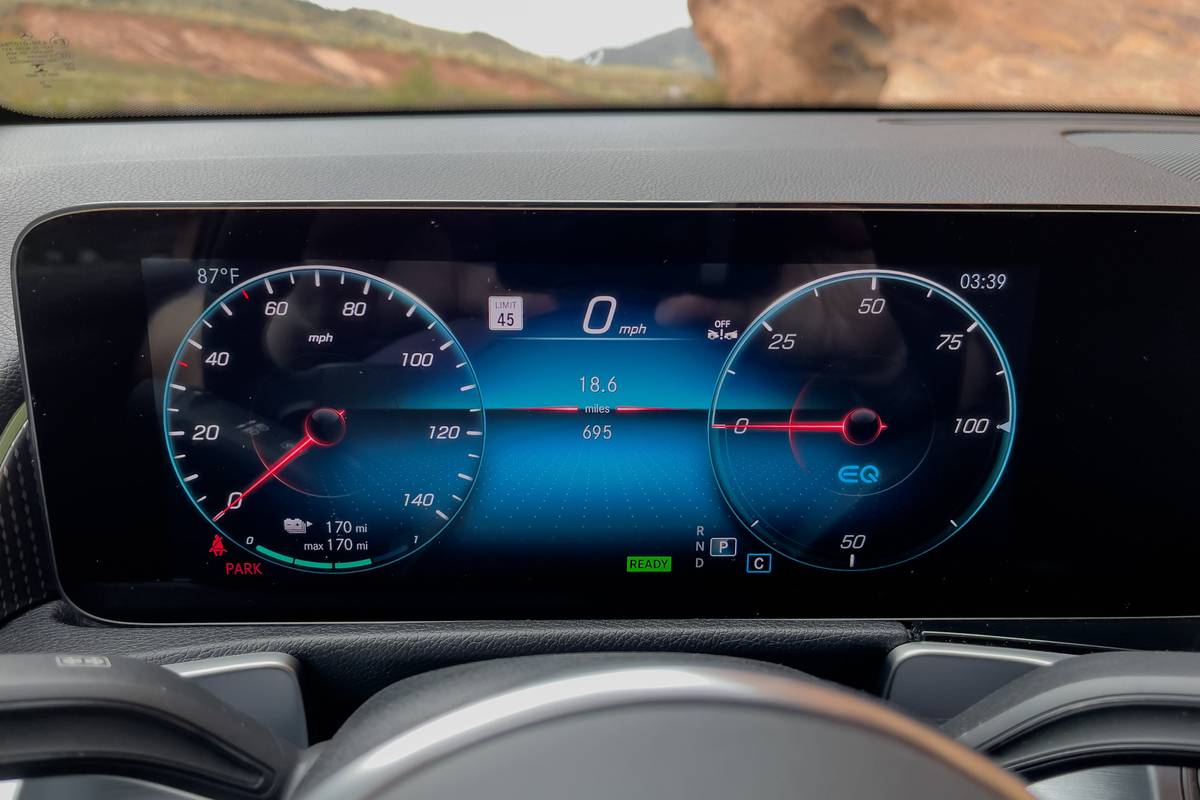 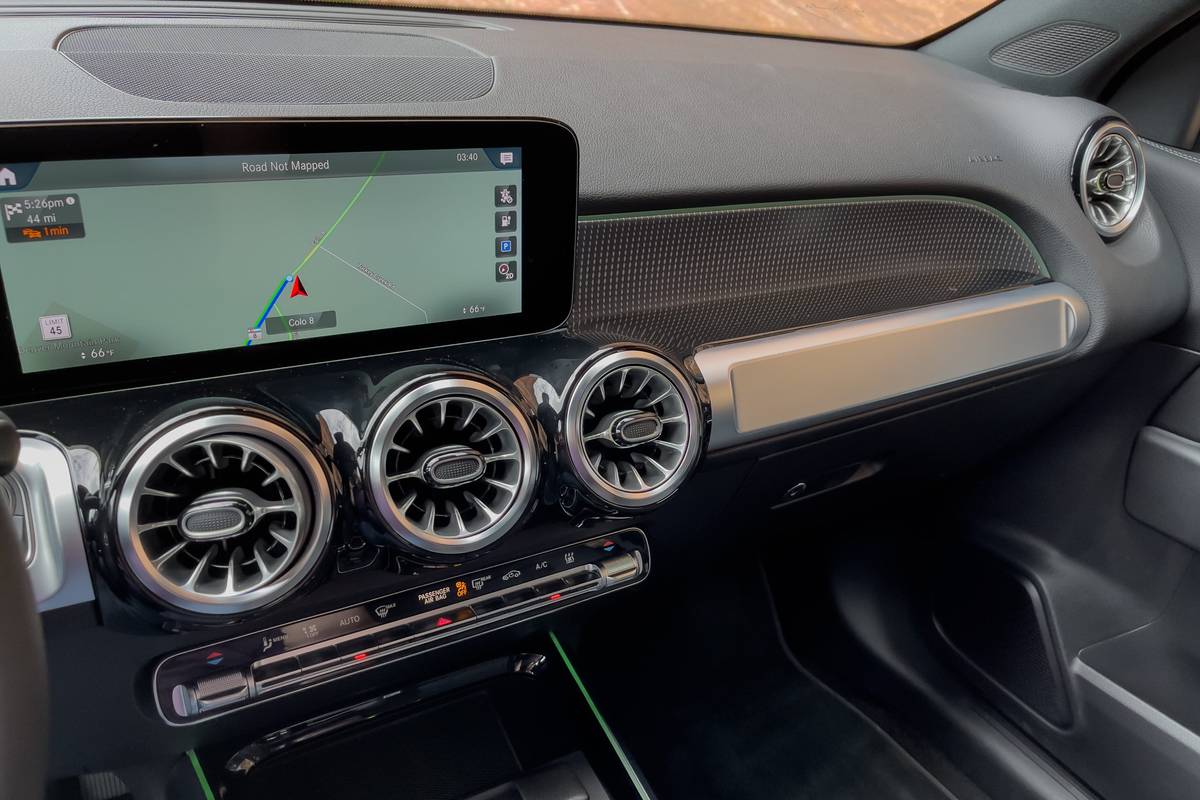 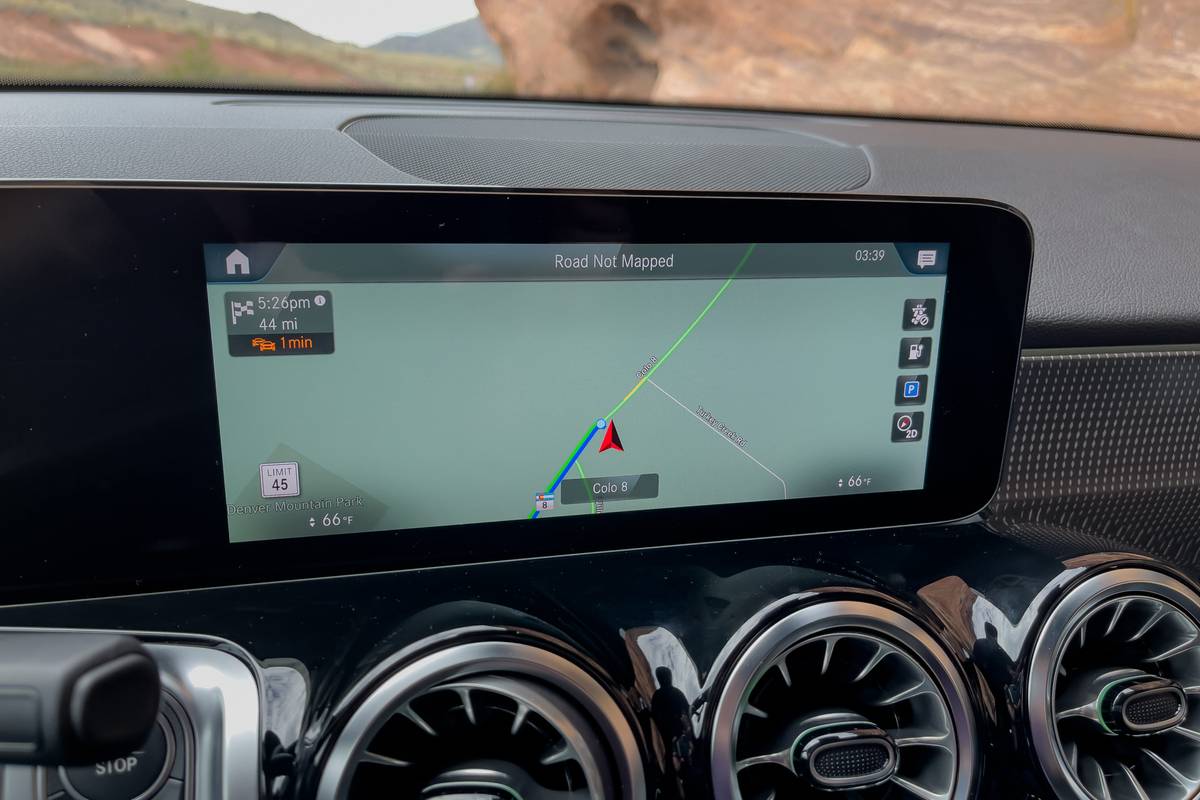 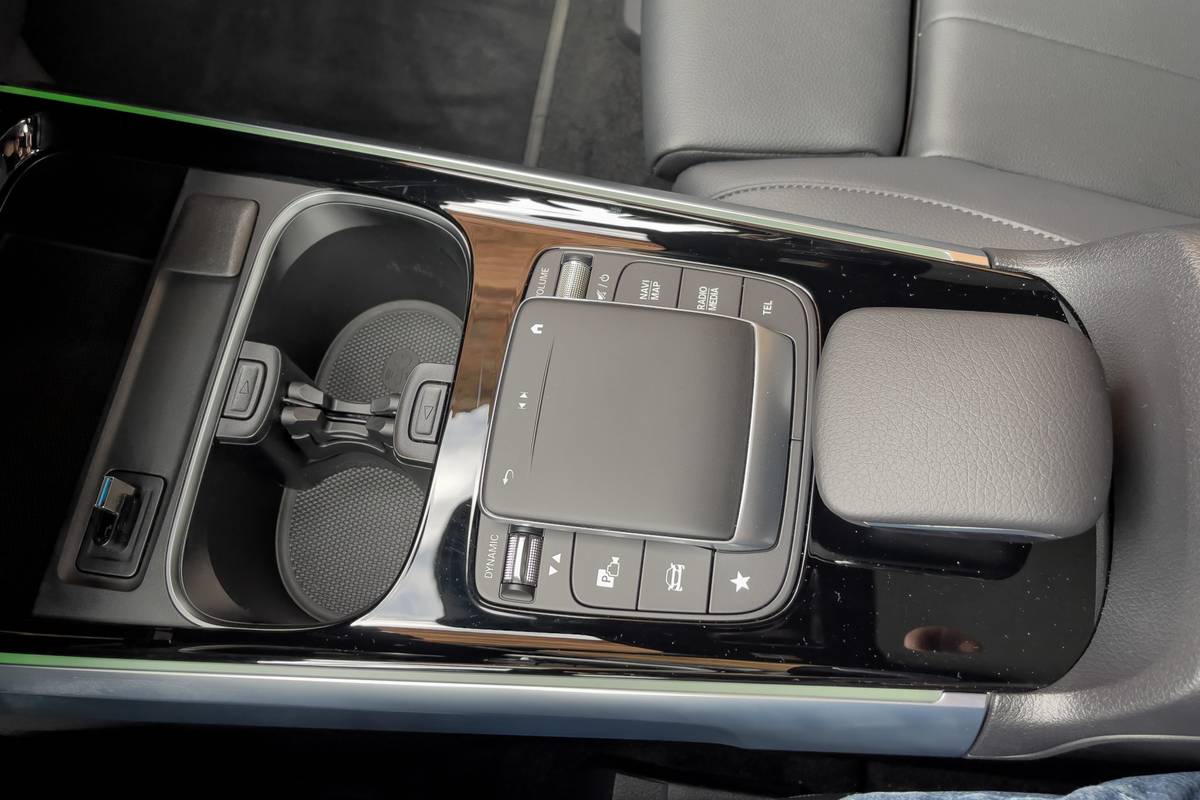 Fun to Drive, But Not Too Much Fun

To start, the EQB will come in two flavors: The EQB300 4Matic has standard all-wheel drive, with one motor on each axle and a combined system output of 225 horsepower and 288 pounds-feet of torque. Or you can bump up to the EQB350 4Matic, like my test car, and get a healthier 288 hp and 384 pounds-feet of torque. Each are powered by a 70.5-kilowatt-hour lithium-ion battery pack — a bit smaller than the ones found in the EQE and EQS, but still likely to propel the EQB for about 230 miles on a charge, according to what my test vehicle was showing at the start of my drive (final EPA range estimates are not yet available).

While Mercedes hasn’t given any published 0-60 mph estimates for the EQB, my test car felt plenty zippy in traffic around the greater Denver area, which is to be expected from an electric car with plentiful torque available right off the line. Acceleration is calm when called for or brisk when requested, but as with most EVs, it was always delivered in a seamless rush. Braking was also quite good, with firmer pedal feel and better communication to the driver than I’ve experienced in other Mercedes EVs. Activating the more aggressive regenerative braking modes doesn’t have the same pedal-moving trick that the EQE and EQS do, allowing for one-pedal driving without the frustrating action seen in other EQ models.

Where the EQB slows down a little is in its ride and handling. The ride is excellent, but you begin to feel just how heavy the little crossover is when you hit some bumps or dips in the pavement. The EQB handles them well, but then porpoises a bit as it settles on its suspension in a way more reminiscent of a big, 1970s American sedan. It’s not what you’d call “wallowy,” but it does require a cycle or two of bouncing on some bumps to recover its composure.

You feel this heft again when you change directions or try for some spirited driving on twisty switchback mountain roads. The EQB responds with composure but not enthusiasm thanks to its fairly numb steering feel and, again, that sense of weight being thrown around due to the heavy battery pack. The EQB weighs 4,718 pounds, which is 827 pounds more than a comparable seven-occupant GLB250 4Matic, and while it’s well accommodated by the modified suspension, you do feel it. It’ll be better to use the EQB as an urban commuter and runabout instead of a canyon carver; it simply wasn’t meant to be used like that, and it’s happier just being a family truckster.

The 2022 EQB was supposed to be on sale in the summer, but it hasn’t yet arrived in showrooms and the end of the year is in sight. We do know starting prices, however: The EQB300 4Matic will start at $55,550 (prices include destination fee), while the more powerful EQB350 4Matic will start at $59,100. This pretty much puts it smack on par with the latest prices for the Tesla Model Y (as of this writing, anyway), upcoming Audi Q4 E-Tron and high-end trims of the Volkswagen ID.4. And in 2023, it will face additional competition from the likes of the 2024 Chevrolet Blazer RS and SS EV, as well, which will be a bit bigger than the EQB but lack the Mercedes luxury cachet.

For now, however, the new EQB SUV is an interesting alternative to a Tesla Model Y, providing a comfortable, stylish and useful interior, if not quite matching up on possible range or performance. For people looking for something other than a Model Y, it’s worth putting on your list.