The verdict: The Volvo C40 Recharge is a flawed, style-over-substance crossover “coupe” that, while comfortable, has half-baked tech and requires too many compromises.

Versus the competition: The C40 Recharge immediately feels outdated. Competitors offer more range, faster charging and better onboard technology without making you deal with the Volvo’s poor outward visibility and lack of headroom.

The 2022 Volvo C40 Recharge is Volvo’s second all-electric SUV, and it’s arriving in showrooms this year. It will join the company’s other fully electric offering, the XC40 Recharge, which is based on the gas-powered XC40. The C40 Recharge is a “coupified” version of that car, with a lower, more rakish roofline meant to appeal to folks looking for a sportier take on a Volvo electric vehicle. It has the same bits under the skin as the XC40 Recharge, and largely the same interior, but unlike the XC40, it only comes in a fully electric version — no gasoline option available.

So, with less interior headroom and cargo space than the XC40, has chopping the top off an SUV compromised its usefulness in a quest for style? The answer is yes — and that’s not the only thing that’s gone wrong here. 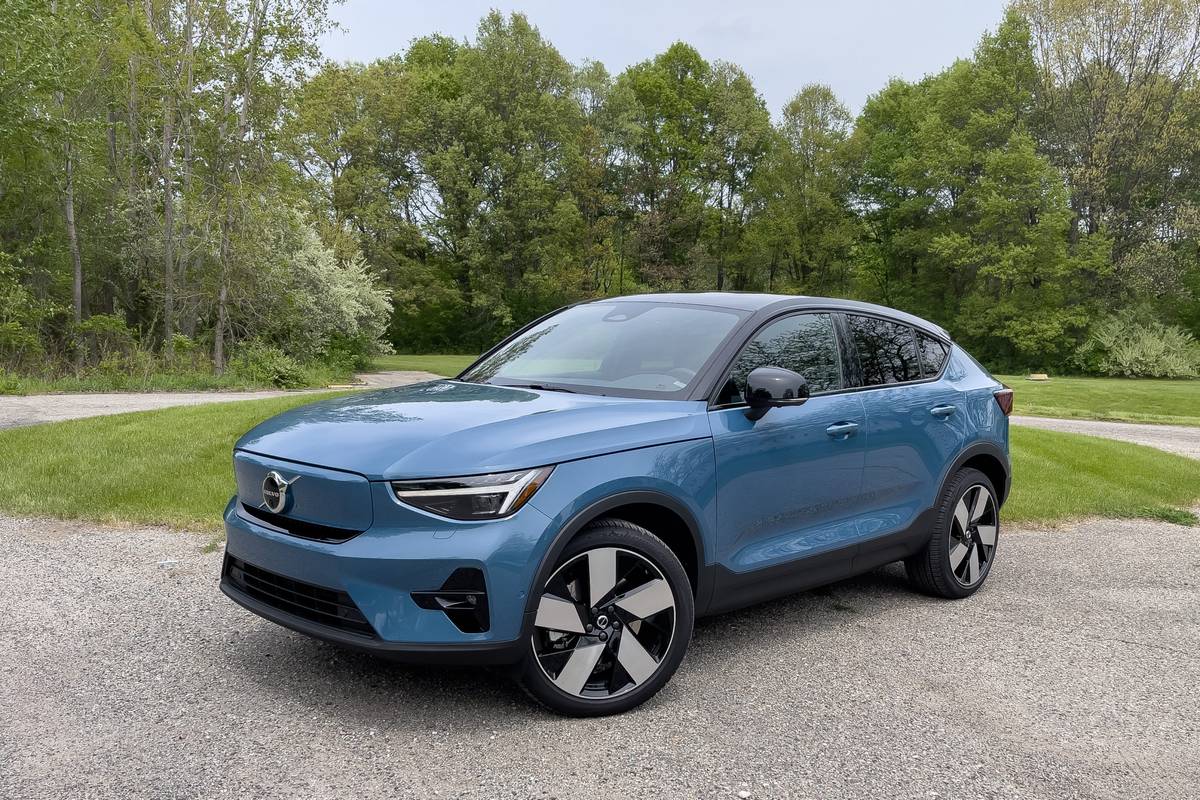 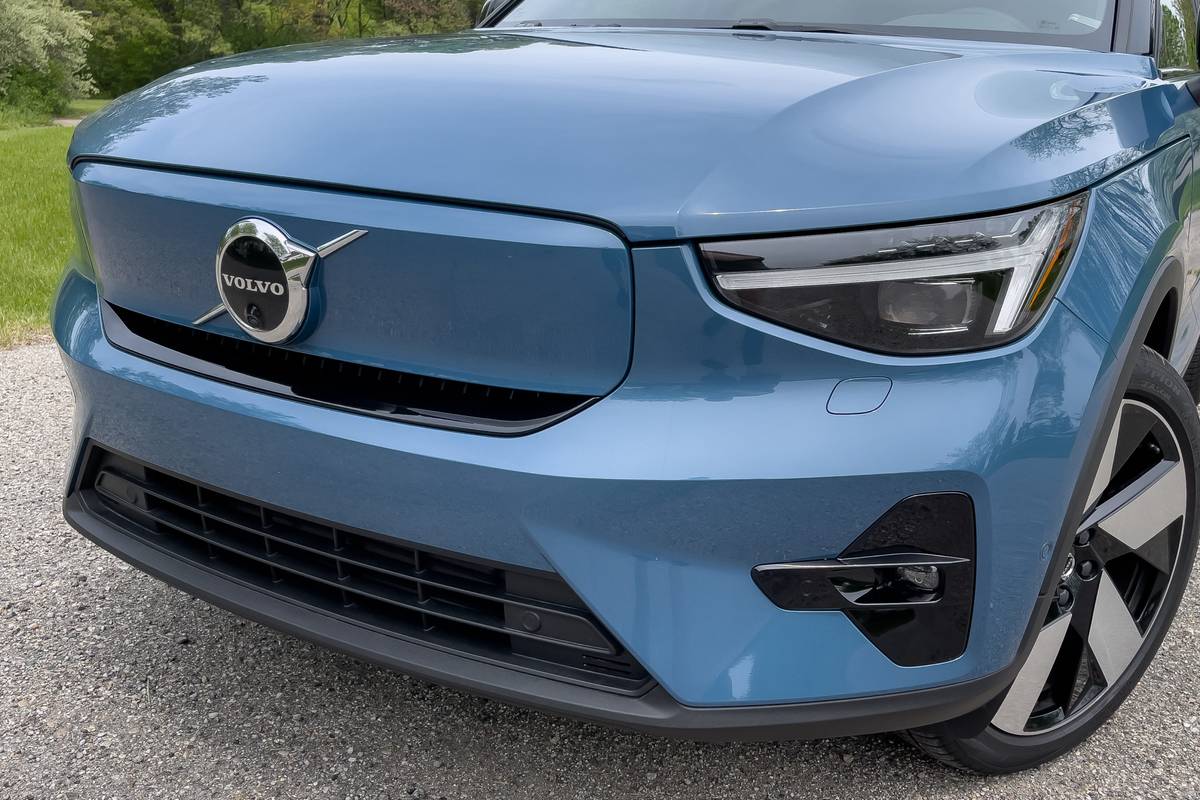 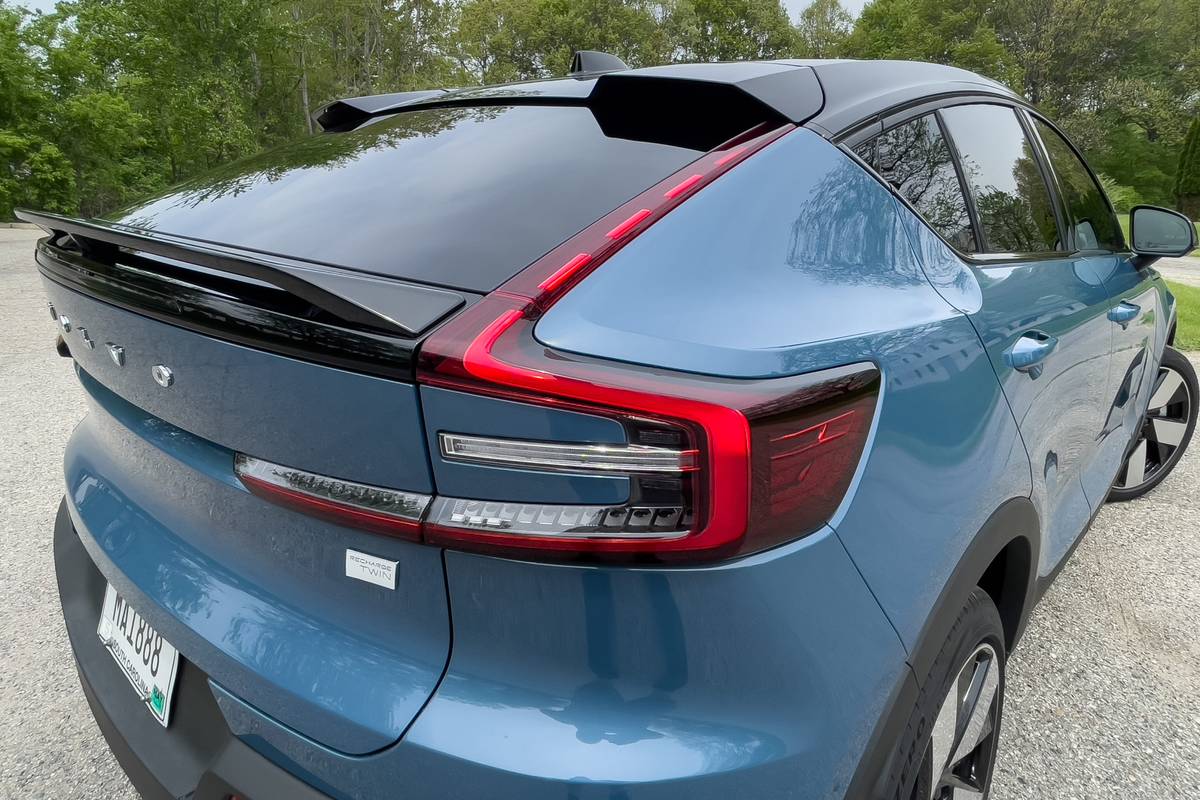 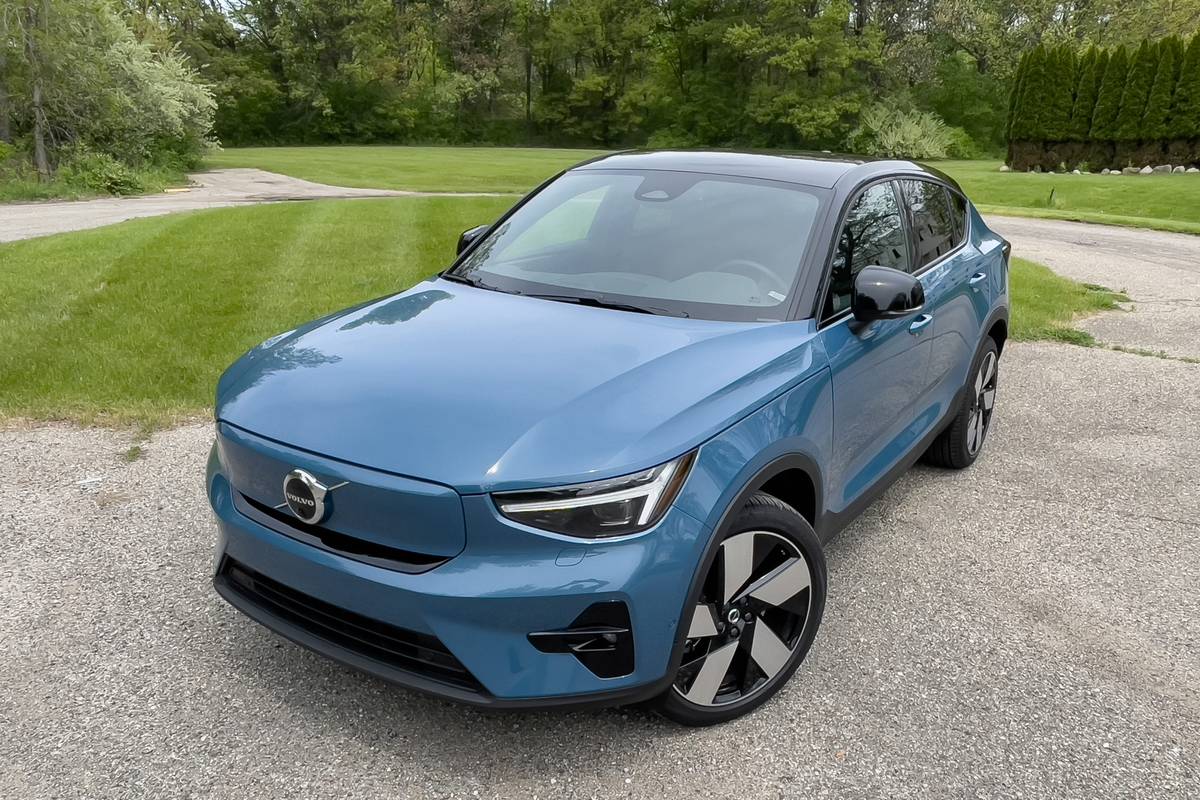 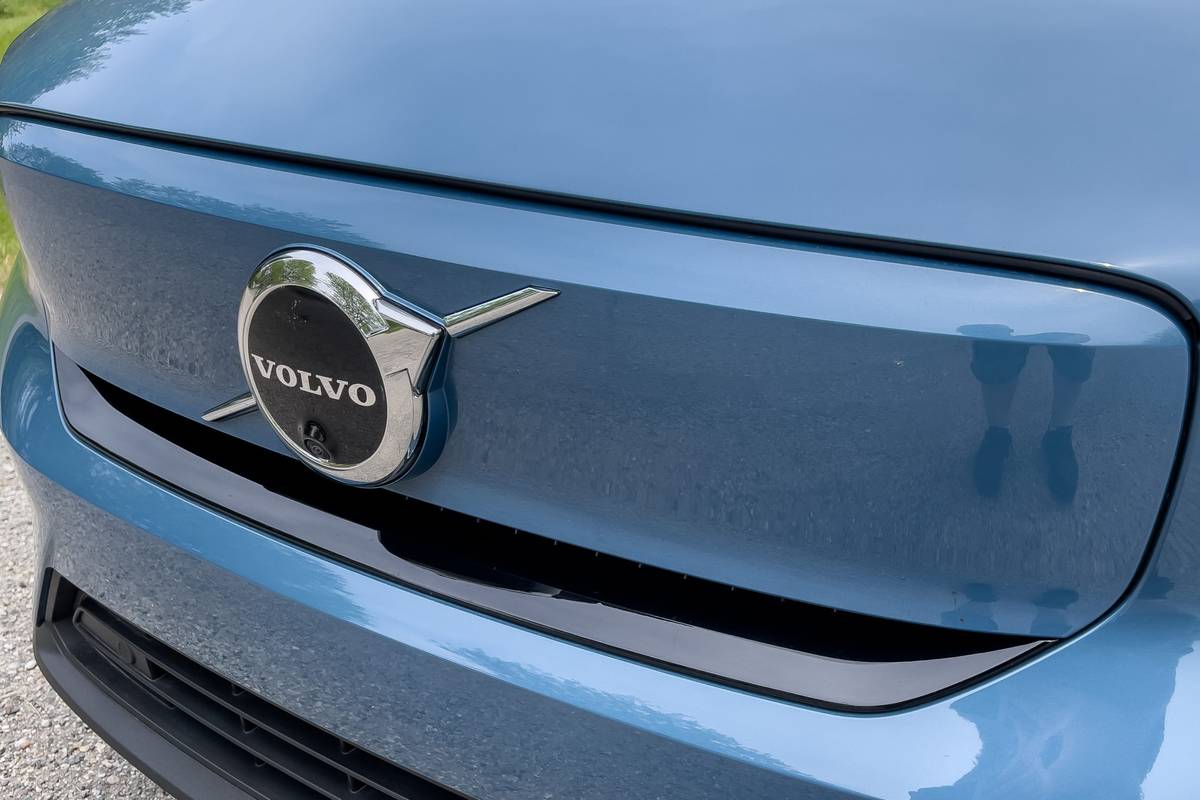 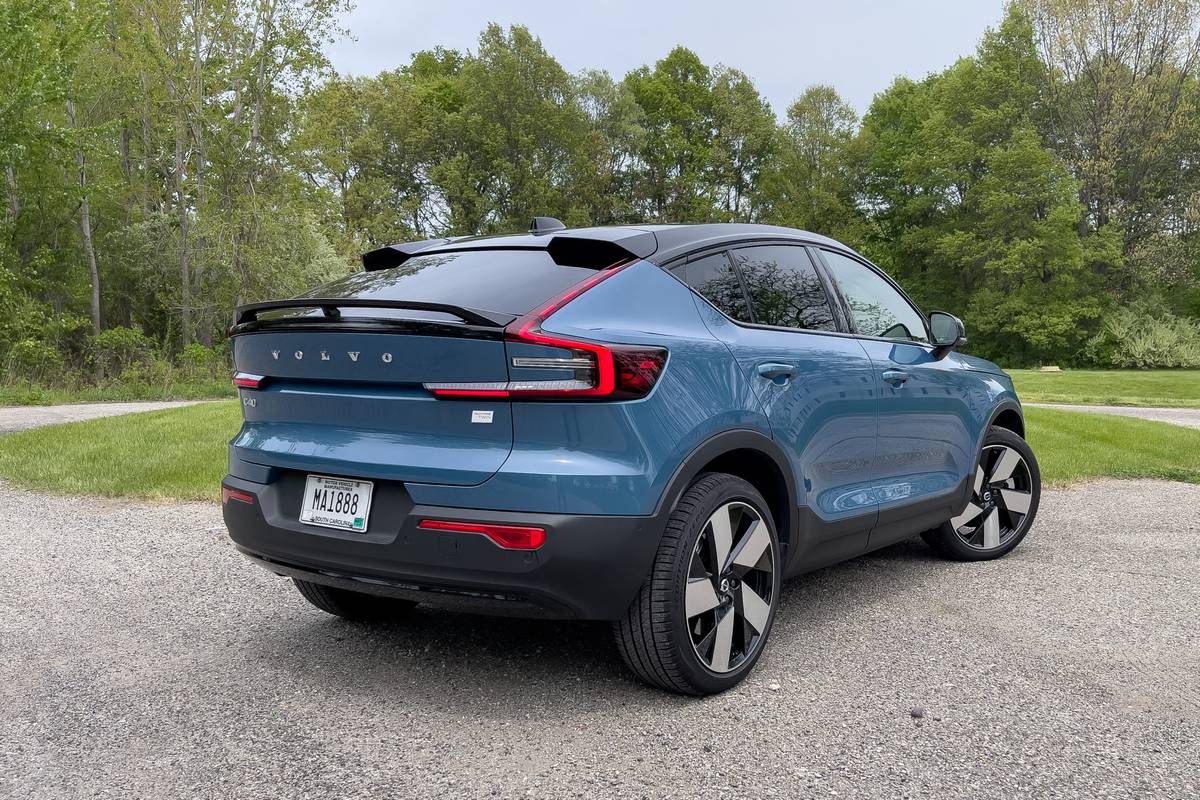 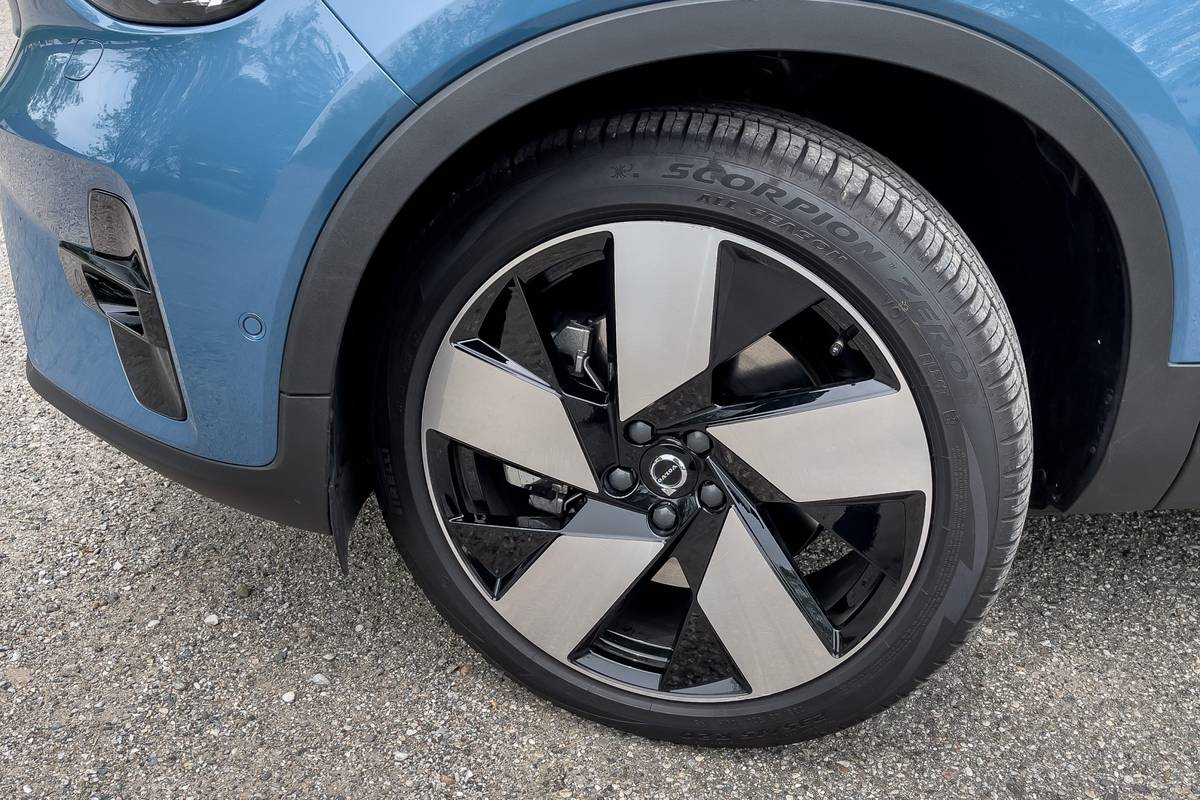 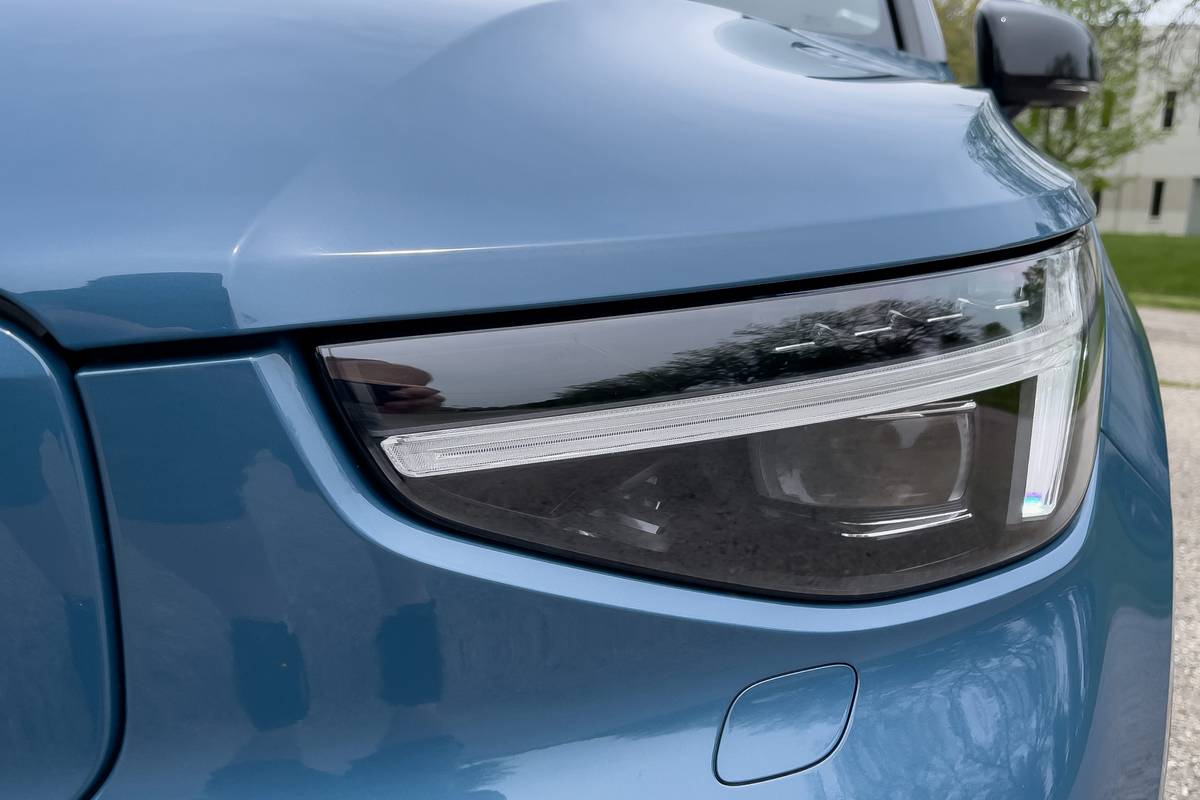 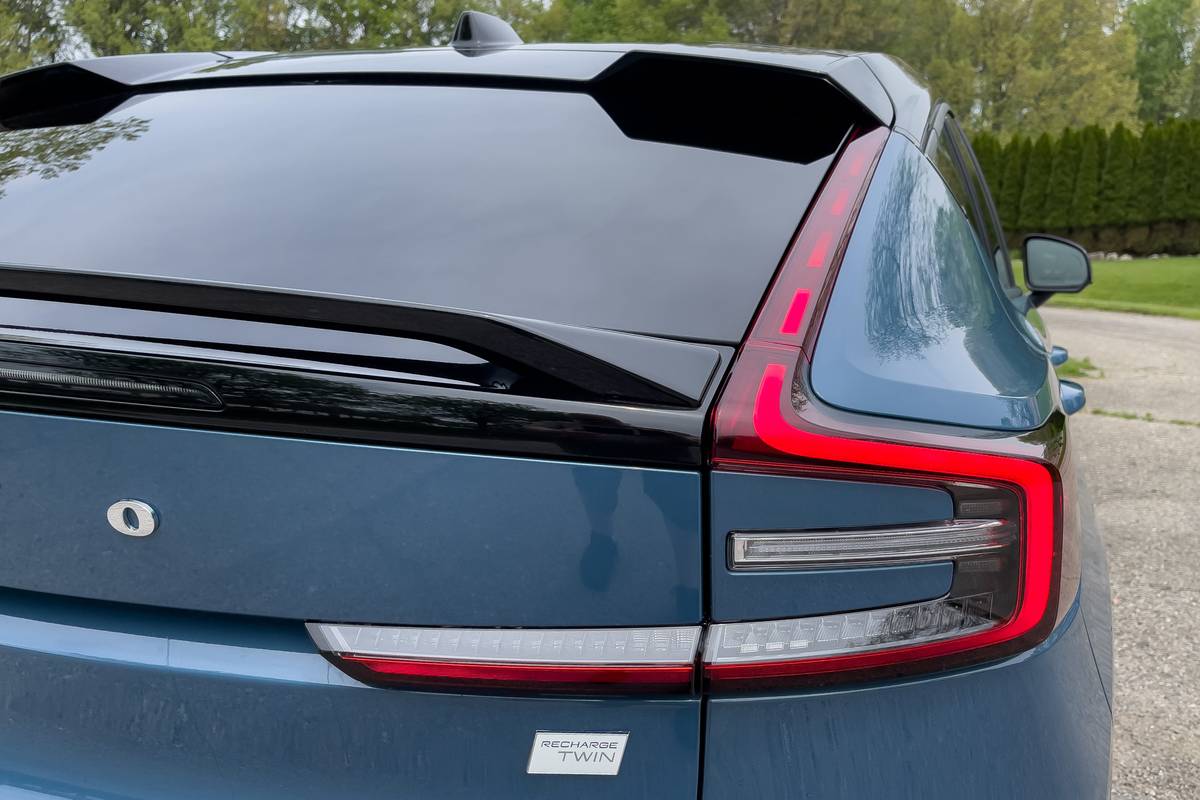 Compromises of a ‘Coupeover’ SUV

There’s really no way around this: The notion of taking an SUV and shaving its top to make a lower, less-useful version — which is somehow regarded as more stylish — just doesn’t work. It didn’t work for the BMW X4 and X6, the Mercedes-Benz GLC and GLE Coupes, or the Infiniti QX55, and it doesn’t work for the C40 Recharge. The problem is that these “coupeovers” simply require too many compromises — and command higher prices for the privilege.

Volvo did an admirable job on the C40 Recharge’s styling, with some interesting taillights that stretch up into the rear D-pillars. From the inside, however, the coupeover styling has removed any semblance of rear visibility from the driver’s seat. Even with the driver’s seat set as low as it can go, you cannot see the horizon line in the rearview mirror. In fact, you can’t see anything but the lower bumper of the car behind you if it’s less than 100 feet away. Beyond that distance, you really can’t see anything at all; you’ll be checking your side mirrors more than your rearview mirror to see what’s behind you.

Combine the lack of rear visibility with a rising beltline that creates massive blind spots in the rear three-quarter view, plus the lack of a rear window wiper, and the view behind you is simply unacceptable. There are no such issues in the XC40 Recharge, thanks to its upright SUV styling. It maintains its utility in terms of both outward visibility and cargo space (another coupeover casualty), making it a much easier vehicle to drive. Such compromises to the C40’s outward visibility and utility — in exchange for perceived style — might be acceptable to some, but I find they make for a vehicle that’s highly awkward and unpleasant to operate. 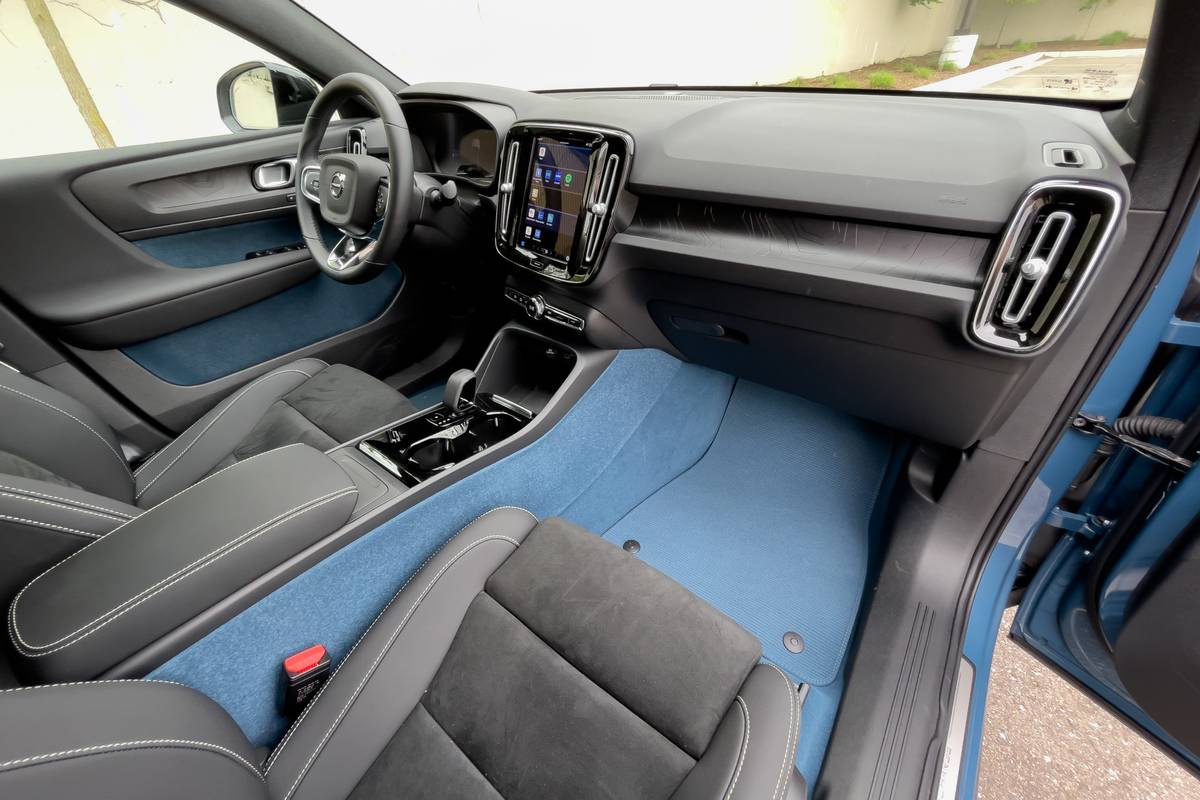 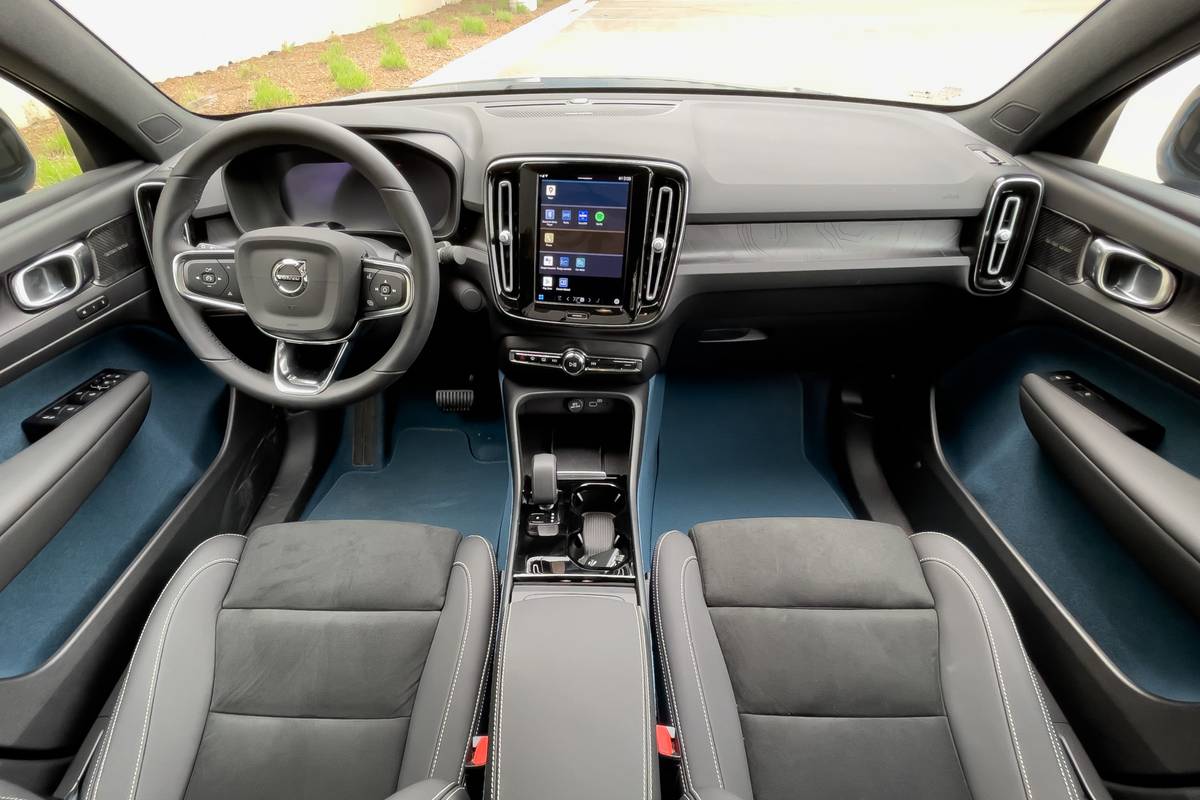 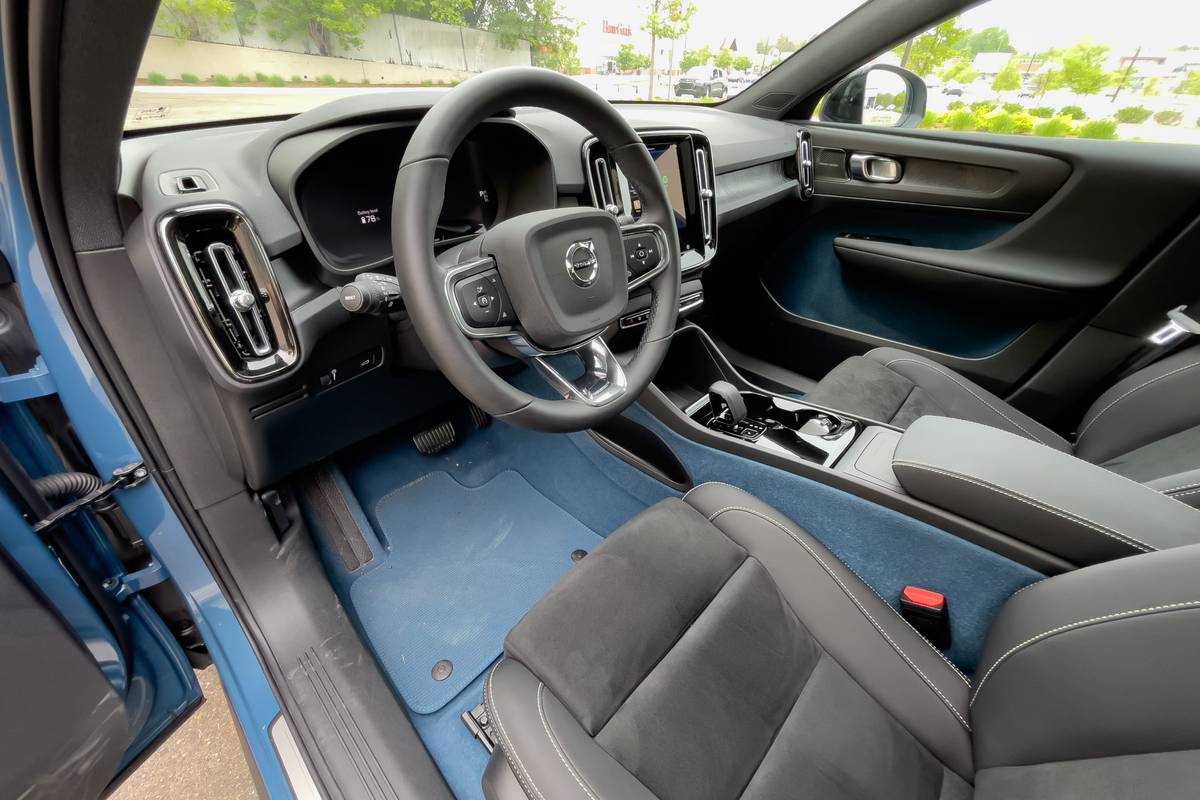 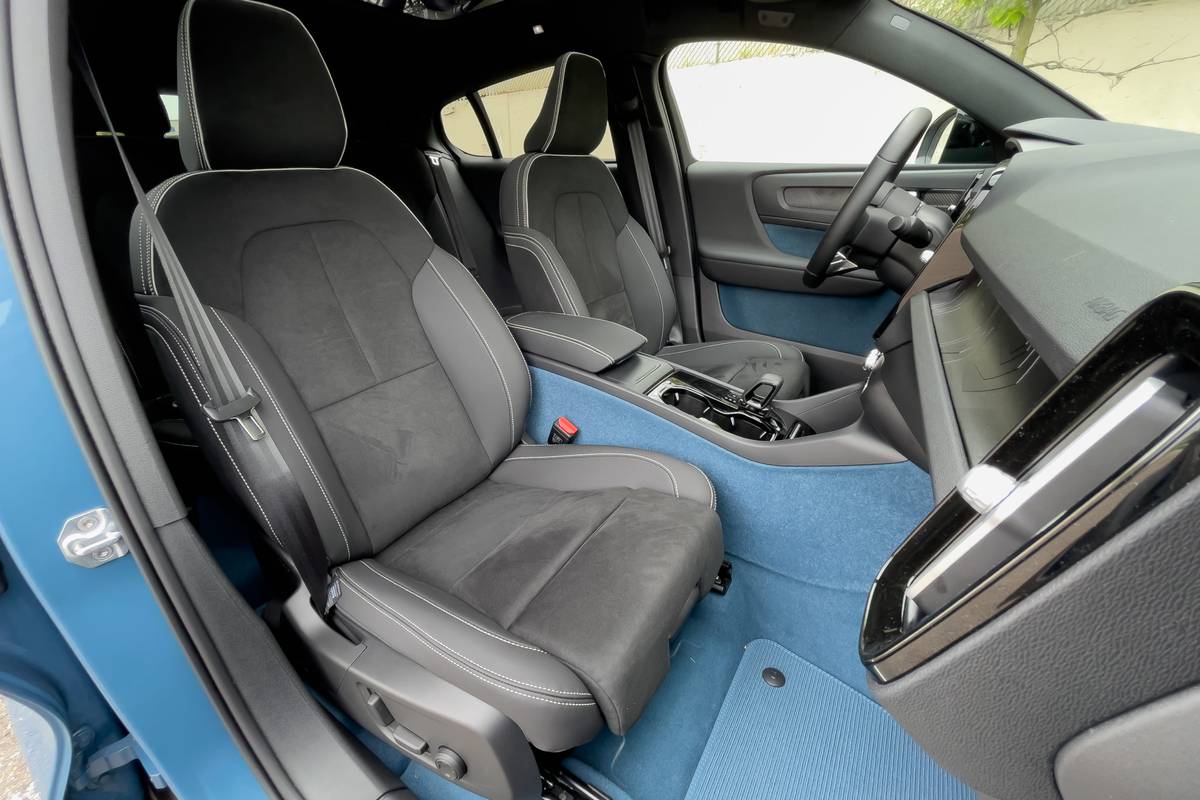 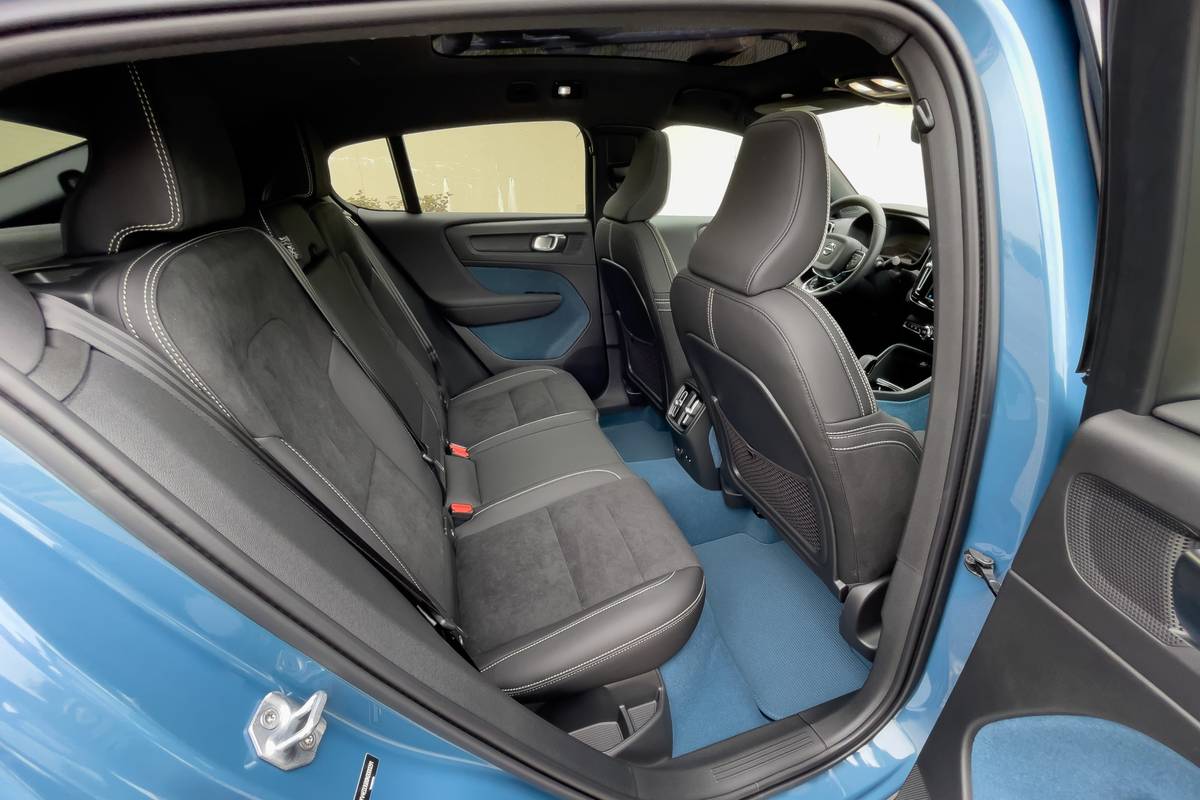 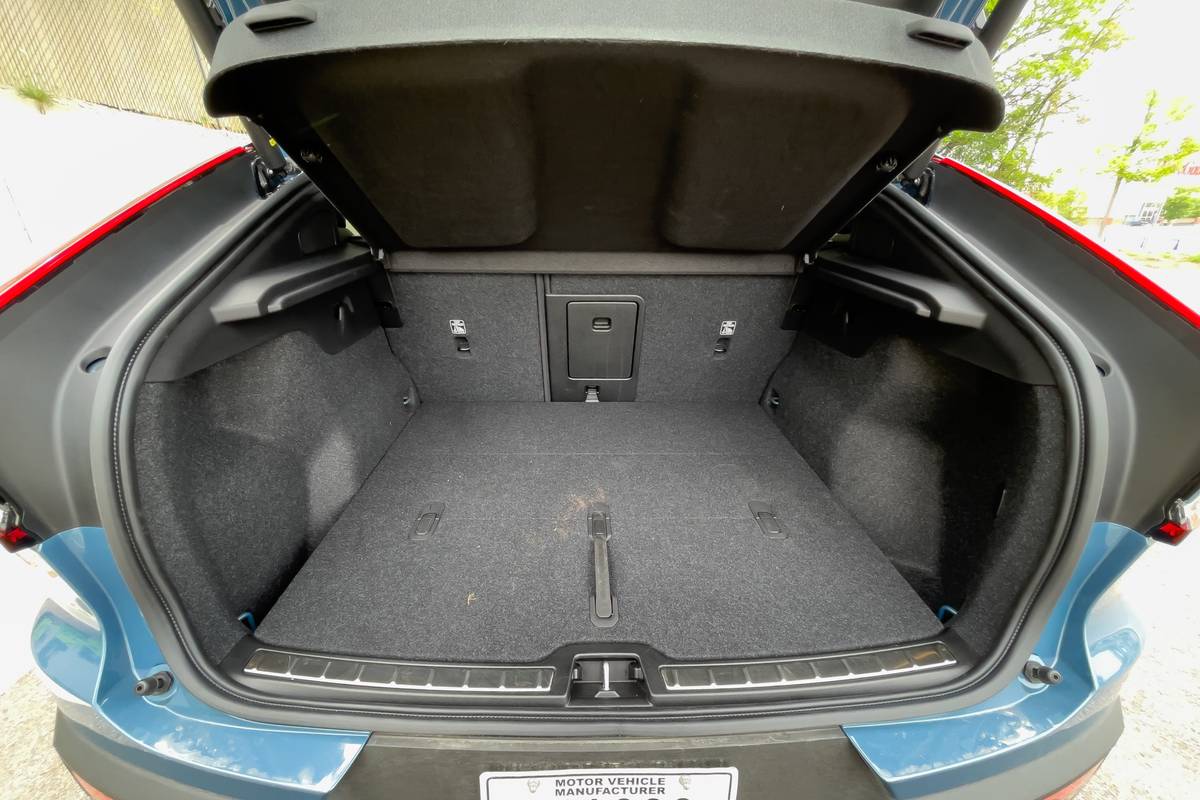 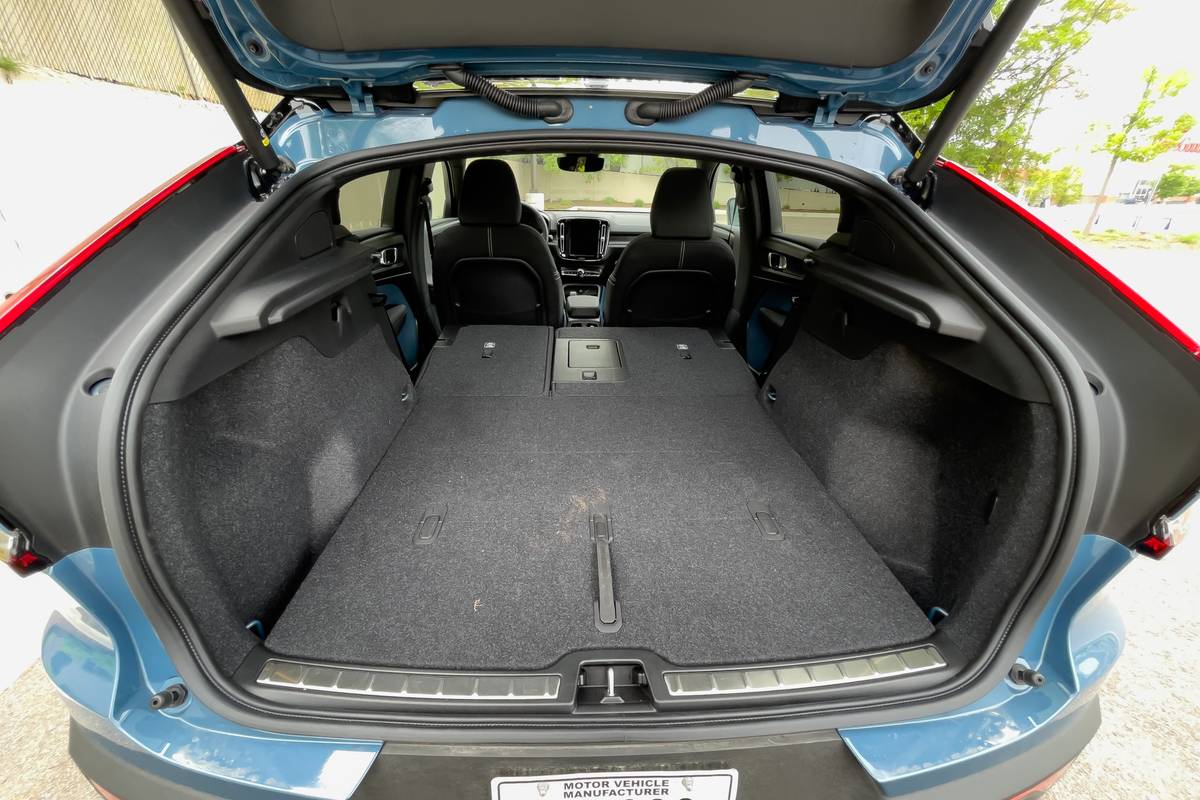 One would hope the driving characteristics of the C40 Recharge would make up for its styling and visibility compromises, and they do to some extent. The C40 has a twin-motor system, with one motor on each axle for standard all-wheel drive. They generate 402 combined horsepower and 487 pounds-feet of torque — but it honestly doesn’t feel like it.

Volvo says the C40 Recharge can do 0-60 mph in 4.7 seconds, but it’s tuned more for lazy, efficient acceleration; you don’t get the full fury of all that electric grunt unless you really plant the accelerator to the floor. There’s no “sport” mode, either, so the car’s dynamics are its dynamics; all you can adjust are the steering feel and feedback (normal or sporty) and the aggressiveness of the regenerative braking. In that department, your choices are either “none at all” or “too aggressive,” it seems. One-pedal driving mode dramatically curtails forward motion when you lift off the accelerator, making passengers’ heads bob. When you switch this mode off, the brakes themselves aren’t very communicative, feeling more mushy and soft than firm and progressive.

Handling is similarly tuned toward ease and comfort more than sporting pretense. Steering feel and feedback is electronically adjustable, and it can be set between normal and sport for a firmer feel and quicker response. Dialing toward sport, however, tends to make the C40 Recharge darty on the highway and in strong crosswinds.

Ride quality is a highlight of the C40, with bumps and pavement imperfections largely smoothed out without much fuss. You will, however, hear that happening, as wind and road noise is surprisingly high — perhaps simply a result of not having any powertrain noise to mask ambient sound. Overall, the driving dynamics of the C40 don’t quite match up to the promise of the car’s sporty pretense. It’s an EV tuned more for efficiency, with occasional blasts of speed, than for sport. Treat it as such, and you won’t be all that disappointed.

The car’s range is another thing about it that’s just average: It’s rated to have 226 miles of range by the EPA. It has a standard 78-kilowatt-hour battery and DC fast-charging capability that Volvo says allows it to go from a 10% charge to 80% in about 28 minutes. My own experience with this at a 150-kilowatt Electrify America charger took the C40 Recharge from 10%-80% in 36 minutes, with an observed peak charging rate of 140 kW that dropped steadily over those 36 minutes. Obtaining a full charge at home on a dedicated 240-volt Level 2 charger should take about 7-8 hours at 11 kW, or nearly two days if you plug it into a standard 120-volt outlet.

Sing the Body Style Electric: A Look at the Latest EV Concepts 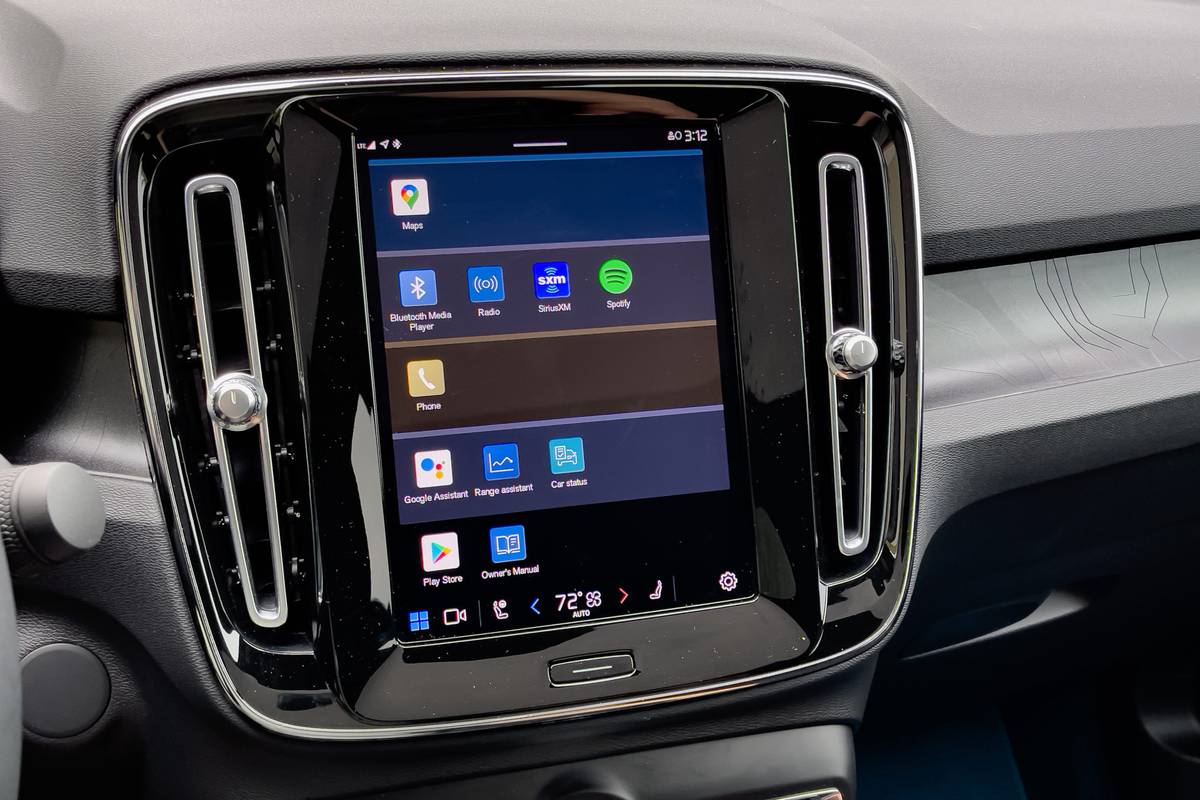 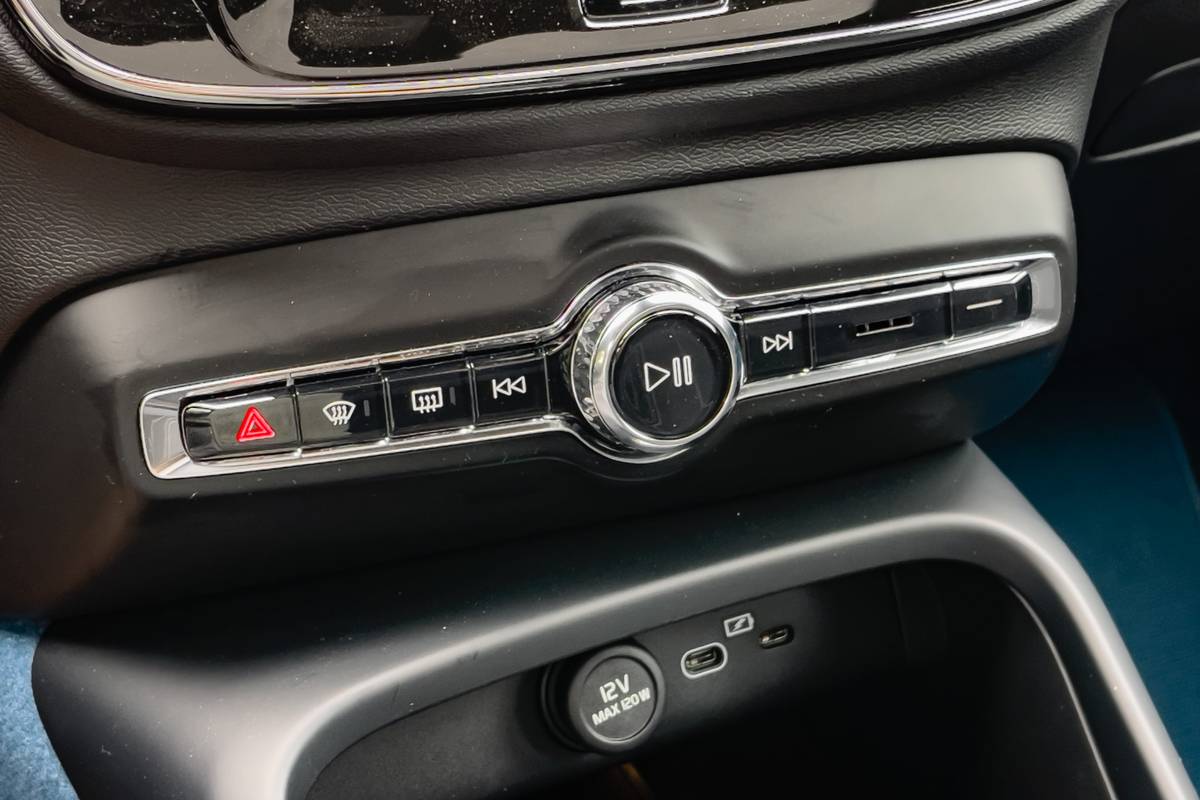 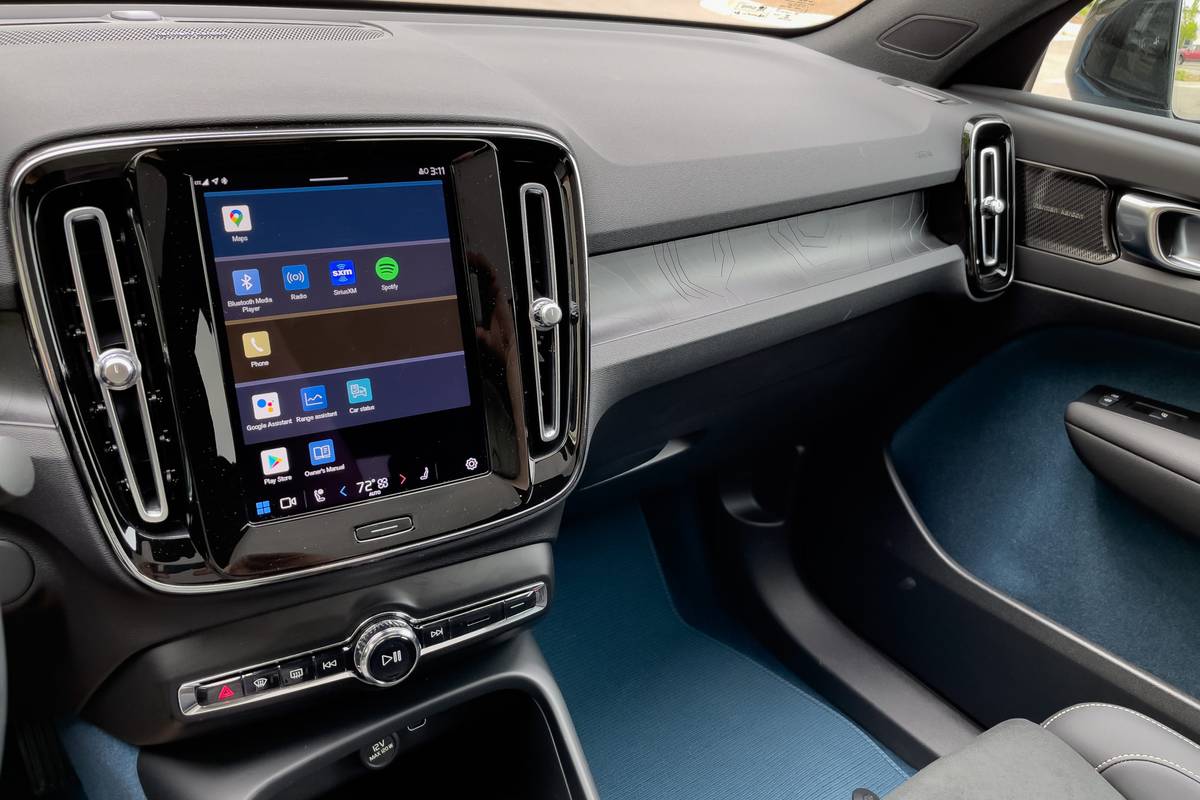 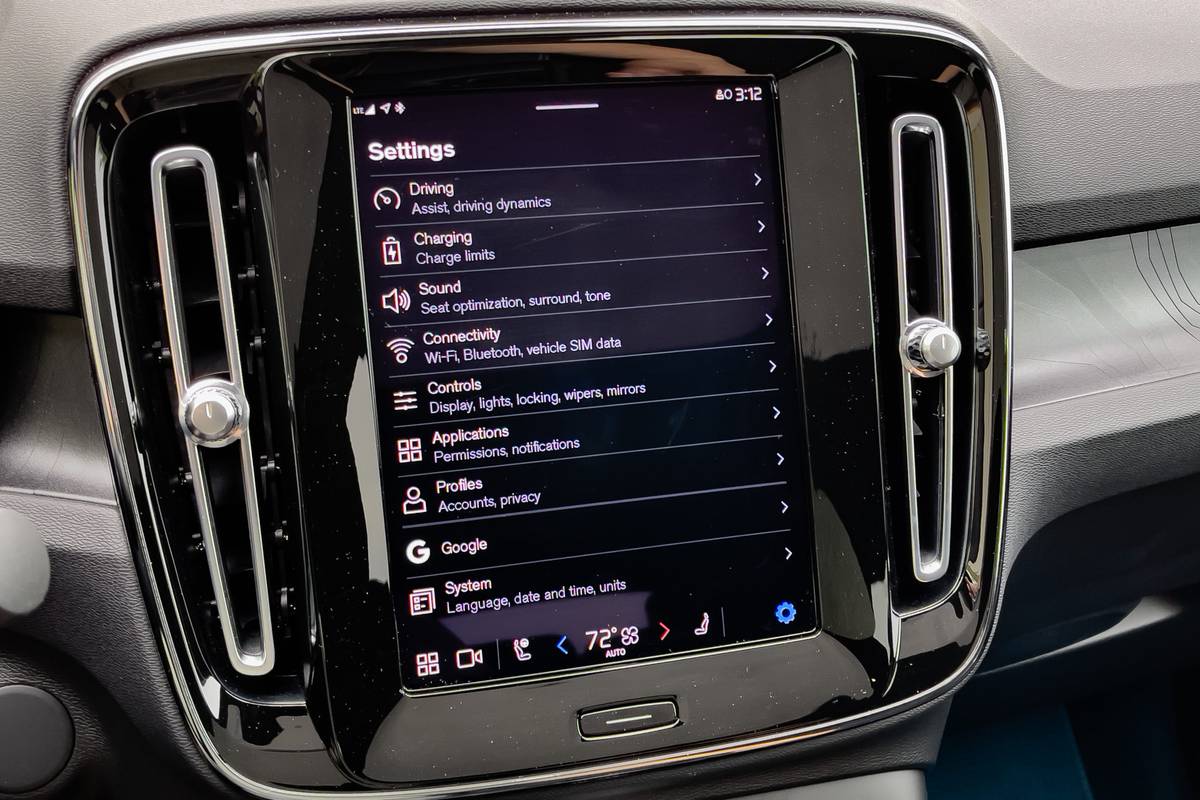 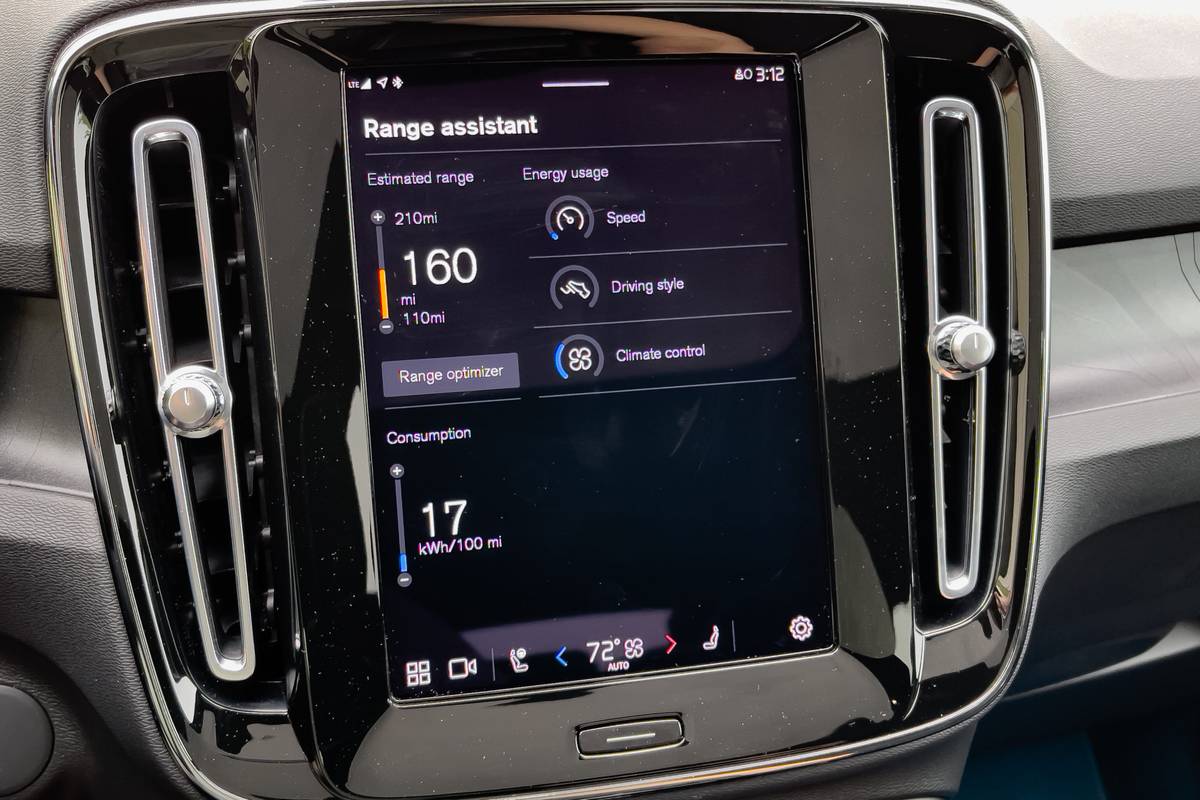 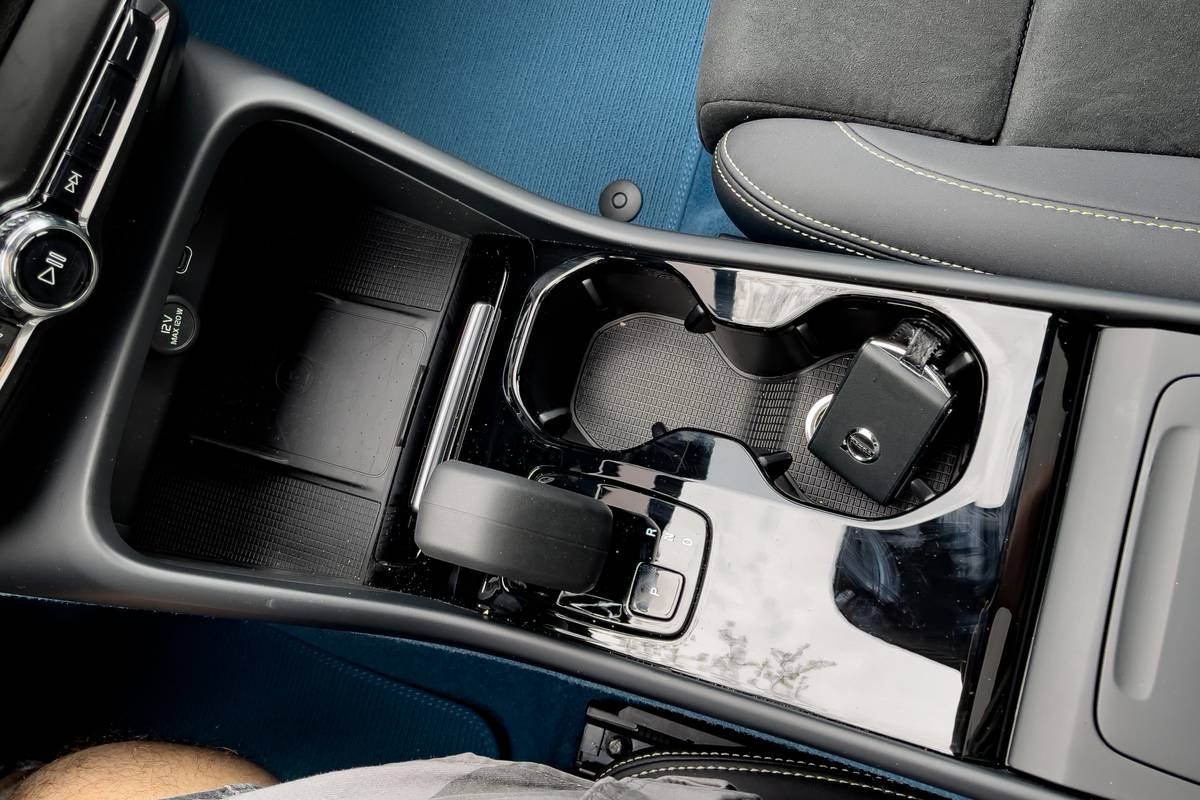 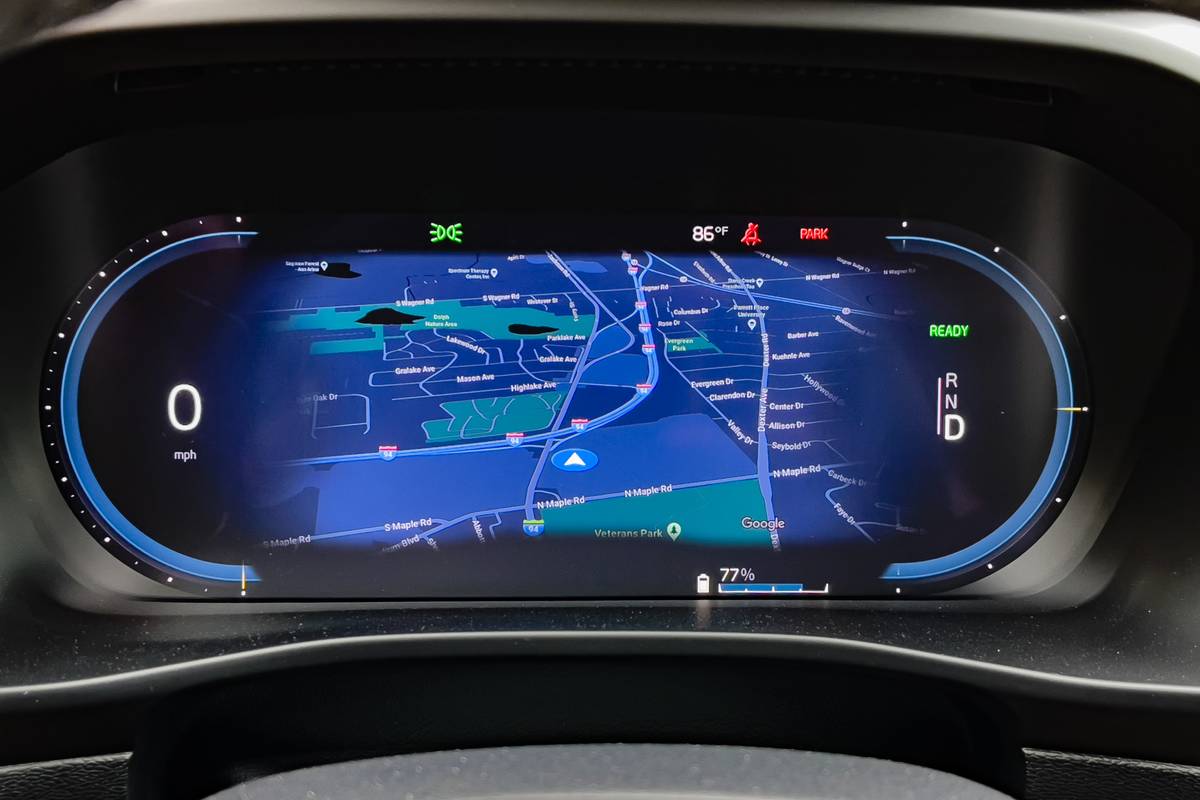 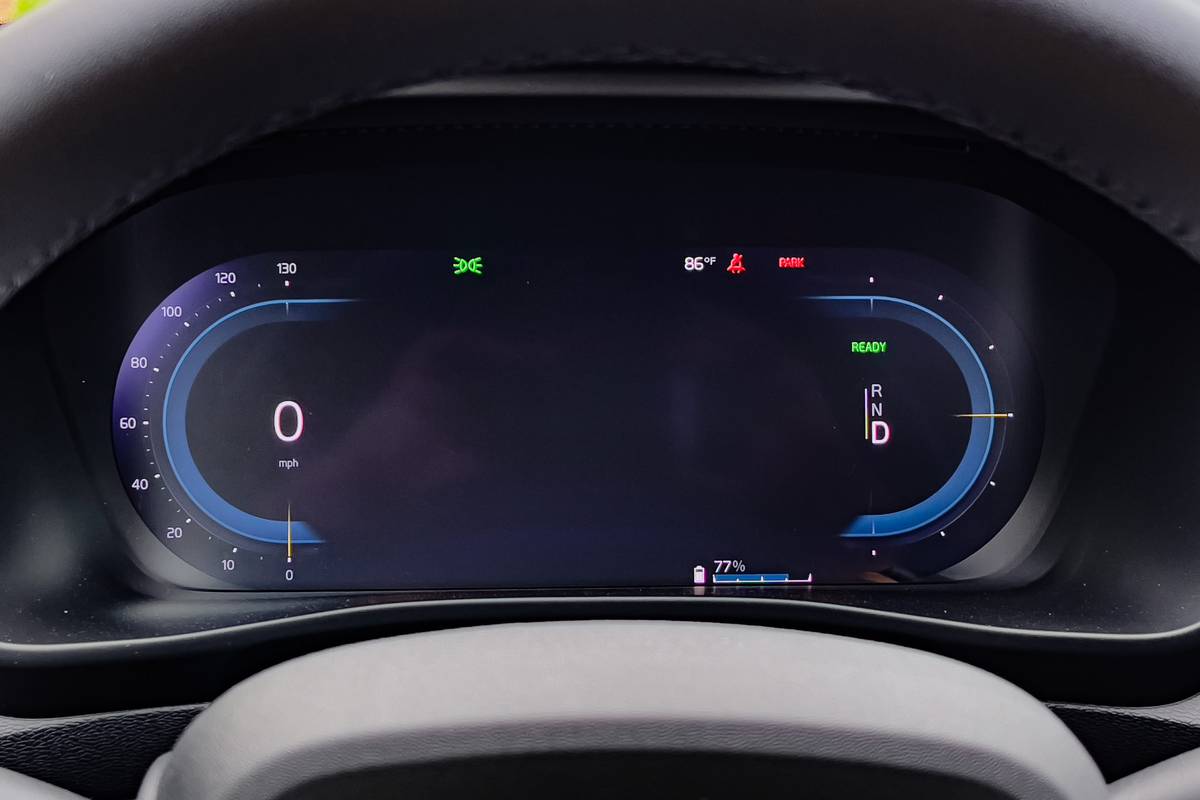 Volvo Quality Inside, But Electronics Disappoint

Yes, the C40 Recharge is only average in its operation, and it features some serious compromises in its construction, but what Volvo did well with the car is its interior design, packaging and comfort. The dash looks nearly identical to the XC40’s, with the exception of some really novel textured trim bits that turn translucent at night thanks to some classy backlighting effects. The seats are Scandinavian firm but long-term comfortable in both rows.

You’ll need to duck your head to get into the backseat thanks to that swoopy roofline, and headroom isn’t all that fantastic for backseat passengers, but they will have sufficient legroom. Everything is screwed together well, and materials quality is far superior to anything in a Tesla. With the C40, you’ll pay a premium for an EV with a luxury-brand badge on its hood, but at least Volvo doesn’t make you question that decision when you’re seated inside it.

Of course, once you start using the interior electronics those questions will pop up again. The digital gauge cluster is almost inexcusably bland and devoid of functionality; it can’t even display the current media track or radio station. The multimedia system operates on a Google OS, and there were several functions that simply didn’t work in my test vehicle, like using voice commands to change the radio station. The system also lags badly when trying to access things like navigation, which is now Google Maps. My test car didn’t have Apple CarPlay, but Volvo added it as an over-the-air update in late July.

As good as the interior looks, this new digital operating system is a serious letdown; it doesn’t seem to have the functionality of the native Volvo system. The gauge cluster is boring and overly simple, especially for a dedicated EV — but perhaps that’s what Volvo was aiming for: to disguise this dedicated EV as an ordinary car for people who would rather drive something more traditional.

Worthwhile or Worth Skipping?

The Volvo C40 Recharge is a comfortable around-town runabout that requires some serious compromises, but its biggest issue just might be its competition. There are several EVs in the same category as the C40 Recharge that are bigger, more comfortable and more spacious. They have longer ranges and faster recharge times, and their interiors boast far more features and functions. If you can live without a luxury badge in exchange for a longer range and faster charging, a Hyundai Ioniq 5 or Kia EV6 are both top choices. Audi has perhaps the closest competitor to the C40 Recharge in its Q4 eTron, and it has a longer range at a similar price. It even has its own silly “coupeover” variant: the Q4 eTron Sportback.

Volvo made some unusual decisions with regard to the C40 Recharge, and not all of them add up to a desirable package. In the end, this car will be for drivers who are attracted to its style and are able to overlook the shortcomings of its design and performance.

Sing the Body Style Electric: A Look at the Latest EV Concepts