In the sage words of social satirist Julie Brown in the 1988 science-fiction cinematic masterpiece “Earth Girls Are Easy,” “I like ‘em big and stupid.” And when it comes to SUVs, well, they don’t come any more big ‘n’ stupid than what we have right here: the new 2023 Cadillac Escalade-V. We don’t know why it’s taken Cadillac this long to actually get a V performance version of the Escalade out the door, but they finally have — and you’d better enjoy it now, as it just might be the last new internal-combustion-powered Cadillac you ever see given Caddy’s stated strategy of going fully electric in the next few years. I guess they decided that if they’re going to start sunsetting their gas-powered offerings, why not go out with a bang?

And it’s hard to top the kind of bang you get from this beast, powered as it is by a 682-horsepower, supercharged V-8 engine and swaddled with an ultra-posh cabin. I had several days with the Escalade-V in the urban wilds of Los Angeles motoring around the traffic-choked highways, but I also made sure to take it up into the beautiful canyon roads through Malibu out to the coast, where I could see just how capable this sports truck was at providing an entertaining driving experience. The answer? A resounding yes.

You Wouldn’t Know It to Look at It, But …

The V performance series is what Cadillac uses to designate their high-performance, track-capable models, ones that look only subtly more aggressive but which often possess massive power increases and tons of suspension technology meant to blow the doors off competitors (usually German) on roads and race courses. I’ve had my brain melted behind the wheel of a Cadillac CTS-V, been mightily impressed with the latest CT4-V and CT5-V Blackwings, and now I’ve experienced what Cadillac has wrought in their big daddy SUV, the Escalade-V.

Looking at it, there’s not much to distinguish it as something special — it looks pretty much like an Escalade in the Sport Platinum trim, with big wheels, a slightly lower stance, and blacked-out and body-color trim instead of chrome. The only unique features seem to be the subtle V badging on the doors, and slightly different front and rear bumpers, all of which is easily overlooked. The Escalade-V is apparently meant to fly under the visual radar of passersby, and it does so successfully … until you put your foot down. 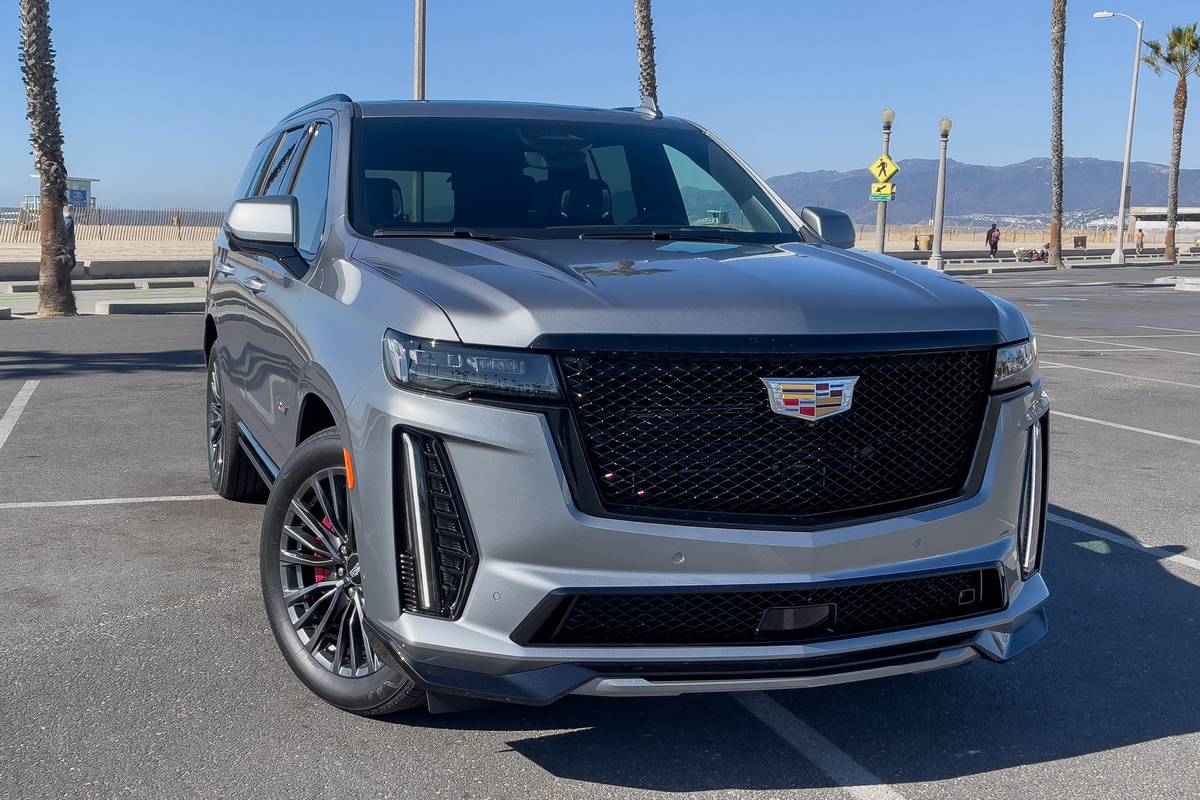 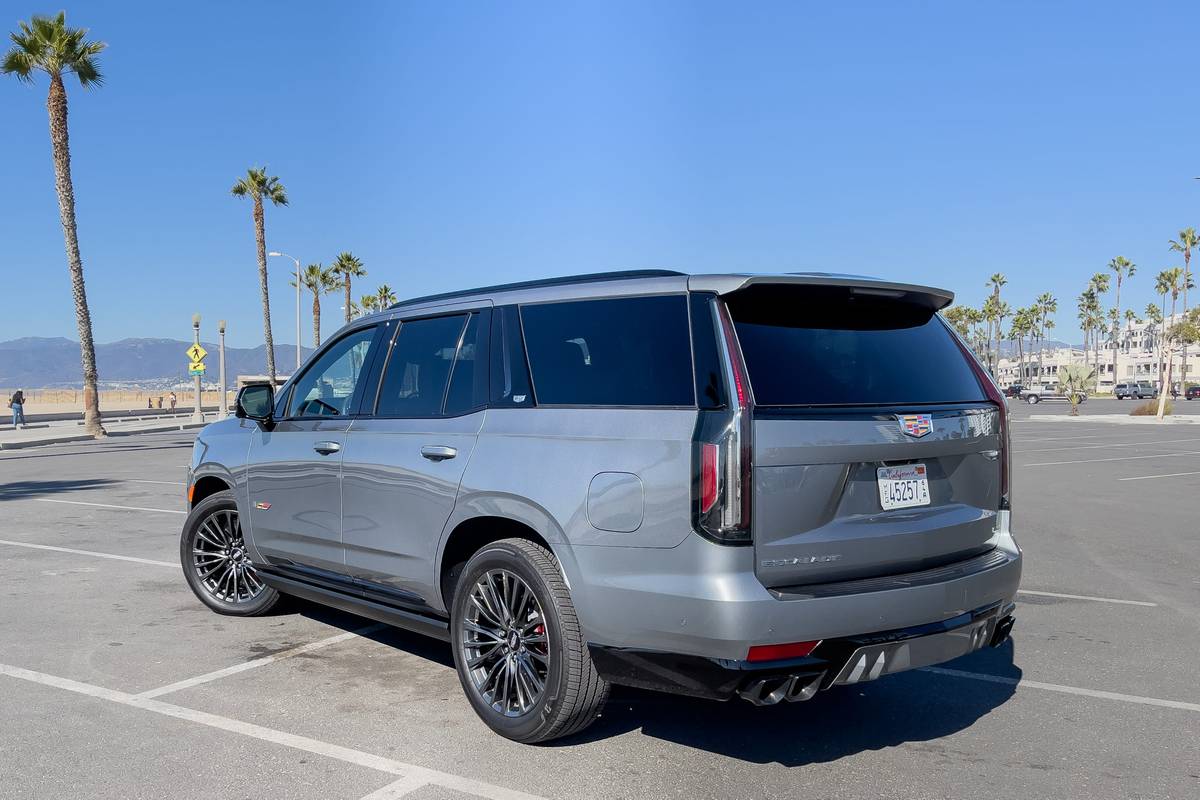 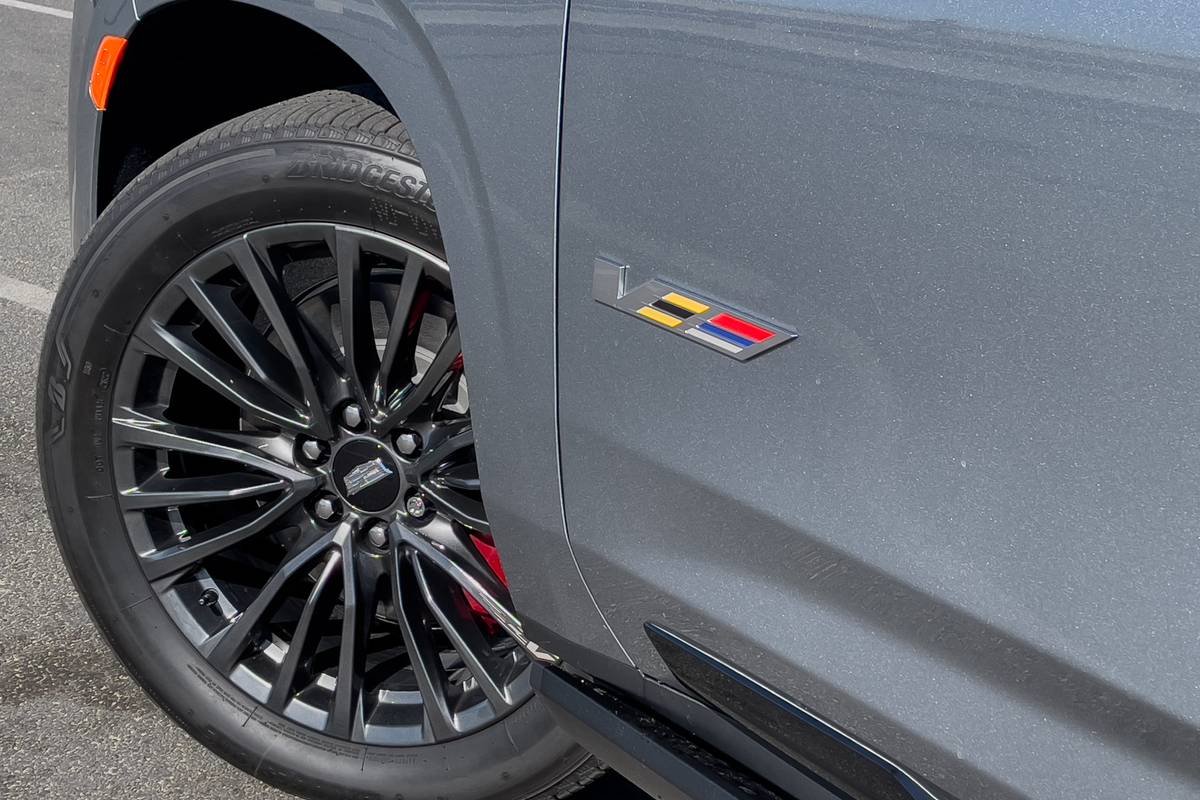 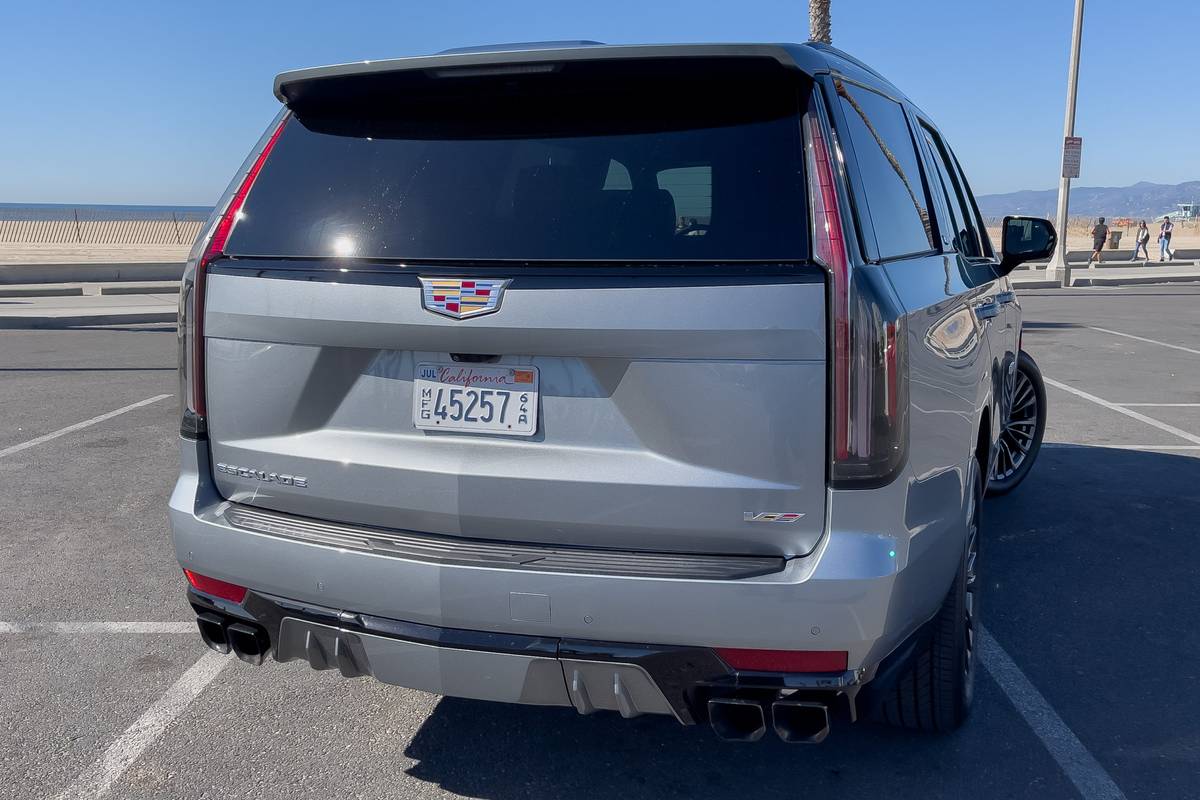 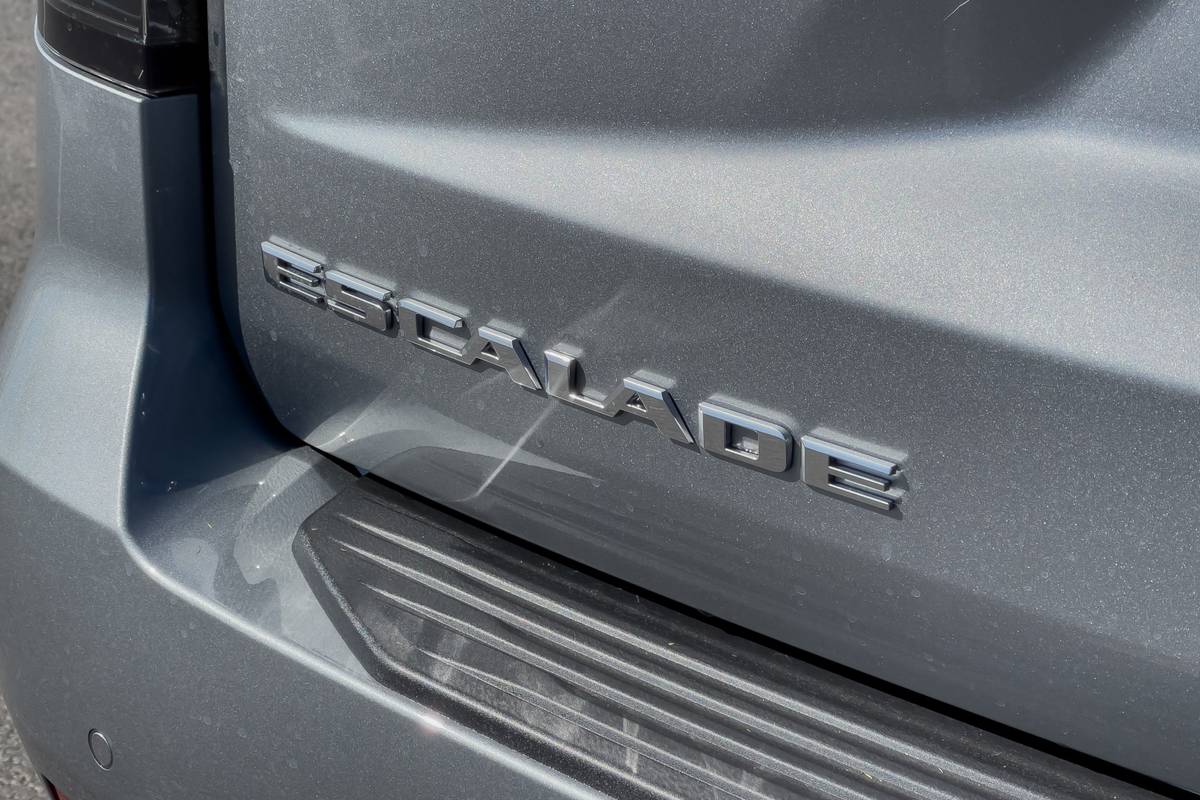 Nestled under the long hood of the Escalade-V is a hand-built, supercharged 6.2-liter V-8 engine that’s related to the one found in the CT5-V Blackwing sedan, though it features a larger supercharger. In the Escalade-V, it produces a whopping 682 hp and 653 pounds-feet of torque, a bit more than the 668 hp the CT5-V Blackwing makes but slightly less than the sedan’s 659 pounds-feet of torque. But what accompanies the Escalade-V’s power is “the roar” — the earth-shaking basso profundo bellow that the thing produces on startup (especially when it’s cold) that will make you leap out of your skin when you remote-start it in an airport parking garage; that’s good for a thousand laughs when the valet at the hotel starts it at a busy stand and makes everyone standing behind the beast jump like a bomb went off in the driveway. It’s a noise you just don’t expect from an SUV like this. Your neighbors will immediately begin phoning the local HOA the day after you bring it home. It’s big, stupid fun — and I love it.

Consider that noise fair warning for what this massively powerful engine does for the Escalade, itself a portly boulevard cruiser that was never really meant to be a canyon-carving sports machine or a drag-strip warrior. According to Cadillac, this seven-seat truck-based SUV can rocket from 0-60 mph in less than 4.4 seconds, which is an incredible time for a vehicle this size. Push the button just ahead of the shifter for the configurable V-Mode and you can have all the vehicle settings at their maximum insanity, boosting response for throttle, suspension, shifting, exhaust — all of it. It transforms the Escalade-V from a sedate but rumbly luxury touring SUV into one that, while not exactly what you’d call athletic, is far more capable out on fast and twisty two-lane blacktop.

Acceleration is fierce, as one might expect, but it comes on in a smooth rush — there’s no gut punch like you get in some electric vehicles, but it’s still a hang-on-for-dear-life experience for you and your passengers. Braking is also extremely strong thanks to six-piston Brembo front brakes that haul you down with firmness and alacrity, and they do so time and again despite how hard you’re mashing them before approaching a corner. Steering — which is normally numb and light, enabling you to pilot the Escalade through mall parking lots with ease — becomes much more solid and communicative when you push the V button; there’s actual feedback through the steering wheel of what the huge 22-inch wheels and tires are doing, and it’s genuinely enjoyable. You can chuck the big ‘Slade into a long, sweeping corner with aggressive verve, and while it does tend to push and understeer rather dramatically, stabbing the gas will help rotate it and keep it on course.

Is it a sports car level of pure driving enjoyment? Of course not; it’s still an absolutely massive SUV that weighs more than 6,200 pounds (or 6,400 pounds if you opt for the longer ESV version). You still get thrown around in the huge, comfy seats, and the sheer mass of the Escalade cannot be totally hidden regardless of whatever magic the standard Magnetic Ride Control 4.0 and Air Ride adaptive suspension can muster. These systems do a remarkable job of letting the Escalade-V be both a softly riding, beautifully damped luxury SUV and a mostly flat corner carver with noticeably less body roll, but they can only do so much. Suffice it to say that if your commute includes twisty mountain or fast canyon roads between your manse in the hills and the Morton’s steakhouse in the city, an Escalade-V is a massively entertaining way to make that trip. You’ll still be pulling over to the shoulder to let faster motorists in proper sports cars and sportbikes past you, but you’ll be going sufficiently quick to curse the mouth-breathing tourists in front of you who refuse to do so.

The Art and Science Lives on Inside

While the sporting capabilities and aural assault of the Escalade-V are half the equation, the other half of it comprises the opulent cabin that Cadillac has crafted. It’s easily the finest interior the brand has created, with excellent leather (in all three rows), beautiful “zebra wood” trim and comfort for occupants in every seating position. The 36-speaker AKG Studio Reference sound system is mind-blowing, and the absolutely enormous 38-inch curved organic light-emitting diode dash display has super-sharp visuals and reconfigurable controls. 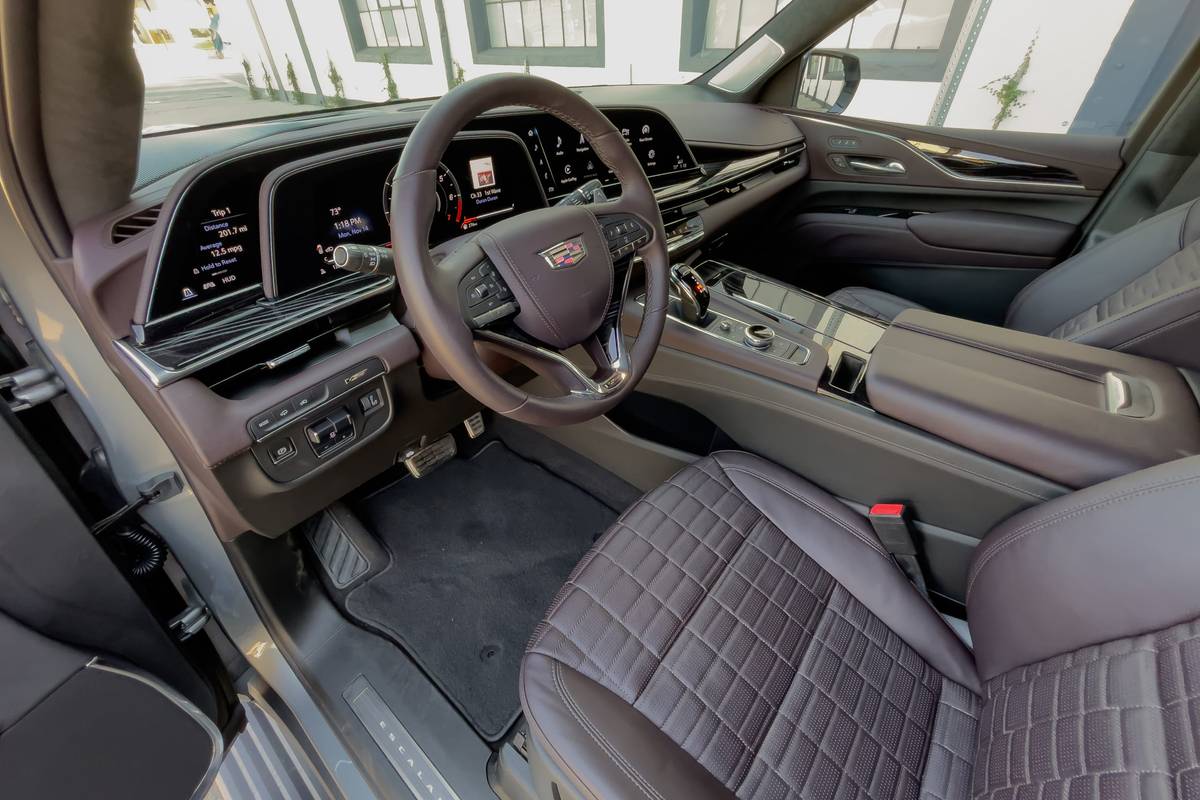 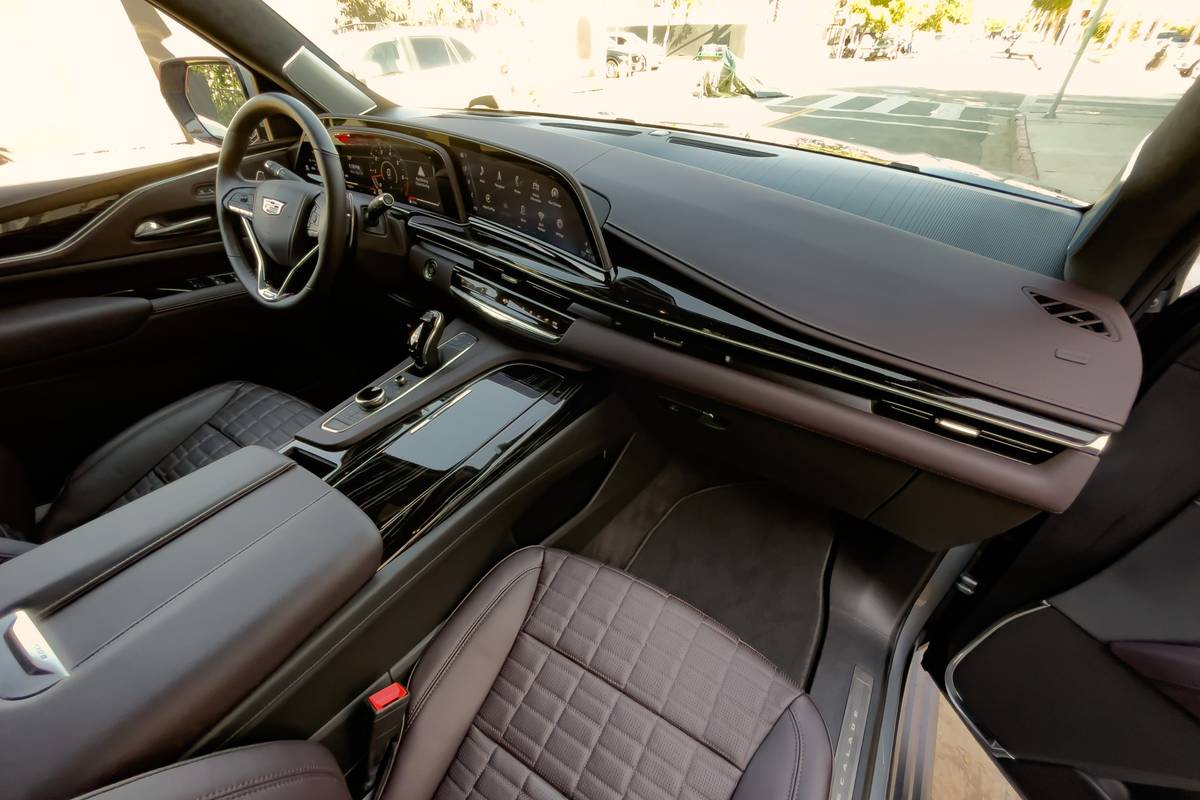 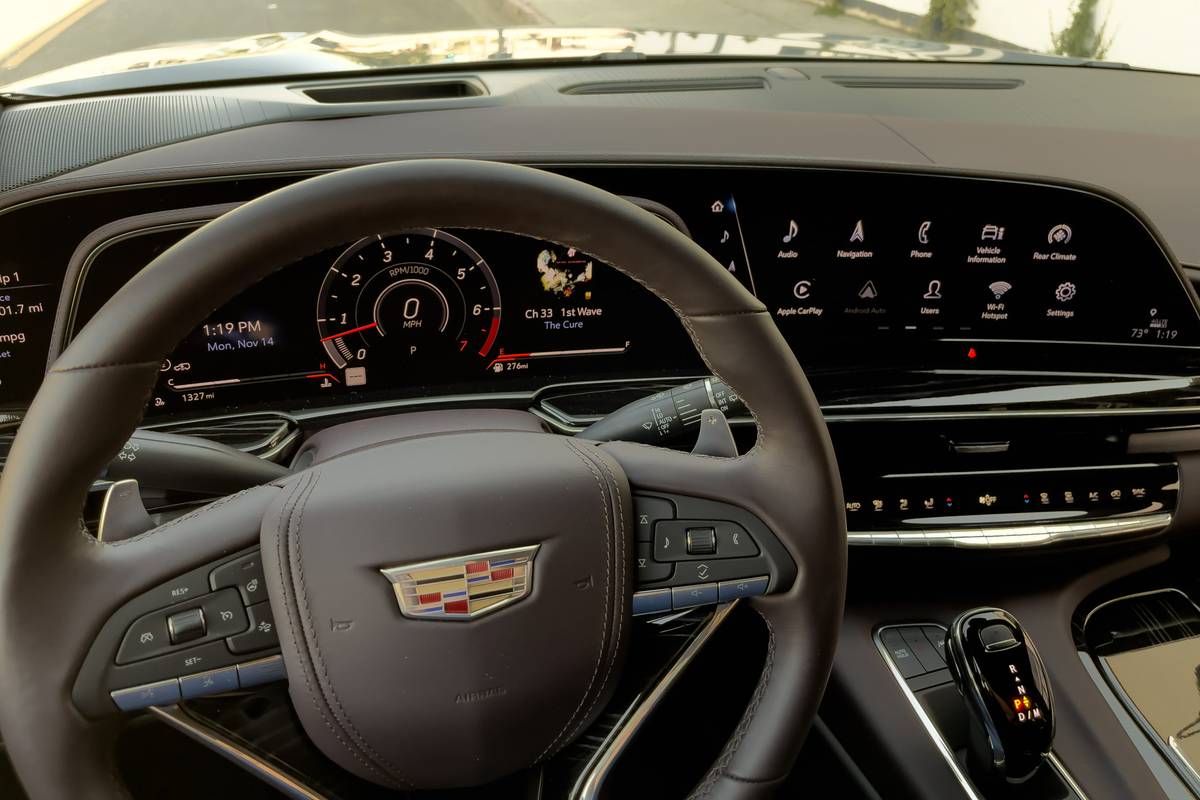 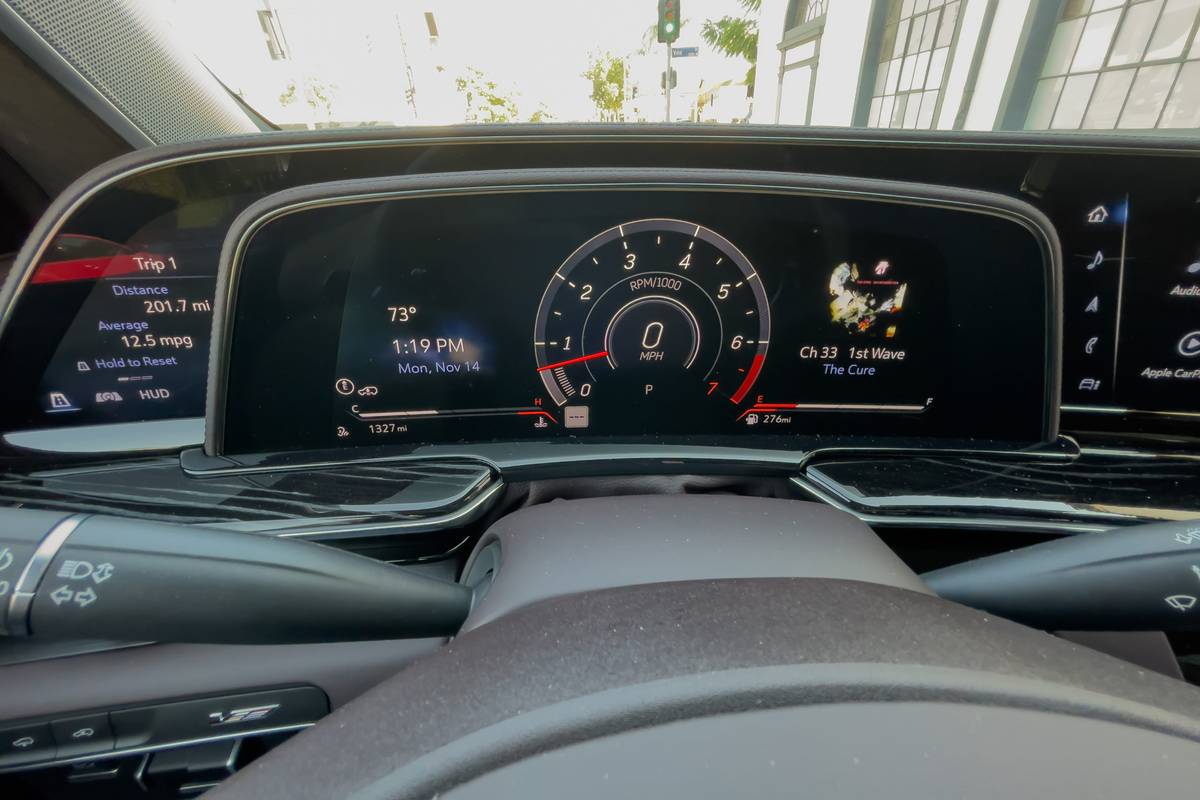 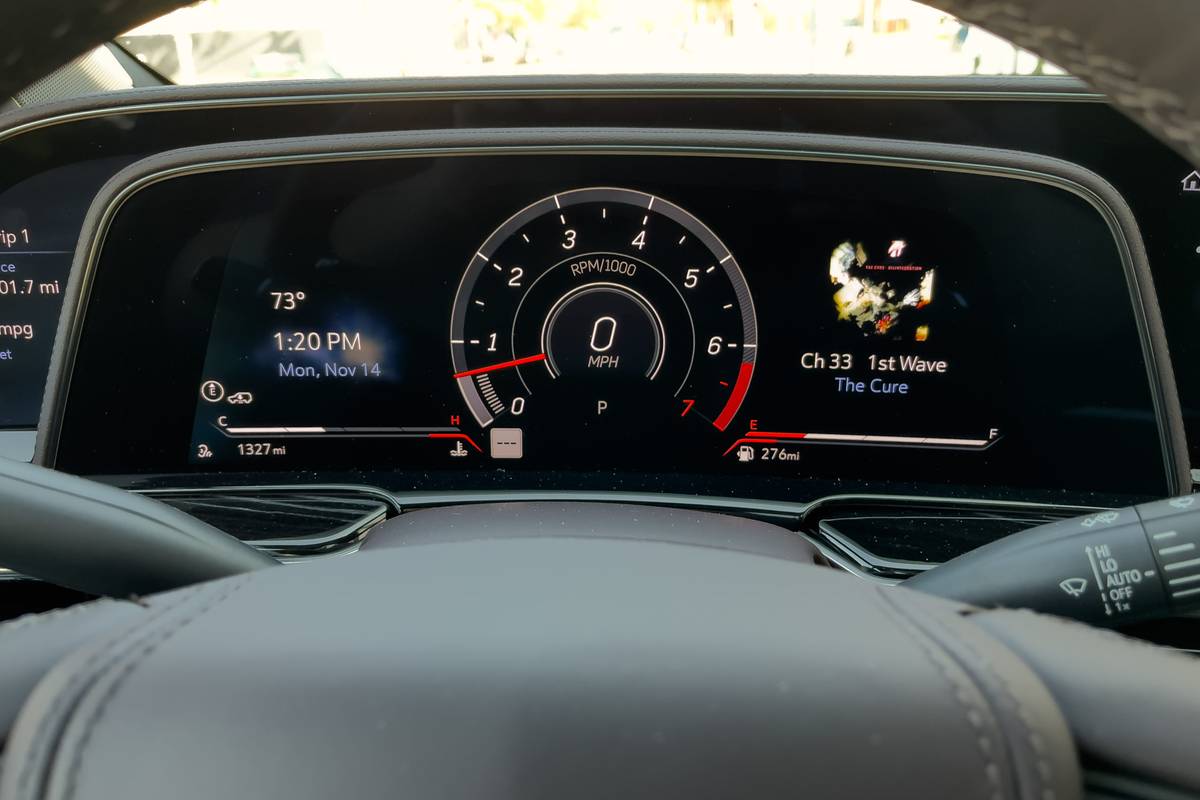 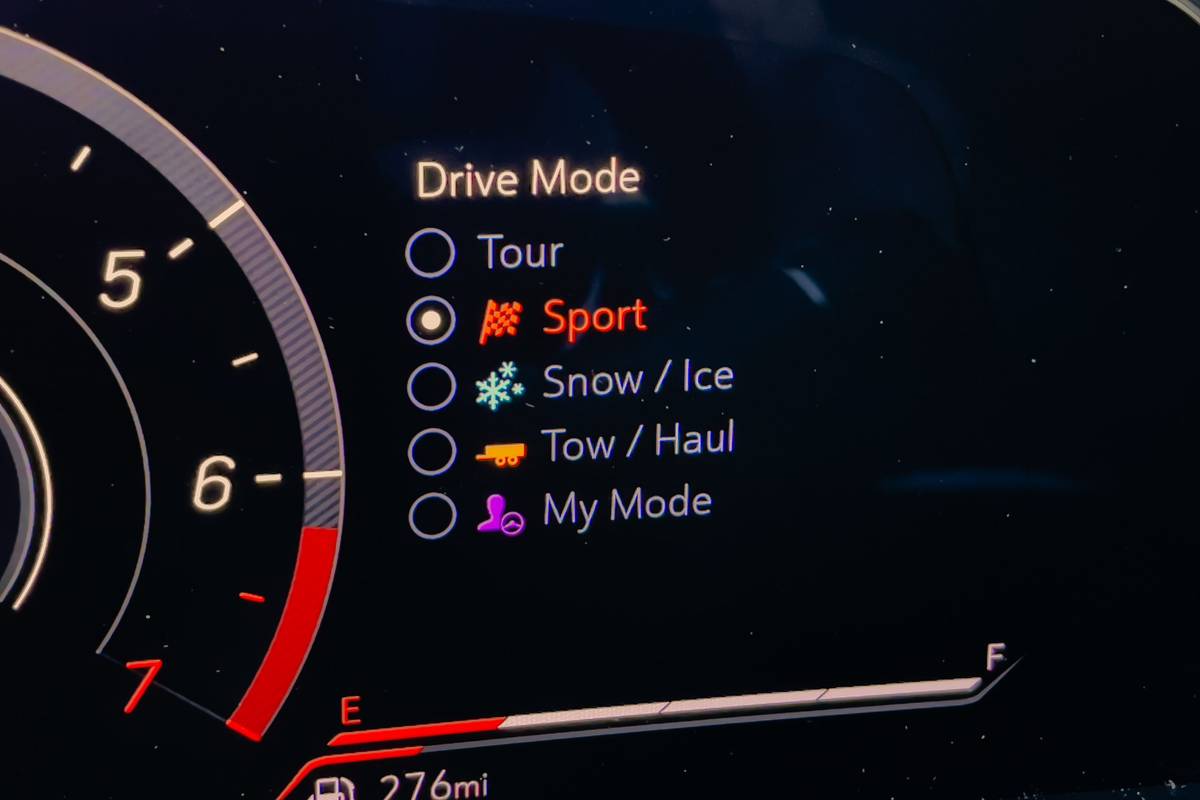 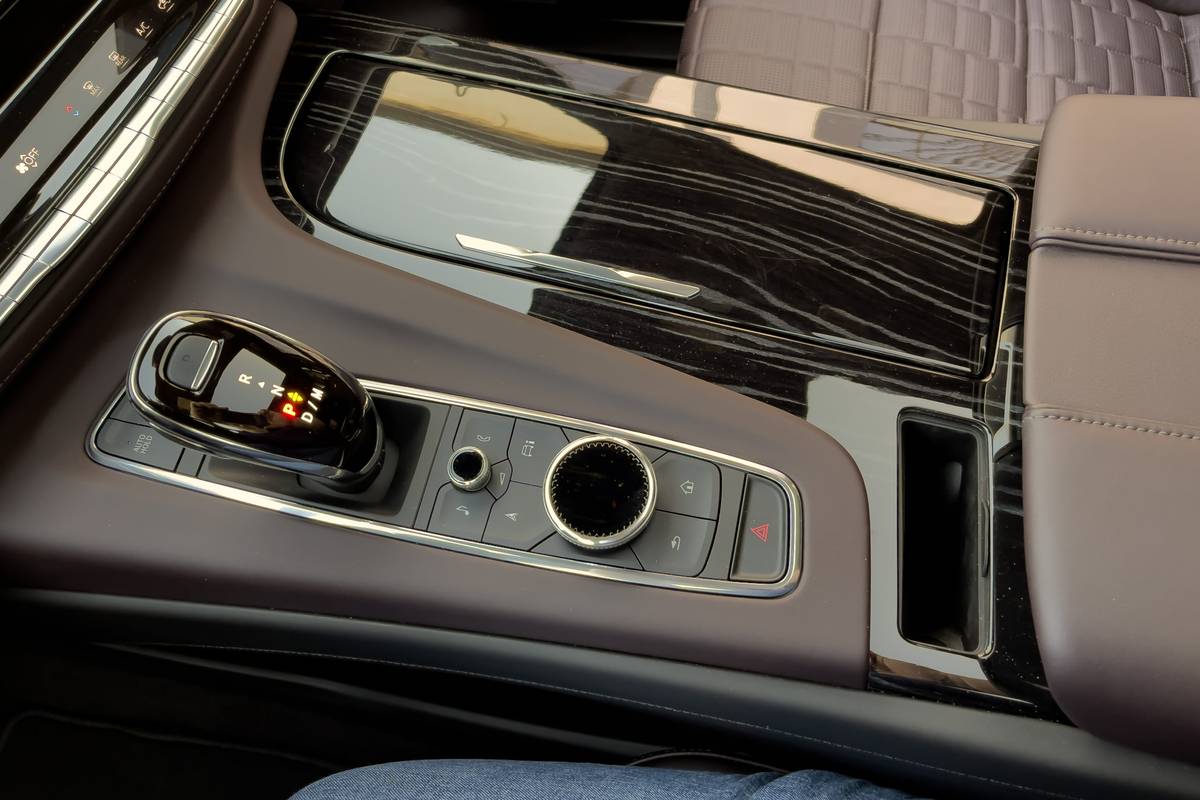 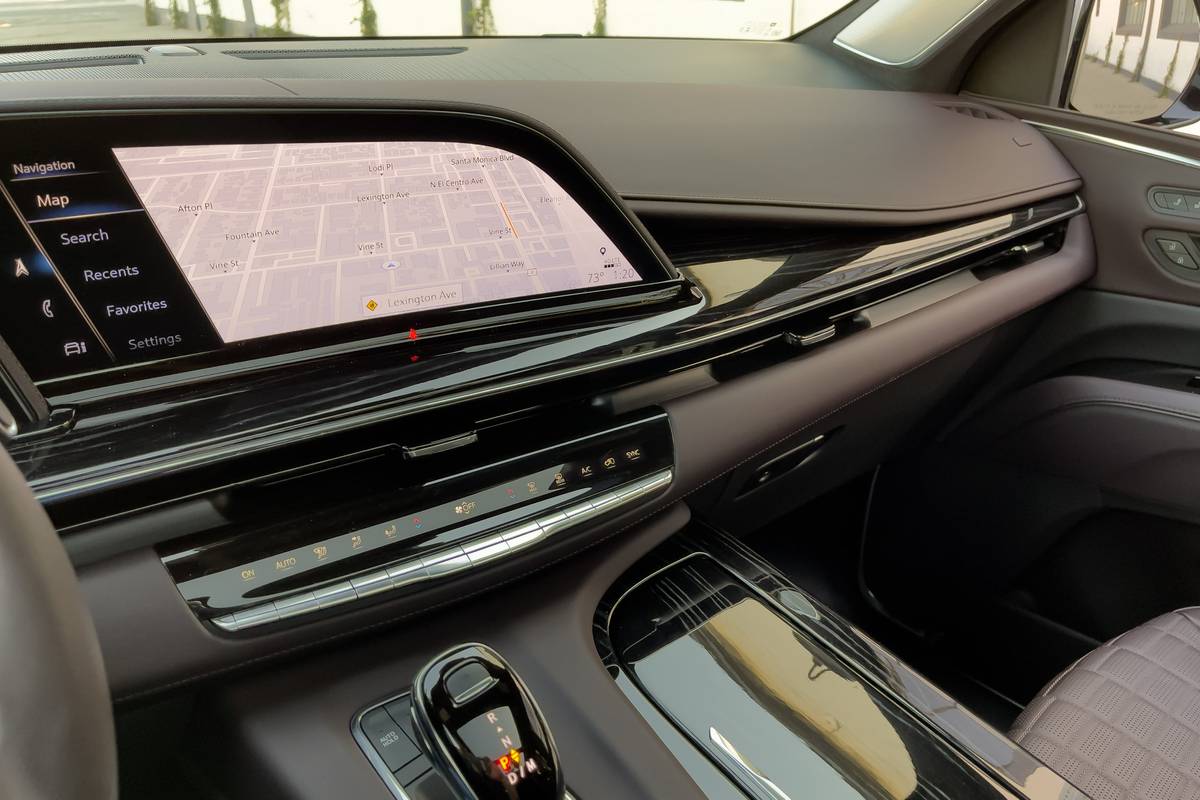 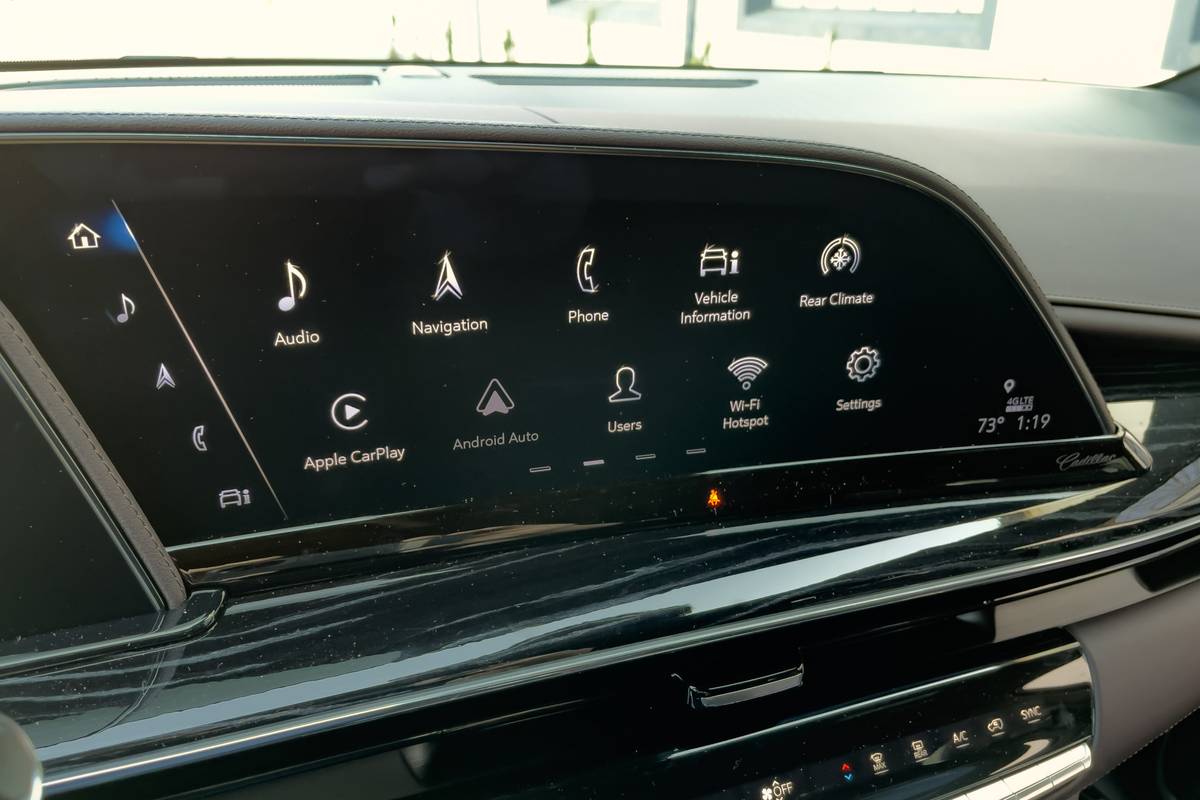 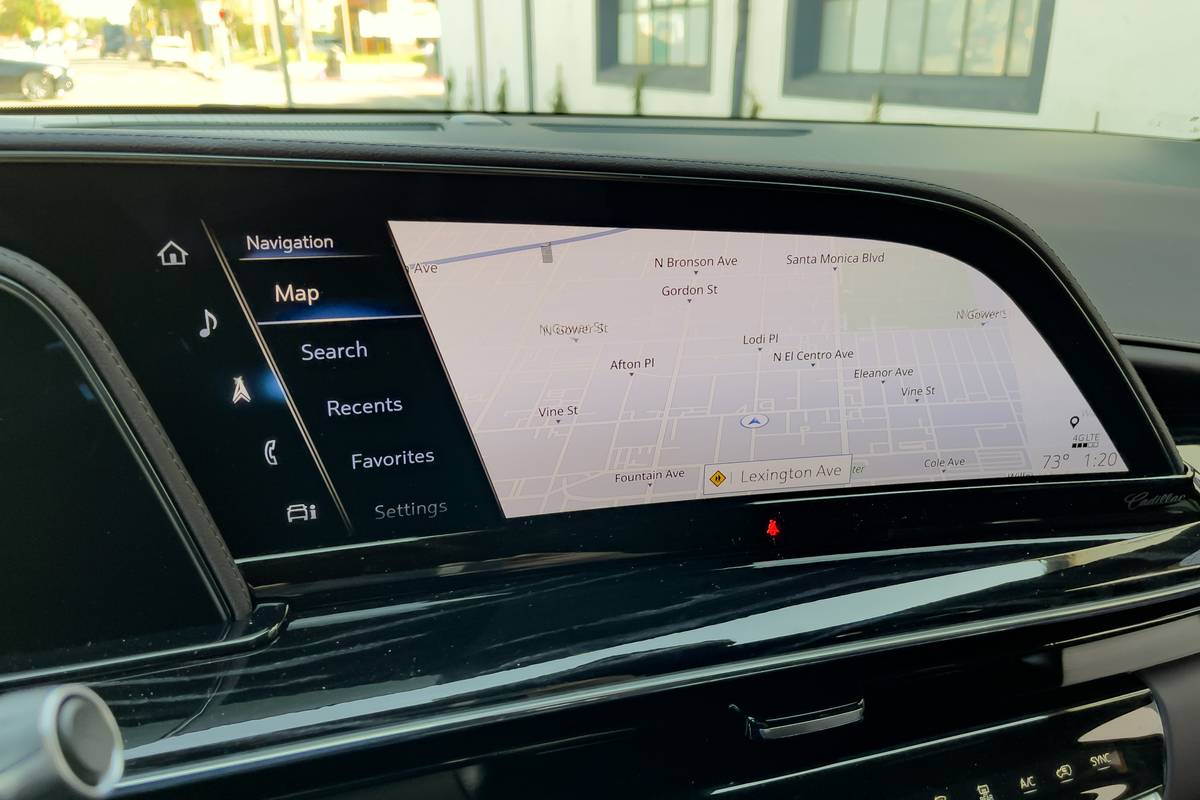 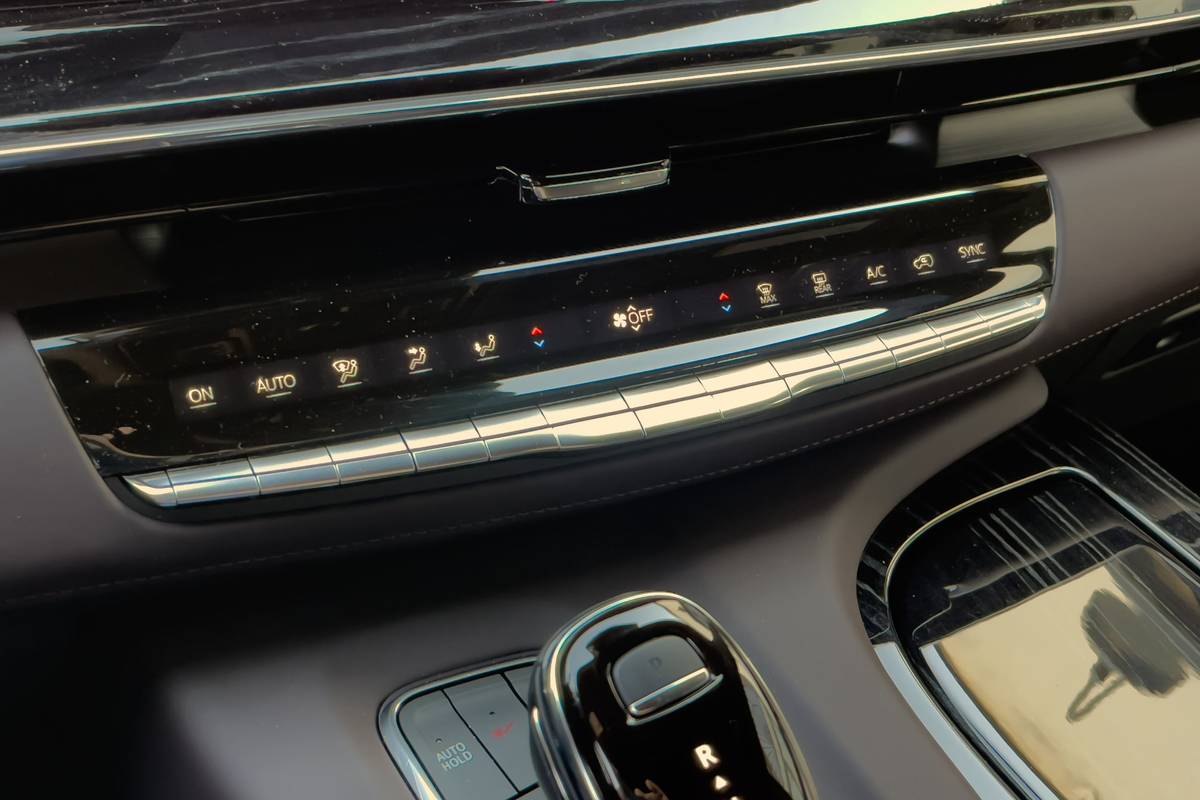 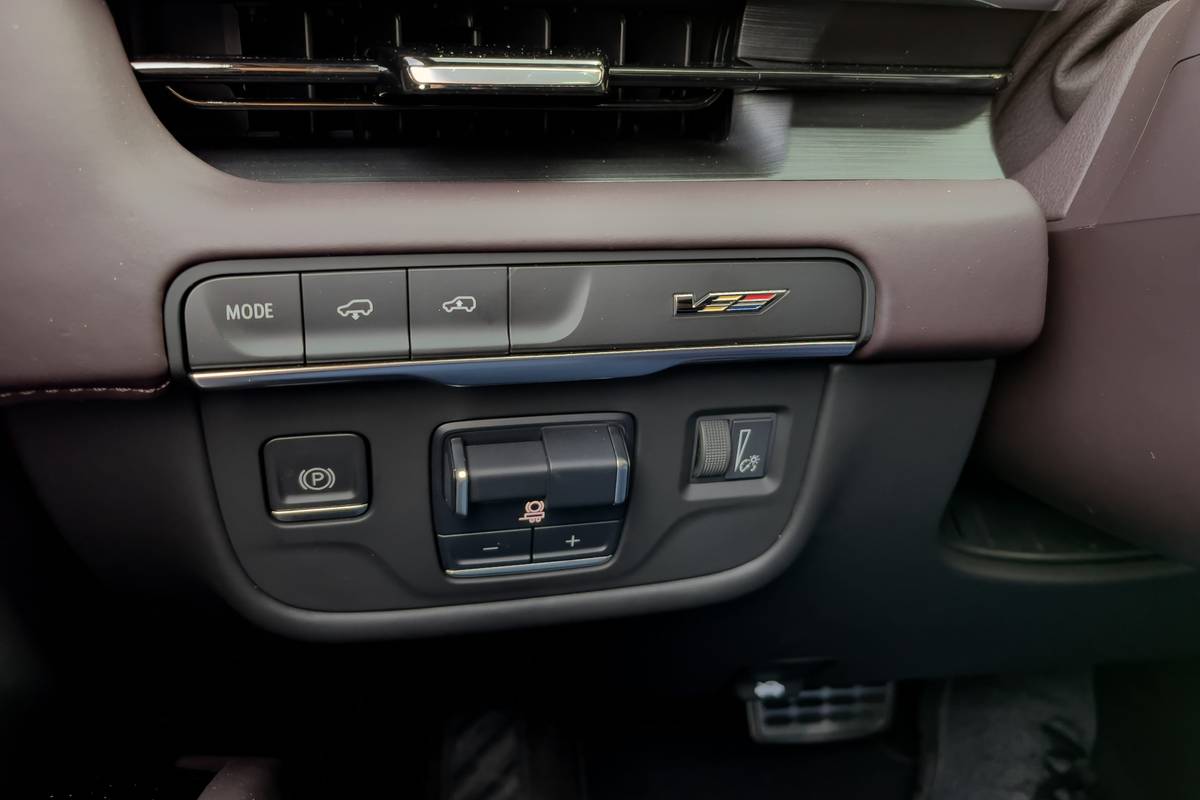 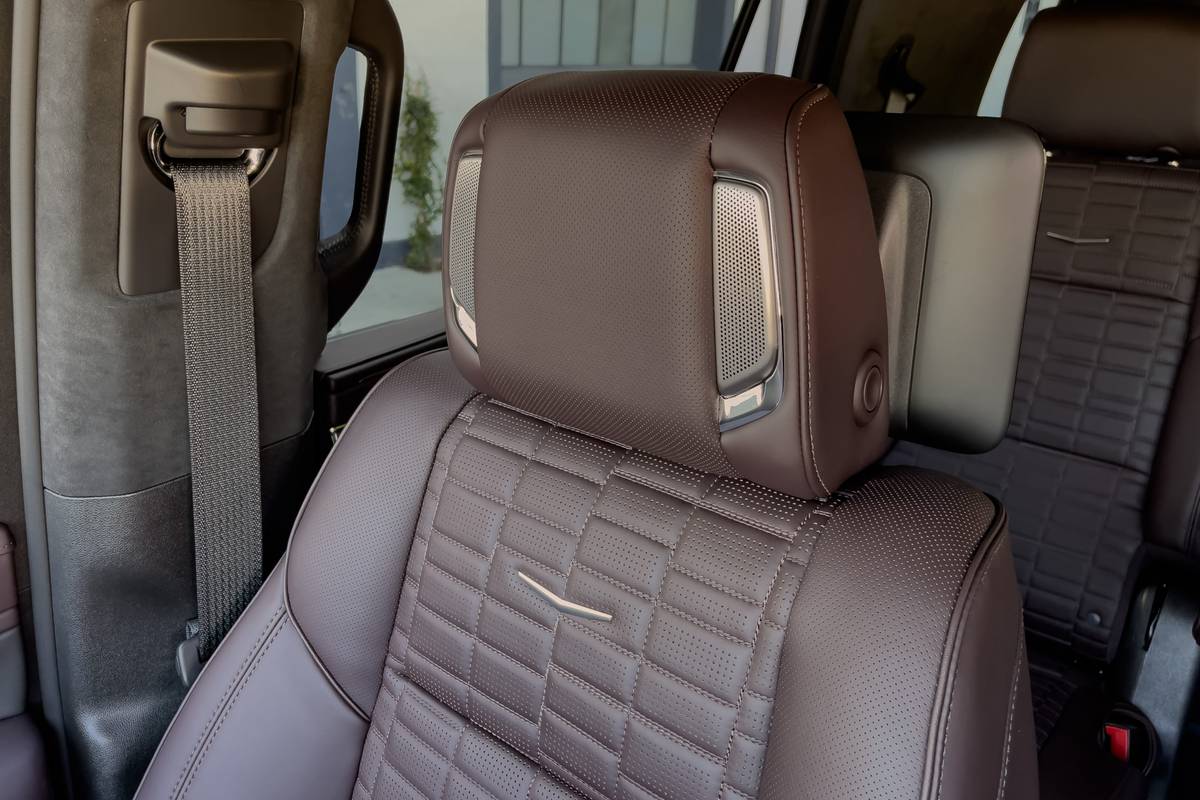 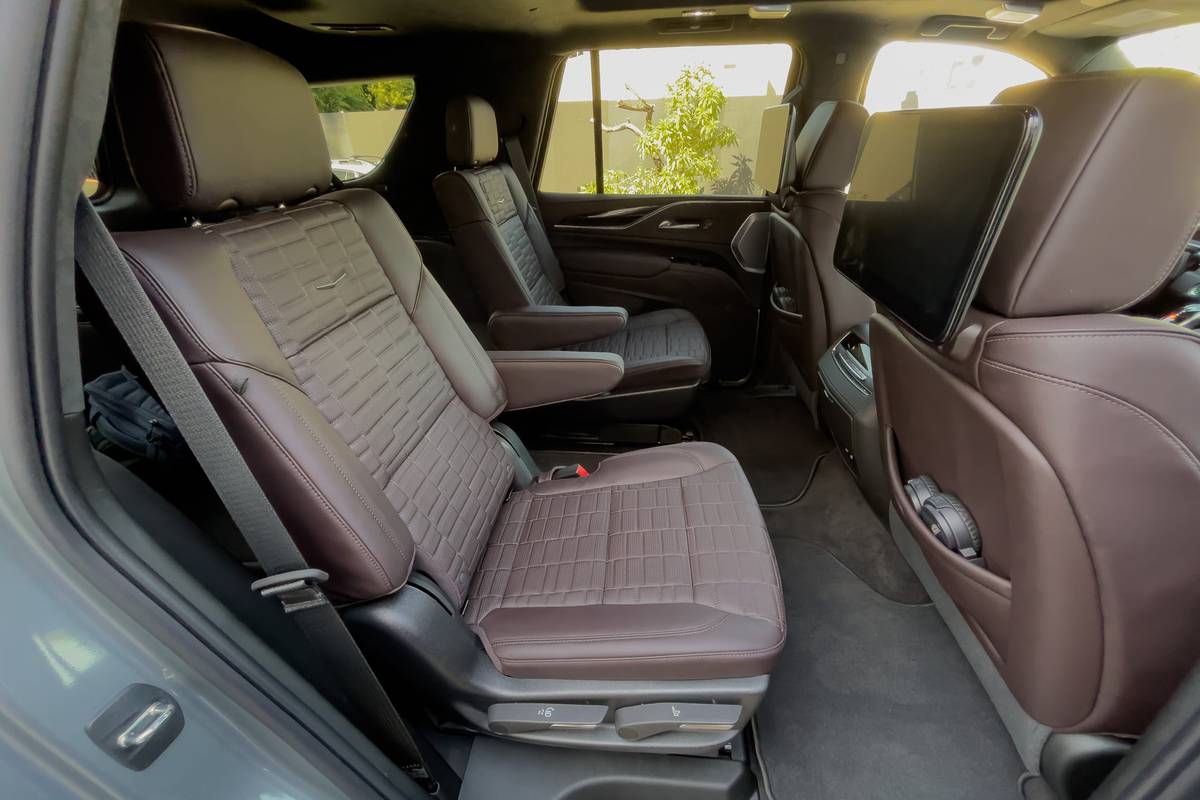 Shop cars for sale near you Research cars Compare vehicles
Don’t miss out on the latest news, reviews and videos from our in-house experts. Get updates in your inbox.

My test vehicle’s cabin was done up in a gorgeous deep burgundy, a color not often seen anymore in vehicle interiors, and it looks just as good here as it has in Cadillacs of old. My only gripe: This is the Platinum-trim interior that’s available on lesser Escalades, and not much about it other than a couple of V badges is unique to the V. It’s a beautiful interior and a big reason the Escalade landed our Best Luxury Car of 2022 award, but considering the price premium of an Escalade-V over a loaded Escalade Sport Platinum, the interior needs something more than the fact that it’s just as lovely as other Escalades.

It Costs How Much?

Ah yes, this is where the painful bit starts — well, this and fuel economy, which I’ve avoided mentioning as it’s kind of irrelevant in a vehicle like this. You don’t buy an Escalade-V for its efficiency, and that’s good, because it doesn’t have any; my long weekend with the truck netted 11 mpg, which is abysmal but not unexpected (the Escalade-V is EPA-rated at 11/16/13 mpg city/highway/combined).

Still, that’s not the truly stunning number. What is: $152,590, which is the Escalade-V’s starting price including destination and a required $1,500 option package for three years of OnStar connected services. That’s around a $40,000 premium over a Sport Platinum trim, which while not as fast or athletic, is visually nearly identical and has just as nice an interior. That 40 kilodollar addition for the supercharged V-8 engine, upgraded brakes, super-loud exhaust, and special tuning for the suspension and various other systems is indisputably hefty. The question is, has Cadillac crafted something special enough to warrant that price premium?

To fans of the Escalade who are already intending to spend over a hundred grand for a Sport Platinum, I’d say probably yes. If you’re shopping the Escalade-V against vehicles like the comparably priced Mercedes-AMG GLS63, BMW Alpina XB7 or Land Rover Range Rover Autobiography, it might be a tougher sell. The Escalade-V has far more interior room than any of these European competitors, but most are quicker and more athletic.

The Escalade-V is truly a high-performance SUV for people who need the extra space or might at some point tow a boat. If your family is a bit too big for one of the Euro luxe rocketships, the Escalade-V might just be a suitable option.