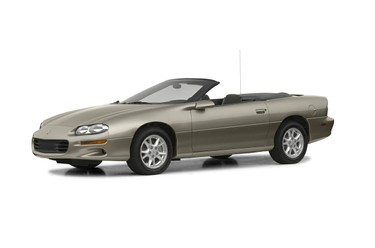 While the '02 Z28 Convertible isn't the best car out there, it's not bad either. It shares the same 5.7 litre-300+ horsepower engine as its Firebird F-body cousin, the C5 Corvette, and the 2004 Pontiac GTO. One main problem with it, however, is the fact that is has a wheelbase much shorter than most cars of its length, and even some cars that are shorter. This gives the Camaro an incredibly wide 20.0' turning radius, which is not very favorable at all. Chevy's 4-speed automatic transmission doesn't work very well at all with the rest of the car's drivetrain, so if you know how to drive a stick go for 6-speed. The interior styling is lack-luster at best, and the convertible top can be problematic (although it goes from top-closed to top-open very quickly). The front seats lack almost any support at all, except for the cushion you're sitting on, but it's bareable. If you don't mind any of these problems, which while they aren't incredibly bad, are still mildly annoying, the car still performs and handles excellently. Even with the 4-speed automatic, acceleration is quick, accompanied by snarling V-8 sounds, and quick shifts. The forementioned problems with the transmission though are the fact that it doesn't always shift quite when it should, and sometimes requires extra throttle pressure to trigger a downshift, resulting in more power then you may actually need. And while the car doesn't turn on a dime, it does respond very quickly to steering wheel input, and has good feedback at the wheel. The car itself rides stiffly, and you'll feel it over bumps, but again it isn't terrible. For the weight it holds, the car is also able to brake surprisingly well, although the soft brake pedal can be a little unappealing. If you're considering this review, please also keep in mind that this car was bought USED. That, and the fact that what I've said is based on my personal experience (although some things I've said have been said by others), and so some of these problems may not apply to you.