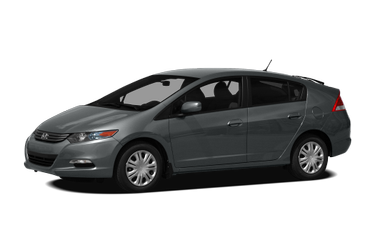 This is a great car!

May 28, 2013
By tomaso from Fort Lauderdale
Owns this car

I test drove this car in the picture advertised by Florida Fine Cars in Miami (May, 2013). It's in great condition and has leather interior! That had to be special ordered and means there was no wear and tear on the seats. I would have bought it, but I had seen one with black interior and fewer miles for $1000 more, so I went for the black cloth interior. I had been comparing the Prius to the Insight for a few weeks, test driving and analyzing both, and I opted for the Insight for several reasons. First, I like the exterior styling of the Honda: it's sportier and not so bugeyed looking. (Talking about Prius 2007-2009. Starting in 2010 Toyota toned down the front headlights and they look better (imho) but they took away the storage space in the doors. I wonder whose idea that was. Now there's only room for a drink in the doors. The 2010 and after also has an open sided storage place between the driver's footwell and the passenger's.In that space the 2007-2009 Priuses had open space. The new design would be better if there were a little sliding door or some way to hide the items you put on the shelf. As it is, it's open and people could see through the windows what you have there. The dashboard and controls is another reason I went with the Insight. The Prius's dashboard was simpler without many lights. Most controls were done on the touch screen. The Insight has a super cool dash, with blue and green lights, more familiar radio and a/c dials and buttons rather than the touch screen. I liked the Prius's armrest better, nice and long, with quite a sizable console for storage. The Honda's armrest is dinky, with a little bit of storage. The Toyota had more places to stash things: 2 glove compartments, a CD compartment, a sunglasses holder from the ceiling, and in the back under the cargo area were nice divided storage bins. The Prius has more room in the back seat for bigger passengers than the Insight, and with the seats folded down, I could put a men's bicycle in the hatchback. The Insight's space is a little smaller, but it does have door storage, space under the cargo floor with divided areas. I could probably get a bicycle in the Honda's back with the seats down. I also tried to lie down in the back, I had to lie diagonally (I'm 6 feet.) So the Toyota might be a better family car, with a little more space that you could easily turn into a campmobile (with a screen room around it.) They're both great cars, but I got the Insight for it's style and dashboard controls mainly. Suggestions for improvement: PRIUS: put the door storage back, make one glove compartment lockable, don't use light cloth on the armrests, come up with a way to close the middle front console out of sight through the windows. INSIGHT: Make the rear slope a bit more generous to the head room for back seat passengers. More storage solutions for the front console and dash. Make one in Ultramarine blue! Get rid of the tacky beige cloth. It's called "grey" in the ads, but it's beige. The Prius had nice medium and dark grey velour-like cloth interior, but the beige (bisque) was so light you'd have to be really careful to keep it clean. The Prius has leather, too, and the Honda should offer that option as well.

I luv this car

I was getting 12 to 15 MPG when the price of gas jumped, turned in that car on a new 2010 Insight. Best move I ever made. I've gotten 55 MPG on the highway and right around 36 to 38 in the city. No complaints, it's perfect. Would buy another one in a heart beat.

Great gas mileage: 41-45 mpg. Comfortable. Good commuting car. Nice dashboard layout. Some negatives: small storage up front, all doors don't unlock when you put it in park, back seats are not for anyone over 5'.

I thought I would wait until I made it through an Iowa winter before I chimed in about this car. I LOVE IT! I'm consistently getting 45 mpg in town and generally above 54 mpg on the highway. Easily enough get up and go for passing and maintaining a cruising speed of 70 mph on the interstate. Only complaint: I'm having issues with the tires....had flats three times this spring and one blow out. Not sure if it's just bad luck or the initial tires were that cheap. I would buy this car again in a heart beat.

why aren't there more?

I didn't know how much the Insight had changed when I went looking to replace my 1995 accord V6, which had been stolen. Fortunately, a salesman talked me into test driving one and I loved it. It gets great mileage, is sporty, aesthetically pleasing, and, for some reason, rare. Must admit I feel smug driving it.

October 11, 2011
By Your average research and buy shopper from Marquette, MI
Owns this car

I was impressed by the fuel economy on the highway. Rated at 45 highway, at 60 miles an hour you can consistently get 50+. The big disappointment is gas mileage in the city. Rated at 40, if you have a commute full of stoplights/signs. It is TOUGH to drive above 35 mpg fuel efficiency. This is driving like a grandma. Accelerating VERY slow. If you drive like most people do in the city you will be getting 25-30 MPG. Not terrible for most cars, but a hybrid? Not very impressed. This car literally TEACHES you how to drive fuel efficiently, a very smart move by honda to make you feel like you are getting even better gas mileage because of the car alone. Going up hills is depressing in this car. All in all, pretty dissapointing in terms of performance, but can't complain about the reliablility as it starts right up, even on sub freezing temperature mornings. Go with the Chevy Cruze Eco if you are debating. I wish I had.

I am in love with this car for almost a year now. Today I was driving on US50 at about 65 miles per hour and my milage was 55 MPG... Any questions? When I drive to work (stops, lights, etc.) - it's 38 MPG stable... Winter time makes it less 5 MPG. No kidding. Just thr right gas. My choice is V-Power from Shell. Any good one would be fine, just DO NOT use regular, that's it. Some people complain that when you stop on the light, your AC goes off. Easy: it's because it's been on AUTO. Just switch to MANUAL and you are fine. Read the manual - it helps... Car is very stable on the turns, it has some nice fitures (it's not a Lexus, so don't expect a luxury)... I would recommend it to any smart user who wants to be green and save some bucks on the gas... Oh, you pay less taxes too (it's a light green vehicle!), plus HOV is your any time... It has some sport car improvemets, so when you need it, it can be transformed to some speedy lady (I've used those manual sticks and was scared!) So, consider!

The Insight is a super-fun little car. It reminds me of my mom's Honda CVCC in the 70's, quick, agile and full of life. And, the most fun part is that it gets close to 50 MPG. In 13 months it still gets 47-49 MPG, and with gas here in Hawaii at $4.32 gal, that really keeps it fun! The only draw back is acceleration, but the gizmos on the dash tell you (and prompt you) to keep fast starts to a minimum.

Bought this car after my 1998 V70 Volvo wagon died. The hatchback is great for our dog, plenty of space. The cons only come out on long trips. The air-filtration system is not good, so when I am in a traffic jam I smell a lot of pollution in the car as compared to the Volvo. Also, there is a lot of road noise when driving fast on the highway. The stereo system is tinny. I think for $10,000 more you can buy the prius and these problems will go away, but others will pop up instead (like the price tag). Pros: the seats are the most comfortable I have ever sat in. Driving is very comfortable (5'9", 150 lbs). The navigation system is nice to have at a low price point. The car drives really well, very responsive. Has been fine in the snow. I recommend a test drive, it is a fun car.