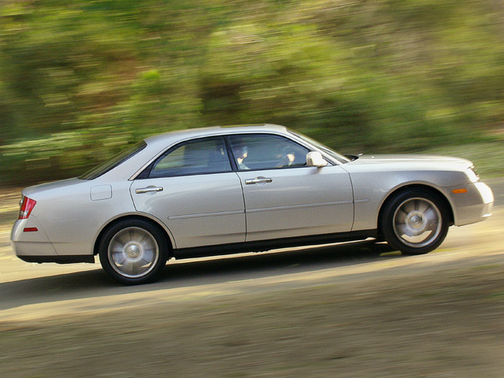 Our 2003 INFINITI M45 trim comparison will help you decide.

With a 340-horsepower V-8 engine driving the rear wheels, M45 is a fast machine with lots of appeal.

A new addition that fills out Infiniti’s middle range, it’s also a conservative-looking sedan that fails to register many second glances. And based on a long-running Nissan staple in Japan, M45 is saddled with some aging chassis technology.

Nissan and its luxury division, Infiniti, have been creating remarkable cars and trucks in the past few years, turning the Japanese automaker away from the brink and back on solid ground. Infiniti is being set up as a luxury/performance brand, leaving the cushy pure-luxury realm to archrival Lexus.

Although Infiniti’s redesigned Q45 flagship and new G35 are stylish and sporting, the M45 is something of a mixed bag. Engine power sparkles, but the overall driving experience is not as bright as it could be. And styling falls short of Infiniti’s other shining stars.

The powerful 4.5-liter V-8 is the same engine that motivates Infiniti’s flagship, Q45. Only here, it’s in a lighter, more maneuverable vehicle.

Competitors have to get up into their premium-priced performance range, such as AMG for Mercedes, to match the engine power in the M45. Off-the-line acceleration is strong, so much so that a careless push of the throttle can rocket you into trouble before you know it. Under way, things settle down a bit, though this V-8 is always ready to pull.

Smooth and quiet, the engine provides a sophisticated aura for the M45, not just power. The 4.5-liter is the only engine available, along with a five-speed automatic with a manual-shifting mode.

The M45 drives and handles nicely, but its road manners are not nearly as impressive as its engine power. What’s lacking is the solid ride and responsiveness of the European sports sedans, such as Audi’s S6, or Infiniti’s smaller G35.

Based on the chassis of a Japanese home-market product, the Nissan Gloria (which is widely used as a taxi), the M45 seems dated despite all the power, electronic equipment and luxury features.

The speed-sensitive rack-and-pinion steering is quick and direct, and the suspension works to keep the M45 level in turns and steady on the road. But all together, not considering the engine power, the M45 feels bland and unremarkable.

The midsize Infiniti is surprisingly plain looking, especially in relation to the edgy, forward-looking styles of such recent Nissan and Infiniti cars as Altima, Maxima and the G35. The M45 is attractive, with nicely creased character lines, a good-looking grille, projector headlamps and a purposeful appearance. But it fails to stand out like other recent Nissan and Infi niti products.

The black-leather cabin looks businesslike, with supportive seats, bird’s-eye maple trim and Infiniti’s customary analog clock, which is handsome and jewel-like. The back seat is tight on legroom, and the center hump (remember, this is a rear-drive car) makes the center seat fairly useless.

The center video-display control panel, similar to that in the Q45, is a real pain. The audio and climate control share the digital array, which requires manipulating the screen every time you want to change a station or change the temperature setting. That’s an extra step and extra time with your eyes off the road to manipulate the controls.

The control knobs on the center binnacle are haphazardly and illogically arranged. Maybe you eventually get used to them, but in a weeklong road test, it never came easy.

The interior is enhanced with a load of standard luxury features. There’s a 225-watt audio system with seven Bose speakers, along with a six-disc CD changer that sounded really great. Also standard are dual-zone temperature control with rear-console ducts; leather seats and steering-wheel rim; and front and rear side-impact air curtains.

Optional technology includes a DVD video-display mapping system, a laser-guided cruise control that maintains following distances behind traffic, and the Voice Recognition System from the Q45. None of this stuff was on the test car.

The base price of $42,300 seems steep, with the Q45 starting at just a few thousand more. For that money, you do get that sparking engine power and a bunch of luxury and performance gear, but competition from BMW, Audi, Volvo, Mercedes-Benz, Cadillac and Lexus is pretty stiff in this range.

The test car included: a large sunroof, $1,000; a comfort and convenience package of tire-pressure monitor, full-size spare, Homelink transmitter, driver’s memory seat, anti-glare mirrors and an electronic compass, $950, which seems like a lot; a trunk mat, $60; and shipping, $545. The total is $44,855.

A fast sedan with a load of luxury and performance features, the M45 fades in the face of heated competition, despite its horsepower advantage.

I've always liked the look of this car especially when I first saw the car on old Japanese films from the 1970s-2000s . After my Nissan started having transmission issues (a code popped up and stayed on), I decided search for a new car. I wasn't about to pay $5k for a new/used transmission. It just happened that 2 2003 Infiniti M45 popped up in my area. One was gray. I test drove the gray car, even put money down on it. The second M45 was black. When I saw the black car, I fell in love instantly. Sometimes a car chooses you. The gray car didn't feel right. However, the black one did. I got the car home and people were giving me thumbs up and honking. I took it to a couple of Infiniti dealerships so they could inspect the car. I'm not one to just trust the word of 1 shop. Oh boy talk about needing major work. I needed new shocks (front and rear), new calipers, engine oil leak needed rectifying, new tires and rims (was on 20inch rims), had a subwoofer in the trunk (not professionally done), starter and alternator. I took care all of the issues including the engine oil leak and added a new radio and back-up camera. I've spent about $10k on the car (to return it to stock condition and to my specification). Now, the car is a rocket. The car is great on the highway, not so much for city driving or stop and go traffic. The gas mileage is so-so. It is a V8 so it is going to suck up gas. On the highway, you don't even know you are doing 75-80 and more until you look at the speedometer. The interior is bland. Cheap plastic parts make up the interior especially the arm rest. The drivers' seat creak but if you get it in a good position, you won't hear it. The cd player is in the glove compartment box. There's no after market parts for the car due to the fact that it was produced for 2 years for the US Market. However, over in Japan it was produced for decades. Parts are hard to source new. Am I happy with the car? Yes, I am. You have to take care of the car, love it, baby it. You will have to put money into the car. If you do all of that, the car shouldn't give you any trouble at all. Oh as for the Nissan, the check engine light went off after I purchased the Infiniti. Btw, I've had the Infiniti for 5 years.

One of the most fun cars I've owned

March 20, 2020
By Wonderboltz88 from Loveland Colorado
Owns this car

Ive owned this car for about 5 years and other than fuel mileage I have absolutely loved it. The vk45 V8 lives up to the power of it's racing heritage and the cars handles daily driving and long road trips without mechanical issue or issues with comfort. The real shame is they didn't make more of them.

When I purchased was curious, but learned car quic

December 28, 2019
By Jroc from Milwaukee WI
Owns this car

I was looking for a different vehicle and the infiniti m45 was the last vehicle I saw. I have seen it on the road slightly and always loved the look, but never thought I would be purchasing one. Upon first drive it doesnt feel as big as it looks. The driver seat holds you in pretty well and with all the features in it, making it fit your comfort for driving is pretty easy. Now being a bigger car it actually doesnt have much roll to it and handles decently. Acceleration is okay but does lag in lower gears. Manuel mode does no justice as the car will just shift itself. Its more of a "fun" thing. Electronics are a bit outdated and doesnt do things I wish it would. My 04 Bonneville GXP electronic features were far better. I also noticed solinoids go out on everything. From drivers seat to windows and etc. Driver seat also "creeks" after good use. Body of vehicle holds up pretty well down to chrome and molding around car. Mine still shines up pretty well. Overall I do really like this car as it does turn heads because alot of people arnt use to seeing it and those who do know what it is...love it!!! Price it goes for I would recommend it but you do have to take care of it.

All model years for the INFINITI M45 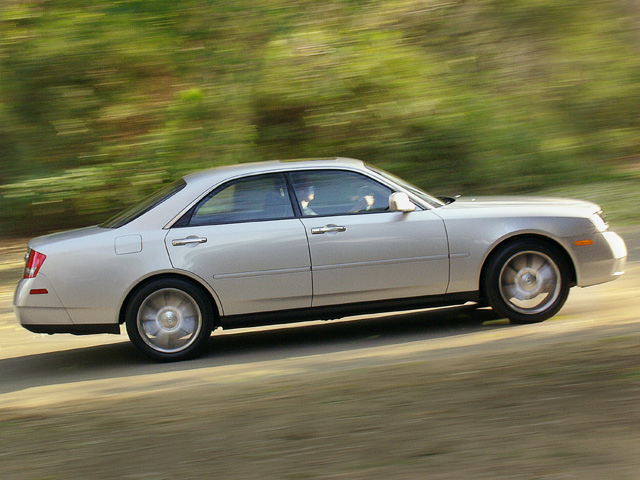 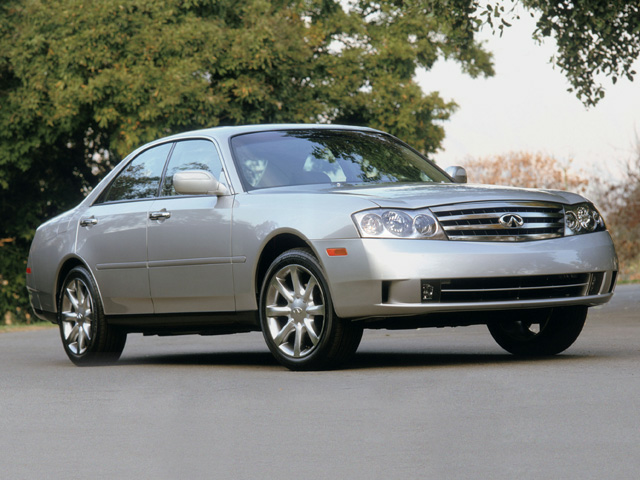 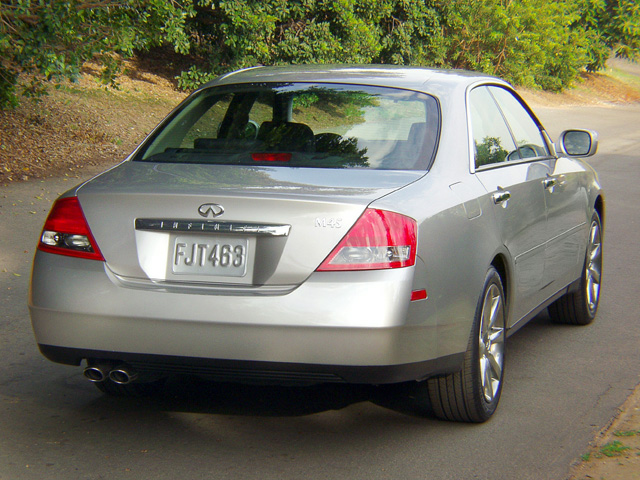 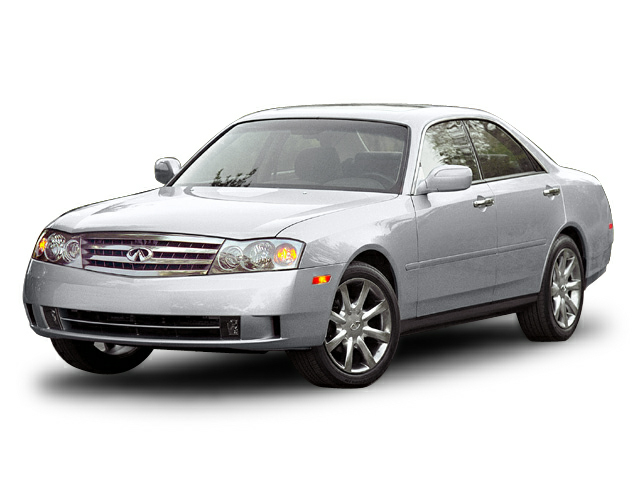 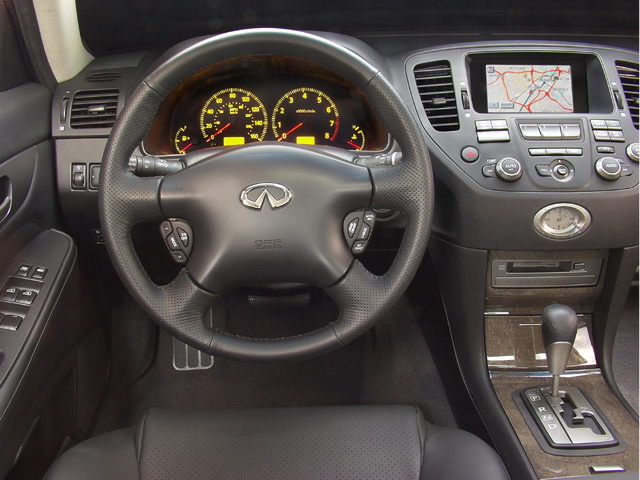 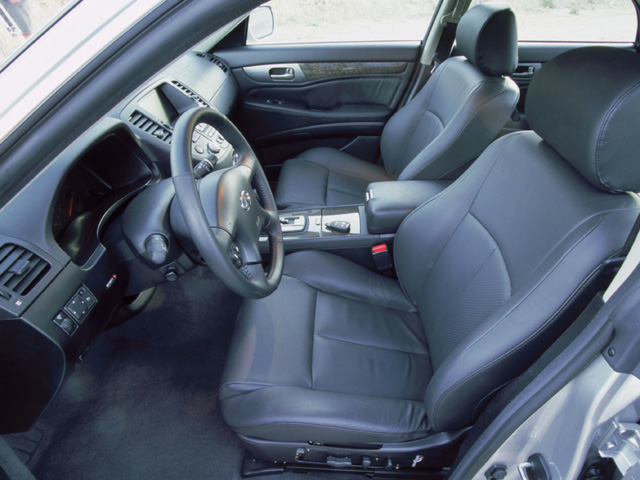