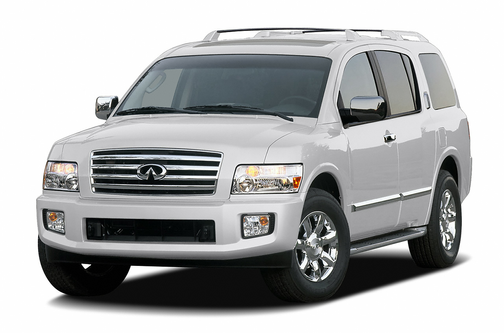 Our 2006 INFINITI QX56 trim comparison will help you decide.

Despite the recent spike in gasoline prices (followed, thankfully, by a refreshing if perhaps not permanent decline), the full-size sport utility market is alive and well, and on track to rack up about 700,000 sales this year.

Those of you looking for a vehicle in this class might want to check out the Infiniti QX56, one of the best on the market.

Essentially an upscale version of the Nissan Armada, the QX56 and the Armada were introduced for 2004 along with Nissan’s first full-size pickup, the Titan. All three vehicles are built on the same architecture, and come from Nissan’s newest U.S. plant, which opened in May 2003 in Canton, Miss.

The QX56 replaced the midsize QX4 in the Infiniti lineup. That vehicle, an upscale clone of the previous-generation midsize Nissan Pathfinder, never quite caught on with consumers.

As for the QX56, it’s the only traditional truck-based sport utility in the lineup of Infiniti, the luxury brand of Japan’s Nissan. Nissan chose not to produce an Infiniti version of the redesigned Pathfinder that went on sale for 2005, probably because it already had the full-size QX56 and the car-based midsize crossover models, the FX35 and FX45, for Infiniti customers.

Crossovers are the rage now, anyway, so Nissan apparently felt that the FX models would fill the gap left by the demise of the QX4, while the QX56 would appeal to consumers who still wanted a truck-based SUV capable of carrying up to eight passengers and pulling big horse trailers and such.

With the QX56, Infiniti entered a segment it hadn’t played in before, just as Nissan did with the introduction of the Armada. Maybe it came a bit late, as the market for traditional SUVs has cooled somewhat, thanks to a combination of higher fuel prices and the advent of the more-refined crossover vehicles.

But with the Armada and QX56, Nissan hopes to carve out a profitable share of the full-size luxury SUV market, where General Motors Corp. this year has increased its dominance to nearly 70 percent of sales from 60 percent last year. That has occurred mostly because of the introduction of the redesigned 2007 Chevrolet Tahoe/Suburban, GMC Yukon/Yukon XL, and Cadillac Escalade models earlier this year.

And more competition is coming, with Ford about to roll out the next generation of its full-size Ford Expedition and Lincoln Navigator models this fall.

Still, though, the QX56 is a credible entry in the big luxury SUV class. The QX56 also marked another milestone for the brand: It’s the first Infiniti product to be built in North America.

The QX56 gets part of its name from its 5.6-liter V-8 engine, and it is the fourth Infiniti model to carry a V-8 engine. The others are the Q45 and M45 sedans, and the FX45 crossover. Those three come with 4.5-liter V-8s, however; the QX56 is the only one to carry the bigger engine from the Titan pickup.

This engine is rated at 315 horsepower and 390 foot-pounds of torque, just as it is in the Titan (it’s the only engine offered in the Titan or the QX56). That’s plenty of power for this vehicle, and freeway merges — even on uphill on-ramps — were made with ease in our test vehicle.

While this is a truck, the ride is the most carlike you’re likely to find in a vehicle with a truck-style body-on-steel-frame arrangement. It’s very quiet inside at highway speeds, as well.

The fulltime all-wheel drive system, which is about a $3,000 upgrade over the base rear-drive model, comes with a two-speed transfer case for low-range off-road operation — something you won’t find on the more-expensive LX 470 or even on the Escalade. Of course, most QX56 buyers aren’t planning to do much serious trail driving, but it’s nice to know that the vehicle has that capability.

As with the Escalade and Navigator, the QX56 has seating for up to eight people, or seven if the consumer chooses captain’s chairs for the second row. It has been designed with both great on- and off-road capabilities, with luxury trappings befitting a model in this class.

The QX56 has an independent rear suspension and five-speed automatic transmission. The suspension has an automatic-leveling feature, which comes in handy with a heavy trailer attached. Towing capacity is 8,900 pounds, and there is nothing extra to buy. The large rear bumper comes with built-in towing hardware, an important feature in this class. People love to tow boats, horse trailers and RVs with vehicles such as this.

Exterior features include a large hood, Infiniti-style chrome “waterfall” grille, and barrel-shaped sides. Some design cues were carried over from the QX4, including jewel-like xenon headlights low in the fenders, combined with halogen fog lamps. Also included are seven-spoke, 18-inch chromed aluminum-alloy wheels, as well as chrome wheel lip moldings.

Infiniti-style LED tail and brake lights are included, along with a power-operated liftgate with separately opening rear glass. The power liftgate is one of my favorite features of the QX56. It can be opened by a button on the remote control or on the left side of the dash, and can be closed by those buttons or another one located just inside the liftgate at the top left.

This system, which is now showing up on other big SUVs as well, is a convenient way to open the liftgate with your hands full of packages, and it also negates the need to pull down the heavy gate by hand to close it. High-tech gadgetry includes a back-up obstacle warning system in the rear bumper, as well as a rearview monitoring system, which includes a camera built into the rear license-plate holder to give the driver a video view to the rear of the vehicle. The view is projected onto the seven-inch LCD TV screen of the navigation system in the center of the dash.

Luxury features abound inside, including leather seating surfaces, carpeting, and dark or blonde wood trim on the center console cover and steering wheel, with aluminum accents on the steering wheel trim and instrument panel.

The third-row seat is designed to be comfortable for adults, not just kids, and it is elevated to give occupants a good forward view. It can easily be folded to increase cargo space — as can the second-row seats.

Other standard amenities include dual-zone automatic climate control, a Bose audio system with 10 speakers and six-disc CD changer, and steering-wheel-mounted audio controls. A feature pioneered by Ford is catching on in other models, including the new QX56 — adjustable brake and accelerator pedals.

Fuel economy, though, is about what one would expect for a big vehicle such as this: 13 miles per gallon in the city and 18 mpg on the highway for the all-wheel drive model.

The car is loaded with every feature to make your drive and ride memorable with luxury and comfort. Always willing to drive or ride .

One of the Best SUV's in the Market!

This is one heck of a SUV and the best value money can buy. I have owned this vehicle for about 2 years now and absolutely love it!

It was the best car I ever had I want to get a newer one asap...since I have a big family it was perfect for my life style we travel a lot on summer trips to FL and MA

All model years for the INFINITI QX56 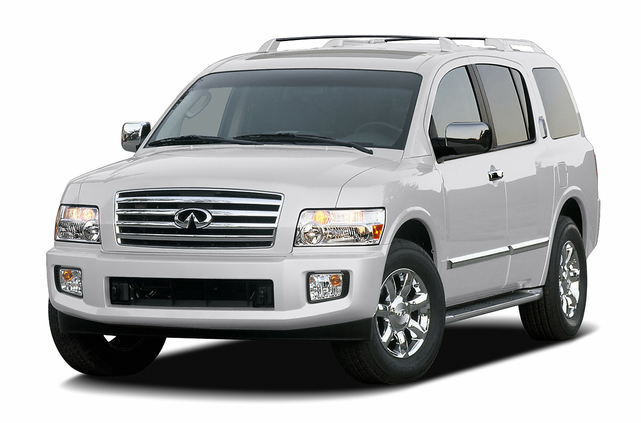 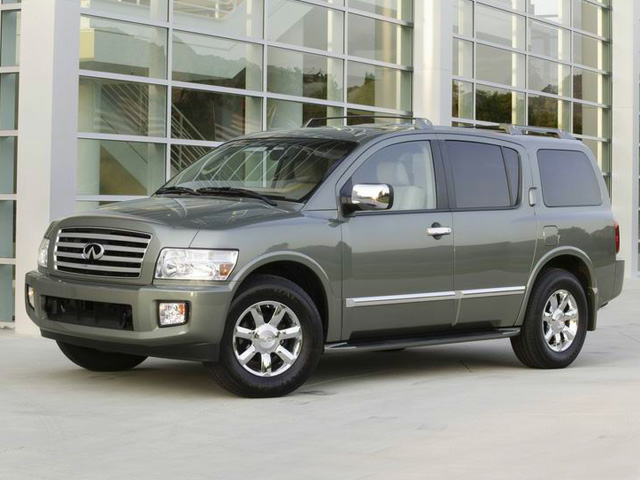 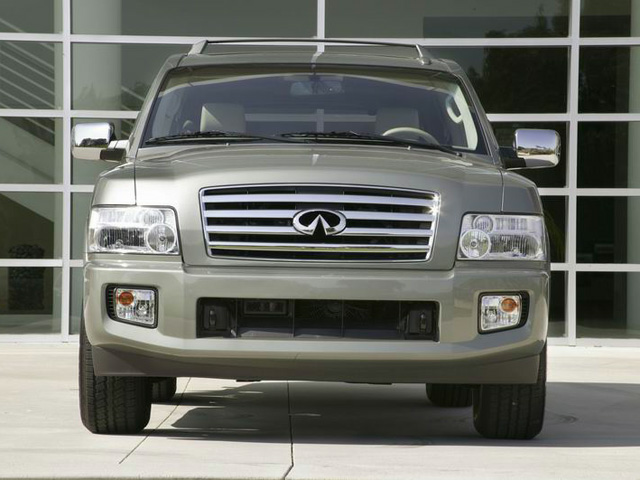 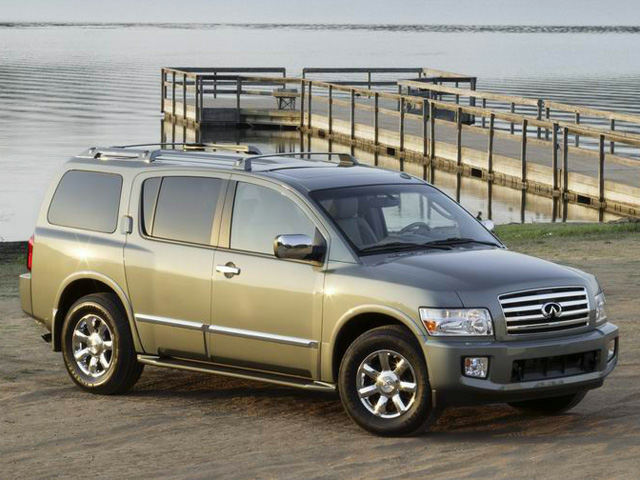 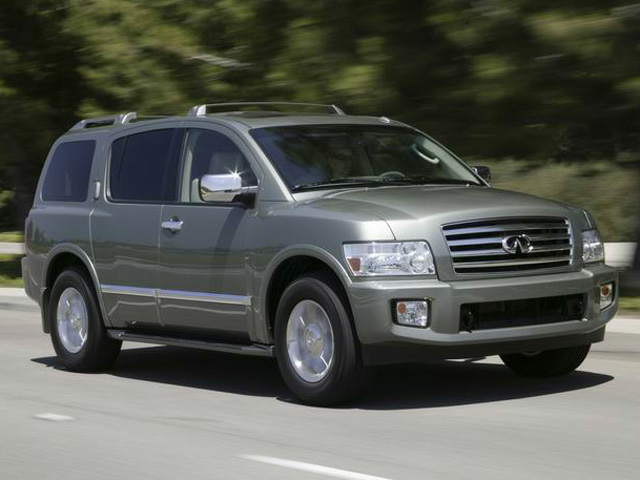 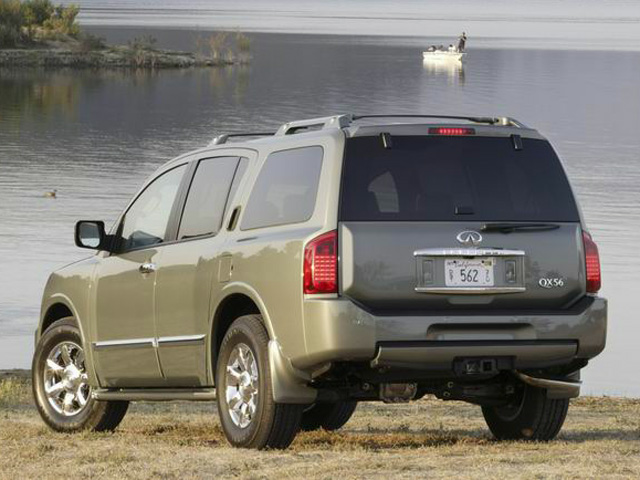 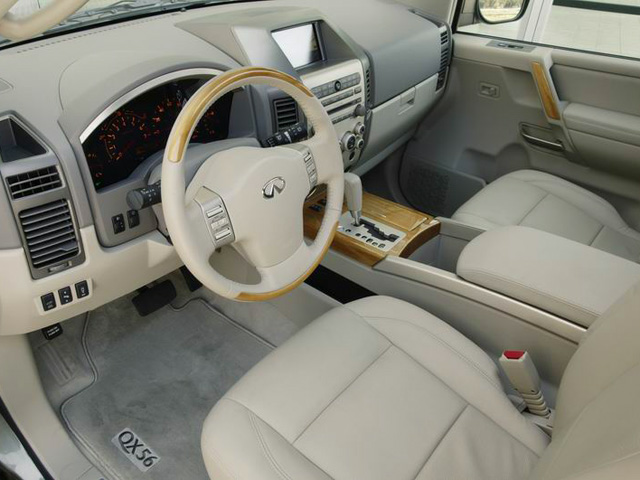 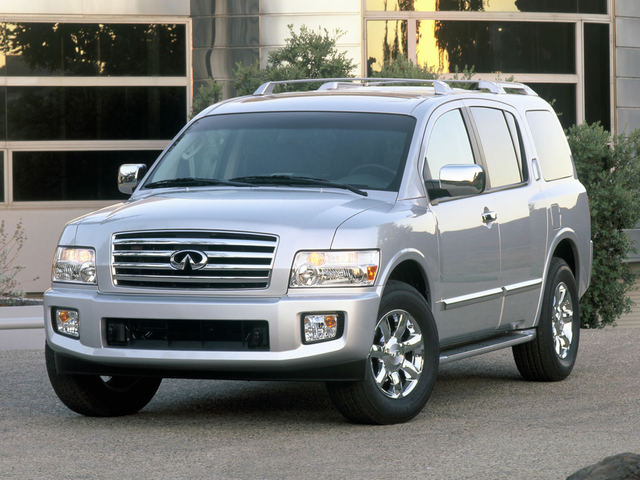