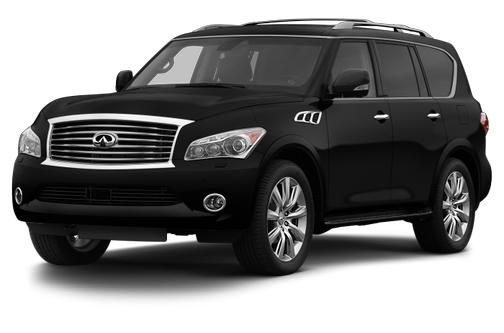 Our 2013 INFINITI QX56 trim comparison will help you decide.

Editor’s note: This review was written in January 2012 about the 2012 Infiniti QX56. Little of substance has changed with this year’s model. To see what’s new for 2013, click here, or check out a side-by-side comparison of the two model years.

There aren’t many big SUVs I would want to drive daily, but a week with my family in the 2012 Infiniti QX56 might have changed my mind.

I can definitively say that I would like to ride around in it as a passenger every day; seating seven or eight people, it’s cush and totally luxurious. As it should be: Padded with plenty of extras, my four-wheel-drive test vehicle came priced at an exorbitant $75,340. I may very well have to choose between this opulent, luxurious SUV and sending my kids to college. College is overrated, don’t you think? My zoology degree is doing nothing for me. (Compare the four-wheel-drive version to the slightly less expensive two-wheel-drive version here.)

The QX56 manages to quell the myth that all SUVs are trucky and rugged. Instead, this beauty seeps comfort and luxury from every pore. Its private-jet-inspired interior is draped in gently gathered, buttery-soft leather, with all the extras that even the prissiest prima donnas among us would love. My favorites? Heated and cooled front seats, heated second-row seats for my prissy biological offspring (I say that lovingly), and a heated steering wheel that’s just as comforting as warming my hands on a cup of cocoa.

EXTERIOR
The QX looks a little like a guy I saw at the airport the other day who was trying to squeeze in a few too many trends. (Really? Black, skinny emo jeans, a handlebar mustache and a Mohawk? Choose one trend and rock it.) The QX has just a little too much going on for my taste. I’d take away those blingy chrome gills on the front fenders to clean it up a little.

The QX is a huge SUV (6.3 inches longer than a 2012 GMC Yukon Denali), but you don’t really notice its full size until you try to park it in a garage space normally reserved for your small family sedan. Despite its grandiose size, the QX is remarkably easy to maneuver through your daily driving life thanks to its standard 360-degree Around View Monitor and a front and rear sonar system. In a vehicle this size, you’re normally left blindly creeping forward in a parking space or garage until you oh so gently bump into something, letting you know you’ve pulled all the way forward. (The kids won’t notice that little dent in their plastic wagon, right?) In the QX56, you can switch on a front-view camera that shows you just how close you are to the object in front of you, a side-view camera showing you the side of the car and the curb as you’re trying to parallel park, or a 360-degree view showing you a picture as if from above the car. Audio park assist adds to the ease when parking.

Of course, the QX’s large size does come with some downfalls. Mainly, getting in and out of this vehicle can be challenging for those of us under 6 feet tall. Despite the standard running boards, my daughter managed to get a huge, filthy smudge on her “fancy” dress and white tights while getting into the QX56 on the way to her piano recital. Of course, the dirt, ice and sludge that build up on the underside of cars in the Denver area in the winter doesn’t help this situation at all.

FAMILY-FRIENDLY FEATURES
While the wide, flat seats in the QX56 are awesome for installing an array of odd-sized child-safety seats, they’re not awesome for holding smaller drivers and passengers in place during the slight body roll that happens in such a large SUV. I didn’t like sliding from one side of my seat to the other and then back again around every curve. As it turns out, bolstered seats have a purpose besides looking sporty.

In a market full of hard-to-access third rows, the QX56 excels. The second row captain’s chairs fold and tumble easily using either a hand lever on the seat itself or, better yet, a button on the dashboard. This is great news. Now, trying to load kids while being pressured to get through the carpool lane quickly, I can press this button to tumble the second row forward from the comfort of my heated driver’s seat so all the kids can climb into the “way back.” The kids who are climbing into the second row can then easily press the captain’s chair back into place and climb in. And when I say “easily,” I mean it. Even my 7-year-old stepdaughter can do it by herself.

To go from hauling kids to hauling stuff and back again, the power-operated split third row folds flat via a button in the cargo area. Ahh — no seats to remove, no seats to fight with, no numbered tabs to pull. (Step 1: pull this. Step 2: fold that. Step 3: give up.) Just easy, simple seats that fold. Ingenious.

What’s not so ingenious is the odd placement of the side mirror adjustment lever: below the dash in front of the driver’s left knee. Unless you’re completely disproportionate, a driver of any size would have to bend forward and down to adjust the side mirror, guessing for proper placement, then sit back in the seat and hope they got it right. Nope? Try again.

Legroom in the second row is expansive while leaving enough legroom in the third row to accommodate kids of all sizes, or even average-sized adults. There are nine cupholders and four bottleholders scattered throughout all three rows, ensuring that every passenger can have his or her coffee and drink it, too.

BEHIND THE WHEEL
While some may enjoy the perception of safety they feel when driving a large SUV that can plow over anything and everything it may encounter, I found the QX56 to have some disconnection from the road. Its driving quality was refined, but the ride felt floaty. I had to simply trust that it was doing what it was supposed to while driving over icy roads; I was so far away from having any direct road feedback.

Acceleration in the QX, which sports a 5.6-liter V-8 engine with 400 horsepower, is light and easy, but moving such a behemoth that quickly comes at a cost. In this case, it’s fuel consumption: The QX56 gets an EPA-estimated 14/20 mpg city/highway with either rear- or four-wheel drive. Ouch.

SAFETY
The 2012 Infiniti QX56 hasn’t been crash-tested. (Full-size SUVs seldom are.) It features driver and passenger front airbags and seat-mounted side-impact airbags, as well as standard side curtain airbags for all three rows of passengers. As required of all 2012 and later models, the QX includes antilock brakes, traction control and an electronic stability system. Hill start assist is also standard.

The lower anchor Latch points in the second row captain’s chairs are nicely stowed in the seat bight and accessible via a slit in the seat bottom. The flat seat bottoms and wide, reclining captain’s chairs make it easy to fit a child-safety seat of any shape or size. This feature is also helpful for accommodating booster seats of any width, with enough leftover space for kids to reach down and access their own seat belt buckle. For kids in booster seats, the seat belt buckle receptors are on stable bases, making it very easy for them to buckle up independently in the second row.

The third-row seats have flimsy seat belt buckles on nylon bases requiring much more advanced dexterity to buckle up. The seat belts also have highly sensitive automatic locking retractors, causing my girls (ages 7, 9 and 11) to “lock” their belts almost every time while buckling up in the third row. While the older two understood how to let the seat belt retract all the way back in before trying to pull it out more slowly, this concept was lost on my youngest. On more than one occasion, I had to climb into the third row through the cargo area to help out. I’d reserve these seats for the “big kids” in the family.

Yes, it's 8 years old now but wow, what a sweet ride. I love the interior. Plenty of amenities and nicely appointed. Powerful V8 and handles nicely for a large SUV. Very happy!

Has Electric Issues ... but all else is good

Love the car, powerful, comfortable, and it has lots of room for Kids, dogs, etc. I have had failure to start now a couple of times, whereby I had to tow the car to the dealer. No real solution, except to replace the battery. Seems to be an issue with others but no real solution.

I own a Jaguar

Its perfect for my wife and I. We are expecting our first child. The room is perfect and It is Luxury at its finest. I love the attention I get on the road.

All model years for the INFINITI QX56 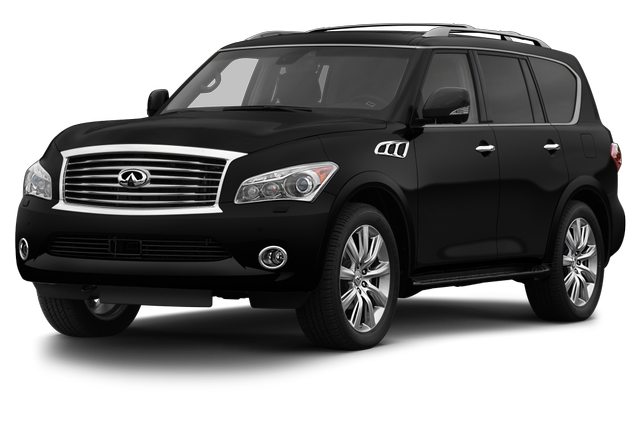 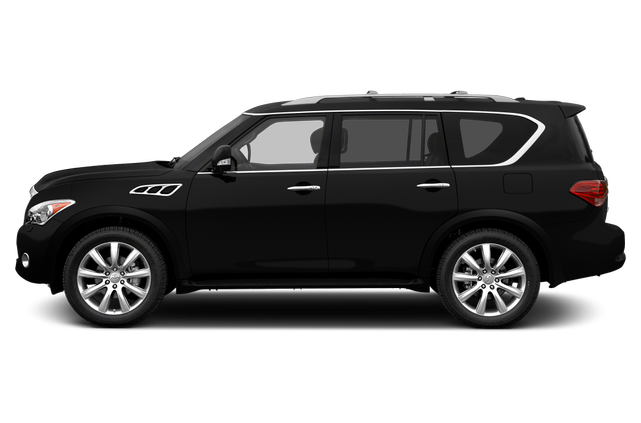 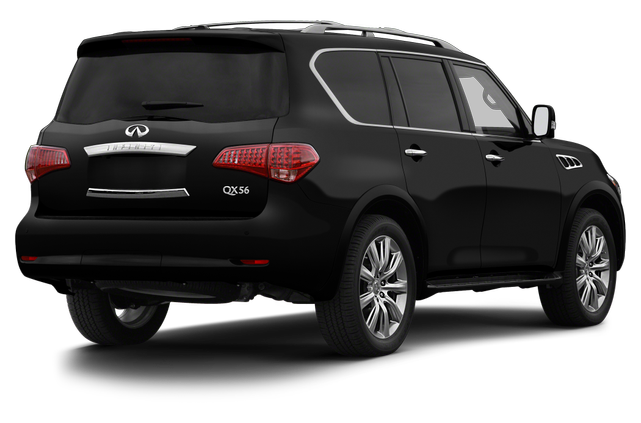 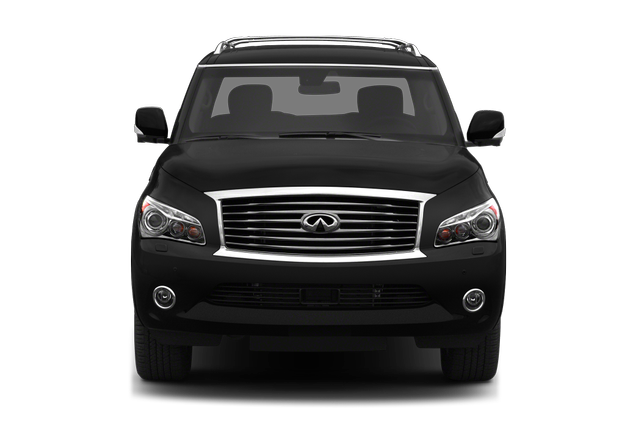 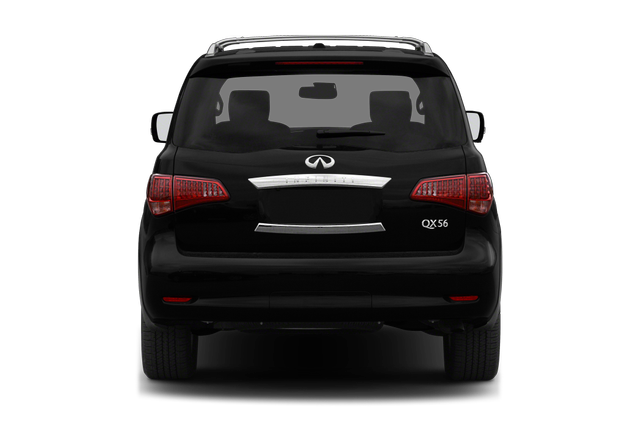 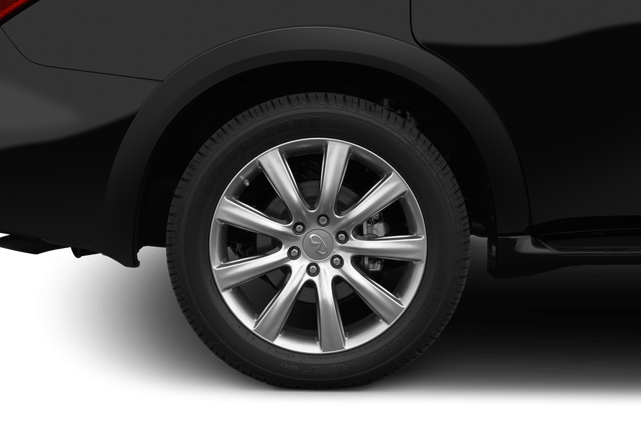 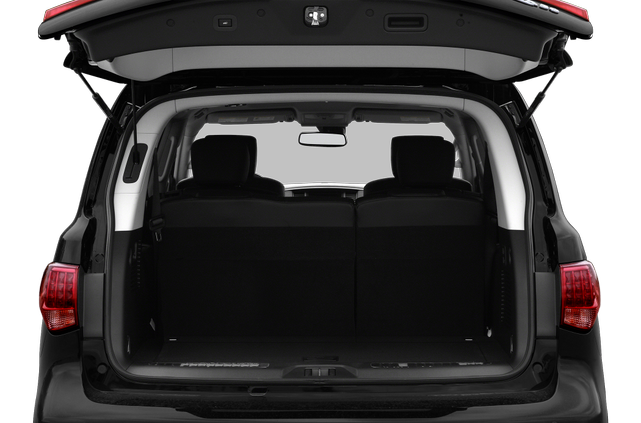 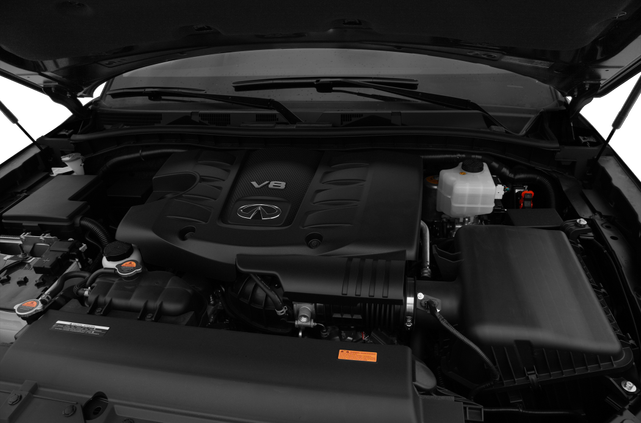 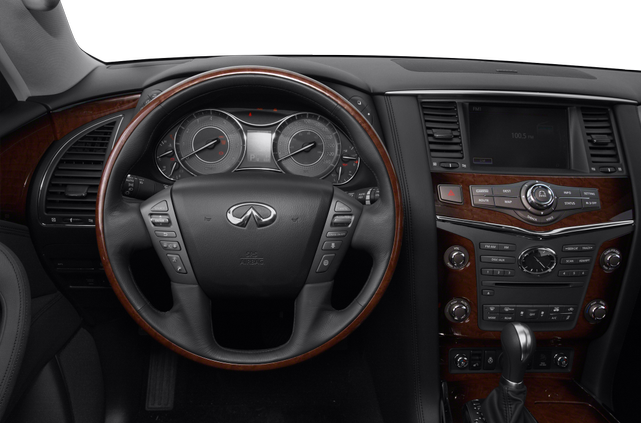 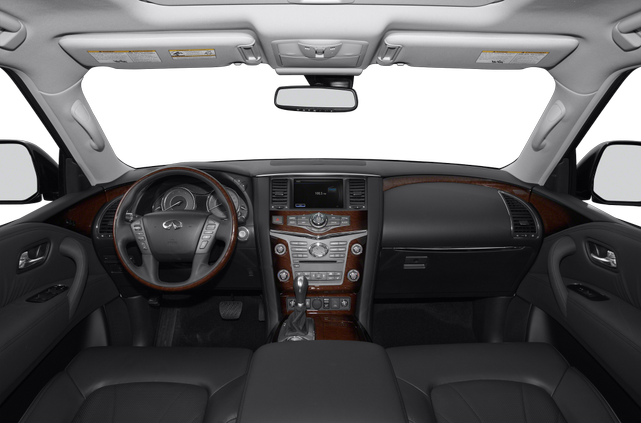 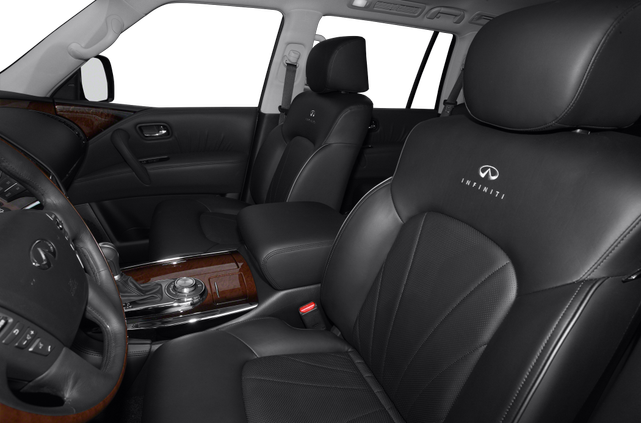 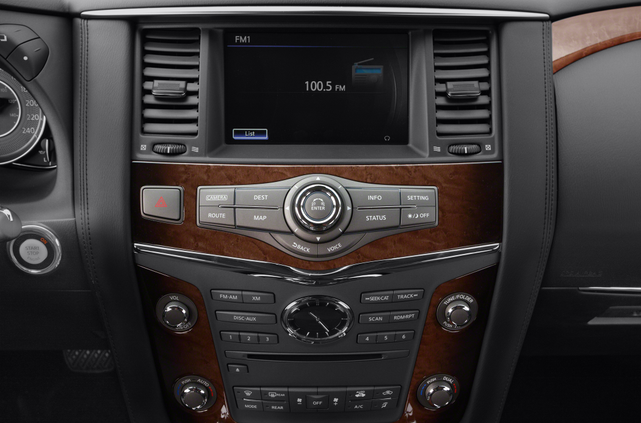 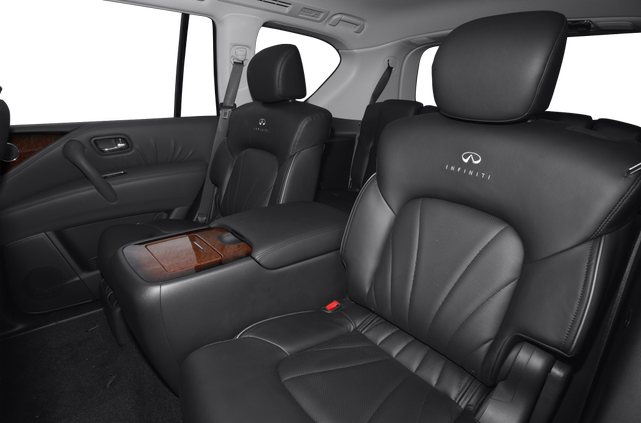 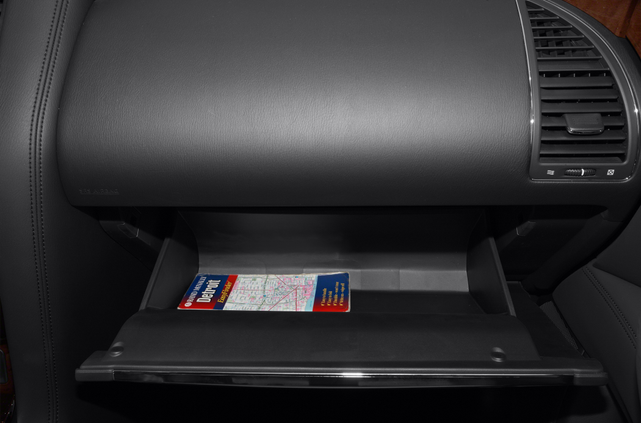 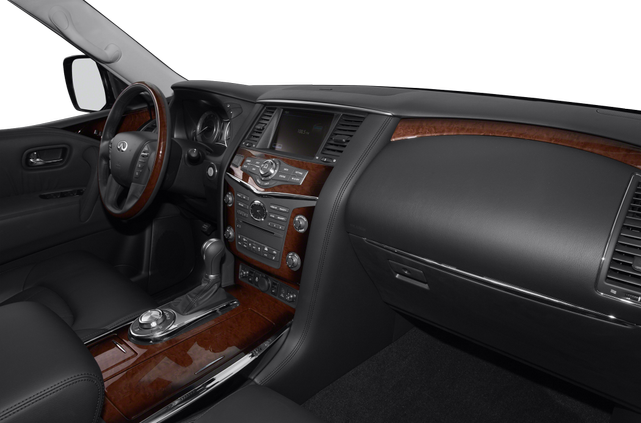 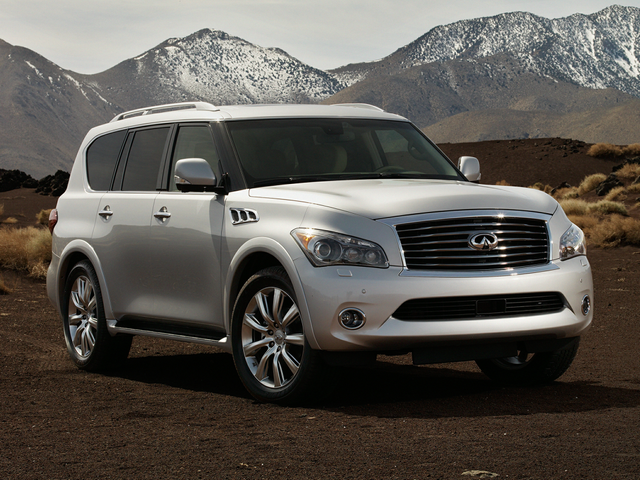 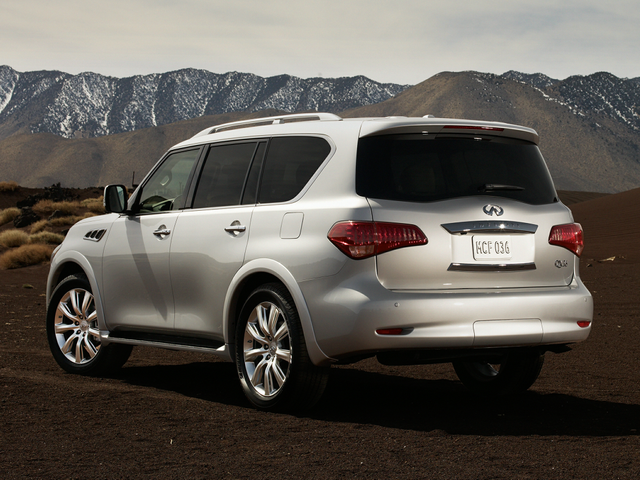 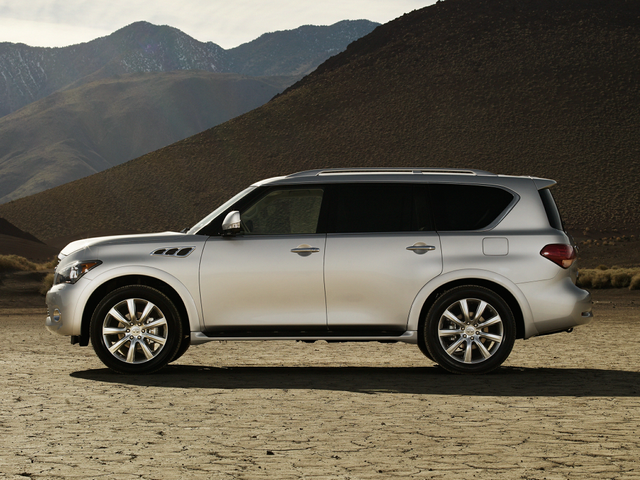 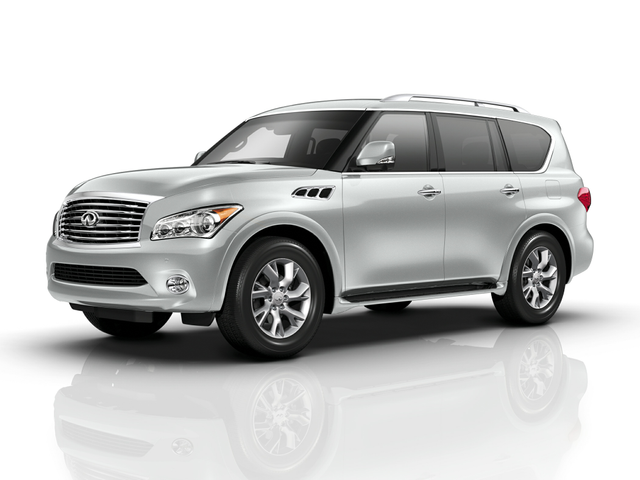 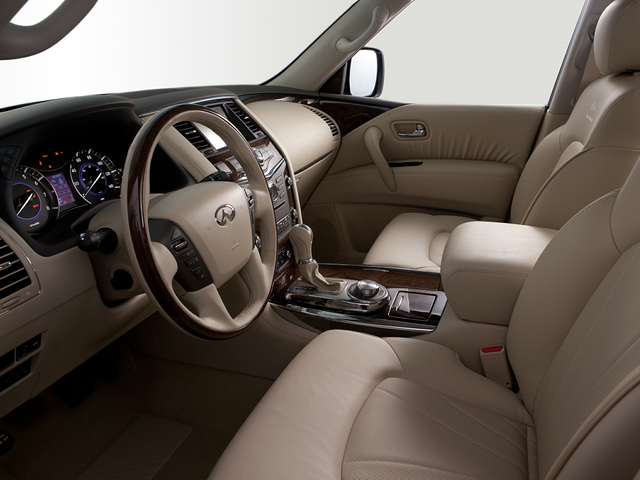 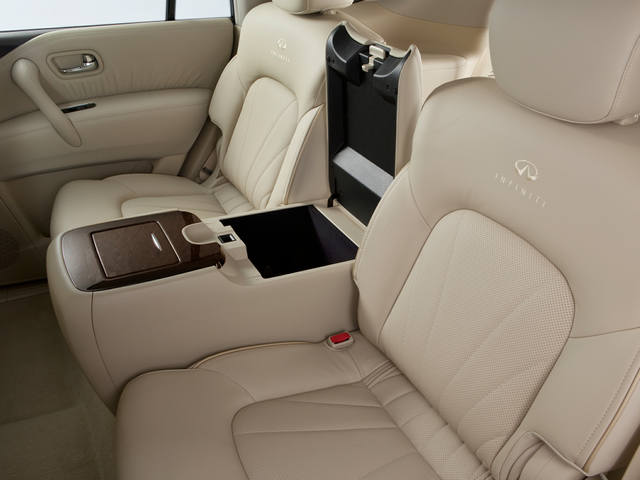 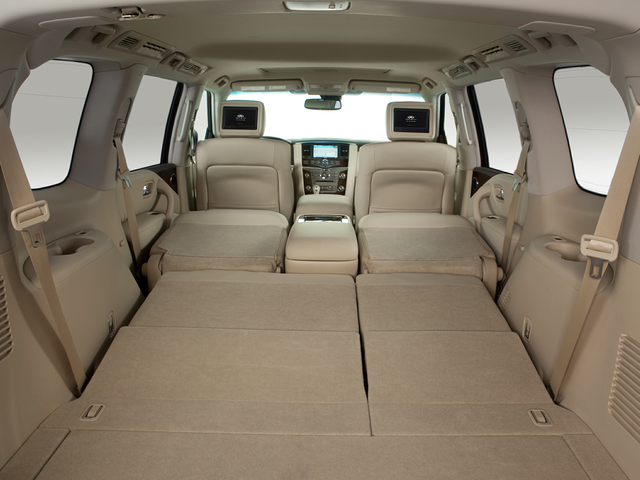