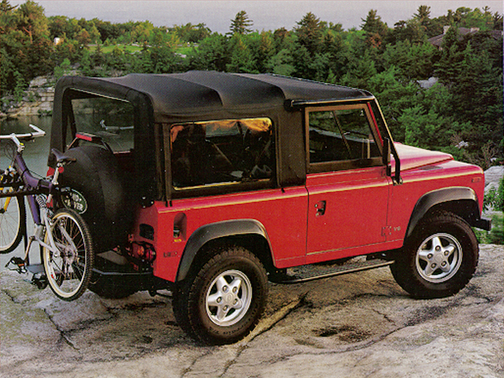 Our 1994 Land Rover Defender trim comparison will help you decide.

The other is this week’s test vehicle, the Defender 90, a stripped-down, two-seat convertible with four-wheel drive, a V-8 engine, a stick shift and a reputation for durability and ruggedness that not even Jeep can beat.

The Defender 90 is a direct descendent of the classic Land Rovers that tamed the world’s worst terrain. In such areas as the savannas of Africa, the jungles of Tasmania and the deserts of the Middle East, Land Rovers are one of the few means of dependable transport.

Land Rovers are also the vehicle of choice for the British army, as well as military and police forces the world over.

I could write an entire review about how crude the Defender 90’s accouterments are. The interior – sans carpeting, roll-up windows, a padded dash and a civilized air-conditioning system – is about as sparse as they come.

But to dwell on such things completely misses the point of this vehicle.

If you want plushness in an off-roader, you can get the Discovery for about the same price.

The Defender 90 has one purpose: To take you, a companion and a load of outdoor equipment (tents, fishing and hunting gear, for example) anywhere you want to go.

The Defender 90 is one vehicle that you must get in the proper frame of mind to appreciate. If you wear a shirt and tie and drive it to work, you’ll probably hate it.

But don a pair of boots, jeans and a khaki shirt and climb into the Defender, and suddenly your sense of adventure comes alive.

With the Defender, you must think of the road as an inconvenient but necessary intrusion between off-road areas.

The folks at Land Rover aren’t trying to pitch the Defender 90 as anything more than it is: a specialized vehicle for serious off-road buffs. They expect that the Defender will be a second or third vehicle and not one that will likely see everyday use.

The Defender 90 comes with Rover’s 3.9-liter aluminum V-8 engine, a smooth, lightweight and powerful motor and a five-speed manual transmission. No automatic is available.

As with the Range Rover and the Discovery, the Defender 90 also comes outfitted with a permanent four-wheel-drive system that features a manually locking center differential, which distributes power to the wheels.

The fuel-injected engine is rated at 182 horsepower, and it delivers terrific low-speed power.

The Defender is one of the few vehicles I have had a better time driving slow than I did driving fast. Over bad terrain the vehicle seems to love to churn along slowly while it devours bumps, hills and t hick sand.

On the road, shifting can be a little tiresome. The clutch is heavy, and the gears are not always easy to engage while shifting.

If you are interested in the Defender 90, look for one that was built after the first of the year. In January Rover changed the gearbox from one it had been using for about 20 years to an all-new five-speed that makes shifting easier. Land Rover spokesman Bill Baker said the clutch used with the new gearbox doesn’t require as much effort.

Fuel mileage came in at 14 mpg in the city and 16 on the highway.

For the most part, the Defender’s ride is punishing.

Because the Defender has a short92.9-inch wheelbase and sits high off the ground, the ride is very choppy on the road. That’s why driving this vehicle on a daily basis might lead you to dislike it in a hurry.

Except for four-wheel disc brakes, it seems as if Land Rover engineers made little effort to configure the Defender 90’s suspension u derpinnings for commuters. Doing so, one suspects, might have compromised some of the Defender’s off-road capabilities.

Yet steer the Rover off the road and you appreciate its superstiff suspension system. The system gives you the control you need to take this vehicle over terrain that would stop other off-road vehicles.

The Rover is best when the differential is locked in low gear, and the transmission is in first or second. Moving slow through thick sand and over steep inclines is a blast. I can’t think of a vehicle that can handle this kind of terrain better.

In fact, the Defender 90 won Four Wheeler Magazine’s 1994 Vehicle of the Year Award.

The steering and brakes are heavy and offer a trucklike sturdiness.

Our test vehicle was assembled well, but don’t take that to mean that it is a user-friendly vehicle.

Because Defender’s makers focused on durability, there is very little use of plastic. Such things as the exterior door handles are made of thick aluminum, and they require much effort to use.

There’s no carpet. The seats are covered with a waterproof material. The optional ($1,895) canvas top does a barely adequate job of protecting you from the elements. Drive the Rover at highway speeds and you’ll hear plenty of wind noise as the snap-on top flaps in the breeze.

The removable door windows don’t roll down. Instead, they slide forward on a track.

The rear area behind the seats has a thick rubber mat that covers the floor. There’s plenty of room for cargo back there. I was able to transport a bicycle without laying it down.

There aren’t many luxuries. An AM/FM cassette radio is standard. It isn’t mounted on the dash; it is located between the bucket seats in the locking center console.

Our test Rover came with an optional ($1,650) dealer-installed air-conditioning system. The unit did a fair job of cooling the interior.

I found the seats to be comfortable on along road trip and in an off-road test. Visibility with the top up is good.

Truett’s tip: The Land Rover Defender 90 is tough, rugged and powerful, but it’s a bit crude on the inside. Although the Land Rover is somewhat pricey, few other vehicles can travel through rough terrain as easily.

This vehicle is the perfect topless off-roader. It took six months to convince my wife to let me buy one but now she wants to drive it every chance she gets. I was lucky enough to get one with low miles (53,500) and also with the original owners manual (which is a fun read). I was told it takes regular gas and have been using this with no trouble but the book says 92 octane. I will probaly switch to high test since I only use about 1 tank per month. Why risk engine damage for $4 pet tank.? I plan to keep mine forever and drive it where it was meant to go!

Six years into ownership of my '94 Defender 90. It is by far, the coolest truck on the road. But don't take my word for it. Ask the hundreds of people who have given me the thumbs up, smiles, waves, double-takes, stares of jealousy, stares of admiration and all the combinations thereof. I agree with other reviewers, the scarcity of the vehicle places you in a unique class. More importantly, it makes the vehicle not just maintain its value, but actually increase in value! How many other trucks can claim that? Very few, that's for sure. However, and it's a big however, don't expect it to be plush, quiet or comfy. It was never intended to be, nor does it pretend to be. It is a workhorse elsewhere in the world and a fantastic, fun to drive truck in the states.

the add says its a 4.0 engine but in the pictures with the hood open you can see a 3.9 engine on it.

All model years for the Land Rover Defender 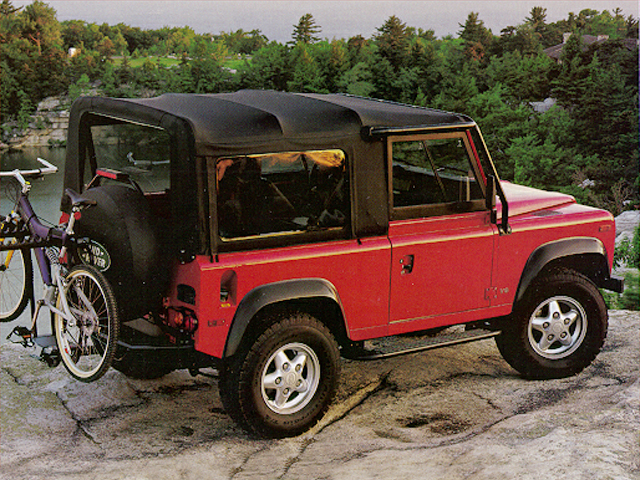