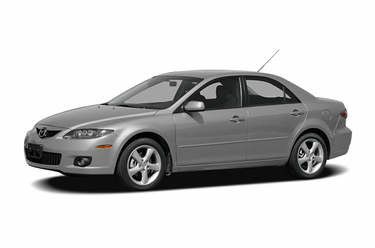 GREAT Car for the money.

For this amount of money I could not recommend any car that I would consider to bet the Mazda6. Bought new in 2006 and still like the car.

January 17, 2008
By Satisfied Mazda owner from Iowa
Owns this car

I was ready to trade in my '00 Mazda Protege after 130,000 very satisfied miles for something with a few more comforts, and would have been hard-pressed to go with another brand. I browsed for a couple months, comparing almost new 6's, Accords, Grand Ams/G6's, etc., and also slightly older used Euro cars like the A4 and C230. Since the latter can be hard to find here in the midwest, I was narrowed down to basically Accord vs. 6 by default, and to me the 6 wins on style points, with everything else being pretty equal. Eventually I found an '06 6s (V6) that lived for about 30k miles as a rental. I was cautious about buying a former rental, but the test drive was great, and everything's been great since. The V6 won't slam you back in your seat like a pure sports car, but there's plenty of power and torque there for some spirited acceleration, and the automatic transmission is a 6-speed with sportronic shifter which helps it get 25 or so highway MPG. The weeked after I took delivery, I went on a 600 mile road trip and it got more than 400 miles on the first tank of gas doing 75-80 mph most of the way. The combination of traction control, ABS, and the shifter is great when the roads get slick. You can start from 2nd to keep the RPMs a little lower and the traction does the rest. Like others have written, I'm sure I'll like the 17 inch alloys and low profile tires a little less when it's time for a new set of tires, but for now they look great and add to the sporty look. My only real gripe is it would be nice if there was a standard iPod hookup. For now I'm fine with a good FM transmitter adapter which fits perfectly in the extra power adapter located in the center console/armrest. I've had my Mazda6 about 10 months now and driven it about 10,000 miles, bringing my total behind the wheel of Mazda vehicles to 140,000, with no major mechanical breakdowns (on the Protege, I replaced brake pads once and broke a stabilizer bar link sliding into a curb on the ice, and that's all). I have been an extremely satisfied customer, and may have to look into a certain rotary-powered sports car next.

I love it but the tires----OUCH

I live in one of the SNOWY states. This car is definitely intimidated by snow covered hills. So off I go to by snow tires---$758 dollars later I am re-thinking this "station wagon that thinks it is a sports car" thing!

This has been a fantastic car for us. Absolutely no problems and has pretty good pep for a 4 banger. Very roomy and well designed inside and out.

November 19, 2006
By lkyled from Minneapolis, MN
Owns this car

Great Handling, most comfortable in it's class, very economical for the power. I test drove a Nissan Altima, a Honda Accord, a Toyota Camry. The ride comfort of the Accord was sub-par, the price and selection of the Camry was poor, and the Altima was just about 1,000 more.

September 6, 2006
By michiganger from Annarbor, Michigan
Owns this car

I just got a mazda6i 5door for my 16th birthday. So far i love it. the feel of the car is great, although it isnt a V6 it sill is a fun drive. You can only tell the difference between the two engines a little bit but to tell you the truth i think that if gas is a concern to you the mazda 6i is a great choice. the V6 avereges around 19 where the i gets at least 24, but these numbers vary with every driver. I got tired of driving my mothers cadillac because it just dint drive like a sports car this car drives so much better to me. Although im very greatful if i were to change one thing is that i would have gotten the 07 model because they come with more options in the lower price range. I know it doesnt make much since but the 07 models are a little cheeper than the 06's pros: the bose audio, 6 disk cd player, the drive, the reliability of the car is also exellent if your car for what every reason breaks down or you run out of gas then you call their 800 number and theyll send assesetance right away, and also the car is traceable if it were ever to be stolen, and everything else i might be forgetting. cons: just that since we have a 2car garage i have to leave my car out in the drive way and with the cloth seats it gets kindof cold i wish i would have gotten leather heated seats ...... but thats really a con of the mazda6 in generall. But really i have no real problems with the car at all, I love it!

Handles like a sports car, esp. on twisty country roads, FUN to drive and as comfortable as a big highway cruiser on long trips. My opinion: you don't need the V6 (do your part for the environment and your wallet); the 4 is sufficient and when you need to punch it it really takes off. Mileage from 23 to 29 mixed highway/city and with and w/o a/c. 3,200 miles and so far not a squeek, rattle or problem. Perfect size vehicle, plenty of room yet agile; can't beat the versatility of the hatch. Excellent driving position; very comfortable seats. Very quiet. Transmission nice and smooth. Some favorite features: Sequential sport shift, power driver seat, 6-CD Bose stereo, moonroof, lowering windows from key fob, very nice quality cloth seats (I prefer this to leather), fold flat rear seats - all the room of an SUV or a big station wagon when you need it. On the downside: bad rear over the shoulder blind spot; side mirrors don't retract (very bad living in NYC); turning radius is annoying but not horrible; dismal color selections on 5-door models; Mazda should offer XM radio. Did not want red dashboard lighting but now I kind of like it! We tested many cars: Audi A3 & A4, Acura TSX, BMW 3 series and the Mazda3, PT Cruiser & Toyota Prius. Looked at the new Lexus IS, Acura TL, Hondas, Nissans, Toyotas, Infiniti G35. Nothing beat the Audi engines but they are cramped. And good luck trying to sit in the backseat or fitting your stuff for a weekend getaway in the BMW or Lexus. The PT didn't feel right to me; Prius felt shaky on the highway; the TSX is a beauty but seats are tight (narrow like the A3 - and I'm not a big guy) and none of the others have hatchback versatility, except the Mazda3 of course which we loved. We narrowly chose the Mazda6 over the 3 because it was roomier - felt more substantial (although I am reminded of this decsion a little more often than I'd like!) This car does it all. One thing missing: stability control, but I began to hydroplane on the highway in a rainstorm and it seemed the traction control kicked in. We are very happy with this car and I highly recommend it. Be sure to get the 5-door.

July 18, 2006
By jattjatt from california
Owns this car

great handling and turning especially in freeway. price for this car good and features is nice, but needs a little brighter red lights for driving at night can't hardly see much...

Very comfortable ride and handling; superior to other mid-size brands that I test drove. Fuel economy combined city/highway mileage is 26 mpg. The 4 cylinder may not be as peppy as the 6 cylinder, but is more than adequate to get the job done and has a very smooth shifting transmission. Exterior styling is excellent. Interior styling is good. Instrument cluster is easy to read and well lit. Interior courtesy lighting is great. Need more head and leg room in rear seating area. Quality of fabric on seats needs to be upgraded. If I could have a wish list for improvements for the Mazda 6, I would ask for an upgraded base radio, a large-retractable glove box like the Mazda 3, better seat belt fit/position in front seats for a petite person, voltage outlet that allows you to charge a cell phone while car is not physically running (a great way to charge a cell phone during a Florida hurricane when there is no electricity), and a vehicle entry design that would allow someone 6'3" to get into the vehicle's front seats without being cramped upon entry. I am very happy with the Mazda 6 performance/styling and would highly recommend this vehicle.

I have had this car as a daily driver for almost 3 years. I put 110 miles on it a day and I love the looks and how it drives. The big problem is that they all no matter what year have fan control modules that keep going out on them and need to be replaced. Mine is on its 4th! It is even happening on new ones too! WOW they have got to get this right soon! I am starting to wish I bought a subaru GT instead. Their relability is far better it seems.