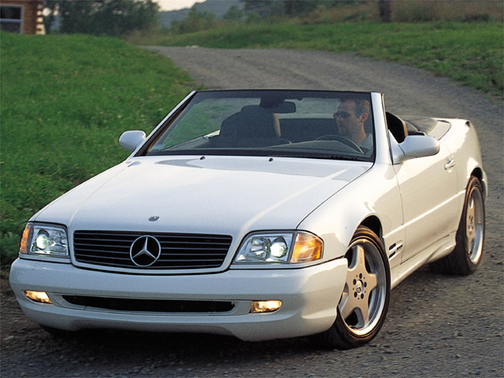 Our 2001 Mercedes-Benz SL-Class trim comparison will help you decide.

I used to chuckle at Mercedes-Benz drivers. To me, the sight of the cars either meant a rolling midlife crisis or something comparable to a weekend duffer bringing a $6,000 set of clubs to the public golf course. I mean, do you reallllllly need all that?

Now, after having driven a string of Mercedes-Benz automobiles, I’ve become one of those motorists I used to laugh at. It must be some kind of Mercedes virus — either that, or prolonged exposure to the automaker’s luxury loaded cars prompts a bizarre addiction to the point where you find yourself saying things like, “What, no navigation system in this one? How gauche!”

At any rate, those who long for Mercedes’ storied engineering happily have many choices — from the merely pricey to the obscenely expensive. Here’s a look at the models I have sampled from the Mercedes lot:

It’s a cute little five-passenger model from the C-Class. Oh, and it’s a steal in Mercedes terms with a manufacturer’s suggested retail price of $29,950.

The V-6, by the way, more than handles what the local roadways dish out (sequential multipoint fuel injection helps, of course), and the C240 can be dressed up with various four-figure options to make it a more-worthy road warrior.

Even with the base $29,950 version, you still get top-drawer M-B engineering, and the technicians at the elegant Mercedes-Benz service centers give you the same attention as those drivers bringing in six-figure-priced machines.

People prowling for an entry-level Mercedes will have more to cheer about soon as the C-Class Coupe reaches American shores in numbers. That will be a bargain-basement offering among Mercedes vehicles, starting around $26,000.

To be precise, it’s a five-passenger sedan with a long wheelbase (121.5 inches). But it’s a light year removed from the C240, with the “AMG” designation being the tip-off. AMG is M-B’s high-performance division, and in the S55, that translates to a 5.5-liter V-8 laying down 354 horsepower and 391 pounds/foot of torque (at only 3,000 revolutions per minute).

And there’s the pleasure of watching a sports-car-driving wacko disappear in your rearview mirrors when you apply the power to your classy looking family sedan.

Still trying to digest that sticker price on the S55? What’s the big deal?

Here’s another S-Class five-passenger sedan with a long wheelbase, but with a 362 horsepower V-12 and a navigation system, the sticker price jumps to $115,945.

Putting a right foot deep into an accelerator hooked up to a V-12 is an experience every motorist should experience at least once. It almost makes the drawbacks worth it. Those would be fear of parking within 10 feet of other vehicles, insurance bill terror and an overwhelming urge to rush outside every five minutes to see if anyone has put a ding in your car.

One other thing: The car has so much on it that it will take you at least three months to master every tech goodie explained in the owner’s manual.

Here we g Much more reasonable. This SL-Class coupe/roadster carries two passengers and starts at only $83,800.

I know what you’re thinking. This is a rich person’s toy. You’re 100 percent correct, and what a toy it is! Nothing stirs the automotive journalist’s soul like having momentary possession of a vehicle utterly beyond the reach of his income.

For those fortunate enough to pay the fare, the SL500 package includes a 302-horsepower V-8, independent damper struts on the front, rain-sensitive windshield wipers, headlight washer/wipers and a security system that does everything but write up an arrest report on the prospective offender.

Throw in an extra $2,500 for a “Silver Arrow Edition” option, and you get amenities such as a bulletproof silver paint job, a six-CD changer and six-spoke wheels so dazzling that sunglasses are mandatory equipment for viewing.

This is the ultimate in the Mercedes-Benz test-model lot. The mother lode. The Holy Grail.

The four-passenger coupe with a 362 horsepower V-12, the full range of techno goodies and a 600-pages-plus owner’s manual that only those with advanced degrees in automotive engineering will fully understand starts at $117,200.

My test model was dressed up with perks that included a tire pressure-monitoring system, an electronic trunk closer, “Distronic” adaptive cruise control (which automatically adjusts for distance between vehicles while in cruise control) and AMG-added enhancements that brought the bottom line to $127,895.

To be honest, the entire time I had this test model I lived in fear of runaway shopping carts and no-look lane changers. Motorists with more money and bravery than I should know that this coupe represents just about the highest level of current automotive evolution.

Ah, a nice way to finish our tour — a delightful four-passenger droptop with a comparatively easy-to-take MSRP of $48,900.

Getting those two passengers into the back of the CLK320 might be a neat trick, but virtually everything else on this joy ride pleases. Handling for a low-range-priced Mercedes was outstanding. The softtop with a 215 horsepower V-6 held high-speed turns better than the new-for-2002 Lexus SC 430, which starts at $58,455.

Golden State motorists who like to take that dream Big Sur coastal drive on Highway 1 south of Monterey take note: This might be the best car out there for that trip.

October 31, 2019
By Baba from Detroit
Test drove this car

So so. Great for fishing trips. Or grocery shopping. I take my dog to the park every day, he seems to love it. He even pup in it few times. Is great.

Best two-seater convertible in the world...

October 24, 2013
By tcs from Sacramento, California
Owns this car

In my opinion, the 1999-2002 SL500's represent the very best two-seater convertible in the world at any price. Sure there are now metal-retractable-top convertibles, and they're very slick - however, as far as classic rag-tops go, there is nothing that beats the SL500 in all six categories... In the under $100K price-range, there was nothing at the time to beat it - the Jaguar XJS and XK8 are both nice, but the SL is just more solid, more subtle and engineered to perfection. Whether it's competing with a Porsche Cabriolet, a BMW Z8, a Jaguar or any number of other prestige-brand luxury two-seaters, the SL holds its own against convertibles even in a higher price-range, such as late-90's early 2000's Aston-Martins, Maserati's (99-2002), and even the comparable Ferrari's (355 Spyder)... To find a car more competent, fast, stylish AND comfortable is not easy - at any price. I bought a '99 SL500 with 42K miles on it - it has been just stellar. I bought in 2009 for $20K (less than a fifth of its almost $100K new-car cost). Fast, fluid, fun - and safe, reliable and efficient... People don't buy these for the gas-mileage, but they are as efficient as anything new in the same class - I get over 20mpg average, and that's with a 300hp V8... Even the brand-new models don't do much better. In any case, I cannot fault this car in any category - the styling, both inside and out, is timeless, elegant and sporty. The car rides beautifully, is hushed at all speeds, handles nimbly (especially for such a heavy car) and feels solid as a vault. Although I had to do a fair amount of maintenance to get the car perfect when I bought it (such as power-top actuators, etc.), there were no surprises, as we had the car inspected. A properly-maintained car is incredibly reliable and durable - they are built to deliver lots of trouble-free motoring, and they are just about the classiest thing out there. Although this model (99-02) is now passing the ten-year mark, it is still so modern in every respect - from performance to comfort and safety... The only thing it doesn't have is Navigation and parking sensors - two things I've never missed, as the car is a very modest size (easy to park), and it's easy to use a smart-phone for navigation... Bottom-line: the safest, most reliable convertible of this genre - a beautiful, elegant car that still holds its own thirteen years later...

I bought a 2001 500sl that had been babied throughout its life. Just broken in at 36K mile. Biggest suprise was when I stepped on it and the front end started to come up a bit! Two small problems. I think the rear visibilty could be better. The suspension lowers a bit when the engine is switched off. If you have parked so that the front spoiler is over a curb or one of the concrete blocks in a parking lot it will lower down onto the block. Then you have to put blocks behind the front wheel to back up and raise up the car off the concrete block. All in all I love this car!

Rating breakdown (out of 5):
3 people out of 4 found this review helpful. Did you?
Show full review
See all 6 consumer reviews 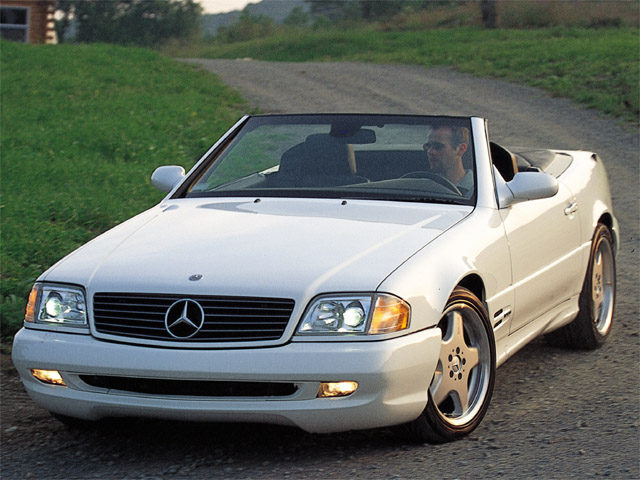 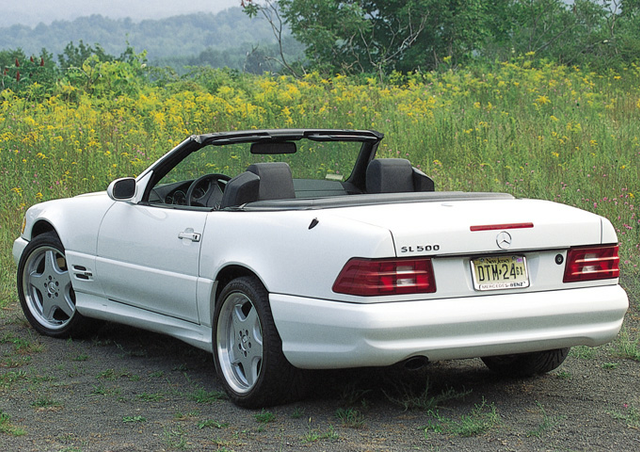 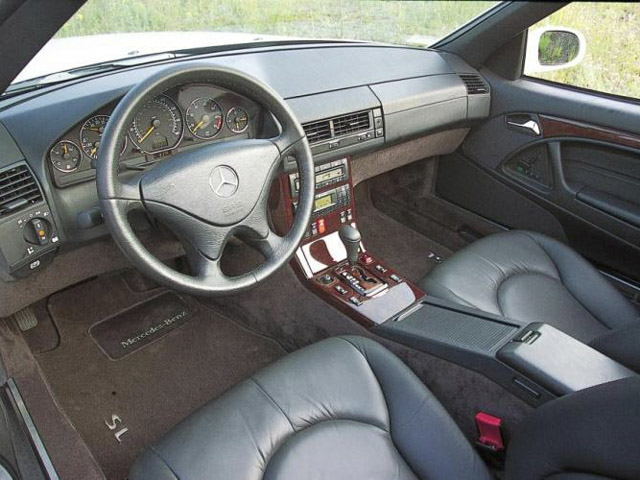