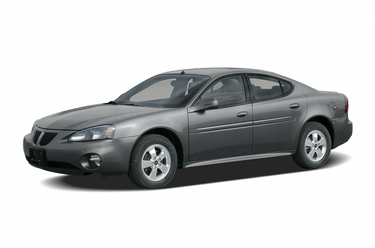 If you're not out buying one yet... you're crazy!

One of the best cars i have ever owned! great comfort, great handling, great car! not as easy to get in and out of if you're taller becuase of how low the car sits, but handle great in rain and snow. I love my car!

GXP Grand Prix Owner - I love with this car!

I've had several Grand Prixs over the years... The first was a base model Grand Prix with the 3.8 engine - I put a ton of miles on this car with no problems at all! Oil Changes and Brakes is it! I then purchases an 04 GTP. This car was fast and got 28 MPG on the highway. The 3.8 SC engine is a rock! I now have a Grand Prix GXP with the 5.3 V8! This car is even faster and gets good MPG as well. The extra's a GXP offers is worth the price. All I can say is the Grand Prix is an excellent car. Each time I've upgraded to the next best model I've been well pleased.

This car as A LOT of power under the hood and easy and cheap to modify. Sleek design inside and out. I don't have kids, but I'm sure it would be a great car for a family. It's a little hard on gas but superchargers aren't for the faint of heart haha. Mine made the clubgp.com 04+ Calander for December. I always feel safe in the car with the airbags and always buckle up.

I had a 2002 Prix before this one and am completely satisfied with all aspects of my 2005 Grand Prix, especially the performance and handling. The Fusion orange metallic paint is gorgeous too.

I've done both in my 05 GTP and it performed great. The car handles great and is quick as heck. With the supercharged V-6 260 HP @ 5,200 rpm and 280 lbs.-ft. @ 3,600 rpm this car can keep up with the best and more higher priced cars. The style of this car is a real head turner. I like the fact there is not alot of emblems on it. This gives me advantage of hiding what the car has under the hood. The inside is laid out real well. I really like the fact you can ajust the drivers seat to your confort level.

has a lot of power for a 4 door vehicle. large car with a sport car feel. a lot of leg room for the front and the back. lighting of the vehicle really light up the road. great handling

Nice, reliable GTP sedan with with a big flaw.

I've owned this 2005 GP GTP for almost a year, and have put over 21K miles on it. It has been a reliable car, that handles pretty well for an almost two ton sedan, and has a lot of power, because of the supercharger. The cabin is pretty quiet, except for the droning of the Michelin MXV4 energy plus tires, that, after about 12000 miles got extremely loud, and make my car sound like an eighteen wheeler. The black and grey interior is really boring, so I applied an aftermarket dash trim kit. The dash and shifter are coordinated well, surrounding the driver in comfort. There is plenty of trunk space and interior seating room. My only serious gripe is a mechanical omission by Pontiac, which to me is a slap in the face. This car is as I said, supercharged, but isn't intercooled. The car is equipped with knock sensors which detect preignition. When the computer detects the beginnings of knock, it temporarily xxxxxxx the timing. This robs me of power and mpg's(not to mention it's hard on the engine itself). GM put's intercoolers on their supercharged cobalts and ions, but doesn't put them on this car, which costs several thousand more than either of those vehicles. The result is that my car had plenty of knock xxxxxx running on 93 octane gas. I had to do some engine modifications myself to get rid of some of this kr. I looked up the grand prix reliability of a couple years ago, and the non sc gp's were among the most reliable, and the gtp sc engined grand prix was among the worst. Maybe the need for an intercooler has something to do with this. Well I seem to have the kr pretty well under control, after plenty of experimenting with engine modifications, but, in my opinion, the engineers at the car company, which happily took my money, should have done the experimenting.