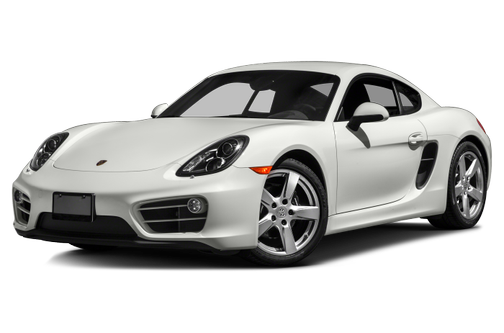 Our 2015 Porsche Cayman trim comparison will help you decide.

Editor’s note: This review was written in May 2014 about the 2014 Porsche Cayman S. Little of substance has changed with this year’s model. To see what’s new for 2015, click here, or check out a side-by-side comparison of the two model years.

The redesigned 2014 Porsche Cayman is more luxurious than its predecessor, but performance-car purists will lament its diluted steering feel.

The Cayman is Porsche’s entry-level coupe, if you can call a car that starts at $53,550 (including a $950 destination charge) entry-level. Unlike the iconic rear-engine 911, the Cayman is a mid-engine car like the Boxster, its convertible sibling.

The all-new 2014 Cayman weighs less and is more efficient than its predecessor, and power is up slightly. It also gets a richer interior. To see the 2014 model’s specs compared with the 2012 (the Cayman skipped the 2013 model year), click here.

We tested a manual-transmission Cayman S, which comes with a more powerful flat-six engine rated at 325 horsepower. This trim level starts at $64,750, including destination, but our car’s as-tested price ballooned to $89,915 with options like a high-end Burmester stereo and navigation ($6,730), Porsche Active Suspension Management ($1,790), 20-inch Carrera Classic wheels ($2,730) and an upgraded Natural Leather Interior ($3,895), to name a few.

How It Drives
The prior-generation Cayman had exceptional steering feedback, which made it a joy to drive. That car used conventional hydraulic power steering, but the 2014 model switches to electric power steering. Porsche says this improves fuel efficiency and “provides direct feedback … while filtering out unpleasant or unnecessary surface irregularities.” The way the old car’s steering communicated everything about the road surface was what made it so magical, but a lot of that magic is now gone, which is a shame.

The 2014 Cayman’s steering wheel has a nice heft to it in corners, but it’s numb when traveling straight and lacks the direct, connected sensation that delighted your fingertips before. Body roll is minimal and the car feels planted, but it’s less enjoyable to drive with the new steering setup. Selecting the Sport Plus mode in our tester made the wheel seem a little weightier, but the difference is minor.

With optional Porsche Active Suspension Management, an adaptive suspension system, ride quality is livable for daily commuting — even with optional 20-inch wheels and low-profile tires. The ride is firm in Normal mode, but it wasn’t punishing on Chicago’s post-winter roads, many of which were rutted and crumbling. Ride quality takes on a harder edge when you press the Sport Plus button.

The engine in the Cayman S remains one of the car’s highlights. The flat-six is smooth and accelerates the coupe forcefully; Porsche cites a zero-to-60-mph time of 4.7 seconds with the six-speed manual transmission. We liked the sounds this engine makes, too; performance cars traditionally emphasize exhaust sounds, but the overriding sound from the Cayman is an ever-present whirring noise right behind your head.

The manual transmission’s clutch pedal and shifter have a weighty feel. It takes a firm foot to press the clutch in and a deliberate hand to change gears, but the setup feels right for this car. It’s also an improvement over the previous Cayman’s stick shift, which felt a little vague when going through the gears. Reverse is up and to the left, next to 1st gear, and one editor didn’t like that there wasn’t a lockout feature to prevent you from accidentally choosing it.

Fuel-saving stop-start technology is new to the Cayman for 2014. It caught me off guard a few times because I thought I’d stalled the car, when in reality the engine had turned off automatically to save gas at a stop.

In the manual-transmission Cayman, when the car is stationary the engine can shut off when the transmission is in Neutral and you’ve released the clutch pedal. The engine restarts as you press the clutch in, so the car will be ready to go when you are. As stop-start systems go, this one is relatively seamless, but it’s still annoying to hear the engine restart again and again. A button on the center console deactivates the system.

For a sports car, the Cayman S’ gas mileage estimates have always been good, and they’re even better for 2014. It gets an EPA-estimated 21/30/24 mpg city/highway/combined with the seven-speed dual-clutch automatic transmission and 20/28/23 mpg with the manual. The combined rating for both is 1 mpg higher than before. I got about 20 mpg in our manual-transmission test car in mixed suburban and highway driving. Manual-transmission versions of competitors like the 2014 BMW M235i and 2014 Lotus Evora are rated 19/28/23 mpg and 18/26/21 mpg, respectively, and the automatic-only 2015 Jaguar F-Type coupe gets 20/28/23 mpg; to see these cars compared with the Cayman S, click here.

Interior
The cabin might look small from the outside, but the two-seat Cayman can comfortably carry taller people. I’m 6 feet 1 inch tall, and I easily found a comfortable driving position. Our test car had 14-way power-adjustable sport bucket seats, a $2,320 option, and their firm cushioning provided good support without being uncomfortably hard. The side bolsters hold you in place in corners, too.

Getting in and out of the car — even if you’re relatively nimble — is a challenge. You have to get low to get inside, and getting out is an awkward process that requires pulling yourself up and out of the seat.

Visibility is good for a small coupe. The Cayman doesn’t have a traditional B-pillar, so over-shoulder views aren’t blocked, and because it’s a small, low-riding car you can use the rear window to help check your right-side blind spot. The available front and rear parking sensors are useful, but we wished our test car had the optional backup camera.

The best part about the cabin is its all-new styling, which is much more luxurious than the prior Cayman’s, with a focus on rich materials and details that weren’t there before. It feels high-rent — as it should considering the car’s price.

It’s not without issues, though. The position of the performance-related buttons on the center console isn’t ideal because you have to look down and away from the road to see them; it’d make better sense to put them on the steering wheel, where there’s plenty of room. The same goes for the Bluetooth controls, which are on the stereo head unit. The turn-signal stalk feels like it’s going to snap off in your hand, too.

Noises aren’t isolated that well, either. That’s fine for the whirring engine noises, which add to the experience, but there’s also significant tire noise on the highway. On ragged post-winter asphalt, you hear all the grit and pebbles that are kicked up by the tires bouncing against the fender liners.

Ergonomics & Electronics
Unlike many other premium brands, Porsche still relies on physical buttons and touch-screen technology rather than integrated knob-based interfaces like BMW’s iDrive.

In addition to the 7-inch dashboard touch-screen there’s a secondary full-color screen in the instrument panel that shows info for the stereo, available navigation system, phone interface and car. A stalk on the right side of the steering wheel lets you easily cycle through all the information. Pairing my iPhone to the car and streaming music using Bluetooth was straightforward.

Cargo & Storage
A side benefit of the Cayman’s mid-engine layout is its front and rear cargo areas. The cargo space under the rear hatch measures 9.7 cubic feet, while the trunk under the hood is 5.3 cubic feet. The combined cargo volume is more than some compact sedans offer. The front trunk is about 1.5-feet deep, and soft-sided luggage, like duffel bags, would make the most of the space.

There are a number of storage cubbies in the cabin, including a few in the doors and one under the center armrest. None of them is very large, though, and would be best used for small loose items like pens and change.

Safety
The 2014 Cayman hadn’t been crash-tested by the Insurance Institute for Highway Safety or the National Highway Traffic Safety Administration as of publication. As it’s a low-volume sports car, it’s unlikely to be tested anytime soon.

The optional backup camera costs $1,515 and includes front and rear parking sensors. A forward collision warning system that can autonomously brake the car to avoid a collision is part of the $2,170 adaptive cruise control system, which is only available on automatic-transmission models.

Value in Its Class
The redesigned Cayman is more refined and looks good inside and out. It’s still rewarding to drive, but it’s not as engaging as its predecessor. The Cayman used to be far ahead of the competition from a driving-enjoyment perspective, but the new model gives up some of that advantage. In Porsche’s quest for greater fuel efficiency and refinement, some of the Cayman’s distinctive soul has been diminished.

Exactly what I was looking for. The Cayman GTS is one heck of a car. Underrated by most, over-delivers to all. Carmine red color is beautiful.

Best car i have ever owned, fast and very comfortable , very reliable , I highly recommend this Cayman, must test drive to love, you will never drive another car again 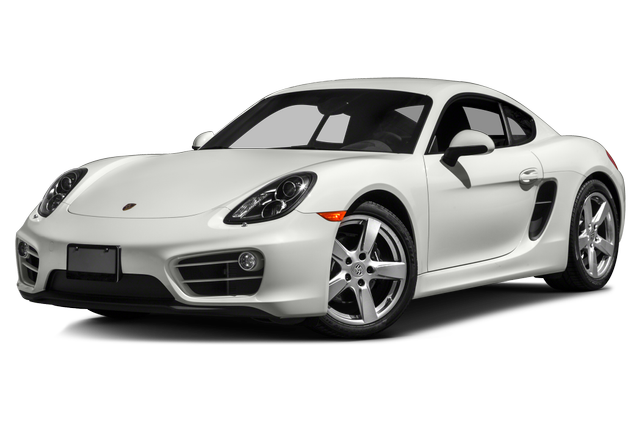 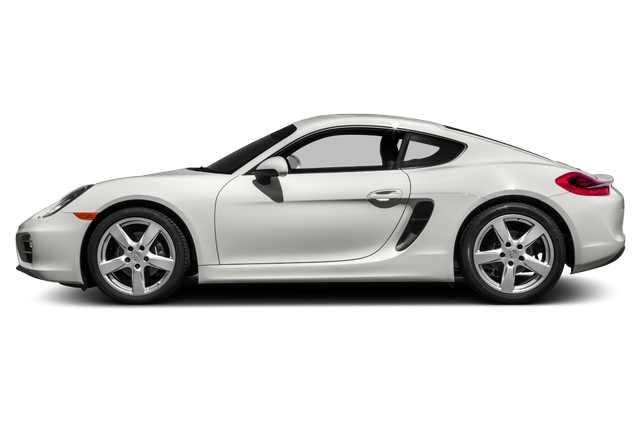 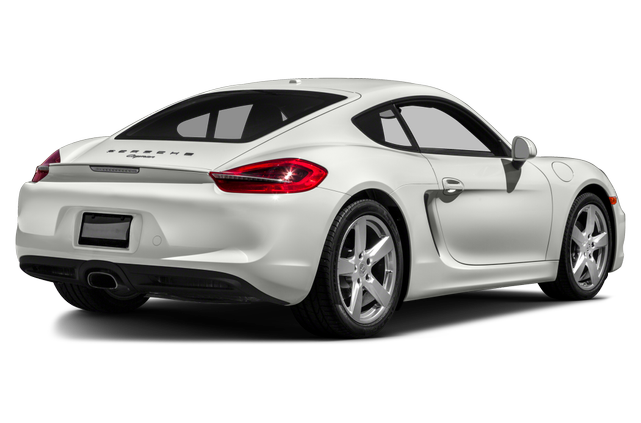 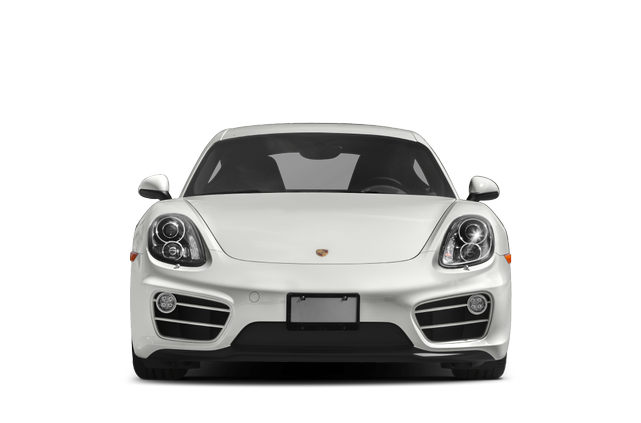 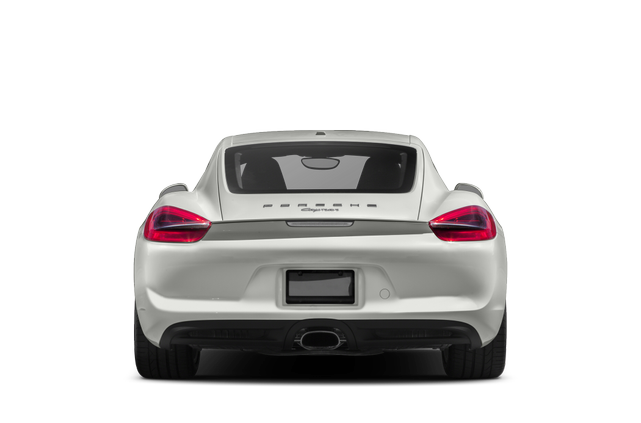 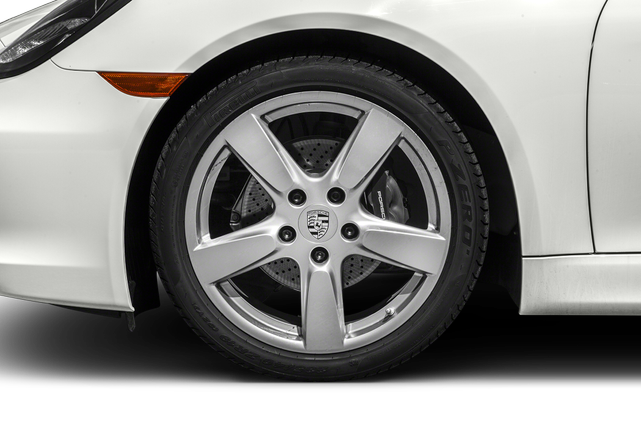 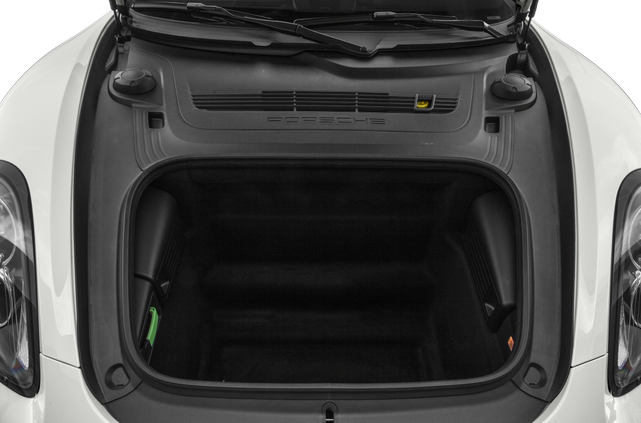 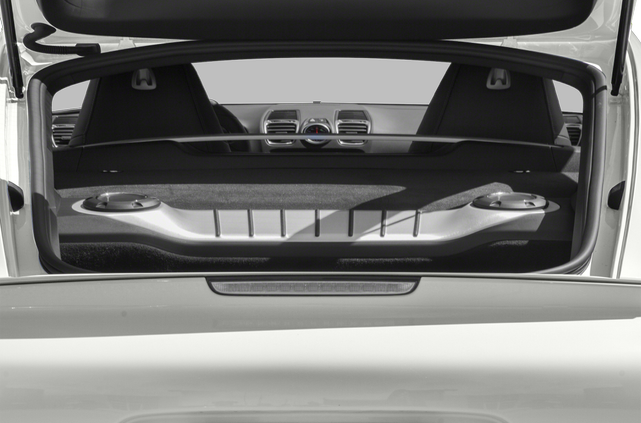 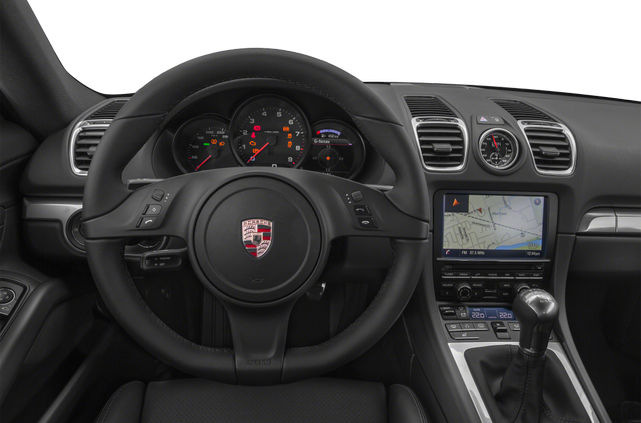 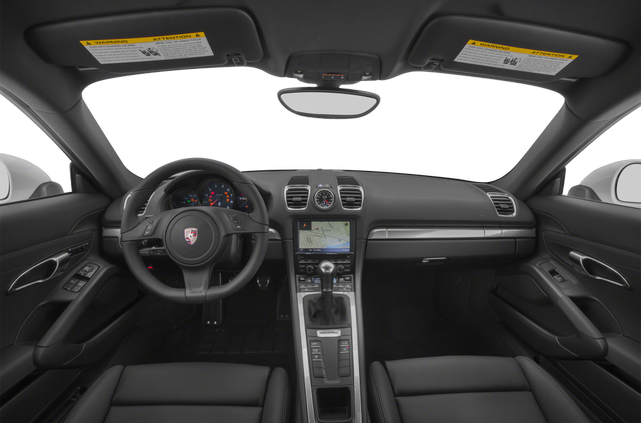 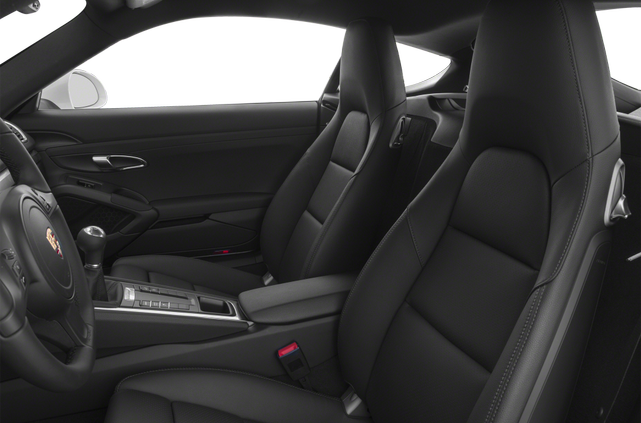 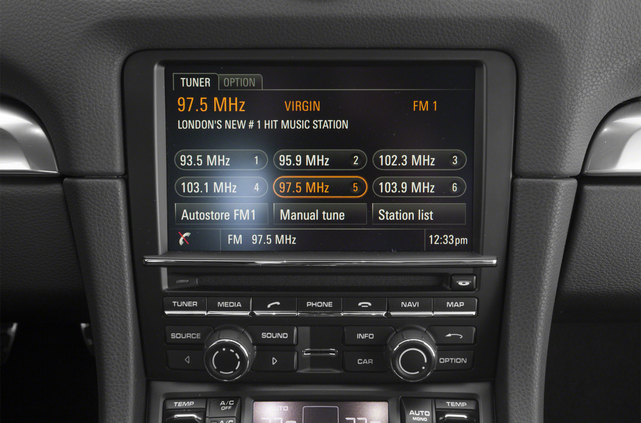 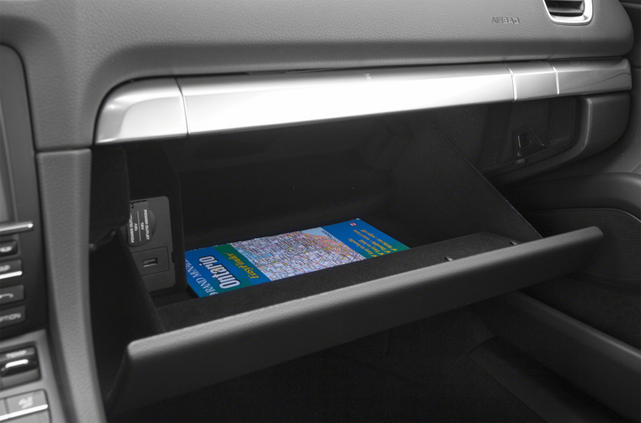 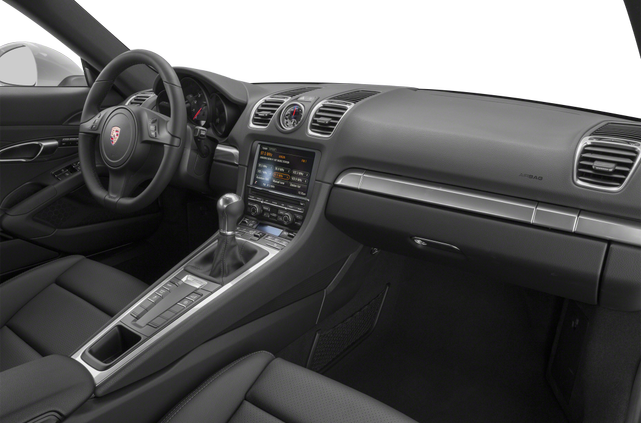 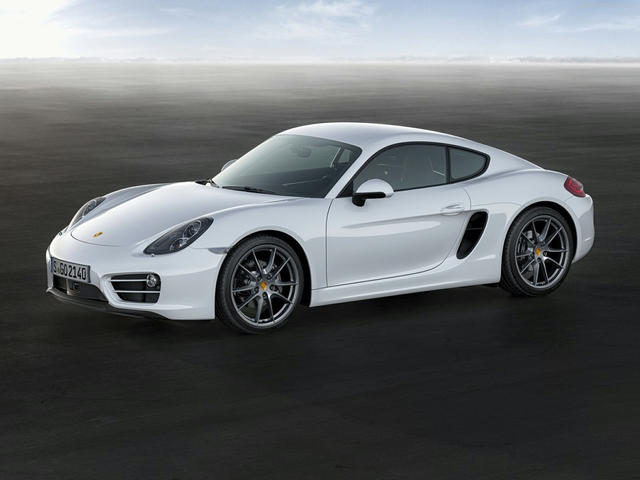 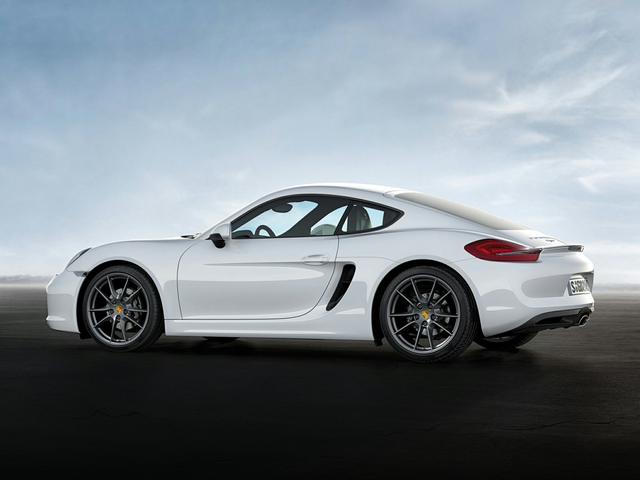 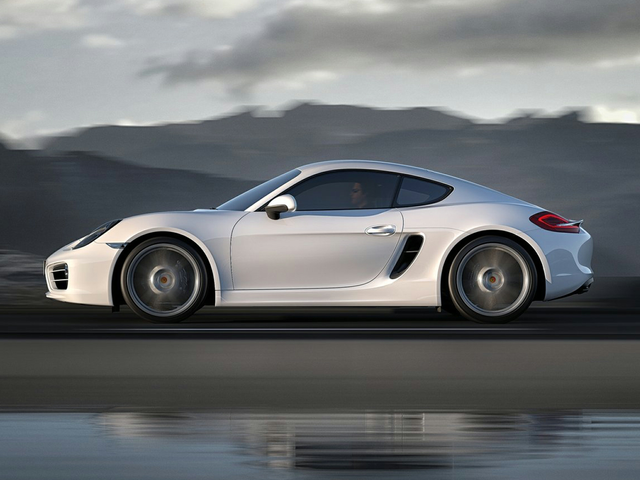 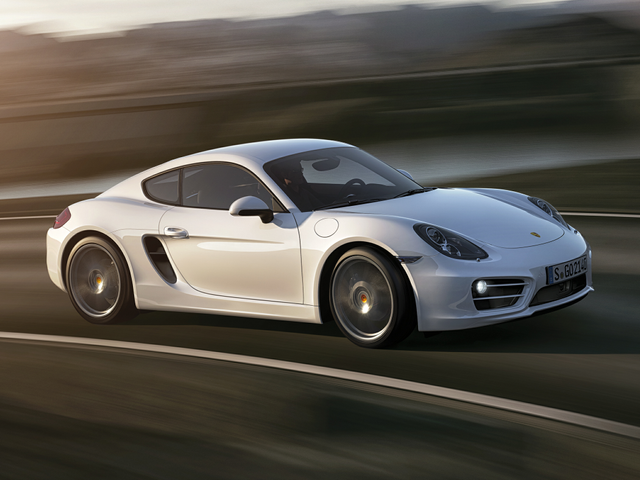 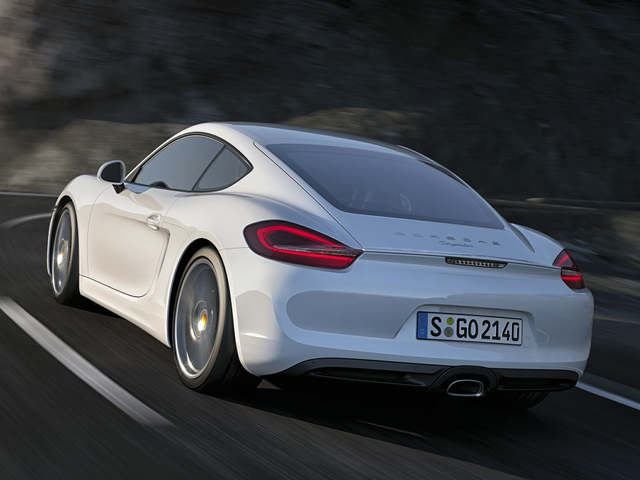