CARS.COM — Honda’s redesigned fifth-generation 2017 CR-V is a better compact SUV by almost every measure, as it needed to be to defend its position at the top of the hottest-selling category in the SUV-crazy U.S. market. The Honda CR-V was a clear winner in Cars.com’s 2015 Compact SUV Challenge, but dropped to third behind two more recent compact SUV redesigns in our 2016 Challenge. In terms of fuel economy ratings, however, the 2017 is a winner. But great ratings in lab testing are one thing, real-world mileage another. So we set out to see how the Honda CR-V performs on the street and on the freeway.

One of the 2017 CR-V’s biggest changes was a new standard engine for all but the base model, a version of the turbocharged 1.5-liter four-cylinder first used in the redone Civic compct sedan, mated to a continuously variable automatic transmission. To move the larger CR-V — heavier by about 600 pounds — the turbo is tuned for a bit more low-end torque and 190 horsepower, 16 more than in the Civic. The new engine drops the CR-V’s zero-to-60-mph time by 1.5 seconds from the 2016, says Honda. It’s still no performance car, nor is it designed to be, but you feel the added power in fast freeway merges or passing. And it feels a lot peppier around town.

But for buyers of these family vehicles, fuel economy is important, and the new powertrain boosts the Honda CR-V’s EPA mileage ratings. The new engine is rated 27/33/29 mpg city/highway/combined with all-wheel drive and 28/34/30 mpg with front-wheel drive (compare to some key rivals here). That improves on the ratings of 25/31/27 mpg with AWD and 26/32/28 with FWD for the base model, which carries over the 2.4-liter non-turbo engine formerly standard in all CR-V models. Helping you get more mileage out of every gallon of gas are active grille shutters, more aerodynamic styling and design components that improve airflow under the car.

For our road testing, the 2017 CR-V was a top-of-the-line Touring model with all-wheel drive, and we didn’t make it easy.

Street miles included a combined 137.1 miles of stop-and-go hops in New York City and Washington, D.C., which have the dubious distinctions of ranking fifth and second, respectively, for time spent going nowhere fast in a recent survey of traffic congestion in U.S. cities.

The 421.6 highway miles were a round-trip in post-holiday traffic with my family at average speeds north of 60 mph in the turnpike corridor between those cities. We had three aboard plus cargo. The weather was cold; automatic climate control was always on. I did not use Eco mode, to keep the comparison to EPA testing consistent. I made some use, as traffic allowed, of the CR-V’s competent adaptive cruise control, which now works down to slow follow speeds. Being able to consistently use it would likely improve gas mileage on a road trip.

So how did it do? The Honda CR-V delivered on its highway promise, coming closer to its 33-mpg rating than I expected given the traffic, speeds and load. It returned 32.0 mpg average on the trip computer in highway-only driving outbound and 31.7 mpg on the return trip. Measured at the fuel pump, the calculation was just slightly lower each way at 31.6 and 31.2 mpg.

In my city driving, however, the little turbo fell well short of the 27-mpg EPA rating, with a combined 20.1 mpg. In this case, the pump calculation was slightly higher at 20.9. I wasn’t shocked; that’s in line with what I get with similar vehicles this size and weight (3,512 pounds with all-wheel drive) on these familiar streets. The CR-V turned out to be competitive in this environment but not the leader it was on the highway.

SUVs at a Price

The results also illustrate the price of our growing preference for SUVs over comparable sedans. The new CR-V and updated Civic provide a good example: They have a lot in common, including — in most models— a version of the same engine and transmission. The new CR-V offers all the things we love in SUVs, such as a high-riding driver position, utility and available all-wheel drive. But it’s worth considering if a comparable but more efficient Civic (compare EPA ratings here) might meet most of your actual needs at a lower cost.

I drove the same city and highway routes with similar loads in the past year in a Honda Civic, an EX-T model with a version of the same engine, and clocked more than 43 mpg on the highway and high 20s in city traffic. A fellow Cars.com editor beat that, averaging 47.9 in a Civic Touring trim in a more moderate drive (50.8 average mph) using the Eco mode and more cruise control. A Civic also will set you back less to start with than a CR-V: The Civic Touring is priced at $27,435 with destination versus the test CR-V’s $34,595 (including all-wheel drive). And for 2017, Honda also is offering a practical Civic hatchback.

Easy to Live With

Still, for value in an SUV, the 2017 CR-V is easy to live with in town and on a road trip thanks to a long list of improvements led by much-improved driving manners. The steering has better response and on-center feel. Turns are tightened from 3.1 turns to 2.3, making it feel more agile on the road and easier to maneuver in tight spaces. A revised and retuned suspension improves both handling and ride comfort.

As is true of most of its rivals, the CR-V is stretching the concept of compact. The 2017 adds about an inch-and-a-half to all exterior dimensions. Thanks to efficient packaging, the interior feels like it grew more than that — particularly in the rear seat, where legroom is up 2.1 inches, and in the cargo area, which is almost 10 inches longer from the front seatbacks to the rear liftgate.

The Touring test vehicle’s interior also is more modern and classier, with upscale materials and matte-finish imitation wood trim (though the “wood” had an unusual metallic look to it). And the interior is much quieter than the previous model thanks to more sound insulation, improved airflow around the vehicle and active noise cancellation standard in all models. Upholding its reputation as a family-friendly SUV, there is abundant storage, including a novel center-console bin with USB connectivity that can be configured for what you want to stow, from covered spaces for devices and gear up to making the whole thing one big bin that can swallow a modest purse. The rear seat gets its own climate vents and a tablet-capable pair of 2.5-amp USB charging ports. 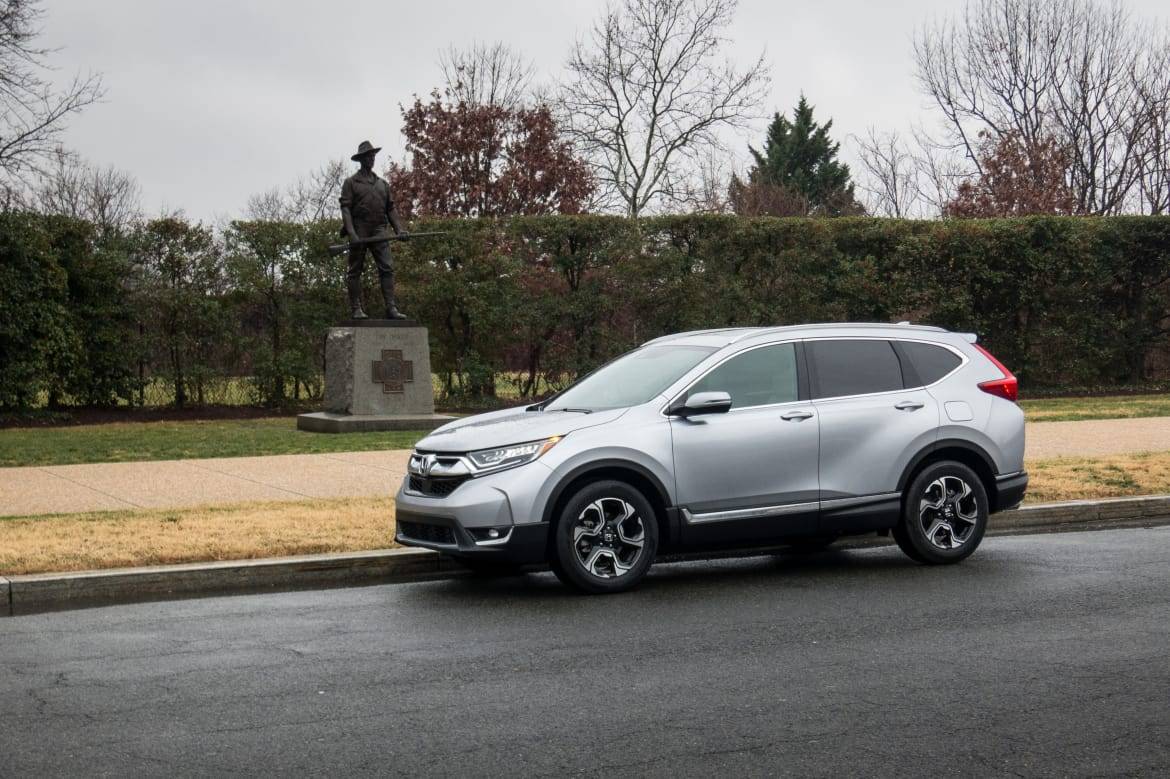 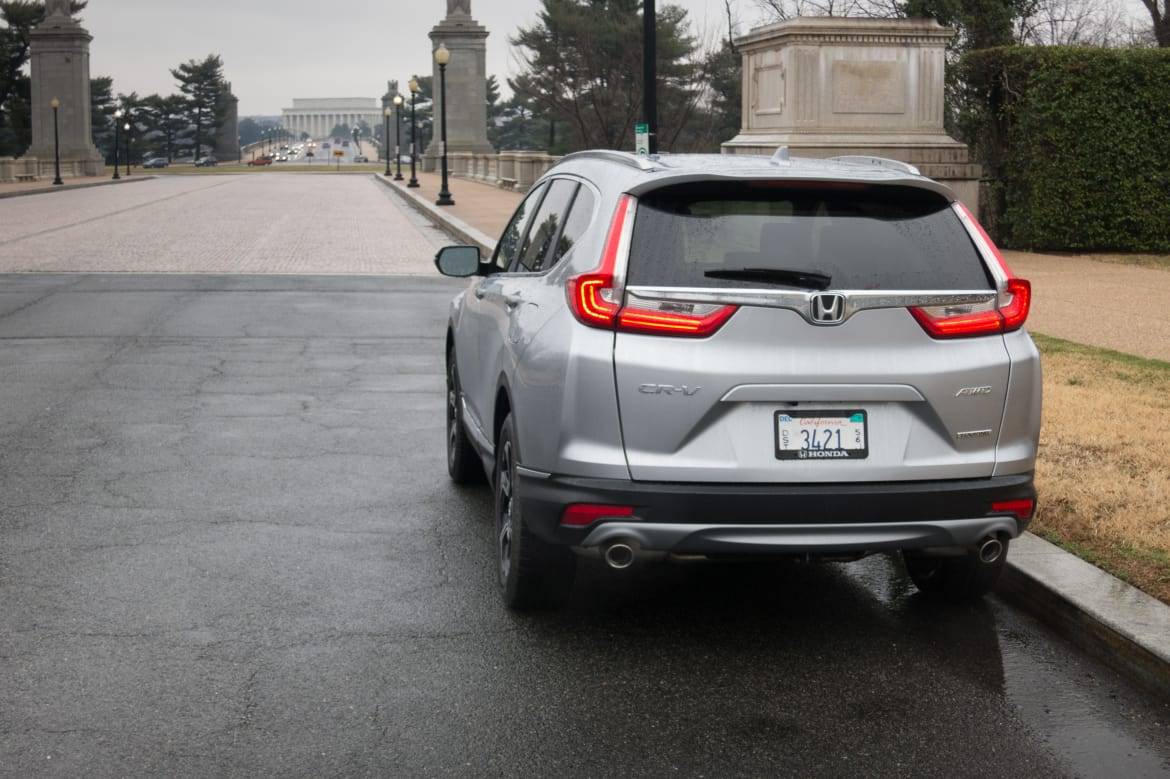 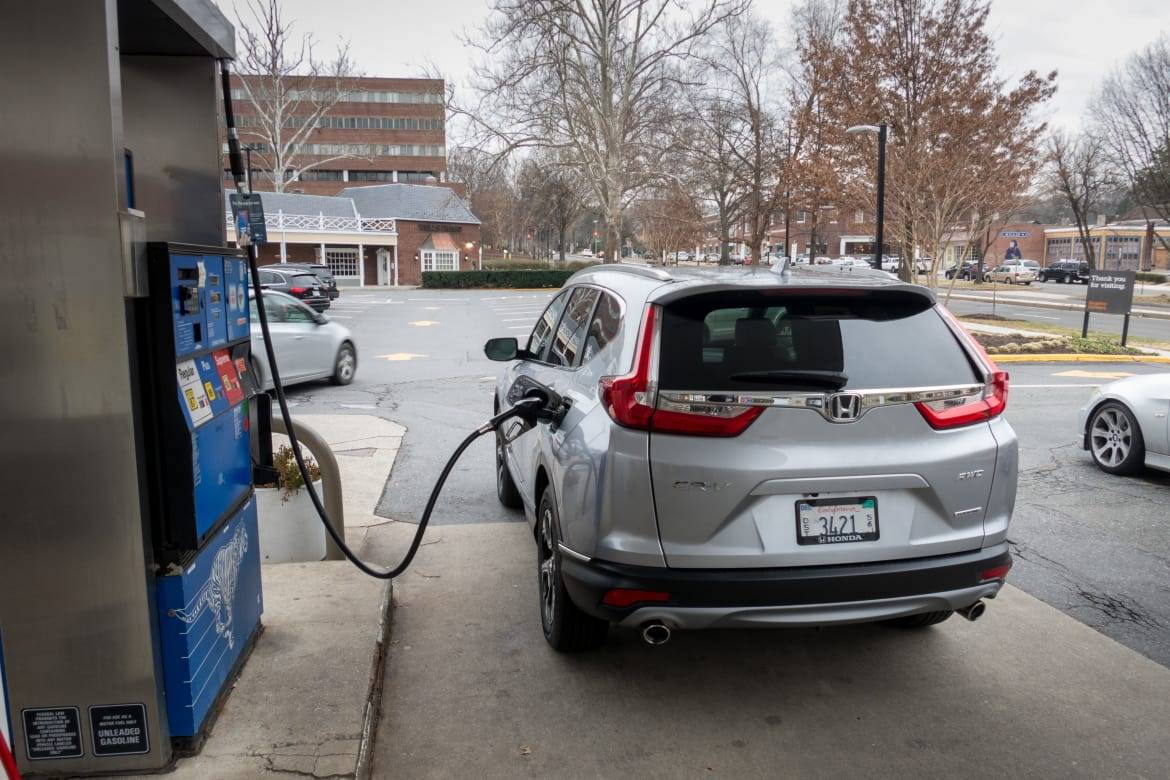 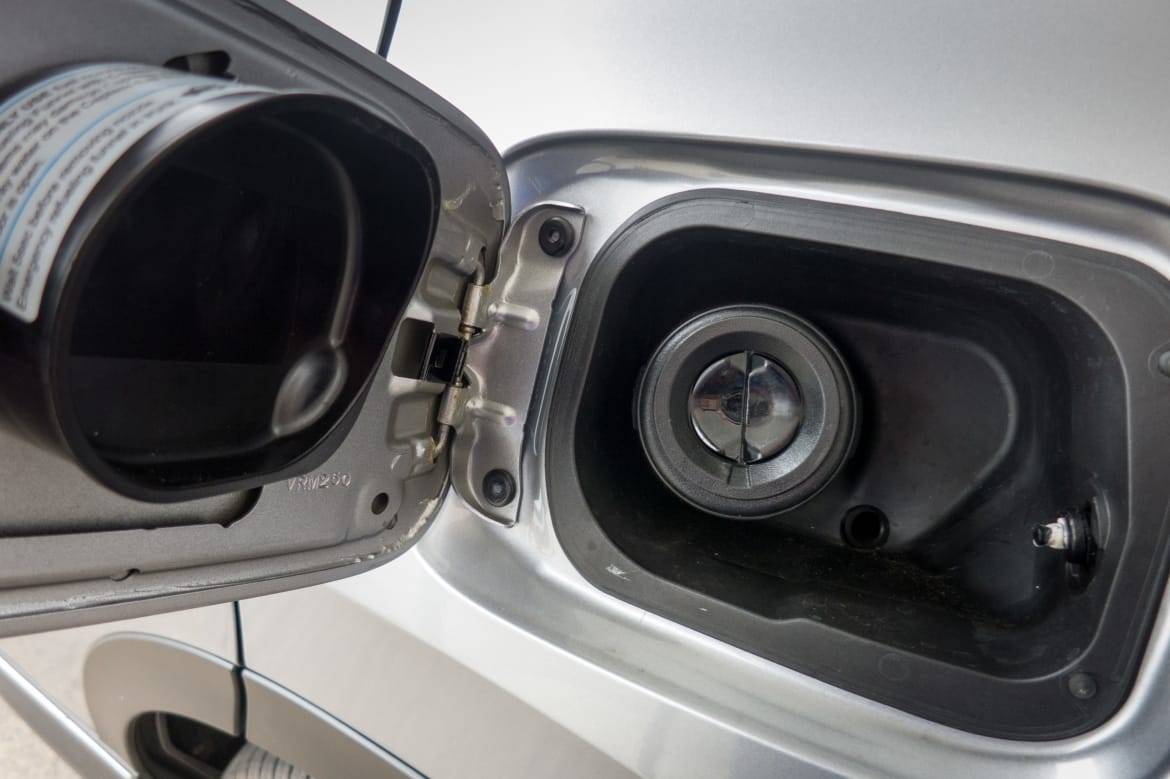 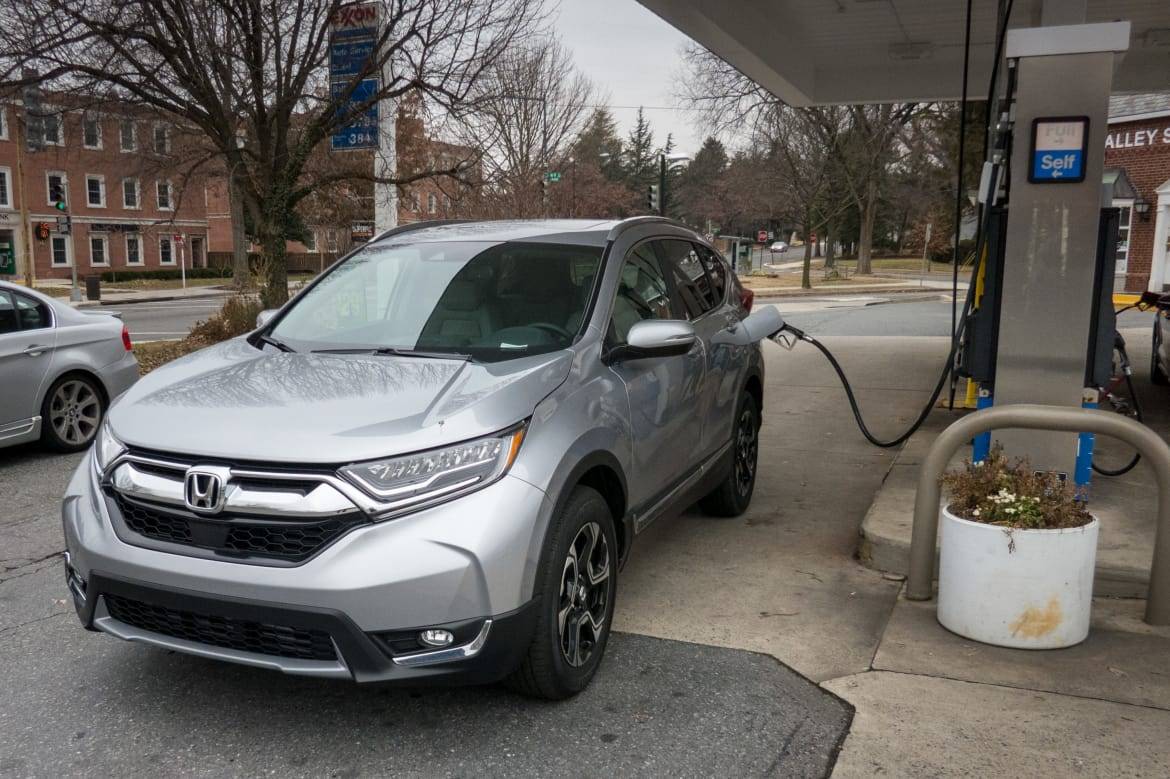 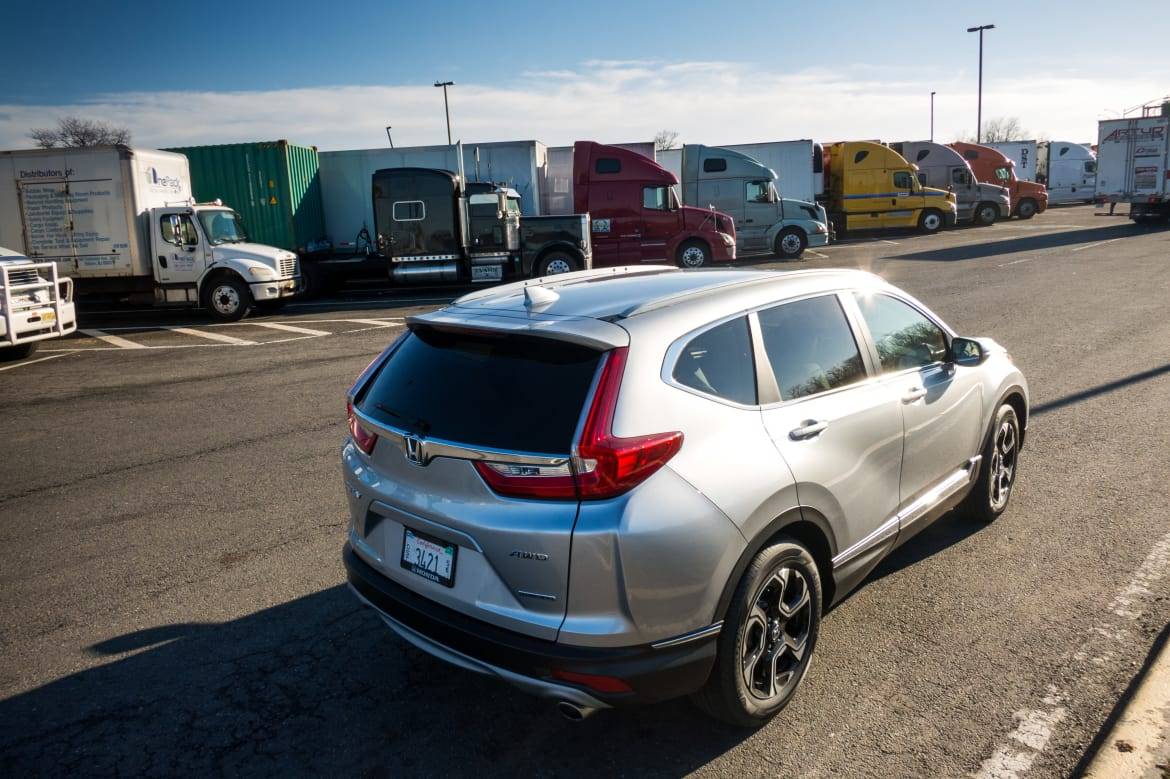 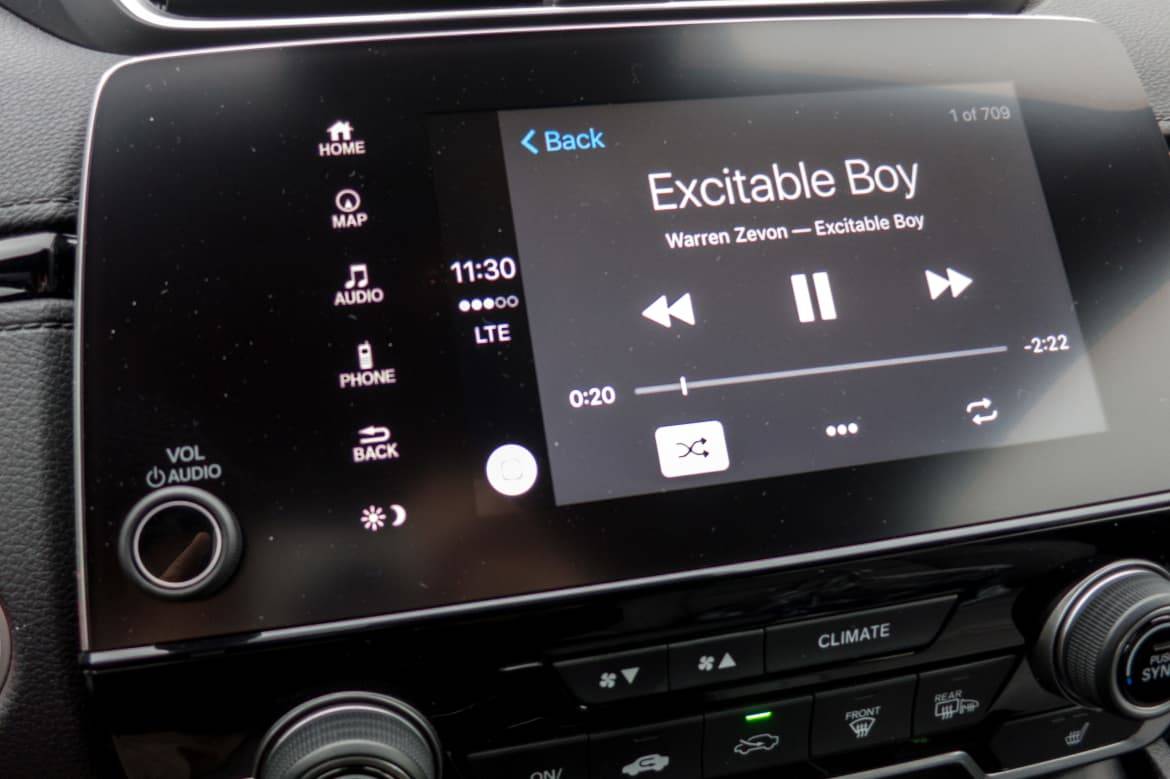