Small SUVs are officially a thing now, as shoppers have proven that they have an affinity for utility vehicles of all sizes great and small. The first versions of small SUVs lacked stature, leading many to lack sufficient passenger room and practicality. Now, however, we’re entering what I would call the second wave of subcompact SUVs. Two new models that went on sale this year are bucking the first wave’s trend: the 2018 Nissan Kicks and 2019 Volvo XC40.

These two SUVs have found a way to go big on utility and value, two areas in which this class has been traditionally challenged. What’s even more interesting is that they come with very different price tags. Keep in mind that we have some trouble calling the Kicks a true SUV given its lack of an all-wheel-drive option. But I think it has enough credentials as a high-riding vehicle to merit inclusion here.

At first glance, there may not seem to be much in common between the Kicks and XC40 because the XC40 at an as-tested $44,315 (including destination charges) costs almost twice as much as the Kicks I tested at $22,810. But after a week with each of them, I found striking philosophical similarities that give the two similar strengths beyond the two-tone paint jobs.

Here are four ways that both the 2018 Nissan Kicks and 2019 Volvo XC40 excel where other small SUVs falter. 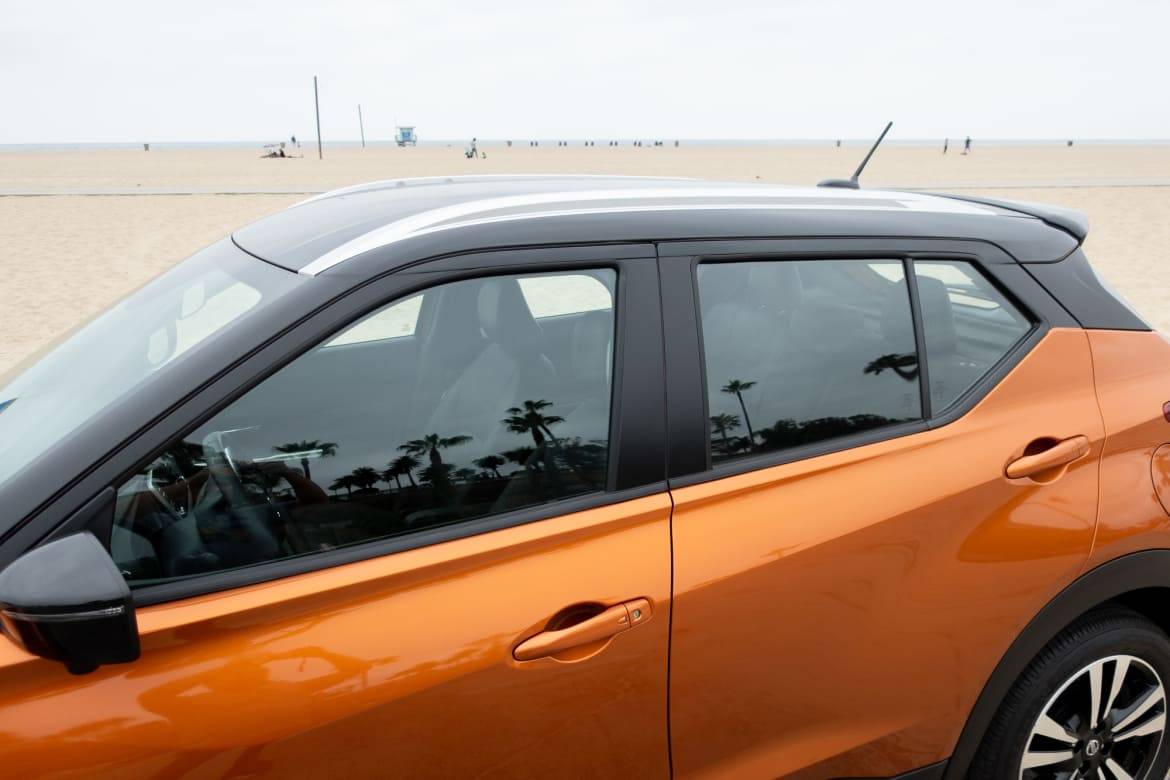 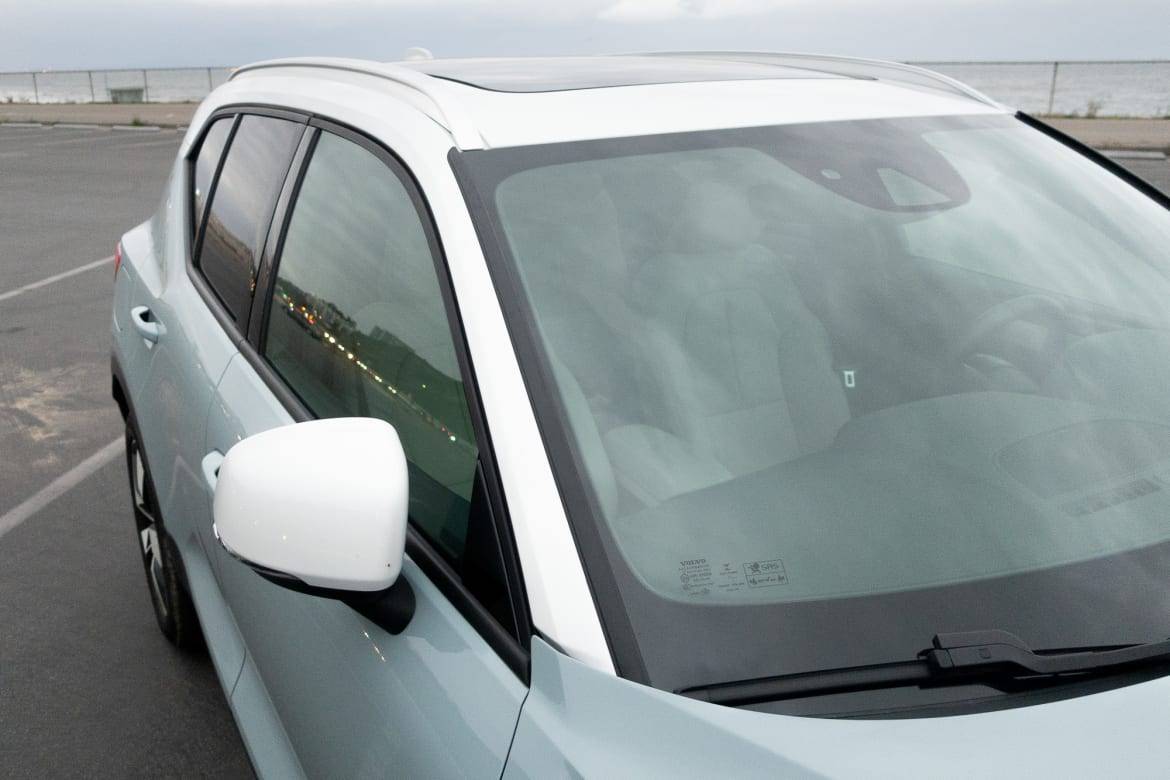 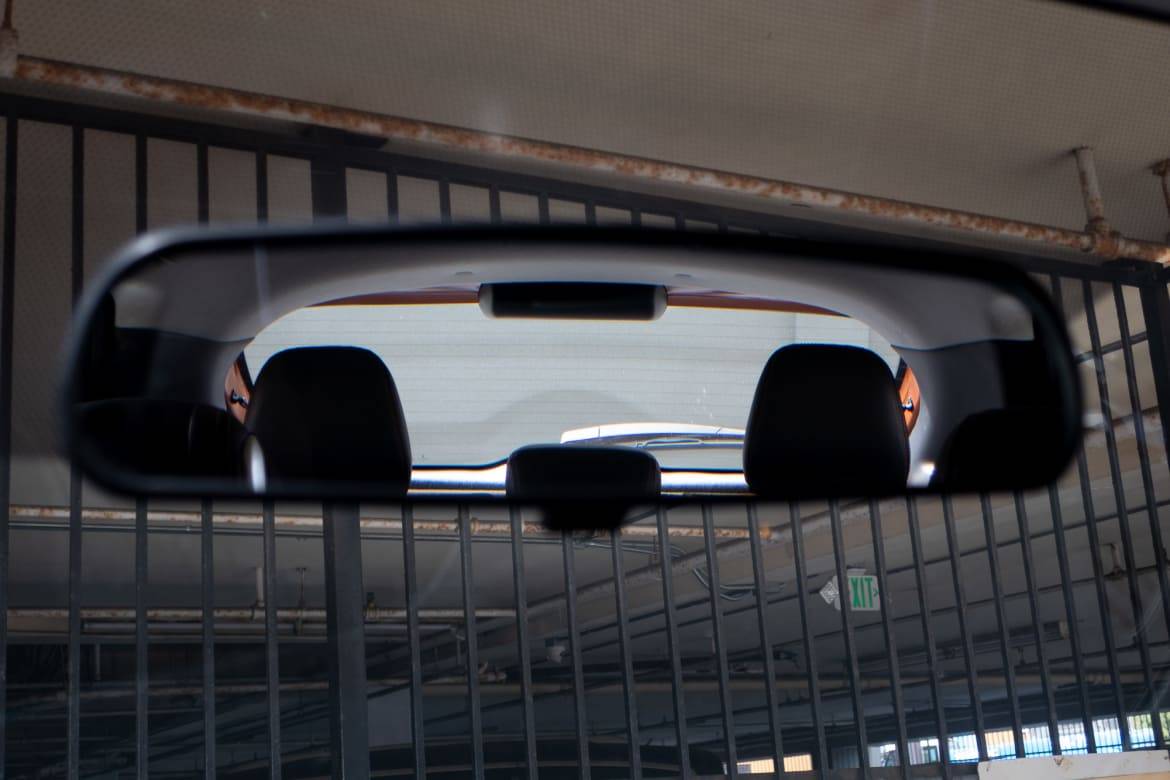 Both the Kicks and XC40 have tall windows that provide good visibility not just for the driver, but for passengers as well. The top of the window sits well above your sight line in both vehicles, which helps the interiors to feel roomier. When the roofline is too low, it can make the vehicle claustrophobia-inducing.

When driving, the large windows give both vehicles good rearward visibility with smaller blind spots than can usually be found in small SUVs and rear glass large enough to fill much of the rearview mirror. The Kicks does have a wider A-pillar, but it didn’t really bother me because the rest of the glass is so expansive. The XC40 ups its open-air quotient even more with a panoramic moonroof. 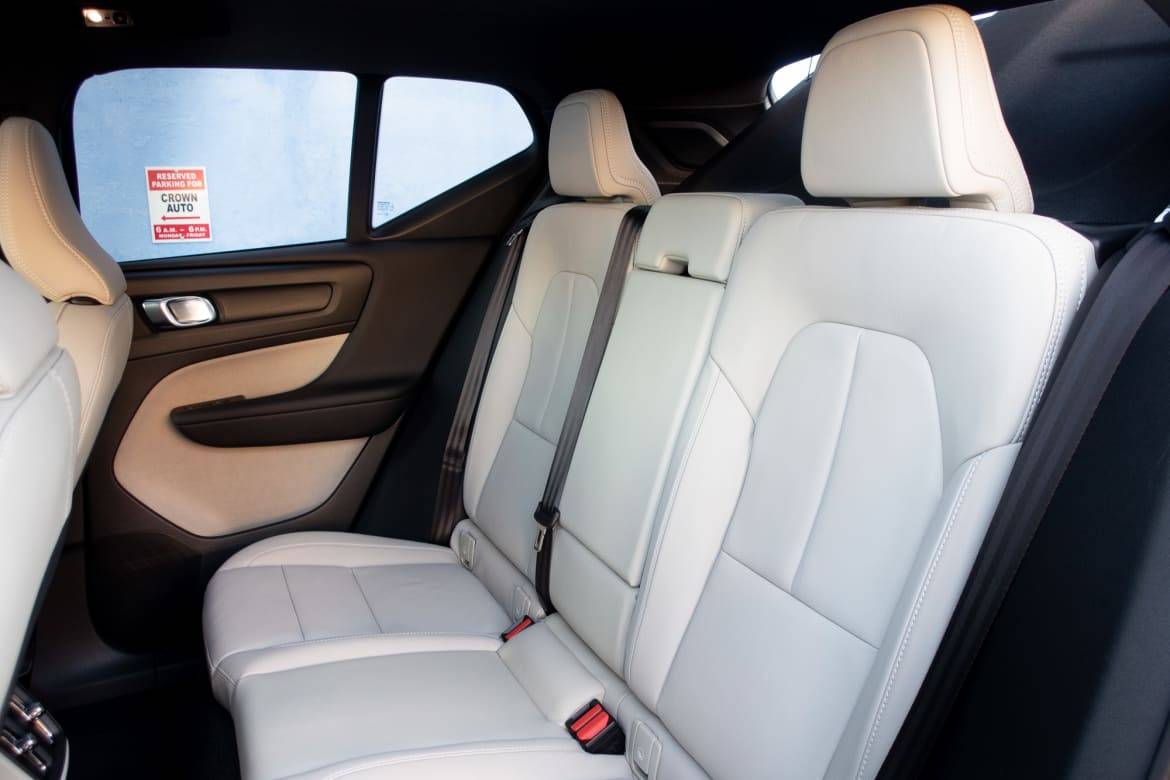 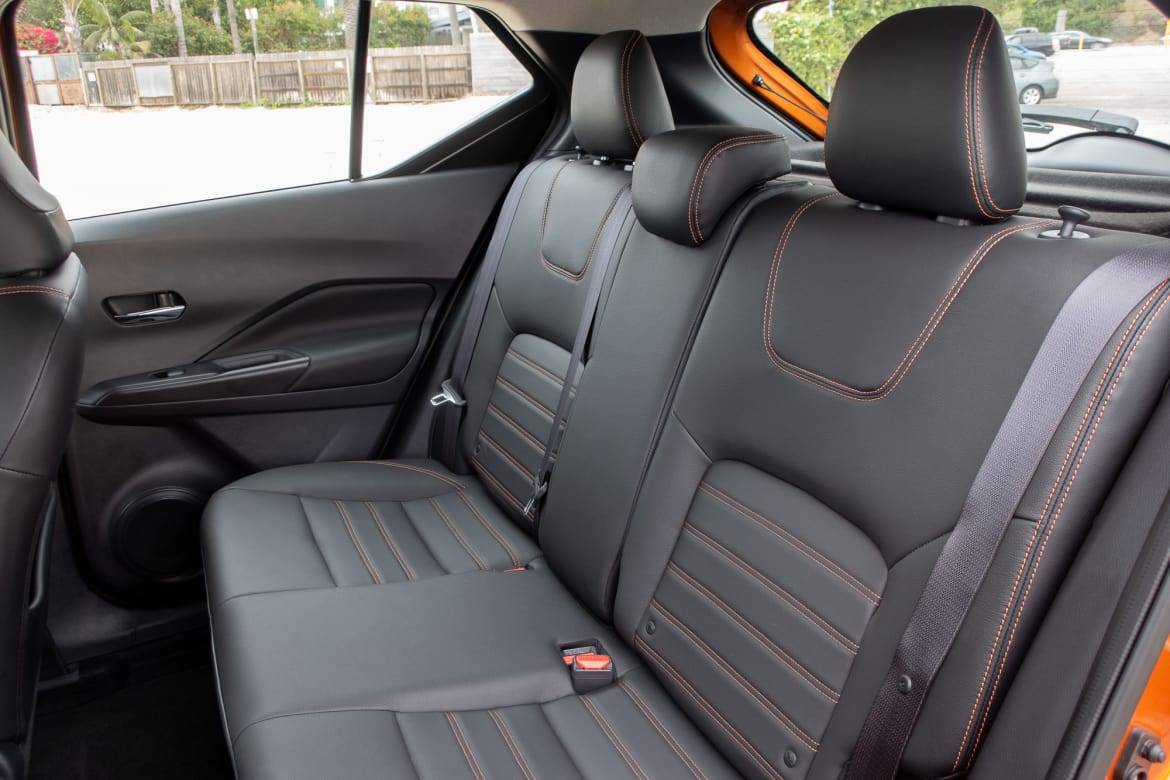 The Kicks and XC40 also offer above-average cabin room for this class – especially headroom. I found the XC40 to have better first- and second-row comfort than some of the competitors in our 2018 Luxury Compact SUV Challenge from June, and those vehicles all cost more and were around 10 inches longer. The XC40 had an impressive amount of headroom across both rows, even with a panoramic moonroof (which isn’t always the case).

Headroom is equally generous in the Kicks. Seated in the driver’s seat, I measured from the top of my head to the headliner and there was nearly a 6-inch gap. The Kicks doesn’t have a ton of legroom, but it can be negotiated if people work together; I’m 5-foot-11, and if I set the seat up where I would drive, my knees come close to the seatback but don’t touch it. 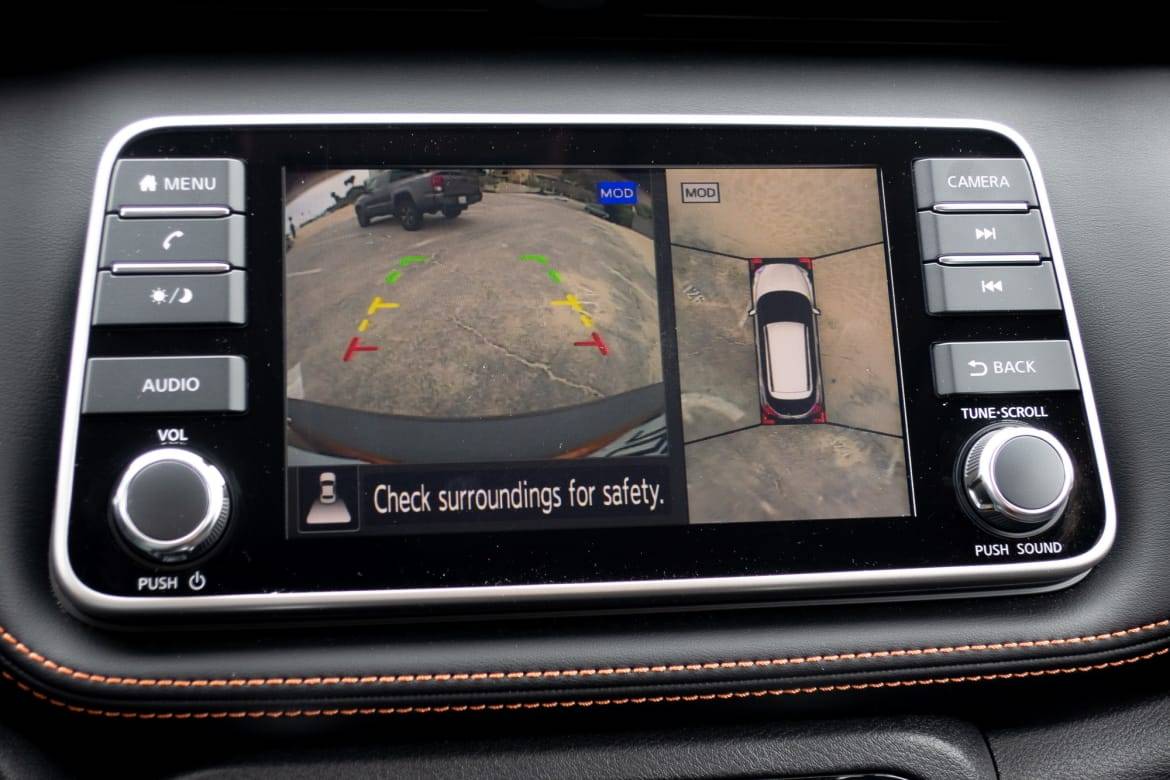 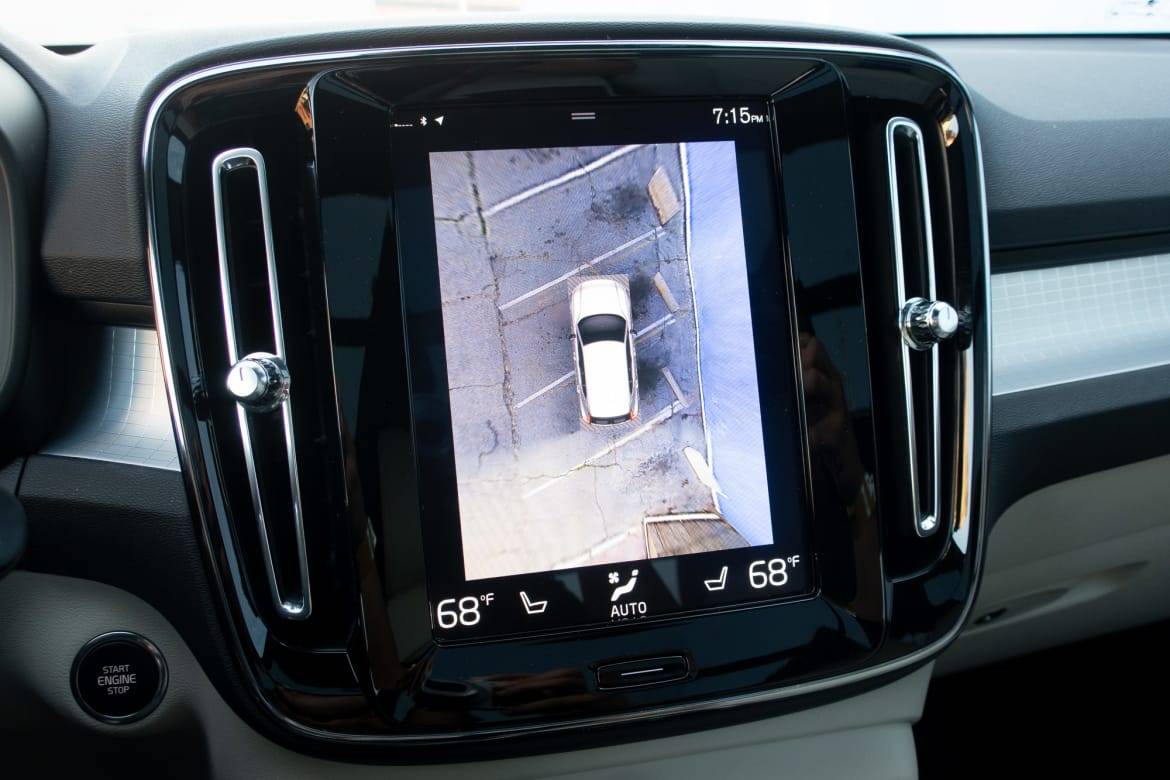 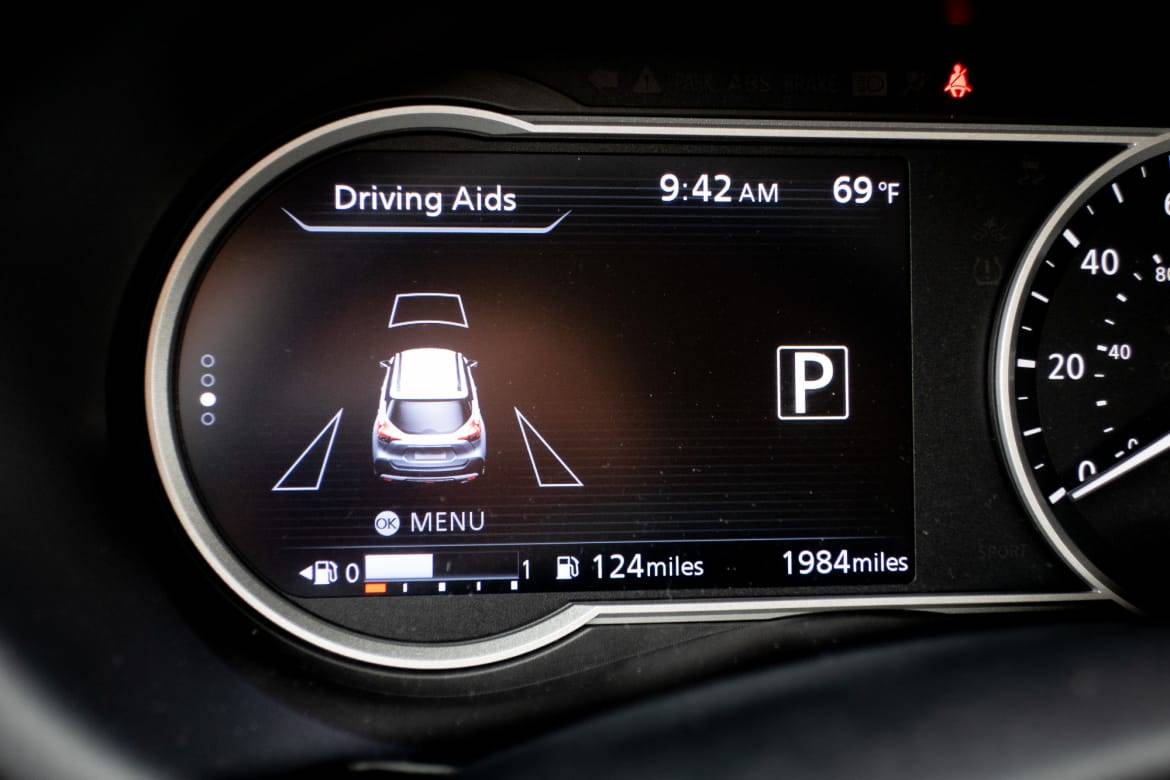 My test XC40 SUV had all of these features. To outfit the new 2018 BMW X2 with the same safety equipment, it costs a minimum $46,795. The 2018 Audi Q3 doesn’t offer many safety features beyond blind spot warnings; it’s missing adaptive cruise control and even automatic forward emergency braking.

The Kicks isn’t as fully equipped. There’s no adaptive cruise control or lane keep assist, and if Nissan’s excellent ProPilot system was offered here it’d be a coup, but the Kicks does have standard forward automatic emergency braking, optional blind spot warning and a 360-degree camera system. It’s worth mentioning that both vehicles are beaten on safety features by their Toyota/Lexus counterparts: The Toyota C-HR and forthcoming Lexus UX both come standard with comprehensive safety packages that include adaptive cruise control, lane keep assist and forward collision warning with automatic emergency braking. 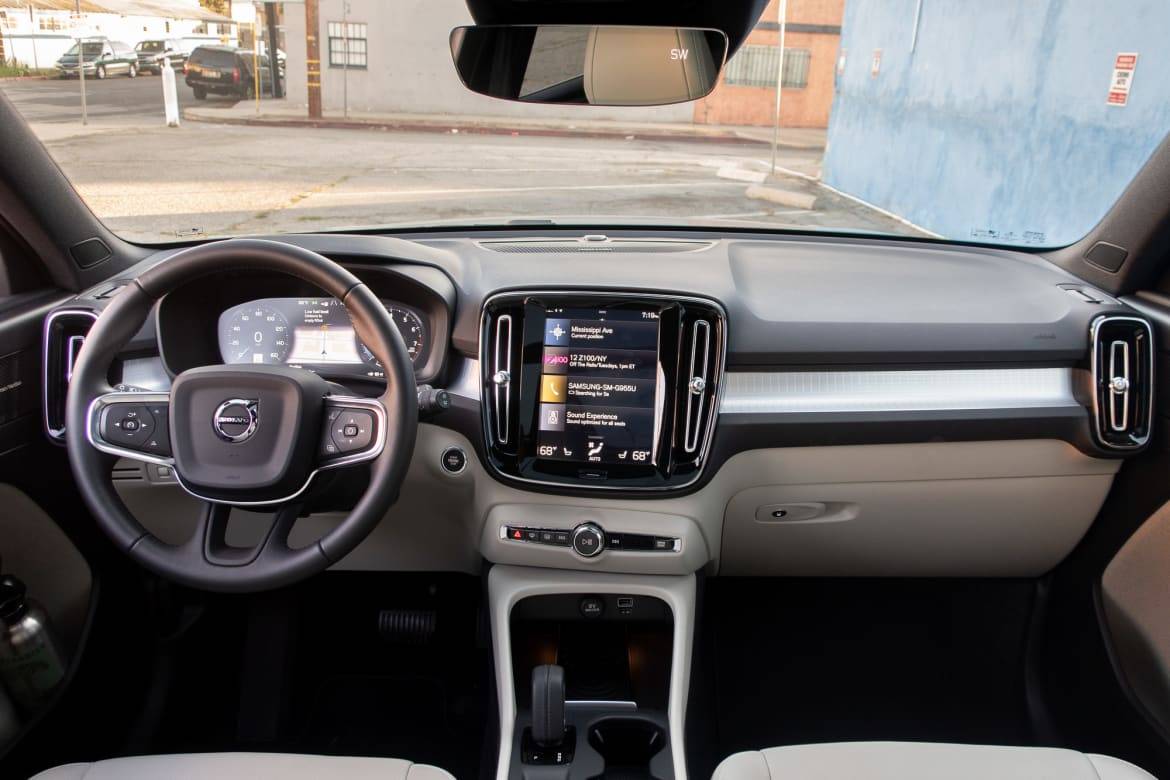 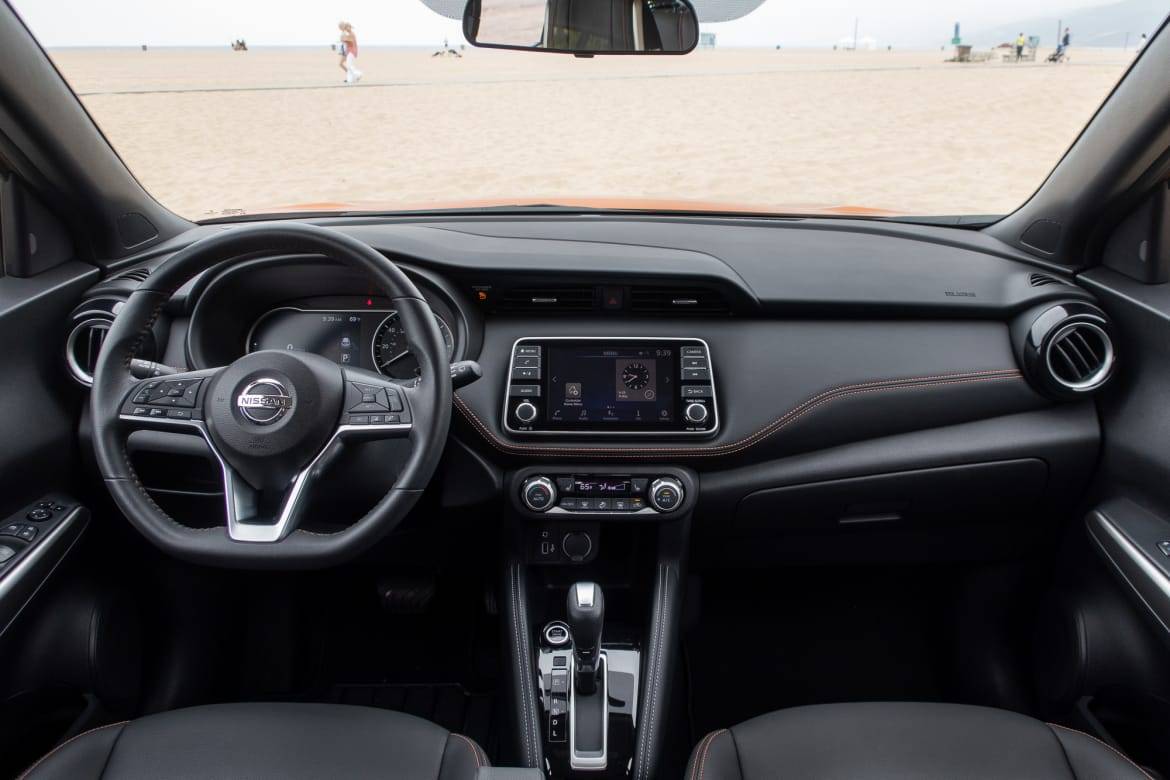 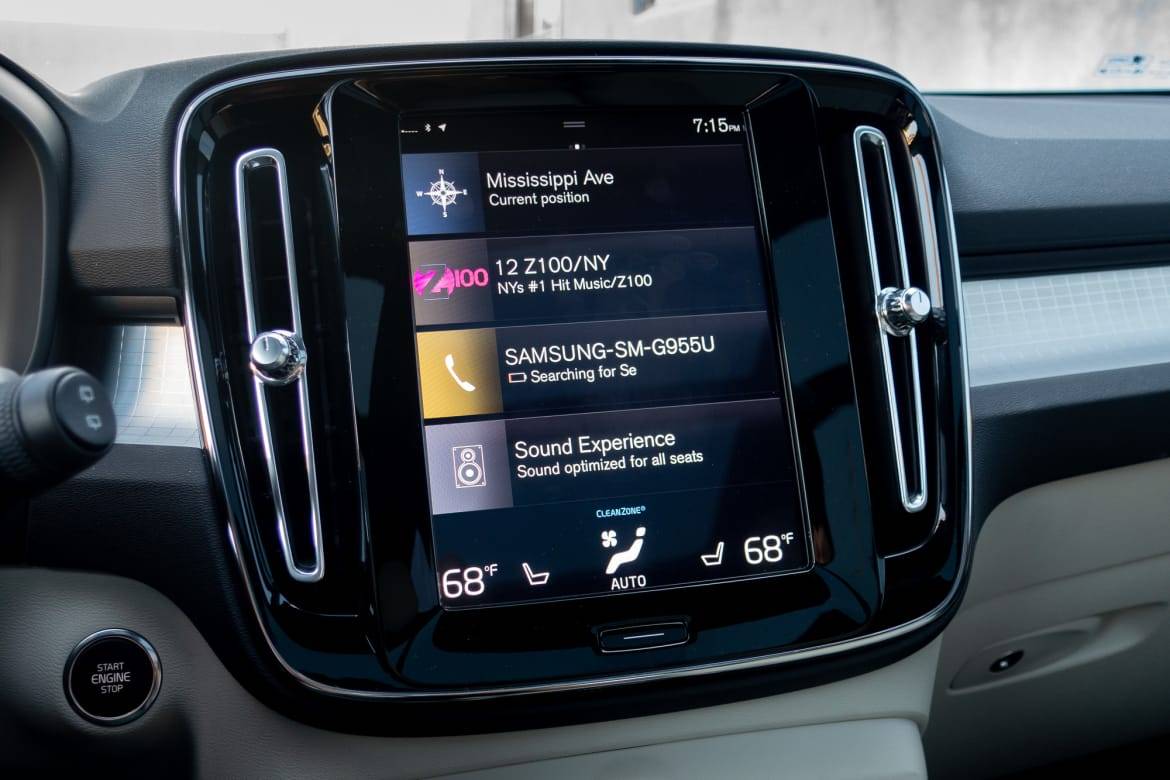 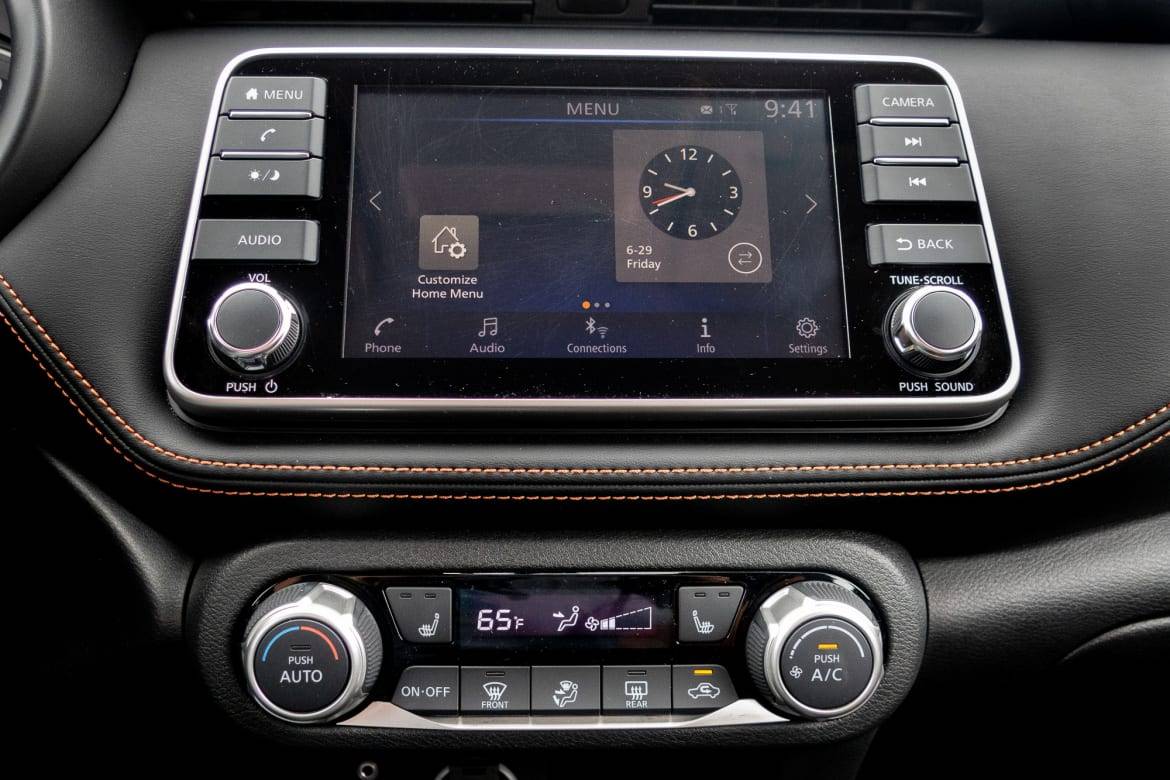 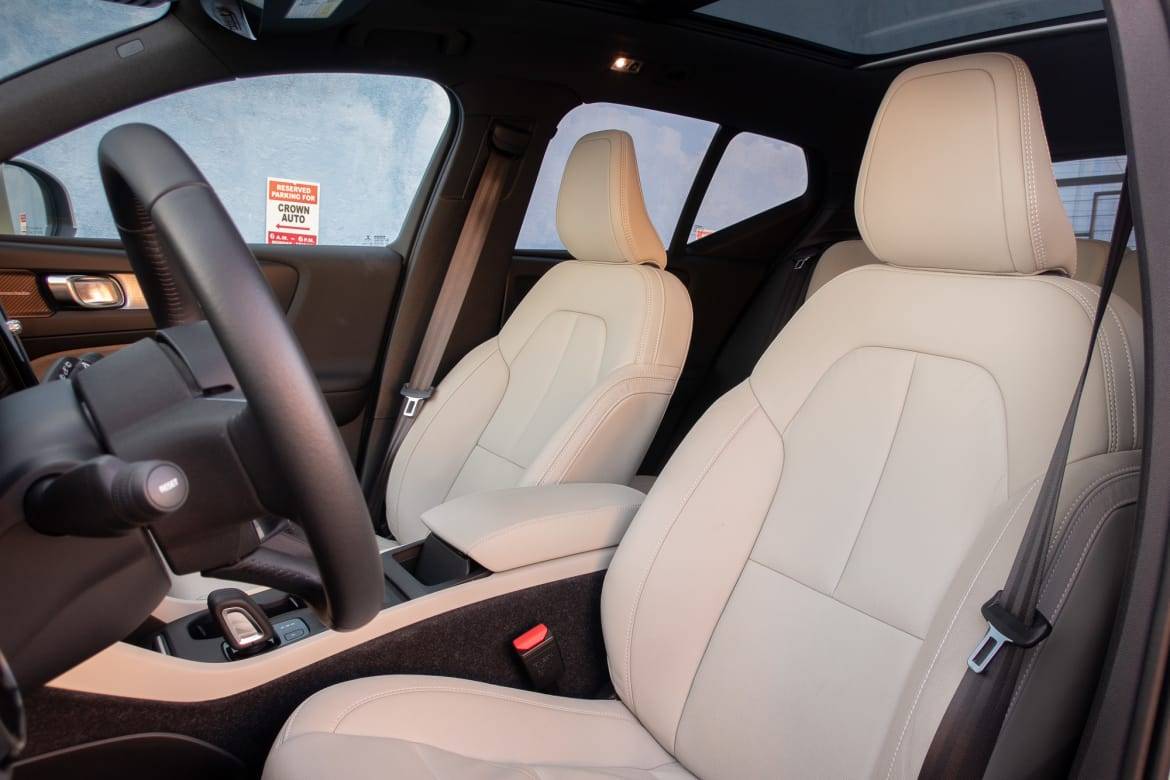 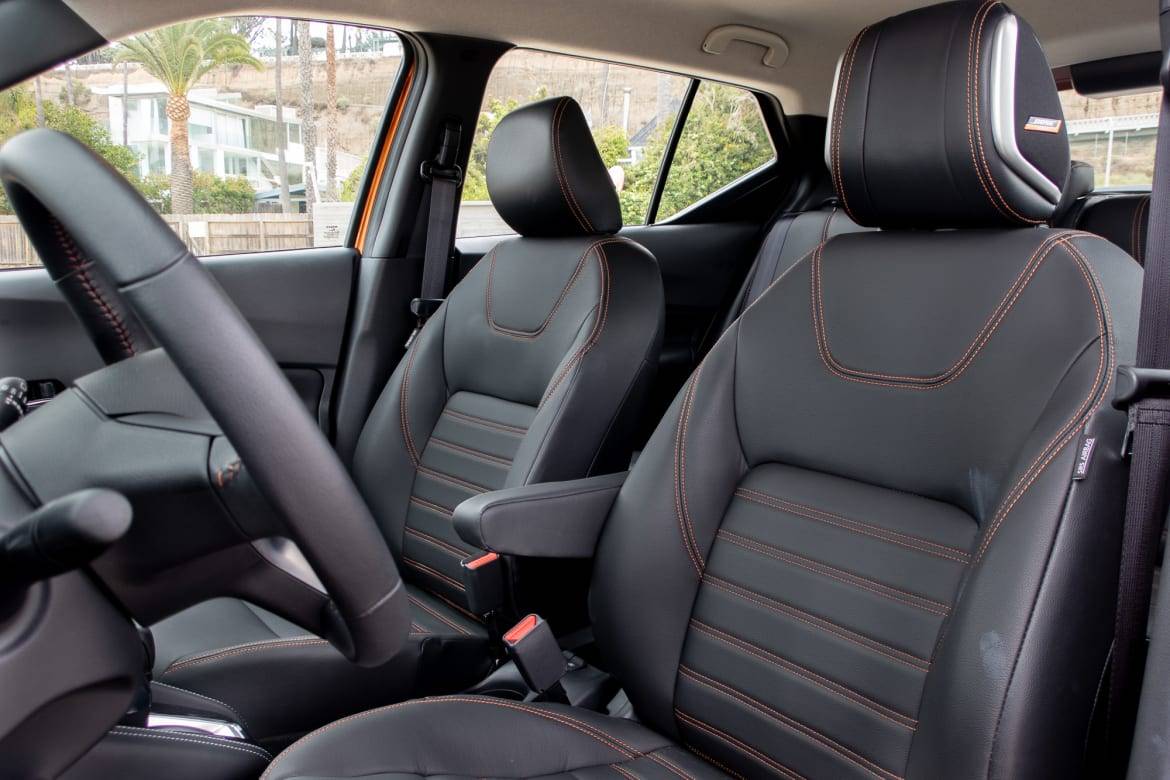 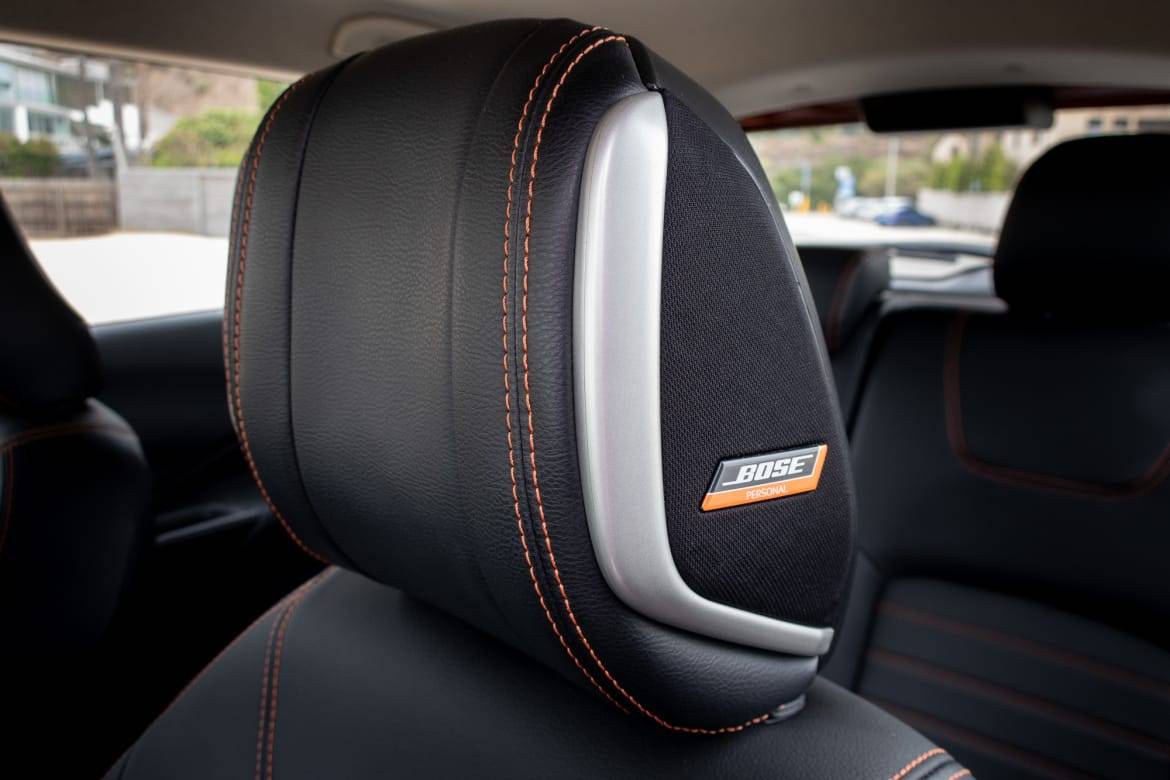 Both vehicles appeal on the value front thanks to the sheer number of features they offer for their price, but also that each interior punches above its weight in quality given the competition.

The XC40 continues the Volvo trend of well-crafted, minimalistic cabins, which started with the XC90 a few years ago. It swaps out some of the open-pore wood, which I’m a fan of, for metallic accents, but the great seats and large, vertically oriented 9-inch touchscreen remain (though it still takes too long to start up).

Compared with the new 2018 BMW X2 I tested earlier this year, the BMW’s interior doesn’t hold up to the Volvo — it didn’t even have real leather upholstery, and the interior was smaller for a higher price ($50,920) even if you take off the X2’s nearly $5,000 in performance upgrades.

The Kicks top-of-the-line SR trim only has a single options package that adds heated front seats, imitation leather seating surfaces and a Bose audio system with speakers integrated into the driver-seat head restraint. It also offers Android Auto and Apple CarPlay (as does the XC40) on the top two trim levels. The imitation leather in the Kicks is excellent; it fooled me for a hot second when I first saw the Kicks at the Los Angeles Auto Show. If there’s one place where the Kicks shows its budget-friendly nature, it’s the lack of an armrest on the front passenger’s seat.

These two-tone brothers from another mother seem to have learned the lessons from the small SUV failures that preceded them, and they come to us fully formed with real-sized interiors and plenty of utility. Both of them drive decently, too. I found the XC40 to have slightly better ride quality and composure than the XC60 that won our latest Luxury Compact SUV Challenge. The Kicks doesn’t have much power (and the fuel-economy-concious drivetrain with then continuously variable automatic transmission is a bit of a wet blanket), but it was surprisingly competent in corners and in its class; driving just “OK” is enough to put it in the upper half of its competitors.

Testing both vehicles has resuscitated my hope in small SUVs (or in the case of the Kicks, sort of SUV). It turns out that it is possible to make one that’s small — and practical — at the same time.