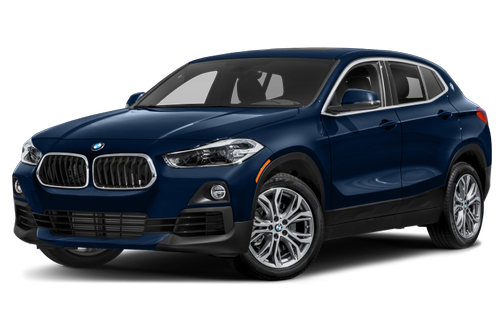 Our 2018 BMW X2 trim comparison will help you decide.

The verdict: BMW has created an SUV version of a driver’s car, but it lacks the interior space to be considered a good SUV.

Versus the competiton: The X2 holds up very well among competitors dynamically, but rivals like the Volvo XC40 beat it handily on value and spaciousness.

The latest product of BMW’s obsession with filling in all of the numbers of its SUV lineup is the 2018 X2. The X2 becomes the sixth SUV, and its seventh, the three-row X7, is just around the corner. But in my time with the X2, I found myself asking the same question over and over again: “Is the X2 really an SUV?”

BMW may not think so, calling the X2 a “sports activity coupe” to differentiate from a “sports activity vehicle,” as it refers to its odd-numbered SUVs. Looking at the X2 is equally confusing, with its sloped roofline and low overall height. This makes it look like a hatchback and an SUV in equal parts once you factor in the aggressive lower body cladding found on each side. I’ll say this for the X2: I think it’s much better looking than its even-numbered counterparts, the X4 and X6.

Like the other even-numbered X vehicles, the X2 is closely associated with an odd-numbered model, in this case the X1. Put the two next to each other and they have plenty in common, from powertrains to nearly identical interior layouts. Beyond its more aggressive roofline, the X2 is also smaller dimensionally despite having the same wheelbase: It’s both shorter in length (3.2 inches) and lower (2.8 inches), which gives it less cargo room (21.6 versus 27.1 cubic feet) and slightly less occupant room. Compare the two vehicles here.

My confusion over the proper categorization of the X2 is probably overwrought, but the questions it raises are legitimate: Can the X2 get the job of an SUV done? Can it be both practical like an SUV and fun to drive like a car as BMW claims?

The X2’s strength lies in its driving experience — specifically its handling. My test vehicle came equipped with the optional M Sport suspension, part of a large M SportX Package that also includes a sport transmission, sport seats and a more aggressive exterior look. The suspension lowers the X2 by 0.4 inch, as does an available adaptive variable suspension, which can change the firmness of the shocks in real time.

Behind the wheel, the X2 feels much more like a car than an SUV — driving it reminded me of BMW’s 3 Series sedan, though it’s not quite as nimble as the 2 Series coupe with which it shares a number. For those who like a heavier steering feel (as I do), the X2 has it when compared with vehicles from Audi or Lexus.

The X2’s composure holds up, even on a track. I was expecting more body roll and unease from the suspension when taking corners at speed, but it’s a surprisingly neutral car that handled sweeping high-speed turns and sharper corners alike with gusto. It’s a legitimately fun vehicle to drive if you can get it out on a decent road.

If there’s one slight weakness to the driving experience, it’s the powertrain. Under the hood is a familiar engine that’s used up and down the BMW lineup, a 228-horsepower, turbocharged 2.0-liter four-cylinder that makes 258 pounds-feet of torque. There is only one available transmission (an eight-speed automatic), and the X2 is available in both front- (sDrive28i) and all-wheel drive (xDrive28i) versions. Those who want AWD will have to fork over an extra $2,000 for the privilege. EPA fuel-economy figures are rated at 23/32/26 mpg city/highway/combined for FWD models and AWD models slightly behind at 21/31/25 mpg.

This engine is a staple in the BMW lineup, and I’ve found that it often feels underrated in other cars I’ve tested — but not so in the X2. Acceleration takes an extra beat to really pick up. Tossing the X2 into Sport mode helps temper that, but Sport mode makes the throttle a bit too twitchy for most occasions and day-to-day driving. It’s not that the powertrain is bad; it has more than adequate power for merging and passing. But what happens is that the rest of the X2’s driving experience was so proficient, I spent much of the time imagining the things I could do with 50 more horsepower and get wistful. An xDrive35i or xDrive40i version of the X2 would be a welcome addition.

The X2 doesn’t break any new ground for BMW with its interior, as I mentioned. BMW’s iDrive multimedia system has improved incrementally throughout its lifetime, so it now is an easily usable (and, perhaps more importantly, customizable) system. The ability to change the main screen to fit the functions that you use most often is a big plus.

It’s also a big plus that the X2 comes as a 2018 model and not a 2019, which means that if you want Apple CarPlay, it’s offered as a one-time $300 option rather than the subscription-based service that BMW is starting with its 2019 models. In the latter case, it would cost $80 to use per year after the first year for free.

The X2’s standard upholstery is imitation leather that isn’t on the par of Lexus, but it feels premium enough to not be out of place in a luxury vehicle. If you want the real thing, it’s available but as an option for $1,450.

The X2, much like the X1, does come with enough space for two adults to fit in the backseat, but the fit would get cramped with a third person in the middle. Legroom is what I would call adequate, but it can be negotiated with front occupants assuming relations are good. The backseat headroom is more generous than the legroom, though the shorter roofline and the cut of the windows puts the opening a bit below the line of sight for taller passengers and makes it feel more cramped than it actually is. The available panoramic moonroof helps with this; the cabin feels quite open and the glass reaches back for enough to easily be seen by backseat occupants.

You Can Hit What You Can’t See

Visibility is a weakness for the X2, starting with that thin rear glass that pinches down smaller than the rearview mirror’s field of view.

That wide C-pillar, which has a prominent BMW logo on both sides of the car in homage to BMW coupes of old, combines with the upward sloping beltline below the windows to create large blind spots. I get the feeling that BMW stuck those extra logos on the C-pillars to hide their size when seen from the outside, but from inside the car, they just seem intrusive. Luckily, the window doesn’t kink up so much that it cuts into visibility for backseat passengers too much, but the X2 doesn’t have an expansive field of vision like the 2019 Volvo XC40 has.

It’s worth mentioning that the X2 is not alone in this class for having visibility woes. Two direct competitors, the Mercedes-Benz GLA-Class and Infiniti QX30, also suffer greatly from this problem, and both of those models also have smaller backseats that increase their claustrophobia quotients beyond that of the X2, which has decent room for its footprint.

The X2 drives well enough to be of some intrigue, but I think that what leads me to struggle the most with it is its value proposition. My test vehicle was pretty well-equipped, with heated front seats, front and rear parking sensors, a wireless charging pad, 19-inch alloy wheels and a Harman Kardon sound system. But that came at a cost, bumping the X2’s base price for AWD versions from $39,395 all the way up to $50,920. Most of that comes from the addition of the M SportX Package I mentioned above, which adds $4,650 to the price tag all by itself.

To put this price in some further perspective, our price range for the 2018 Luxury Compact SUV Challenge was $50,000, plus or minus $3,000. The X2 sits right among those vehicles, but it’s a class smaller with less room and utility. If those are a priority for you, it’s hard to make a case for the X2 when you can spend just as much and get more passenger and cargo room.

The X2 also feels light on features for that price, especially in the safety department. It did come with the $700 Driving Assistance Package that comes with lane departure warning, automatic forward emergency braking, speed limit information and automatic high beams. But if you also want adaptive cruise control? That’s another $1,000. Parking sensors — important since the X2 is hard to see out of and doesn’t offer a 360-degree camera system — will set you back another $800. And if you want blind spot warnings? Lane keep assist? Tough. Not on this car.

The X2 also gets undercut by much of its competition — including the X1, which starts at $2,500 less and offers more passenger and cargo room. A look at the competitive set is also illuminating. Take for example the new Volvo XC40: I tested one just last month that had a much lower price ($44,315) and was better equipped, including all of the safety features I mentioned above (even the ones the X2 doesn’t offer) and excellent passenger room. It also has really good visibility. Compare the X2 with the XC40 and aforementioned Mercedes-Benz GLA and Infiniti QX30 and you’ll also see a stark difference in their starting prices.

Ultimately, the X2 ends up being a tweener vehicle. It’s not quite practical enough to compete with the SUVs and not quite sporty enough to compete with the sports cars. But if what you’re looking for is a compromise between fun and utility, then the X2 has some merit — it’s not a bad thing to look for some fun with a dose of added practicality. There aren’t many vehicles in this class that can hold up on a track, and I’ll be the first in line to get a crack at an M version of the car when it comes rolling through.

I wanted a small suv which can be used as a daily commute and had good handling and performance when needed. It has been a good ride so far. Very functional and easy to use commands.

This car met all my needs and expectations. Love the styling and performance. It is a joy to drive. The buying experience was great from West Herr BMW.

The car is nimble and fun to drive. Great steering, braking and acceleration. Car grips the road and is feels very safe. The side BMW badges make the car easy to recognize and stand out among the sea of small SUV's.

All model years for the BMW X2