When Chevrolet first announced that it was going to be bringing back the Blazer name and slapping it on an SUV, four-wheel-drive enthusiasts around the country were thrilled. It was thought that maybe Chevy was going to get back into the true off-road SUV game thanks to the perennial popularity of the Jeep Wrangler and the mad interest in the still-unseen, upcoming 2020 Ford Bronco. Then we saw what the brand had in mind for the 2019 Chevrolet Blazer when it was unveiled at a private event in the summer of 2018: It wasn’t a rugged off-roader at all, but rather a stylish two-row, five-seat crossover SUV meant to challenge the Ford Edge, Hyundai Santa Fe and Nissan Murano.

Admittedly, the move makes sense. Mid-size SUVs like the Blazer are the second-hottest-growing segment in the market (behind compact SUVs like Chevrolet’s own Equinox), so having an entry here and bringing the crossover count in the Chevy showroom up to four (Blazer, Equinox, Trax and Traverse) couldn’t hurt. But does the market need another crossover-style SUV? Is the Blazer good enough to carve off buyers from its already-popular competitors? I recently had a first drive of the new Blazer in the sun-kissed hills surrounding San Diego to find out. (Per our ethics policy, Cars.com pays for its own lodging and transportation at such automaker-sponsored events.) 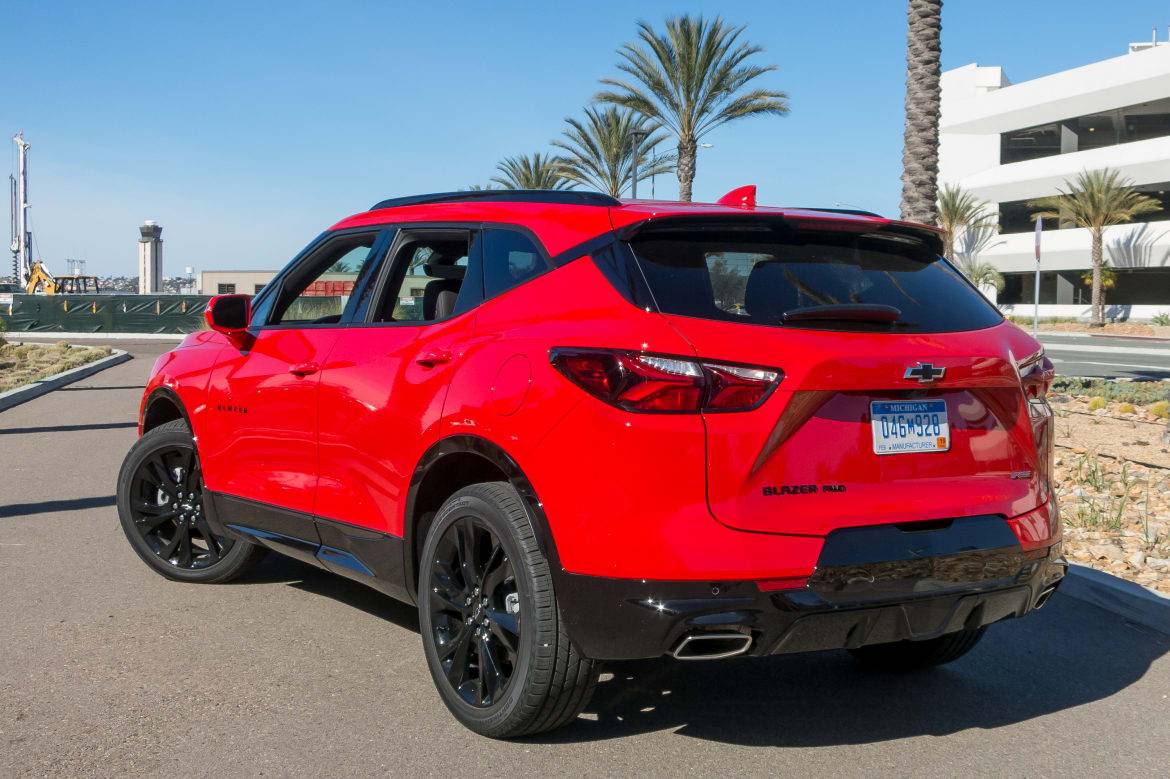 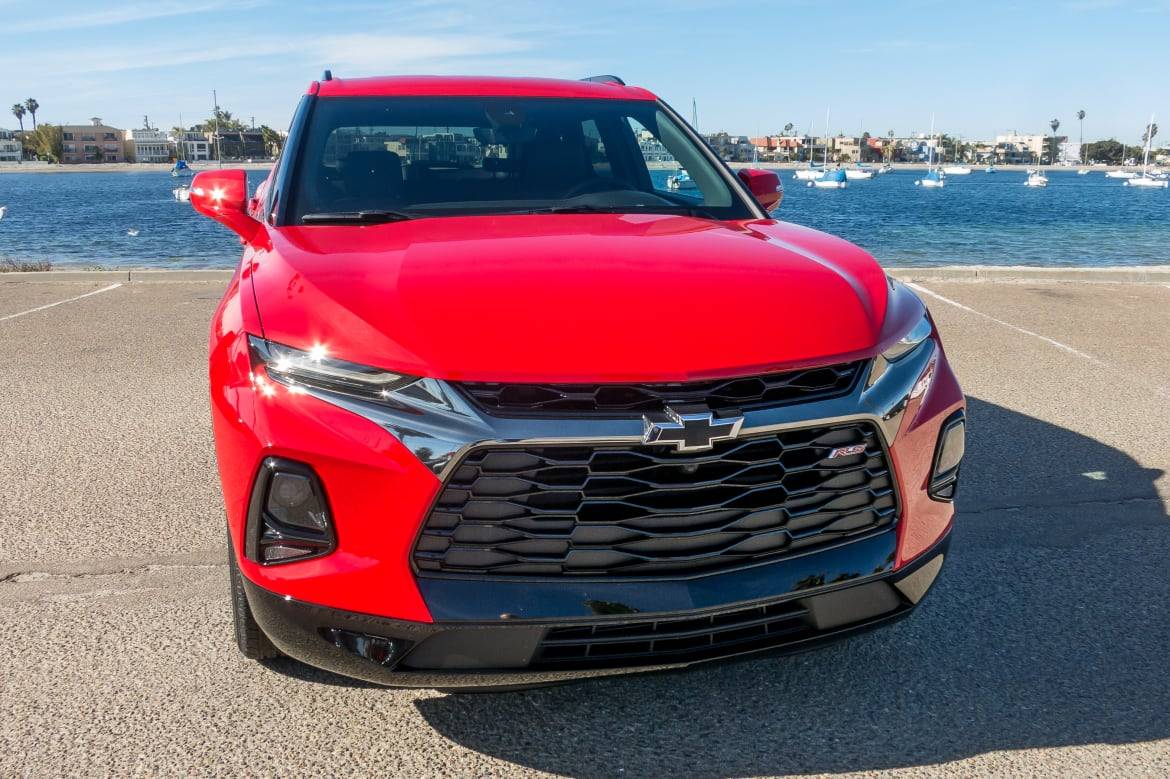 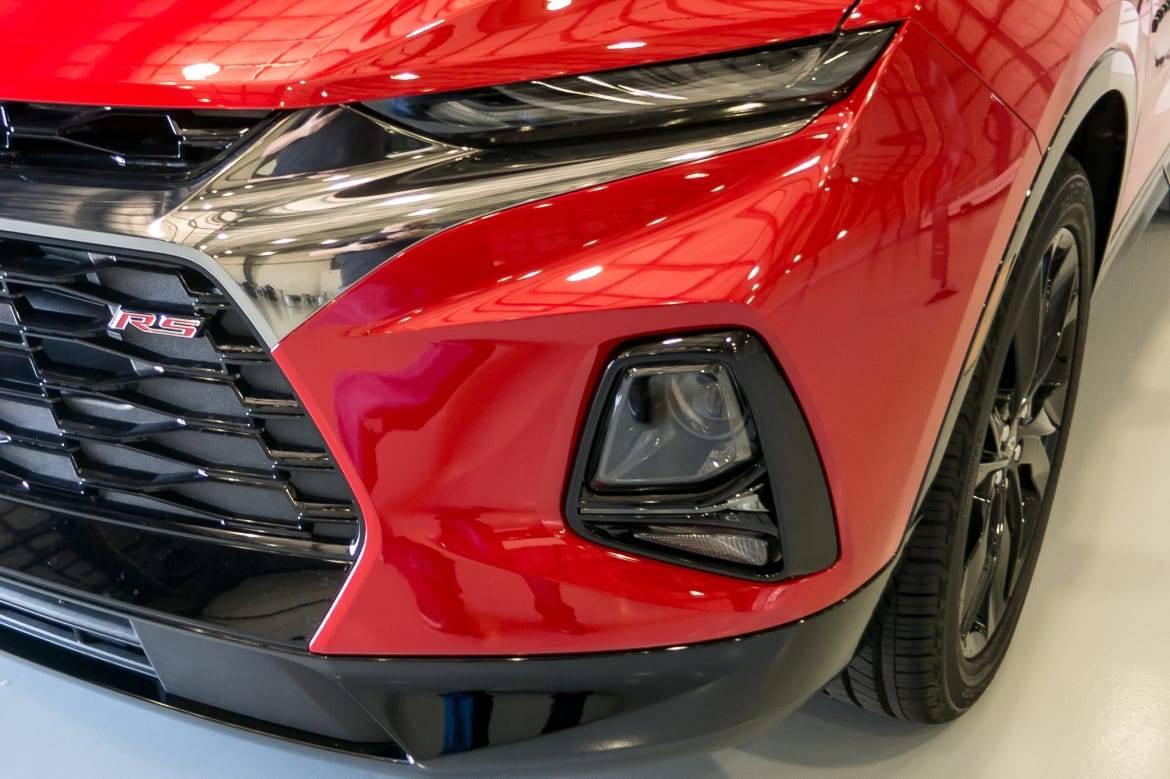 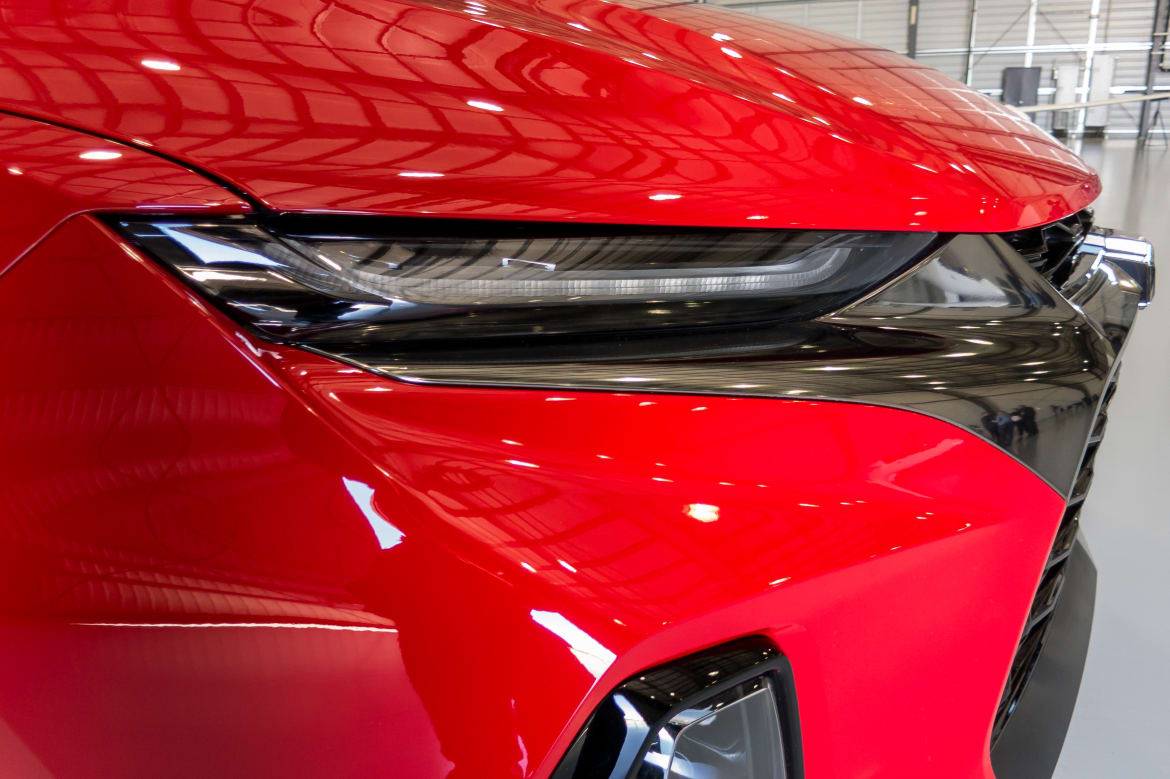 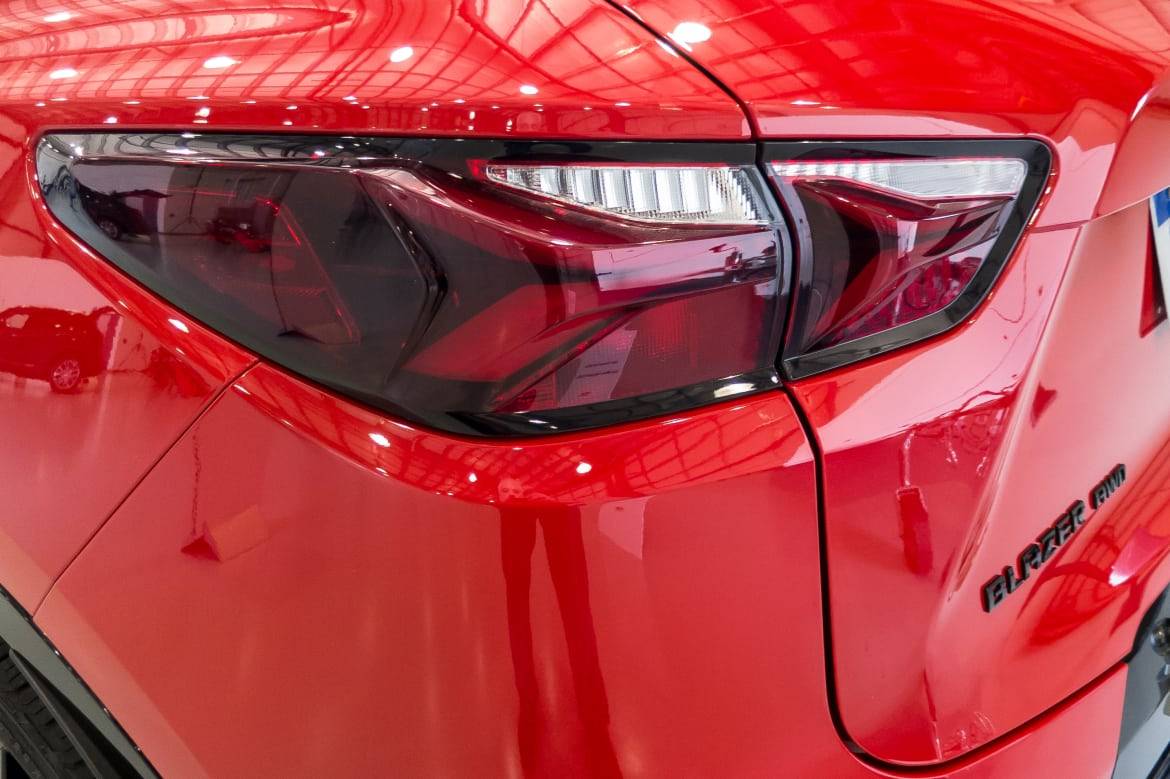 The surprise of the Blazer is how much more substantial it feels than the Equinox. It’s a more sophisticated chassis, using a McPherson strut front suspension and a five-link rear, and it sits on the same chassis as the GMC Acadia, Cadillac XT5 and XT6. It’s wider than the Equinox and almost as wide as the much larger Traverse, which lends the Blazer a sense of stability and heft over all types of road surfaces. Engineers did some amazing work isolating the Blazer from road imperfections, even with the optional 21-inch wheels. The steering has weight to it and the body control is excellent, with very little wallowing in corners or undue motions that can translate into unpleasant ride experiences. This surprisingly substantial-feeling SUV’s road manners are easily a match for the Ford Edge or Nissan Murano.

Two powertrains are offered, and I sampled both. The standard set-up is a 2.5-liter four-cylinder Ecotec engine making 193 horsepower and 188 pounds-feet of torque, mated to a nine-speed automatic transmission driving the front wheels; all-wheel drive is not an option with the four-cylinder engine. The four-cylinder is a perfectly fine powertrain choice, with its lighter weight and lack of AWD equipment creating a sprightly, nimble feel. Acceleration is brisk even when getting on the highway, but it might be another story when loaded up with people and stuff: At roughly 3,800 pounds, the four-cylinder Blazer has a roughly 400-pound weight advantage over the V-6 model according to Chevrolet engineers, and that manifests in its handling and ride.

The other powertrain is GM’s ubiquitous 3.6-liter “Generation II High Feature” V-6, making 308 hp and 270 pounds-feet of torque, also mated to the nine-speed automatic. You can have it in regular, Premier or RS flavors. Chevrolet is taking a page out of Cadillac’s playbook and offering the top versions of the Blazer in two themes — luxury for the Premier trim or sport for the RS. All-wheel drive is optional on the Blazer V-6, and a more sophisticated twin-clutch AWD system can be had on the Premier and RS.

Don’t miss out on the latest news, reviews and videos from our in-house experts. Get updates in your inbox.
2019 Chevrolet Blazer | Cars.com photos by Aaron Bragman

The V-6 model is decidedly heavier, but it doesn’t feel poky or slow — merely more substantial and solid. Acceleration is quick, but it doesn’t have the snappy torque curve of some rivals’ turbocharged four-cylinder engines. What it does enable is a 4,500-pound maximum towing capacity when properly equipped. The Premier trim feels just as solid and substantial as the base four-cylinder Blazer, with the added benefit of some extra grunt when you plant your right foot, accompanied by a muted growl. Fuel economy does take a bit of a hit when you upgrade the engine, however — the Blazer is EPA-rated at 22/27/24 mpg city/highway/combined for the four-cylinder model, dropping to 20/26/22 mpg for the FWD V-6 or 19/25/21 mpg for the AWD V-6.

There are a few different drive modes to select from, including the ability to disconnect the AWD system for slightly better fuel economy. There’s a Sport mode that changes a few parameters, including AWD torque distribution, but surprisingly not throttle response or shift patterns for the transmission. Off-Road mode will adjust throttle response, but given the lack of significant ground clearance or underbody protection, I wouldn’t recommend taking a Blazer anywhere other than a dirt road. Finally, a Tow/Haul mode holds onto lower gears longer for better response while hauling a trailer.

Related: Blazer Is Back! Chevrolet Rekindles Mid-’90s Flame With 2019 Blazer

While the Premier version amps up the luxury quotient, the RS is the more dramatic of the Blazers. It’s more than just an appearance package as we’ve seen on previous Chevrolets — it’s more like the Traverse’s RS package in terms of the visual and parts changes. While it doesn’t get a unique engine like the Traverse RS has, it does receive some significant suspension and steering changes to alter its demeanor. The front struts get 40 percent more compression control, while the rear shocks improve by 15 percent. The steering ratio is quicker, a 15-1 ratio instead of the other Blazers’ 16-1 ratio. The twin-clutch AWD allows the torque to be transferred side-to-side in addition to front-to-back, and 21-inch wheels are an option, as well.

All of this together brings a more sporting character to the RS despite not having any more power to play with. The body control remains impressive, but the quicker-ratio steering is barely noticeable. The changes don’t really make the RS all that sporty, and it certainly can’t hold a candle to the performance delivered by a Ford Edge ST that has more than 100 pounds-feet of torque superiority from a twin-turbocharged engine. This makes the RS the choice if you just want the styling flash that comes with the model, the almost European-feeling ride and handling combination being mostly a bonus. Otherwise, the Premier is a perfectly acceptable (if more expensive) option.

Regardless of which Blazer trim level you get, the interior shows direct influence from the Camaro sports coupe — and it’s a successful integration. The dash design is appealingly sporty, and anyone familiar with the Camaro’s layout will find a lot to like in here, from the placement of the multimedia screen to the round vent rings that also control temperature settings. The buttons are artfully located, everything is easy to use, and we applaud Chevrolet for not removing the height-adjustable shoulder belts in the Blazer as the brand has done with just about every other new Chevy that’s come down the pike recently.

There’s a surprising amount of room inside the Blazer, plenty for four occupants (five might be a bit of a pinch due to the narrow-feeling backseat bench). The second row slides forward and back, maximizing either legroom or cargo room, the latter of which is already surprisingly copious. The rear seats fold flat using remote latches in the cargo area. 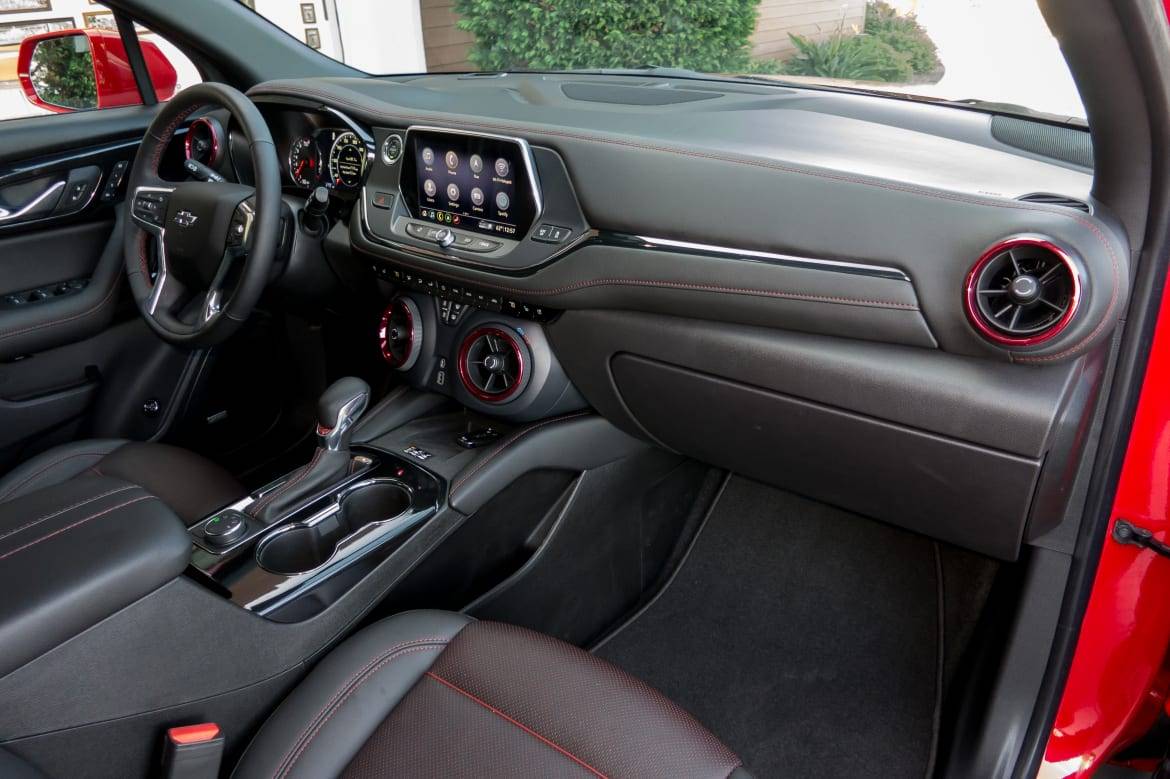 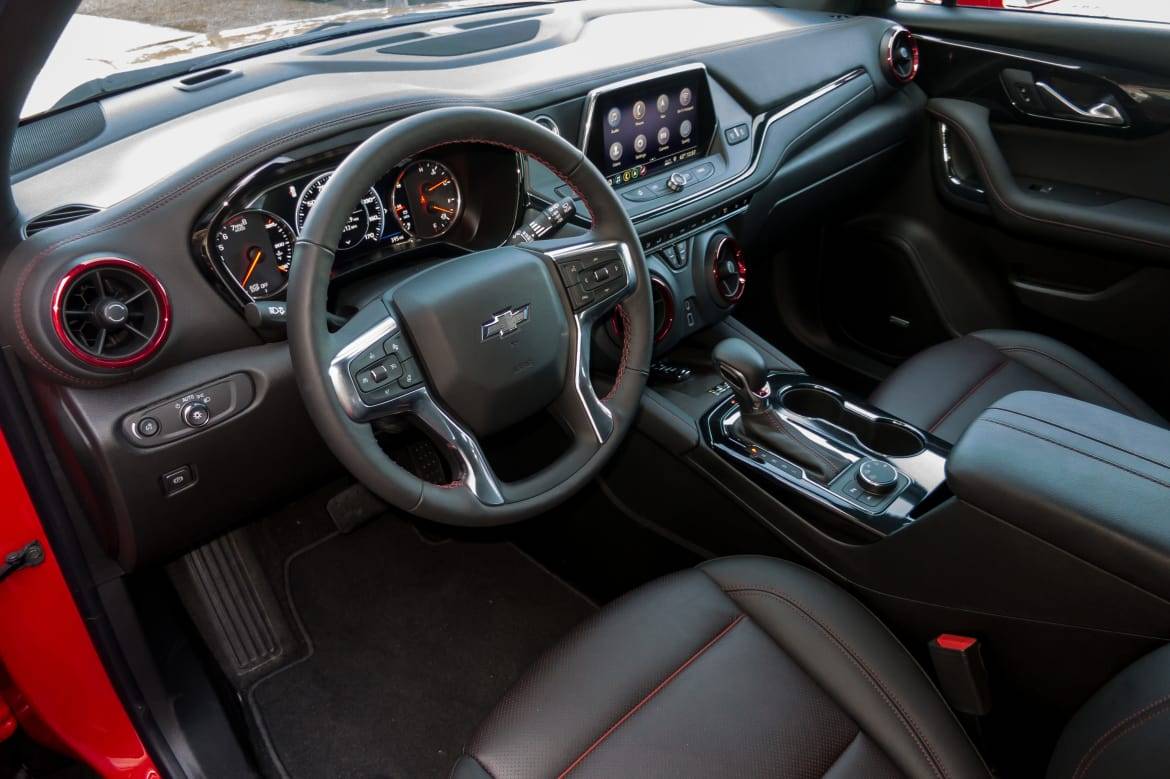 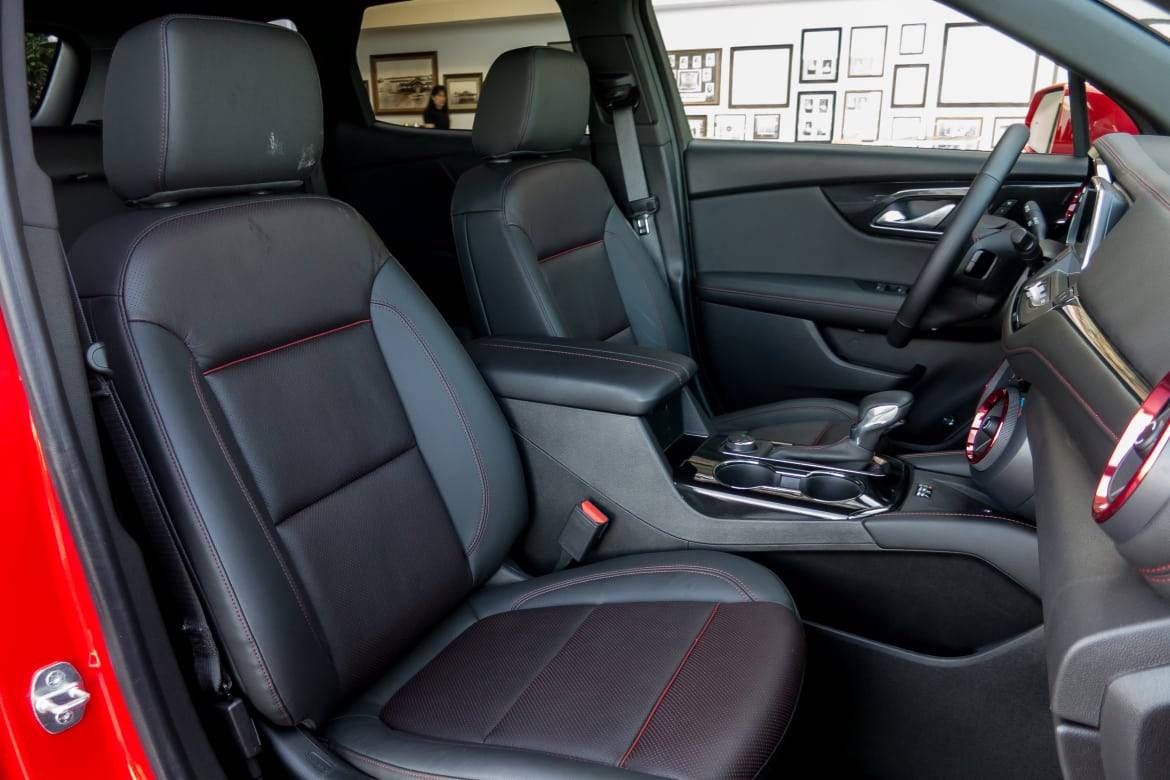 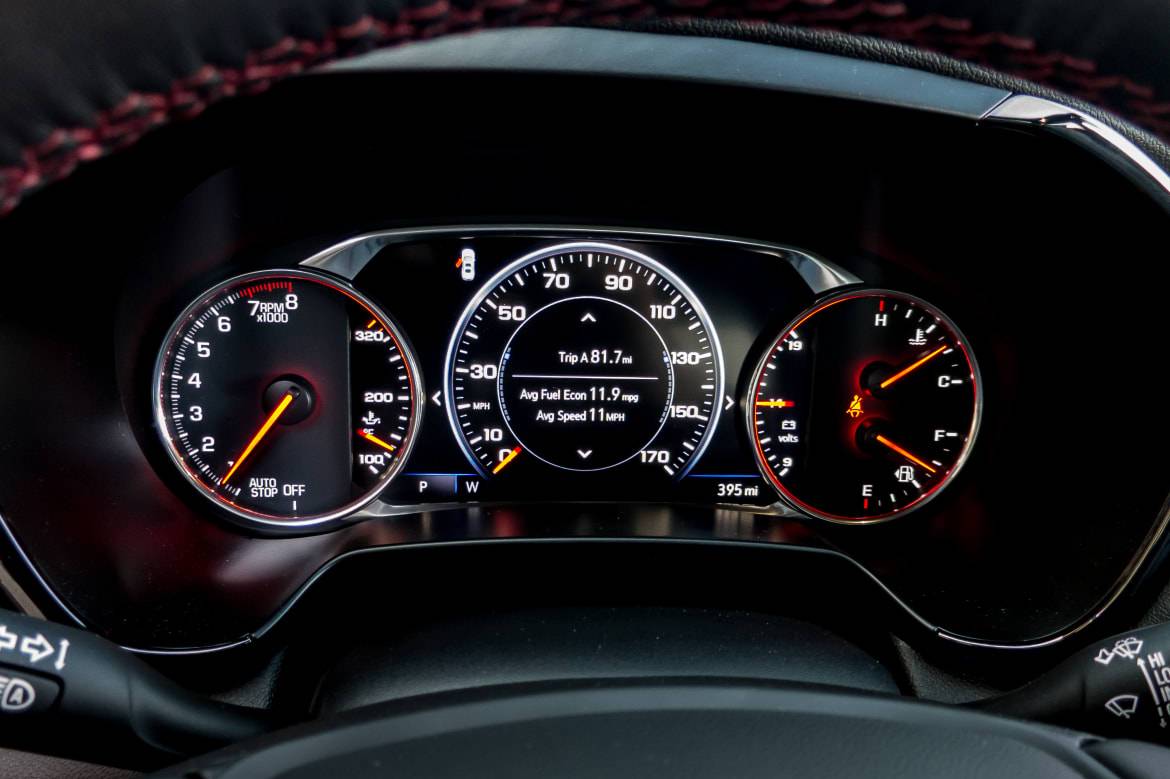 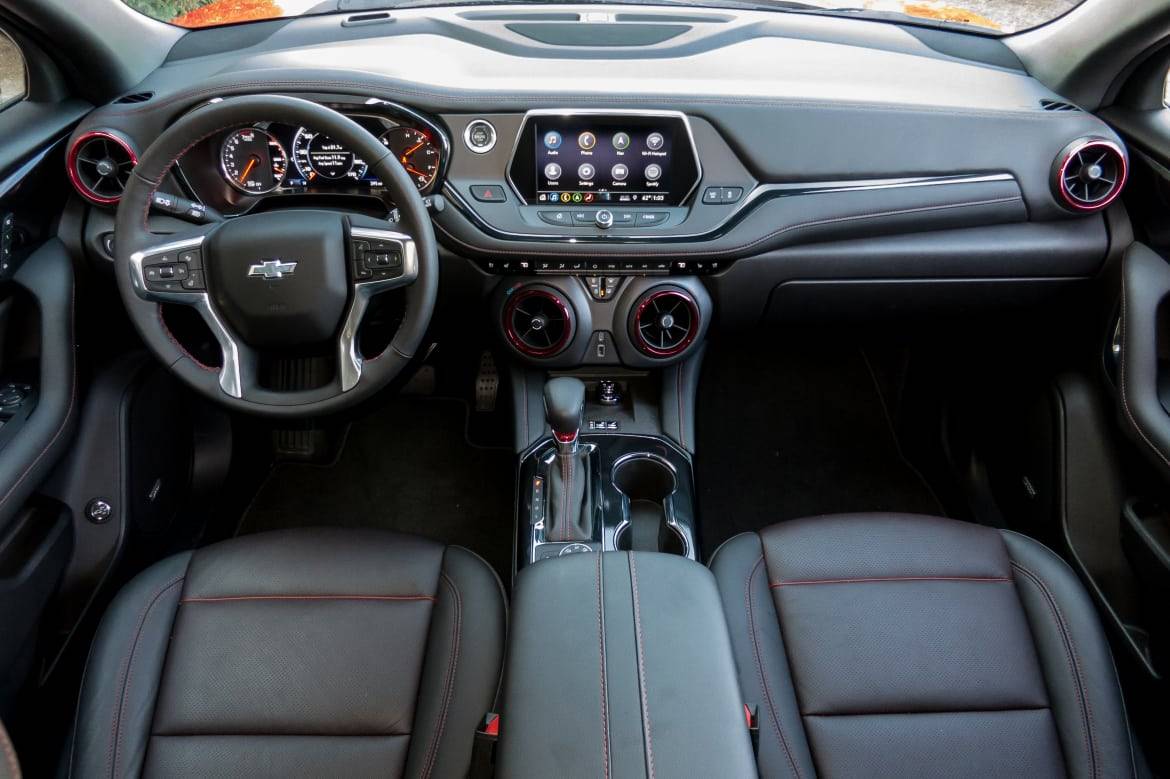 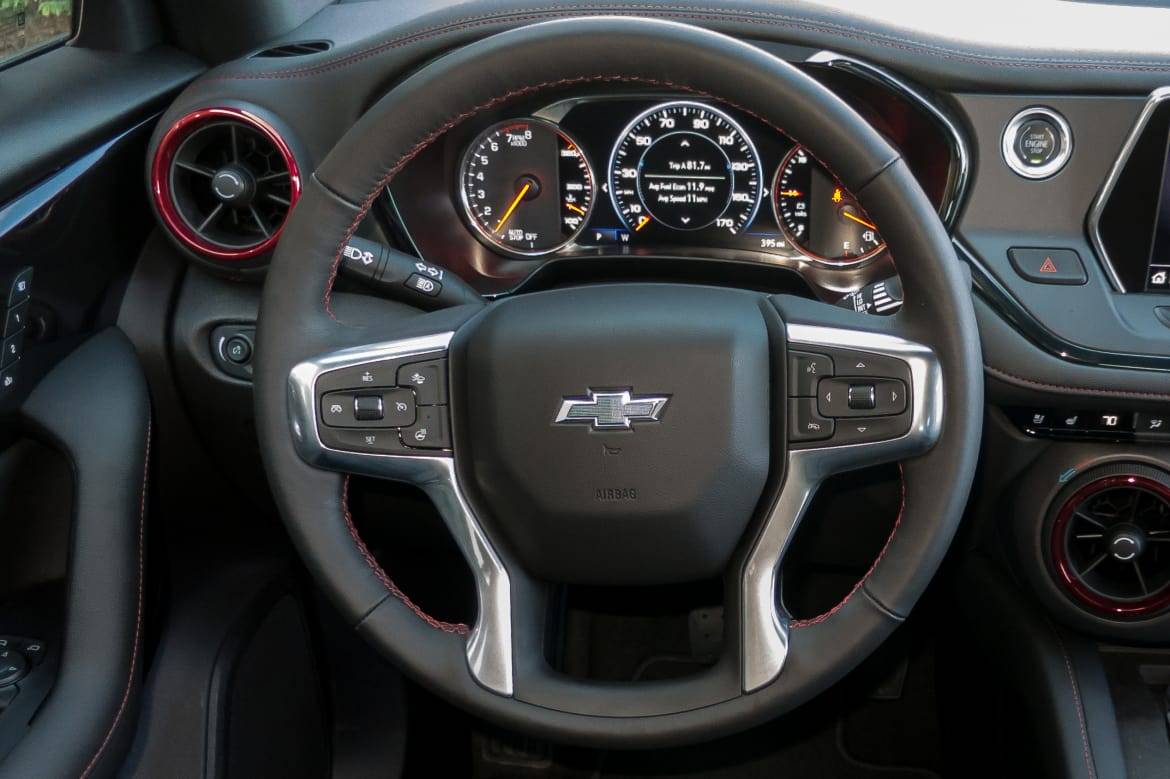 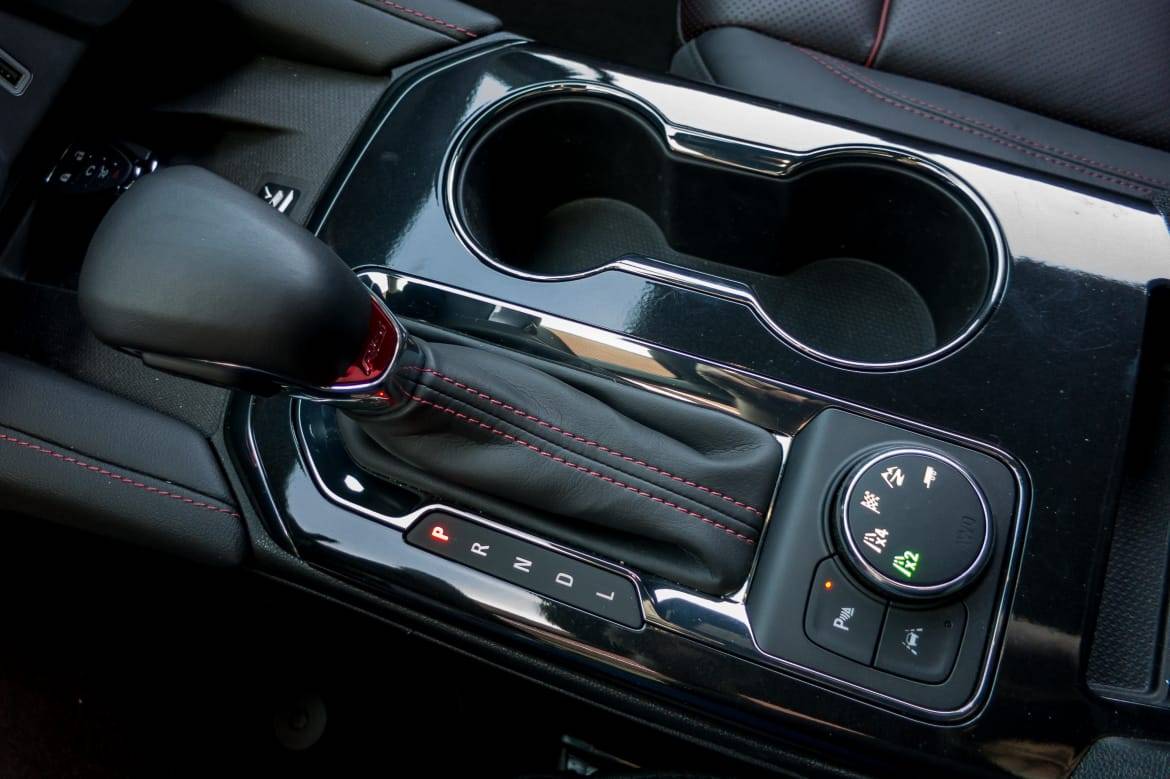 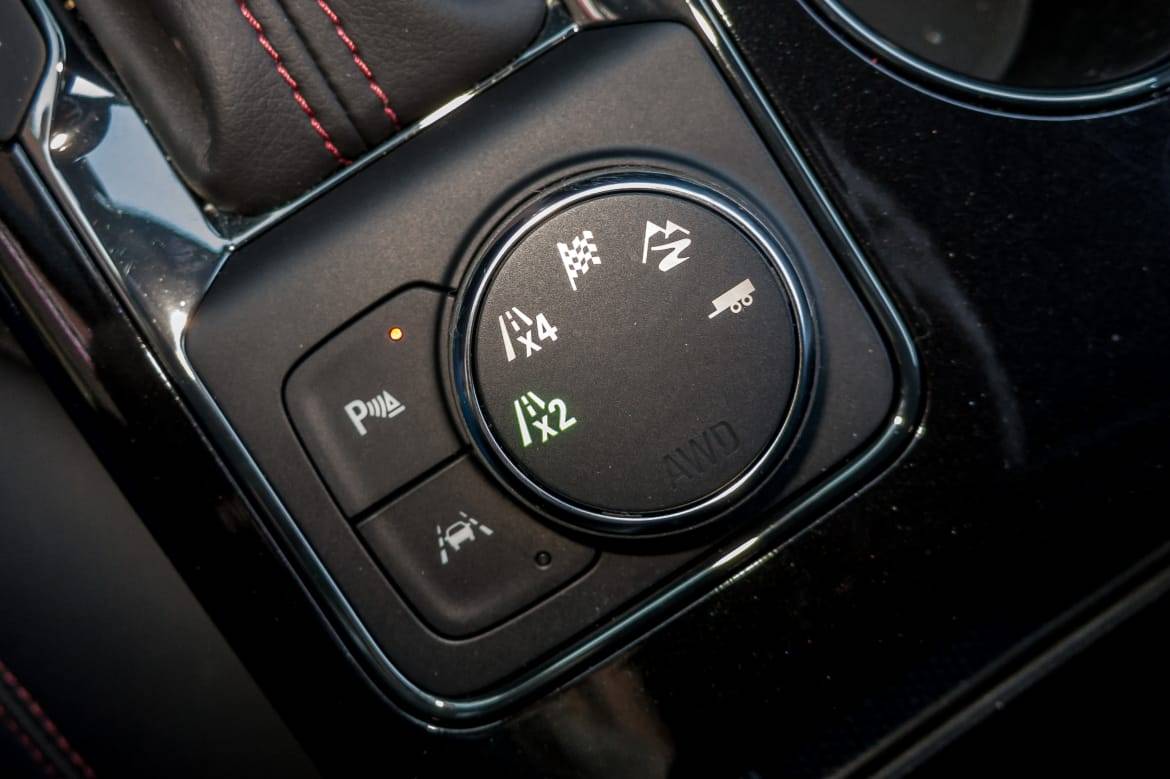 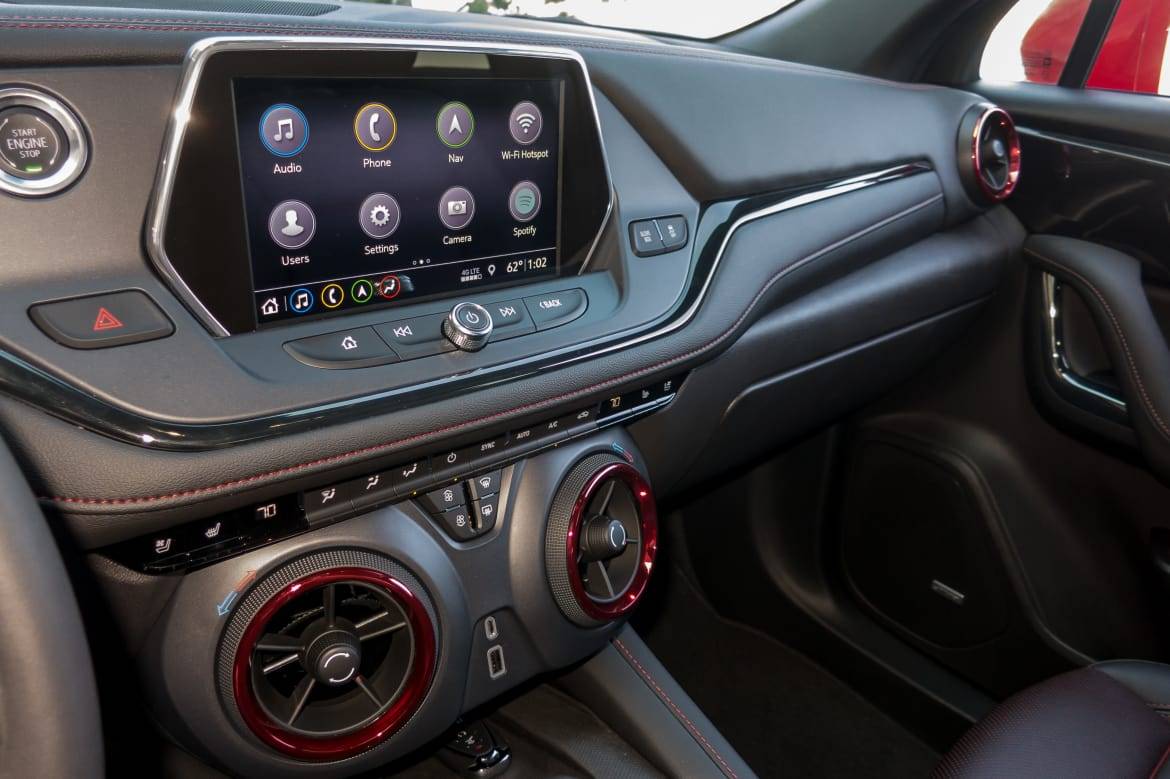 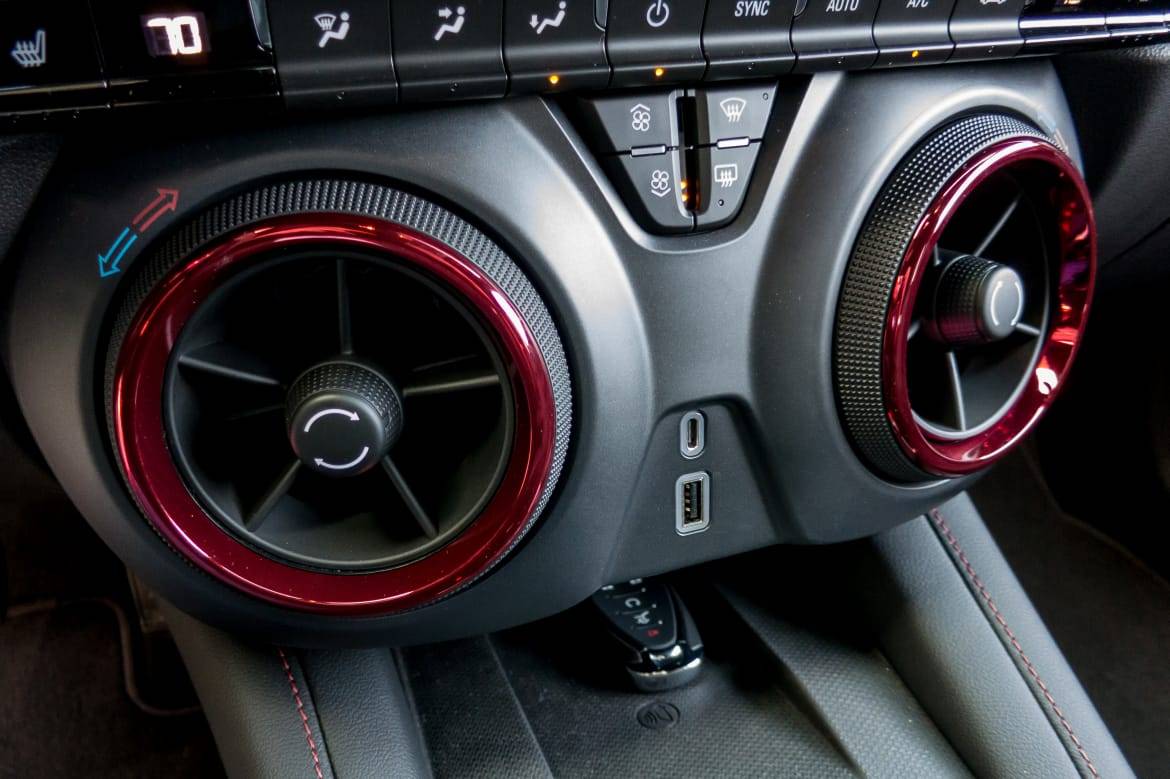 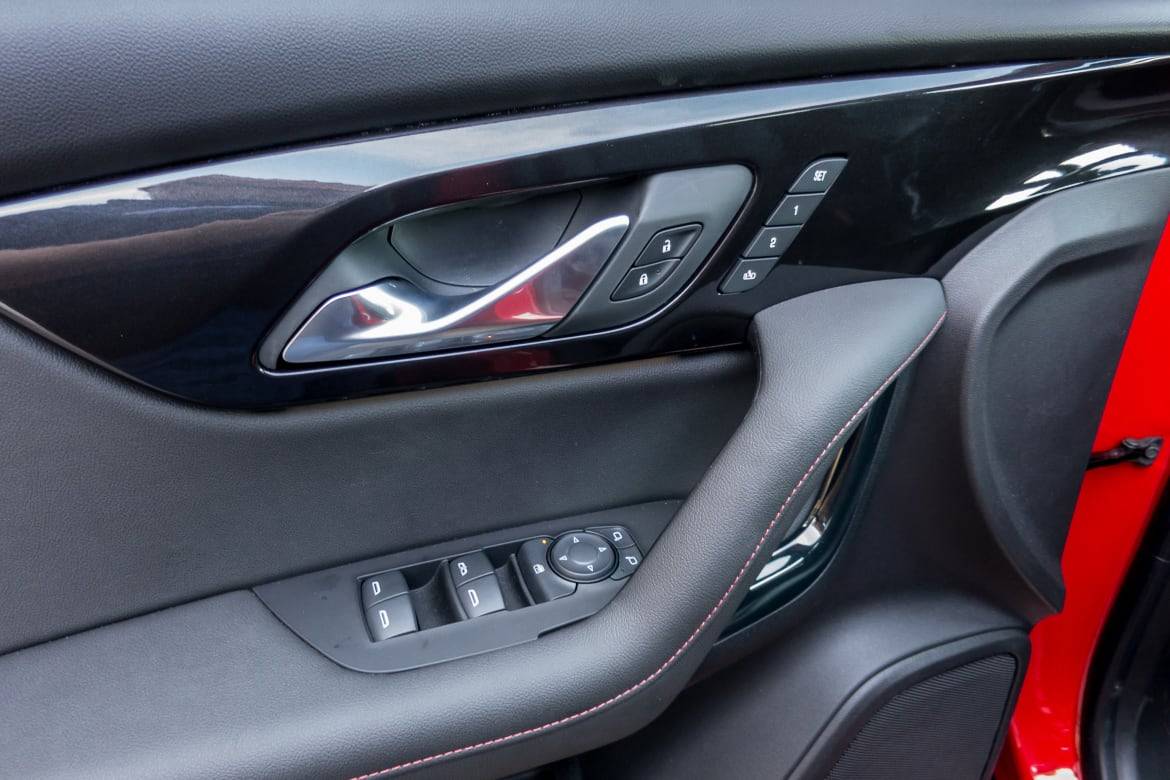 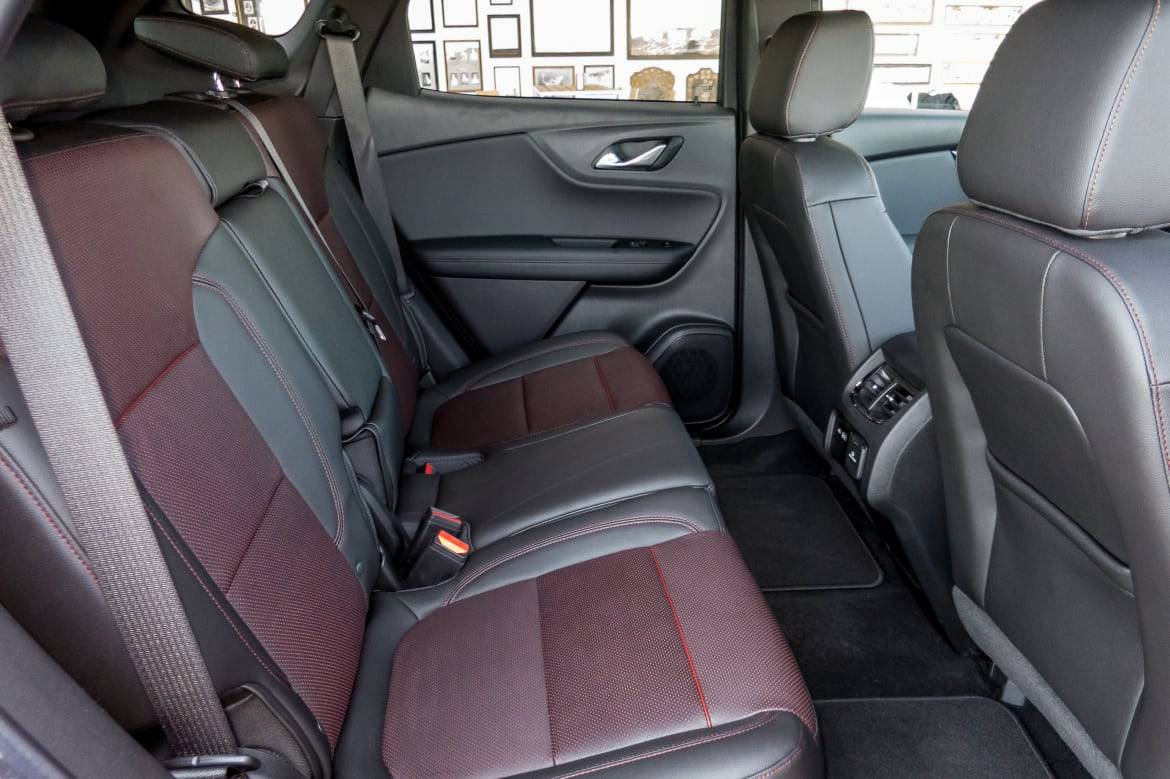 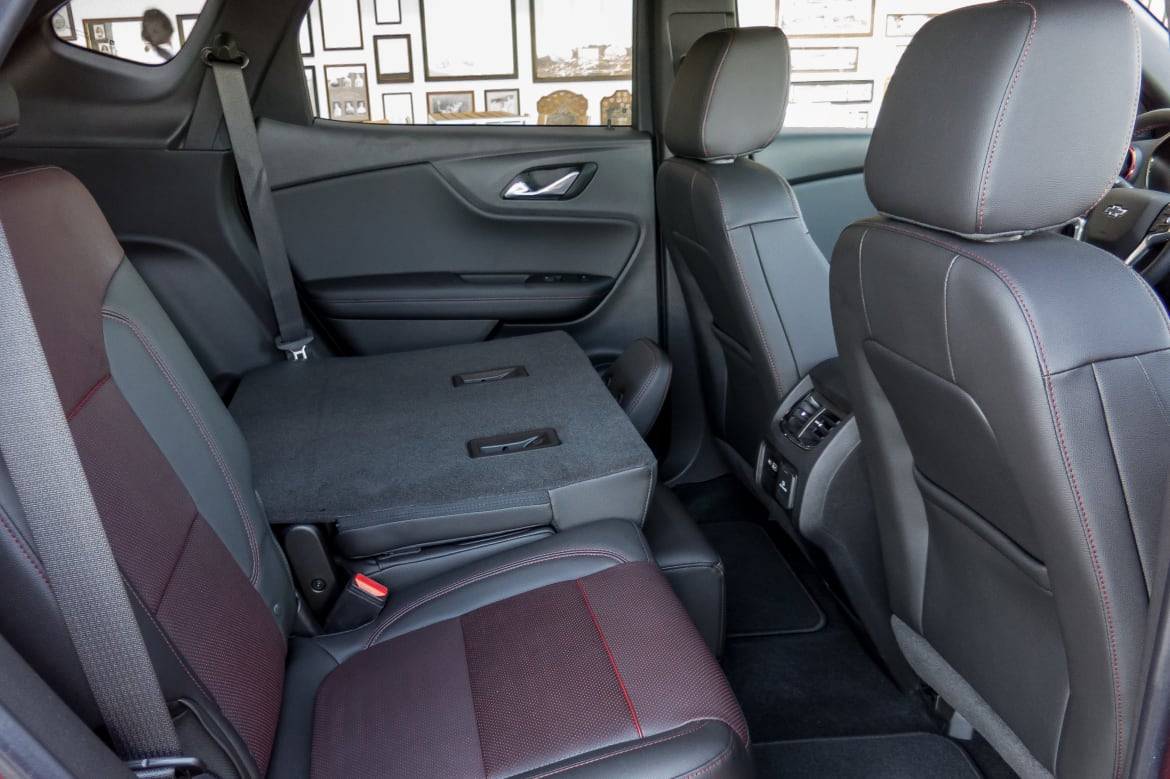 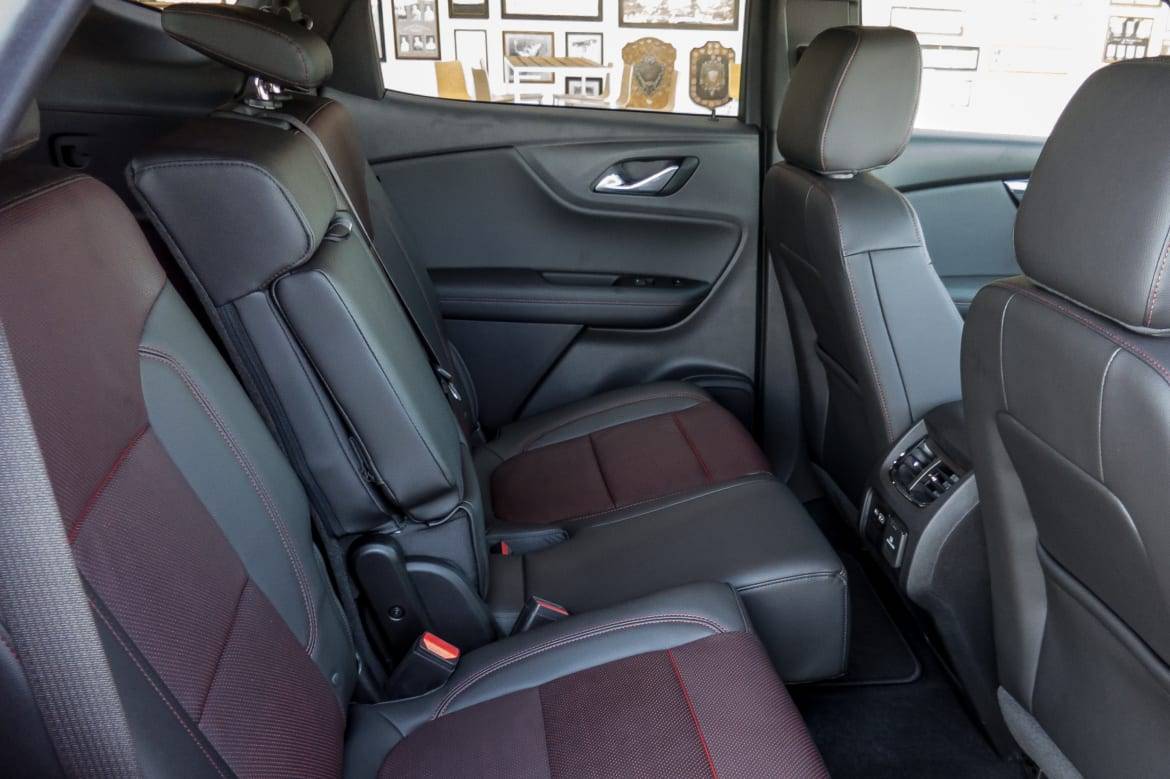 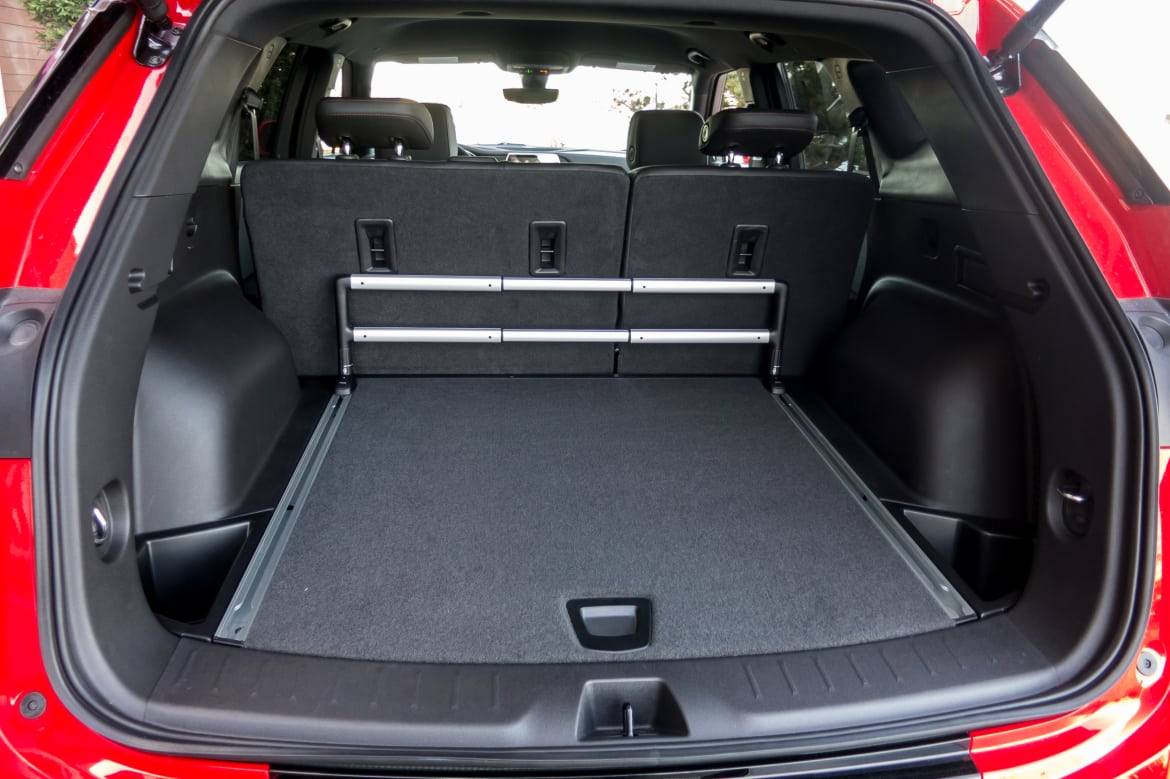 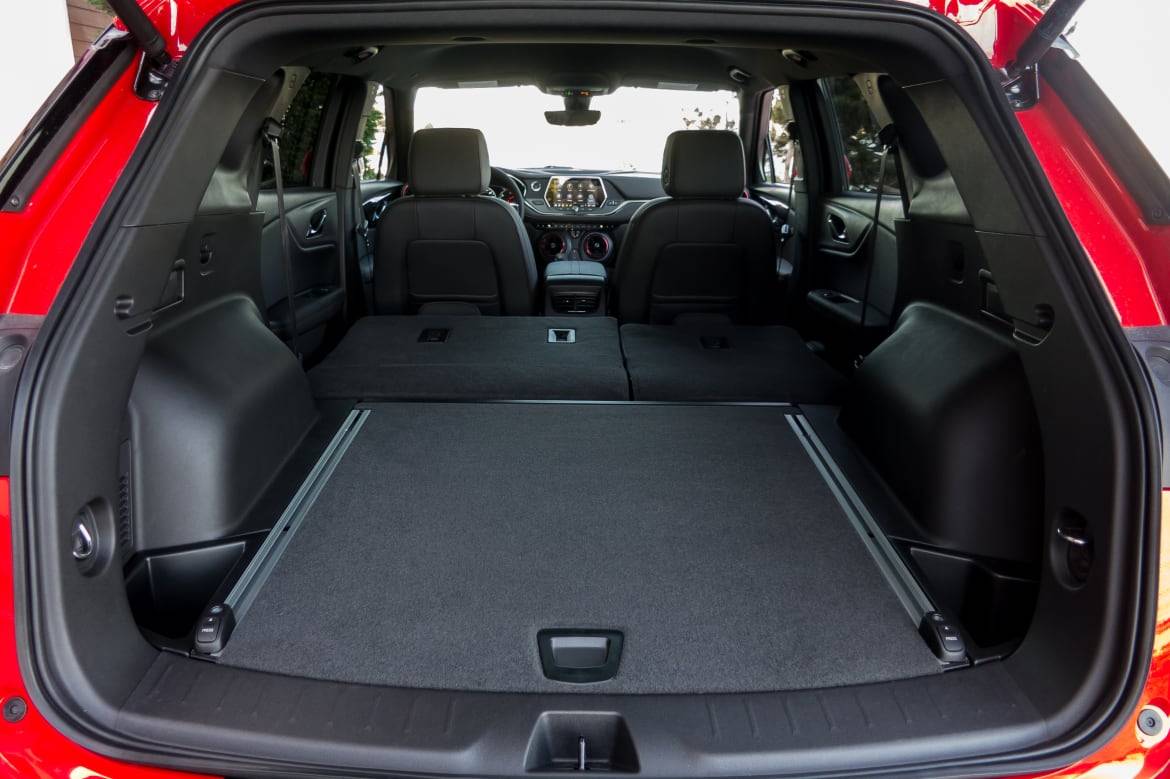 Gripes with the interior are few, but they do exist. Most prominent is the problem with all GM interiors lately: materials quality. Some of it is perfectly fine — the dash, for instance, looks and feels good, as do the controls and touchscreen. But the door panels feature the same cheap, thin plastic trim and hard door tops as the Camaro, and the plastic quality falls off dramatically in the backseat, as well. It doesn’t have the more upscale look and feel of today’s Honda products, but it does match up well to the latest Nissan Murano or Hyundai Santa Fe. My other gripe is with the steering wheel, which feels rather thin compared with some competitors’ vehicles. There are also no molded grippy parts to fit your hands, something that would’ve been an easy addition to the RS model to further improve its sporting character.

Starting price for the new Blazer is a tick under $30,000 including destination fee, with loaded examples topping off around the $55,000 mark. That’s pretty much spot-on for Chevrolet’s stated competition, which includes the Nissan Murano, Hyundai Santa Fe, Ford Edge and even potentially the Jeep Grand Cherokee (we’re not quite sure this one fits, however, Chevy marketing folks). The thing is, when you start exploring the upper end of this price spectrum, $46,000 will get you a well-equipped Blazer RS — but it will also get you a well-equipped Edge ST that satisfies sports SUV enthusiasts in much more rapid fashion. The Premier, however, is more of a matchup for the premium trims of these competitors, putting Chevy squarely in the hunt for stylish two-row SUV shoppers.