The verdict: The redesigned 2022 Hyundai Tucson is a value-oriented compact SUV with promising refinement, but higher trim levels swap in cumbersome touch-sensitive controls — a deal breaker that should keep any well-optioned example off your list.

Versus the competition: Minus those miserable controls, the Tucson is otherwise a lot of car for the money, with above-average drivability and a roomy cabin to boot.

The Tucson comes with a gasoline four-cylinder engine and front- or all-wheel drive; Hyundai also offers hybrid and plug-in hybrid drivetrains, both with AWD exclusively. Nine trim levels span the three powertrains, with prices for the gas-only and hybrid ranging from a little over $26,000 to around $39,000; Hyundai had yet to issue pricing for the plug-in hybrid as of publication. We evaluated two well-equipped test cars, one gas-only and the other a hybrid.

Related: 2022 Hyundai Tucson: What Do the SE, SEL, N Line and Limited Cost? 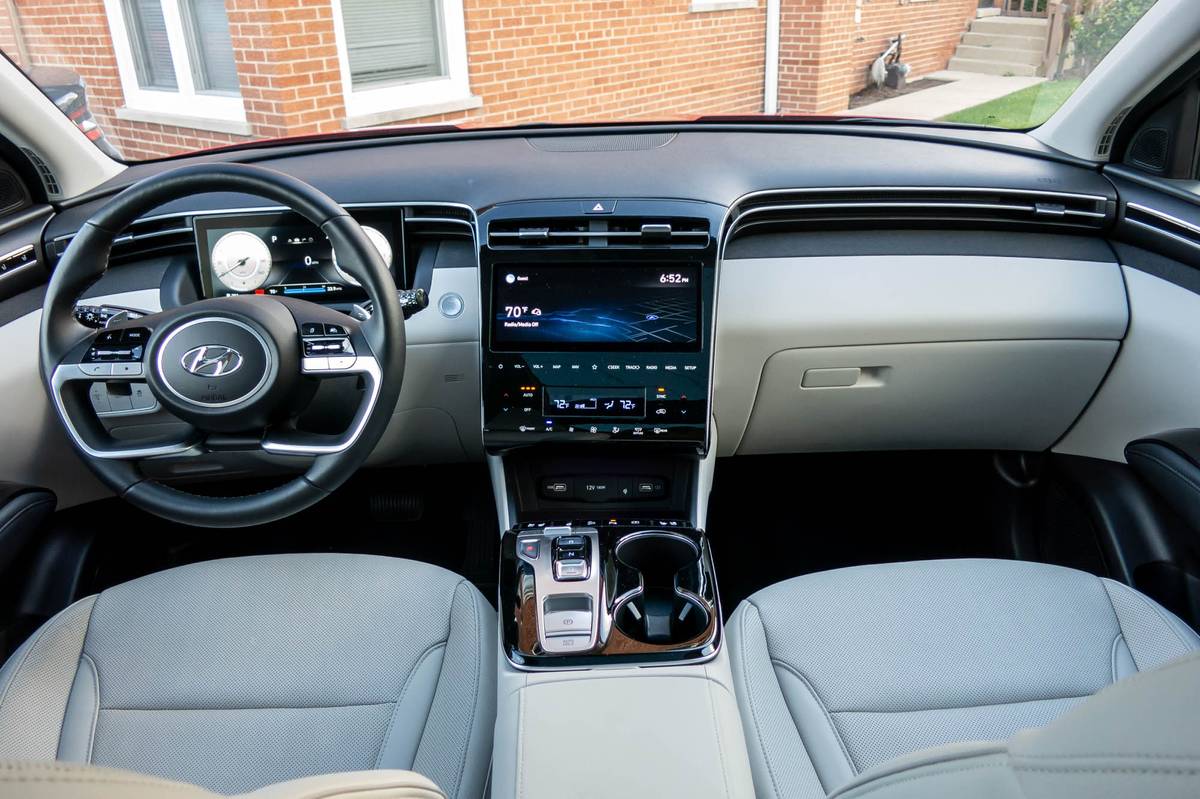 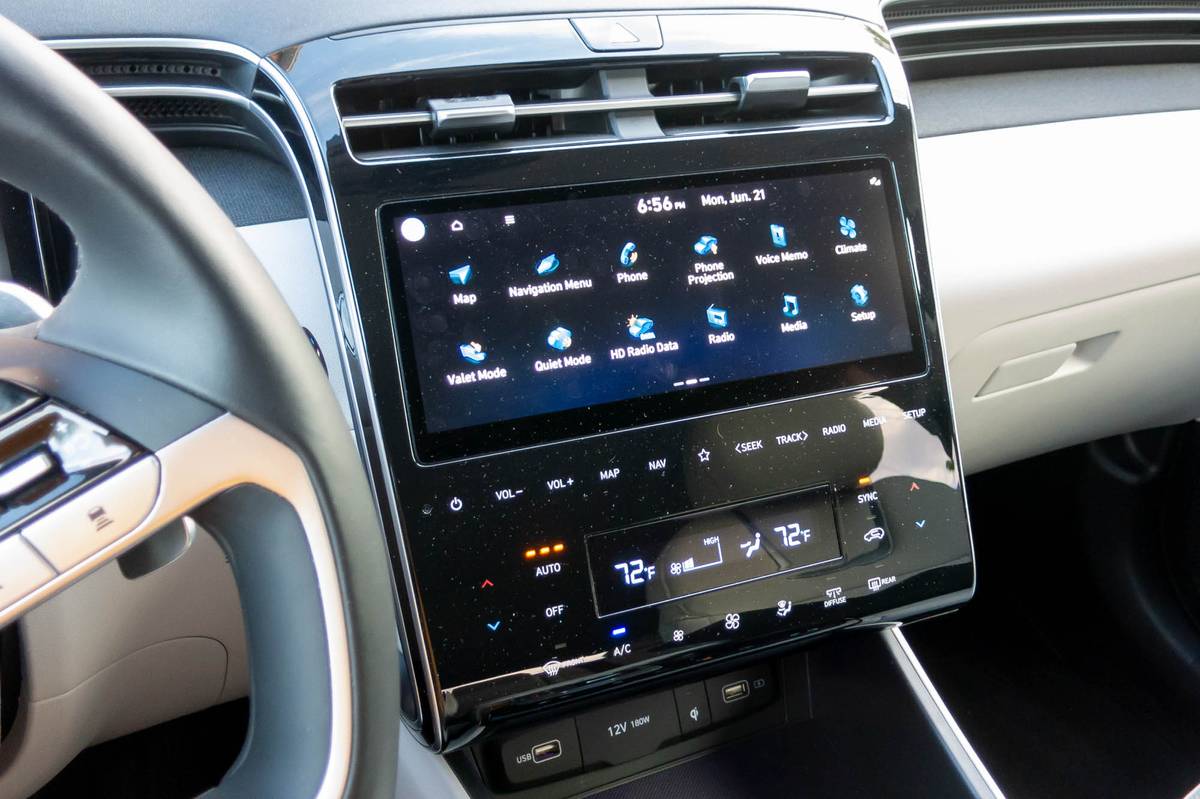 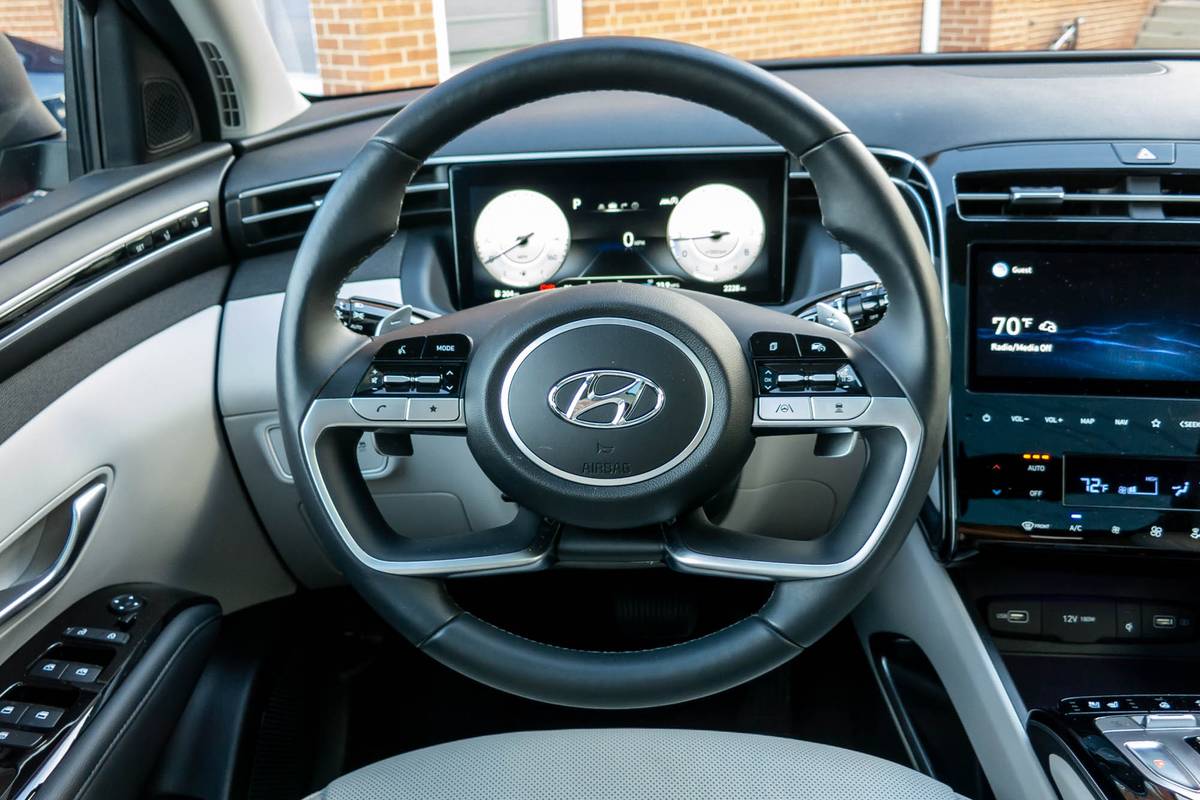 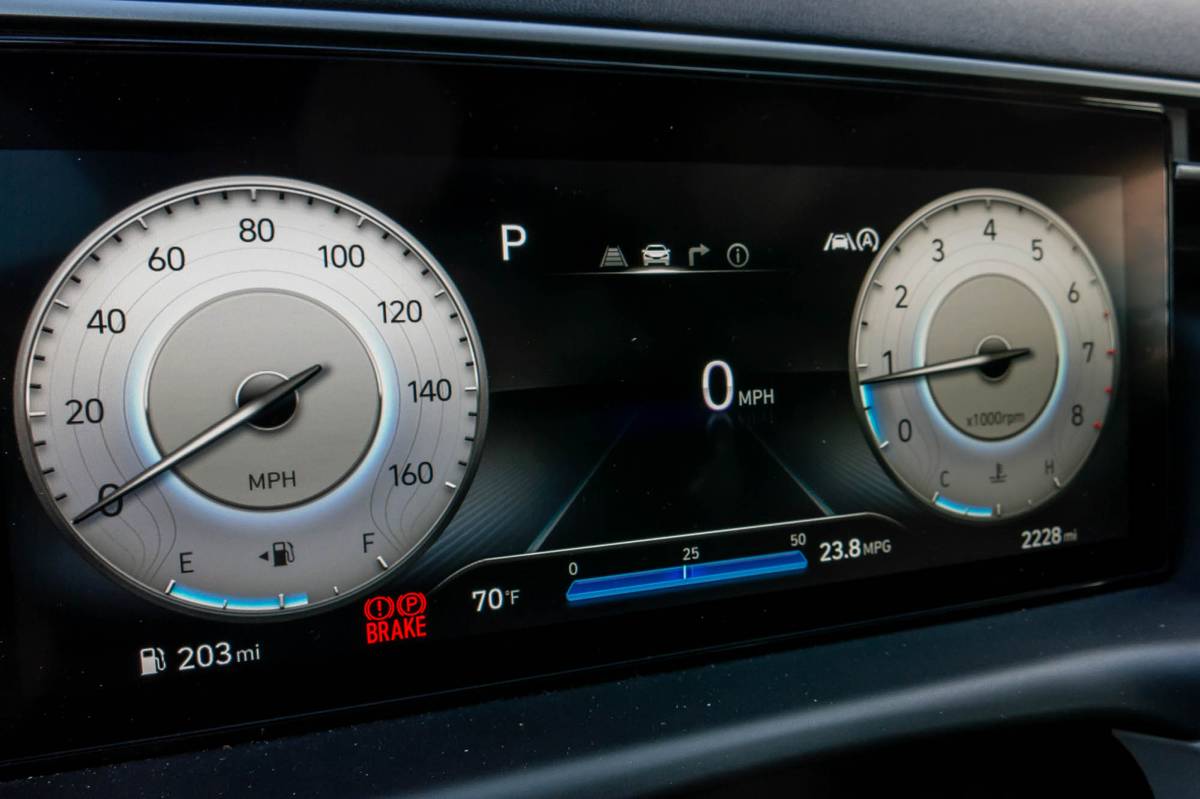 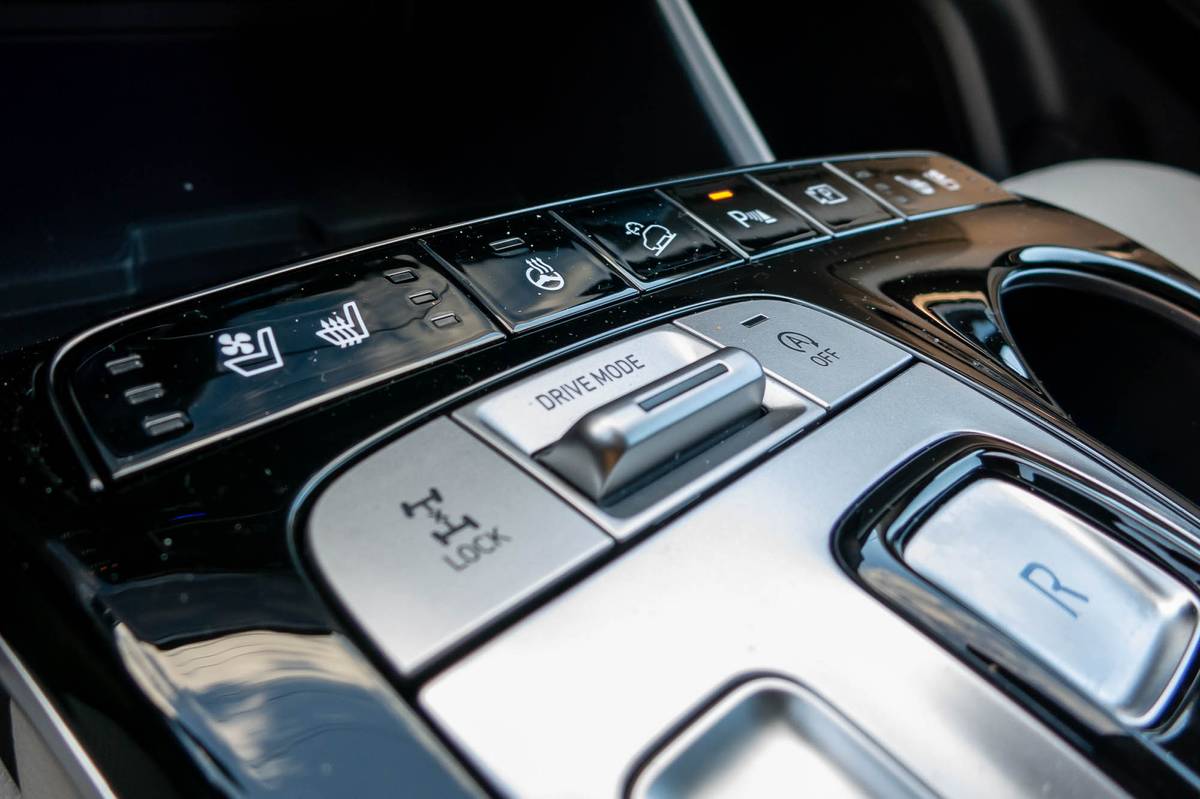 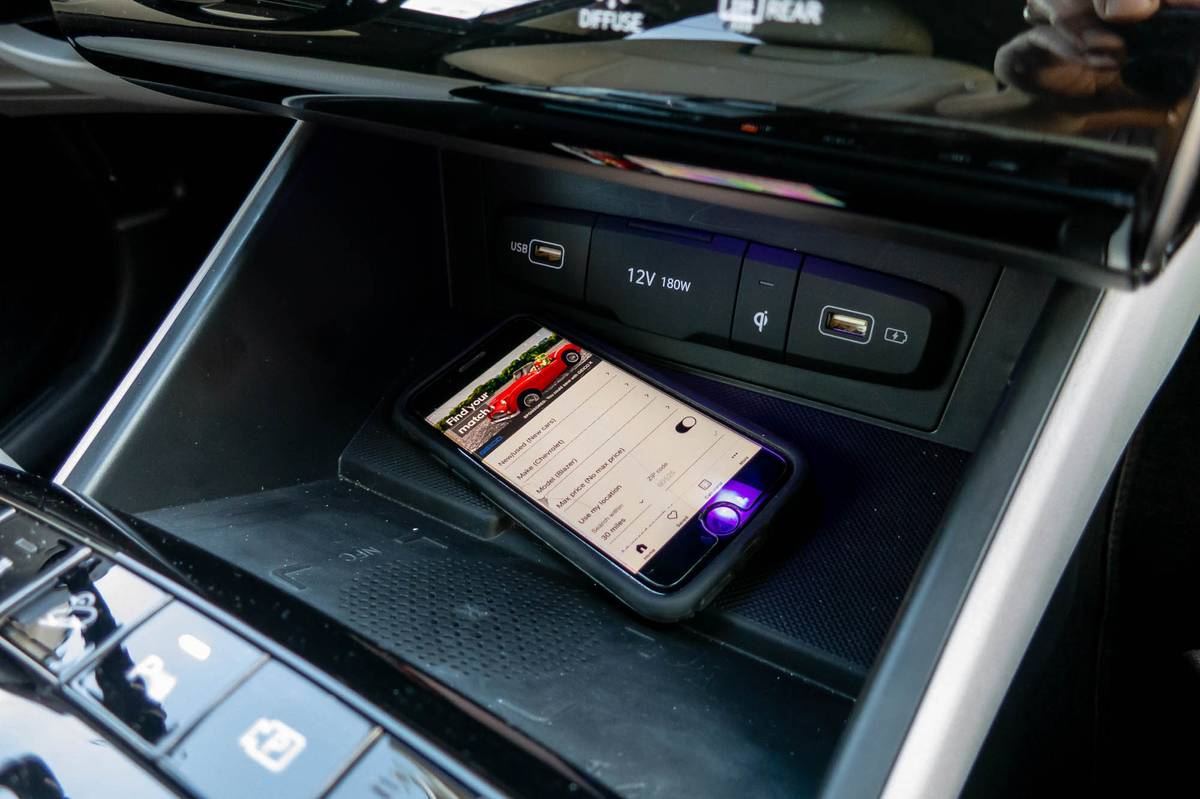 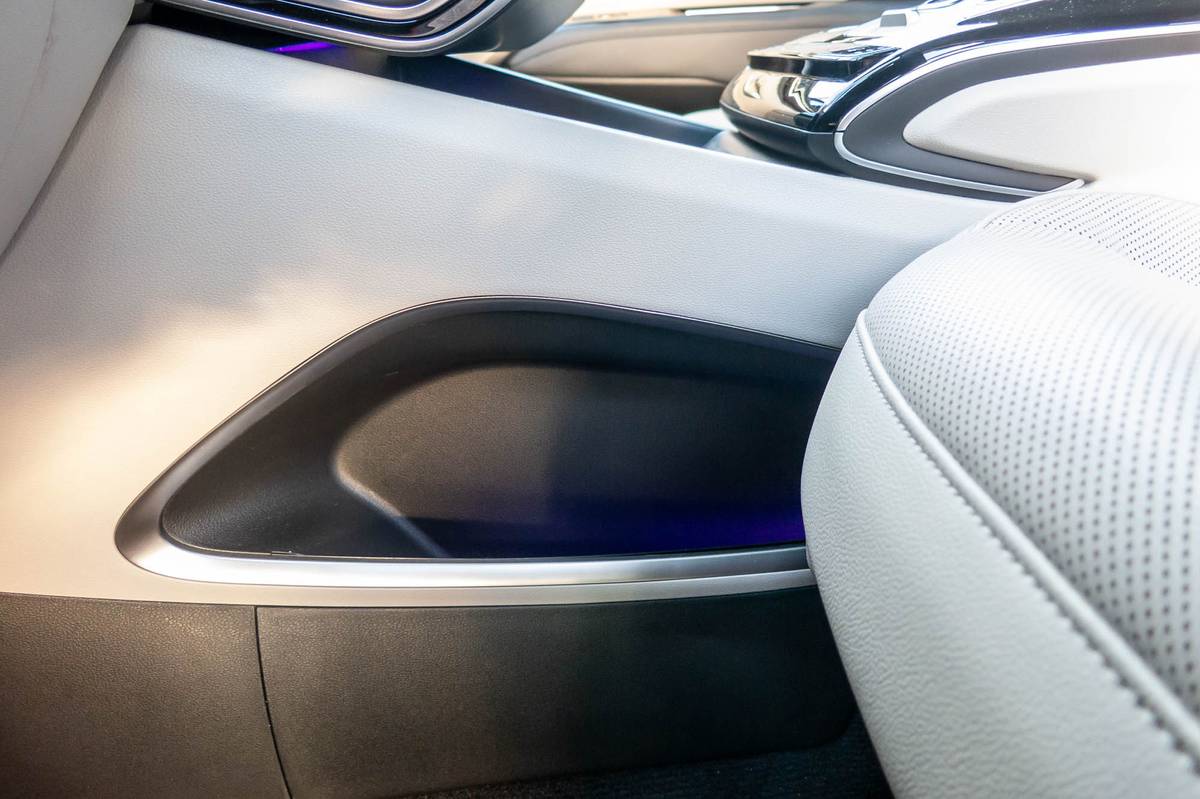 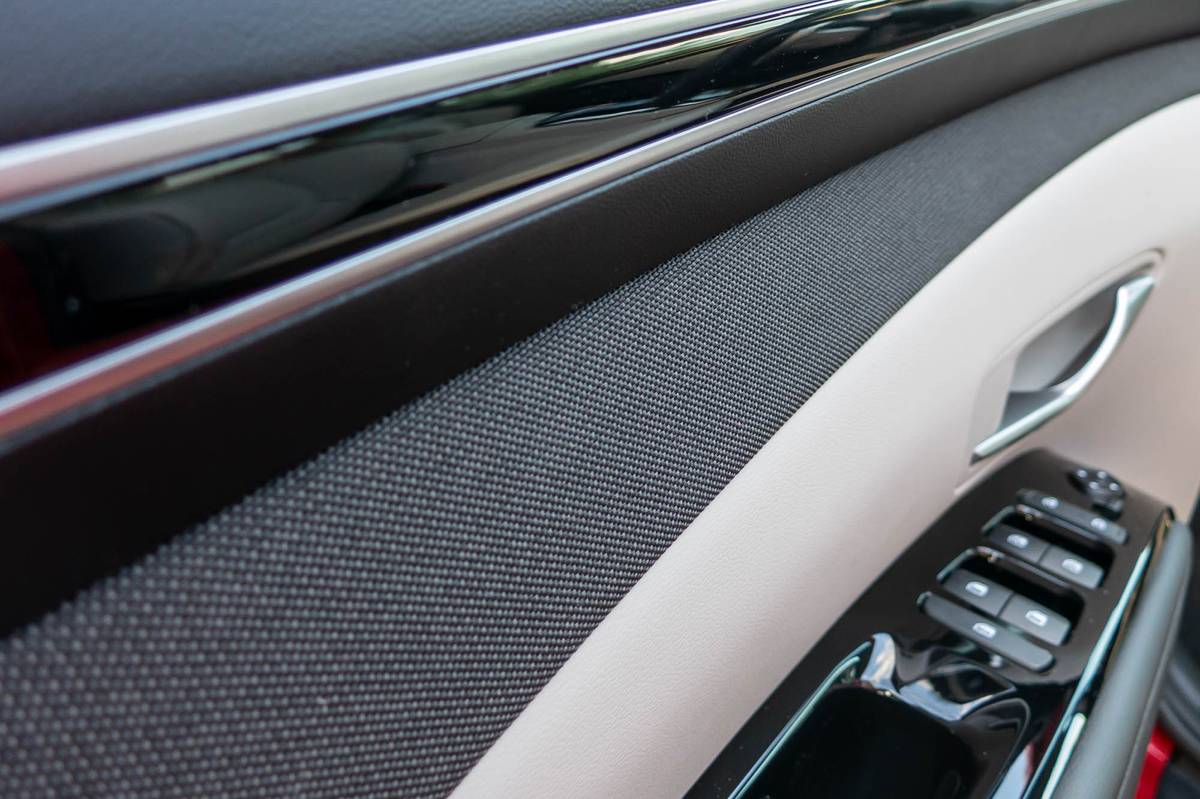 I’ll get to the Tucson’s overall merits in a bit, but the elephant in the room must come first: Higher trim levels of the Tucson adopt touch-sensitive dashboard controls in place of physical buttons for all manner of things — volume, tuning, multimedia shortcut keys, nearly all the climate controls. We’re seldom this dismissive of a car outright, but these buttons are fussy to use all the time, constantly diverting your attention from the road to determine where your finger lands. We aren’t the only ones put off by the controls; leading consumer surveys also indicate owners want physical controls. (I also reject the notion that the irritation subsides over time. Touch-sensitive controls afflict appliances in my home, too — three space heaters and a range hood. I’ve had them for years, and they’re just as insipid today.)

Lower Tucson trim levels, on the other hand, have physical volume and tuning thumbwheels, as well as physical — albeit manual — climate controls. Most climate controls become touch-sensitive in the Tucson Hybrid, and by the time you get to the top trim level of either model, the whole thing’s a single blasted touch panel. Unless you’re a glutton for irritation, avoid these versions entirely. 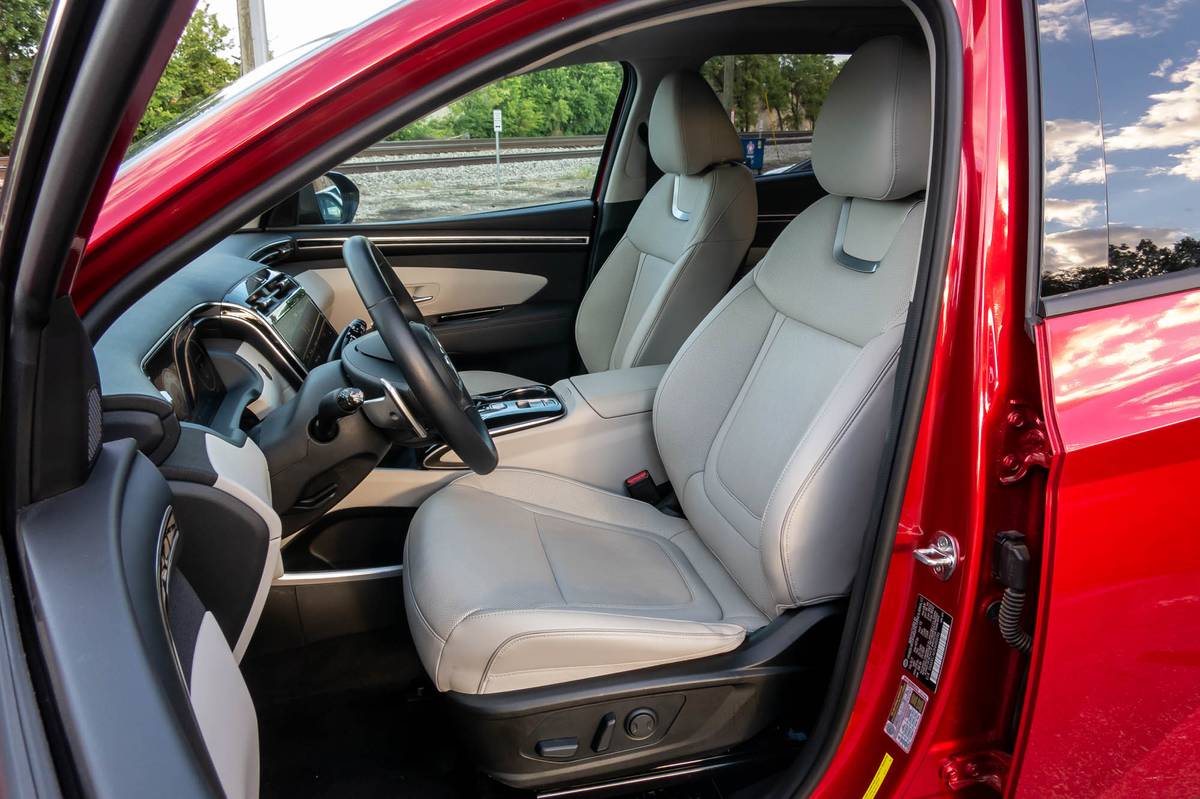 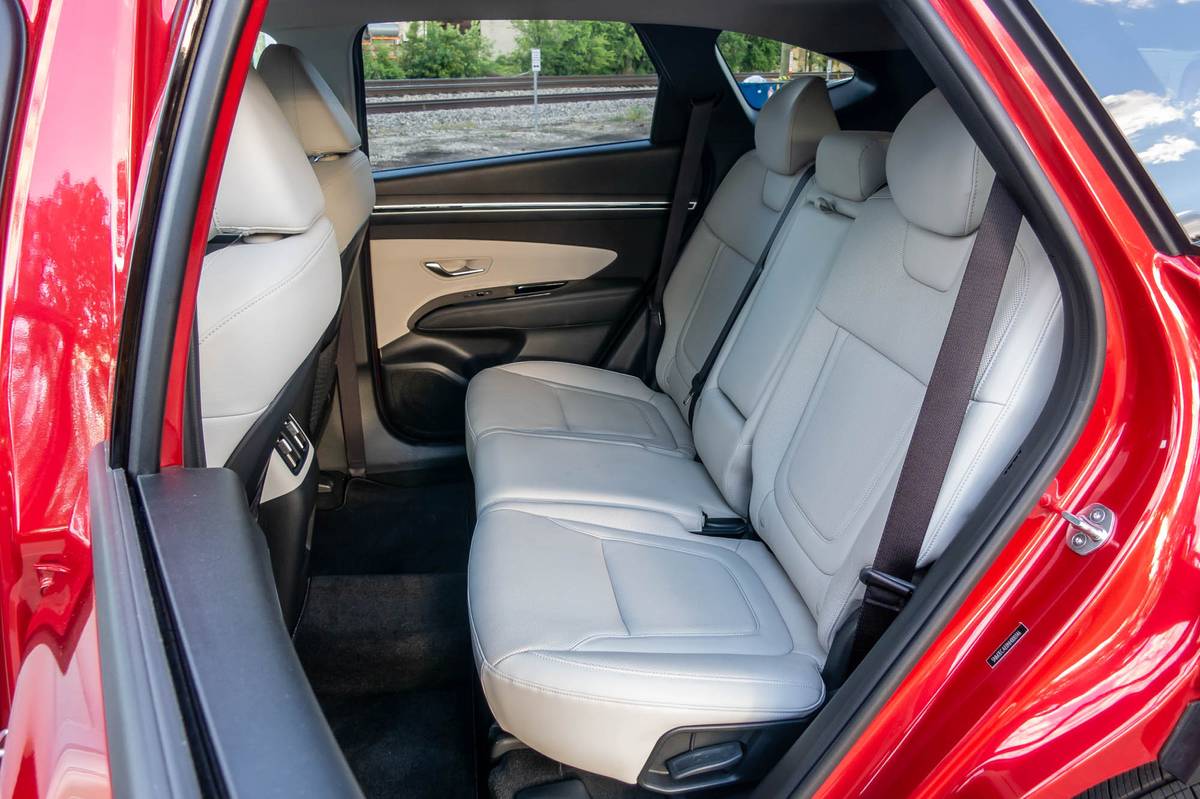 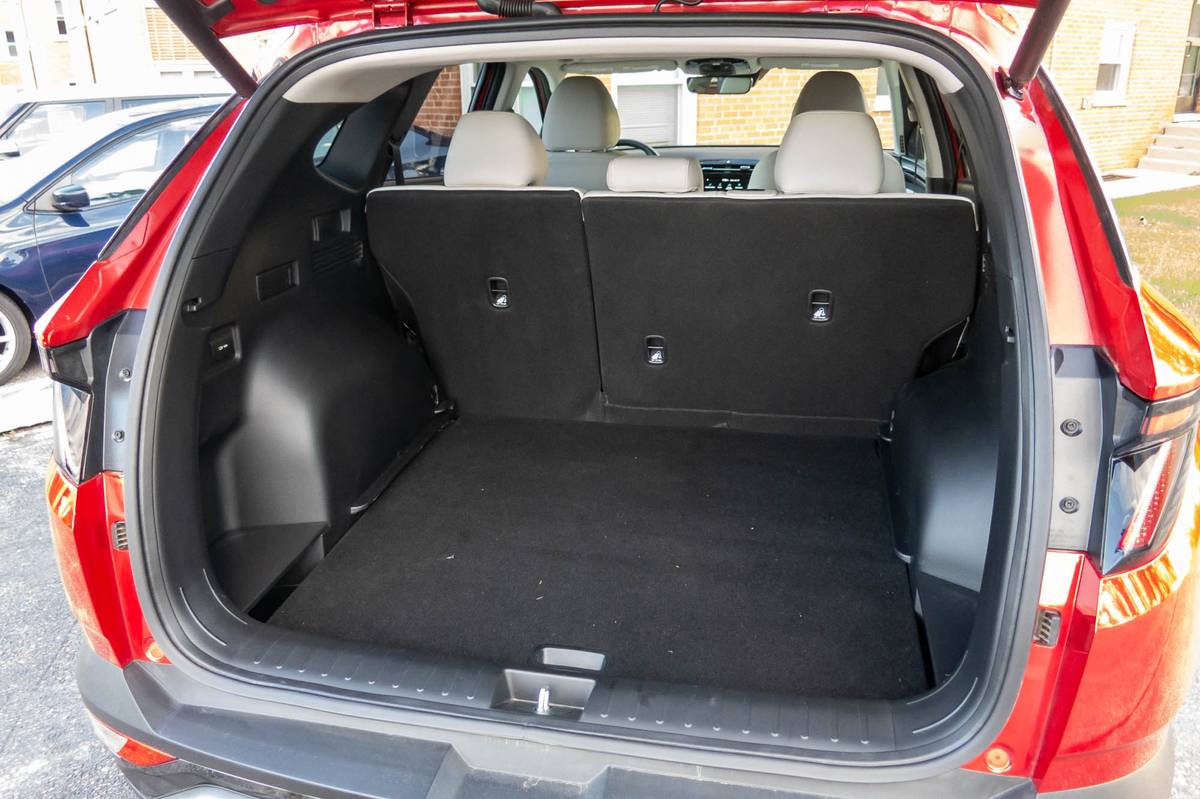 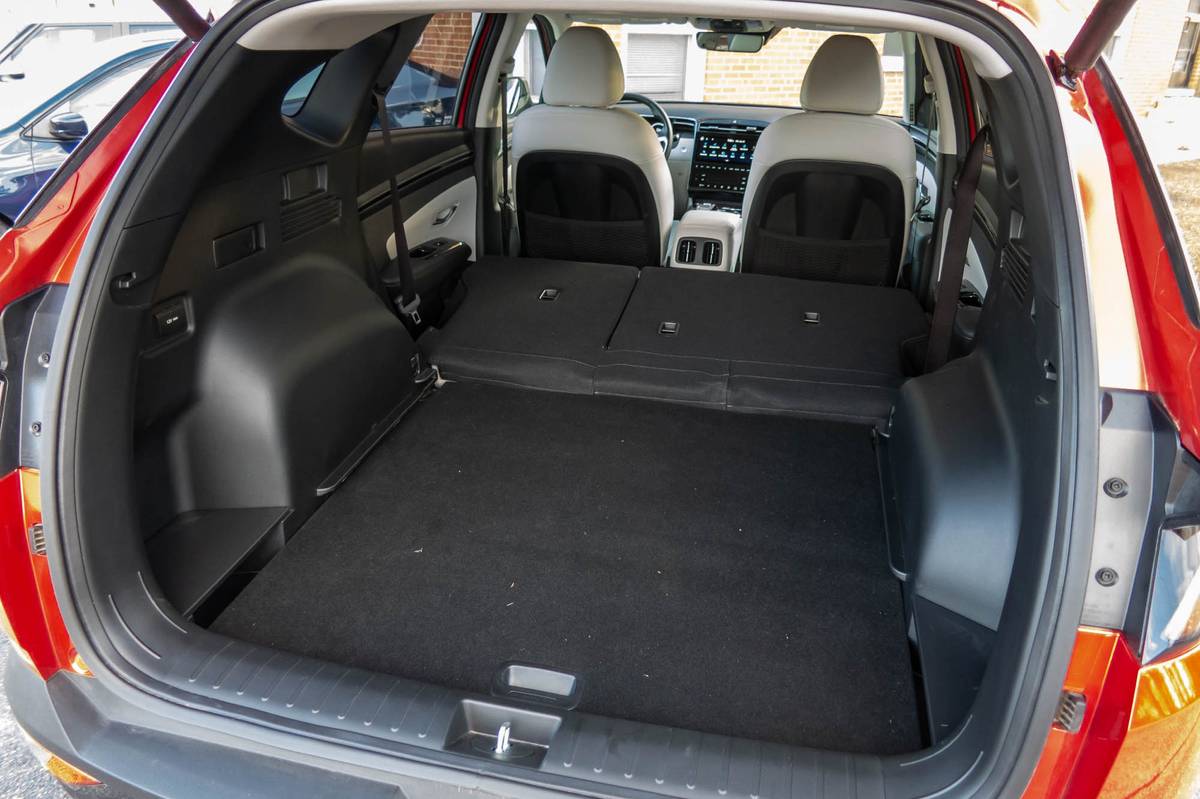 What About Lower Trims?

Other than its top trim levels, the Tucson holds potential. Aside from the touch panel, other controls operate with precision and heft, though Hyundai’s push-button gear selector is less intuitive than a conventional gearshift. Lower trim levels get an 8-inch touchscreen with Apple CarPlay and Android Auto, both wireless, while higher trims have a 10.25-inch unit with wired integration. (Hyundai has a recurring problem with its plus-sized touchscreens lacking wireless smartphone integration; here, as elsewhere, the base screen is functionally superior.) Lower trims pair the touchscreen with conventional gauges, while mid-level and higher editions swap in a crisp digital gauge panel, also 10.25 inches (measured diagonally).

Cabin materials are competitive with the class, with an open, layered design and mostly attractive textures throughout. The exception is the rear doors, where Hyundai seems to have pinched some pennies. The new driver’s seat is a commanding perch when fully raised, though owners who prefer to sit farther forward might find the center console clips inboard knee space at that elevation. Backseat legroom is good, but headroom in both rows is merely adequate with the available panoramic moonroof, which both our test cars had. Without the roof, Hyundai says headroom gains 0.5 inch in back and 2 inches up front — both much needed.

Our independent testing of cargo space measured 21.46 cubic feet of volume behind the conventional Tucson’s backseat and 21.66 cubic feet in the Tucson Hybrid. The hybrid ranks a touch higher than the space we measured in the Honda CR-V Hybrid (19.61 cubic feet) and Toyota RAV4 Hybrid (20.69), while the gas-only model substantially beats the Subaru Forester (18.17), Mazda CX-5 (17.91) and Nissan Rogue (17.12). That’s impressive.

We have yet to test the Tucson Plug-in Hybrid, but it lacks the dual-level cargo floor you get in the other two versions, so it’s likely to have considerably less volume. By Hyundai’s own specs, cargo volume behind the plug-in’s backseat is some 20% less than in the Tucson Hybrid. 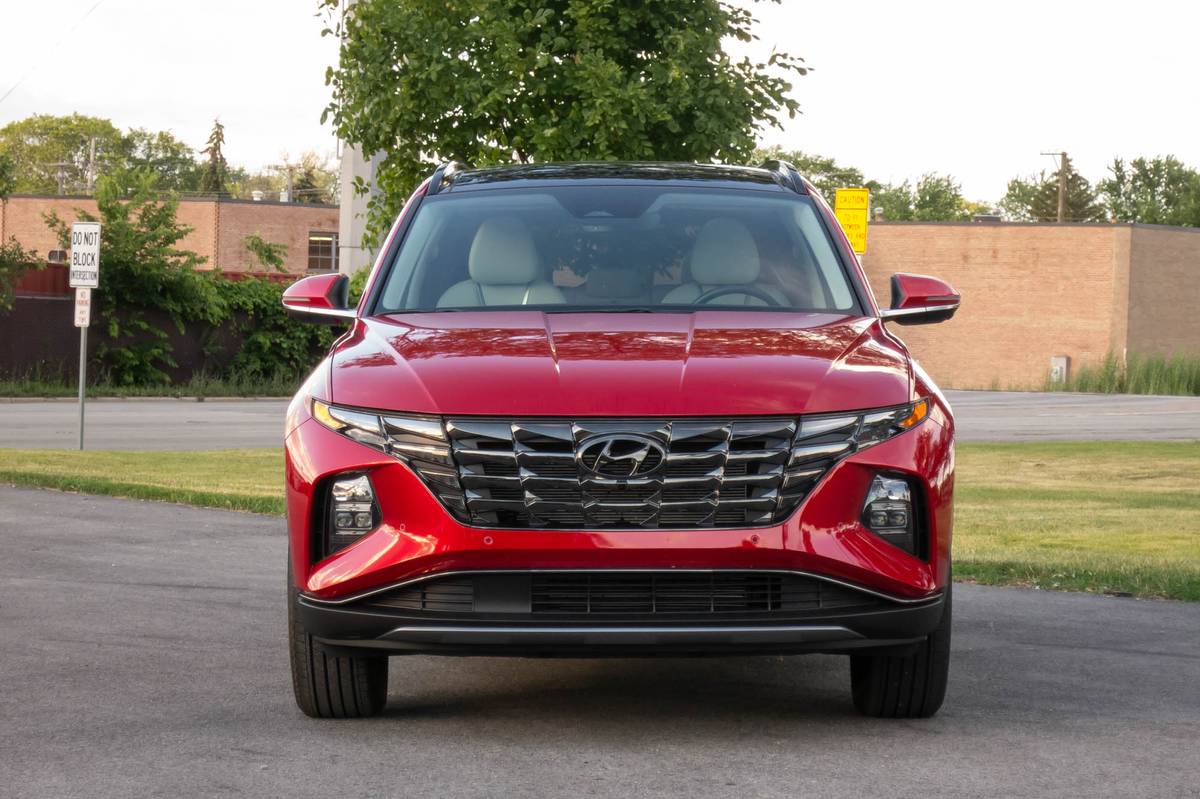 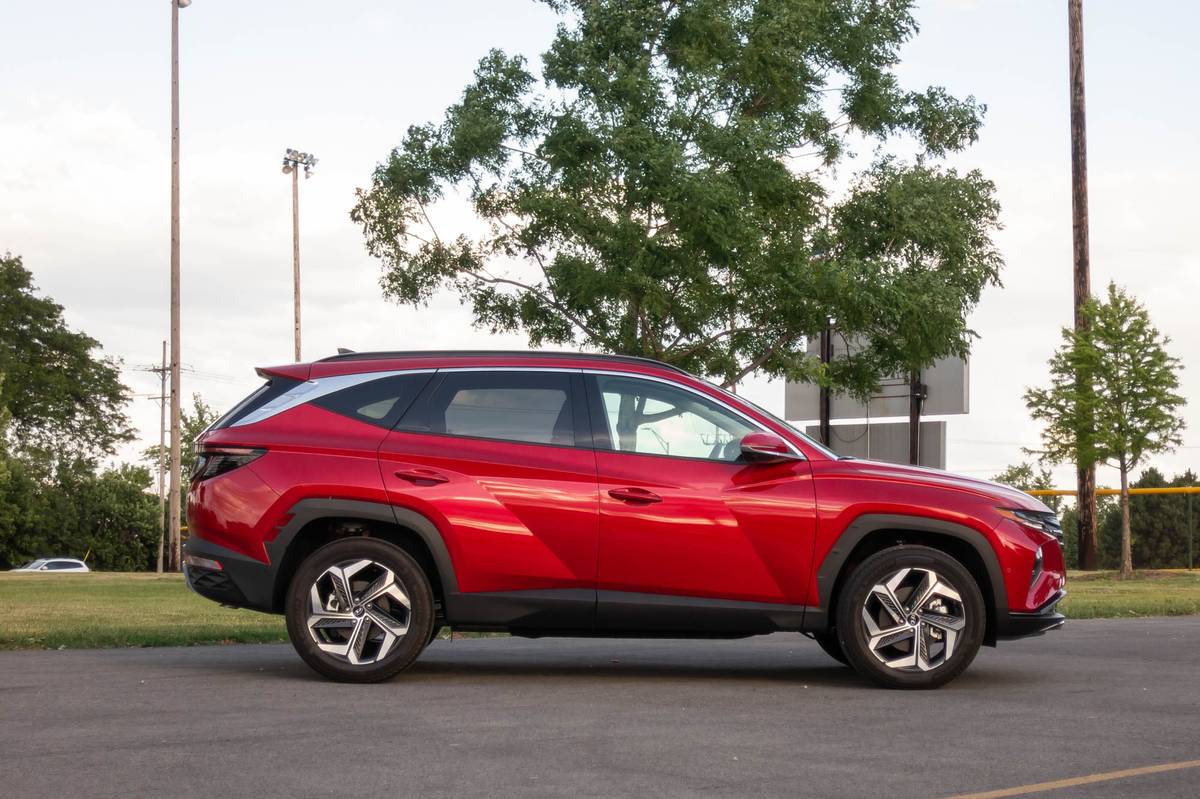 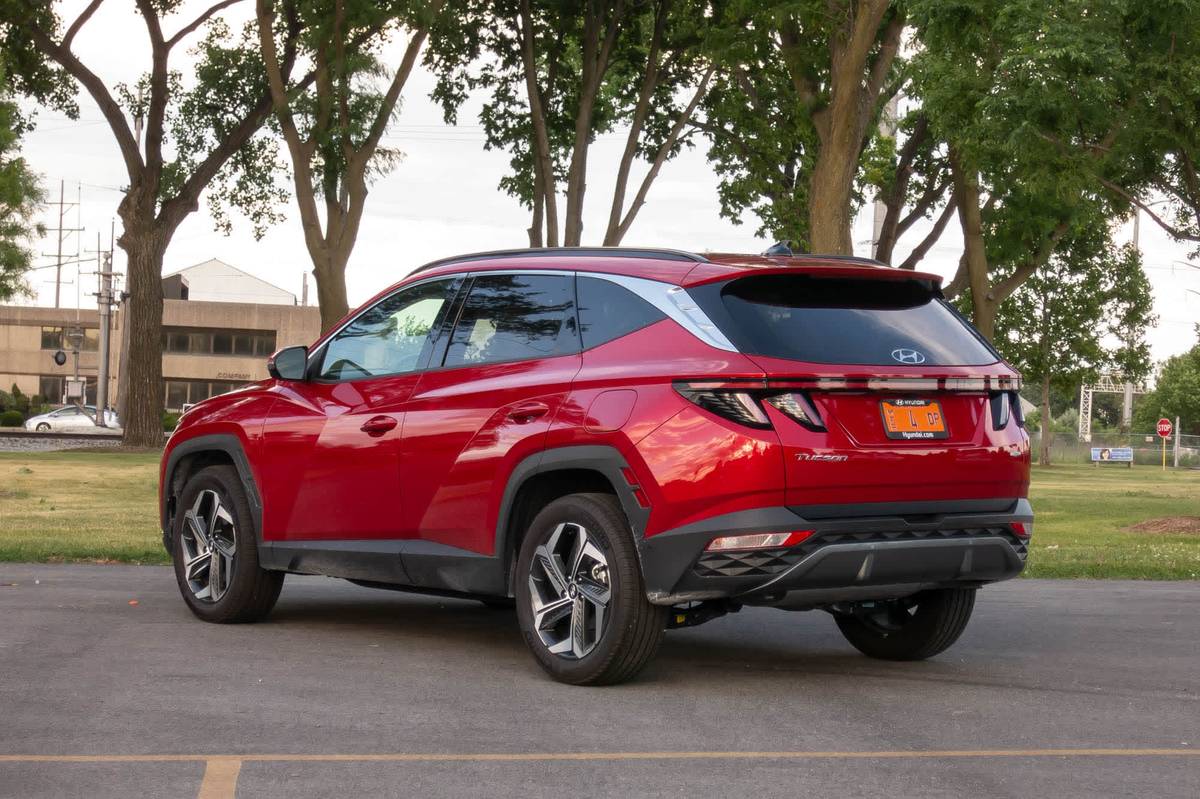 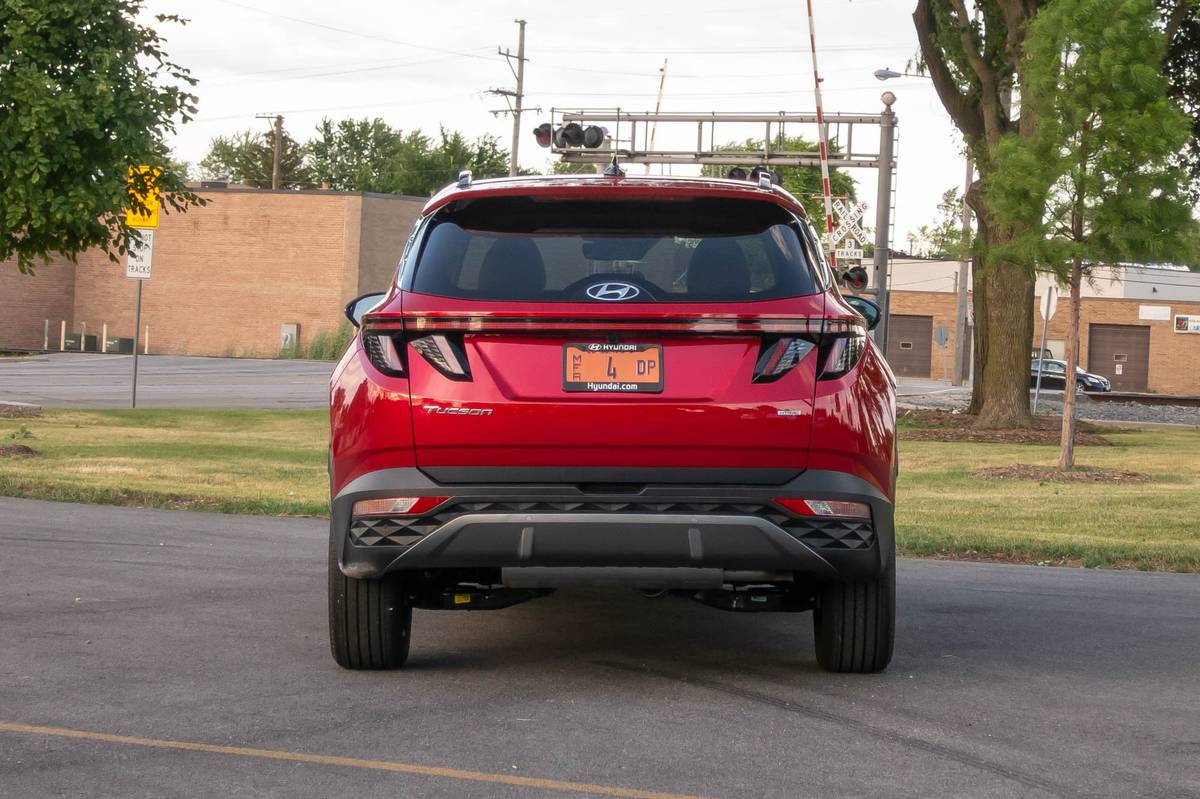 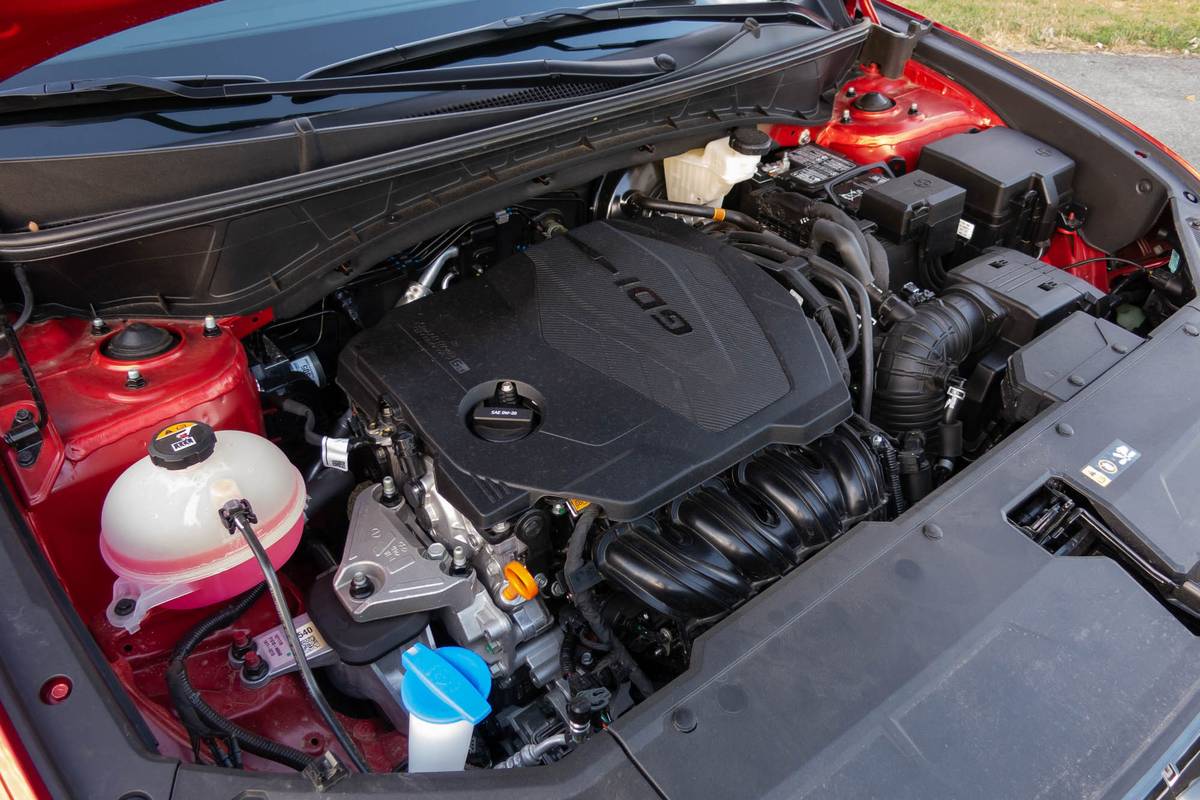 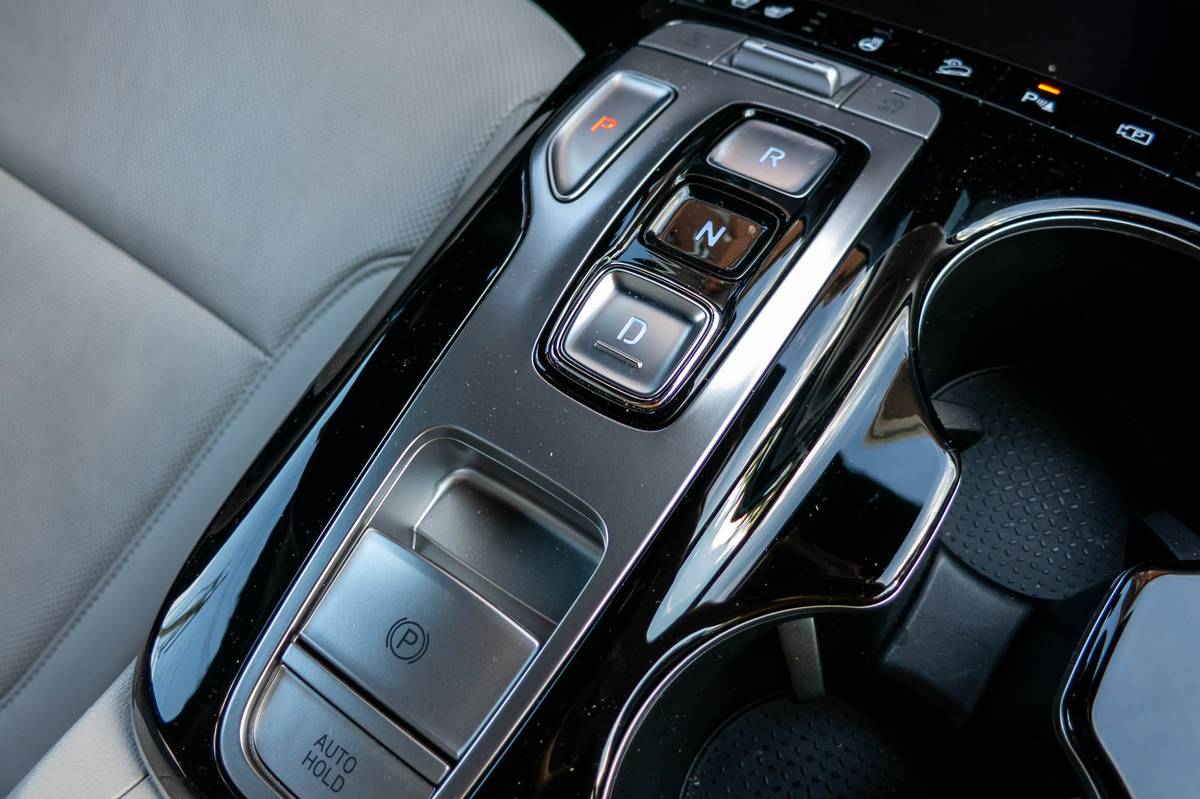 Body motion in both the hybrid and gas-only models seems reasonably controlled, with minimal bounciness after rapid elevation changes or recessed sewer covers, though there’s some lateral movement over mid-corner bumps. Impact harshness is muted enough overall, even with the 19-inch wheels and low-profile tires on both our test cars. Lower trims have 17-inch wheels and higher-profile tires that may make them even softer, but we didn’t evaluate one.

Gas-only models pair a naturally aspirated four-cylinder engine (187 hp) with an eight-speed automatic transmission. The eight-speed’s tendency to upshift early and often can leave you wanting more power during low-speed acceleration; instead you’re often a gear too high and a thousand rpm too low. The transmission becomes a serviceable companion above that, downshifting with minimal delay if you need to accelerate at highway speeds. Pushed to higher rpm, the engine serves up adequate, if noisy, power.

Steering feedback is lackluster, but it improves notably with a driver-selectable Sport mode that dials back power assist. Body roll is limited throughout, but overall balance feels as nose-heavy as any front-drive-based compact SUV. The Tucson Hybrid improves on balance, with enough to eliminate most of the gas-only model’s chronic understeer — a palpable result of its battery pack adding much-needed weight around the rear axle. As such, roadholding improves enough to make the hybrid SUV downright fun to throw around corners.

The Tucson Hybrid’s drivetrain is sometimes fun. It pairs a pint-sized, turbocharged four-cylinder engine with a small electric motor for a combined 226 hp, and the combination makes for swift, linear power when both are in play. (The linearity comes thanks to a conventional six-speed automatic transmission, not the continuously variable style that most hybrids employ.) Unfortunately, such spurts are rare in daily driving, where the Tucson Hybrid minimizes engine power as much as possible. Under mostly electric power, with a periodic dollop of engine, the Tucson Hybrid feels tentative, even gutless. If you lead-foot your way around town or always drive in Sport mode, the drivetrain shows its stuff — gas mileage be damned.

That mileage, by the way, is EPA-rated at 37 to 38 mpg combined — a hefty increase over the regular Tucson’s 26 to 29 mpg, depending on driveline. That’s roughly competitive with other compact hybrid SUVs.

The Tucson Plug-in Hybrid teams the turbo engine with a higher-powered electric motor, the six-speed automatic and a higher-capacity battery pack. The drivetrain combines for a Hyundai-estimated 261 hp and 32 miles of all-electric range, making the PHEV the lineup’s quickest, most efficient variant — on paper. We haven’t evaluated it yet, nor has the EPA published its own ratings.

With easy-access Latch anchors and a roomy enough second row to fit even our bulky rear-facing car seats, the Tucson passed Cars.com’s Car Seat Check with flying colors. The Tucson also earned Top Safety Pick Plus status from the Insurance Institute for Highway Safety thanks to top scores in all six crashworthiness categories, plus well-rated headlights and forward automatic emergency braking. Forward collision warning with automatic emergency braking and pedestrian detection is standard; a cyclist-detection function is optional.

The owner’s manual stipulates automatic emergency braking in the Tucson can function only at speeds up to 37 mph — well below the operating threshold offered by most competitors’ AEB systems. This isn’t the first time a car from Hyundai or its Kia affiliate has imposed such low limits, but it’s an apparent disadvantage nonetheless. (We did not test the system, and IIHS’ field tests on automatic braking max out at 25 mph.)

Should You Buy a Tucson?

Anyone considering higher trim levels of the 2022 Tucson will need to make peace with the SUV’s fussy touch-sensitive controls and consider parting with close to $40,000. (Or you could look elsewhere; plenty of other compact SUVs merge feature-rich interiors with physical buttons and knobs. This ain’t rocket science.) Fortunately, lower trims have the double benefit of strong value — the SUV starts at $26,135 with destination, undercutting the Honda CR-V and Toyota RAV4, and bringing Hyundai’s excellent warranty and class-leading free maintenance to boot — plus physical controls and better smartphone integration. Less is more: If any Tucsons are worth considering, it’s these.