Lexus has revealed its first all-electric vehicle, the 2023 RZ 450e SUV. While the luxury automaker did not beat its parent company to the all-electric punch — the Toyota bZ4X is currently on sale — the new RZ aims to be a comfortable and practical alternative for luxury EV shoppers. The 2023 RZ shares a platform with the bZ4X but offers more conventional styling that aligns with Lexus’ current SUVs.

Lexus’ newest SUV comes with standard dual electric motors that use the brand’s new Direct4 all-wheel-drive technology. Other highlights for Lexus’ first EV include a spacious interior, user-friendly tech and a Lexus-estimated 225-mile range. Some key details remain under wraps, however: The RZ’s power and torque outputs and charging times are unknown. 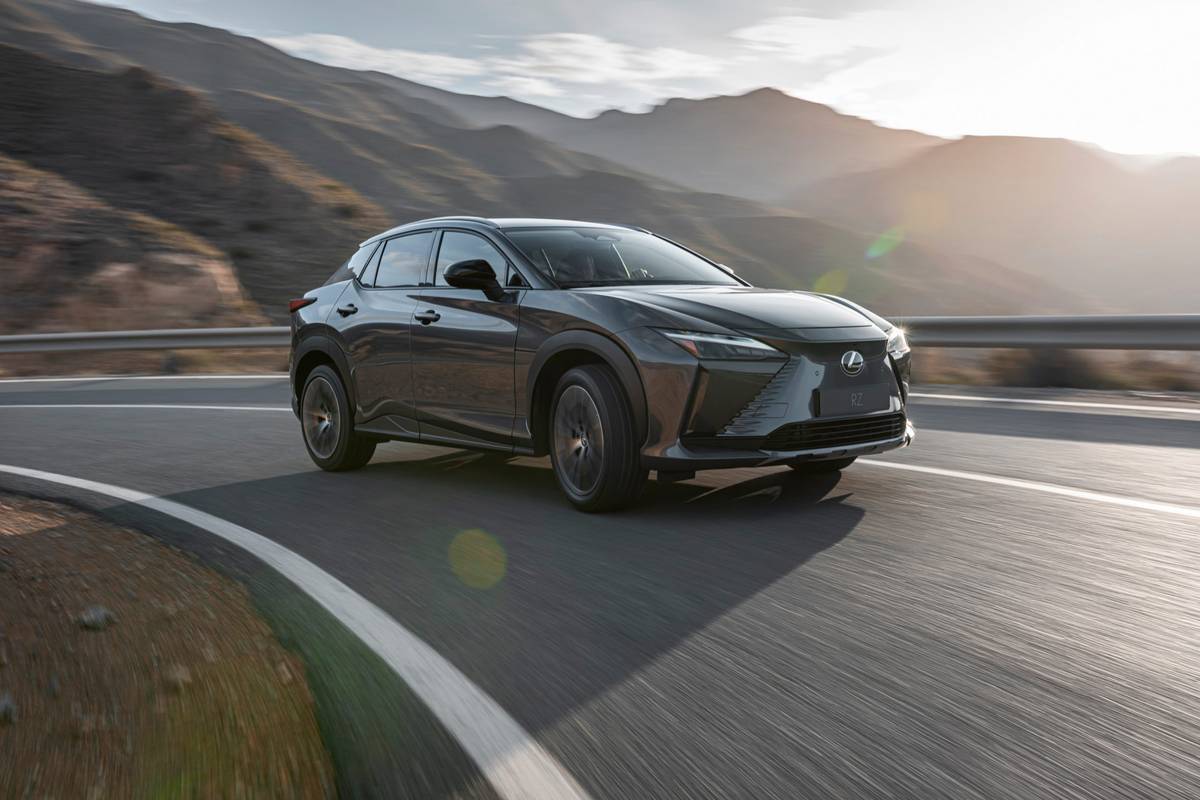 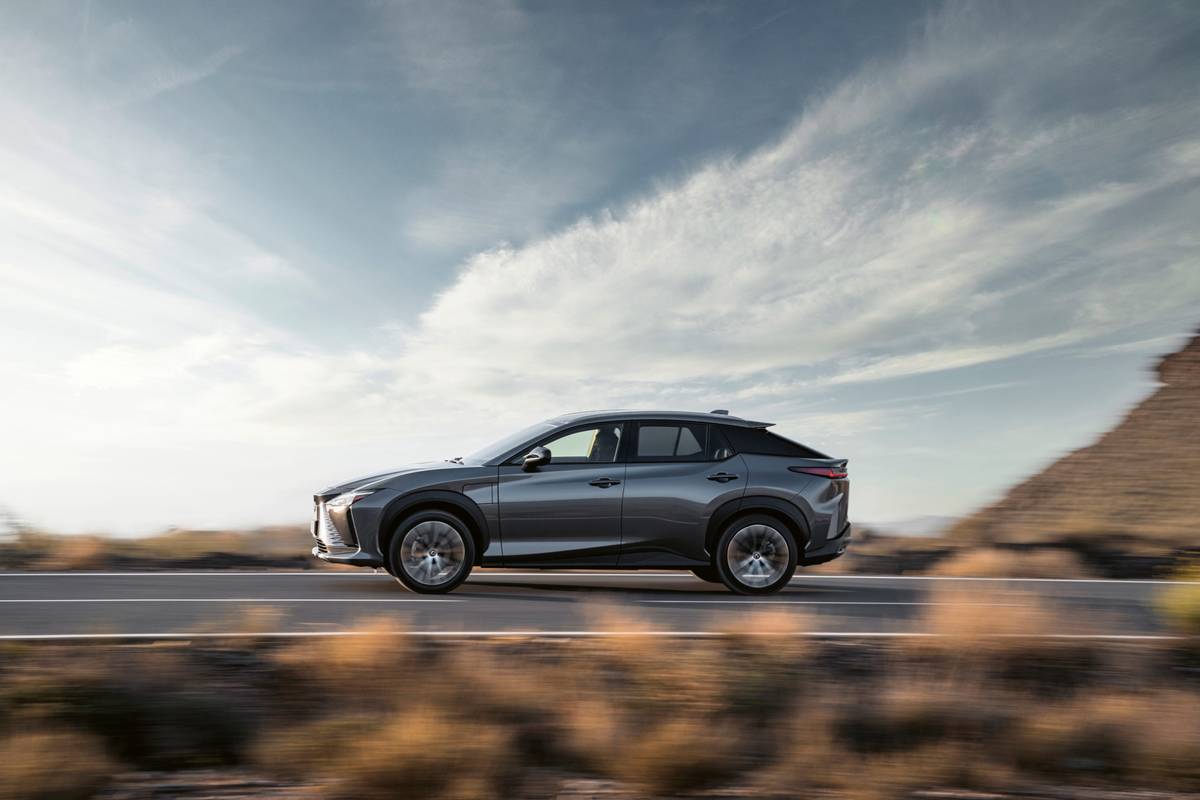 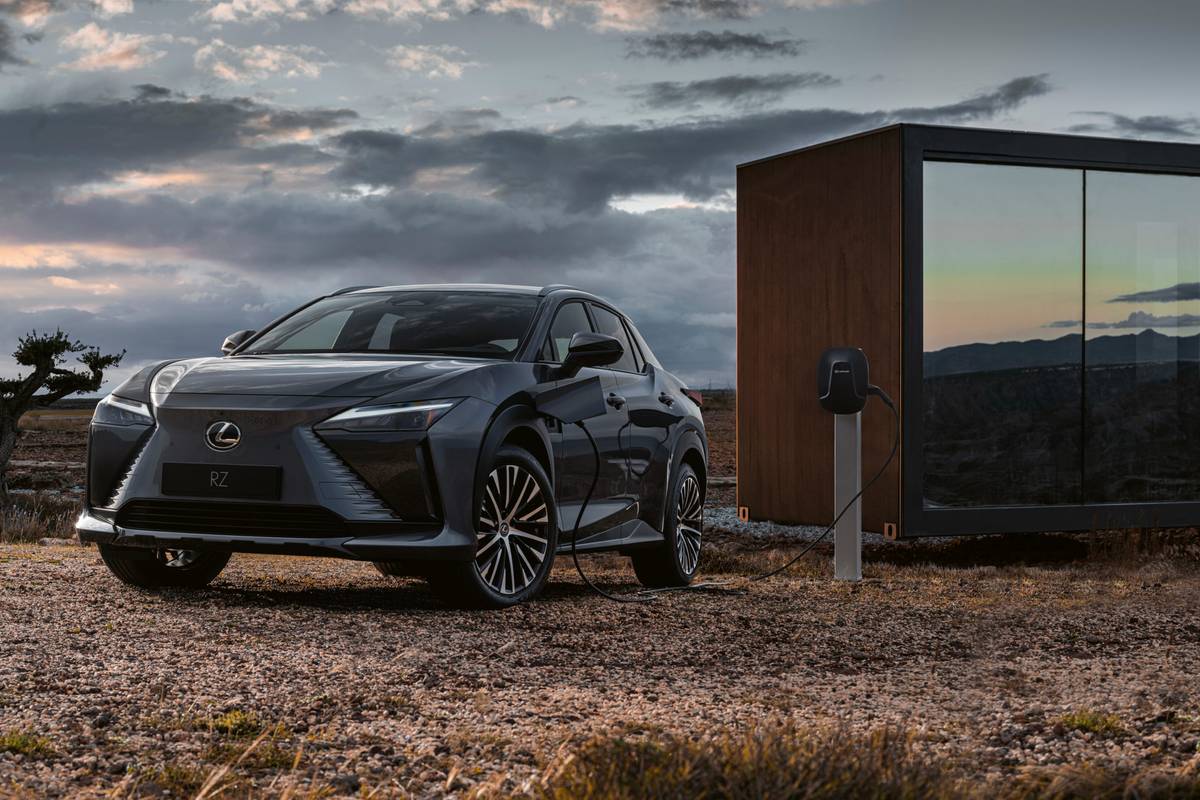 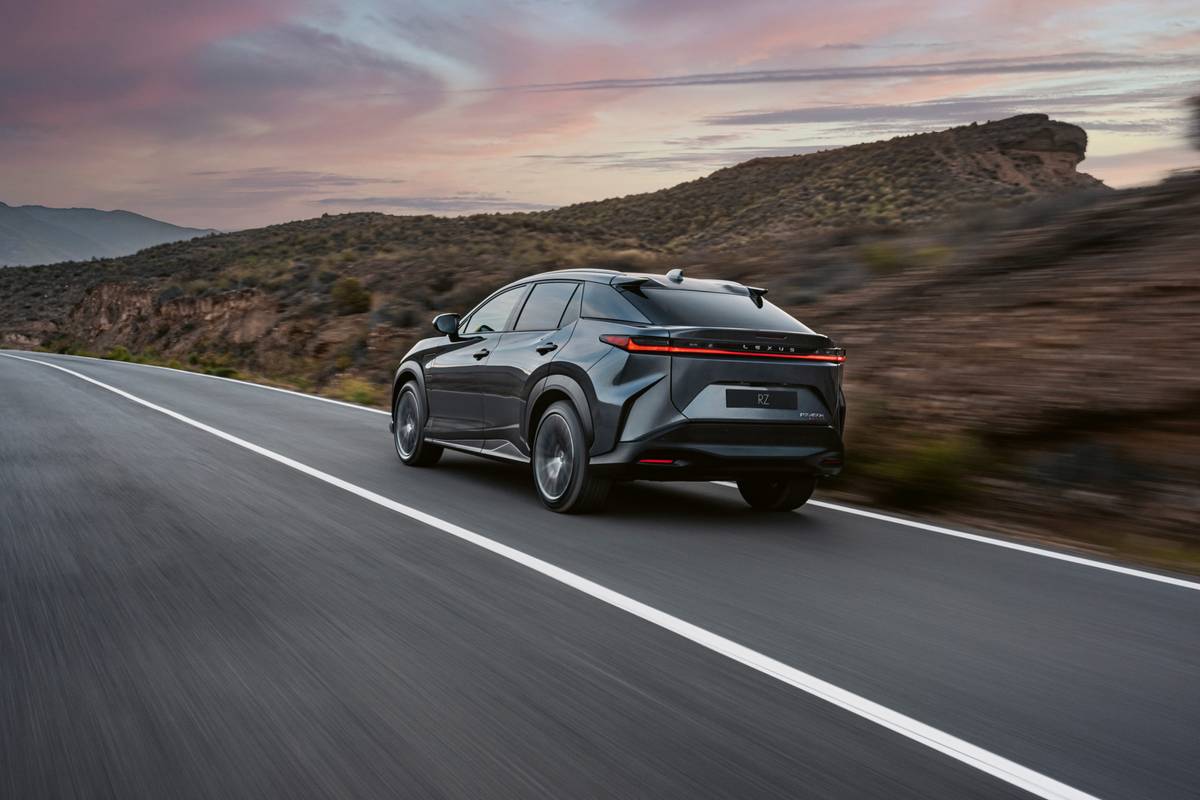 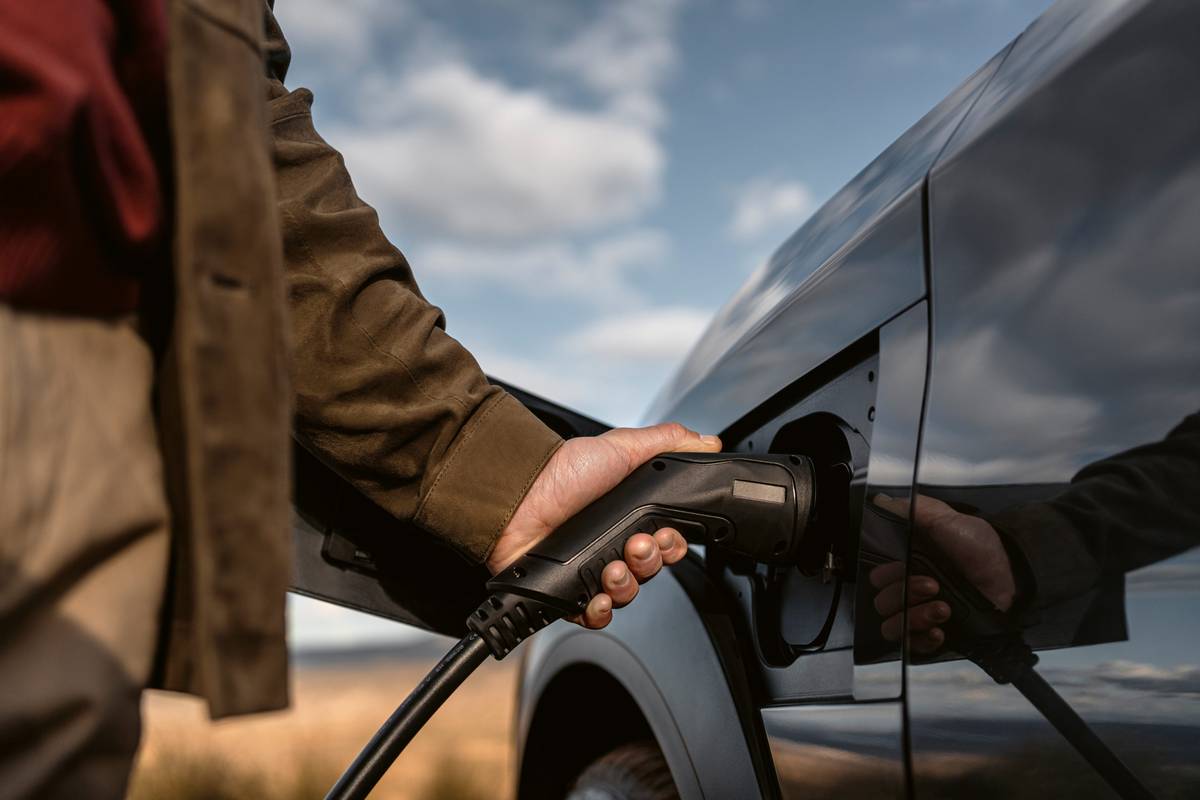 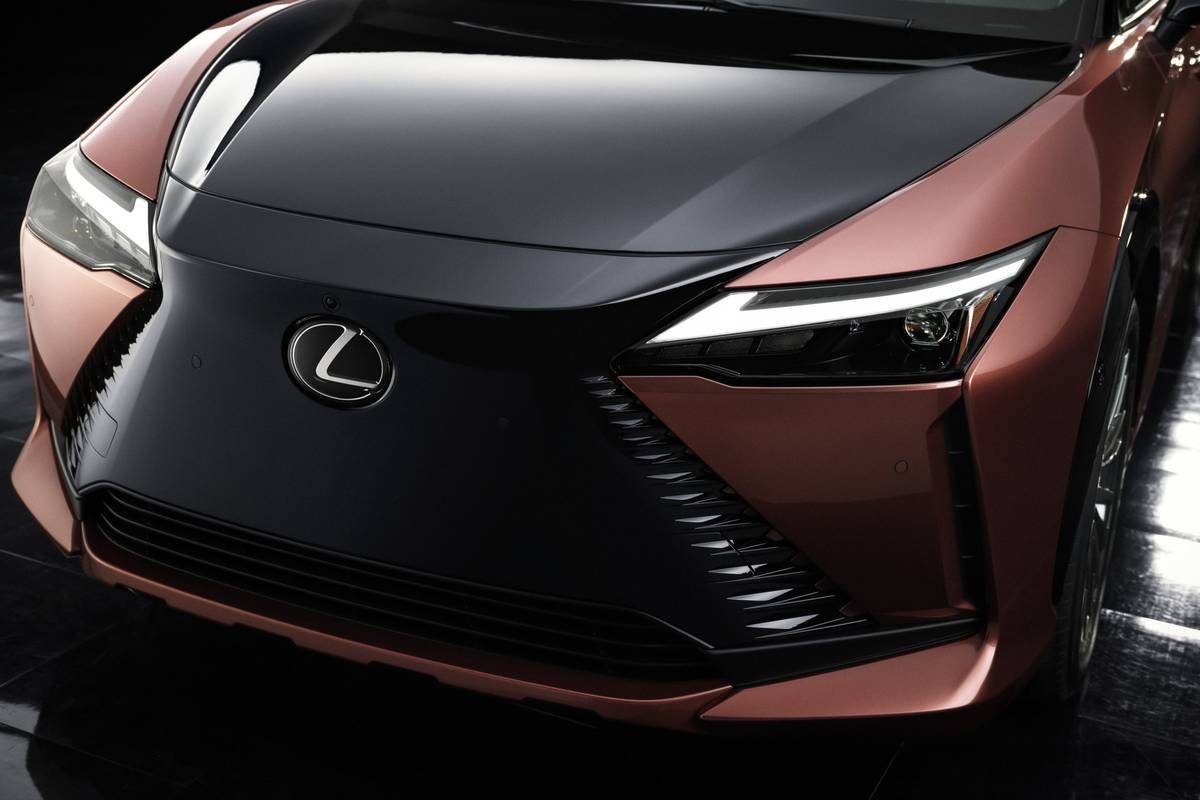 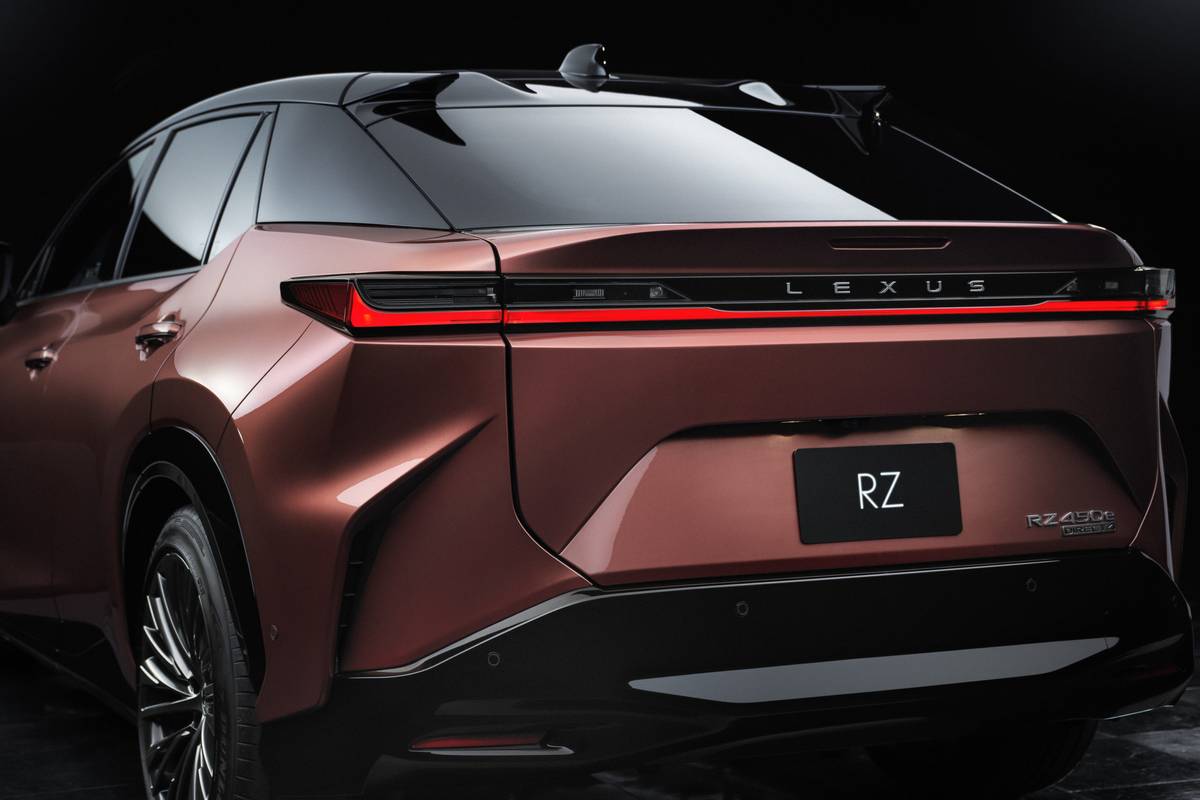 Based on provided dimensions, the Lexus RZ fits between the NX and RX among the brand’s current SUVs. It’s also longer and wider than the Toyota bZ4X, but it shares the same wheelbase with its mass-market cousin. The RZ also sports more conventional styling than the bolder bZ4X.

The RZ’s styling doesn’t stray far from other Lexus SUVs, like the 2022 RX, but there are some distinctions. With no internal-combustion engine under the hood, there’s no functional need for Lexus’ signature spindle grille; instead, the brand applied the spindle motif to the entire body. According to Lexus, the shape of the vehicle’s roof, roof spoiler, ducktail rear and grille opening work together to improve aerodynamic efficiency. The SUV’s rear end houses horizontal combination taillights and the updated Lexus badge first seen on the NX and LX SUVs. 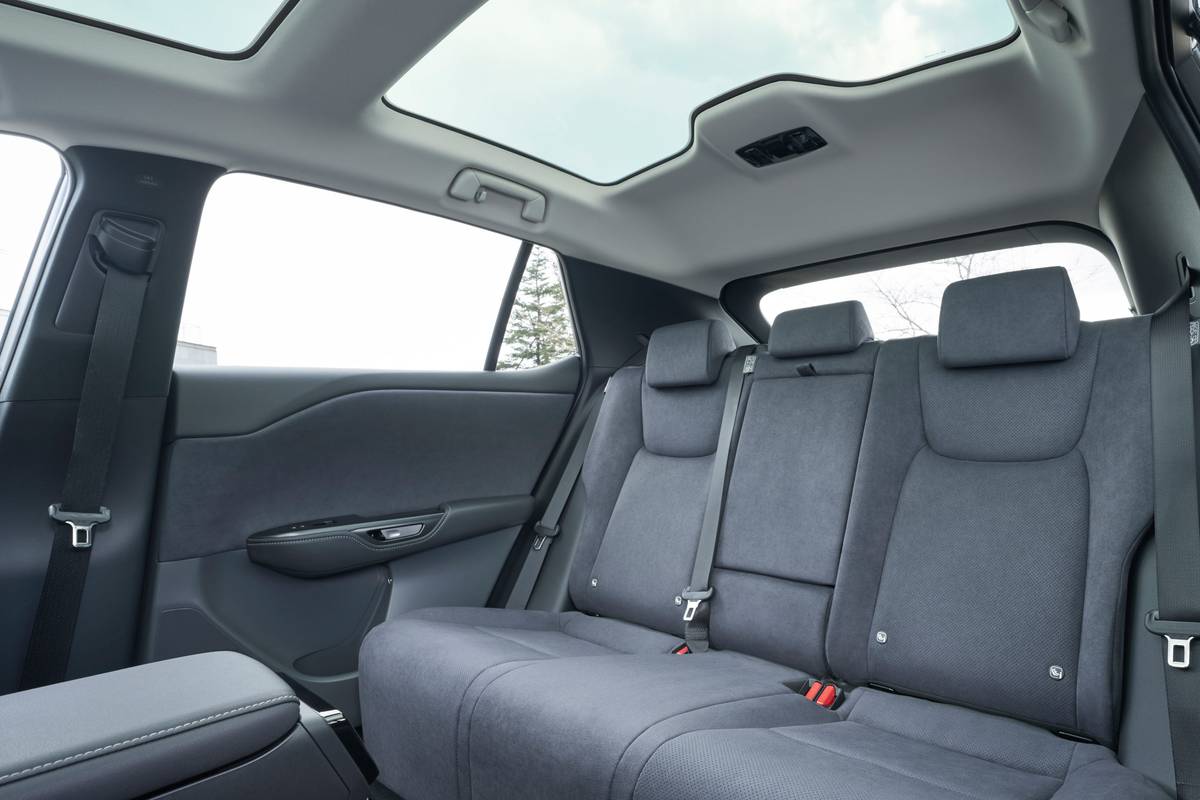 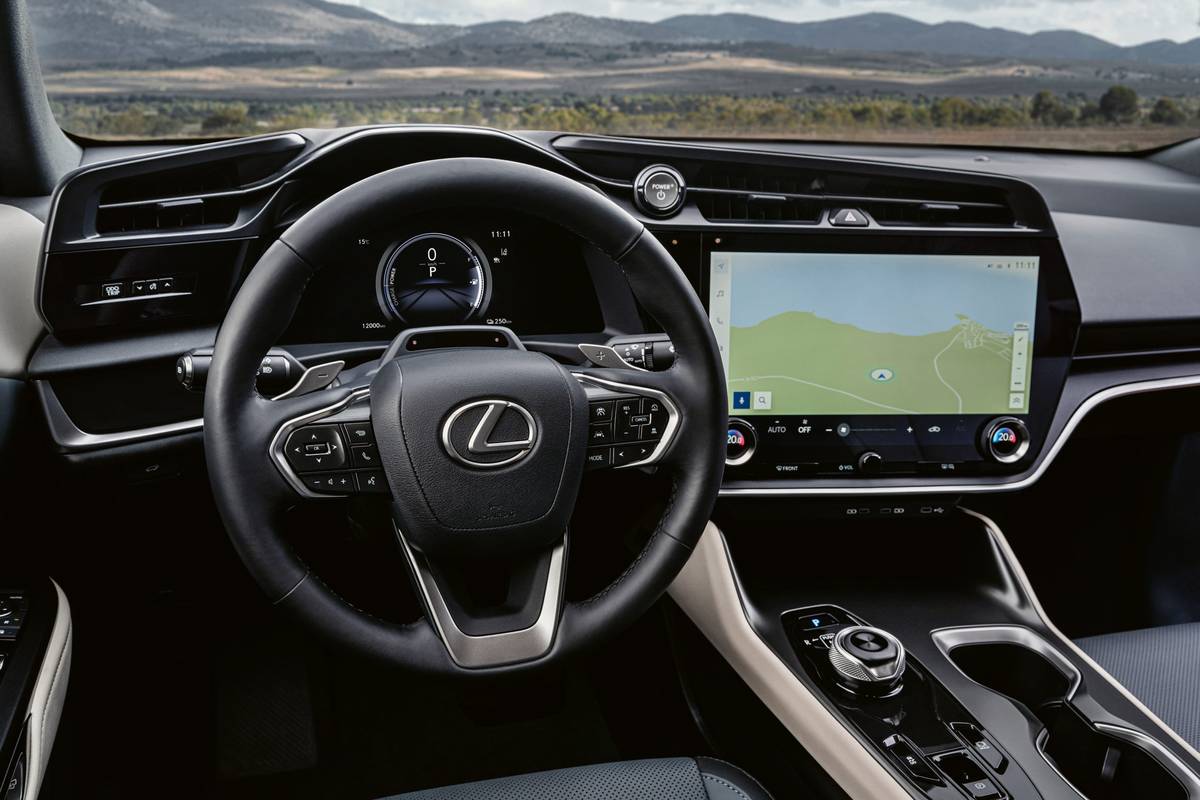 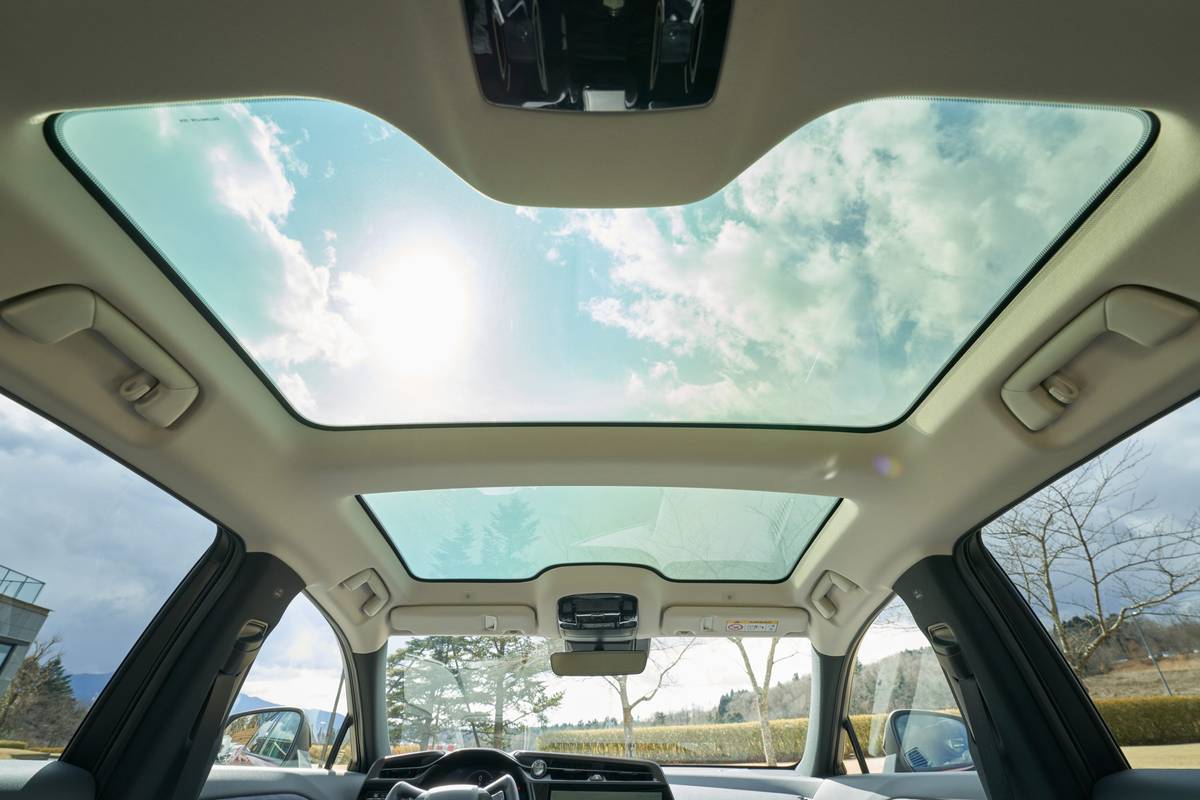 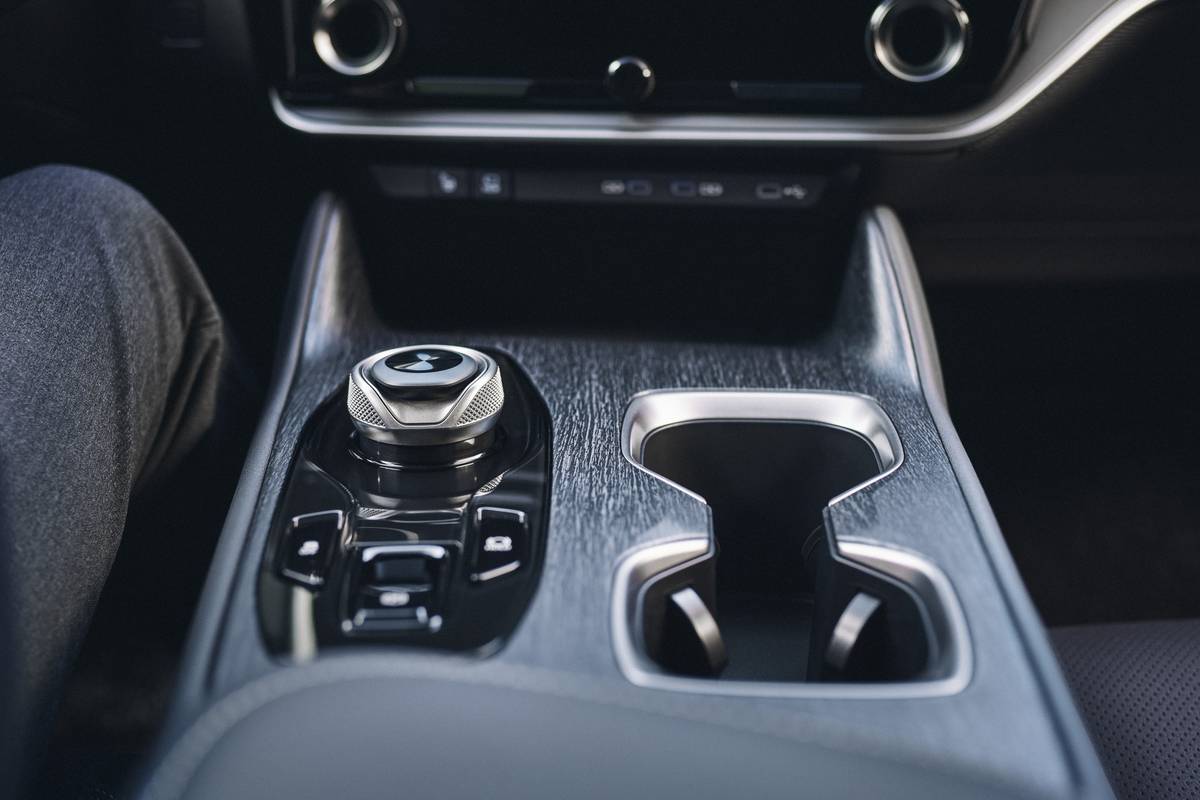 The RZ’s 112.2-inch wheelbase is longer than both the NX and RX and matches the bZ4X, which hints at the vehicle’s interior space. The interior offers a minimalist design that makes for a more open cabin. The second row offers ample legroom and headroom thanks to the shape of the cabin, Lexus says, and a panoramic roof comes standard. Three interior colors will supplement the Ultrasuede upholstery: Orage (not a typo), Palomino and two-tone gray and black.

Photos reveal both a traditional steering wheel and a steering yoke similar to the one used in Tesla’s vehicles. It’s unclear when (or if) the yoke will be an available option for the RZ stateside, but if so, it might coincide with Lexus’ promise of a future steer-by-wire system that uses electrical signals to exchange information between the steering wheel and the tires.

The RZ’s battery pack serves as a sound barrier; acoustic glass and a sealed hood opening also help keep road noise out, Lexus says. Since an EV lacks the sounds that come with a traditional gas engine, the SUV funnels engineered driving noises into the cabin based on driving speed and acceleration.

Range and Performance: What We Know So Far

The RZ features the brand’s Direct4 AWD system, created specifically for its hybrid and pure-electric vehicles. It’ll be powered by dual electric motors and a 71.4-kilowatt-hour battery pack it shares with the front-wheel-drive Toyota bZ4X (interestingly, the AWD-only RZ doesn’t offer the 72.8-kWh battery used in the AWD bZ4X). Lexus has not yet revealed power figures, but the RZ’s Toyota relative makes 214 horsepower and 248 pounds-feet of torque when equipped with AWD.

Lexus estimates that the upcoming RZ will get a range of 225 miles, but the vehicle has not received an official EPA rating. That range is in line with estimates for the AWD bZ4X and Audi E-Tron (the latter officially rated at 222 miles), but it falls short of competitors like the Tesla Model Y Long Range AWD’s EPA-estimated 330-mile range or the AWD extended-range Ford Mustang Mach-E’s 277 miles.

Lexus says the 2023 RZ also will come with a new multimedia system. Recently launched on the NX and LX SUVs, the more intuitive and user-friendly system is controlled through a 14-inch touchscreen or via voice commands. Driver-assist features found on the RZ as part of Lexus’ latest Safety System Plus 3.0 suite include automatic emergency braking with oncoming traffic detection, adaptive cruise control with curve speed management and hands-on lane-centering down to a stop.