CARS.COM — Here’s a fun fact about the seven compact sports sedans we tested in Cars.com’s 2017 Luxury Sports Sedan Challenge: Every engine had 2.0 liters of displacement (the amount of room inside an engine that helps determine how much air and fuel can be crammed together to make power). And let us tell you: Some automakers do a lot more with their soda-bottle-sized engine than others.

The difference of 40 hp between the most- and least-powerful sedan was enough for the fastest to massively gap the slowest (combined with other factors, of course, including traction, weight and gearing). In our previous test of this class, the BMW reigned king.

Does it still have the right stuff? The short answer is no.

The IS 200t has the same horsepower as the Mercedes-Benz and weighs the same (even though it doesn’t have all-wheel drive, so that’s not good), and perhaps because it was down on torque compared with the Benz, the engine felt completely flat and lifeless. There’s no punch or rush of acceleration like the others despite similar specs. To put the IS’ pokiness in perspective, the Alfa Romeo hit 0-60 mph in 5.2 seconds, and when the IS 200t was 5.2 seconds into its fastest acceleration run, the poor car was chugging along at 46 mph, 14 mph slower than the Alfa. That’s a difference you can feel in the seat of your pants.

Despite a favorable power-to-weight ratio on paper, the Jaguar XE 25t moseyed to the finish line second to last, but that wasn’t indicative of its punchiness on the backroads and around town. Sure, it took almost 7 seconds to go 0-60 mph and was more than a half-second slower than the Mercedes in the quarter-mile, but once you get this on the street, it packs a mid-range punch that doesn’t feel like it would be back of the pack in outright acceleration. We tested a 2017 model, but for 2018, the Jaguar receives a new four-cylinder engine and quicker 0-60 mph estimates; Jag estimates 6.5 seconds for a 2017 (which put our test car a little off the pace) and 6 seconds for the 2018.

The Mercedes-Benz C300 4Matic was a few ticks behind the Cadillac and BMW with little to rave about or knock. This Mercedes-Benz C-Class is perfectly pleasant and responsive, but all-wheel drive didn’t give as much of an advantage here as it did for the Audi and Alfa, and it was slower off the line than some of its rear-wheel-drive competitors with similar power. We did observe a chirp from the rear tires at launch before all tires grabbed and scooted the Mercedes off the line, though it didn’t seem to slow the C300. More likely, the C300 was on the heavy side in the class and the low side in the power department.

Without all-wheel drive, the powerful Caddy 2.0T (second-most powerful in the test) needed more discerning use of the accelerator pedal compared with the BMW to leave the line without spinning the rear tires, and that accounts for the slightly slower 0-60 mph time. Still, the Cadillac’s engine was slower to pick up power from a dead stop and made a grainy, unpleasant noise compared with the BMW’s smooth sounds. The results speak for themselves, however, and the butt dynamometer calls it a draw.

No two cars felt closer matched than the BMW 330i and the Cadillac ATS, which posted near-identical acceleration times. This BMW 3 Series edged out the Cadillac in the 0-60 mph test by a tenth of a second (6.1 seconds to 6.2 seconds), and they crossed the quarter-mile in the same 14.3 seconds, though the BMW gets the edge in points with that fraction-of-a-second win in 60 mph. Truth is, it’s nearly impossible to tell the difference from behind the wheel. While this BMW 3 Series didn’t get any extra bonus points for its sound, the smooth, refined BMW engine sound was a big differentiator from the noisy Cadillac.

Hot on the heels of the Giulia was the A4 2.0T Quattro, with 0-60 mph in 5.4 seconds and the quarter-mile in 13.9 seconds at 99.1 mph. The Audi was quick off the line with swift turboc boost response and eager clutch engagement from the seven-speed dual-clutch automatic transmission. Using launch control dumped the automatic’s clutch with the engine revving at 3,000 rpm and cracked off the A4’s fastest times. The Audi’s crisp, fast shifts were second to none. The difference between the Audi and Alfa isn’t great at low speeds and only differs at higher speeds where the Audi loses steam and the Alfa keeps on keepin’ on at the top end.

At the top of the heap is the 2017 Alfa Romeo Giulia Ti with 280 hp from its turbo 2.0-liter four-cylinder making the most horsepower and torque in this test. It showed: The Giulia was the raciest of the bunch, with top times hitting 0-60 mph in 5.2 seconds and the quarter-mile in 13.7 seconds at 100.1 mph. With optional all-wheel drive, the Alfa pins you to the seat fiercer than any competitor after building up engine speed against the brakes at the starting line. The Alfa’s prodigious power could easily be mistaken for a six-cylinder — and a potent one at that.

Tires are an important factor in braking performance, and we didn’t have an equal playing field. The Alfa Romeo and Lexus IS wore summer tires, the BMW came with winter tires (we’re still scratching our heads on that one), while the Mercedes-Benz’s tires had only about 150 miles on them, and tires are sometimes a little greasy until they’ve broken in about 400-500 miles. Our braking test measures panic-braking performance from 60 mph.

The Alfa Romeo embarrassed the others in our braking tests, stopping from 60 mph in a short 119.4 feet. It’s a no-drama experience without tire squealing or excessive antilock braking system intervention. Plant the brake pedal and the Giulia’s nose quickly settles before the force of deceleration tries to evacuate eyeballs from your skull. The Alfa stops with the confidence of a much more expensive performance package such as a BMW M4 or Cadillac ATS-V.

Stopping next shortest was the XE at 126.7 feet, which feels good under braking with controlled body motion and a crisp brake pedal. The as-tested Cadillac had optional slotted brake rotors and upgraded brake pads as well as only the front calipers painted red, which is a little weird. Not many automakers publish braking numbers for these cars, but Cadillac says the ATS should stop from 60 mph in 129 feet, and our as-tested ATS did the job in 128.2 feet. The Lexus and Audi stopped decently mid-pack, but the poor-performing BMW and Mercedes stood out. Winter tires and 90-degree testing days don’t mix well, and the BMW squirmed to a stop. The Mercedes felt like it was trying to stop on ice with its fresh tires, skipping along the surface as the ABS wildly tried to whoa the car down.

How We Conducted the Tests

We used a Racelogic Vbox II GPS data logger to record acceleration and braking performance at Atlanta Dragway in Commerce, Ga. Quarter-mile acceleration numbers mirrored how a drag strip calculates quarter-mile times, including the 1-foot rollout method accounting for the distance a front wheel moves in the timing beam before rolling out of the beam and triggering the timing system, which is typically a few tenths of a second faster than not including rollout. Zero-to-60-mph times were raw times from a standstill and did not include a 1-foot rollout. All braking tests were performed on a typical asphalt surface by accelerating up to a steady 60 mph and simulating a panic stop. 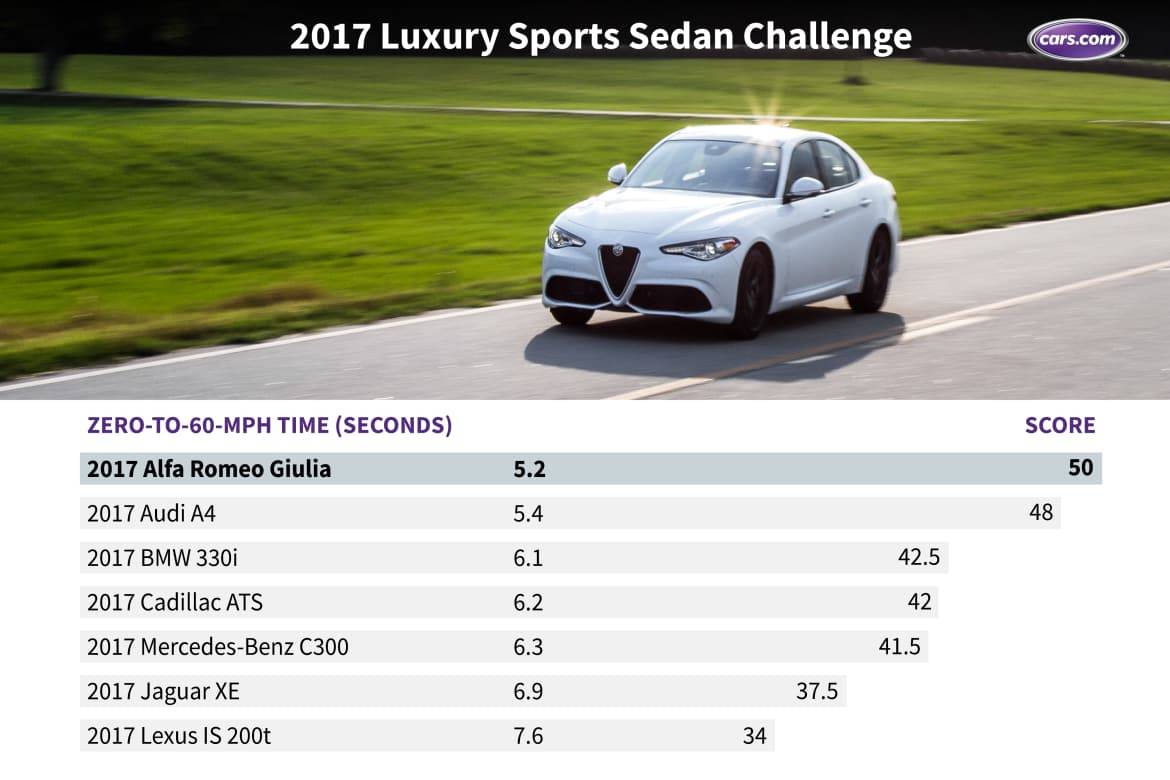 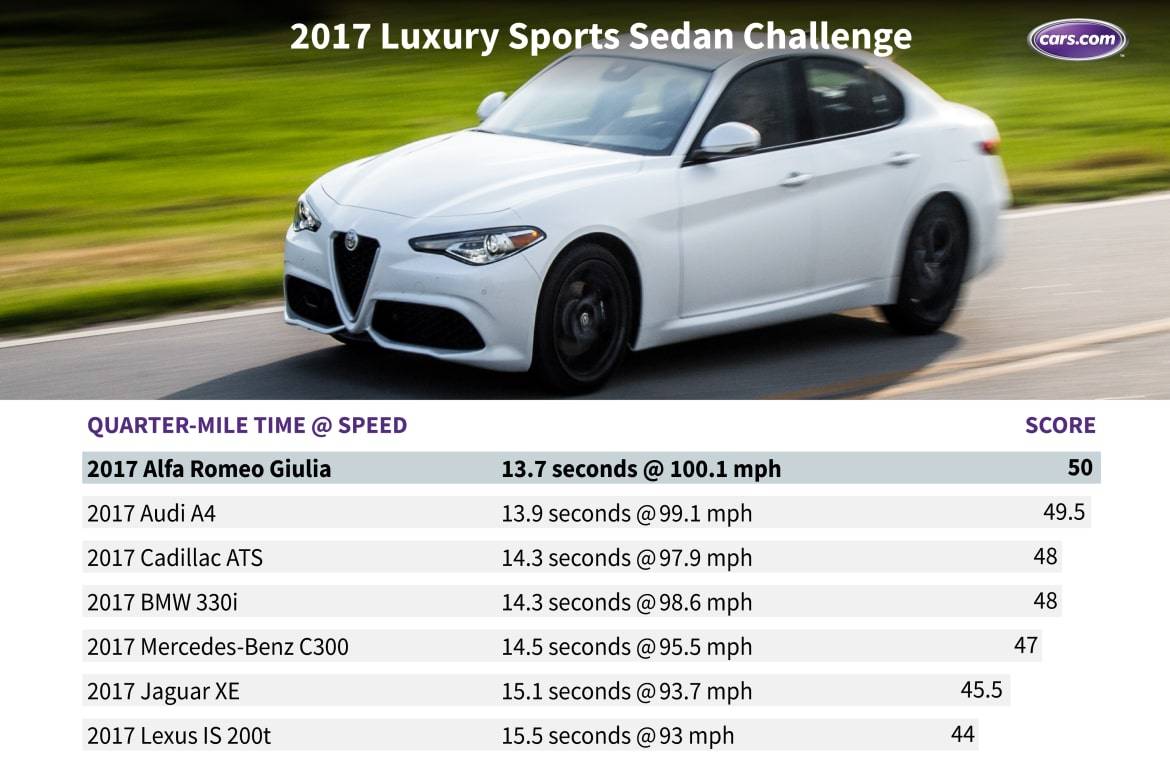 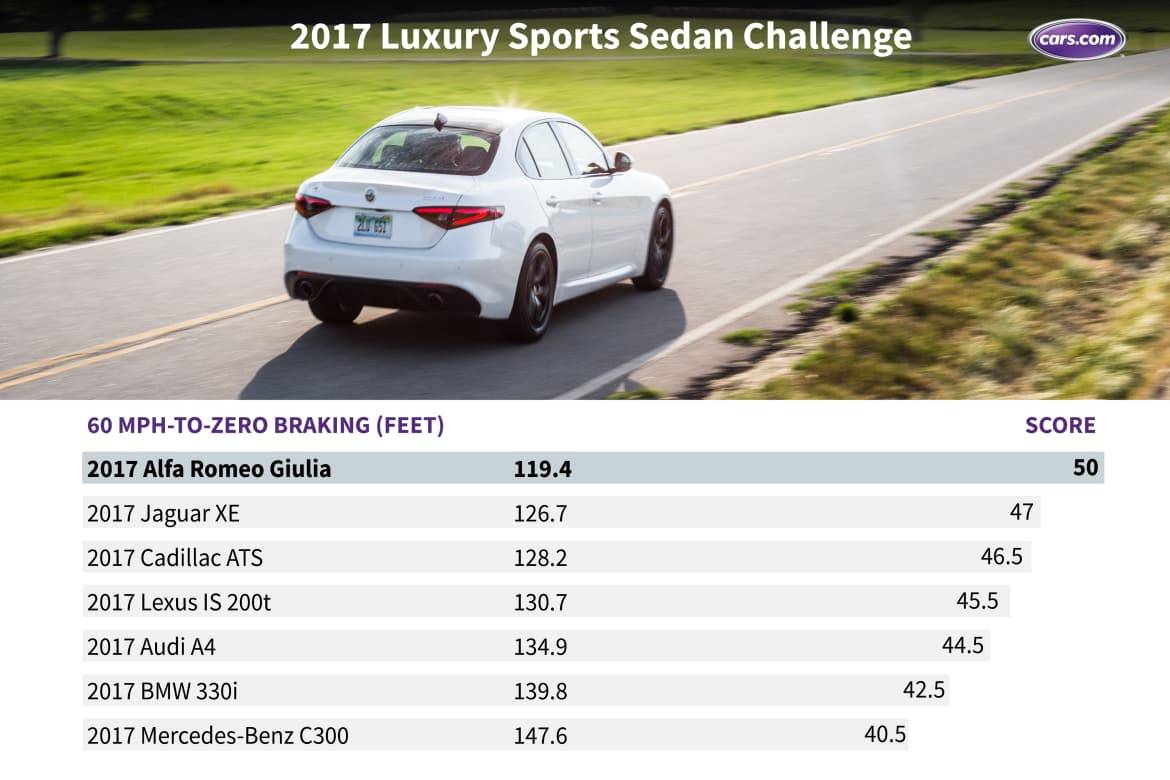