Looks like: The sensuous LC coupe made even more tantalizing with a dropped top — while still lookin’ good with the convertible top up

Just in time for top-down weather next year, the sleek and sexy Lexus LC 500 coupe will have an 2021 LC 500 Convertible stablemate. The droptop version will have its production debut at the 2019 Los Angeles Auto Showand go on sale in summer 2020.

We’ve seen it coming for a while. The LC Convertible was unveiled as a near-production concept in January at the 2019 North American International Auto Show in Detroit and shown in prototype form over the summer at the Goodwood Festival of Speed in the U.K. The production version — which doesn’t appear to dilute the concept at all, and a special edition even carries over the white leather interior — will arrive at a price still to be announced, though breaking six figures would be no surprise. The 2020 LC 500 coupe starts at $93,975 and the LC 500h hybrid coupe at $98,485 (prices include a $1,025 destination charge).

At the L.A. show, Lexus will display a limited-run LC 500 Inspiration Series version of the convertible. It will build 100 copies of the special edition that has Structural Blue paint, a white semi-aniline leather interior, a special blue top available only on this edition, some gray exterior trim, and chrome-and-black 21-inch wheels. 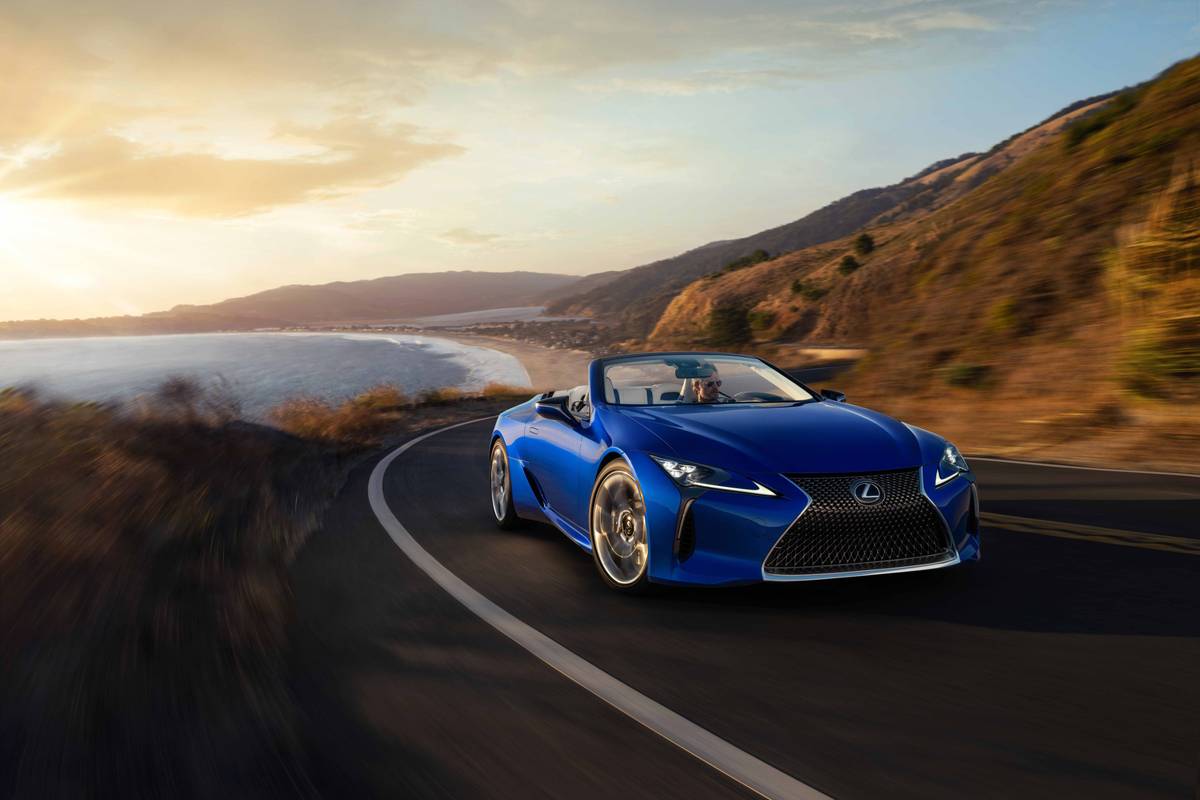 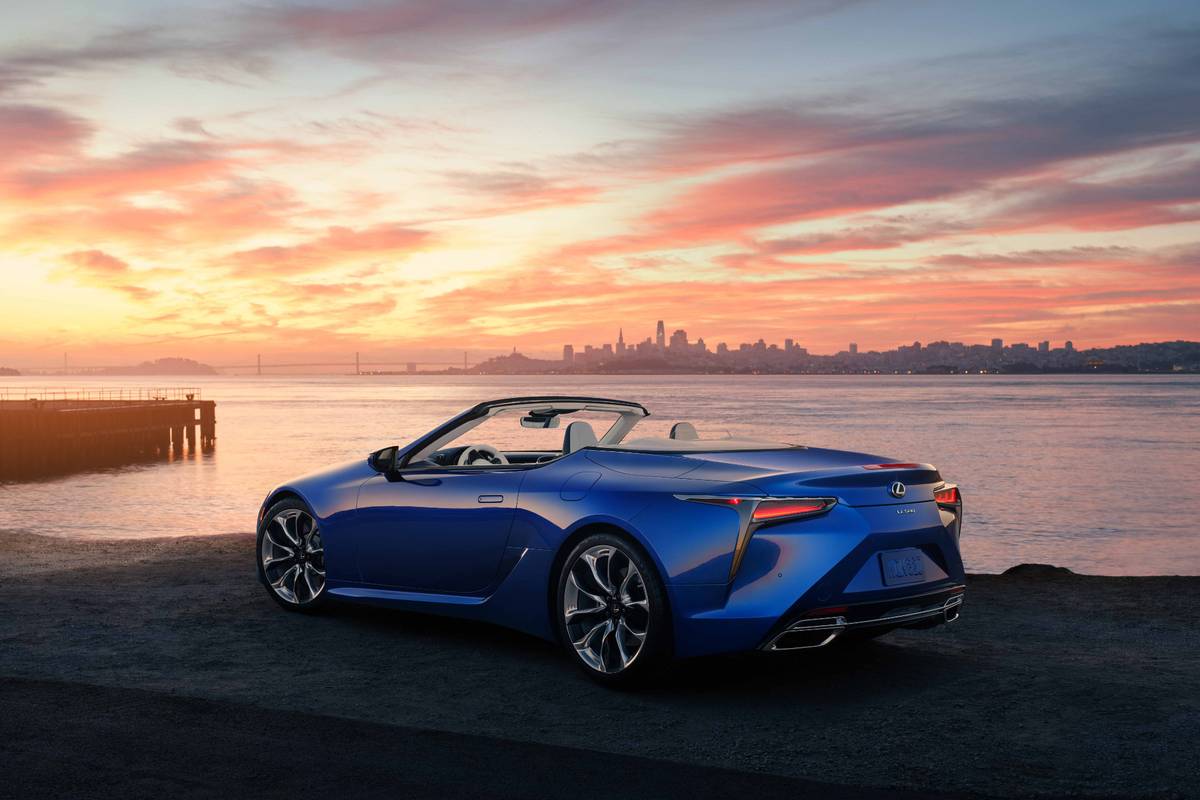 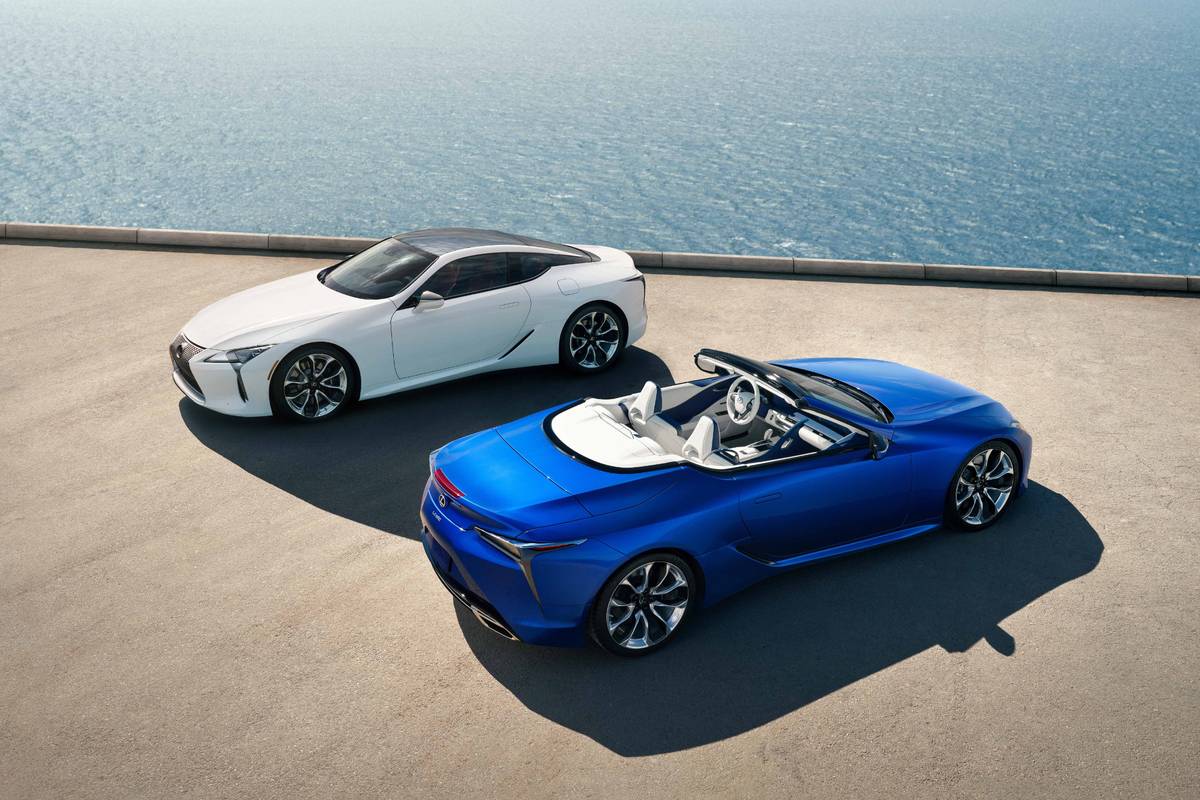 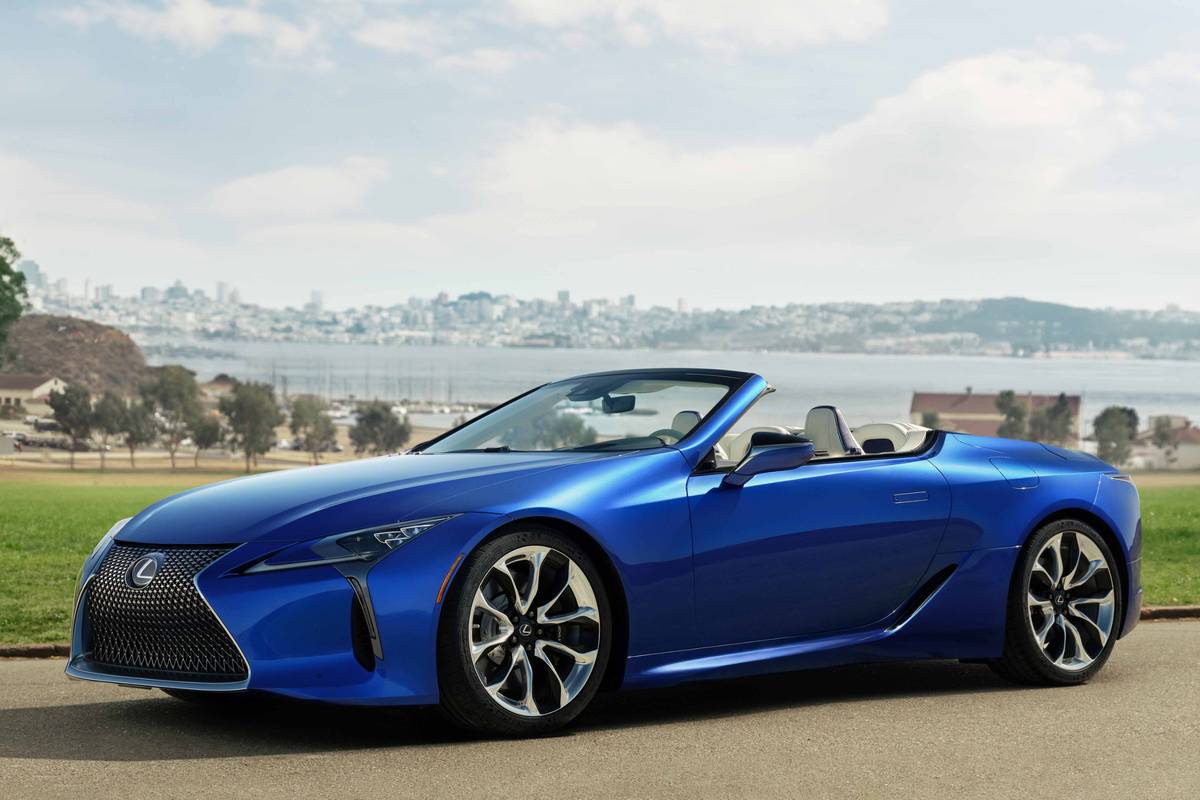 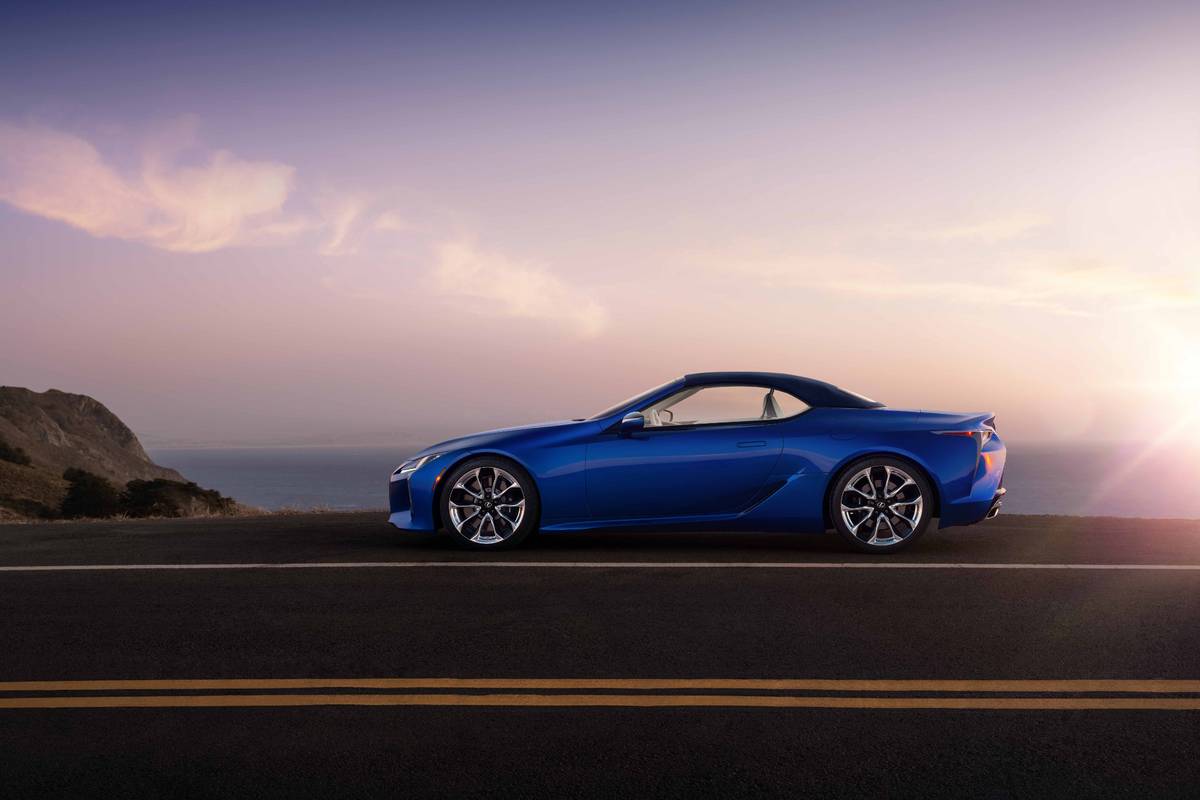 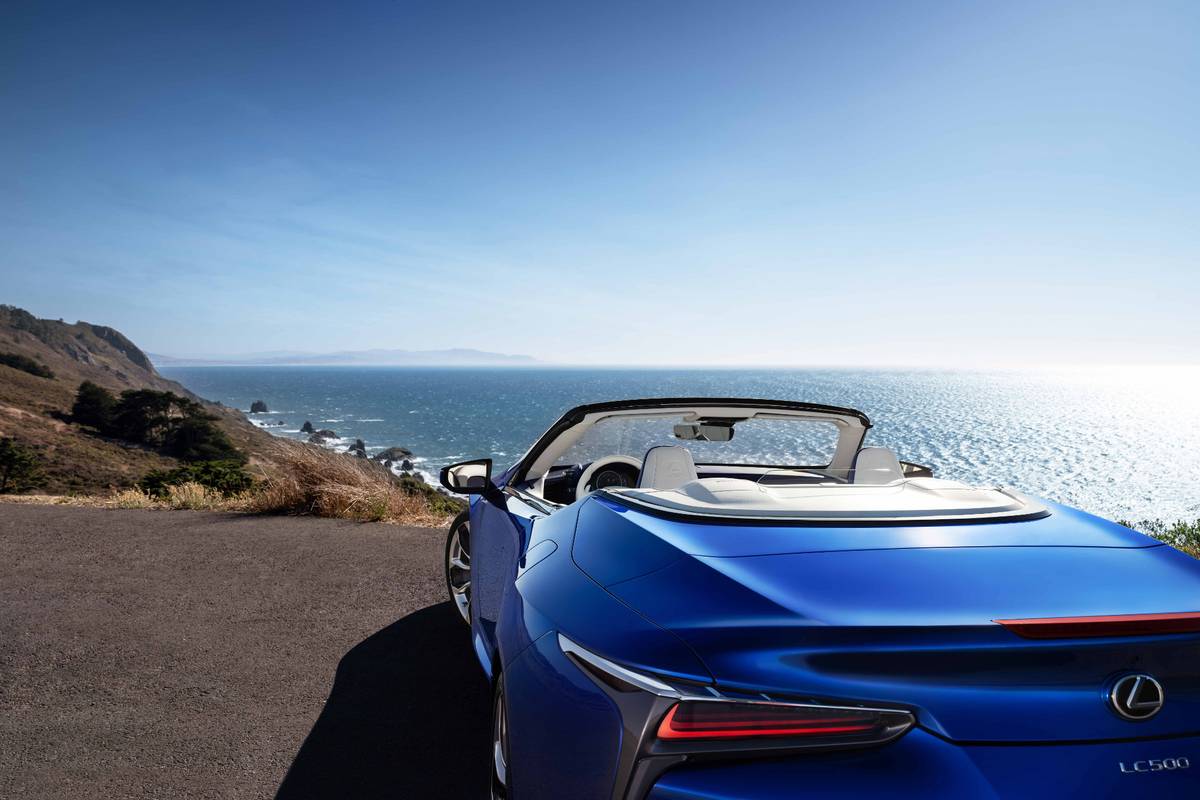 1/7
2021 Lexus LC 500 Convertible | Manufacturer image
Don’t miss out on the latest news, reviews and videos from our in-house experts. Get updates in your inbox.

It’s all about the top, or lack of it. The convertible retains most of what makes the coupe a looker from all sides. And it ducks what could have been a bulk-and-weight penalty from a folding metal top by going with a sleek four-ply fabric top that is offered in black or beige for the regular models; Lexus says the soft top helps preserve trunk space. The top can be opened or closed at up to 31 mph, and it goes up in 16 seconds and down in 15.

Lexus says the top was specifically designed to disguise the supporting frame and have a sleek profile. A hard tonneau cover hides the top when it’s down and is shaped to blend into the lines. The convertible’s high trunk lid kicks up at the rear into a wide integrated spoiler. 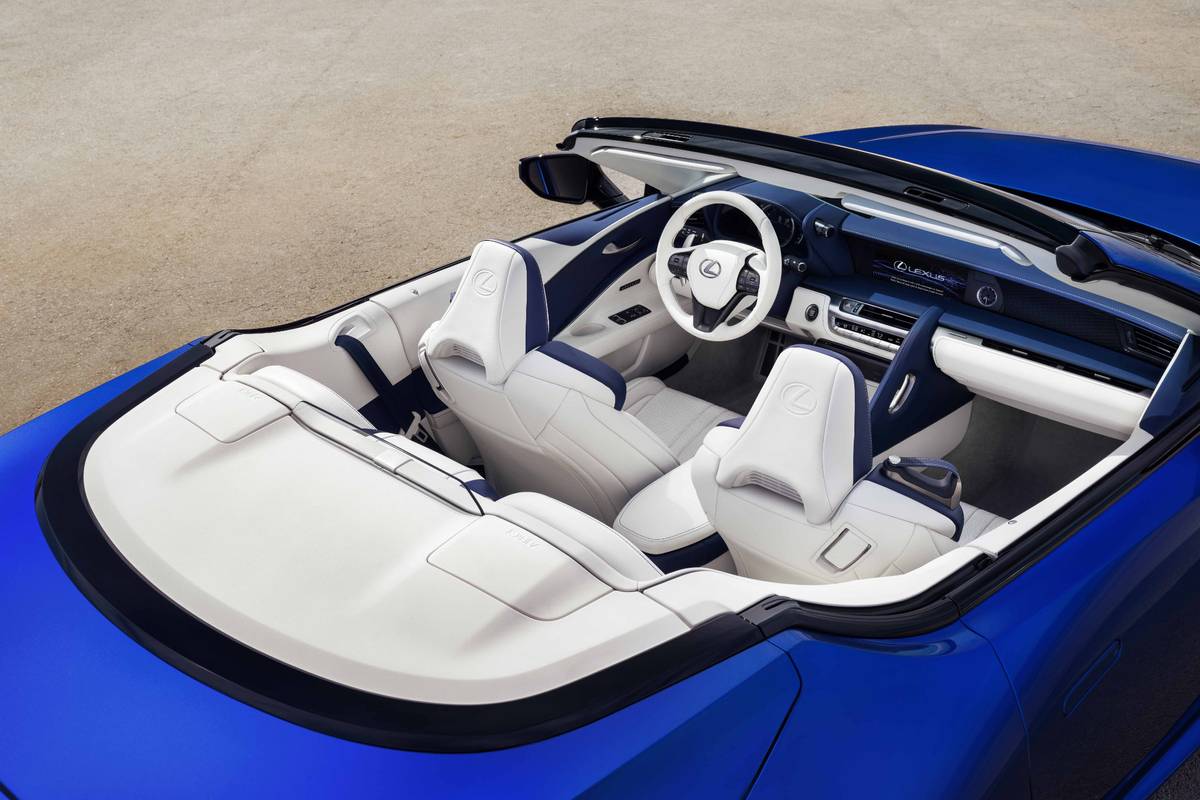 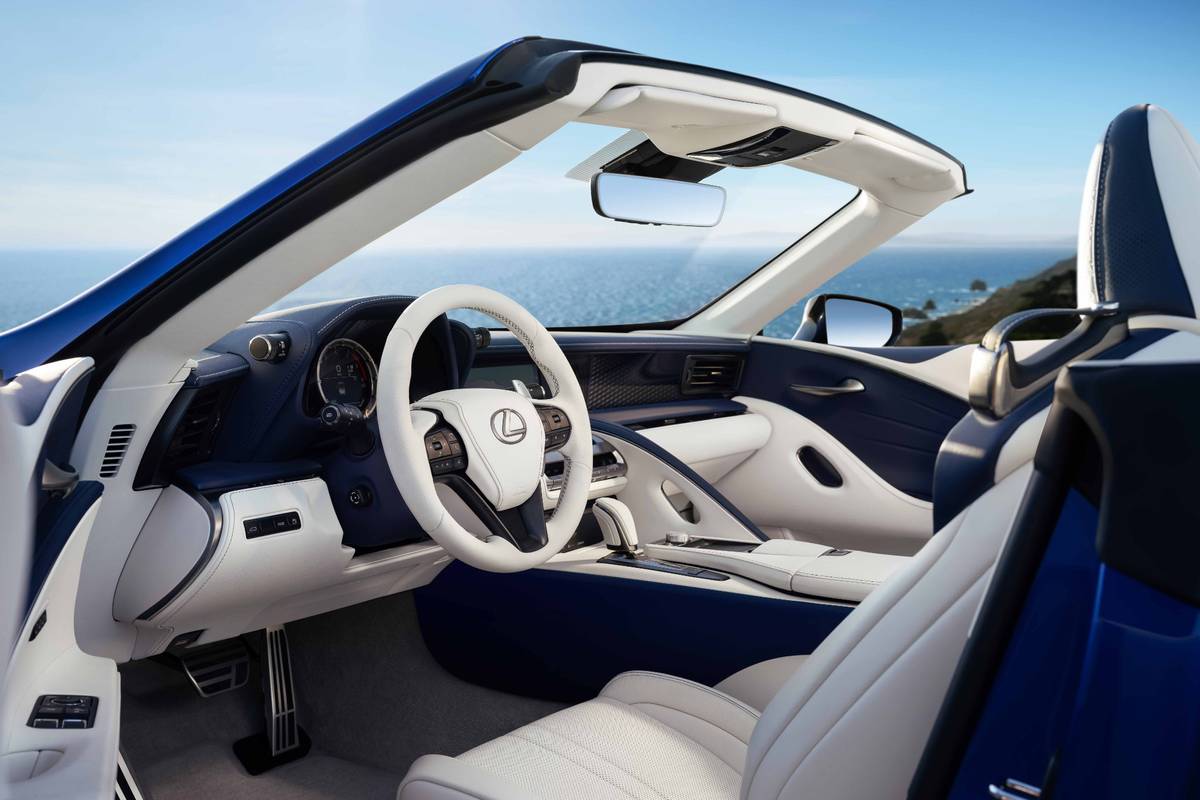 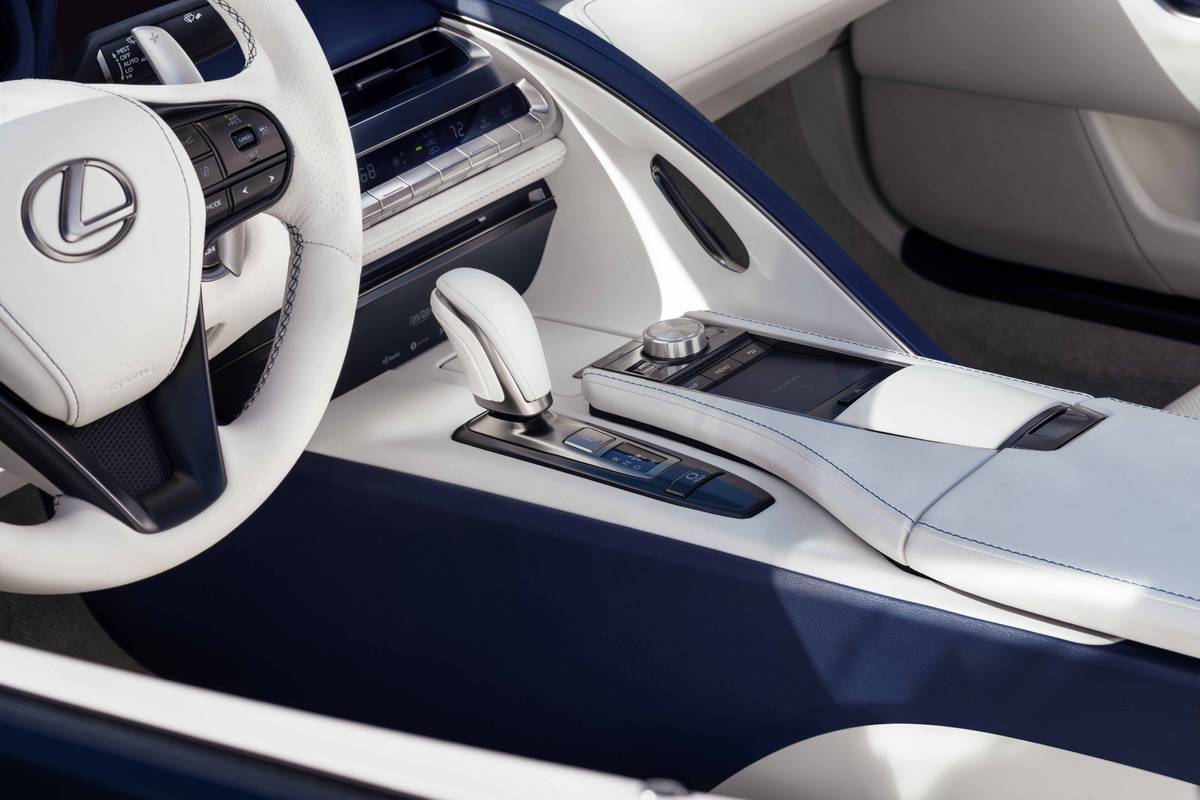 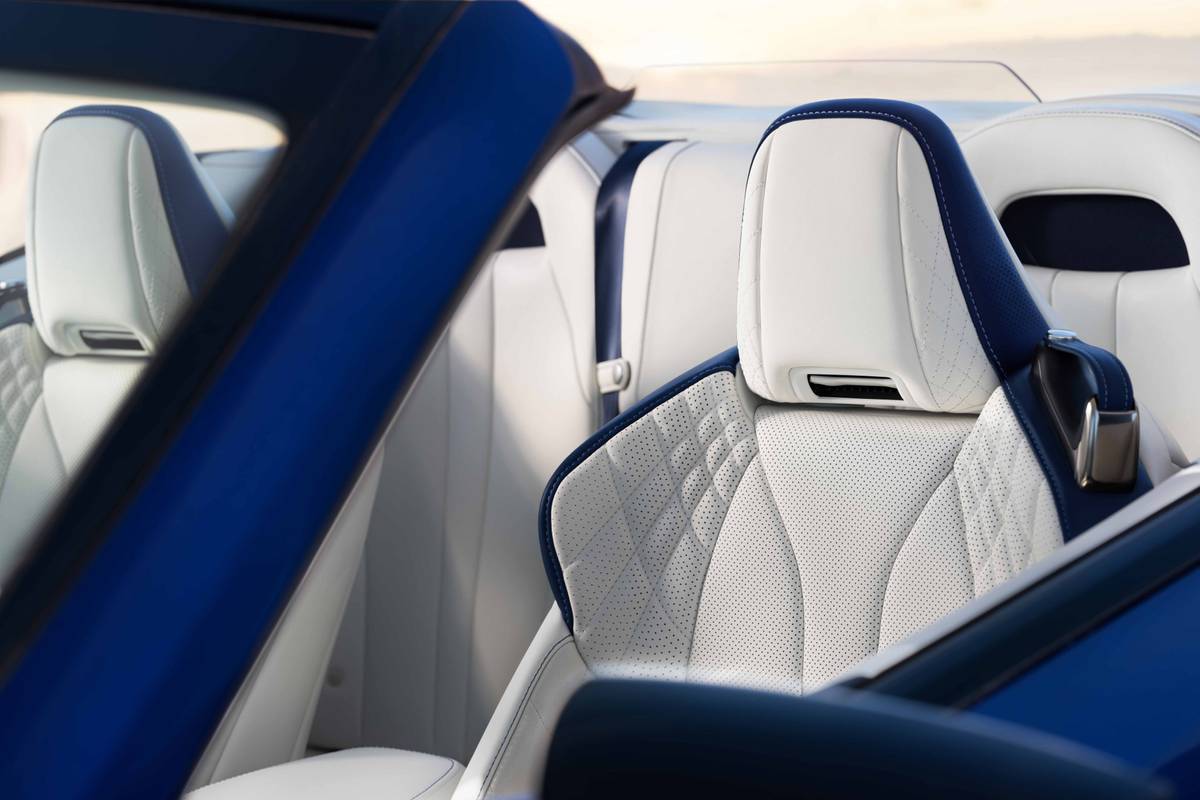 A signature feature of the convertible’s interior is a climate-control system designed to extend the top-down season. The automatic climate system adjusts temperature whether the top is up or down — and when it’s down, the system uses the convertible’s special neck heaters in addition to the seat and steering-wheel heaters to keep you comfortable. The system also has been designed to direct warm (or cool) air to the driver’s hands as needed.

A clear plastic wind deflector behind the rear seat helps control buffeting when the top is down, and there is active noise-canceling technology — but not for the sounds coming from the V-8, which are piped into the cabin for you to enjoy.

Beyond the special-edition white, regular colors for the interior are black, red and Toasted Caramel tan. As in the coupe, the interior has a 10.3-inch multimedia display, and it appears to have the same touchpad control system, which has not been our favorite. Android Auto, Apple CarPlay and Amazon Alexa compatibility are standard. Lexus says using a soft top also helps retain interior space, though the coupe already is effectively a comfortable two-seater with a nearly unusable backseat (or, more accurately, a nicely trimmed and padded package shelf).

The powertrain carries over from the LC coupe, with a 471-horsepower, naturally aspirated 5.0-liter V-8 mated to a 10-speed automatic transmission sending power to the rear wheels. No immediate mention was made of a companion hybrid version of the convertible as there is for the coupe.

Lexus says engineers aimed to retain the coupe’s handling dynamics while adding and moving structural braces for chassis rigidity. They also used lighter materials for some components to minimize weight gain. The convertible is a heavyweight, though, with the extra gear and bracing pushing the weight to 4,497 pounds compared with the already hefty 4,280 for the coupe. The droptop is even a hair heavier than the 4,435-pound LC 500h hybrid coupe.

But the most important safety feature specific to the LC Convertible is an active roll bar system using bars that are hidden to retain the silhouette but pop up for protection when a rollover is detected.