We don’t always evaluate car audio systems, but we’ve made a habit of doing so with our top-award-winning vehicles, which we purchase and test for a year to see how they live up to their original promise. Some of those systems have been pretty good and one was exceptional, but none has involved a mystery like the premium Bang & Olufsen audio system in our Best of 2021 award-winning Ford F-150 Limited. The mystery was where the deep, well-controlled bass could be coming from in a pickup truck with what appeared to be a wide-open cab.

As the staff fossil and a veteran of the late Car Stereo Review magazine, among others, I’ve been explaining in these evaluations how sound systems in SUVs and hatchbacks struggle to produce extended (deep) bass. The reason is that deep bass frequencies generally require a combination of a large woofer (or woofers) and a sizable enclosure to do so, and automakers don’t want to give up much interior space to accomplish this. Instead, they steal whatever space they can with custom-molded subwoofer modules that usually nest in spare tires or the side walls of cargo areas, and these provisions do from very little to a surprisingly good job — for what they are.

The problem is that they seldom provide enough volume (i.e., interior enclosure volume, not audio “volume”) to deliver deep sub-bass. They’re also typically made of injection-molded plastic, which is light and formable (thumbs up from weight-conscious automakers), but not very rigid (the last thing a respectable speaker designer would choose). What was always frustrating about this is that, by contrast, sedan and coupe manufacturers (or owners) could exploit one of the few examples of “free bass” by mounting a modest woofer or two in the car’s rear deck — a configuration that turns the whole trunk into a giant speaker enclosure and provides bass extension that puts the average SUV to shame.

At this point, you may be fuming at me that the F-150 isn’t a hatchback or SUV, but it’s close in audio terms because it lacks the all-important trunk. Pickup trucks like our Limited SuperCrew are roomier than ever, but they’re trying to maintain their capacity to work, so the same manufacturing restrictions apply here as in hatchbacks: The less added bulk, the better. The previous-generation F-150 offered a B&O Play system with a plastic subwoofer enclosure nicely hidden behind the rear seats that did a decent job, but it wasn’t — couldn’t be — big enough to deliver the goods. 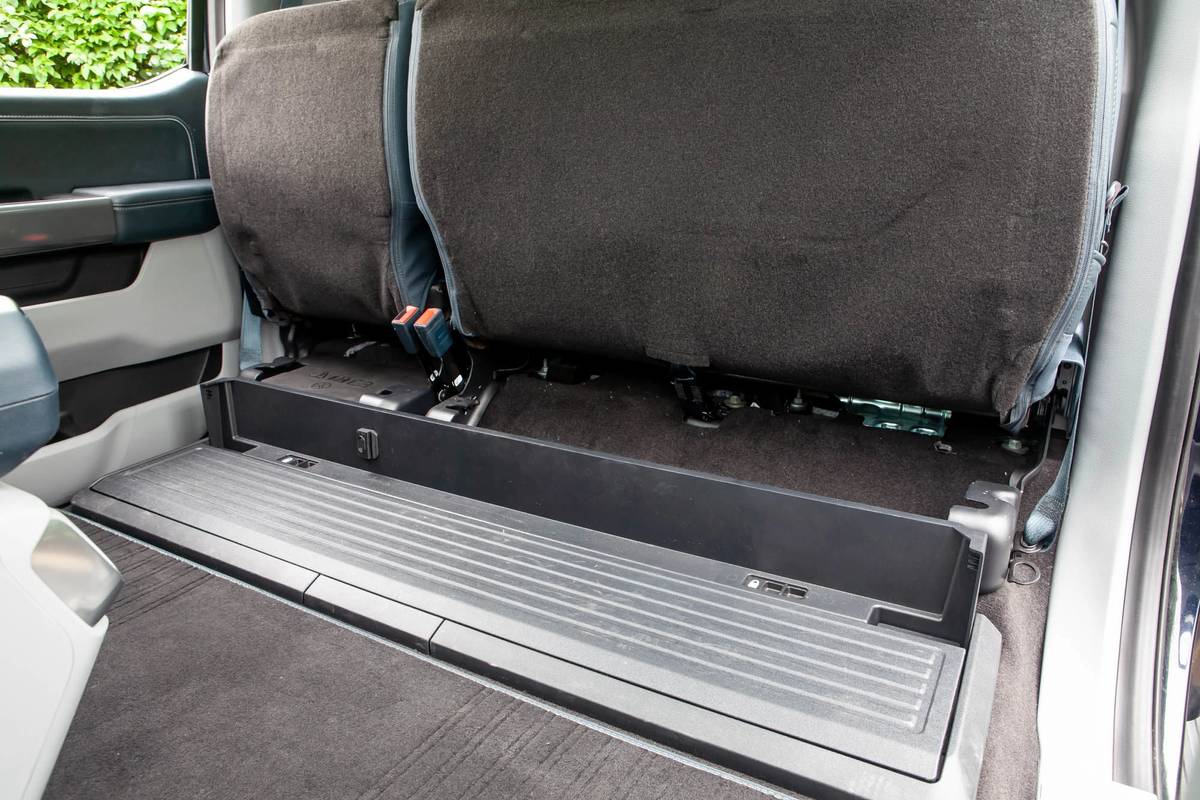 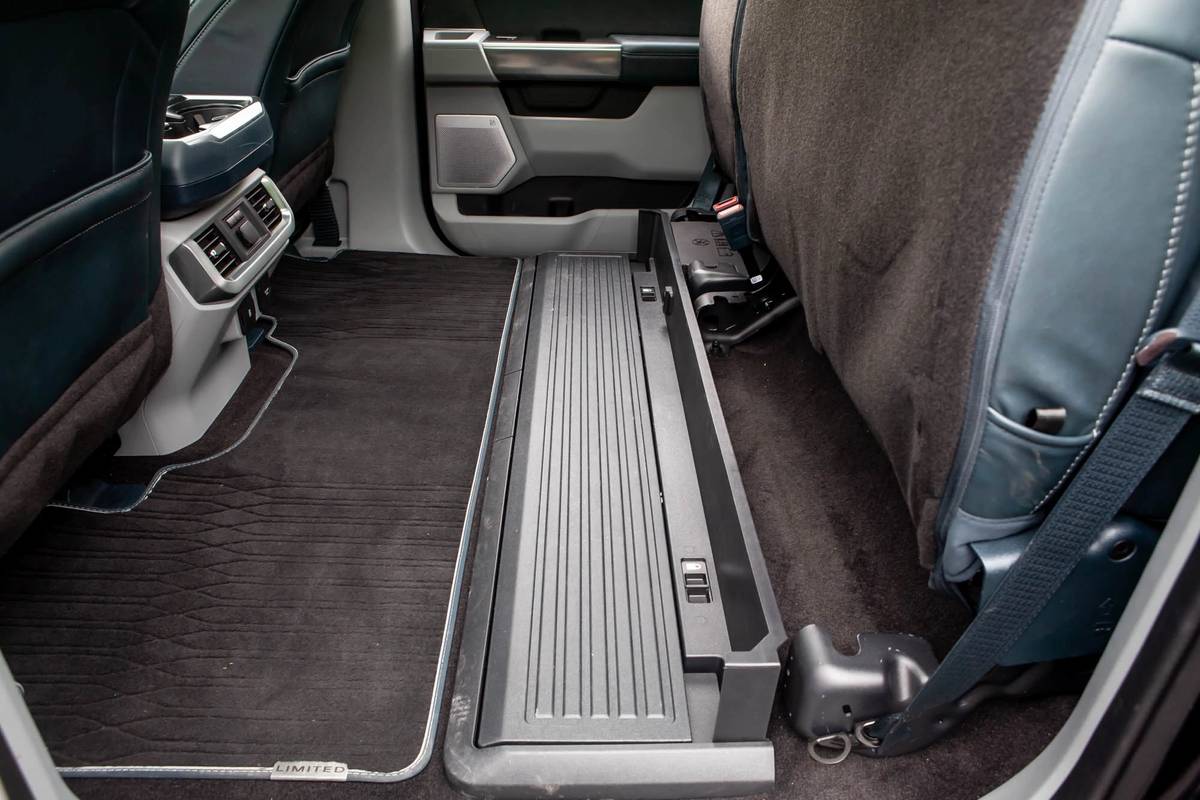 So when I heard, and felt, the bass in a 2021 F-150 with the B&O Unleashed system for the first time, then looked behind me to see an empty cab, I admit I was perplexed. I investigated and did not find subwoofers sunk into the floor pan like our Best of 2019 Genesis G70 or the kick panel like the FrontBass system that debuted in the 2013 Mercedes-Benz SL-Class roadster — both of which were innovations of Harman Kardon, a sister brand of Bang & Olufsen Automotive under Harman International, a parent company recently acquired by Samsung.

Instead, I was experiencing something called ECS: Externally Coupled Subwoofer, a patented feature shared by either of two B&O systems in the F-150 (also added to the Ford Mustang Mach-E). Our Limited has the more elaborate of the B&O rigs available. The lesser eight-speaker choice, called the B&O Sound System, is offered as an option or in packages in higher SuperCab and SuperCrew body styles. The B&O Unleashed system, with 18 speakers and almost twice the amplifier power, is available only in the SuperCrew and is standard in the Limited trim. I haven’t had the opportunity to audition the more modest system, but it appears to include the same ECS, which is the most groundbreaking aspect of our Limited’s Unleashed system.

It turns out that the Externally Coupled Subwoofer is essentially an infinite baffle configuration, whereby the woofer, which measures 13.2 inches by 7.5 inches, has no cabinet at all; it simply vents back through a port in the rear wall of the cab and out into the world. The closest comparison is the example above of a speaker in a car’s rear deck, but in that case (also commonly referred to as infinite baffle), the woofer’s back wave is contained and theoretically tuned by the trunk. With the ECS, it simply escapes, possibly irritating your neighbors.

So How Does It Sound?

As important as the innovation is what B&O and Ford have done with it, which is to use their powers for good. The ECS provides nice, deep bass that’s well controlled rather than boomy and fatiguing. I listened to all variety of acoustic and electric bass music, drum tracks and hip-hop, and only once or twice did the reproduction sound a little fat where the source material didn’t call for it.

What’s more, the bass can be felt more than in most vehicles nowadays, which is a decent sign of how low it goes. As I usually say, you could do better with a custom aftermarket job, but there’s no way you could do that without sacrificing a hell of a lot of interior space, and given the performance you get from ECS, I don’t know why you’d bother.

Before I examine the issue of leakage with the ECS, let’s not forget how impressive the rest of the system is, especially for the driver. Note that my evaluation was of the Unleashed system; the lesser B&O Sound System has the ECS, a 3.1-inch midrange speaker in the middle of the dashboard, 1-inch tweeters in each A-pillar, a 6x-by-9-inch midwoofer in each front door and a 6.3-inch full-range speaker in each rear door. 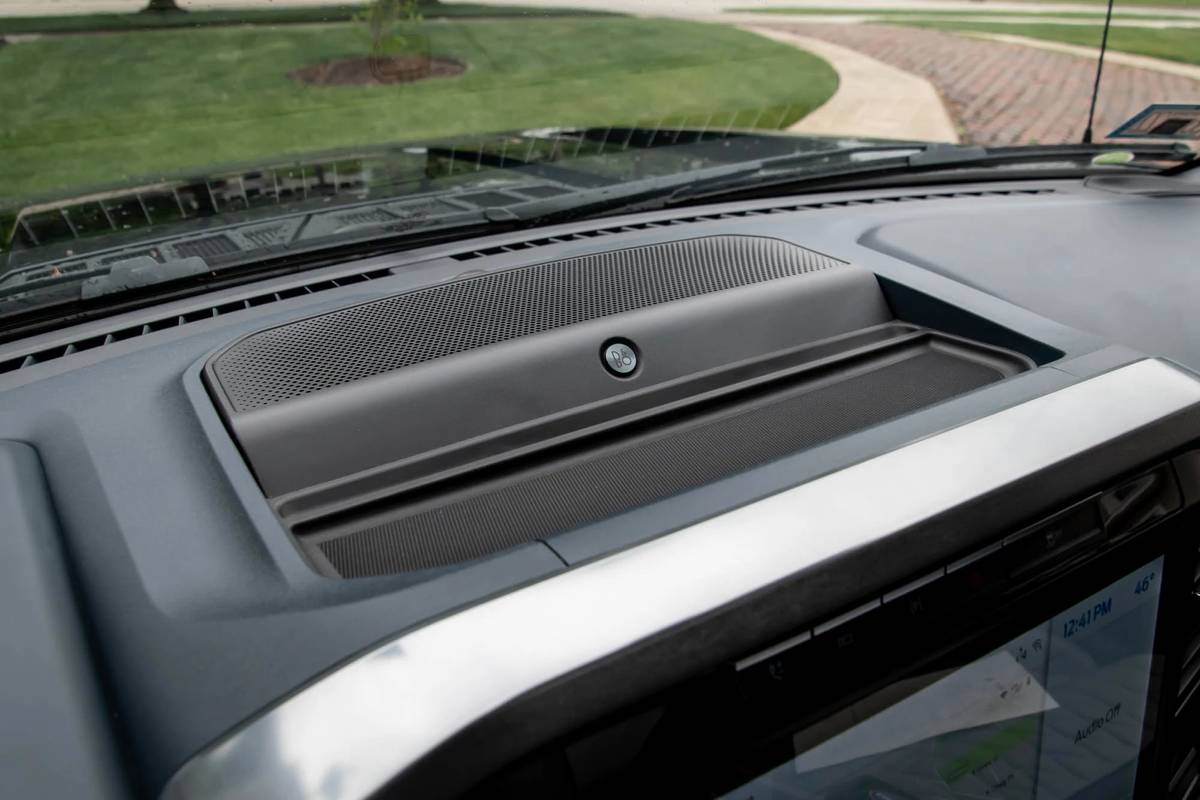 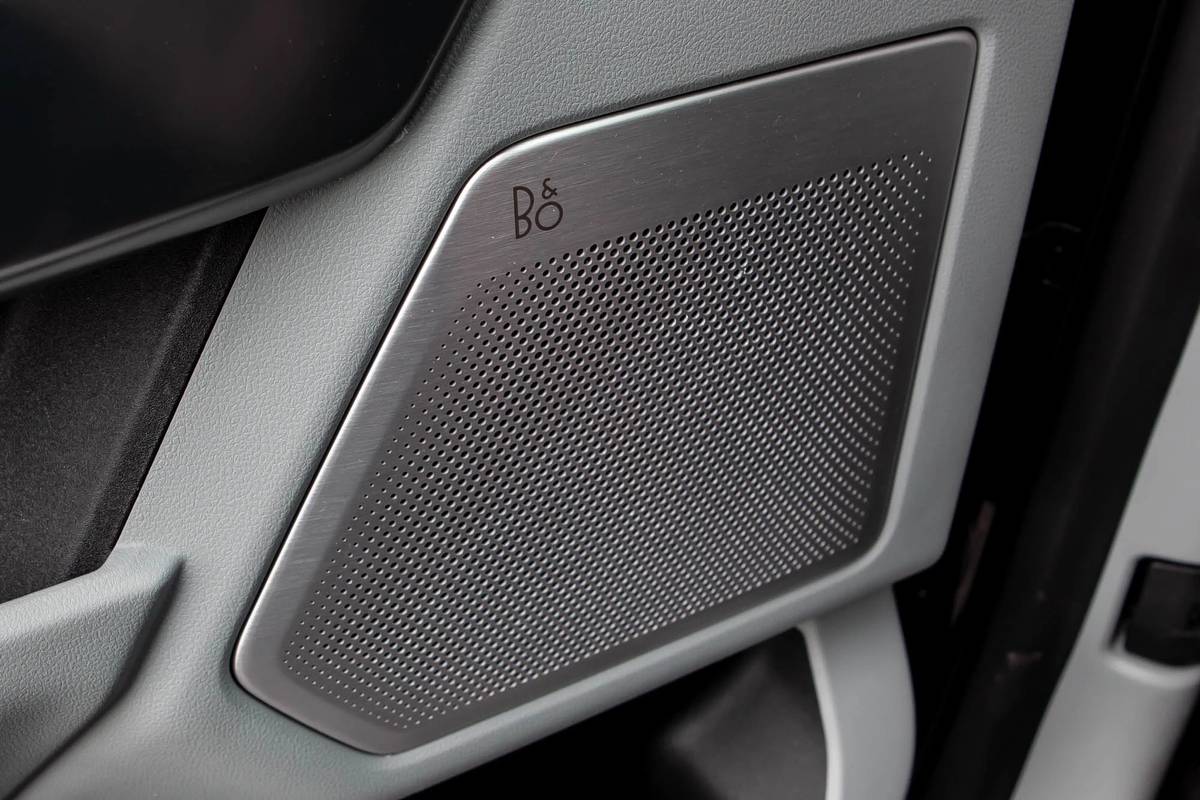 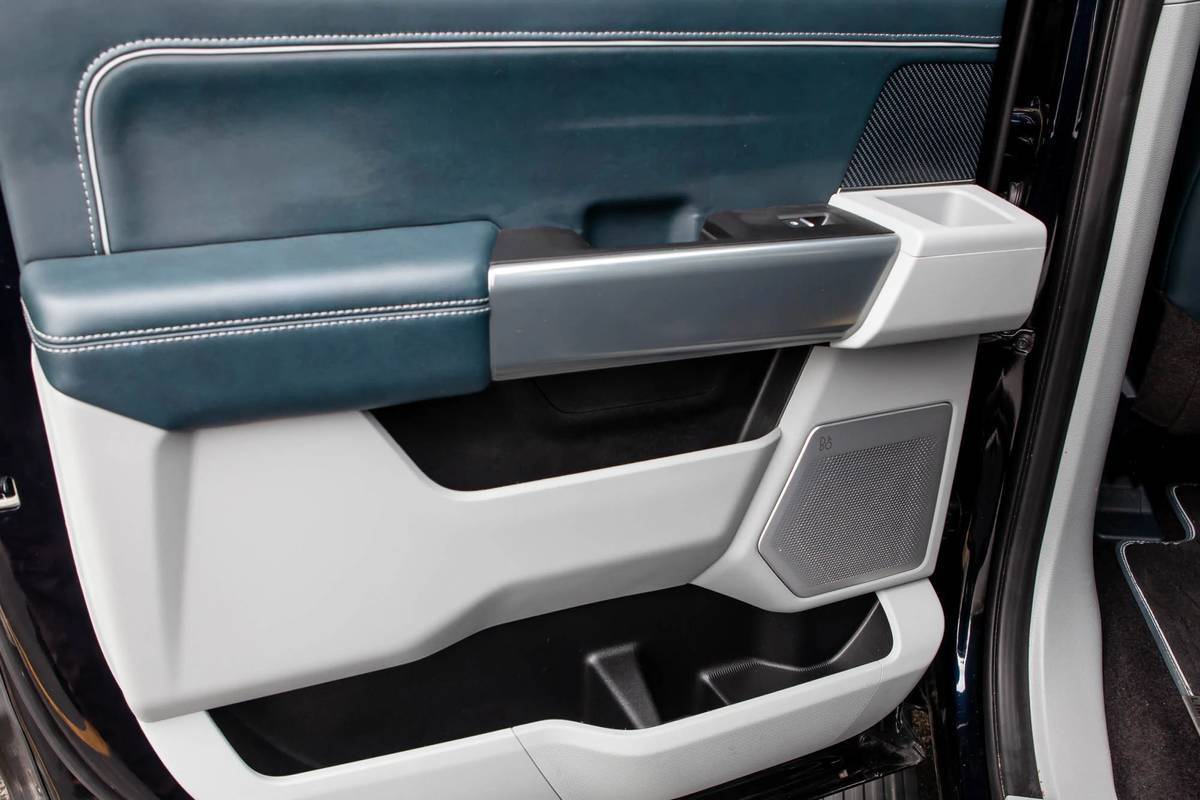 The Unleashed system adds another 3.1-inch midrange on either side of the top of the dashboard, upgrades the 6.3-inch rear door speakers to coaxial types and adds six 1.6-inch accent speakers: one in the ceiling over each front occupant and two in each of their head restraints.

I know this sounds gimmicky, but it proves not to be. To be clear, when it comes to speakers, more doesn’t always mean better. For one thing, their output can interfere with each other if the system isn’t properly designed, so when you see high numbers, it’s best to assume marketing is behind it and proceed with caution. The B&O Unleashed system exhibited no such transgressions. The effect from the overhead and head restraint speakers is exceptionally subtle; it adds some dimensionality when you switch the sound mode from Stereo to Surround, but it doesn’t mess with the front soundstage too much. This entire audio system is an exercise in restraint I seldom find in vehicles. 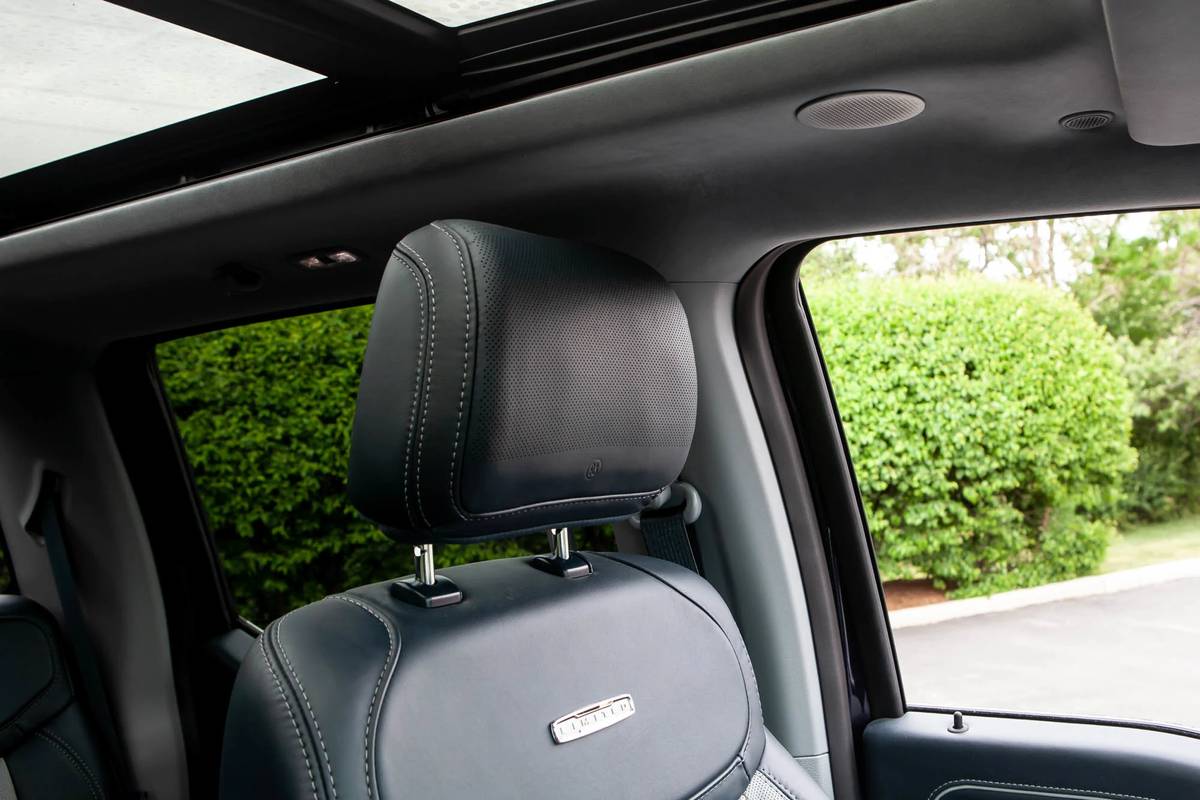 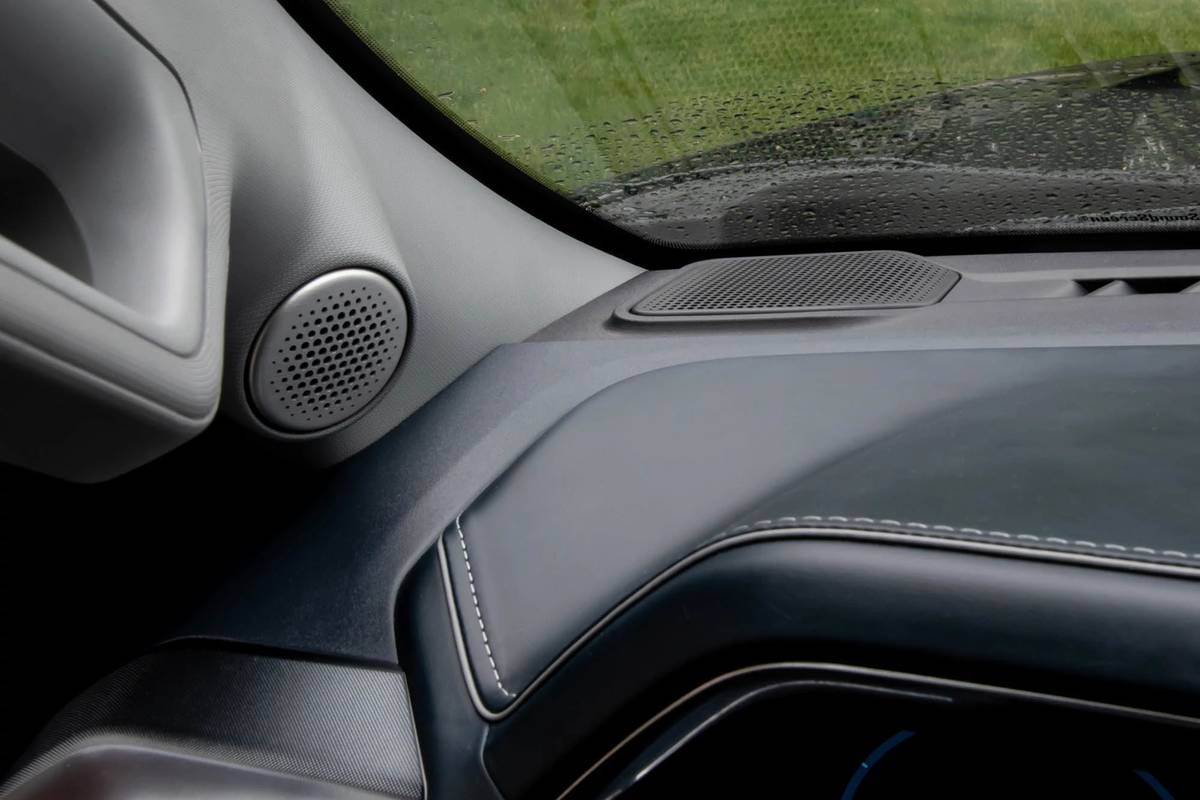 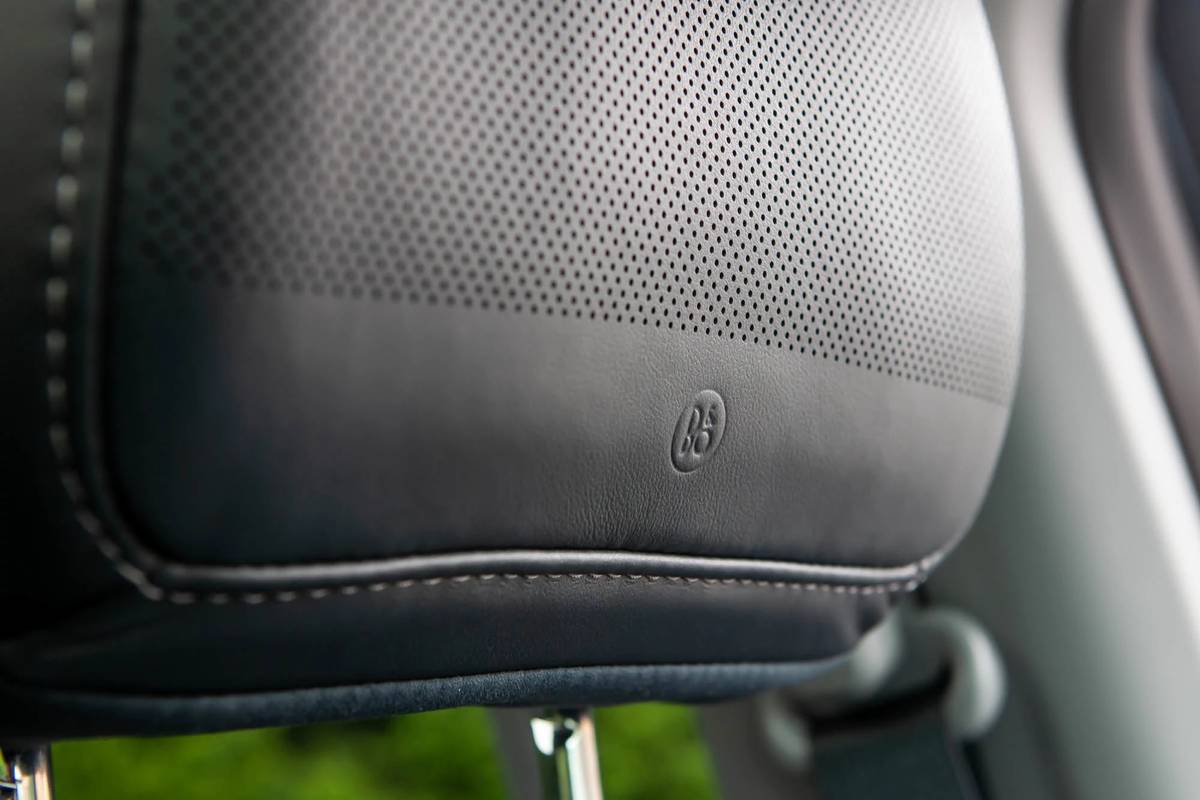 I can’t believe I’m saying this, but B&O could have included more controls to let people dial the effect up further. However, it seems like the engineers insisted on not letting people do anything stupid with their thoughtfully designed system. The controls are limited to the sound modes mentioned along with traditional treble, midrange, bass, balance and fader sliders. That’s it, apart from the speed-compensated volume selection.

One control I find myself wanting when it’s not present is independent control of the center-speaker level. That’s the case here, merely because the acoustic center image is under the rearview mirror or slightly to the right of that, and I prefer it biased more in front of me. For what it’s worth, I tried the balance control to move things leftward, which is usually where the tonal quality and/or imaging fall apart in factory car stereo systems, and the B&O Unleashed held up reasonably well. Once again, I was impressed. Perhaps having the three matching 3.1-inch speakers across the dashboard, which the B&O Sound version does not, allows this simple adjustment to do what it’s supposed to. 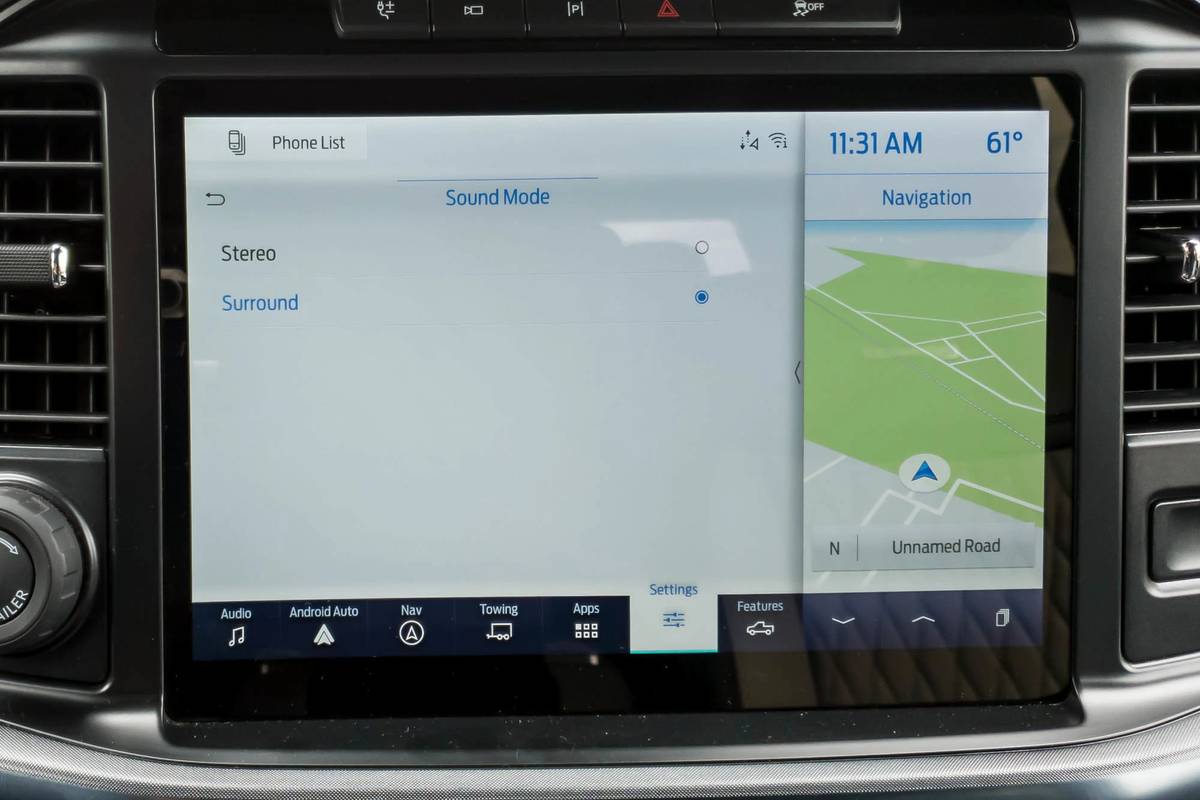 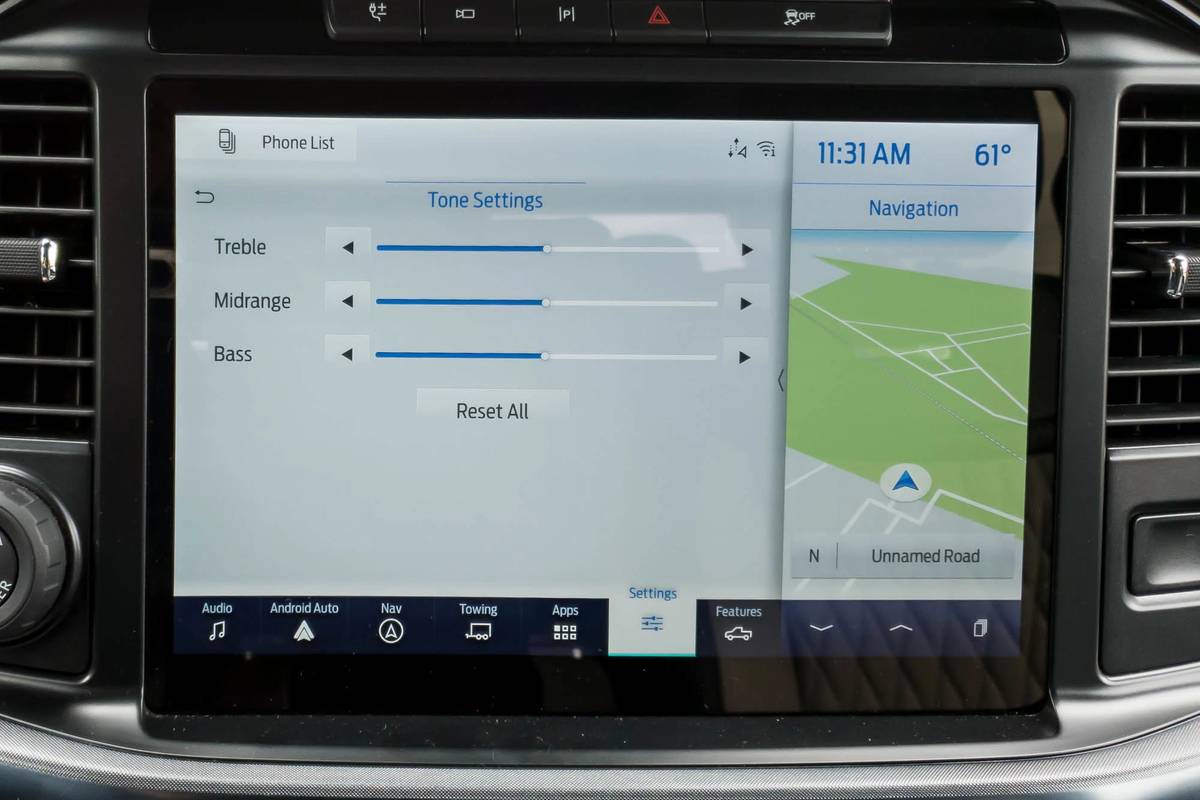 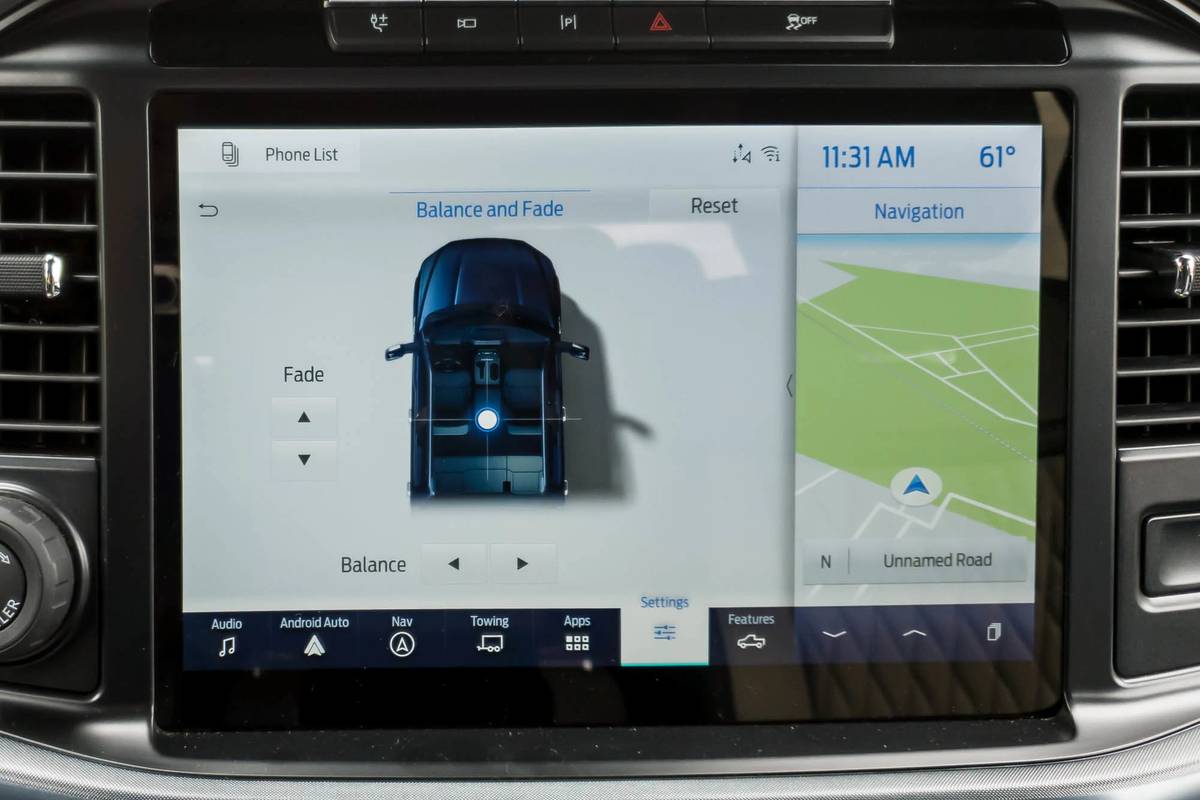 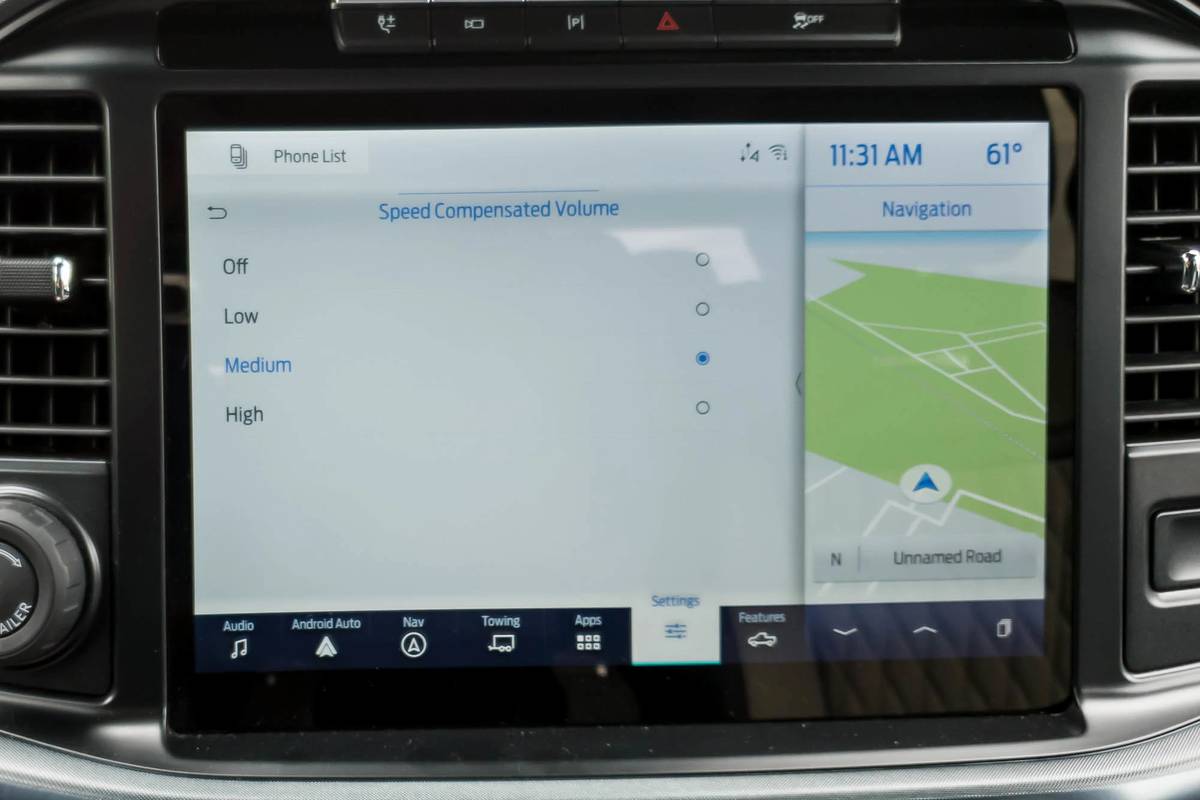 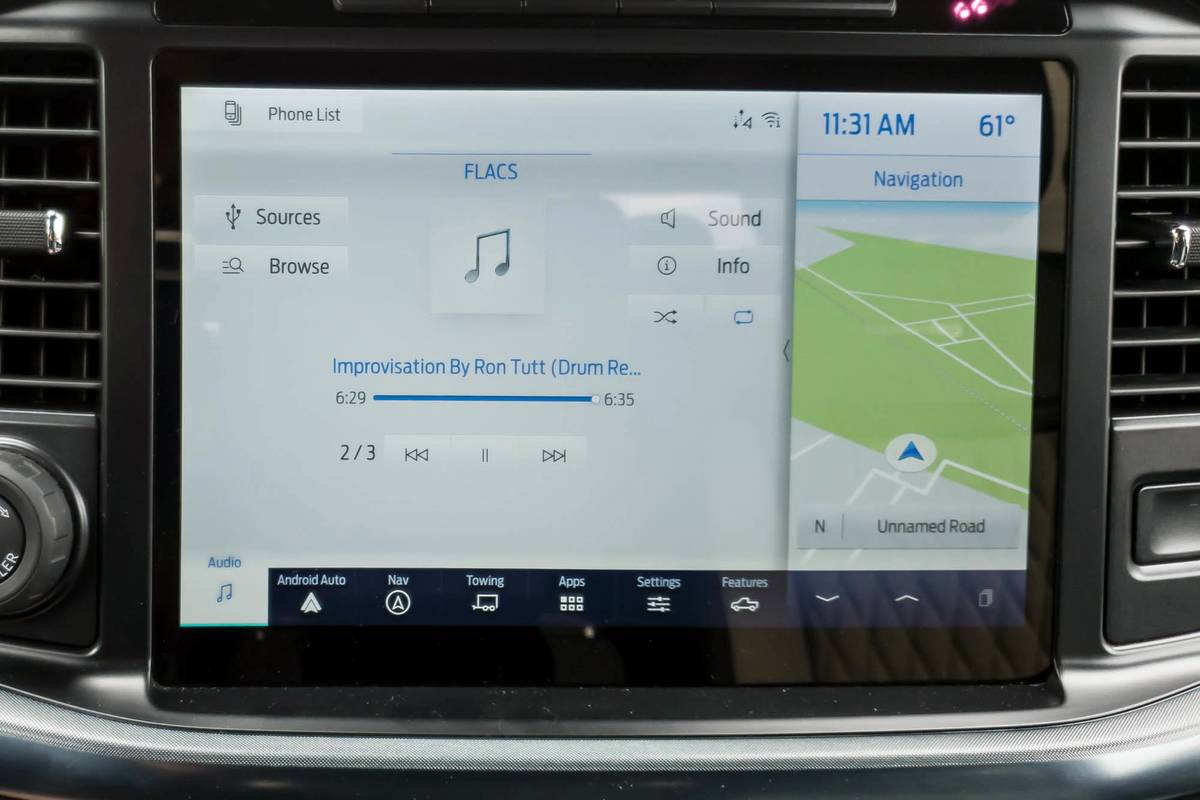 Overall, I’d rate the system’s soundstaging as pretty good. For most people, this isn’t as important as the frequency response, which is great. So is the detail of the reproduction and the system’s ability to hold itself together at high output. As always, I predominantly played lossless audio files (lacking a CD player) to remove from the equation any potential downsides of perceptually coded formats or streaming. All evaluation was with the ignition on to ensure adequate amplifier voltage and full output.

My overall experience was that of any exceptional system — always lingering in the driveway to hear more of what’s playing, finding different things to play and wanting to dig deeper to see if there are any faults. (Weak systems don’t require as much attention.) So I decided to try the other seats, where performance often degrades, especially in terms of dimensionality.

The Other Positions, Plus the ‘Rumble Seat’

As I feared, the spatial rendition isn’t as good in the front passenger seat as it is in the driver’s. Though the sound is coming from in front of you, it’s spread wider here, and my attention was drawn to the center and right-side speakers where in the driver’s seat it was more of a proper soundstage arrayed at eye level. Switching between Stereo and Surround made little difference in this regard. Fortunately, the tonal response is still very good here and in the rear seats, which make no real effort to provide proper staging (as is the norm). The rear door speakers do a good job filling in and that’s about it. But this is the second time I appreciated the restraint in B&O’s approach with the surround speakers in the ceiling and head restraints. If they had gone overboard with that, it would have muddied the sound in the rest of the cabin.

It was during this experiment that I realized the F-150 with B&O might mark the first time passengers might call dibs to sit in the center rear seat, not to avoid it. The ECS is mounted directly below and behind the center position, and though it doesn’t make its presence known visibly, suffice it to say anyone who sits in this seat is going to be very aware of it — especially if you’re playing bass-heavy music loudly. Yowsa!

About Venting Bass Frequencies Outside …

My immediate concern about the Externally Coupled Subwoofer’s design was that it ported as much low-frequency energy outside the vehicle as it does inside. I let the system play bass-heavy content loudly and crawled all over the outside of the truck, including the bed right behind the cab, and I was surprised to find nothing exceptional. It just sounded like a vehicle with a stereo playing loudly inside. Honestly, I heard more coming from the doors than the subwoofer, which might have something to do with the aluminum sheet metal’s comparatively low mass (which is why Ford chose it).

Overall, I’m very impressed with the F-150’s B&O Unleashed system on many levels, but probably with the ECS most because it appears to mitigate one of the biggest challenges in mobile audio. Sadly, I was too rushed in my time with the Mustang Mach-E to pay any attention to the audio, but someday I hope to audition ECS in that model — and to see (and hear) a lot more of it in the future.