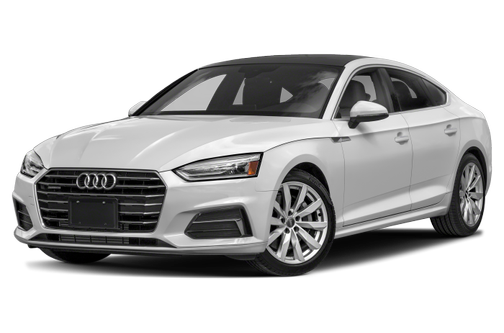 Our 2018 Audi A5 trim comparison will help you decide.

The verdict: The A5 successfully combines the key ingredients of a luxury sports coupe: style and performance.

Versus the competition: The A5 really needed this redesign, and its improvements in performance, technology and luxury put it among the class leaders.

Redesigned for 2018, the Audi A5 coupe looks similar to the previous generation, but don’t let that fool you — the A5 is improved in many facets and better than ever before.

The two-door Audi A5 shares a lot of mechanical similarities with the four-door A4 sedan, which was redesigned in 2017 and recently took home the crown in our Luxury Sports Sedan Challenge. This was a big leap for the A4, which placed fifth out of six contestants in the previous Challenge in 2013. The A5 had to wait an extra year to get its redesign, but the changes mimic what was done to the A4, and that’s an excellent place to start. Compare the 2018 A5 with last year’s model here.

The A5 Coupe competes with other compact luxury coupes, like the BMW 4 Series, Mercedes-Benz C-Class coupe and Infiniti Q60, and the A5 Sportback. Compare the A5 with those cars here.

The Audi A5 comes equipped with a turbocharged 2.0-liter four-cylinder engine that’s a mainstay of the Audi lineup. It makes 252 horsepower and 273 lb-ft of torque, and it comes tied to a six-speed manual or seven-speed automatic transmission. My test vehicle came with the automatic transmission and all-wheel drive, which is standard on all A5s.

I’m a big fan of this engine, which punches above its weight on the spec sheet and is very responsive. I even liked it in the large Q7 three-row SUV, so in this application it more than does the trick. The coupe is very responsive to accelerator inputs, especially in Dynamic mode, and it accelerates quickly at all speeds.

My test vehicle also came equipped with an adaptive suspension, which is a $1,000 stand-alone option. Adaptive suspensions are among the components I wish were more widespread, especially in cars with a performance focus. An adaptive suspension allows a car to have a dual nature: comfortable when desired and firmer for sportier moments. The A5 isn’t an out-and-out performance machine like the S5, so offering it with a setting that allows for better cruising makes a lot of sense. Our Chicago-based editors warned that they drove an A5 with the optional sport suspension, which isn’t adaptive, and it was too firm for their embattled roads.

If the A5 Coupe falls short in one area, it’s steering feel. Even moving the A5 into Dynamic mode — which also increases throttle sensitivity and tightens up the suspension — doesn’t cure this. It does add more weight to the steering, which is nice when traveling straight, as it helps keep the car going straight with less effort, but there’s still some disconnect between the driver and the wheels.

Fuel-economy figures for the new Audi A5 are an EPA-estimated 24/34/27 mpg city/highway/combined for the hardtop coupe. The manual loses 1 mpg on the highway. Premium gasoline is required.

Does It Come With Instructions?

The new Audi A5’s interior also apes the best parts of the A4: high-quality materials, excellent fit and finish, and a big emphasis on technology. The rather comprehensive Prestige Package ($7,600) adds heated front leather seats, LED headlights, an upgraded sound system, a head-up display, 360-degree cameras, navigation and Audi Virtual Cockpit, a large color screen that serves as your instrument panel (separate from the display mid-dash).

There’s a lot of technology in the Audi A5 (especially with the Prestige Package), but using it can be cumbersome in some cases. For example, Android Auto and Apple CarPlay come standard, which is good. But the A5’s screen (as is true in many Audi models) is mounted high up on the dash and out of reach, and it isn’t even a touchscreen. So to use those systems, which have clearly been designed for touchscreens, you have to resort to the multifunction rotary dial controller. As with many of the A5’s technology features, the functionality is there, but getting to it can be a chore.

Virtual Cockpit replaces the instrument panel with a 12.3-inch display that’s highly customizable: The tachometer and speedometer can be shrunk to open a larger display area showing things like vehicle status or your choice of map or Google Earth views. Interestingly, though, if Android Auto is activated, the Google Earth view and navigation map views are disabled and you’ll see only a large, comparatively useless compass in the virtual cockpit.

Ultimately, none of these quirks were deal-breakers for me; the system is fast and responsive to inputs, minimizing the nuisance of having multilayered menus. The other technology additions are welcomed additions and the inclusion of a 360-degree camera system (even on a smaller car like this) is always welcome.

If there’s a weakness to the Audi A5 interior, it’s backseat room. The car’s low-slung proportions make it a tight squeeze back there, and while there’s enough space to navigate the legroom issues if both passengers collaborate, the larger issue is headroom. The roof fed into the rear window right where my head sat (I’m 5-foot-11), impeding headroom. I had to slouch a bit to feel comfortable and not worry about the top of my head bonking the glass if we hit an unexpected bump.

Trunk volume is 11.6 cubic feet, slightly below the A4 sedan’s 13.0 cubic feet. While the cargo area isn’t very tall, it is deep, so it swallows up luggage nicely. Dropping two segments of the 40/20/40-split rear-seat also allowed me to fit three golf bags in back, which nicely matched the number of occupants who could still fit inside.

My test vehicle came equipped with a Driver Assistance Package ($1,800) that added adaptive cruise control (which operates to a stop), lane keep assist, high beam assist, blind spot detection and traffic sign recognition. Audi’s systems work as advertised. The lane keep assist operates subtly under most circumstances, keeping the car centered in its lane, not merely correcting after it strays.

There was one feature, however, that I was not ready for: The adaptive cruise control works with traffic sign recognition to power a feature Audi calls Predictive Control. When activated, the system changes the speed of the adaptive cruise control when it detects a change in the speed limit. So if you’re cruising along at 65 mph and pass a sign dropping the speed limit to 45 mph, the system adjusts accordingly. There are ups and downs to this system, which I detail here, but I’d leave it turned off the vast majority of the time; managing speed is something I still like to do myself at this point.

The 2018 Audi A5 starts at $43,775 including destination, but my test vehicle gleefully tacked on options to bump the as-tested price to $55,300. Additions included the two big option packages mentioned (Prestige Package and Driver Assistance Package), as well as Glacier White Metallic paint ($575), an adaptive suspension ($1,000), Dark Brown walnut wood interior accents ($350) and a heated steering wheel ($200).

There are many times when these heavily optioned luxury vehicles don’t feel as though they match up to their lofty price tags, but the Audi A5 was the opposite for me. Interior materials are up to snuff, performance is impressive and technology is plentiful. My only hang-up would be a preference for the added utility of an Audi A4: greater passenger and cargo room, with analogous performance. Either way, though, you’ll end up with a winner.

2021 a5 PREM Plus; B&O 7th audi I've owned & they just keep getting better. Not a fan of the tap every time screen I want to do something feature which is fairly new. This one could be a keeper! The stereo is very high quality & handling rocks, quick & nimble. Sport suspension is a personal choice, always order it. Stiffer but smooth. Car is quite. Sport seats heated, heated mirrors, heated steering wheel. Need I say more?

Beats almost everything else

Although I'm quite biased to Audi for a multitude of reasons, the A5 is absolutely perfect. Jam packed with features. I'm extremely impressed with the virtual cockpit. Currently 3 years old any person could look at the exterior, open the door, sit down in the passenger seat and think this is a 2022. My personal favorite thing about Audi is how well they do with their legacy. Every car in their lineup ages so well.

I have loved the car.

I love the car. It is sporty, response, quiet, comfortable to drive. It has been a great car. I have used it to travel from SoCal to Nevada and Utah. I am able to use my hands free and the sound is so clear.

Rating breakdown (out of 5):
1 person out of 1 found this review helpful. Did you?
Show full review
See all 82 consumer reviews

All model years for the Audi A5 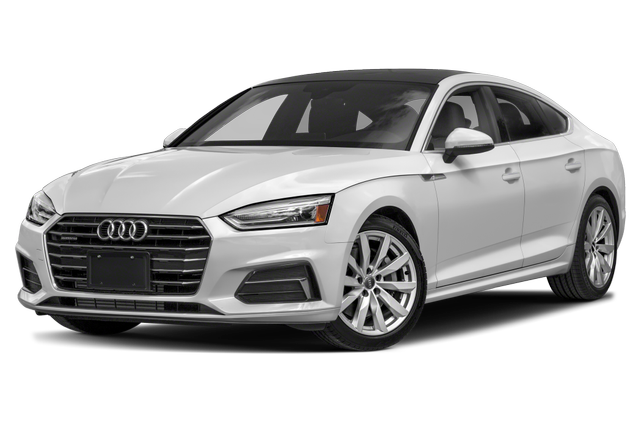 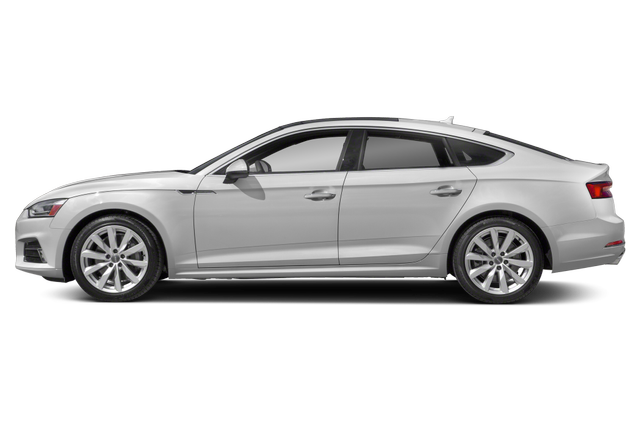 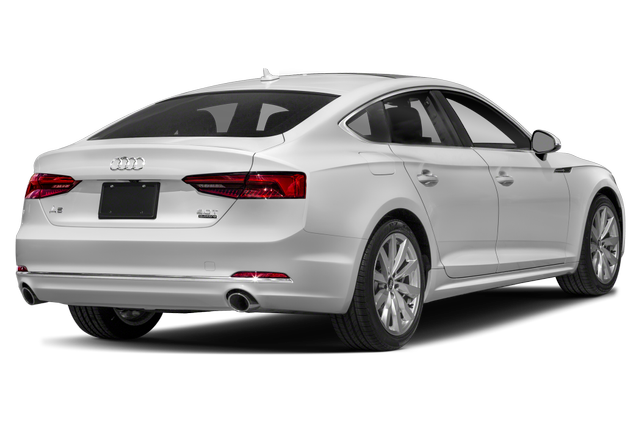 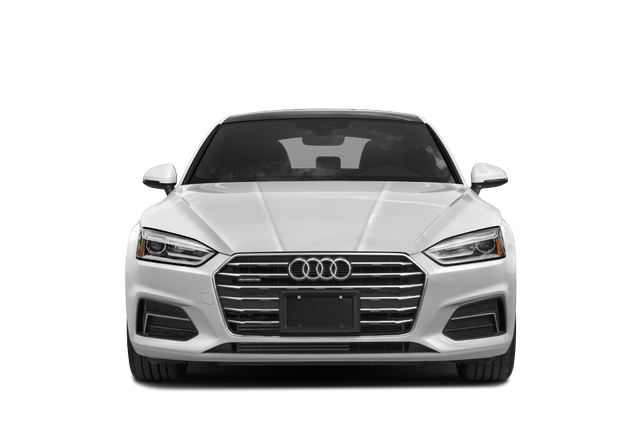 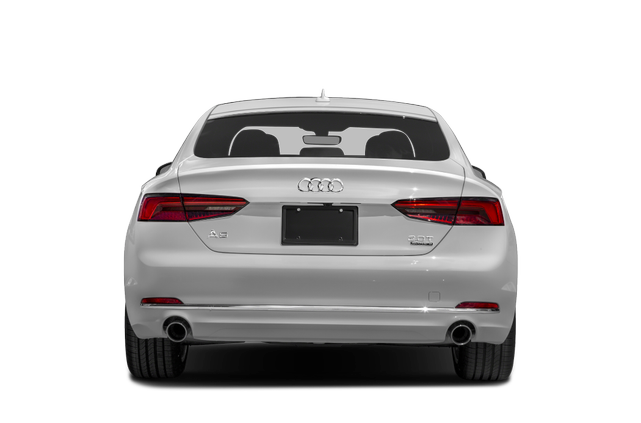 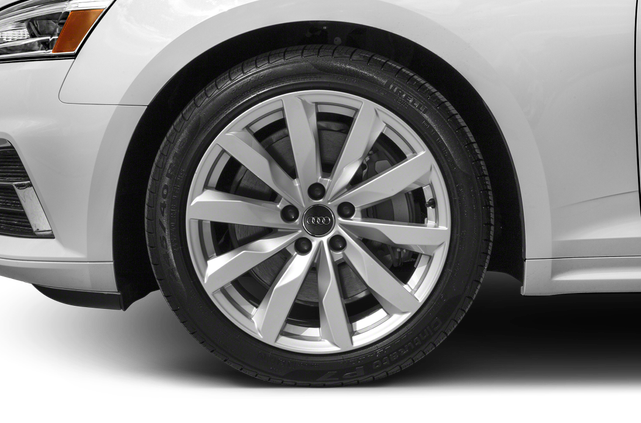 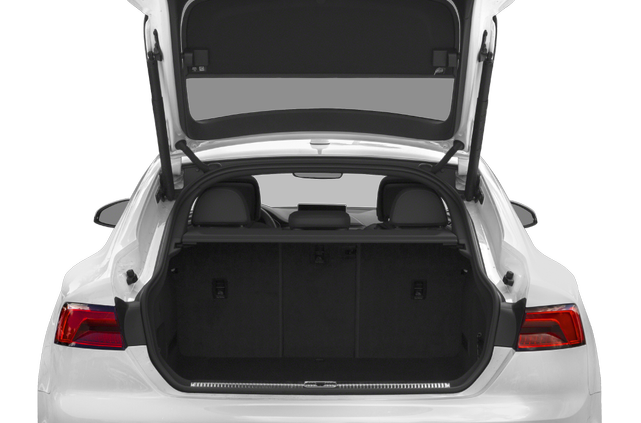 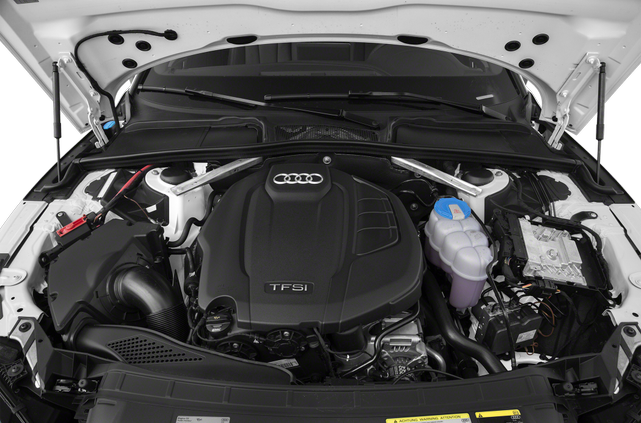 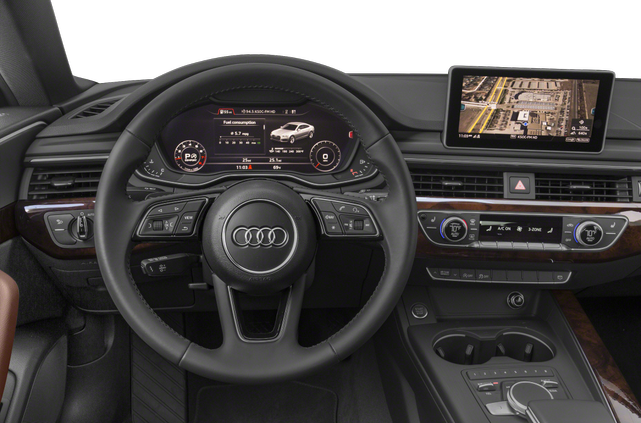 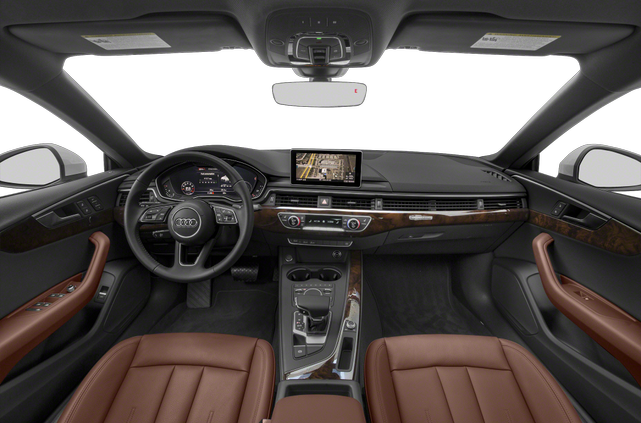 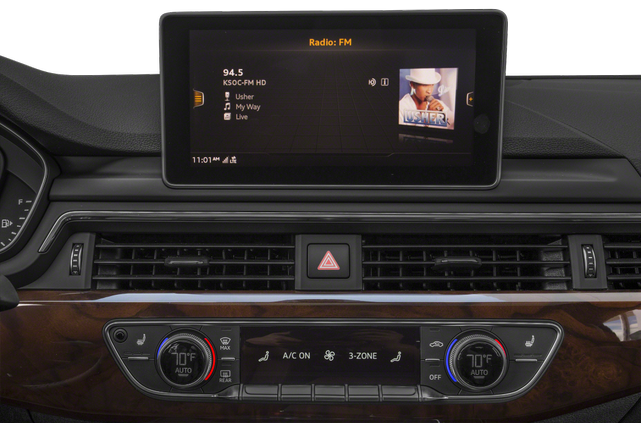 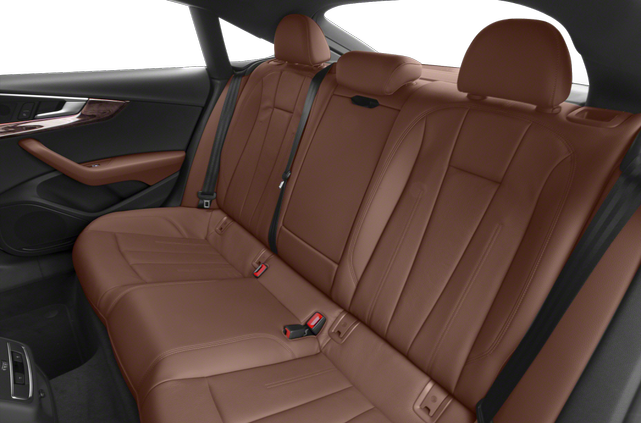 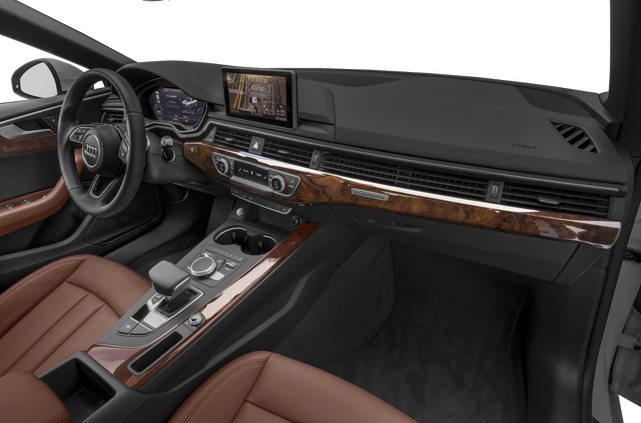 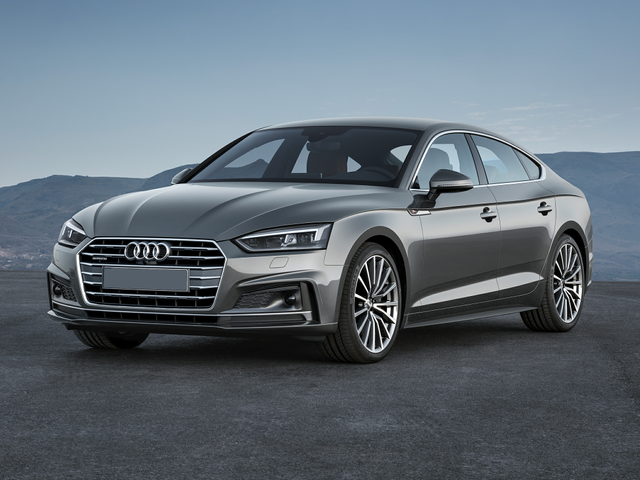 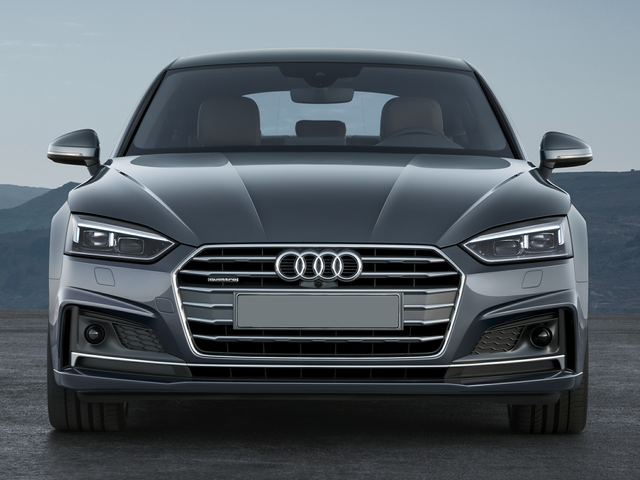 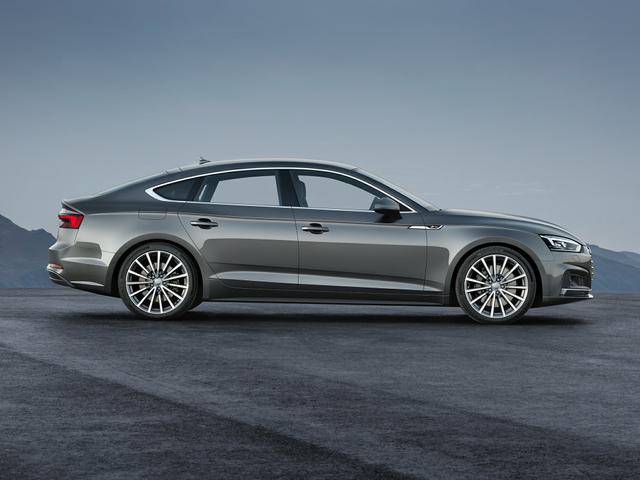 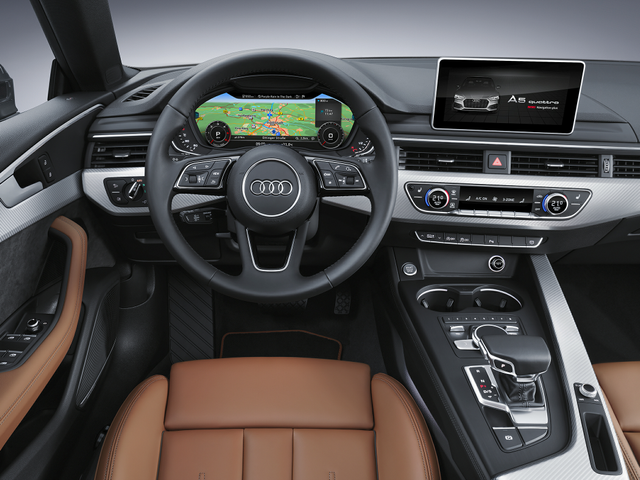 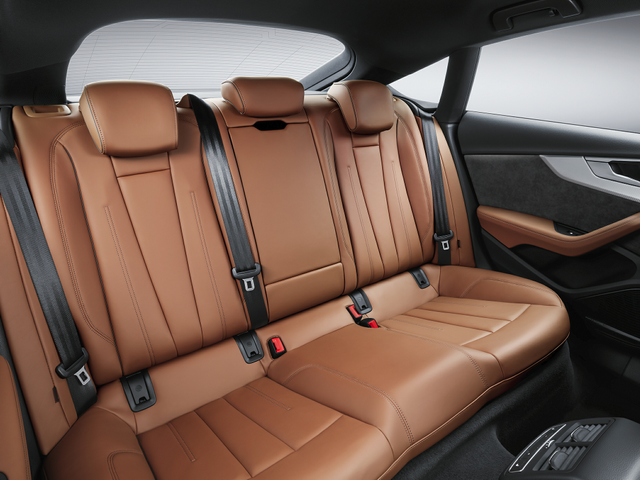