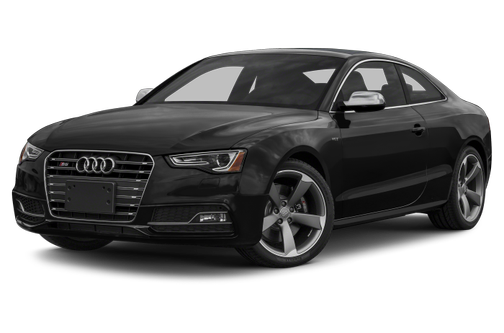 Our 2013 Audi S5 trim comparison will help you decide.

The performance-oriented four-seat S5 and its layman sibling, the Audi A5, are aimed straight at their fellow two-door heartthrobs: the BMW 3 Series and Mercedes-Benz C-Class. Both the S5 coupe and S5 Cabriolet (convertible) are powered by a 333-horsepower, supercharged V-6.

In addition to the new engine for the coupe, the S5 gets a redesigned front bumper along with a new grille, hood, headlamps and LED daytime running lights. There’s also a restyled rear bumper. On the inside, the Multi Media Interface controls have been restyled, and there are new chrome accents. The newly available Audi Connect telematics system uses 3G cellphone technology to enable Google Maps satellite-image overlays, real-time gas prices, weather information, news and Wi-Fi service for up to eight devices.
Exterior
The S5 is instantly recognizable as an Audi, with the brand’s customary wide-mouth grille flanked by lower air intakes. The car looks downright angry, thanks in part to angular headlights. Exterior features include:

Interior
The S5’s dashboard has a broad dome that overlaps the gauges and central information screen, which incorporates the optional navigation system. Interior features include:

Under the Hood
The S5 has a supercharged 3.0-liter V-6 that makes 333 hp and 325 pounds-feet of torque. Mechanical features include:

I bought this car for the look & performance (more powerful than the A5). Cockpit layout is fantastic and the craftsmanship is impeccable. Enjoy the ventilated front seats which has kept me cool during the heat of this past summer. Smooth handling and acceleration. #Audi #S5 #Cabriolet #Supercharged

Save the Manual.. If you can find one.

July 8, 2020
By Anthony from Sicklerville
Owns this car

This car is best driven with a manual. too bad Audi dont make them anymore. The performance of the current DCT in them are great, but you are not engage with the beast, you cant replace that with paddle tapping.

A great car to drive long distances with. A lot of different modifications available. I really like how comfortable the seats are and the power delivery with the supercharger is great!

All model years for the Audi S5