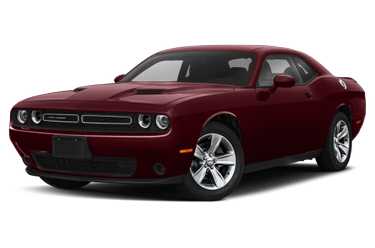 Love my 2021 scatpack challenger. Every friend so

May 20, 2022
By Her Name is Nickellette from Irwin Pa
Owns this car

Love my 2021 scatpack challenger. Every friend so far I took for a ride became a believer. Car hugs the road and begs to go faster just too dangerous. Had her up to 122 had to back off because I was not on a track but back road. She is triple nickel silver with the bee stripe across the trunk. I am in paradise! Nice Family ride is why I bought this car!!

My husband bought a Challenger RT Scat Pack and is total in love. Car performs excellent and has lots of room in the trunk for all kinds of items. The back seat is small and not really ideal for guests. Overall, an excellent vehicle to drive and own.

Coming out of a brand new 2018 Challenger GT Blacktop package, I decided to buy a 2021 GT Blacktop package. Both were AWD, both are ridiculous in winter weather, and both have averaged 27 in day to day. This is by far the most comfortable and well planted big coupe I've ever owned. Hugely comfortable. Lots of interior pluses. And the looks are great. Retro yet refined. I side stepped and bought a 2022 Jeep Compass - brand new - and traded it in after 12 DAYS for the 2021 Challenger GT AWD with 4800 miles. Why? Because this was so much more car for the $$. Plus I'm averaging the same if not better MPG with a 303 HP V6 vs a 171 HP MPG 4 cylinder. Extremely higher passing power. No hunting three gears down for passing (even then I was hoping not to underestimate). Yeah I took (a little hit) on the new Compass on trade, but I thought to myself "what would I rather drive" for the next 6 years? $$ notwithstanding, this car is twice what the Compass was. Why be miserable for 6 years? So there it is. Most comfortable and competent AWD vehicle I've every owned (X2).

I recently purchased a 2021 Dodge Challenger Scat Pak 392 from Granger Motors in Granger Iowa. I had been looking and debating about buying another 392, (I had the 2016 Plum Crazy Challenger Scat Pak automatic prior to this purchase). I regretted not keeping my 2016 and really wanted another Scat Pak. The driving experience is a blast, they are so much fun to drive. They have all the wanted luxuries, heated seats, high output headlights, decent sound system, etc. The only negative for me is the tires are too small, but that can be easily rectified. As for the luxuries it’s the power, sound and handling that I enjoy the most. Don’t get crazy on me, it’s a straight-line car, not a sports car. So, for what it does, it’s perfect. After reading about the dis-continuation of the Hemi and the manual transmissions, I decided I’d better buy sooner than later. They still had a few 2021 6 speed manual transmission Challengers in stock at Granger Motors. When I called, Robin Kluesner picked up the phone and the rest is history. The Granger team stuck to their, conditions and quoted price. The entire transaction and process took less than 30 minutes and I was in my new car. It was a seamless transaction! There were no surprises, gimmicks, etc. This included: Financing, additional warranty options and all needed paperwork. I live in the northern part of Arizona and flew from Phoenix to Des Moines Iowa to pick up the car. It was mid-February and the weather was suspect at best. I hated driving it through the mush, snow and gag me, salt in Kansas. But we made it in one piece and by the time I reached Oklahoma, it was smooth traveling. Point is, Granger Motors was and is awesome. They stand by their product and are true to their word. I would highly recommend their sales team, credit team and in general their company. I would not hesitate to buy another vehicle from Granger. If your wondering, I went from Plum Crazy to Knuckle White, (Vanishing Point), LOL. Sincerely Mark K

Rating breakdown (out of 5):
2 people out of 2 found this review helpful. Did you?
Show full review
3.7

June 17, 2021
By Pissed off and disgusted from Sebastian Florida
Owns this car

Absolutely love this car. I just don’t want the defective version. Has serious issue with the 8 speed automatic. Internal defect causing it to bang on start up . Now it’s clunking while driving. Yes , we still have this car because FCA says it normal. Off to court we go. Really shameful for a multi billion dollar company to conduct business this way. Gator Dodge should have stepped up and go us a new car. That’s what we paid for.☹️

June 3, 2021
By Dkalpen from Cincinnati, Ohio
Owns this car

I've owned a 2015 SRT 392, 2019 scat pack narrow body and now a 2021 scat pack widebody and am happy with all three. But the widebody with the wider tired and suspension upgrade is my favorite of them all. Every time i start her up I get excited and that's the best feeling in the world.

Most Awesome Car I’ve Ever Owned!!

This car is a dream! I just love it!! It looks fabulous and drives like a dream! Ordered everything that was offered and don’t regret it at all! I’m a lucky girl!!

The R/T 1320 comes with line lock, trans brake, launch assist, drag radials, active suspension dampening, beefier rear axles, the same shocks, springs, sway bar used on the Challenger Demon. The car has a Jekyll/Hyde personality. Just cruising around the car is mild mannered and get's 21MPG. Press the "Drag Mode" button and the fun begins. I have tried the 0-60MPH timer on the street, it did it in 3.7 seconds. I know it will get a little quicker with lower tire pressure, cooler temperatures and more break in miles.

Best Performance Vehicle for the Money

May 14, 2021
By IitzDeputy from Hendersonville, NC
Owns this car

This car met all of my wants for a performance vehicle with a great price tag. Can’t beat 485hp out of the gate. I’m looking forward to upgrading the vehicle and getting even more horsepower in the future! I would highly recommend this vehicle to anyone I know.