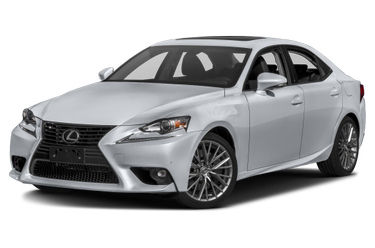 Bought a2016 IS 300 Sport AWD from Carvana. Was "L- certified" ( Lexus officially certified pre-owned ). It has been WONDERFUL ! Great car and very good value for the money! Fast little sedan that handles EXCEPTIONALLY well ( also has all-season performance tires ). The one little drawback, it likes trips to the pump and you can ONLY put super-premium gas in. although if you drive like a normal person, your usage is actually not that bad. IF you like to drive a little "sportier" than your going to use a wee bit more! Overall I am VERY pleased. it rides very, very, very well. stable and responsive but not a chore to navigate with. The wide tires make it a little bit noisier, but it's a sweet ride. a few times I opened up ( on deserted straight stretch roads! ) to almost 97mph ( uh oh..maybe I shouldn't have admitted that!) and it was SMOOTH. This car drives really well. I absolutely love it. I'll have the service intervals done at my local Lexus dealer, and the maintenance has been reasonable so far. VERY PLEASED!!

February 2, 2020
By AndyB from Richmond
Owns this car

September 19, 2019
By FutureTrunks1 from Connecticut
Owns this car

Is an amazing vehicle. Quiet for long trips but switch it to sport mode and you feel like you are in a sport car, no joke. Lexus are the top of the line in reliability so you can't go wrong on that either. The interiors are amazing. I have the FSport edition and this one offers red seats and black top and bottom.

Very sporty ,great on fuel mileage , stylish and quick. Would recommend this car for daily commute or long road trips. The price is right for a second used car.

I’ve owned this car for 3 years now and I love it,

August 5, 2019
By Joseomhm from Springfield, Mass
Owns this car

I have the IS300 this car is sporty, drives excellent the interior is very luxurious. I find it very comfortable, most of the time is me and my wife.

I love to drive this car and love the style of it.

I love everything about this car. Comfort , style, performance, safety features and that it's all wheel drive. I love the color and the style of this car. I'm very happy with it so far.

Sporty and fun, plus the build quality of Lexus

This car is a joy to drive, has all of the exciting new features you could ask for, and never seems to have any issues.

Fast, sexy, fun. Not as luxurious as other models but it’s a sports car. It’s worth the trade off. The price was much lower than expected as well

I leased this car because I have wanted one of these since the original one came out. I was originally looking for one that was older, around 2011 year model, but Lexus had a lease deal that was too good to pass up. My first impressions were great, it was good looking, fast, and felt really solid. I received something in the mail to give a review, but I didn't feel like three months was acceptable time to review a car. I have had the car 3 years and I just returned it. I didn't buy it out right and ill explain that. It started with the dealership experience, when I was younger, I worked for a Toyota dealership that treated their customers fantastic and I expected an upper echelon Toyota dealer to be better at this but unfortunately not. Ill talk about price first. It was priced a little much for what you get, and the service that you need to do is expensive. Getting an oil change is about $150 which is required by the lease to be done by Lexus every 10000 miles but it is the same price for the inspection that happens on the 5000 mile increments. Having owned a Toyota previously, I had it serviced at Toyota and the oil change was a fraction of that. Quality of the car was excellent. The only issue I had was with the brakes. The squealed almost the whole time I had the car. It was loud. Embarrassingly loud. I had it tiered all the way up to Lexus Corporate but all they would do is provide new pads, I had to pay for all the labor. Needless to say they got back a squeaky car. This car wasn't the only IS that I heard with this problem. The awd system performed excellent, the few times I drove it in snowy conditions, it never felt like I was slipping or about to be out of control. The suspension was great, it rode nice and handled excellent. The manual mode in the gearbox felt allot better than I expected and I enjoyed playing with that quite a bit. I was quite pleased with the mechanics. I would say the only gripe I have is that when I needed to pass something or just speed up a little, quite often it would kick down too many gears and tear off like I floored it with just breathing on the throttle. Not a deal breaker but kinda weird. Now to the inside. The seats were excellent, even the rear had enough room for passengers to be comfortable. The front buckets hugged me nicely and the heated option worked great. The HVAC was decent, the touch panel for the temp was a little touchy but cool to show people how to adjust it. The cup holder and storage area is very lacking, the center console and glove box was too small and oddly shaped. I think the cup holder area is better than the previous models but the size provided wouldn't fit a camelbak bottle and neither would the spots in the doors. The infotainment system is lacking also. The radio controls were awkward but that was something I knew when I got it based on reviews of Lexus in general. I think they have fixed this recently and I got a loaner that was a year newer and there were small improvements to some of the tech in the car. One of the gripes I have regarding the tech is that the car came with remote start in the app that you get for the first year for free but after that it is very expensive compared to other car company apps. I also was not told how to remote start the car from the key fob even though it does but only while the app is active. The keyless entry was only touch on the two front doors while other Toyotas that were older have it on the rears. The only problem with this, is that if I wanted to unlock only the driver door, I would have that programmed to do so but if I had a passenger, I would have to unlock the doors from the inside. I had mine set to unlock all. Another cost that isn't known is that some of the options are customizable, but you cant change them from the menu and you have to have the dealer do it. The dealer offered this once for free but there was a charge every adjustment after. There are quite a few cars where you have more adjustability on your own. The seats fold and the trunk fits quite a bit. All in all this was a very nice car, I would probably buy a newer used one or the one I was initially looking for or even an original one. These are very sporty and on the small side. I needed a truck, but I wouldn't have purchased this particular one because of my disappointment dealing with the brake problem anyway. We were planning on purchasing it but after a while we decided not to.

Rating breakdown (out of 5):
2 people out of 3 found this review helpful. Did you?
Show full review